April 18, 2006:  I was having a good day today, phone calls, business activities, post office, bank, etc.  Then I called the airport to see about the price of AVGAS.  The tanker truck was on the way, and the price goes WAY UP later this week.  I also checked in with a co-worker to discover why I did not see any emails from him yesterday -- it was a company holiday.  (The new guy is always the last to know.)  I really have to program all those dates into my calendar in Outlook.

I had things under control with my various job assignments for today, so I finished my important calls while enroute to the hangar to get the "Enterprise" out for a quick trip to the Collegedale Airport to fill the fuel tanks with 100LL before the price increase later this week.  After putting in 29.6 gallons, I was on my way back to Wendell's field to clean up the airplane.  Here is a quick photo on the ramp before I put N2PZ back in the hangar.  Wendell's Aeronca Champ normally sits up front by the hangar door, so I get to move it every time I go flying.  The Hobbs meter added another 0.5 hours.  And yes, I had two additional business phone calls when I was in the hangar cleaning the bugs off the airplane.   I also mailed my aviation insurance premium today for the coming year.  April 27,2005 was the day I moved the airplane out of the garage and to the airport, and the day my aviation insurance took effect.  This year, the premium is lower due to my 171.7 hours of flying N2PZ in the past year. 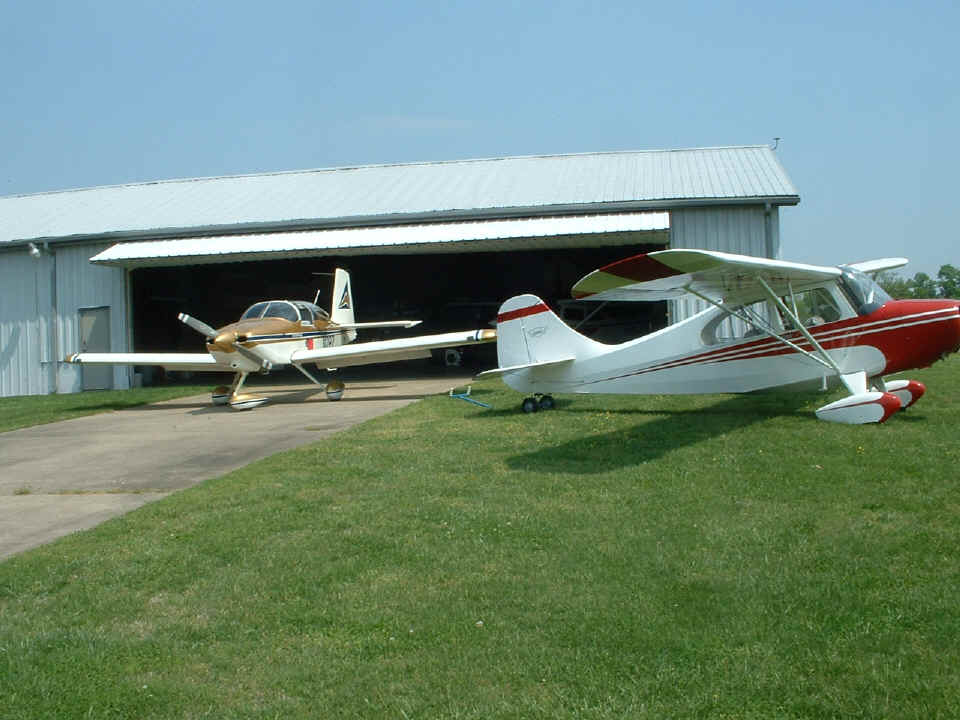 Speaking of Wendell, I went over to his place Monday evening to get his first flight instruments on order.  I helped him pick out the correct part numbers for the items he wanted from Van's Aircraft.  The list included a true-airspeed indicator (MPH/KNOTS), altimeter (inches), vertical speed indicator, whisky compass, two analog fuel gauges, and the resistive fuel float sensors.  We also reviewed the list of engine features he wants and the engine montioring system I have and the part numbers for the options he wants for that.

And a bit of aviation history deserves mention today: April 18, 1942 was the day of the Doolittle Raid on Tokyo in World War II.

One more thing, that large profile blue print of my airplane is still stapled to the wall of my garage (see PAGE 118).  I thought I was going to take it down right after I moved the airplane from my garage to the airport for final assembly.  Somehow, I just felt it should stay up there (until I move someday).

April 19, 2006:  I took some time this evening to dump the GPS track from yesterday's short flight into my map program.  The ground track from my place to the air field is also in there, including a stop at Walmart for a few things.  I think it is obvious that the BLUE track is the flight, and the green tracks are on the ground in my car. 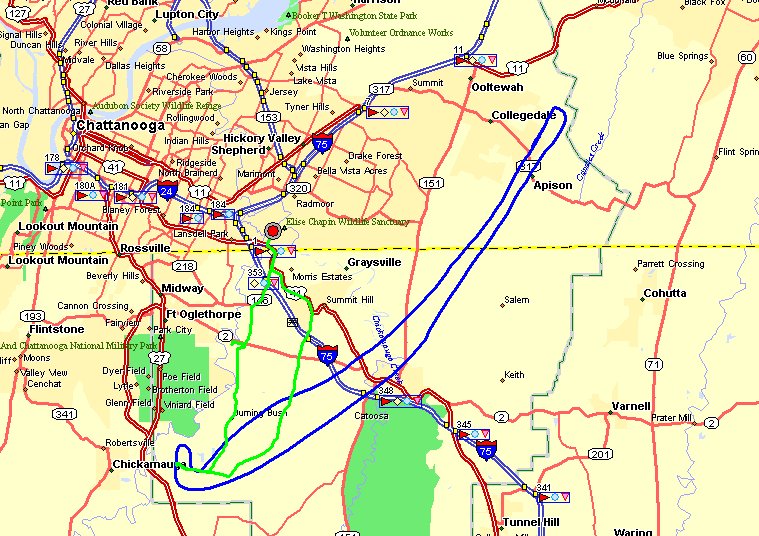 I also had a short visit with Wendell tonight to give him some instructions on work he can be doing while we wait for the next shipment from Van's.  He talked with Penn Yan Aero about an engine today.  The current delivery schedule is only 4-weeks after receipt of order.  My delivery was in the 16-week time frame during the summer of 2004.  He will be ordering the firewall forward kit so he can get to work on the throttle quadrant, cabin heat door, etc.  That kit also includes the master solenoid to let us start wiring and testing things as we get them installed.  The immediate job is to start working with paper instruments to work out the desired instrument panel layout.

April 23, 2006: My usual Sunday posting is again about the work on Wendell's RV-8 on his page 17.   Things are going well and the details are in his section of the web site.  My airplane sits quietly in the corner of the hangar until needed again for flying Young Eagles and the EAA 709 Spring Fly-in coming up May 12-14 at the Rome, Georgia airport.   The big day is Saturday, May 13th.  The P-38 "Glacier Girl" will be there as part of the festivities.  The day begins with a pancake breakfast early Saturday morning.  Camping is available on the field.  Ya'll come now!

April 29, 2006:  Here is a Saturday morning post to advise you of my upcoming flight planning and Wendell's project.  My day job requires that I be in Denver during the week of June 19-23 for a trade show.  That trip is one where the RV-9A can fly there and back and save time and money over the airlines.  The time saving is not having to go to the airport for security check-in and the long drive to Nashville or Atlanta.  The avgas I will use will be less costly than the airline tickets.  I called the Denver Front Range Airport FBO yesteday to learn that the tie-down fees are only five dollars per night.   The good news is the Rocky Mountain Fly-in is the next two days after my trade show ends.  Since my airplane will be there, and the trade show ends at 1 PM on Friday the 23rd, I get to stay over for the big day of the fly-in on Saturday, then head home on Sunday.  It should be a good weekend in Denver!

As for Wendell's project, it is coming along nicely with a couple of milestones in the mounting of the empennage components to the fuselage.  The details are on his PAGE 18.

May 4, 2006:  It has been a rainy week with two nights of NOT working with Wendell on his RV-8 project.  I did help him for a few hours this evening to get the elevator trim cable and the elevator pushrods installed.   Two photos of that work are shown on his page 18 at THIS LINK.

I also took a few minutes to consider an alternate route to Denver for my June business trip and discovered a relatively new airport in Missouri that may serve as a fuel stop enroute westbound.

May 7, 2006:  My usual Sunday morning update finds Wendell with new updates on his PAGE 18 after a session on Saturday afternoon and evening.  I am also answering an email this morning to another builder who is asking about fixed-pitch and constant-speed propellers.  I had posted some comments on this subject on the Van's Air Force forums.  http://www.vansairforce.com/community/showthread.php?t=7430  You will see my post on page two of that forum posting with my signature "n2prise" at the bottom of my entry.  I have reviewed some pages on my web site to find photos showing the performance of a constant speed propeller.  I also provided some observations I made when I went to a fly-in and saw two RV-6's takeoff and climb out from the airport.  The details are in the text from my email reply posted below for all of you to see.

I hope this email posting helps some of you builders out there with that decision about how to equip your airplane for the long-haul performance and resale value.   The constant speed propeller is what gives RV's their full potential with whatever engine is mounted up front!

May 14, 2006: I flew down to Rome, GA (KRMG) yesterday (13th) to check out the EAA chapter 709 Spring Fly-In.  The big activity for the day was the Pancake Breakfast followed by a presentation from the team that recovered the P-38 "Glacier Girl."   I came in late as the last of the breakfast crowd was departing.  Mike Stewart was there with his Super RV-8.  A light rain shower had crossed the field just as I was landing.  You can see the results on the windshield.  Glass panels dominate his instrument cluster. 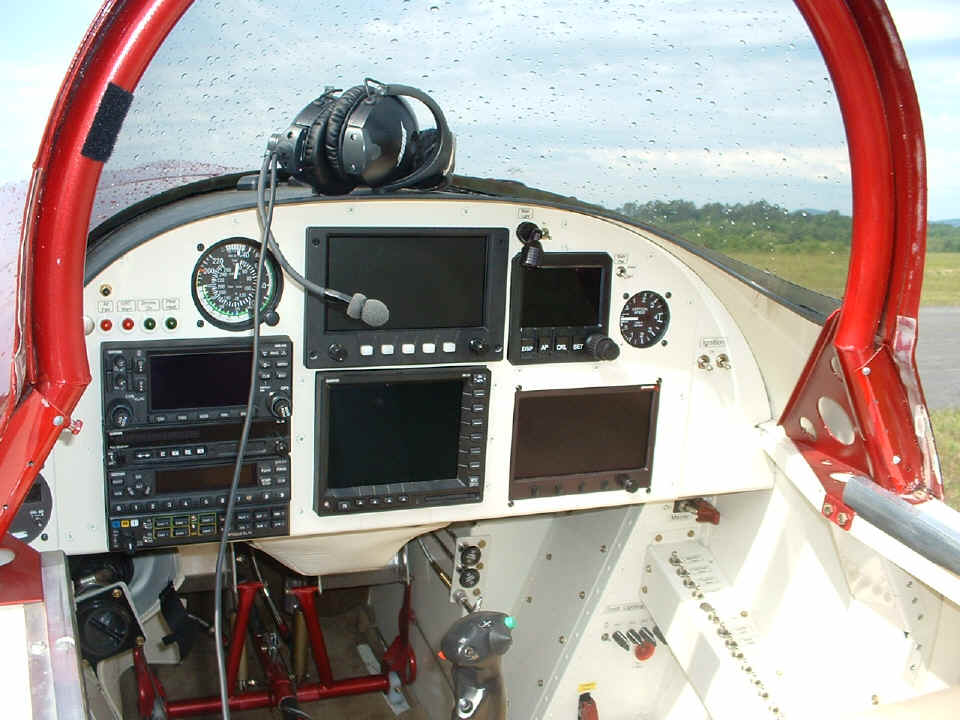 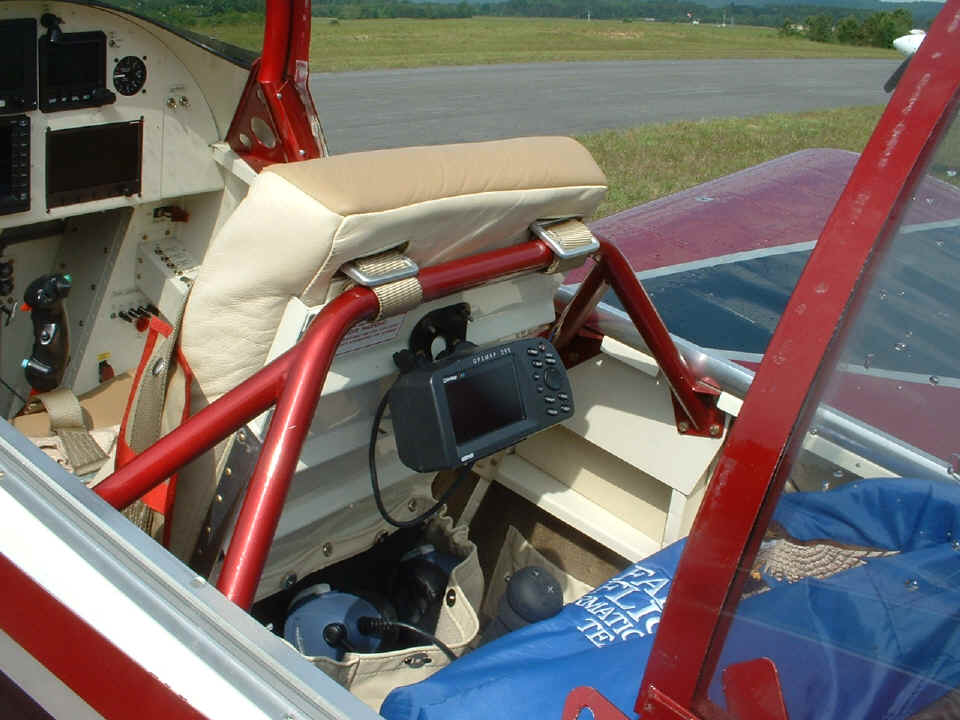 Since I was late getting there, it was not too long before Mike headed back home.  That longer cowl hides an IO-540 engine and a smoke system. 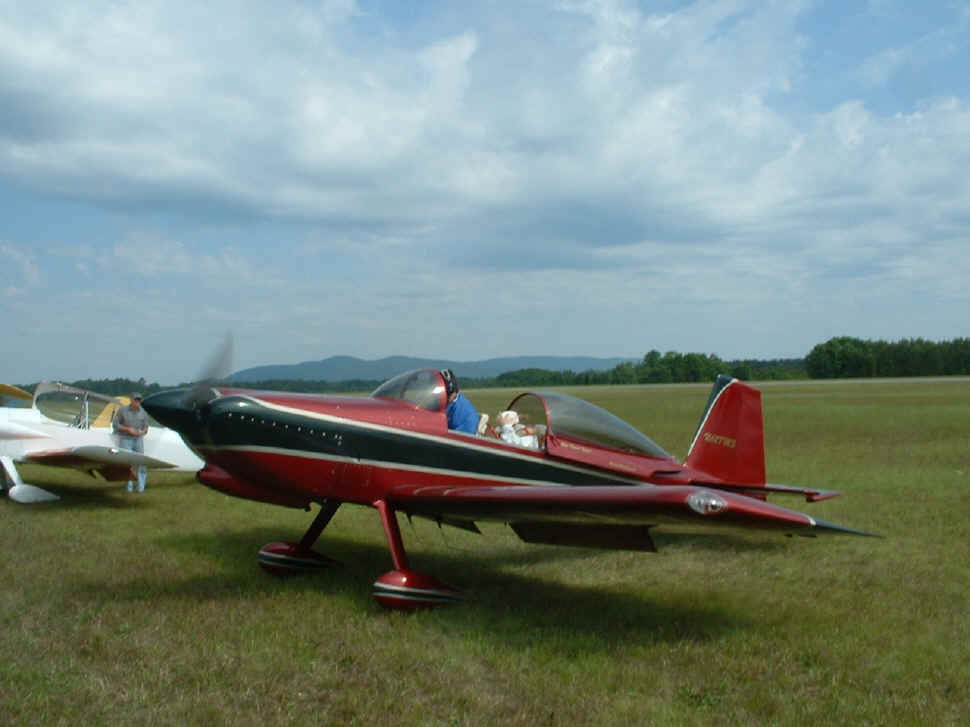 There was a small sampling of different aircraft types by the EAA Chapter 709 facilities near the end of an abandoned runway here at KRMG. 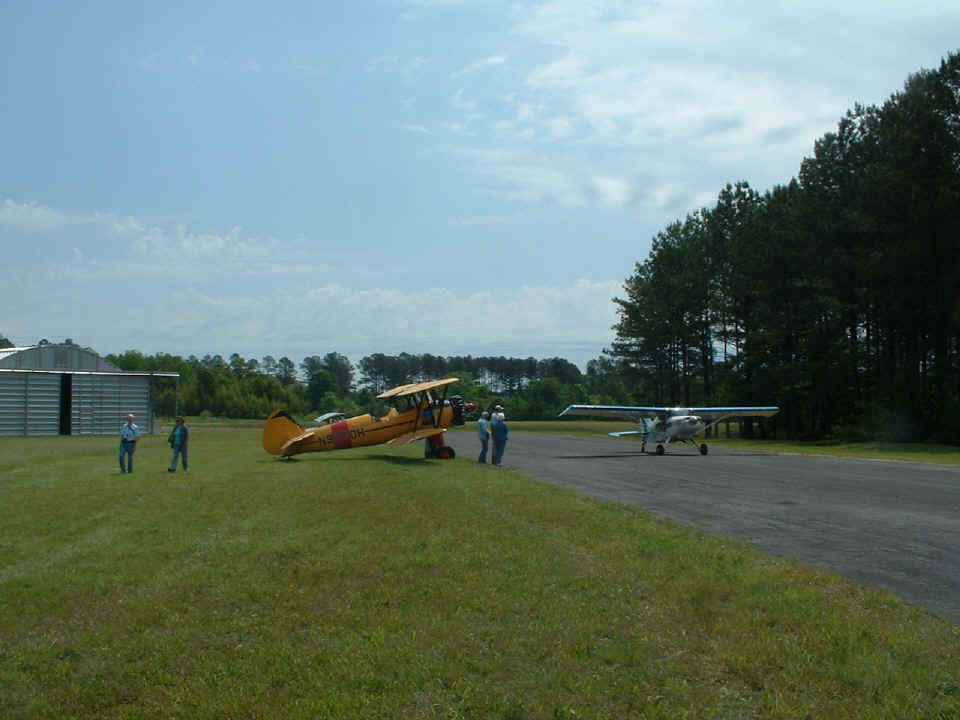 All types of fixed-wing aircraft were there, from this ultra-light to two different types of Piper Comanches.  That Cessna 172 behind the people is a classic early 1960's model still wearing the original paint scheme and logos.  The Cessna pilot was flying "Young Eagles" from a local boy scout troop during the day. 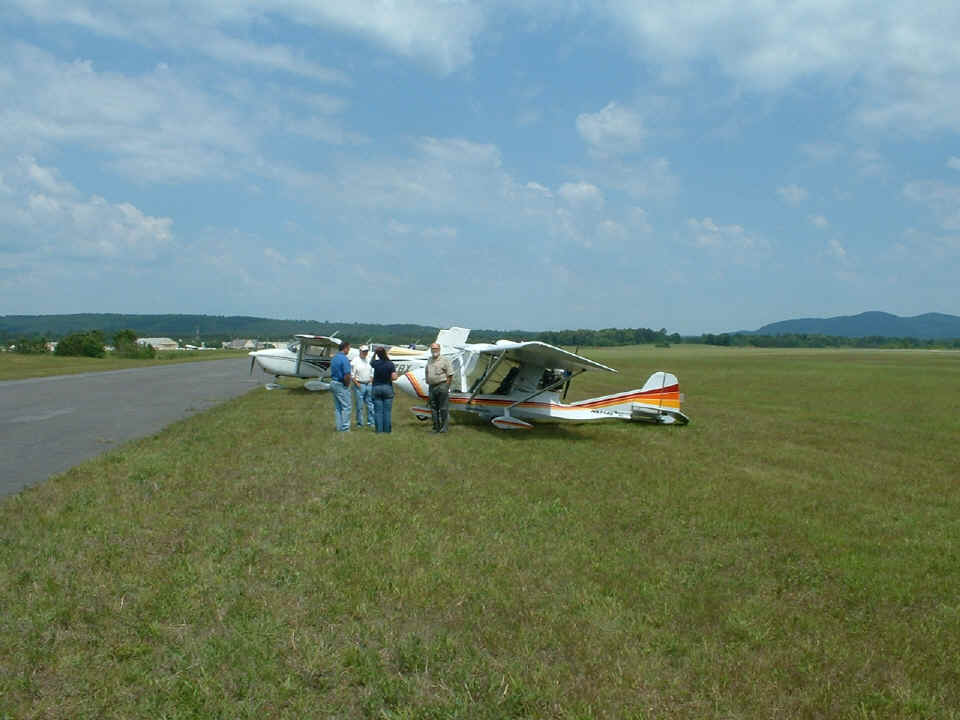 The chapter had their pancake breakfast and lunch on the picnic tables under that shed.  The building behind the blue Citabria is the club house.  Back in the trees is another chapter building with showers and flush toilets.  They have nice camping facilities for events like this one. 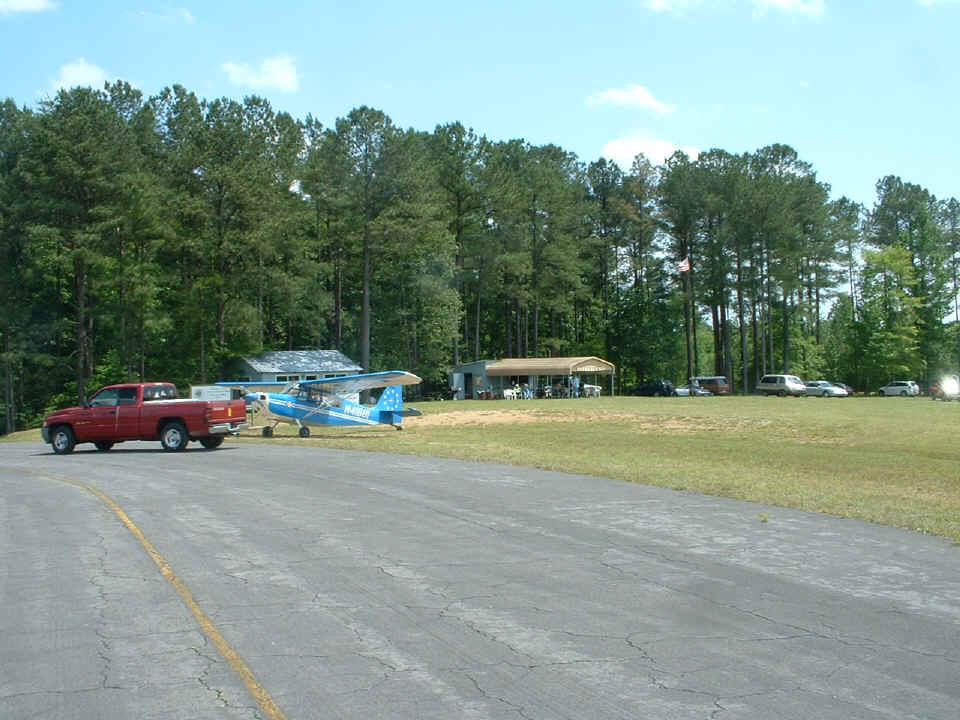 This classic Peitenpol belongs to RV-8 builder John Myers.  John flew it in from his Flying M Ranch just across the state line in Alabama. 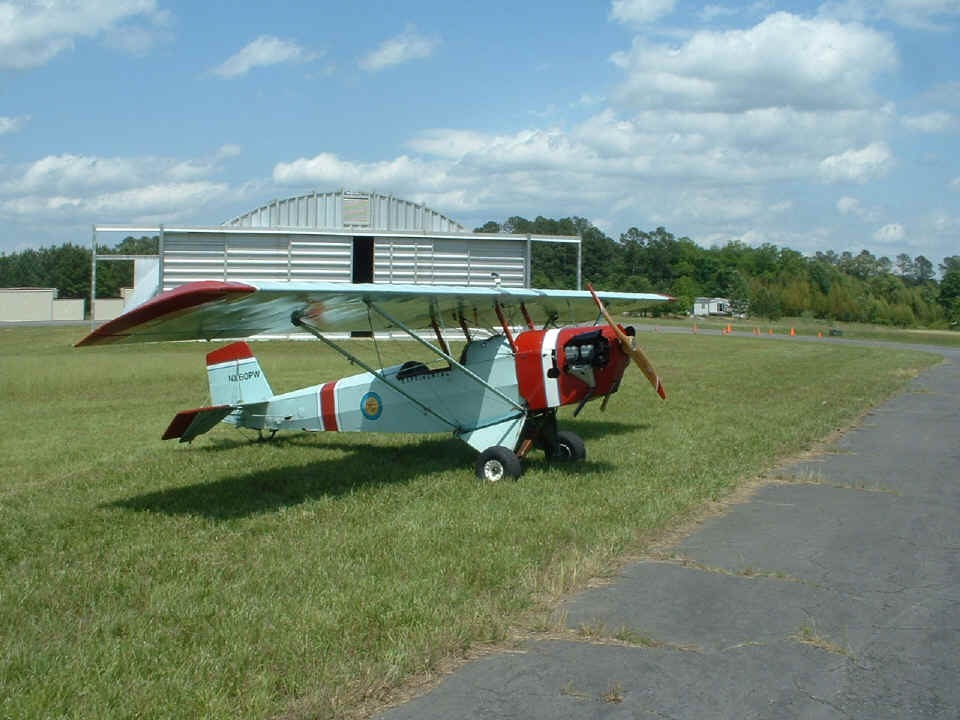 I had lunch and discussions with John Myers and RV-7A builder Jim Harchanko who flew in with his grandson from the Huntsville, Alabama area.  Jim is part of the TVRVBG organization.  I had to head for home before any afternoon thunderstorms arrived in the Chattanooga area.  You can see that I made it back when the weather was still nice in the mid-afternoon.  Wendell has his Cessna 182 down for annual inspection and maintenance.  A friendly A&P is providing the guidance for the work on the 182.  My job is to provide Wendell with guidance on the RV-8 construction project. 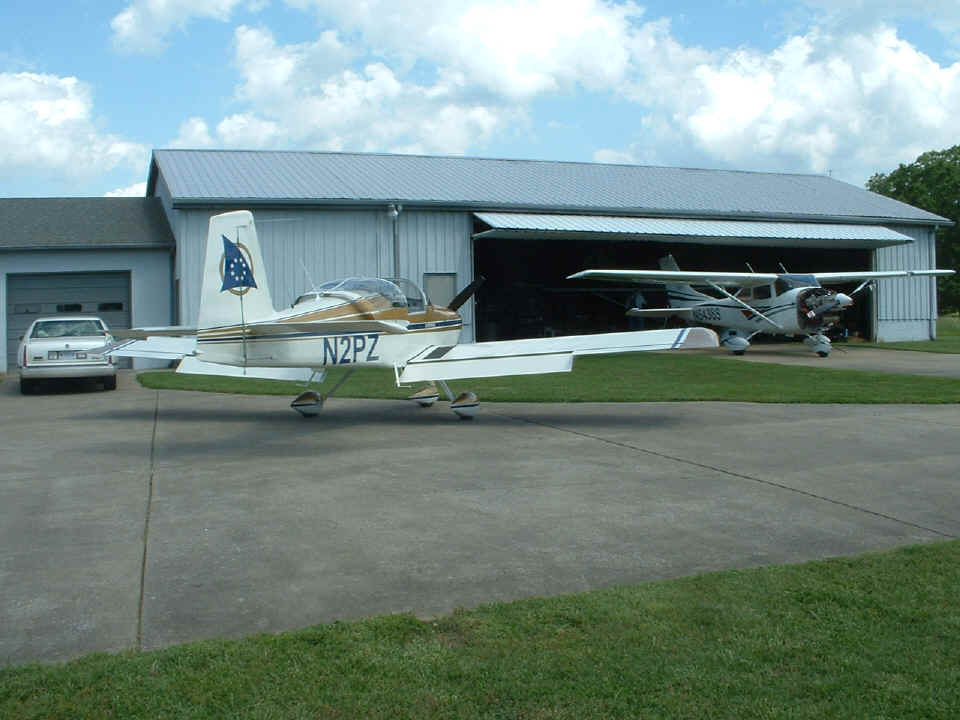 I spent a few hours working with Wendell on his RV-8 project after putting my airplane away.  After that, a grocery stop on the way home, with the hail and thunder storms arriving when I was about a mile from home in the evening.