April 26, 2005:  The morning saw the completion of another file in the commercial web project.  I called NationAir Insurance and got that going.  The policy is now in effect as I write this at 12:50 AM after midnight, April 27th.  I called the Nashville FSDO and spoke to a specialist on airworthiness inspections.  Looks like I will be using an AB-DAR instead of an FAA inspector.  A visit to the Collegedale airport around 2:30 PM got the rent paid for May, and I received a gate pass and key to the hangar where N2PZ will be fully assembled.   I called the towing company and arranged for the move to the airport on Wednesday, the 27th, after lunch.

The evening session was 2.6 hours to install some #6 platenuts on the horizontal stabilizer and the vertical stabilizer.  These will receive the 6-32 screws that will secure the fiberglass empennage fairing.  The HS got 10 of these platenuts, and the VS got 12. 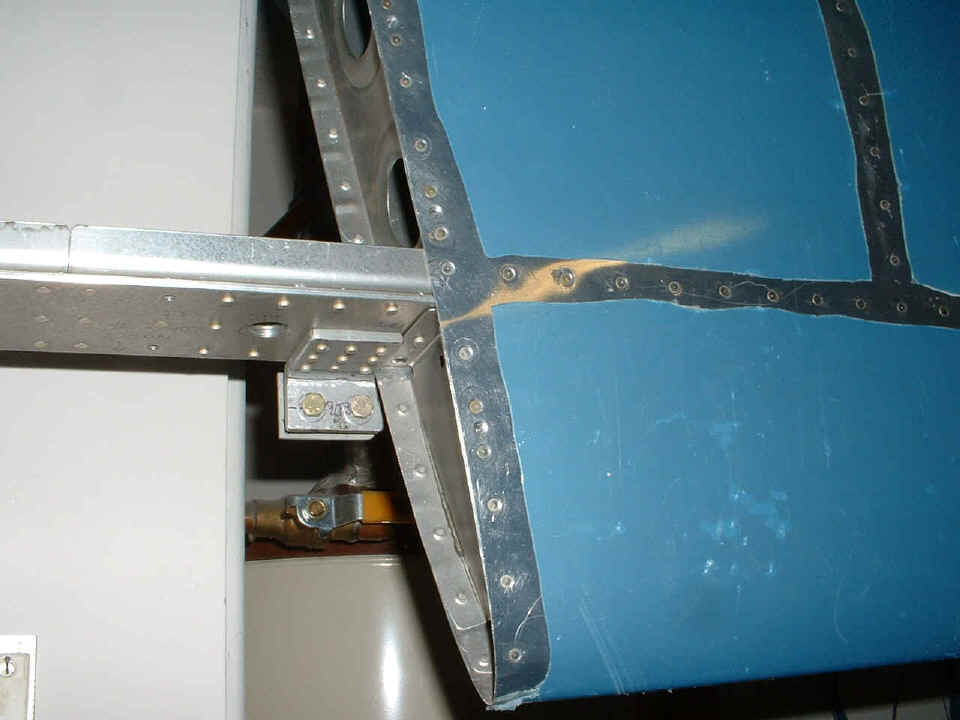 The heat strips got the extra packet of thermal epoxy applied to seal the wires, and to build up a layer at the edges of the strips to prevent oil or other liquid ingress between the heat strips and the oil sump pan on the bottom of the engine.   The silver tape you saw there yesterday was just to hold the heat strips in place for the initial curing of the thermal epoxy. 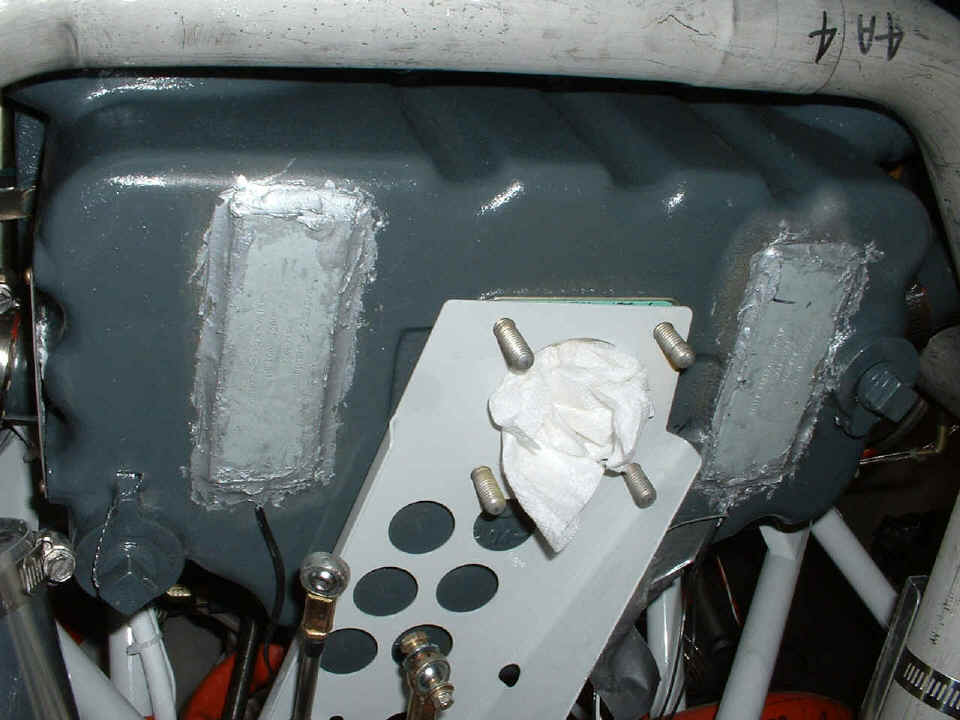 The carburetor and the FAB get put back on the engine in the morning, along with the cowl and the sliding canopy.  The last rain showers are forecast to pass in the morning with a sunny afternoon for moving the airplane to the Collegedale Airport.

April 27, 2005:  Moving day for the airplane!   I spent the morning putting on the carburetor/FAB, sliding canopy, and the cowling.  I filled up the baggage area and the seats with stuff.   I got a call from CFI Mike Seager in Oregon to set the dates for my RV transition training.  I fly out to Portland, Oregon on my birthday FIRST CLASS on Delta Airlines.  Mike and I have two days to get the required five hours of training completed.

Before the tow truck came, I packed the car with the fiberglass wing tips, the rudder and the vertical stabilizer.  I also put both tool boxes in the trunk and the parts bin in the back floor board behind the driver's seat.  The front passenger seat was fully reclined to allow the wing tips to sit together with the fat ends down under the dash panel of the car.  The rudder and VS were in the back seat.

Here are the photos.  I guided the airplane up the ramp with the winch connected to the nose gear leg.  J.R. Broome was very careful and wanted to get the ramp up off the ground as soon as possible to minimize the load on the gear leg from the nylon strap and winch.  Then I jumped down to snap this photo for you guys. 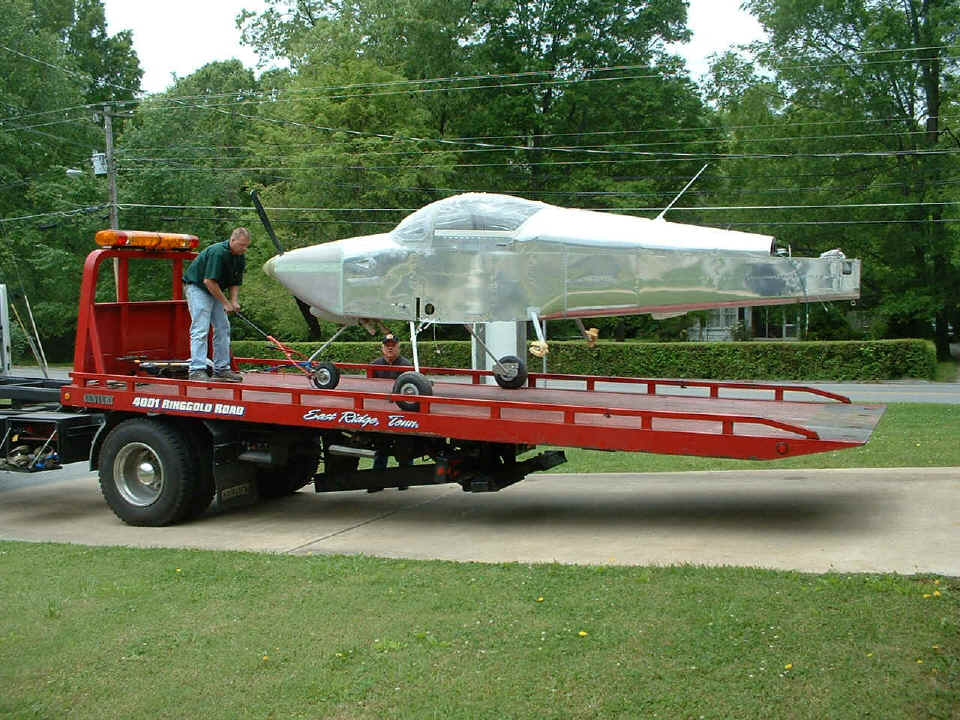 Next came the wings, but not so fast.  I worked with J.R. to put the airplane on the bed at an angle to make room for the wings at the rear of the deck.   We took each wing off the cart in the driveway, then put them on the lawn in order to lift the cart up on the flat bed.  Then we lifted the 60-pound wings up one at a time to put them in the cradle.  I put on one of my tie-down rings and used a rope to secure the wing and cart to the side rail of the truck.  This prevents the cart from moving toward the aft section of the fuselage. 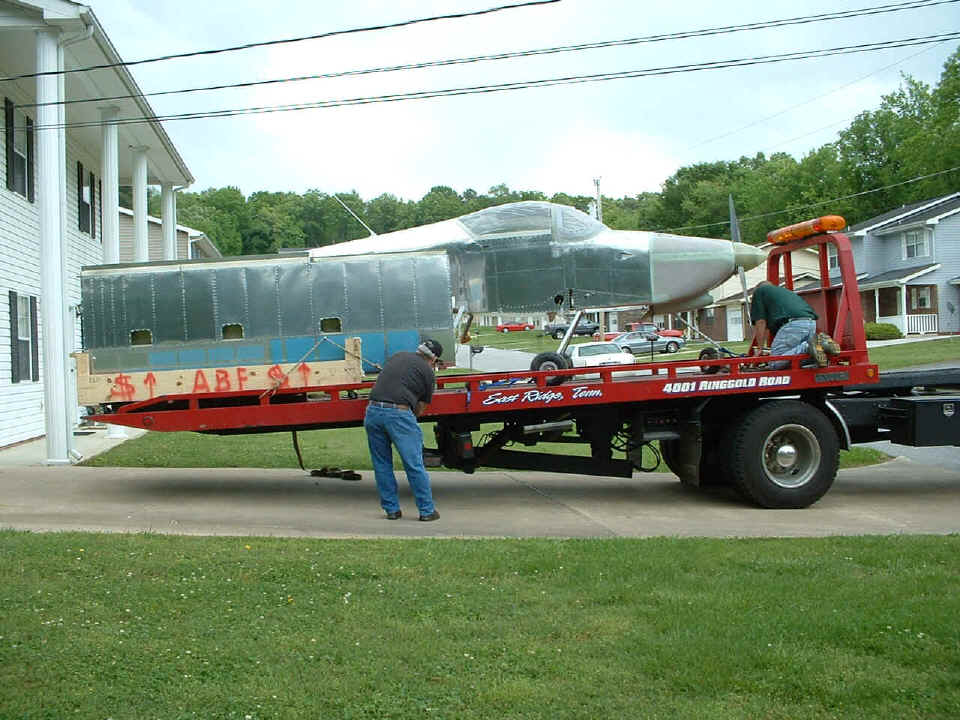 Then I got up on the truck and placed the horizontal stabilizer in between the wings, with it wrapped in the moving pad/blanket.  I grabbed two pieces of cardboard and put the elevators in with the HS in between them and the cardboards keeping the wings and elevators apart.  The elevator control horns were pointed inward over the top of the HS with a towel holding them up from the HS spar in the center.  Next came the work table, the bench grinder/drill press table, and the saw horses.  I had removed the drill press and the band saw to make the table easy to lift.  Those things can fit in the car for the ride to the airport when needed.  I wanted to be sure that all the stuff that would not go in the car got on the tow truck. 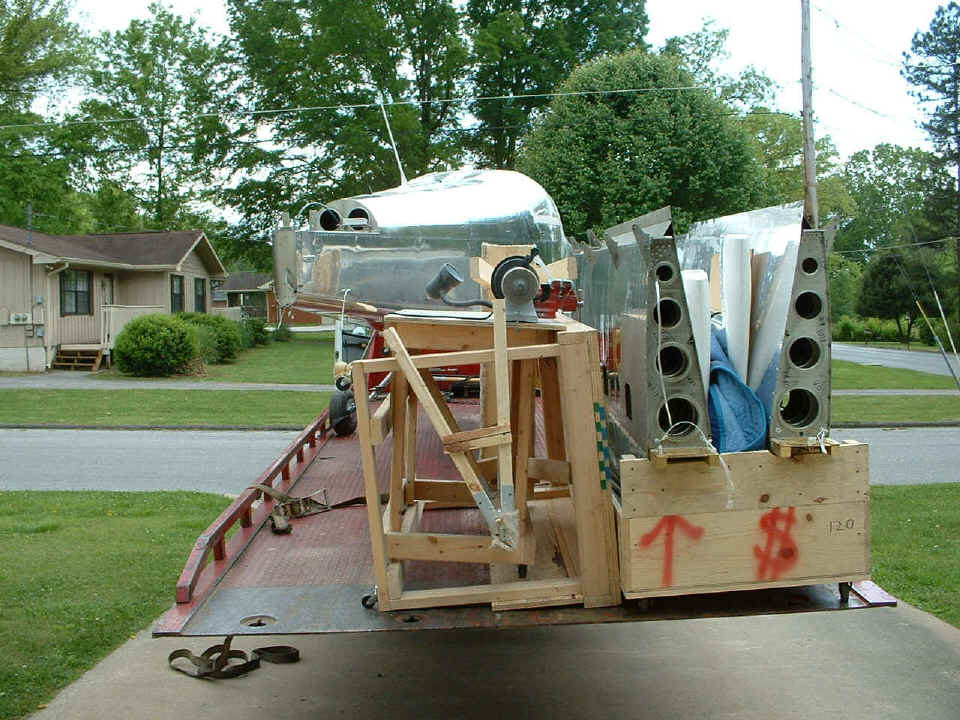 The steel step on the passenger side is just a few inches ahead of the wing on the cart. 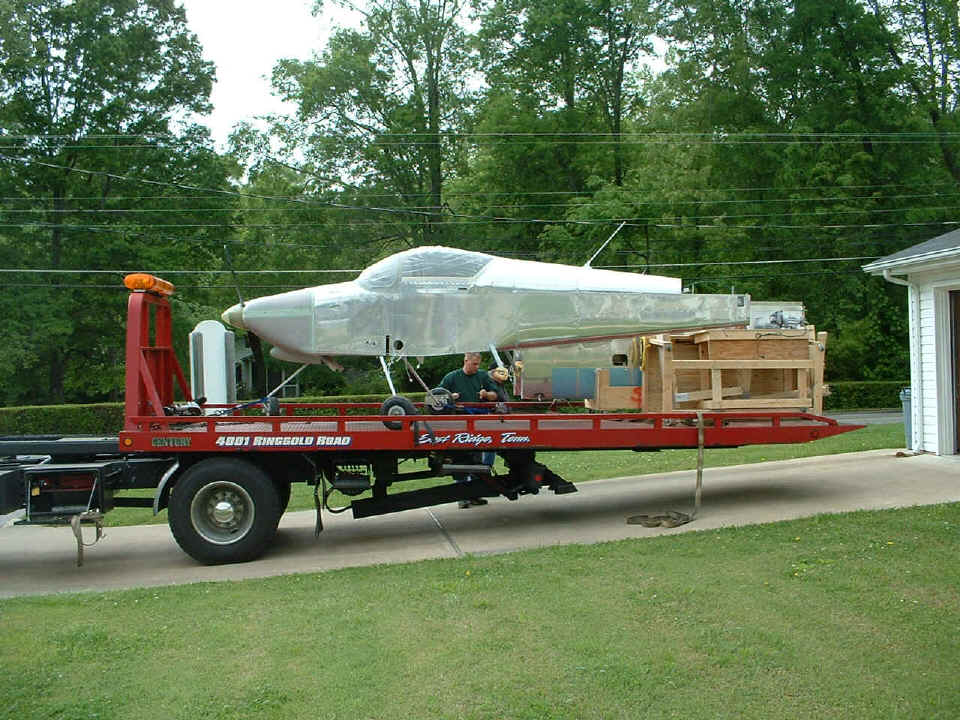 We finally got on the road around 3 PM.  I followed behind with the four-way flashers going and kept an eye on the load.  This photo is just after crossing OVER Interstate 75 on US 41, less than a mile from my place.  We had previously pulled out of my street onto the street that comes down to US 41, only to stop about 100 yards from the house to check how things were riding before getting out on the busy streets. 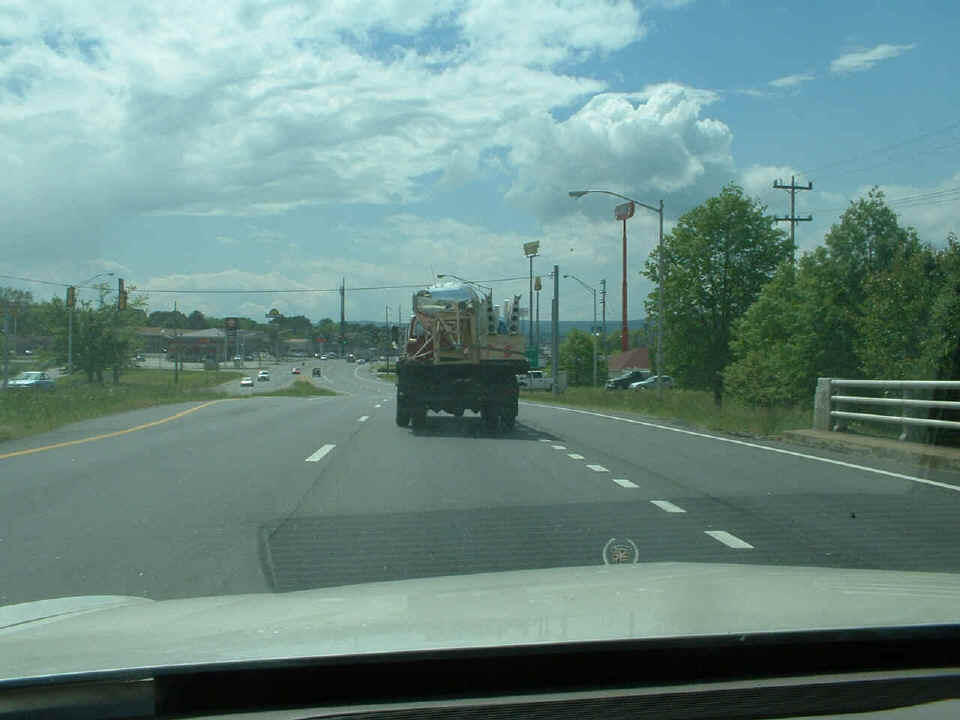 We cut through some local streets, past a hospital, then up US 11 & 64 (the Lee Highway), avoiding Interstate 75.  The top speed was 35 MPH, but usually less depending on our location.  The airport is much further away at these speeds, but it is much safer to keep the load steady on the truck.  You can see the nylon slings around the rear of the wing cart, and through the work table legs.

The ride to Collegdale on Tennessee highway 317 is scenic if you like tree-covered roadways in the country. 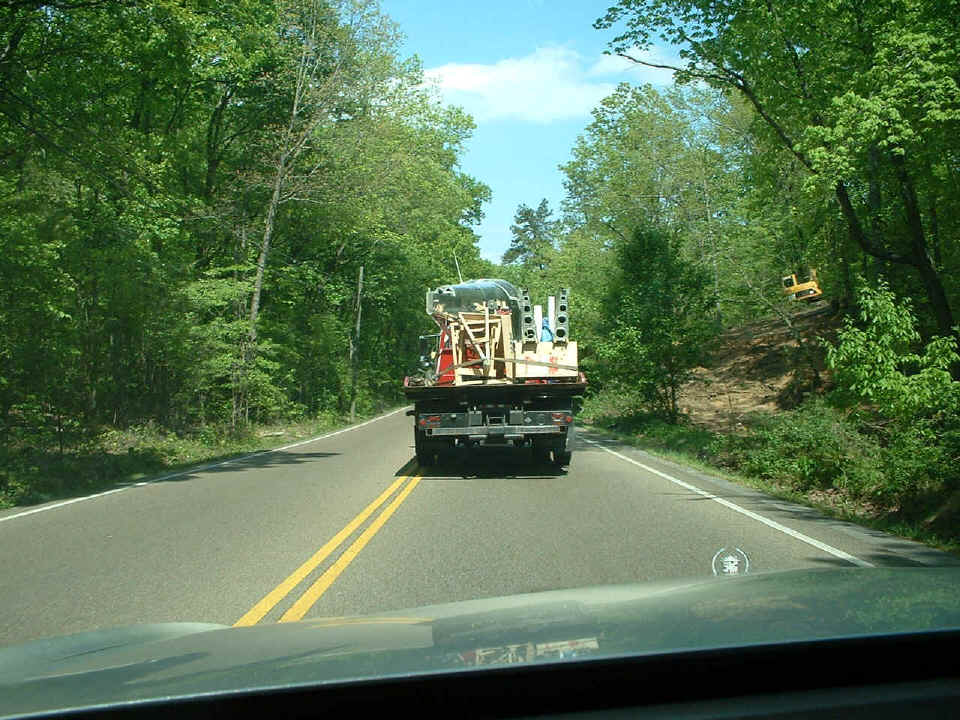