January 12, 2006:  Wendell had been talking with John Myers about his RV-8 project and this was our first visit to see what John was doing with his RV-8 quick-build kit.  Since Wendell had been there on one other occasion, we flew  to John's grass strip 44 miles down the valley in the Champ. 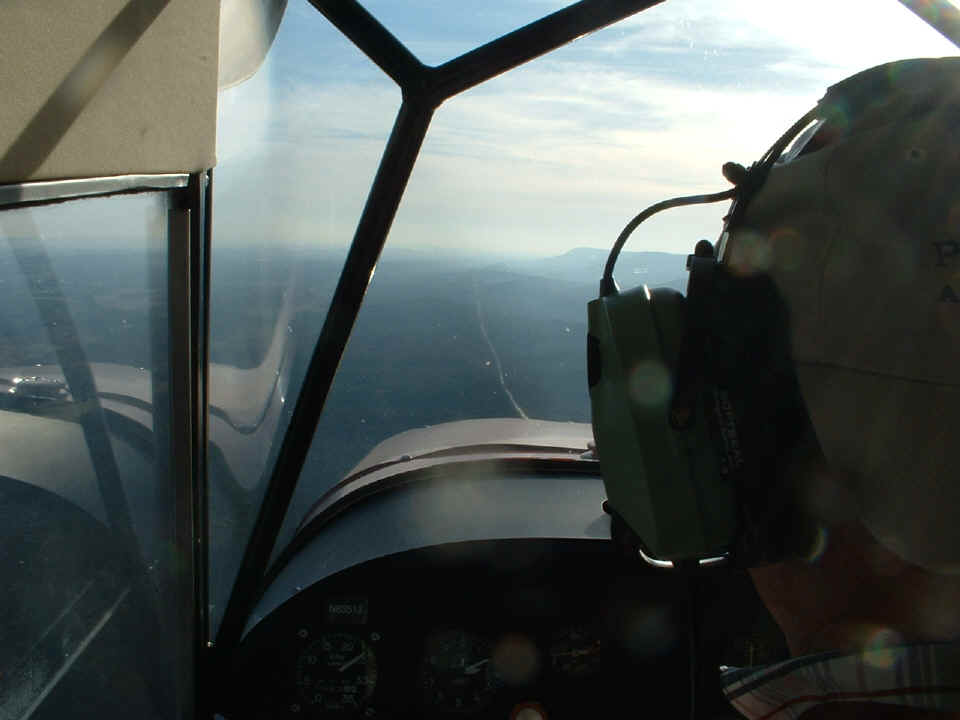 I managed to spill my red cup of water in the back floor board and some of it got on my ailing digital camera.  The out of focus "sparklies" you see in these photo are the remains of the water on the lens.  I could not see what the camera was getting when I took these photos, it was just point and shoot photography.   You can see the fuel gauge up on top of the instrument panel and the fuel filler just in front of the windshield.  The instrument panel is really sparse on an airplane with no electrical system.  The intercom is a portable battery powered unit. 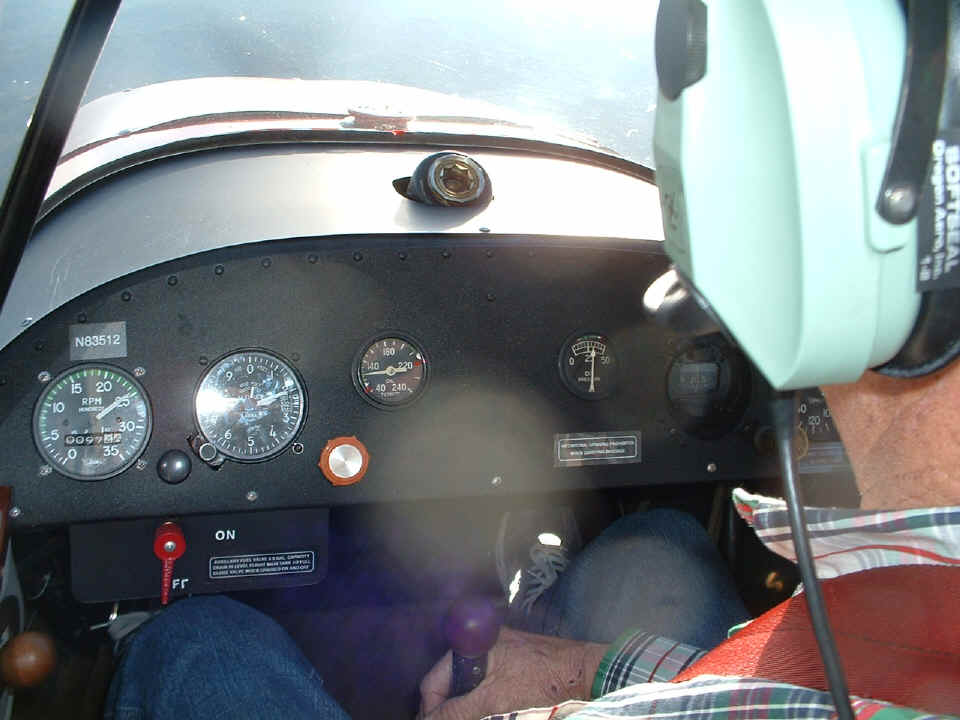 John is advising Wendell of some of Van's temporary rivets that he had to remove to finish some details with the roll bar and front seat back brace.  He used a silver paint on much of the interior.  It matched the natural aluminum so well, we almost did not see it!  John has already started wiring in some of his instrument controllers and sensors. 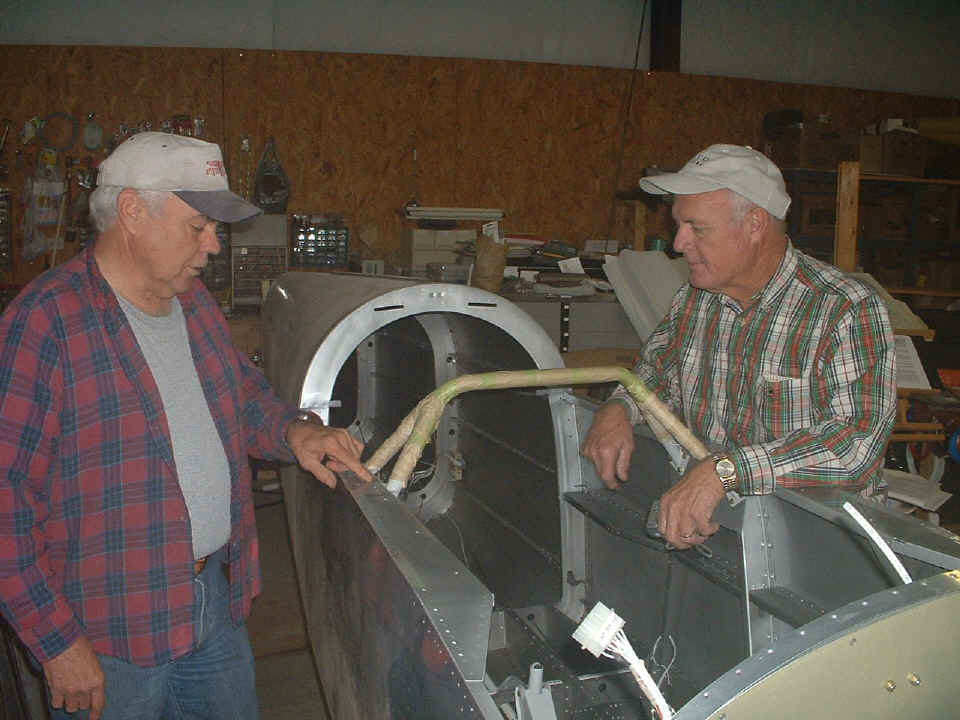 Some of the wiring going aft is visible in this photo as it runs along just under the upper longeron. 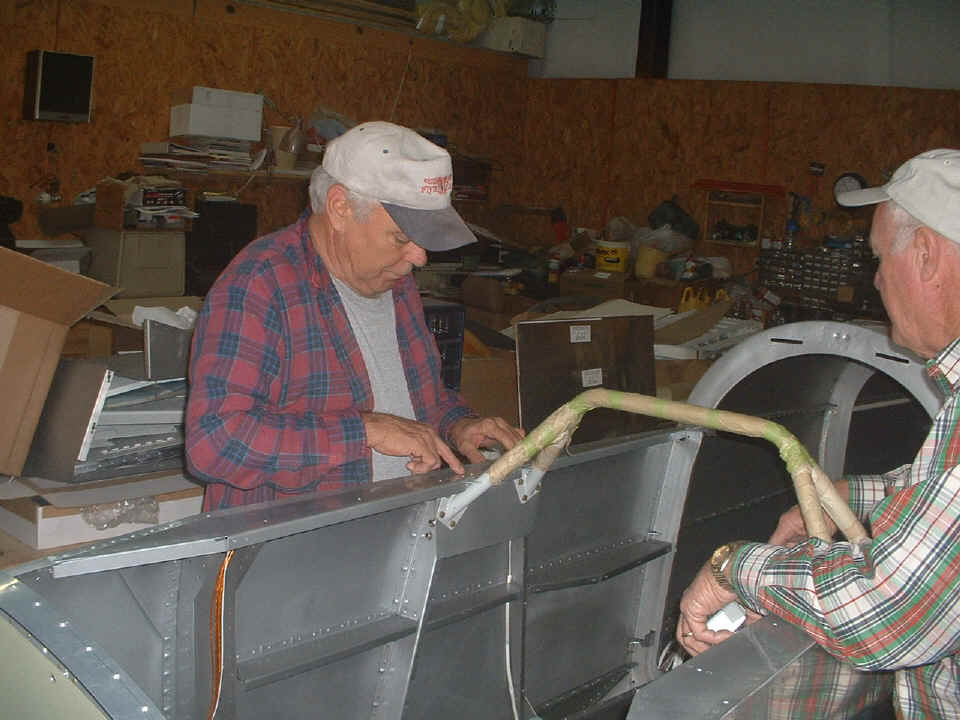 Here is a view of some of that wiring behind the instrument panel which is not yet installed.  That gold chassis with the green connector strips is the heart of the engine monitor display.  John has built a hinged access panel from the front baggage compartment which has fuse blocks on it and some sensors located there as well.  The hinged panel will provide good access behind the instrument panel when the airplane is completed. 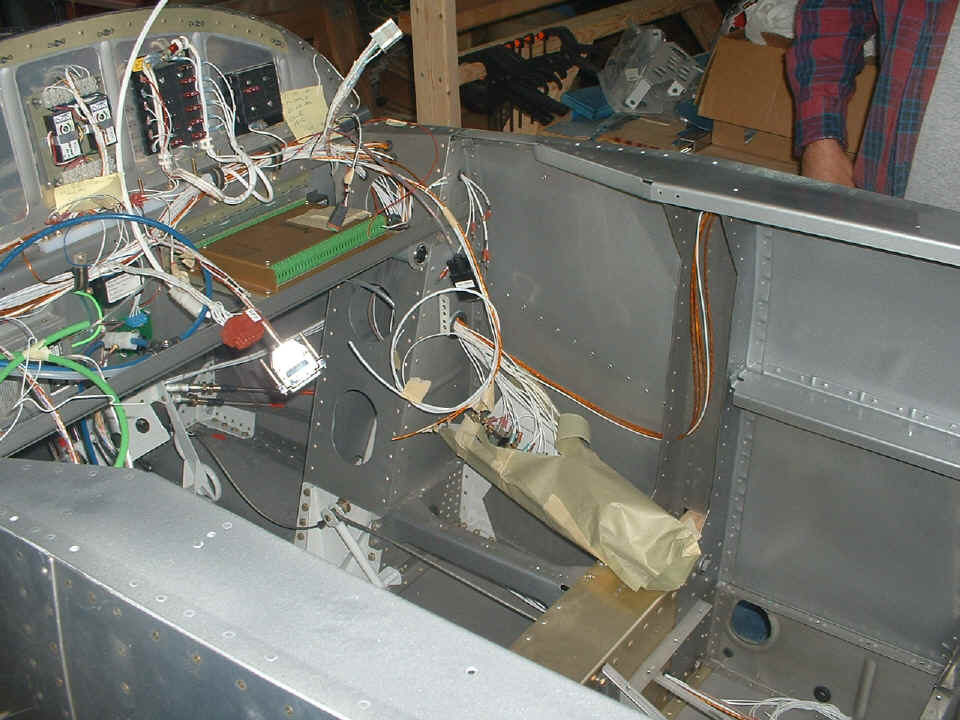 The fuel tank selector valve is down low on the left side in front of the pilot's seat.  The throttle, mixure, and propeller control cables are in position read to be connected when the control levers are installed. 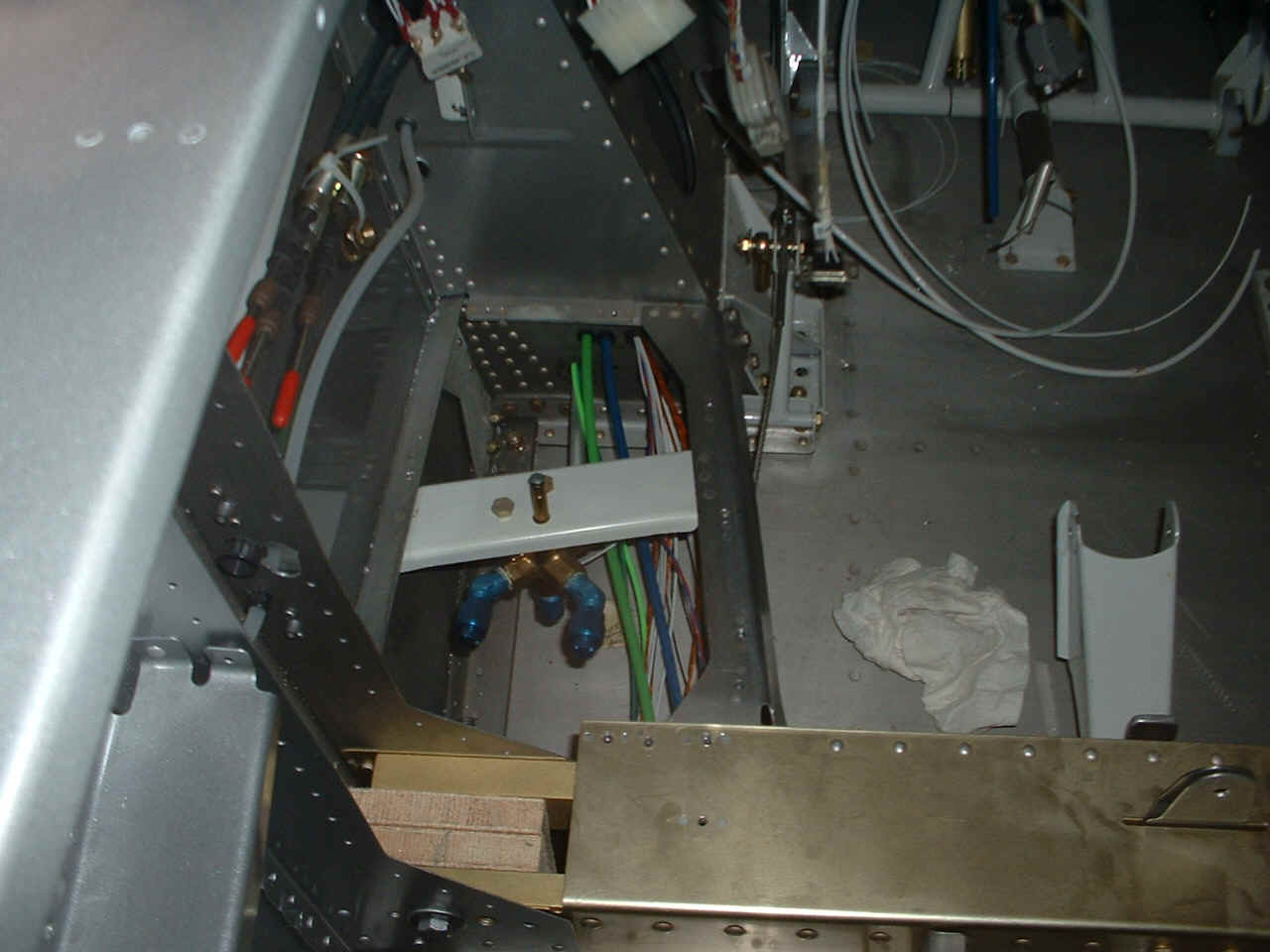 Remember that water that was spilled on the camera?  The sun was going down behind the nearby ridge and the temperature dropped quickly.  The result was this condensation on my camera lens.  Since my electronic display was not working, I was looking through the optical range finder and did not notice this clouded image until I downloaded it to the computer.  Wendell is scrutinizing some details down in the front area behind the firewall. 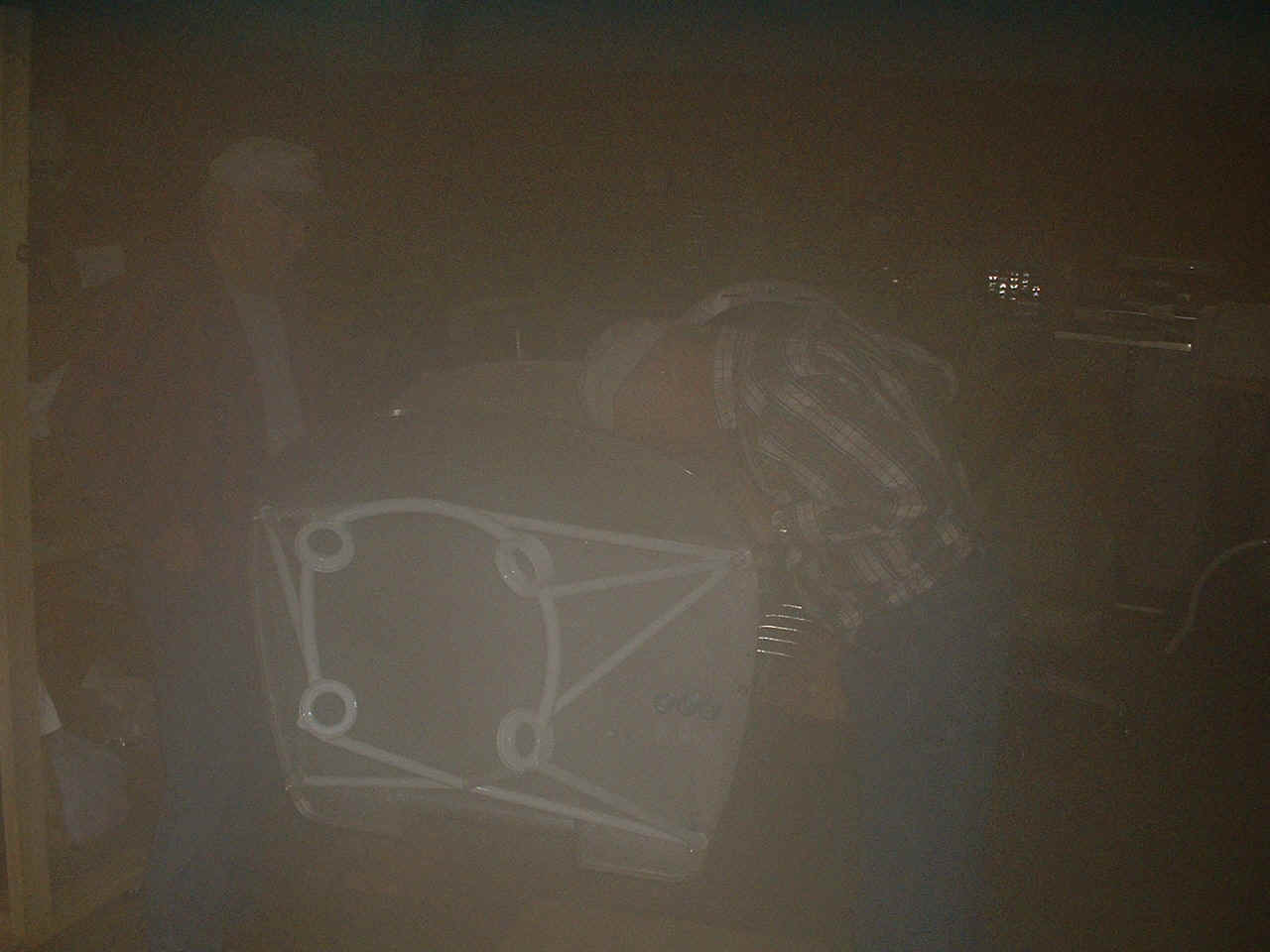 Since it was getting late and sunset was approaching, we had to start back to Folks Field.  We passed by the hangar which had the fuselage of a Mooney in it.   The damaged wing of the Mooney was out in the area in front of the shop and the hangar up on saw horses.  The 180HP parallel-valve Lycoming engine was on an engine stand adjacent to the fuselage in the hangar.  After it gets new ECI cylinders, it will be installed on the RV-8 project.  There was also a Cessna Cardinal and a Pietenpol in the hangar, both of them flyable.  A Van's RV-3 was also back there awaiting major repairs before it will fly again.  We walked back down to the air strip where Wendell got the Champ ready to go quickly since it was now a race with the coming sunset and nightfall to get back to our home air strip up the valley.  By the time I took this photo, the condensation on the camera lens was fading away, but not completely.  We made it home with time to spare before darkness fell on Folks Field. 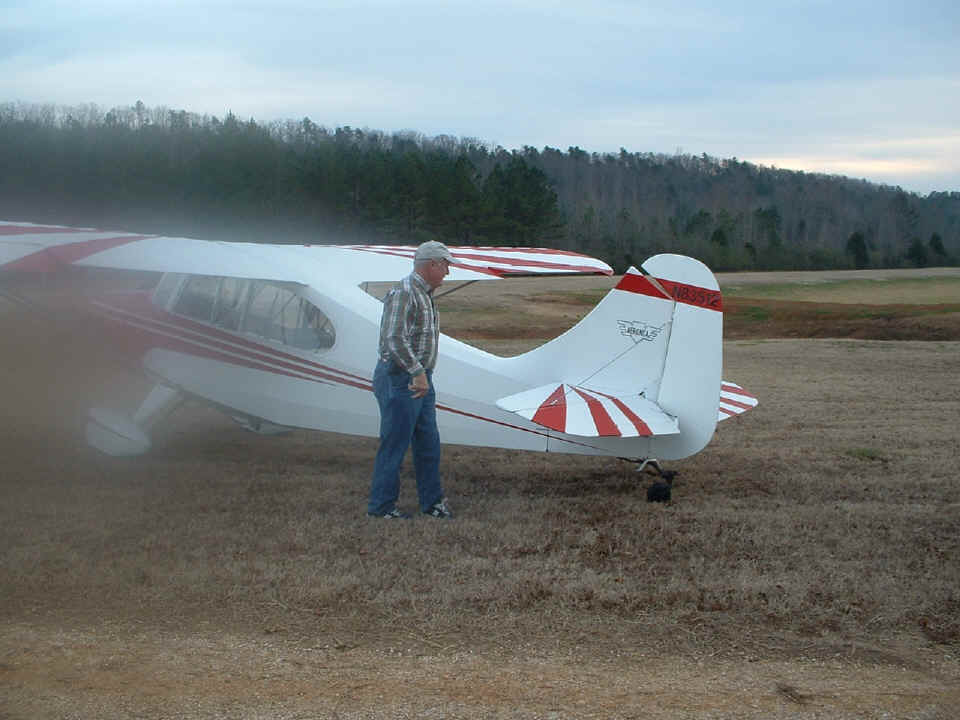 John Myers and I exchanged our airplane "business" cards during the visit.  His card has his GPS coordinates for his air strip printed on it along with the official FAA identifier, AL32.  I have programmed it into my GPS 296 and will fly back down there sometime in the coming weeks, earlier in the day for a better visit.   When I get to that meeting, I will post more about John Myers and his RV-8 project.   By the way, he got RV-8 kit number 81989 from Van's.  He apologized for not being further along, but he does have the other airplane projects in the hangar I mentioned earlier that consume some of his "free" time.

January 15, 2006:  I just received an email from John after he saw the paragraph above this one.  It now shows the real serial number of his RV-8 quickbuild kit.  He has reserved N8QX and N117JM, but thinks that N8QX will be the one to go on the airplane when it is time to register it with the FAA before completion and airworthiness inspection.