April 24, 2006:  I worked with Wendell for a couple of hours this evening to get started on his vertical stabilizer installation.   This photo shows the first fitting of the VS after drilling ONE hole at the bottom of the VS aft spar and one hole in the last bulkhead at the centerline.  I helped Wendell with the layout of the up-elevator stop, which has to be cut from a suitable aluminum angle before it can be drilled and installed to the fuselage.  This photo is strictly a "feel good" milestone photo since it is the first time the VS has been connected to the fuselage.  There is still plenty to do to get the VS fully aligned and secured to the fuselage. 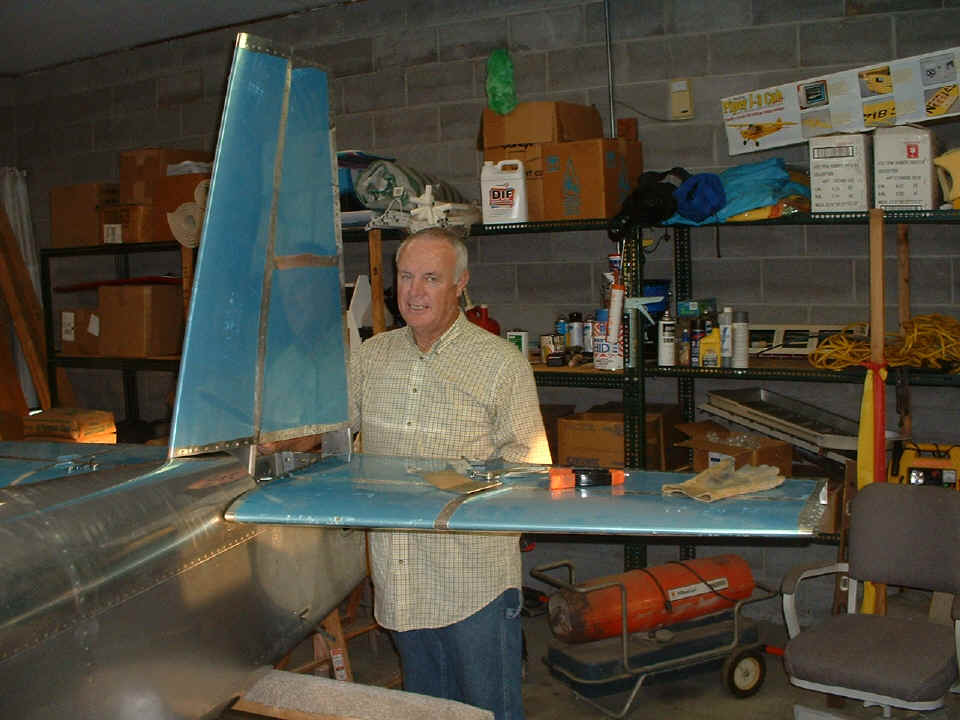 A lot of the time during this evening's session was spent looking at the large prints and getting the precise location of the vertical stabilizer on the aft bulkhead of the fuselage.  The up-elevator stop also had a complex blue print that I explained to Wendell and helped him with the layout of the various dimensions for cuts and holes to be drilled.  That piece is critcal to the mounting of the vertical stabilizer.  It is made from a piece of 6061-T6 aluminum angle.  It is different from the similar piece on my RV-9A.  As I go further through this RV-8 project, I can see where the design changes were made for faster and easier assembly for the RV-9/9A. 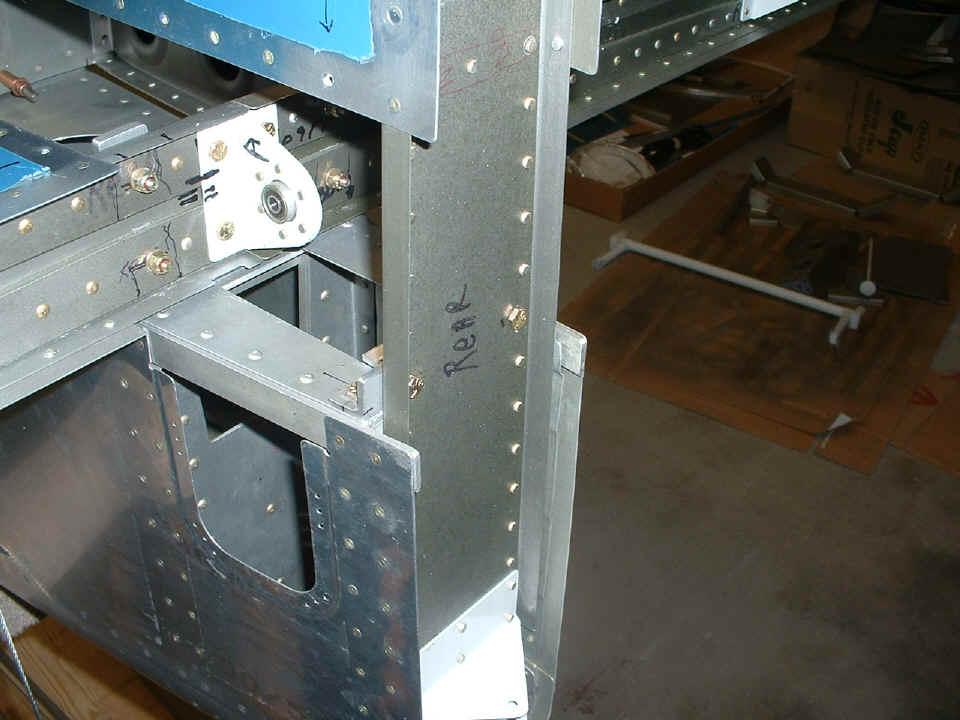 Next came the vertical alignment of the aft spar of the VS longitudinally by adjusting the overlap of the VS front spar with the mounting bracket that secures it to the front spar of the horizontal stabilizer.  If you look at the angle that serves as the elevator stop in the up direction, it has the center bolts from the aft spar of the VS bolted to it.  There is one washer on each bolt, in between this angle and the spar, to insure that the two bottom hinges on the VS are "plumb" with each other.   The front spar overlap with the bracket there lines up the top hinge bracket with the other two.  That level has a V-groove in one surface where all three hinge brackets are aligned in this photo. 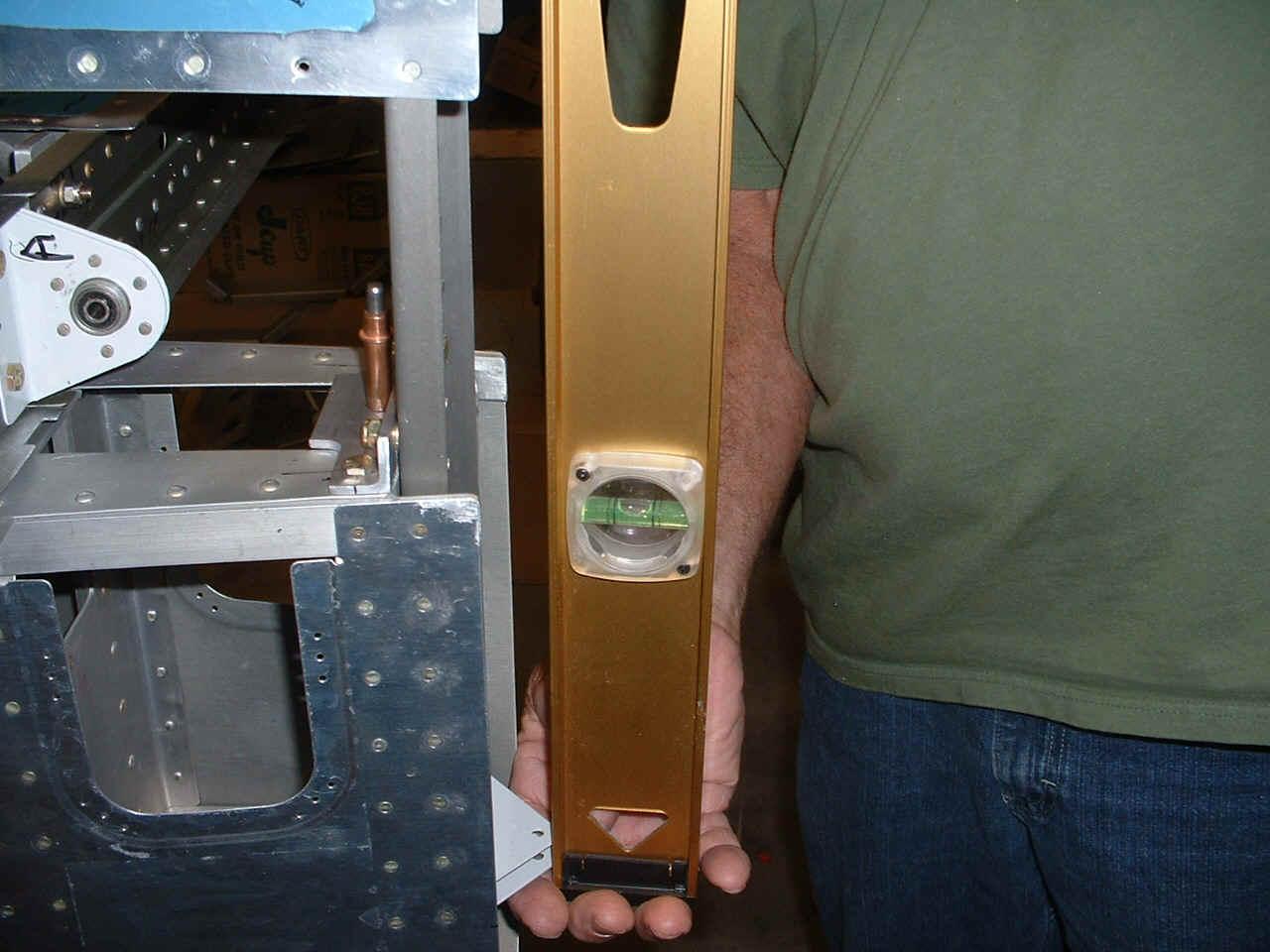 With the satisfactory alignment of the aft spar shown in the photo above, we drew some vertical reference lines showing the vertical alignment of the VS front spar with the horizontal stabilizer mounting bracket.  We then checked the nose of the vertical stabilizer with a centerline on the top aft skin of the fuselage to adjust the offset of the VS to zero with the fuselage.  My RV-9A has a small offset of the VS designed into it, but the RV-8 does not have it.  That means that RV-8 pilots need more right rudder on takeoff than RV-9 pilots need.

Anyway, with the front spar securely clamped in the position that set the longitudinal offset of the VS and the vertical alignment of the three rudder hinge points, three cleco holes were drilled through the VS front spar and the forward mounting bracket to secure it.  With that step, and the clock already showing us it was after 9 PM, we called it a night.

During the first attempt at putting the rudder hinge bolts in, we discovered that one of the rod-end bearings was not in the correct location.  After adjusting for the error, the bolts finally went into position and the free movement of the rudder was confirmed.  We checked the clearance between the top of the vertical stabilizer and the counterweight arm of the rudder to see that it is parallel from the front of the arm to the hinge line.  We also looked at the clearance between the front spar of the rudder and the aft spar of the vertical stabilizer as the rudder swings from one side to the other.  That test revealed a slight bend in the rudder spar left flange near the bottom.  We put a straight edge along the surface of the rudder spar to confirm how much it would have to be straightened.  Since the bend in the flange is below the rudder skin, it will be easy to correct it with the seaming tool. 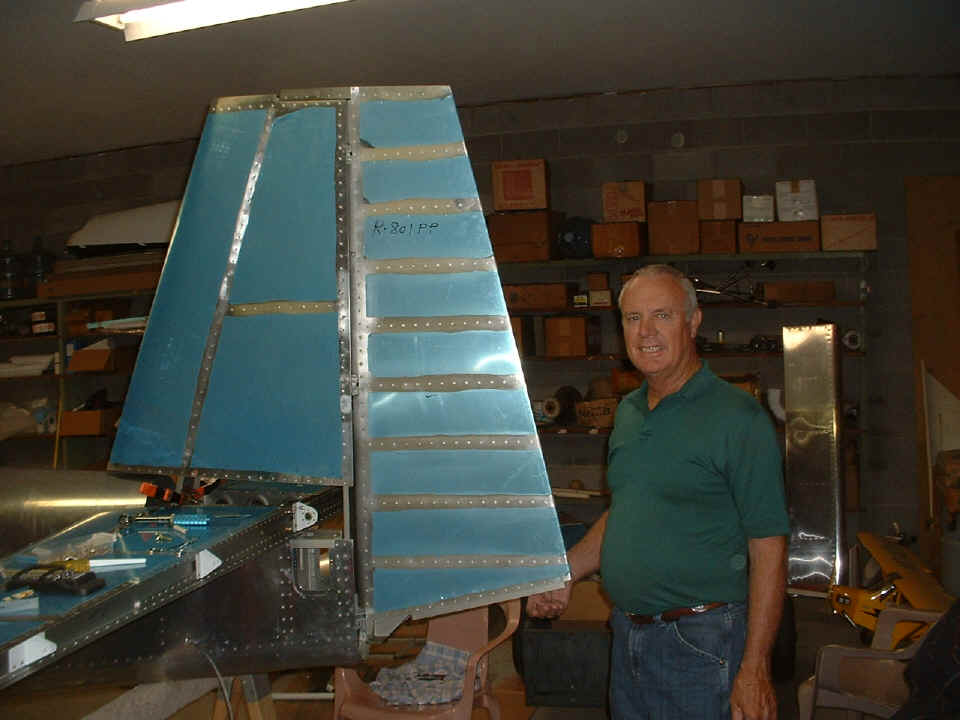 The rudder and vertical stabilizer will not be put back on the fuselage for now.  The next session will address the installation of the throttle quadrant and the rear seat throttle before installing the manual elevator trim cable and connecting it to the elevator trim tab.  That is the reason that the vertical stabilizer and rudder will remain off the airplane for now.  When elevator trim is working, then the VS and rudder will be put back in place for the attachment and adjustment of the rudder cables.

April 30, 2006:  I had some time with Wendell Saturday and Sunday (30th) to get him on the way to the next steps.  It has been all about reviewing the various components to be installed next.  The throttle quadrant and the rear seat throttle are the focus here along with the elevator trim cable installation.  Some of the time Saturday afternoon was spent bolting the throttle assembly into the bracket for the left wall.  Today, it was searching for the three steel clevis' that terminates the ends of the three control cables, only to find they are ordered separately (and we didn't).  We spent some time on Sunday afternoon figuring out what the dimensions and placement of holes in the bulkheads between the rear throttle control and the main control up by the pilot seat.  I also indicated exactly where the holes would be drilled in the bulkhead in front of the engine and prop control levers to pass the cables forward though the gear leg towers inside the fuselage.  No photos today, since nothing was drilled or attached other than putting in some 5/8" plastic bushings to install the elevator trim cable.

Wendell finally sees that the instrument panel he wants may not be the one he can squeeze into the panel space available.  We worked with my instrument template and a cardboard instrument panel to try two different instrument layouts.  The Dynon D-10A will fit OK, but he wants the D-100, and it is just too big.  He is ready to order avionics and we will be starting to wire things up soon, right after the throttle and elevator trim cables are installed inside the fuselage.

May 1, 2006:  I spent a few hours with Wendell after 5 PM tonight to check on his work with the rear throttle lever installation.   After providing him with some guidance on that and the clearance holes to the main throttle quadrant, we sat down at his computer and ordered many of the optional items needed to get the project further along.  The elevator trim cable installation should take place soon.

May 4, 2006:  I had another evening session with Wendell tonight with the focus on getting the green elevator manual trim cable installed, along with the elevator bellcrank and pushrods.  Van's designed in a couple of access holes aligned with the lower bolt of the bellcrank that calibrates the linkage at the "neutral position" for the joy sticks and elevators.  The two ratchets with sockets on them are keeping the bellcrank in that position in this photo as the remainder of the elevator connection steps wait to be accomplished in our next joint session. 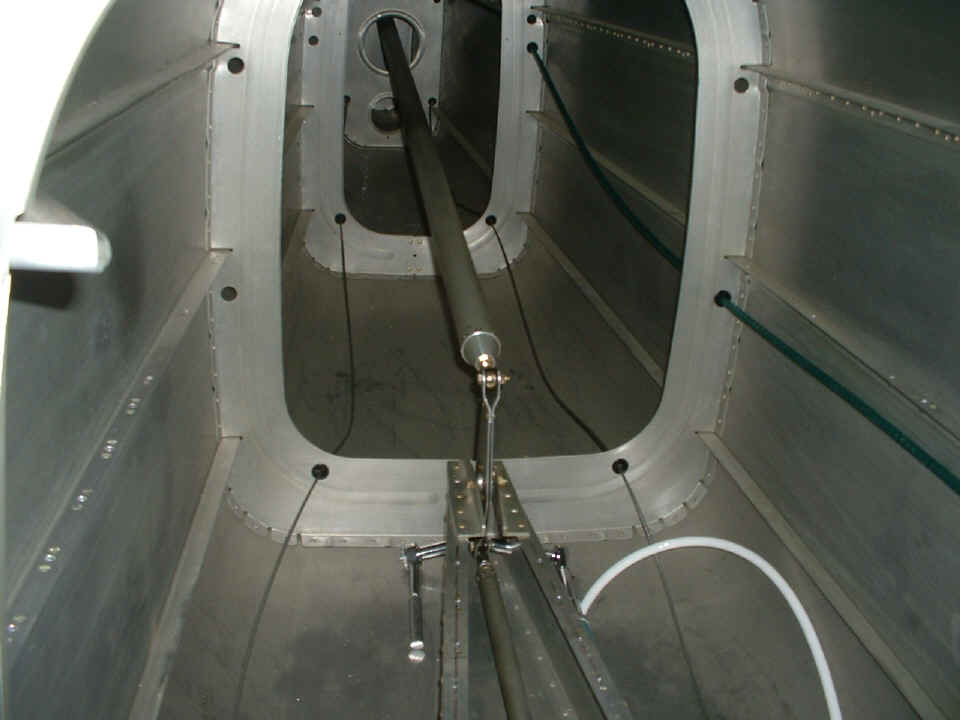 Here is the other end of the trim cable and the large elevator push rod awaiting connections to the elevators.  He ordered his Hartzell constant speed prop via Van's Aircraft this week.  I see that I also failed to mention that he ordered his engine from Penn Yan Aero last week.  He is getting excited as the list of things he needs is getting smaller.  He is also getting ready to order his avionics package.   Stay tuned for more... 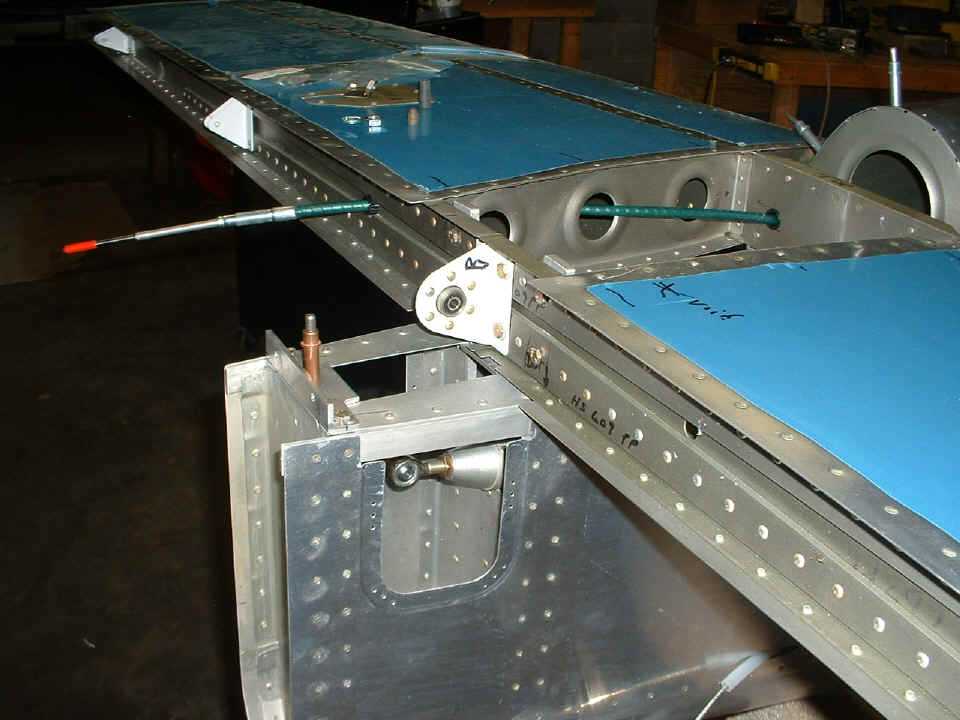 May 6, 2006: I went over to work with Wendell Saturday afternoon and here are the results of our session.  The horizontal stablizer was put back on the fuselage after the elevator trim cable was installed as seen in the photos above.  The elevator was put on today, threading the green elevator trim cable in place as the elevator was bolted on.  The trim cable was attached and calibrated for the middle position setting of the control knob.  With the elevator bellcrank locked in the neutral position, the two elevators were also clamped in-trail with the horizontal stablizer.  The large elevator push rod tube had been previously adjusted to the correct length between the rod-end bearings.  That left only one thing to do, drill both elevator control arms at the correct locations to bolt the elevators to the push-rod tube.  Then with the elevators locked in place, the final adjustement of the elevator linkage to bring the pilot's joy stick to vertical alignment and the elevators are now operational!  After that the vertical stabilizer and rudder were put in place and the rudder cables were connected with some temporary bolts. 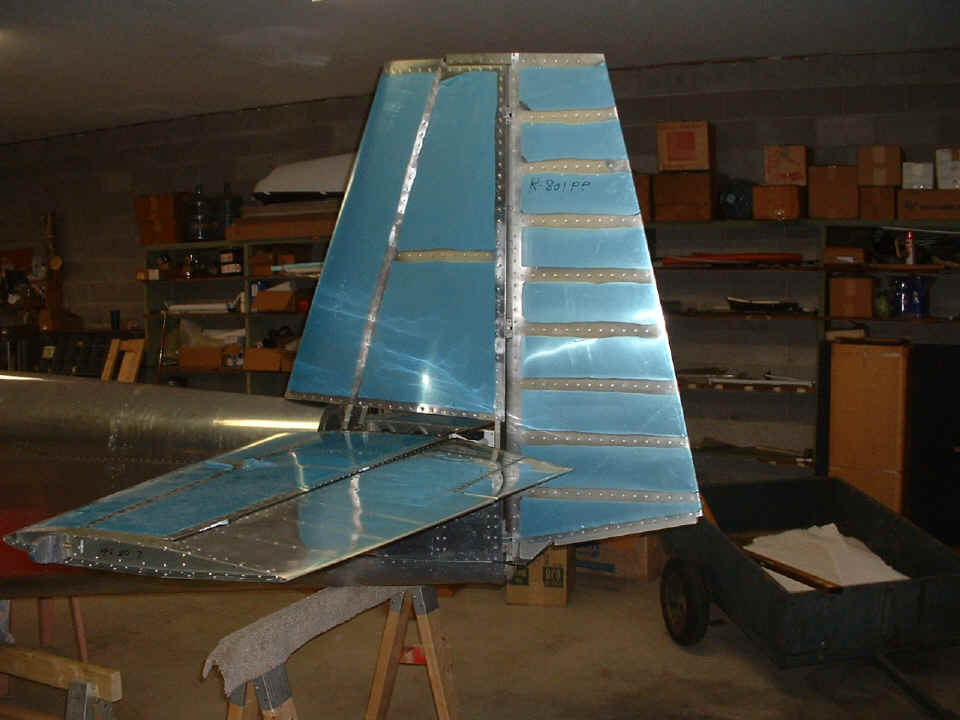 Here is a photo showing the engine controls and the elevator trim cable knob mounted to the side of the instrument panel.  The longest lever is the throttle with the rear seat throttle connecting rod attached.  The very short lever with the red knob will have the mixture control cable attached to it.  The other short lever with the black knob will be connected to the propeller governor. 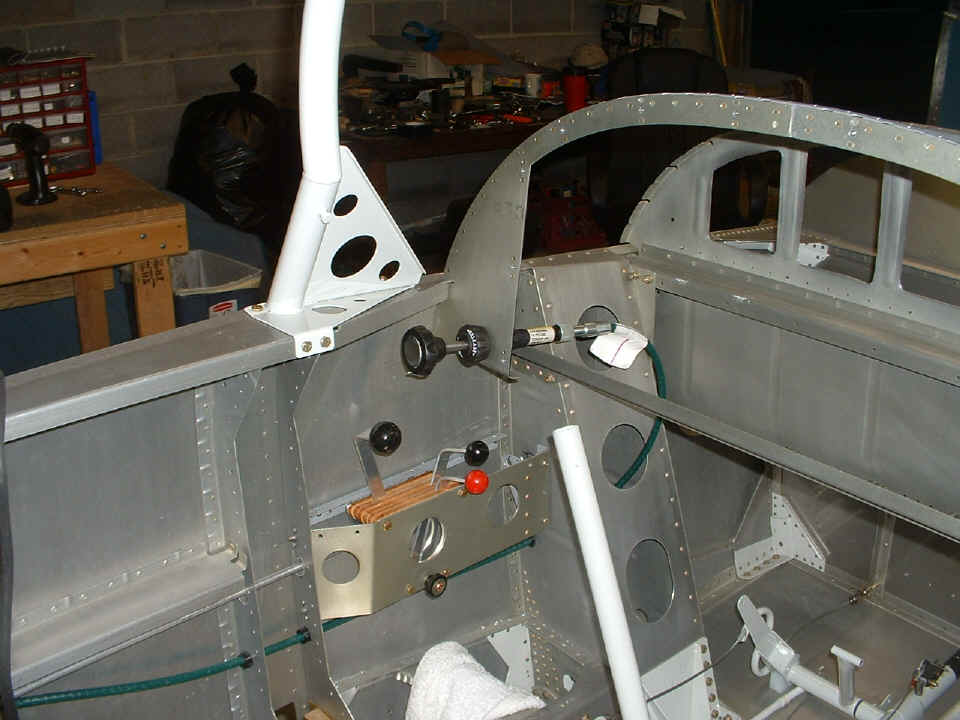 With eight photos on this page, we come to another milestone in Wendell's project.  Photos and information from the next work session will be published on a new page.