November 27, 2014: It is Thanksgiving Day here in the USA and a beautiful day to go flying.  A dead battery put an end to that idea.   I took off the upper cowl and checked the battery voltage directly on the terminals and it appeared to be fine.  The battery charger did its thing when I went off to find some lunch.  That is not easy on this holiday when almost everything is CLOSED.   When I got back to the airport, the LED indicator on the charger was GREEN, but the battery did not have the current capability to turn over the engine.  I looked at the voltage with the master switch ON and the avionics master ON with only the engine monitor operating.  It reported around 10 volts DC but everything blinked OFF when I tried the starter.  The prop hardly moved.  It sure sounds like a DEAD cell inside the battery with HIGH resistance.  That GREEN LED light on the battery charger was indicative of a "surface charge" to bring the voltage up over 13 volts on my digital voltmeter.

The first Odyssey PC680 battery was installed August 18, 2004 during construction and lasted until February 2011 when it was replaced.  Now it is time to replace that second battery before I can fly again.  I took time today to clean off the dust and the bugs from the last flight.   I found a small scratch on the wind shield that was easily cleared with my Plexiglas polish.

November 28, 2014:  Today is BLACK FRIDAY for those folks who are in a shopping frenzy for the best deals.  For me, it was a day off with no need to rush home to a family banquet.  I have the time to confirm my electrical problem with the airplane.  I took the cowling completely off the airplane.  This allowed me to verify the DC power connection from the battery to both solenoids are clean and solid connections.  Bill helped me to verify the battery is the problem.  I got into the pilot seat while Bill was measuring the battery voltage at the input to the master solenoid.  I turned on the master switch and the battery voltage started going DOWN immediately.  I had enough current and voltage reserve to turn on the avionics master switch and the voltage continued going down.  I was able to read the voltage on my engine monitor as Bill was calling out the ever decreasing voltage from the battery.  When I engaged the starter switch, the prop moved a little, the same as yesterday, and the battery voltage went way down.  This proved the battery is the problem and there are no other loose connections from the battery to master solenoid and the starter solenoid.  I removed the battery from the airplane and ordered a replacement from Amazon.com online. 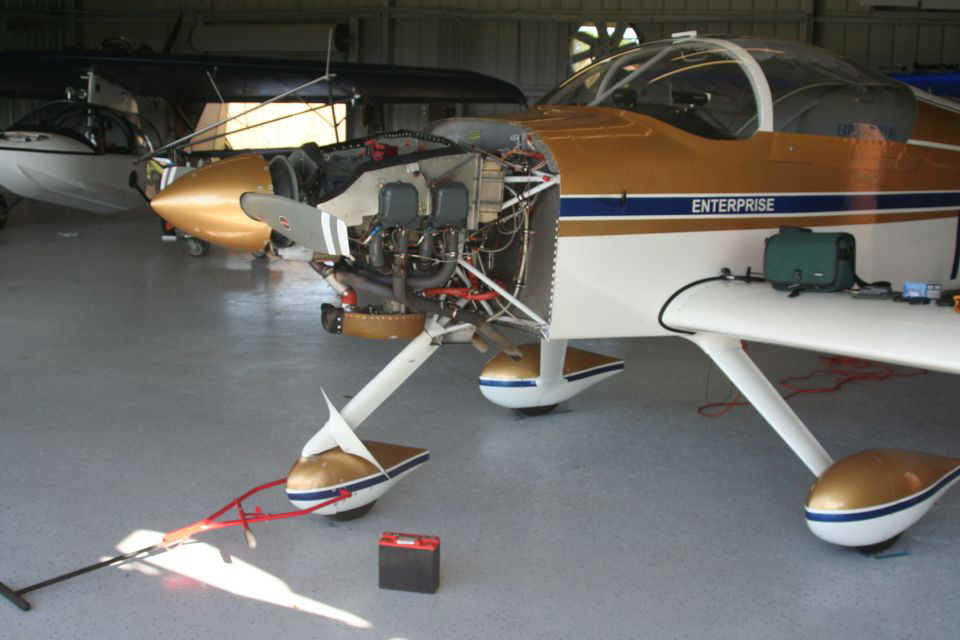 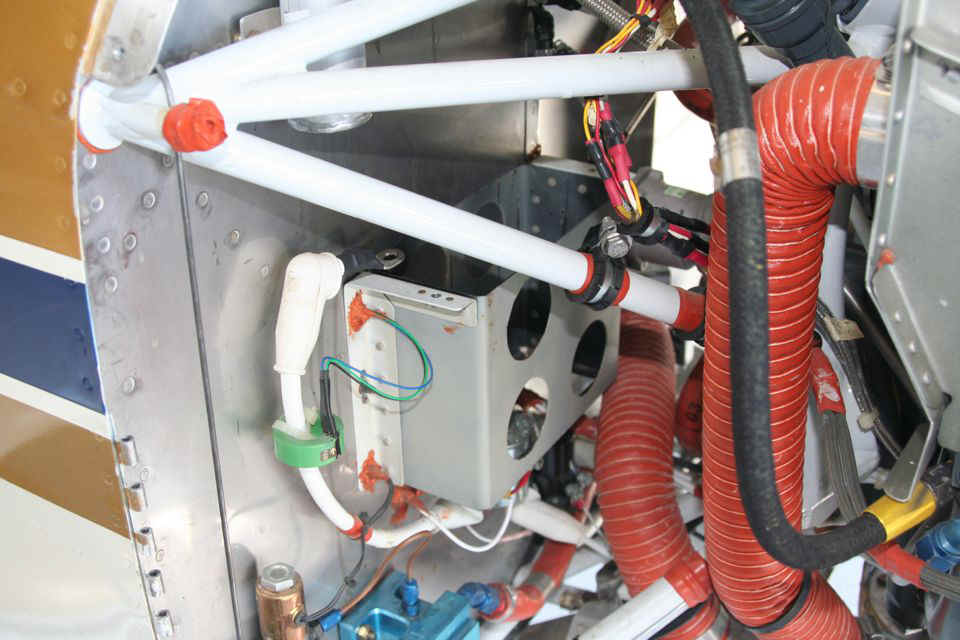 I will post here when the battery gets installed and I take the next flight with the Enterprise.

December 5, 2014:  Friday's are slow days for the day job.  I got a chance to go to the airport and install the new battery.   I pulled the airplane out on the ramp and cranked the engine with no problem.   I made the usual alternator current and voltage checks with normal results.  I put the airplane back in the hangar and put the cowling on since I am going flying to an open house at the Bartow, Florida airport tomorrow.

December 6, 2014:  The Saturday morning departure was just after 10 AM.  I took off and got up to a reasonable altitude for the short flight over to KBOW.  I engaged the autopilot with the GPS set for DEARY intersection on the way to the Bartow Airport.  I took some photos along the way.   The morning haze inland from the Atlantic Ocean is common in the morning.   Lakes, farmland, and wooded areas are common between Melbourne and Saint Cloud, Florida.  Deer Park is a small community on US 192 that inspired the name of the aviation intersection DEARY.  It is used as part of one instrument approach to the Melbourne airport. 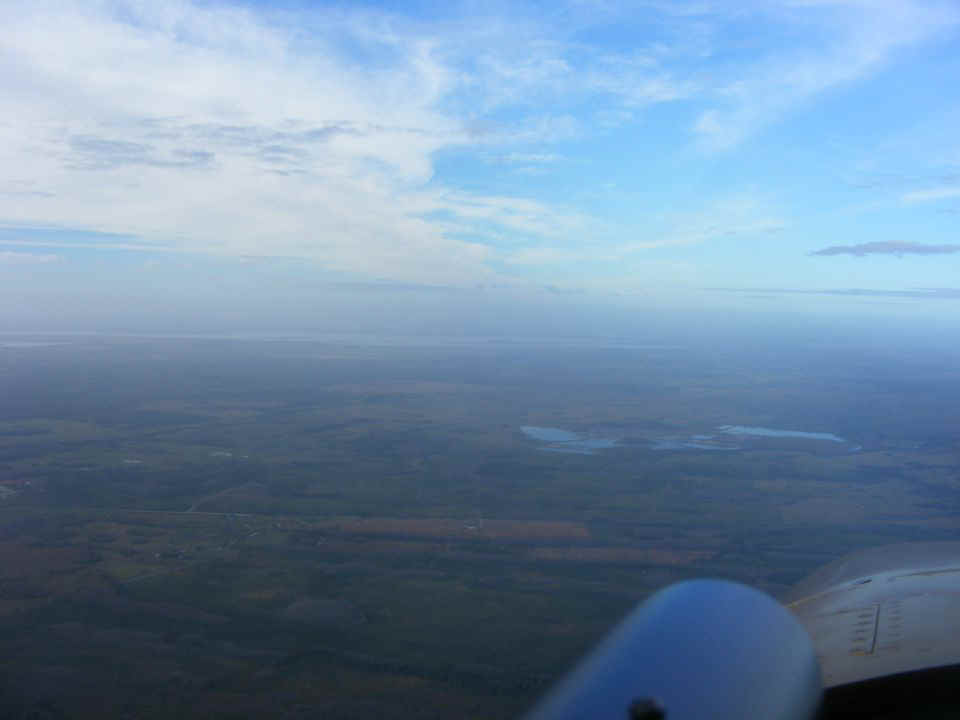 I took this photo while flying west at about 3000 feet MSL about 2 miles south of Cypress Lake, which is just west of the Florida Turnpike and about 11 miles south of Saint Cloud and approximately 25 miles south of the Orlando International Airport.   At this point, I am between R-2901E restricted area and the Orlando Class B air space where they are about 3 miles apart.  The Avon Park Bombing and Gunnery Range is south of here.  I am about 30 miles from the Bartow Airport. 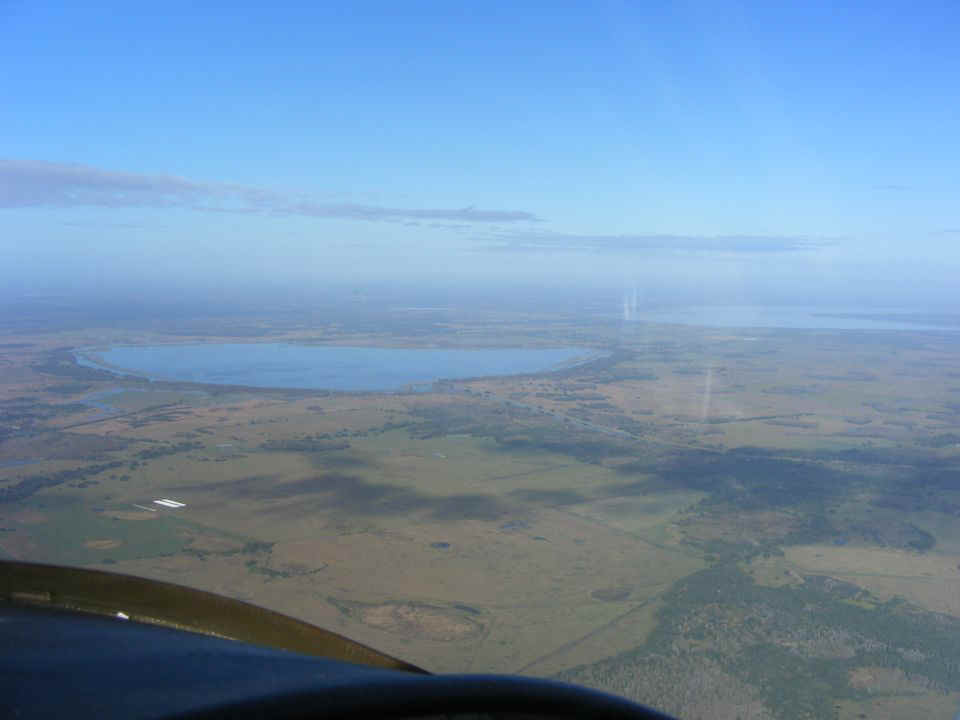 I started listening to the Bartow Control Tower about 20 miles out and heard the amount of air traffic converging on the field.  I managed to get in with no holding outside the Class D air space. 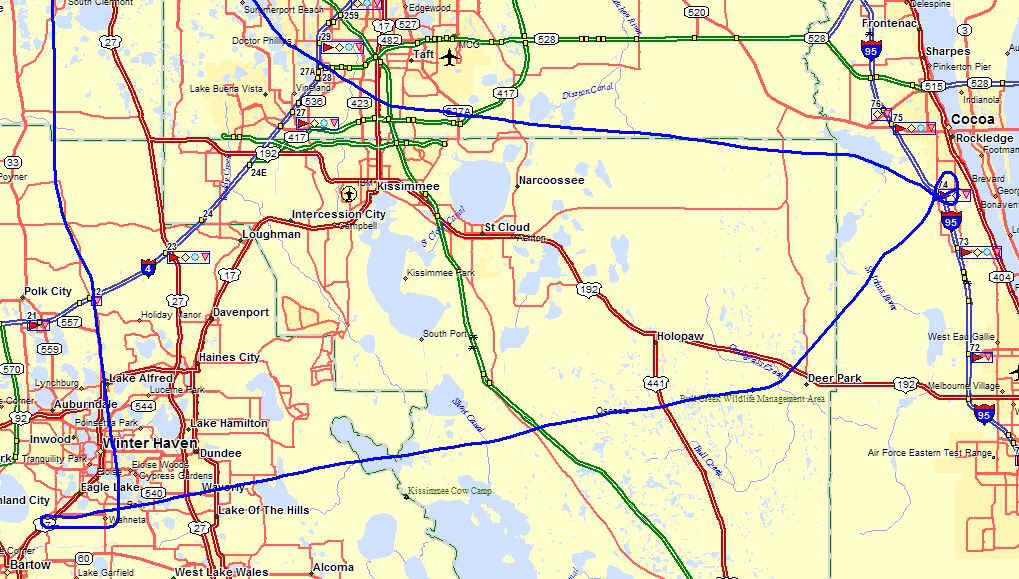 This part of Florida is near the center of the Peninsula that makes up all but the "Panhandle" of state.  There are plenty of towns with airports here.   One of my first flights in the state after I brought the airplane to Florida was to Winter Haven as seen beginning on PAGE 360 of this web site. 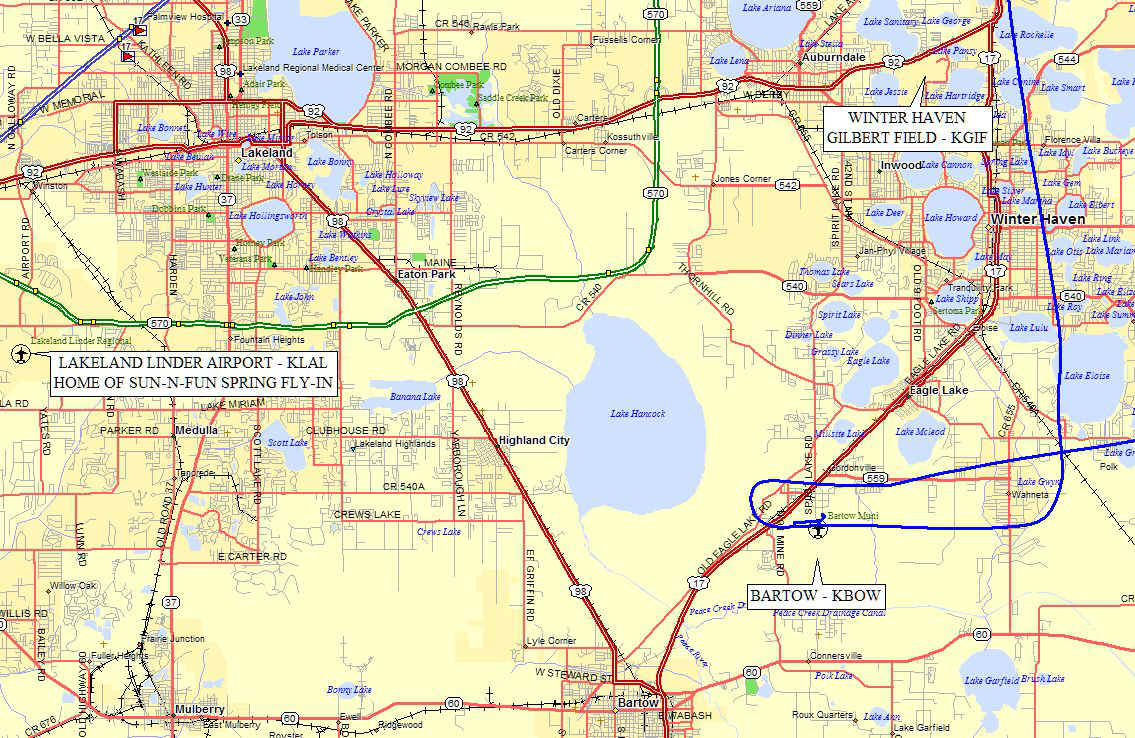 The ground crew parked me very close to the Bartow control tower. 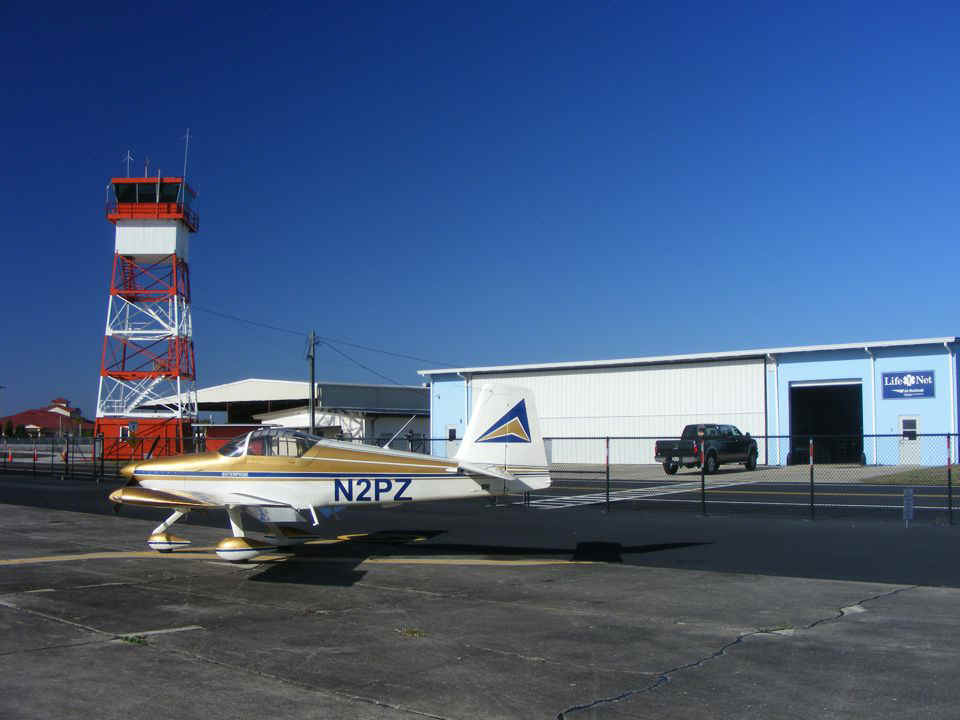 The view up the ramp toward the FBO shows some of the other visiting planes. 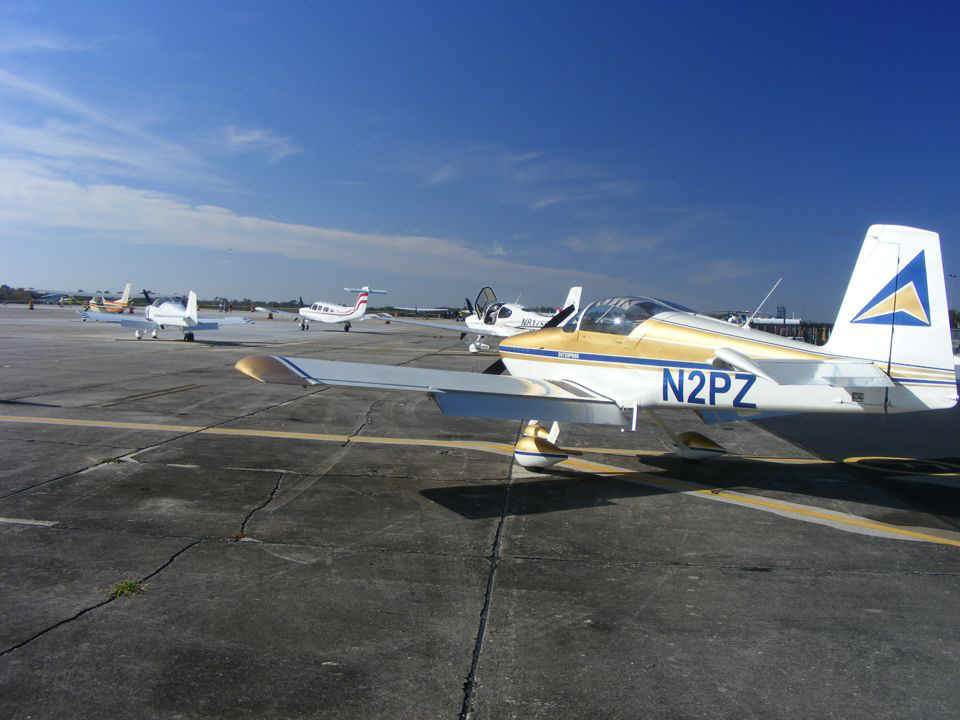 This RV-7A is based in Port Charlotte, Florida and is on display in front of the FBO.  There is a small museum room in the main building with information about this airport during World War II when it was a training base for fighter pilots in the US Army Air Corps.  There is also a restaurant here. 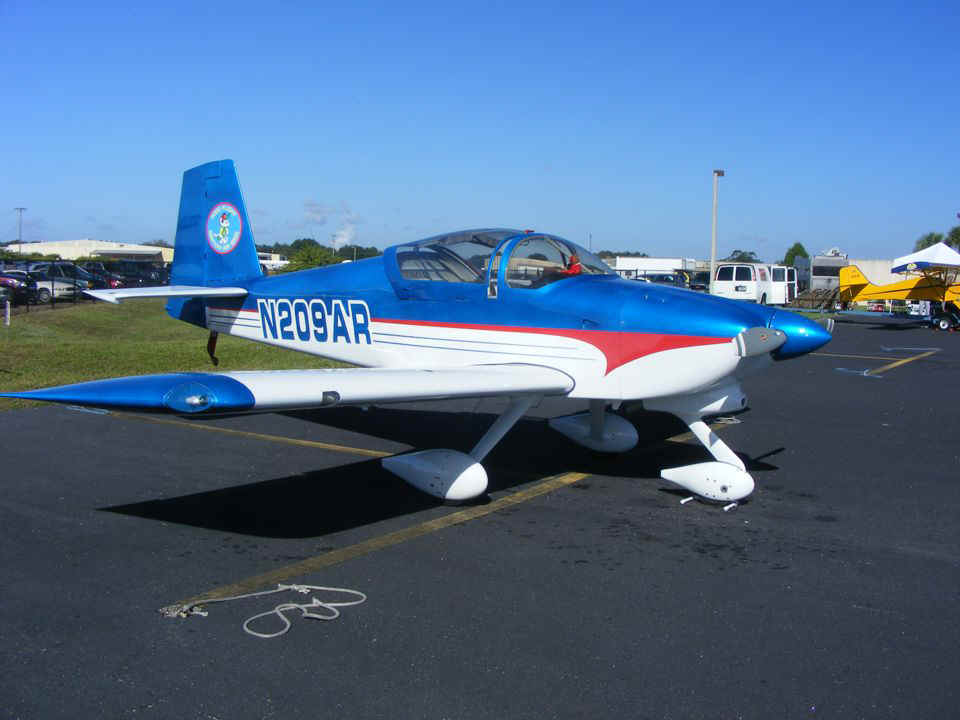 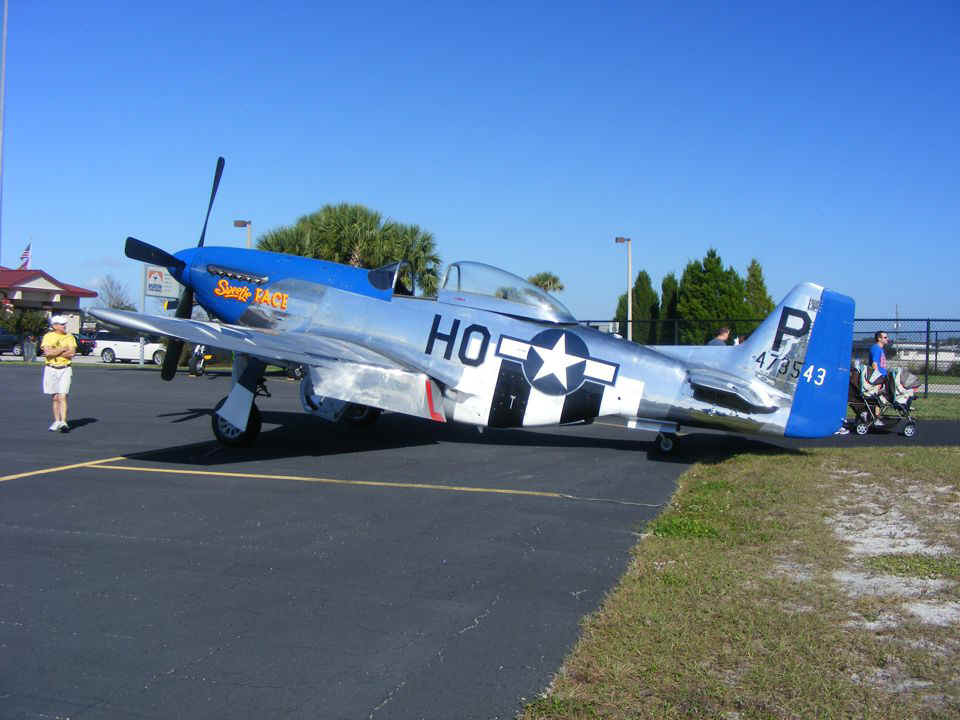 Here is a P-51 with wing tip fuel tanks.  This is not a configuration from W.W.II.  You can look this one up as it is controversial.  Use these items in a GOOGLE search and you may learn a few things:  N4222A, 44-13257.  Even though is has some Spanish lettering on it in places, some say it was never part of the Salvadoran Air Force.  There is information that is was part of NAA (before NASA) doing high-speed testing until 1949.  You may find this web page interesting with lots of photos.
http://www.mustangsmustangs.com/p-51/survivors/serial/44-13257   It is now based in Sarasota, Florida. 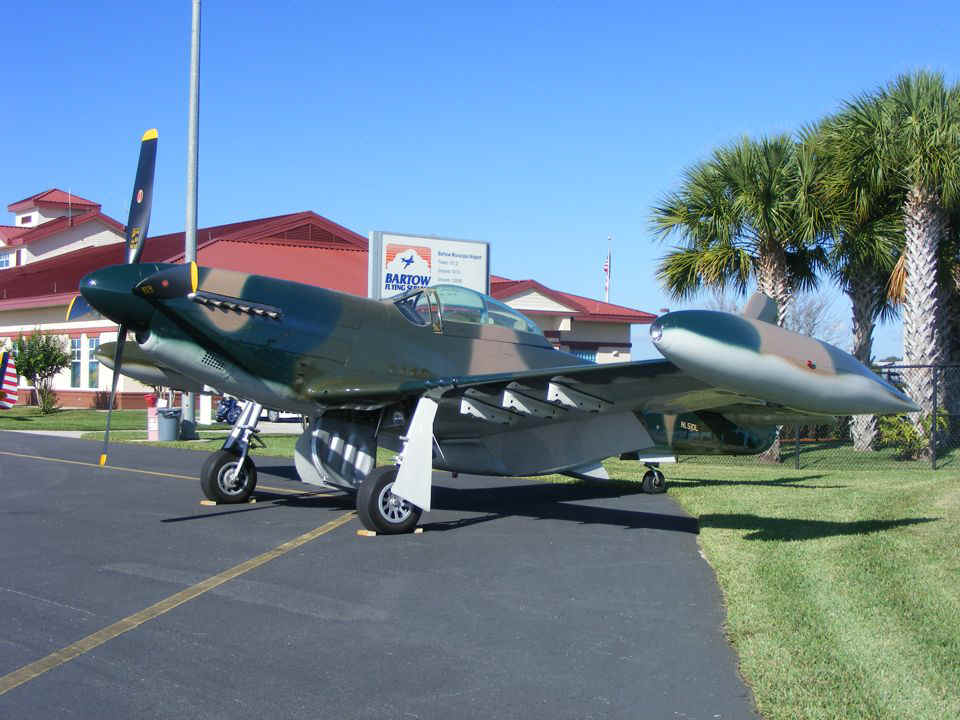 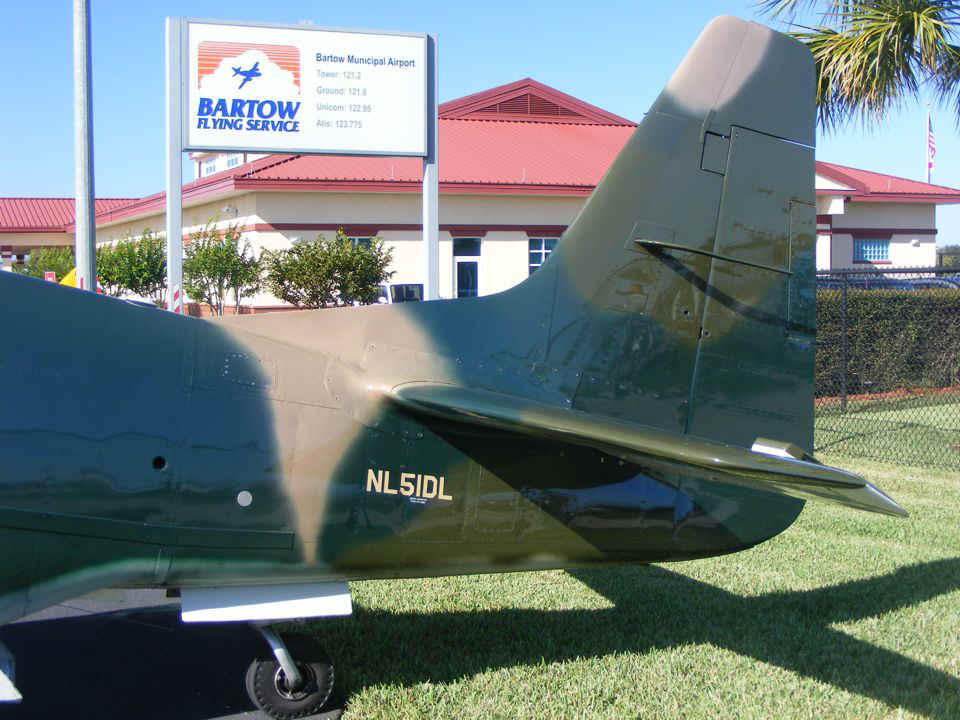 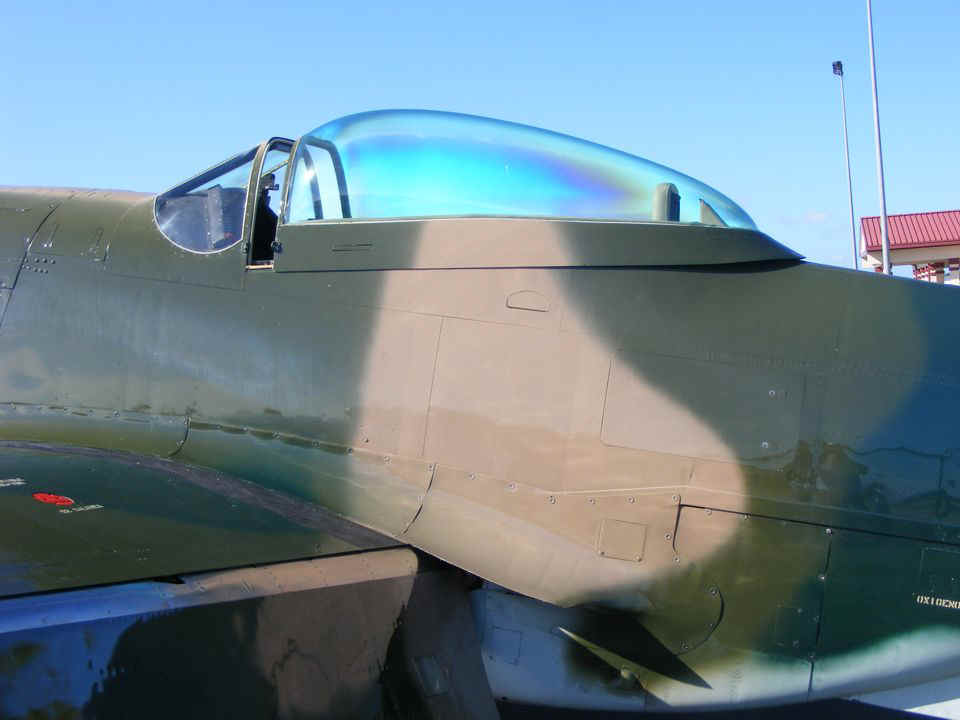 There were two more P-51 Mustangs coming in to land when I was heading out to the runway.  The tower was using both parallel runways when the traffic pattern got busy.  All the take offs were from runway NINE-LEFT (9L) near the ramp.