February 12, 2011:  The fuel run I talked about last week happened today in this great weather.  I had another slow startup like last week, but with the engine running, I monitored battery voltage and charging current and it seemed OK.  The short 80-mile flight up to Smithville, Tennessee (0A3) for AVGAS priced at $3.98 per gallon was against some headwinds under 20 MPH.  A Piper Arrow from Lebanon, Tennessee was in the pattern when I arrived at the airport.   He was landing downwind.  I noticed the FBO and fuel pumps were near the east end of the runway, so I used the same landing approach.  The tailwind component was 23 MPH at 300 feet AGL less than half a mile from the runway, but only about 8 MPH as I touched down on runway 6.  I pulled up behind the Piper at the pumps and got out to talk with the pilot and his passenger.  He asked me which model of RV I was flying.   I gave him one of my web site cards and gave his friend the card showing the other side of the airplane.  I made sure they compared the cards showing the different tail art before going over to check out "Enterprise" up close.  I explained the Roncz airfoil and my typical cruise speeds above 10,000 MSL and the 6 gallons per hour fuel burn I get at 160 MPH true air speed.  He liked the Dynon D10A and the winds aloft data it provides by comparing wind data and magnetic heading with GPS data. 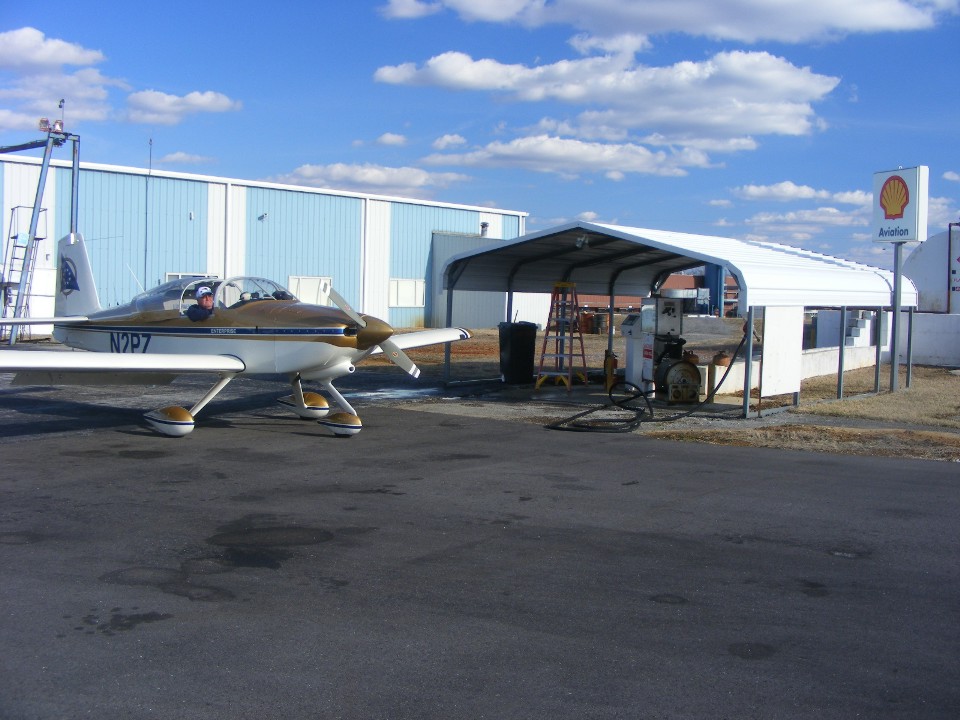 I got my fuel after they cleared the pump and took the usual ramp photo as seen above after filling the tanks with 22.2 gallons of 100 low-lead AVGAS.  My friend Ronnie was along for the ride today.  When I cranked the engine this time, the same slow turnover of the engine convinced me there is a battery problem that I will need to investigate.  The ride back to Chattanooga went faster with the wind working in our favor at 5,500 feet MSL.  I called Chattanooga approach as I crossed the Tennessee River west of the city and cut through the outer ring of the Class C airspace.  The ride was down below the top of Lookout Mountain in the Chattanooga Valley area and west of the Chickamauga Battlefield National Park.  I flew a standard pattern at Folks Field as the controller advised me of a Navy helicopter 1.5 miles east of the field which I spotted immediately.  I advised him it was not a factor as I was descending to land.   The landing was a good one with no bounce, even with a slight quartering tail wind of about 8 MPH as I crossed the threshold of runway 1 from from the south.  I did not need brakes as I rolled up to the ramp in front of the hangar.  Wendell came out to help put the airplanes away.  His yellow RV-8 lives in the front of the hangar and has to be moved out when I am going flying, then put in last after my RV-9A is pushed into the SE corner of the hangar.  The Hobbs meter got another 1.4 hours today to indicate 331.8 total hours since new after the two flight segments for fuel.  Here is the GPS ground track for today's flight (posted March 5, 2011).  The return ground track is the one closest to the word Chattanooga in the map below.

February 13, 2011:  I went out to the airport at about 3 PM today when the temperature was in the mid-60's.  The wind was blowing from the southwest today bringing the warmer temperatures.  It was in the mid-40's yesterday.  The blue sky was everywhere again today.  I went into the hangar and connected my voltmeter to the 12-volt accessory outlet that I use for trickle charging the battery.  I plugged in my TOP GUN soundtrack tape in the stereo in the airplane and turned on the power to the unit.  I kept the volume low and began monitoring the battery voltage on my digital voltmeter.  I started opening up the wheel fairings to put air in the tires.  By the time I was finished cleaning the wheel fairing and put them back together, the tape had played both sides.  The battery voltage was 12.2 volts when the tape was started and 11.9 volts at the end.  When I turned off the power to the tape player, the voltage jumped back up to 12. 4 volts DC.  This told me there is extra internal resistance inside the battery and why the engine just barely would turn over to get started.  I took off the top cowl and disconnected the battery.   As always I take off the ground connection first and saw evidence of a leak and the corrosion around the negative battery terminal.  A leak had developed after 6 and a half years since I purchased the battery August 16, 2004.  Here are the photos of the terminals. 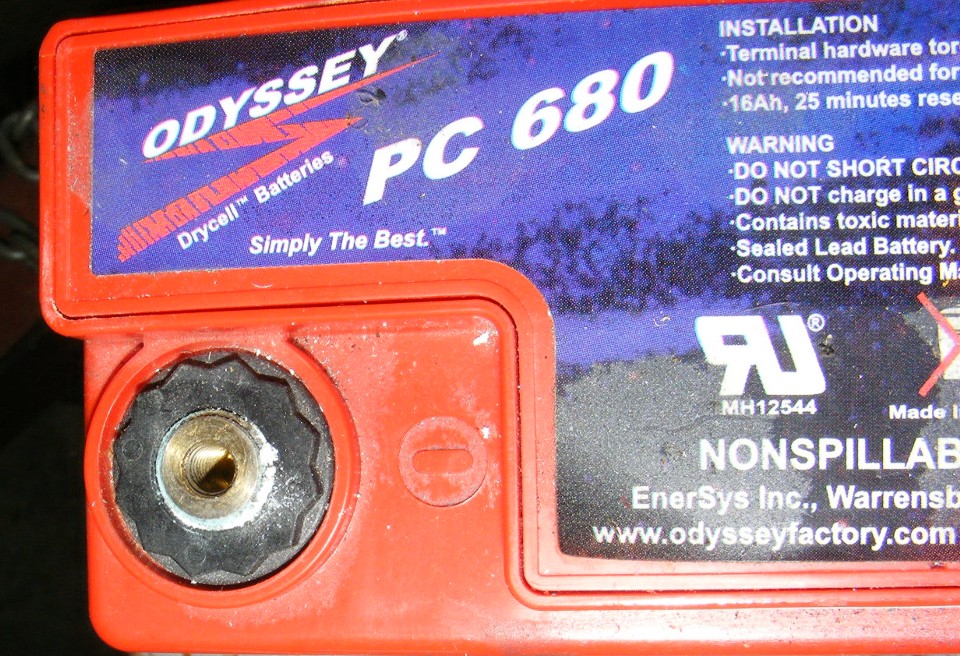 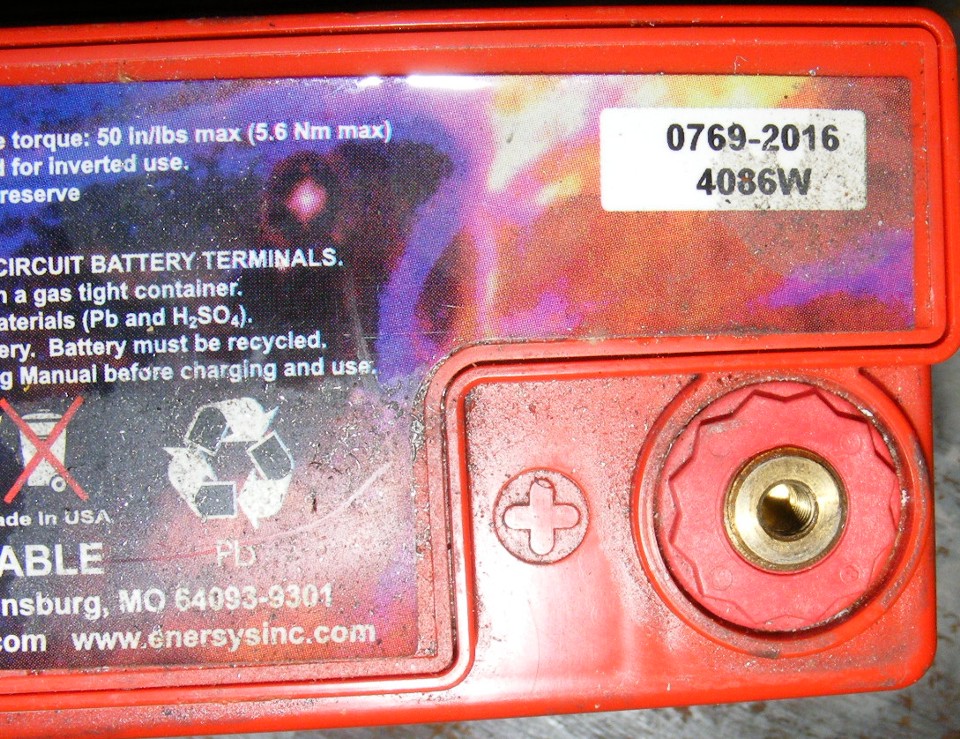 And of course the empty battery box on the firewall now awaits the new replacement Odyssey PC680 battery. 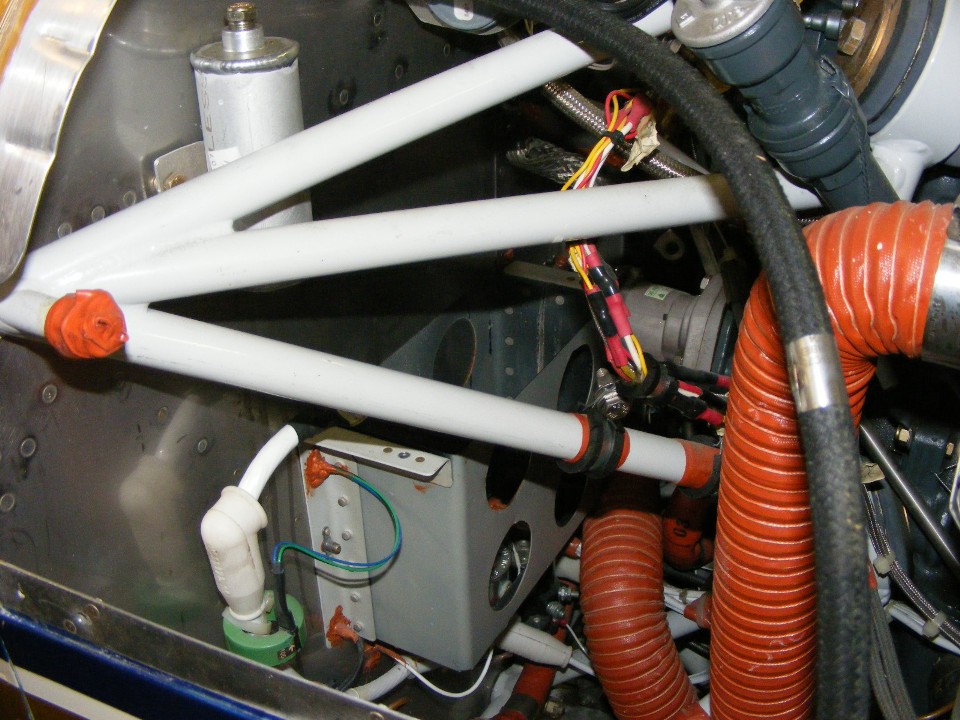 February 19, 2011: The new PC680 battery was delivered today.  I went over to the airport and installed it between 3 PM and 4 PM this Saturday.  I plugged in my battery minder and headed for home since the winds were gusting and there was no need to do a test flight.

February 20, 2011:  This was a day that I have been hoping would arrive ever since I started researching my family tree back in 1992.  A new-found cousin who is descended from my great grandparents on my father's side of the family came to visit for a few hours late this afternoon.  We shared our information and some photos.  She had the obituary from the Chattanooga newspaper from June 1911 about my great grandfather's older brother There is a second obituary published by the organization of Confederate Veterans that said very clearly he was born in Spartanburg, South Carolina.  This was a connection I have been searching for from way back when!  It should connect my family tree to the one researched by Pamela Brown Reid that links back to the young man who came to Virginia in 1635 from West Riding in Yorkshire, England.

February 26, 2011: It is Saturday again and time for a short flight with my genealogy research "cousin" Beth, and one for her husband Richard.  This is a local flight for her lasting about 30 minutes sightseeing over her neighborhood which is adjacent to the Lafayette, Georgia airport.  I did the flying and she took pictures with her camera.  I circled the neighborhood again with Richard aboard later. He had a better idea of exactly where their house was located.   He also asked me to fly about five miles further south to his parents homestead and he took additional pictures there. 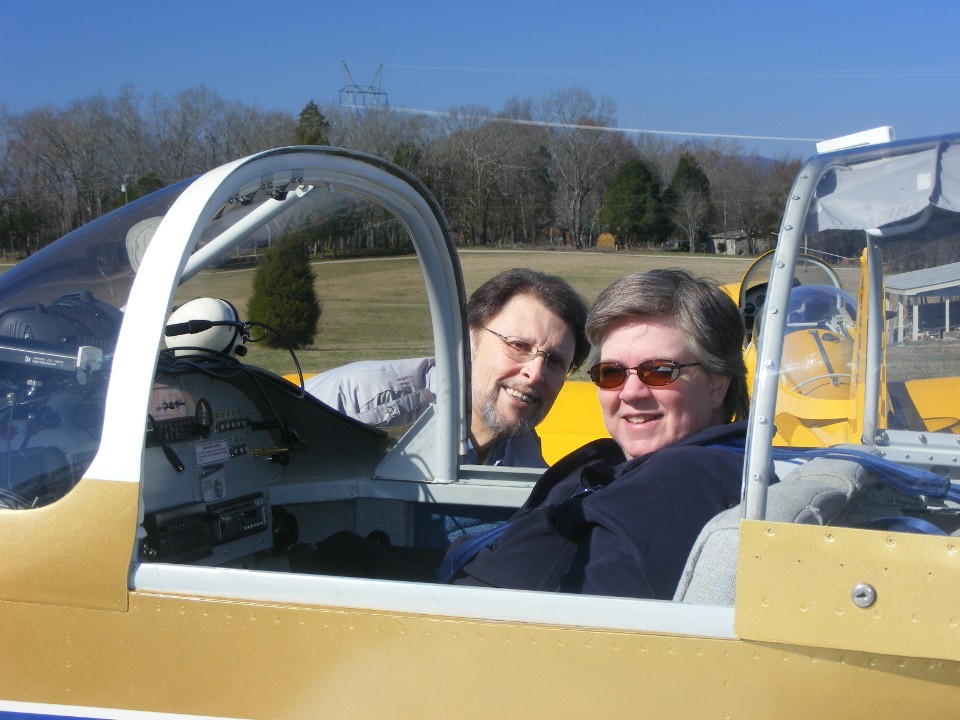 These aerial photography flights give me a chance to practice my "turn-around-a-point" maneuver that is part of the original flight test given to every student pilot when he takes the private pilot check ride with a designated pilot examiner.  The Hobbs meter got a total of 1.1 hours added to it today and the new battery installed last week started the engine easily for both flights.  The winds were from the south and the landings were from the north over the wires at the end of the runway.  I made a downwind pass over the runway at the end of the first flight, then

Here is where they wanted to go for pictures of their neighborhood and at his mother's home south of the city.

This is the overview of both flights today.

March 5, 2011: This is the following Saturday from the flight entry above.  Some much-needed rain has set in here in the Tennessee Valley near Chattanooga, Tennessee.  The rain is clearing the pollen from the air as a result of many trees and bushes blooming as the first sign of spring 2011.  It is a day for IFR flying in real weather.  The low-hanging clouds and light rain are perfect for training in actual conditions, but since I am not actively seeking my instrument rating, I am content to stay on the ground and wait for better flying weather.  A day like this one is great for catching up on posts to this web site.

I did get a bit of news this past week from my flying buddy Marty Mason.   He will be getting surgery on his elbow that should restore full use of his left arm.  He indicated he will want to get in some more flights after he has healed.   He has a steady hand on the stick when he flies my RV-9A.

March 6, 2011: This Sunday morning was overcast and "gloomy" with the temperature at 39 degrees and wind chill of 32 degrees when I snapped this photo from my open garage door.  The trees bloomed earlier this week and the pollen count was way up there.  The rainwater is still evident after the overnight rains that put the county under a flood watch in parts of the area.  The forecast for the week ahead has no freezing temperatures, and it is supposed to be clear and sunny next weekend. 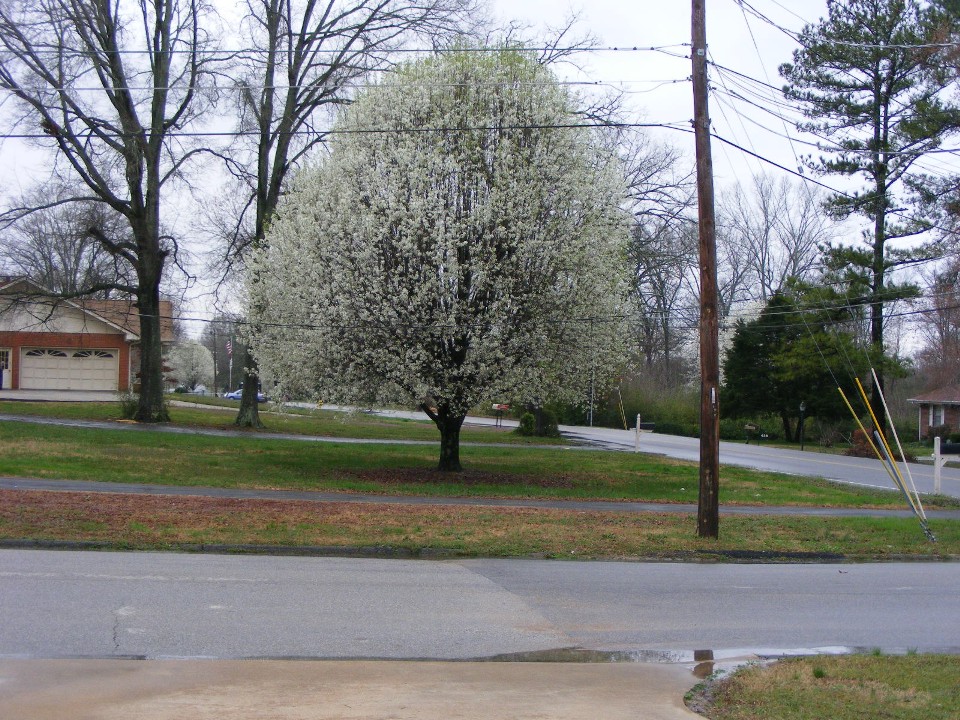 March 11, 2011:  I purchased the domain name www.n2prise.com today and pointed it to this web site which has been www.n2prise.org since I moved it to a dedicated commercial web server.  It will take a few days for that domain name to propogate to all domain name servers across the internet.