July 14, 2004:  After finishing all the riveting on the canopy, it was time to open one of the boxes from the firewall forward kit and get started.  The easiest thing was to take the pressure sensor manifold and drill that to the firewall at the front of one of the top ribs.  This thing will get an oil pressure sensor switch and one or two other sensors attached to it when the time comes. 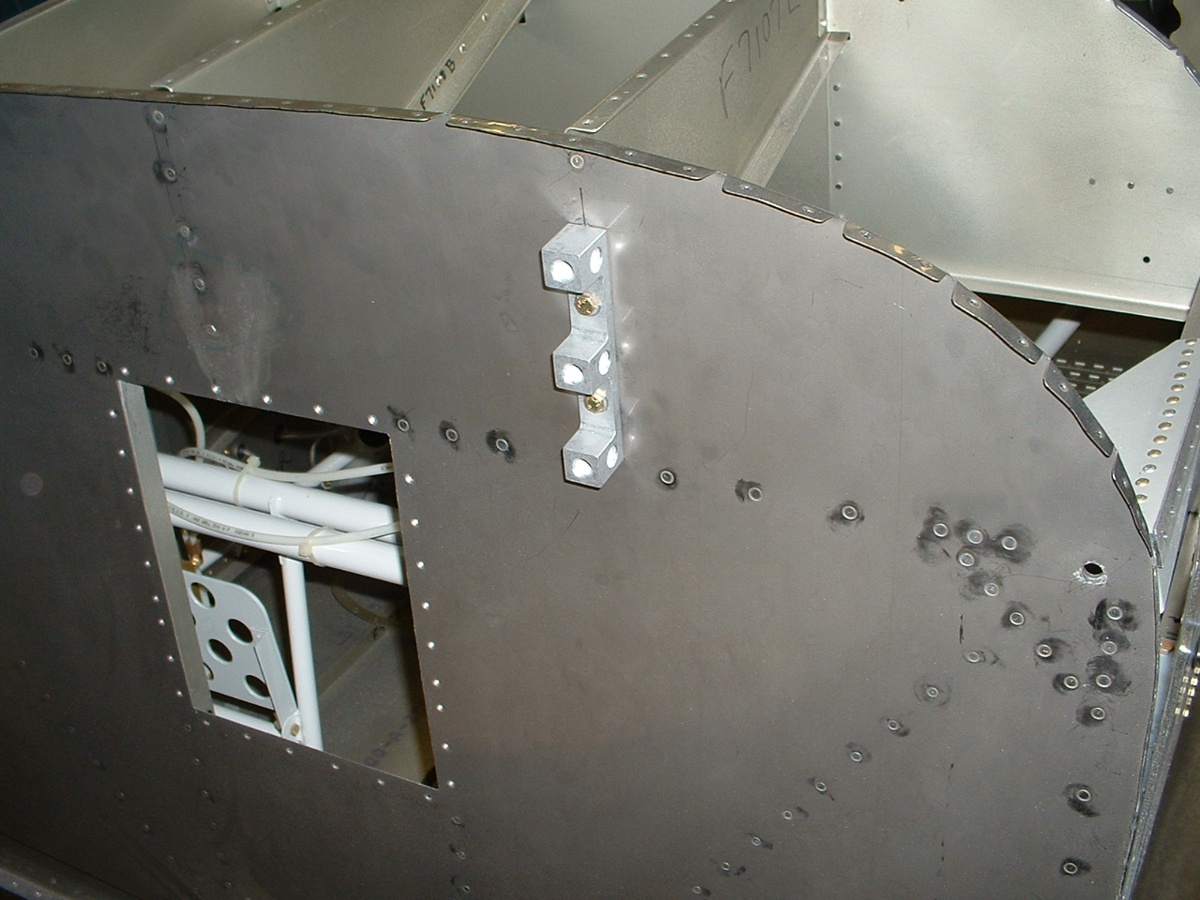 The second thing for the FF kit today was to open up some 2-inch holes to lighten up the weight of the battery box.  Since it is made of steel, not aluminum, there was a lot of gnashing of teeth and dulling of a hole saw before I realized that the best way to conquer this thing was in little steps with a 1/8" drill bit where the circle fell from the hole saw through the black paint.  There are more pieces to rivet onto the box, but that is for another session...stay tuned to this channel. 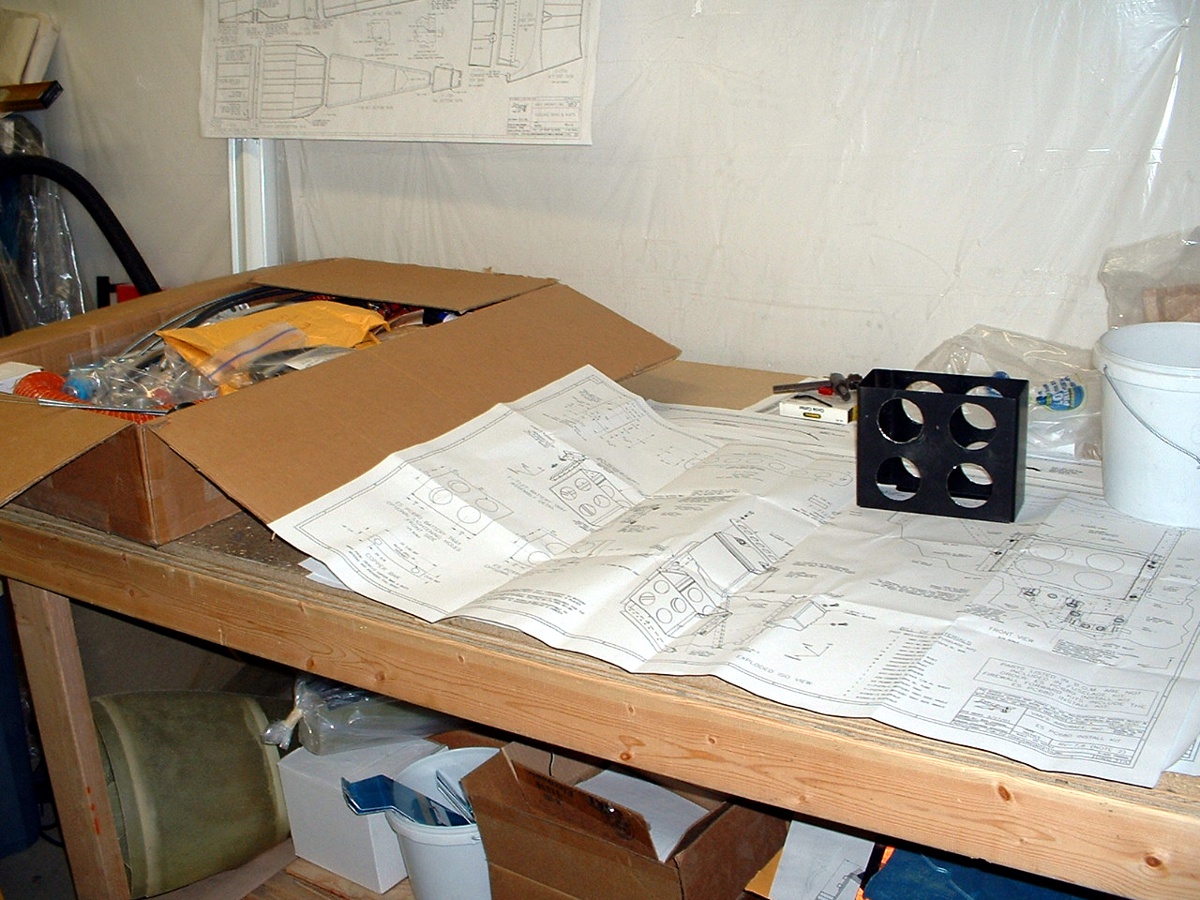 By the way, that box on the left end of the work table was repacked after I took inventory of the kit.  Most of the "stuff" that I will be using over the next few weeks is in there.  At the bottom of that box is the Vetterman Exhaust System.   As I was cleaning up some trash for garbage day tomorrow, I noticed that all the newspaper that was used as packing came from Rapid City, SD -- near the home of Larry Vetterman.  That box was the one used to ship the exhaust pipes to Van's.  It had a lot of other things added to it along with more packing and then it was shipped to me along with another bigger box that had things inside like the filtered air box, engine cooling baffles, and a 60-ampere alternator.  That alternator is in the white box at the left end of the shelf at the bottom of this picture.

August 12, 2004:  I have returned from Florida due to a change in plans.  It had something to do with a tropical storm and a hurricane threatening Florida.  Since I could work at home and did not want to get caught in an evacuation of parts of Florida, I left Miami Tuesday afternoon and drove up to Ocala, Florida to spend the night.  I got home late Wednesday afternoon, August 11th.  I claimed my mail at the post office Thursday morning and found two boxes waiting for me.  One was from InAir Instruments and contained my Lift Reserve Indicator that will serve as a visual stall warning indicator on my instrument panel.  The other box was from SafeAir1 and contained my ELT and a wiring harness for the Dynon EFIS-D10A.  The Dynon unit and the other accessories will ship factory-direct in a few weeks.  I will post pix when it arrives.

August 15, 2004:  I can now turn my attention back to the front end of the airplane.  Here are two pix to show that.  The steel battery box had previously been drilled with lightening holes to save weight.   Now it has the mounting brackets match-drilled and riveted in place. 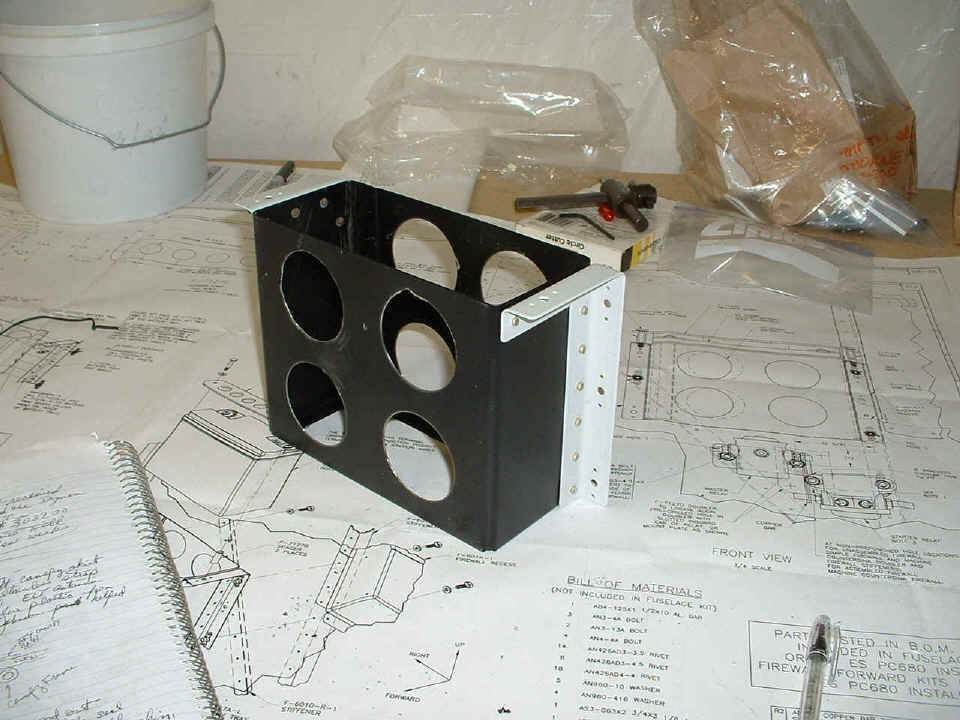 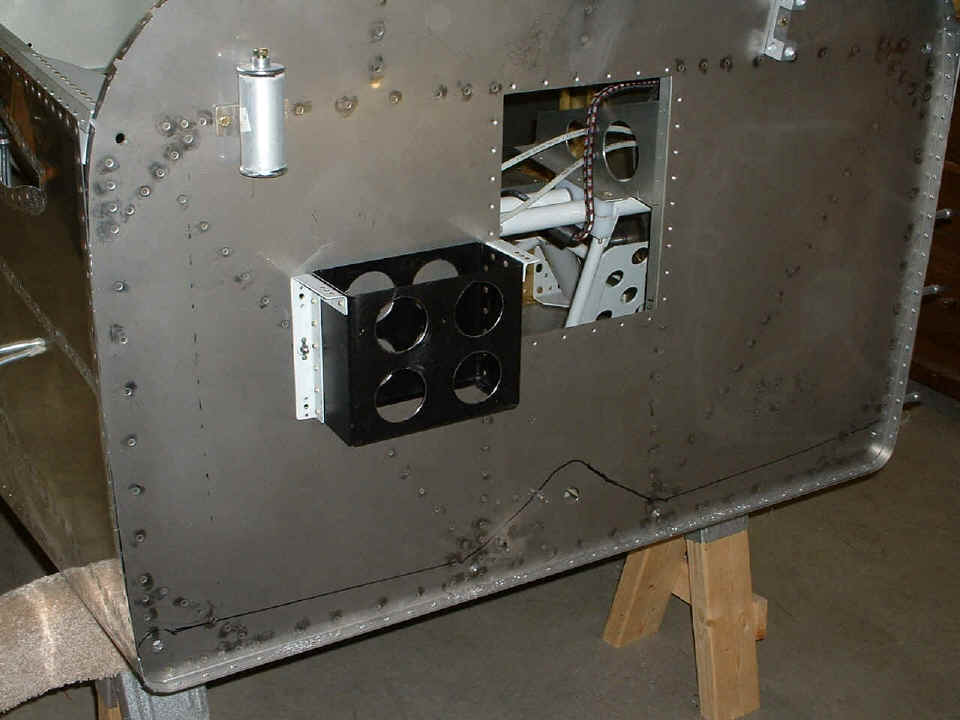 The battery box is now drilled to the firewall and I called it a night around 9 PM in order to have time to post this pages and the new pictures and text back on page 51.   I also ordered the Odyssey PC-680 battery tonight.   The total construction time on the airplane is now at 1260.4 hours.

August 16, 2004:  I managed a couple of hours tonight to get the battery hold down strap built, then fabricated a doubler plate to mount solenoids for the master switch and starter.  I have temporarily attached the ground and positive cables to the appropriate places.  You can also see the two copper bus bars that I made to connect from the master solenoid to the starter solenoid.  Van's designed the mounting of the starter solenoid so that positive "G-forces" cannot close the starter solenoid contacts.  The PC-680 battery shipped today from Jacksonville, Florida and should be here on Wednesday the 18th.  There is also a battery charger ordered as well.  This was the day I ordered the Garmin GTX-327 radar transponder, a blind encoder, radar antenna, and coax.  All those items are from LaFayette Avionics in Indiana.   Add another 3.7 hours to my total work time. 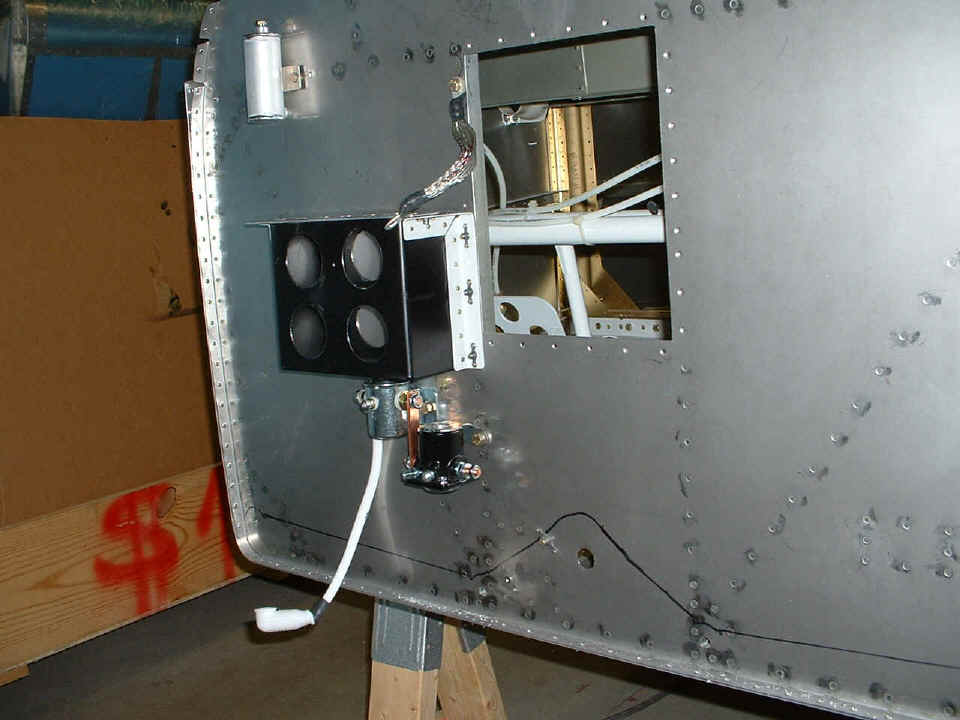 August 18, 2004: The battery I ordered has arrived via UPS from Jacksonville, Florida.  As you can see, I have it installed and only the positive terminal is installed.  I also cut the aluminum tube spacers that keep the hold down strap from pushing down hard on the battery case.  The negative terminal is disconnected from the battery for now.  I checked the voltage and it reads 12.76 volts.  The shop charger that I ordered is due to be here tomorrow.  I also checked the master switch solenoid and it works of course.  I ground off a little bit of one mounting ear of the master solenoid to allow for a perfect vertical alignment of the copper bus bar going down to the starter solenoid.  I started to look at the various wires provided in Van's wiring harness kit and have counted the fuse blocks needed, number of switches, etc.  More stuff to acquire... 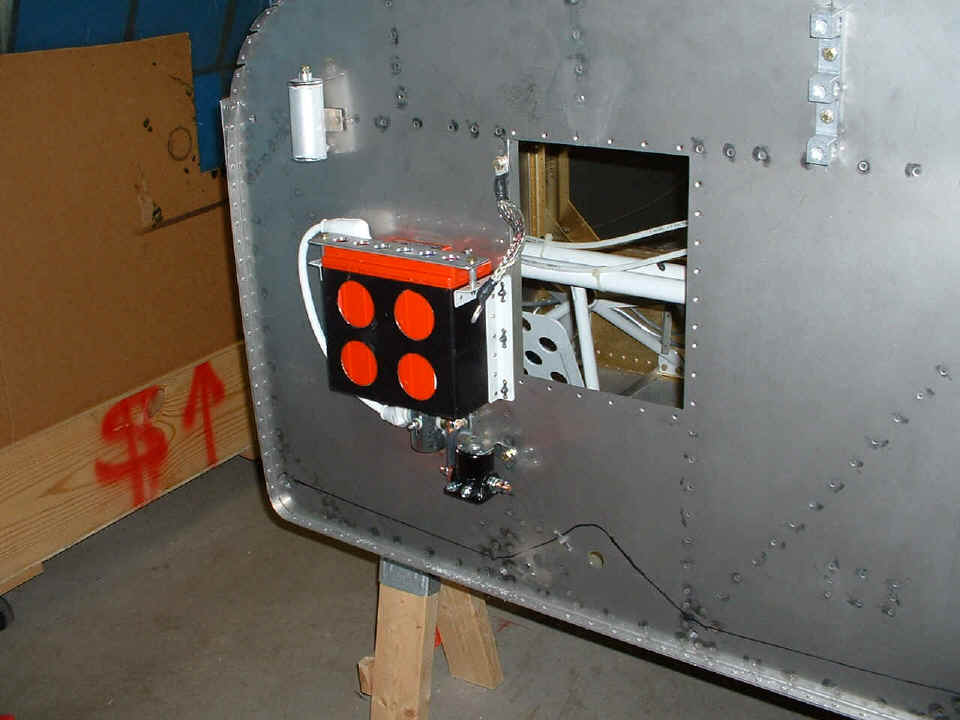 August 21, 2004:  A short work period today where I removed the instrument panel frame from the fuselage and installed the second rail for mounting the radio stack.  I was waiting until I had a radio tray to do this job.  My thinking was correct.  I found that my cuts into Van's original panel were "less than perfect".   I did some filing on the edge that already had an angle riveted in place.  I also needed to file along the top half of the right side of the radio stack opening to make the two sides parallel.  I am still working to get the side brace panels on the Garmin 327 mounting tray to hold the rear of it steady.   Here is how I left it at the end of the day.  You can see the #6 screw sticking through the platenut near the bottom of the rail on this side of the tray.   That panel with the holes in it sitting along side the transponder tray is 1/2 of the "big battery" tray that came with the kit and I am not using it as a battery tray (obviously).  Of the six rivet holes already punched in the panel, I will probably use three of them to attach the panel to the mounting rail.  What you don't see is another screw hole similar to the one near the aft end of tray on this side.  That hidden screw hole is the one that will be aligned with a new hole and #6 platenut in the panel below.  I have another panel already made from the other half of the battery tray that will go on the other side rail of the radio stack.  I should finish all that work tomorrow and you will see the pictures then. 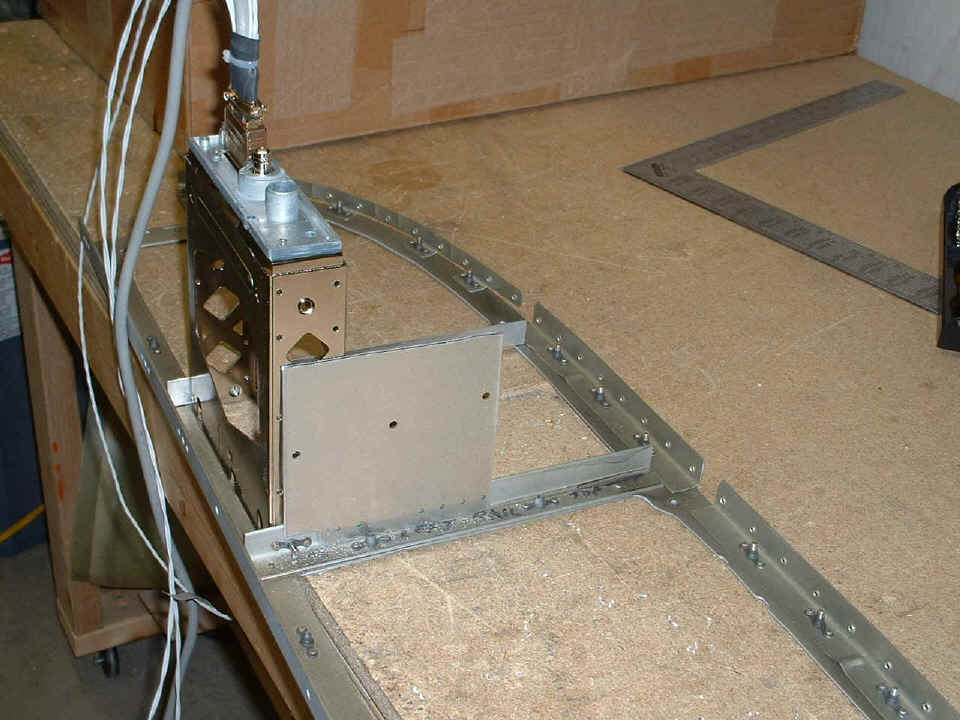