May 24, 2015:  Memorial Day is the un-official start of summer in the USA.  The real FIRST DAY of summer is still a few weeks from now, but that does not stop the vacations from happening now until Labor Day weekend in September.

Now, the news for N2PRISE and friends.

May 16, 2015:  My first flight with my new medical certificate was with Bill Blackwood down to the Fort Pierce, Florida Airport for lunch in their restaurant.  The total flight time for the day was 1.5 hours on the Hobbs Meter just flying up and down the coast line in VFR conditions with the usual coastal clouds.  I made two "DAY FLIGHTS" from Chattanooga to Fort Pierce in May 2007.  Those two weekends were the only times I have ever flown into get lunch with a passenger at the Tiki Restaurant on the field.  The story about those flights begins on my PAGE 236 via this LINK.

The landing today was with a stiff breeze from the beach with runway 10 RIGHT in use.  They built another parallel runway on the north side of the field, mostly used for flight training.  The lady in the tower asked me to cross over the middle of the airport on a 180 heading above 1,500 MSL for a RIGHT DOWNWIND to runway TEN RIGHT.  The magnetic variance changed enough since 2007 to re-number the runway from 9 to 10R.

It is LATE and I need some rest.  I will upload new flying photos tomorrow, MONDAY and Memorial Day Holiday in the USA.  The GOOGLE EARTH GPS files are ready for Touring to New Mexico and back to Folks Field from October 2005.  My simulation of the Columbus, Ohio departure of Jerrie Mock is also uploaded and ready to fly to Bermuda.   I created a "GPS" file for the departure using the "NEW" runway in Google Earth.  It was not there in 1964 as seen on this web page.

May 25, 2015: I am rested and back at the computer to post the following photos from the flight last weekend on May 16. Bill gets to pose with the FBO and Airport Tiki Restaurant in the background.  I had to put my rudder gust locks in place while we were inside.  You can see how the wind from the East is affecting it.  The nose of the airplane is pointed northwest. 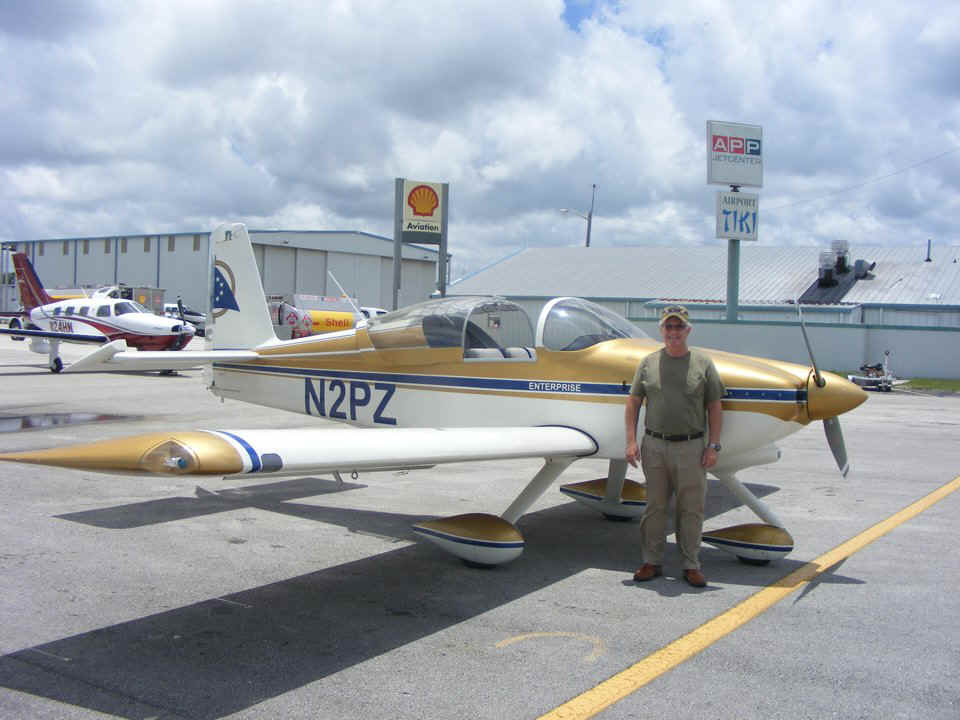 Airborne again and I get to take some photos while Bill keeps us on a VFR course clear of the clouds near the shore line.  This view is looking west at the Valkaria Airport located south of Melbourne, Florida and near US 1 and the Indian River.   The airplane is above the barrier islands to the Atlantic Ocean. 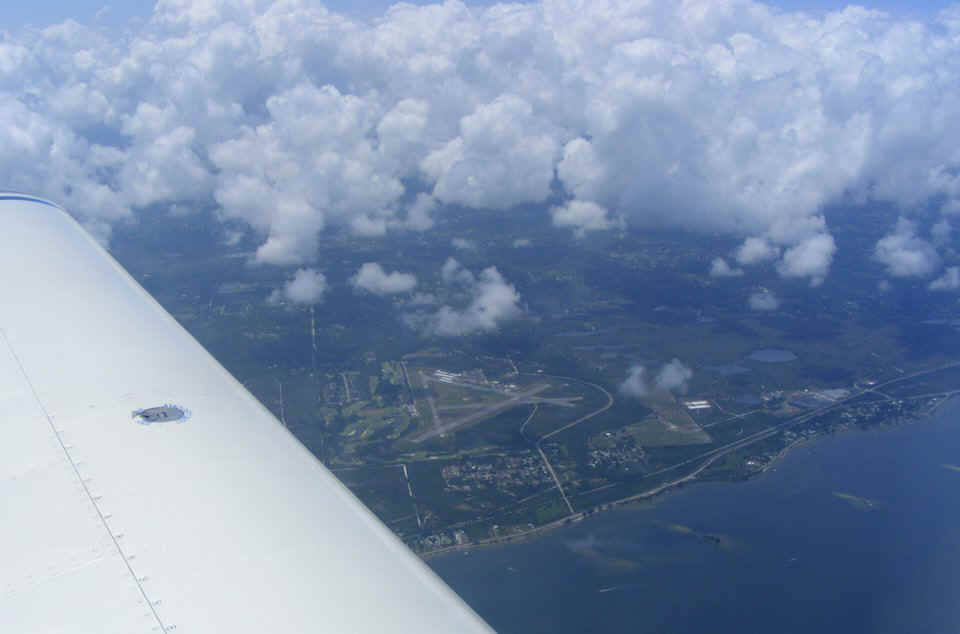 I was able to point and shoot this image without a view finder alignment on Bill sitting beside me. 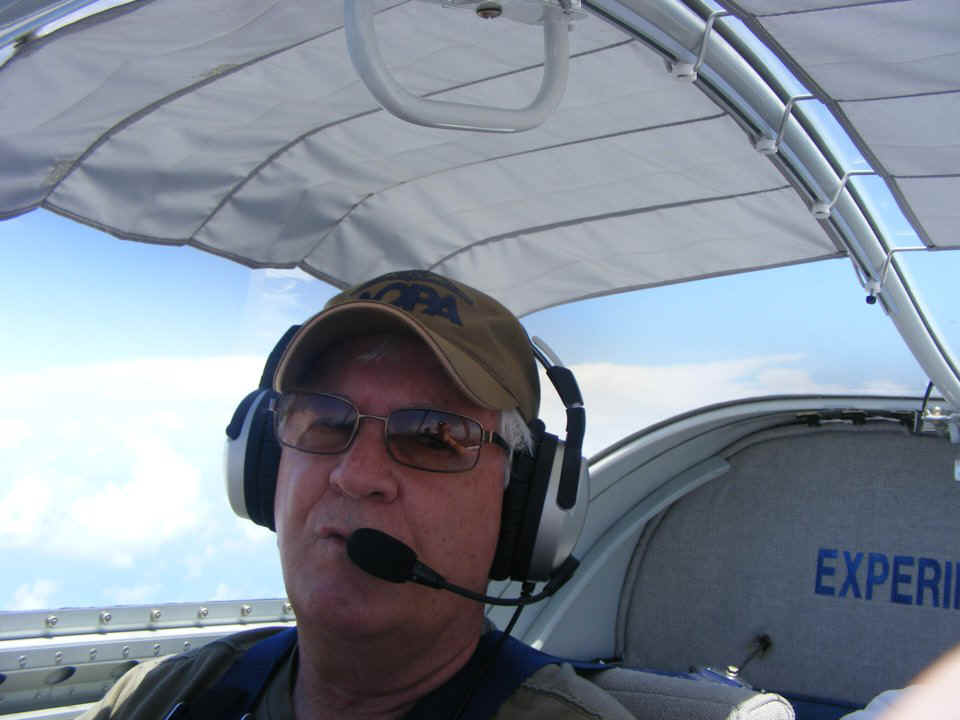 I gave control of the airplane to Bill while I was taking these photos.   The request was "go that way" and remain VFR (clear of clouds). 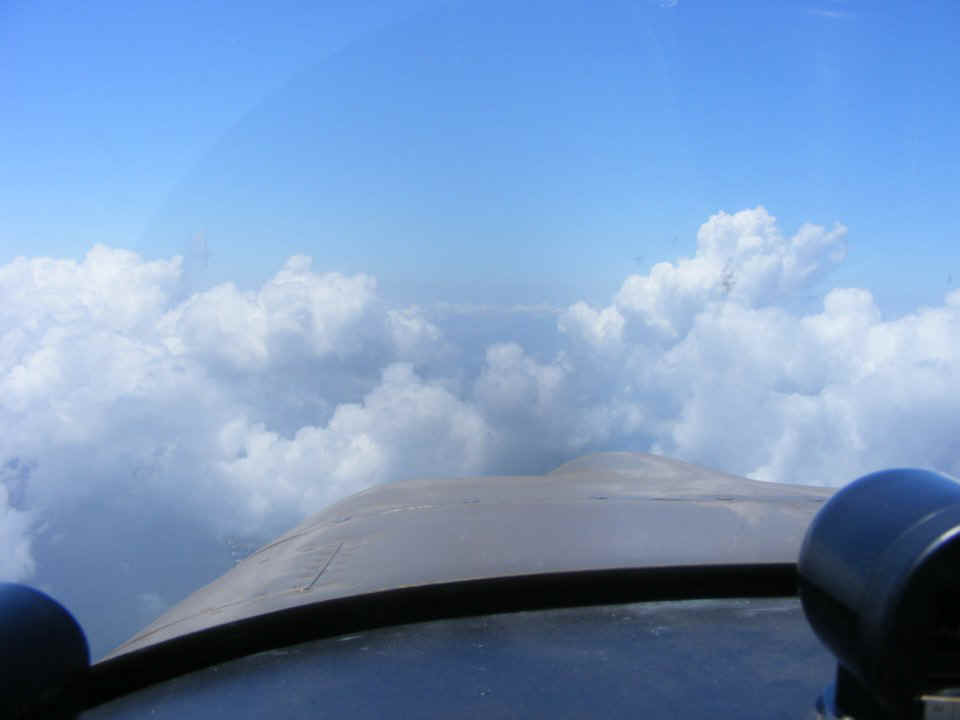 Now sometimes you get lucky and see something interesting in cloud shapes. 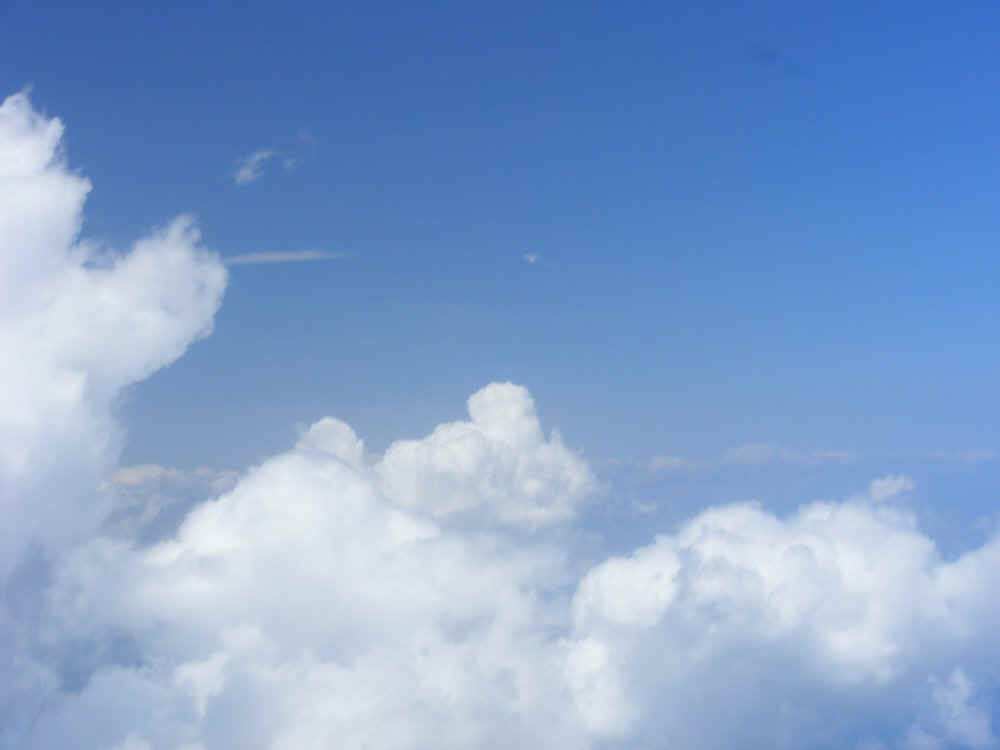 I quickly pushed the zoom lens on the camera and took a second photo before the object of my attention was out of sight behind a closer cloud.  It is Enterprise B with a cloaking device operating in the atmosphere. 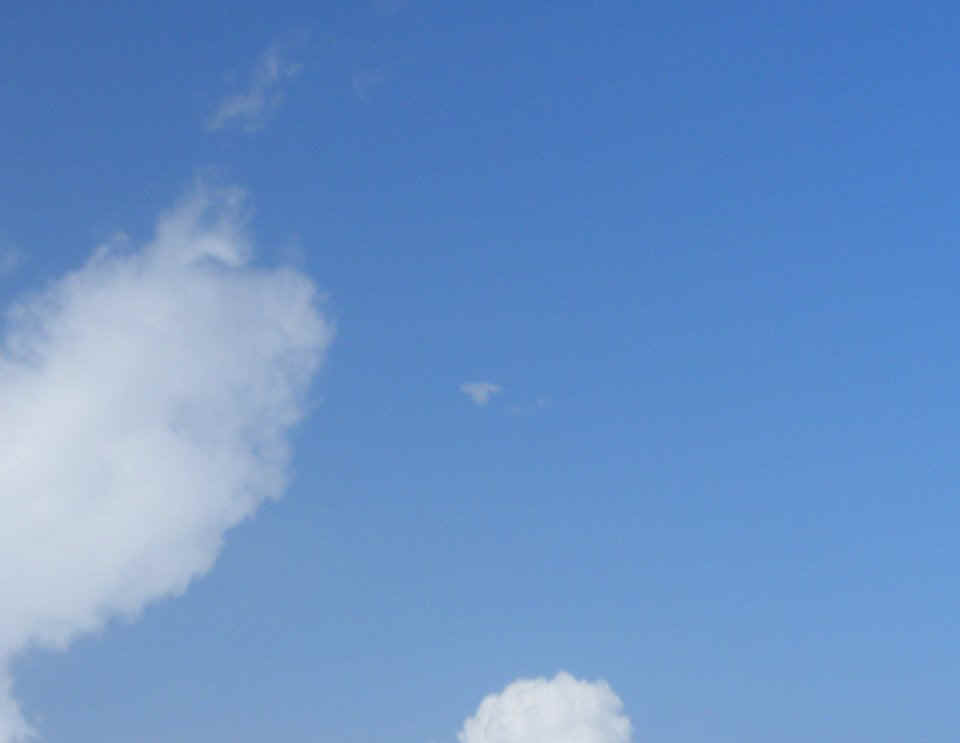 Here is the view of the barrier island up to Cocoa Beach after passing over the clouds.  We were over the top of Patrick Air Force Base and called for permission to circle down from 5,500 MSL to around 1,900 to duck under clouds over the mainland west of the Indian River Lagoon.  I made sure I called Patrick as their Class D air space is up to 2,500 MSL.  The approach to runway 36 at Rockledge Airport had a 17 MPH cross wind from the East (typical ocean breeze). 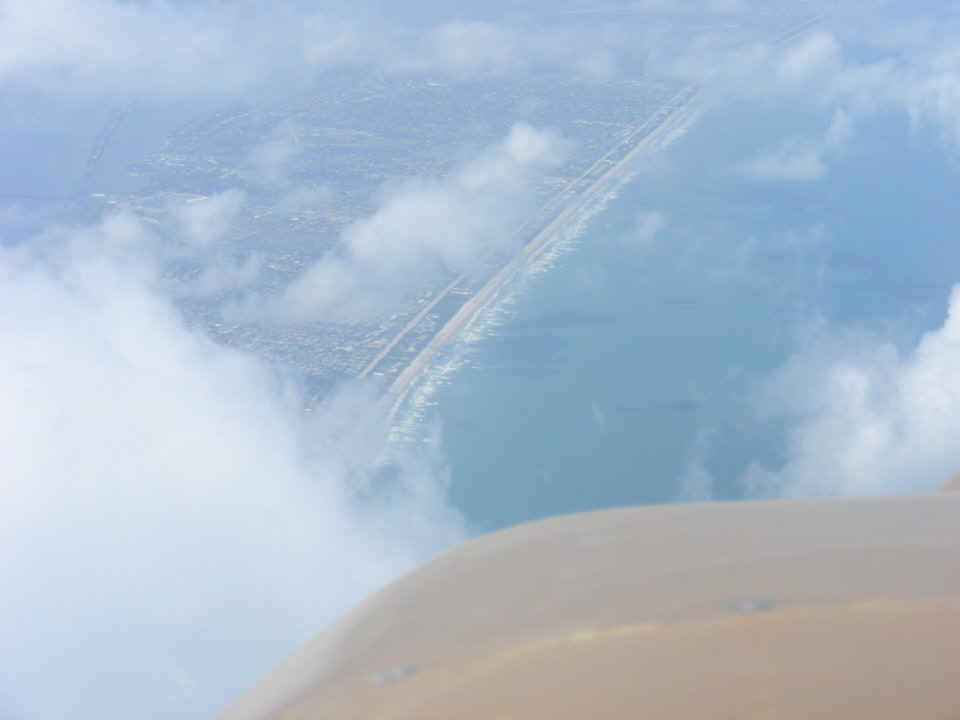 Back in the hangar, Roosevelt Sr. is sanding the filler after a modification on the engine cowl of a Rutan Long EZ. 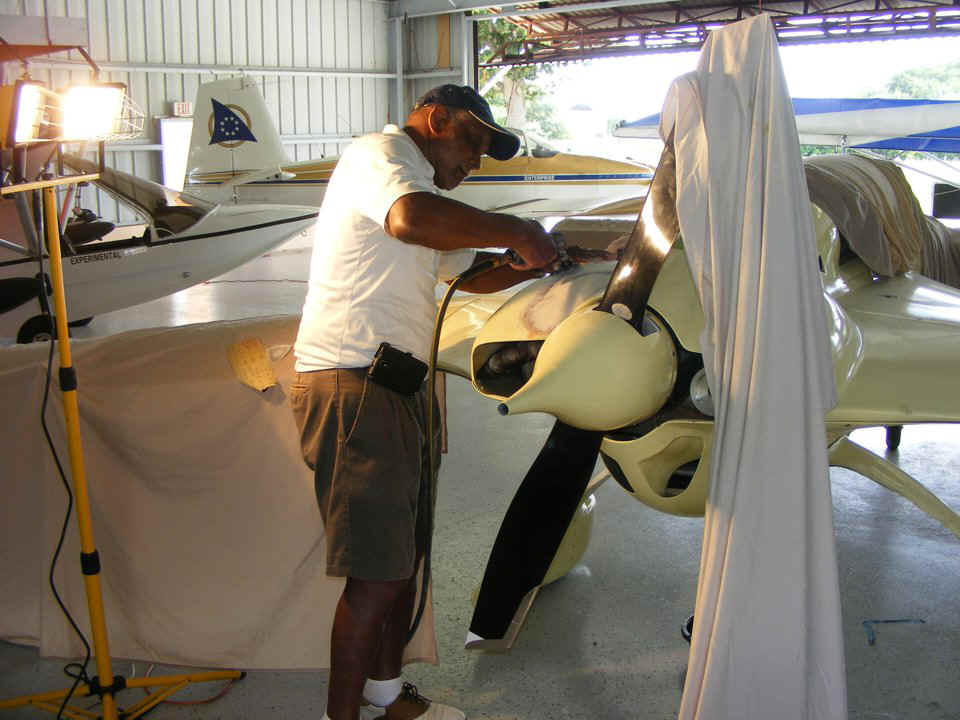 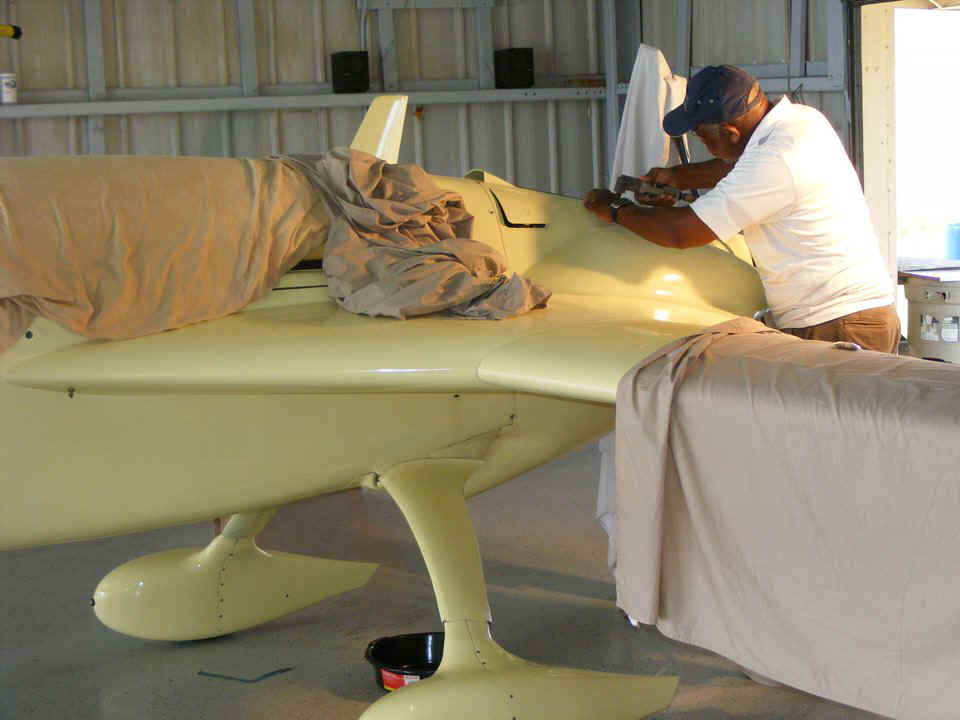 Bill meets Roosevelt Junior and the discussion is all about the EZ airplanes.  Their other plane is the Vari-EZ single-seat airplane. 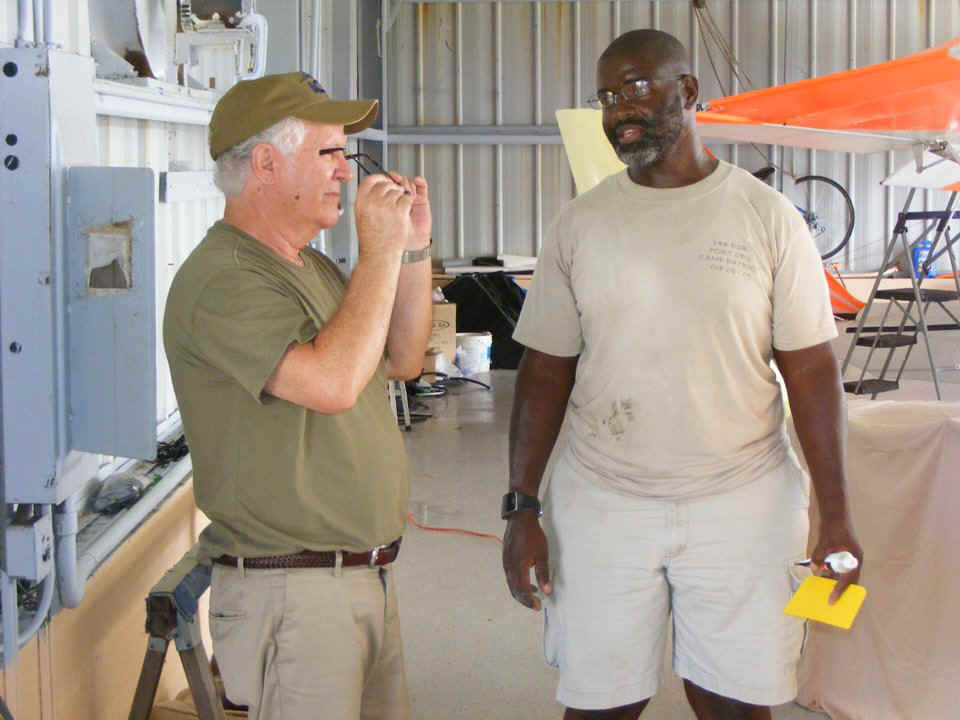 The wider camera view shows high-intensity taxi lights on  the front of the wheel pants.  The hint here is they are small, round, and pointing forward. 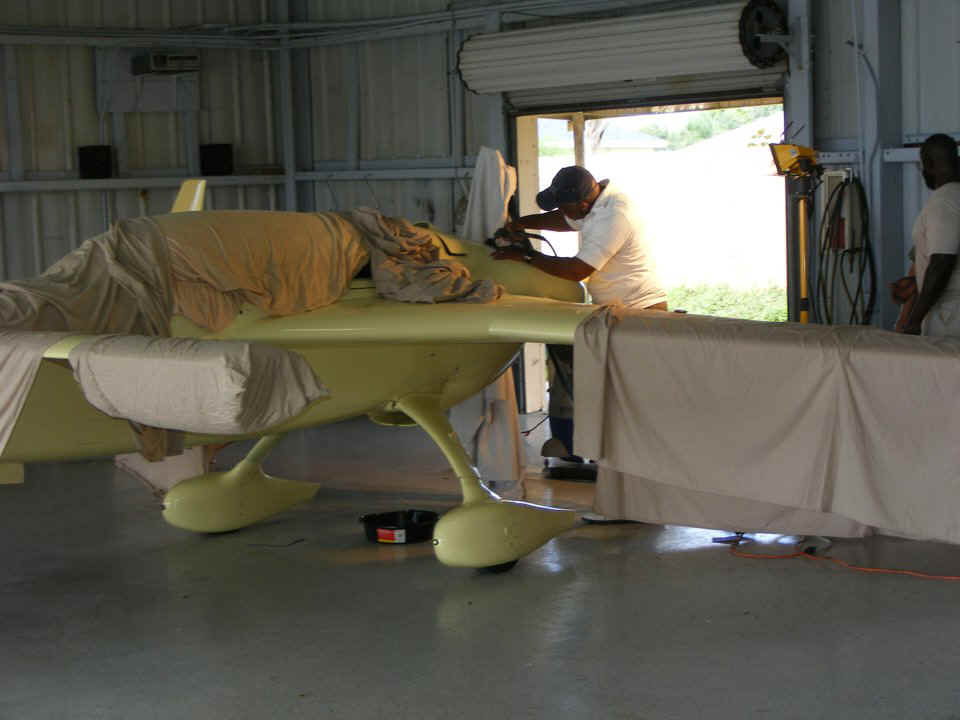 I can now get back to work on the Google Earth virtual flights.  More to come soon.

May 28, 2015: I have uploaded TWO new files to my Google Earth Tour MENU page.  I am working to create a GPS log file on the Jerrie Mock project for the flight from Casablanca, Morocco to Bone, Algeria.   This is dull repetitive data transfer to a dummy GPS file, but the results are worth it.  We get to fly with Jerrie around the world.  The flight from Columbus, Ohio to Hamilton, Bermuda on first day is already posted on the Google Earth Tour MENU page.

June 4, 2015: The GPS flight from Casablanca to Bone is actually THREE files that can be viewed in Google Earth tour mode.  The 2007 file shows the old airport departure.  Google Earth showed the area filled with rolling terrain.  When I got the first GPS file completed, I began flying the route and found MANY bad map segments with poor resolution.  All I had to do was to change the YEAR in all the GPS data points and everything looked much better, except the airport at Casablanca was demolished and city streets cut across the old airport property.   As for the rest of the flight, it all looked better up until it was time to land at Bone Airport.  The 2007 image was apparently shifted a number of feet from where it was moved in the 2011 and 2014 files I created.  Try them all to see the subtle changes in resolution of the images.  I had to correct the runway flight path for the new files to hit the center of the runway at Bone.  I have given some thought to making the departure from Casablanca from the NEW airport there.  We shall see...anybody want send me an email about that issue?

I want to create the flight from Bermuda to Santa Maria to see how Google Earth will display the overnight flight, sunrise, etc.  That should be an easy file as it will only need data points for the takeoff and landing and a few points in between over the empty ocean.