April 29, 2007:  The old Fuji digital camera is officially retired after the beating it has taken since I got it in November 2002.   It has served me well in publishing this web site, but it finally has problems that are not easily fixed by restoring a loose connection, etc.  The old 2650 could take 2-megapixel photos, while the new Fuji S700 takes up to 7.1-meg shots.  I took this one using 2-meg settings and reduced it from 1600x1200 to 960x720 for the usual display size on this web site. 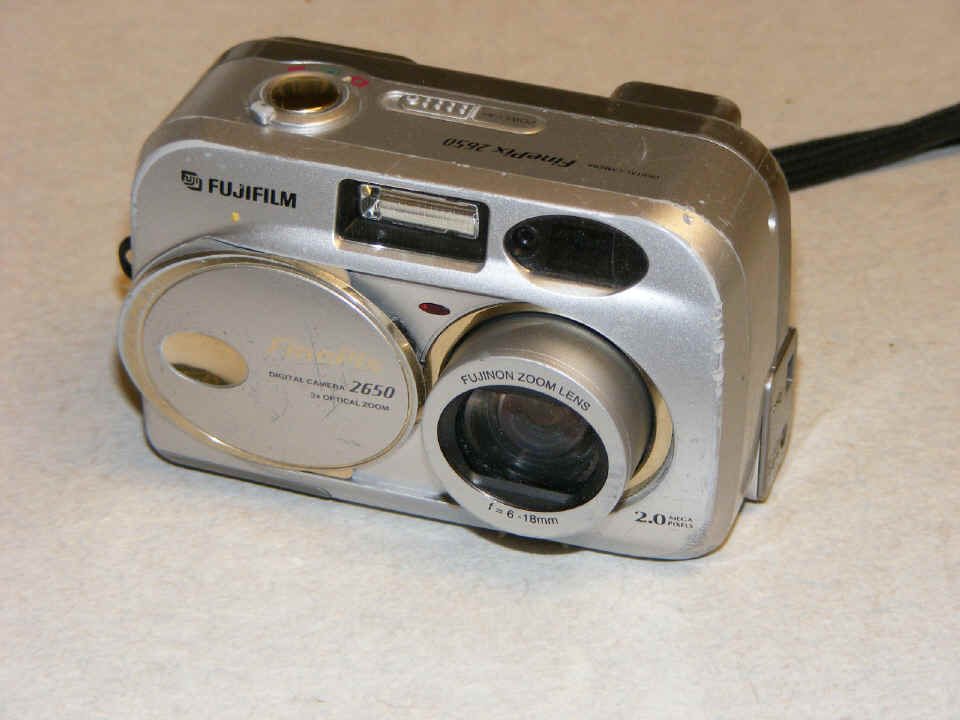 Here are the web advertising photos of my new camera that took the photo above and all that you will see going forward on this web site.  The new feature for me on this model is the ability of the camera to use 46mm filters in front of the zoom lens.   The big advantage will be the removal of reflected glare seen on the inside of the windshield and canopy in some of my cross country photos.

I also worked with Wendell on Saturday afternoon to add cooling baffle fabric to his RV-8.  To see those photos from the new camera, CLICK HERE for his latest page.

May 5, 2007:  It was another Saturday afternoon session with Wendell.  I also took some time to cover part of the hinge openings on the elevators of my RV-9A.  Some RV-9 owners talk about the "whistle" that comes from the -9 is caused by the oversized openings for attaching the elevators to the horizontal stabilizer.  I have put some clear UHMW tape across the gaps to see if that is true.  I will know the next time I fly Enterprise.

I got a call from Florida regarding my day trip mission scheduled for next weekend.  It looks like the flight will end at Fort Pierce at the Tiki Restaurant located on the field.

May 12, 2007:  The trip to Florida today looked good according to the weather forecasts.  I took this shot at 7:19 in the morning on the ramp at Folks Field before my actual departure time around 7:30 AM.   By the end of the day, five flight segments would cover 1,390 miles.  The GPS flight plan is for 600 miles each way.  Read further to learn where those extra miles took me on this day!  May 28, 2015 UPDATE:  The GPS log files for the FIVE flight segments are now posted on the Google Earth Tour MENU page.  Read this page and the following TWO pages to know what you can see in the Google Earth tour for this day's travel, May 12, 2007.  You will get a chance to see what it can be like to land from the SOUTH end of the runway at Folks Field near Chickamauga, Georgia.  That landing is at the end of log file 05. 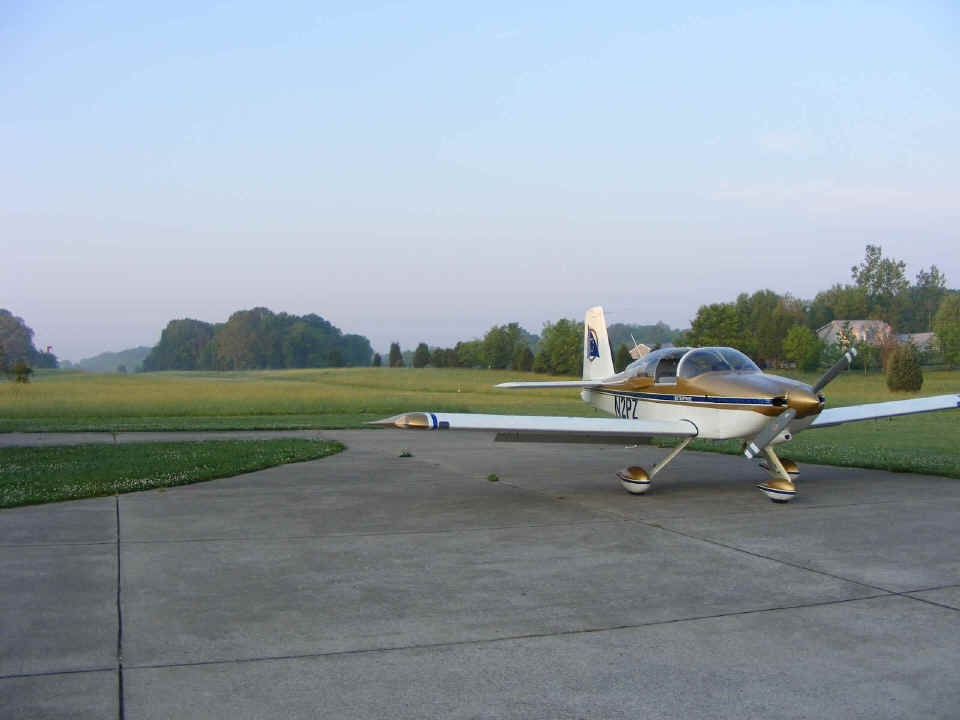 The ride across north Georgia in the morning sun (8:04 AM) reveals the mists rising from the terrain north of Jasper, Georgia.  The clouds on the horizon hint of things to come later in the day.  And of course, there is a bug strike on the windshield.  The polarizing filter on the digital camera is helping to reduce the reflections off the inside of the windshield. 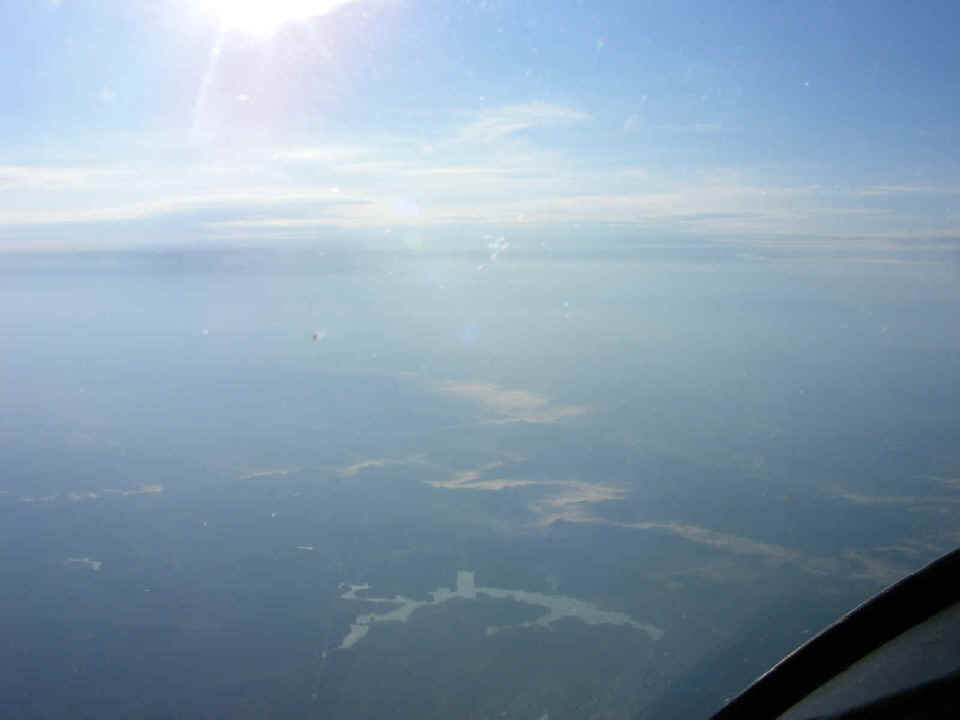 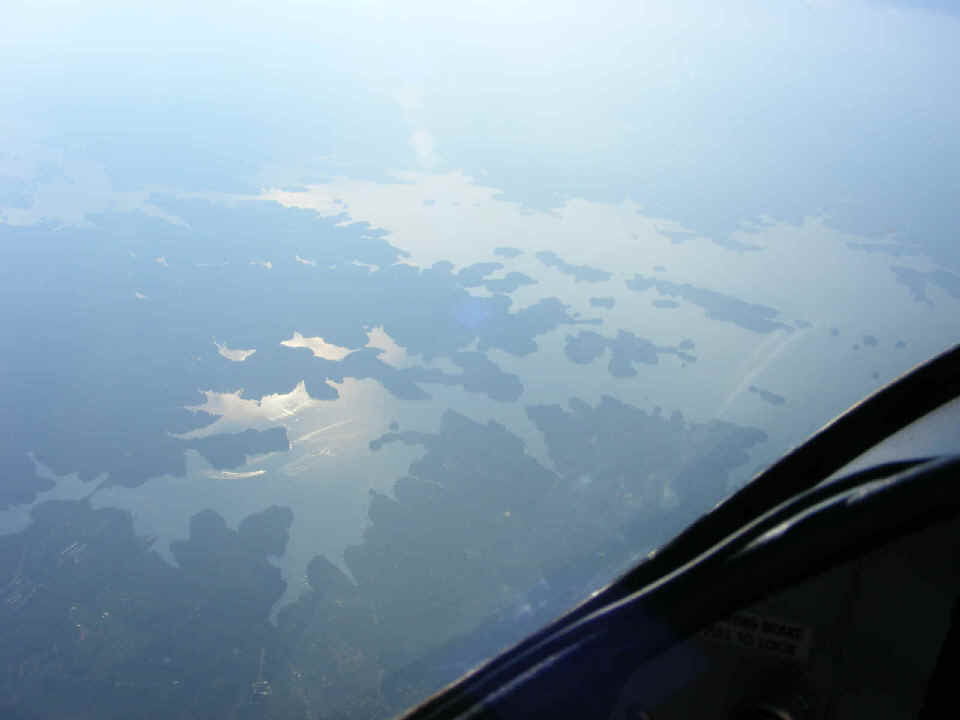 I took this photo at 8:18 AM after passing WOMAC intersection northeast of the Atlanta class B airspace.  Gwinnett County airport (KLZU) was on the other side of the airplane, but this line of clouds had my interest.  I had to descend to 7, 500 feet MSL to remain in VFR conditions as I changed my heading for my next waypoint, the Dublin, Georgia airport. 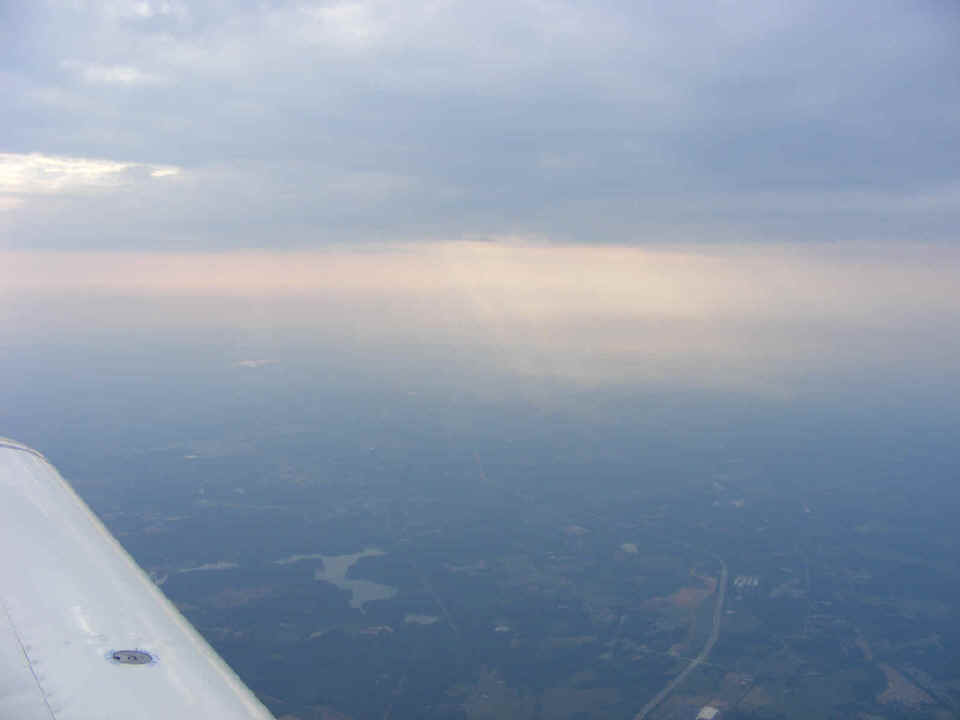 I took this photo looking toward the south after passing Dublin and calling JAX center for flight following advisories.  Things were looking good for a great flight to Florida today.  But all that was about to start changing, no matter what the weather forecast said. 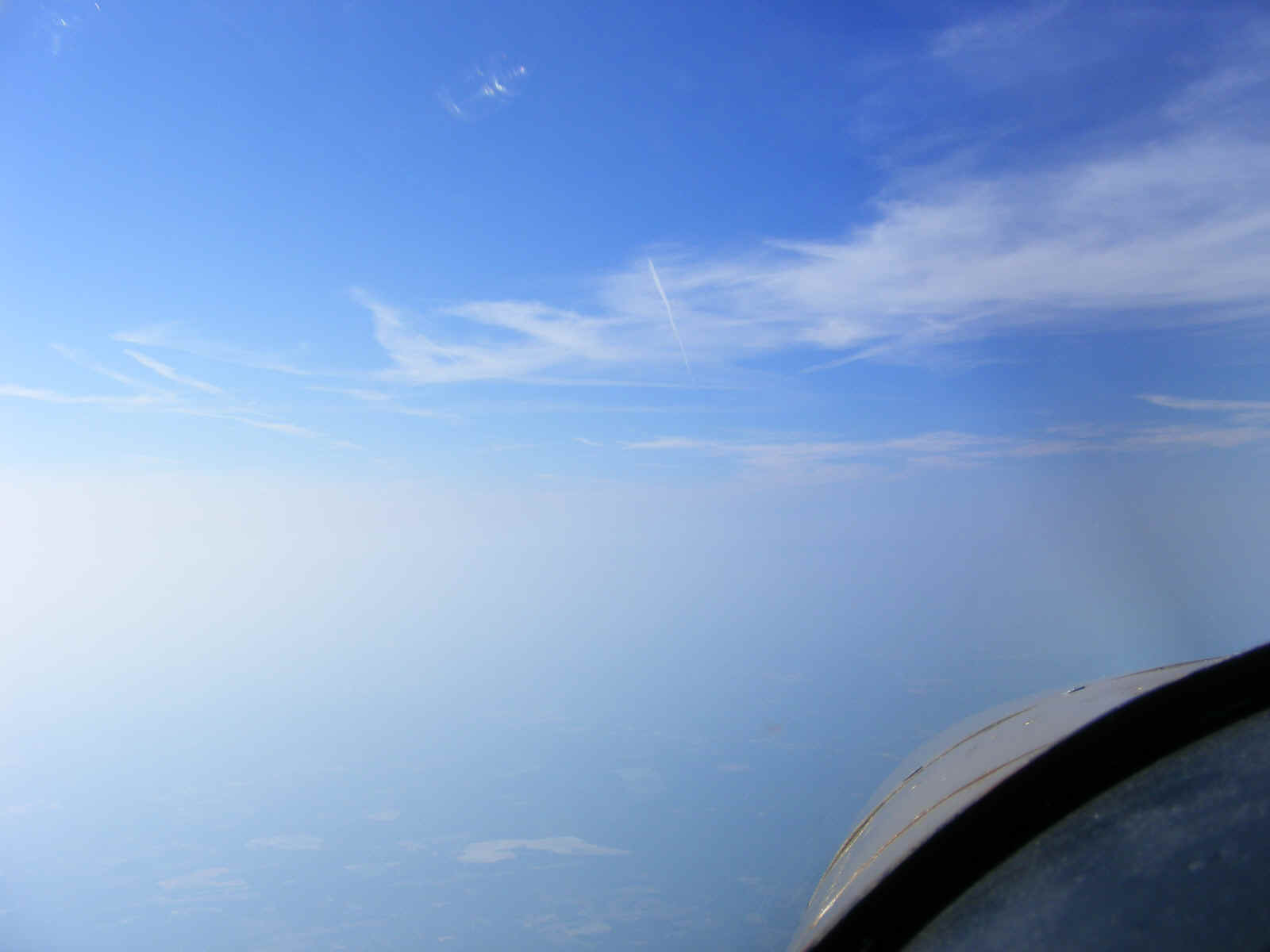 Here is a map of my GPS ground track south of Dublin, Georgia.  That straight line track on the left is my southbound flight path.  I had no sooner been handed off to Valdosta approach from JAX center, when the Valdosta controller said I could check the weather at Homerville where I intended to land for the lowest AVGAS fuel price in Georgia.  The smoke from the big forest fire in Ware County, Georgia was blowing across that area and reduced the ceiling to 100 feet AGL.  I diverted to Alma, Georgia (KAMG) which was visible from my position north of Douglas, Georgia.  The fuel price was only seven cents per gallon higher, but I had hoped to land at a new airport (for me) to add to my flight options. 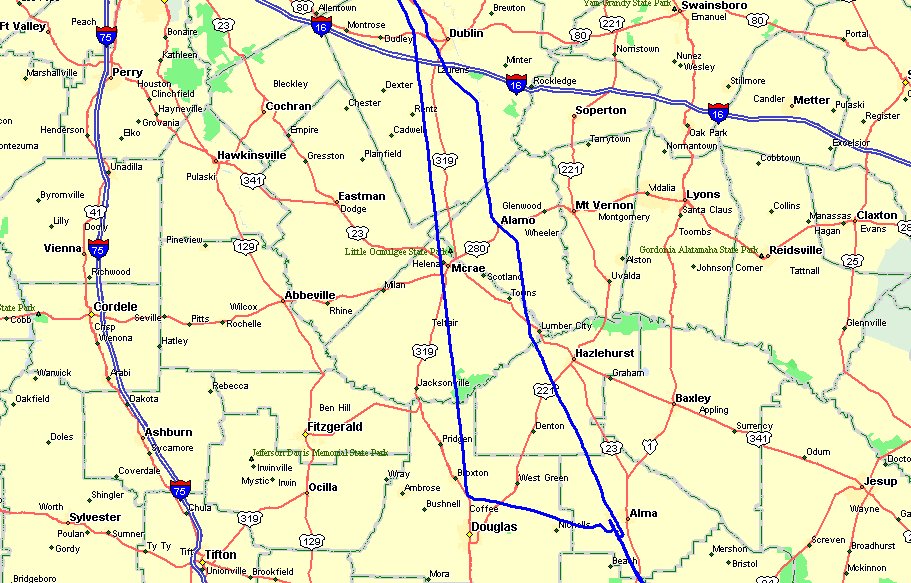