August 2, 2008:  The weather Saturday was stormy in the afternoon.  Travel by car was the requirement for the day.  I had lunch with my youngest son Marshall, two days before his birthday on Monday.  Here are a pair of photos taken after the "birthday lunch" when I had a chance to meet his close friend Jasmin. 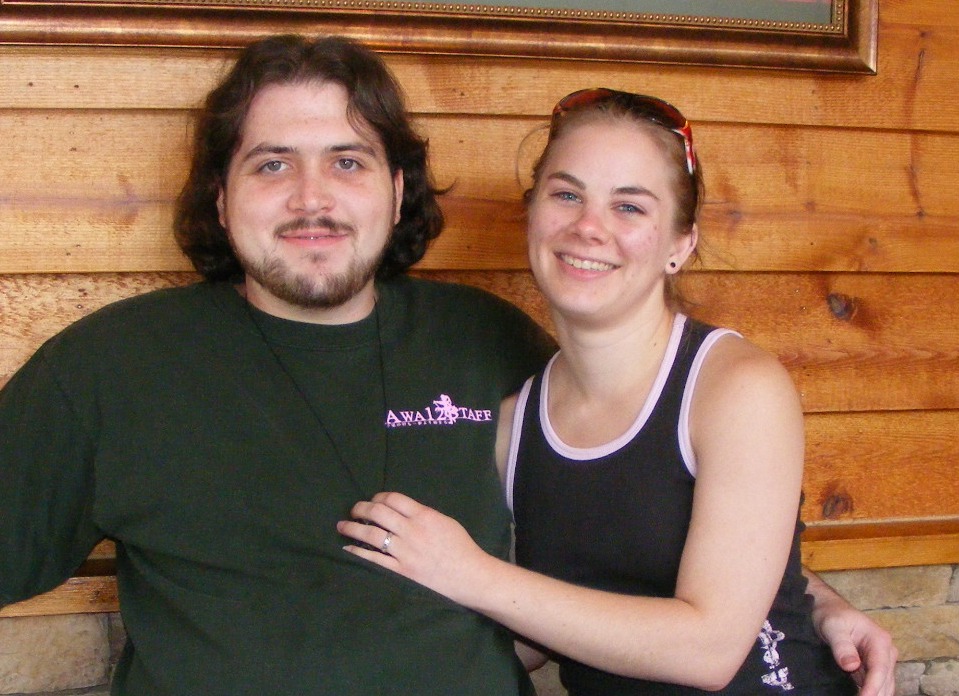 Of course, Jasmin took three photos of Marshall and me.  I chose this one since it is the best one of Marshall.  As for me, there is no best... 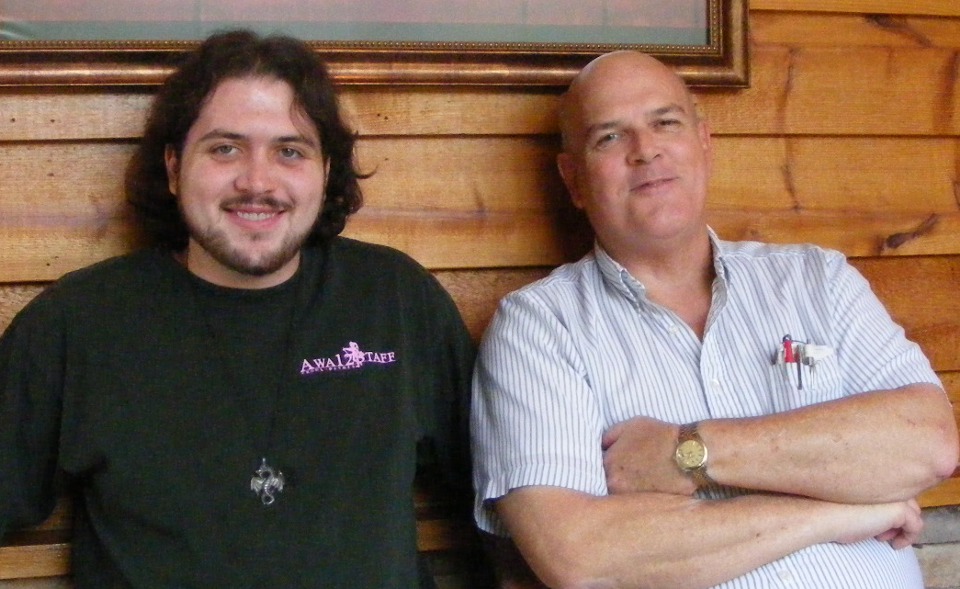 Later on Saturday, I spoke with my builder friend Marty and asked if he wanted more flight time since the Sunday weather forecast was clear of any rain, but would be hot and hazy.  He accepted and I planned an early Sunday morning flight to Lawrenceville again.

August 3, 2008:  I got airborne around 7:45 AM with a scheduled meeting at 8:30 on the ramp at KLZU.  I pulled in right on time and Marty was there ready to load up and head East again to an airport about 54 miles away in Franklin County, Georgia (18A) where the fuel cost was lower than around Atlanta.  We could do a number of takeoffs and landings at the uncontrolled field without any delays.  I took this photo when we took a break to cool off in the airport lobby.  The GPS ground track followed eight times around the pattern here, and a pair of "cooling off" sightseeing side trips in the local area to keep the engine at low power with plenty of air flowing through the cowl.  The Hobbs meter showed about one hour during this time near the Franklin County Airport. 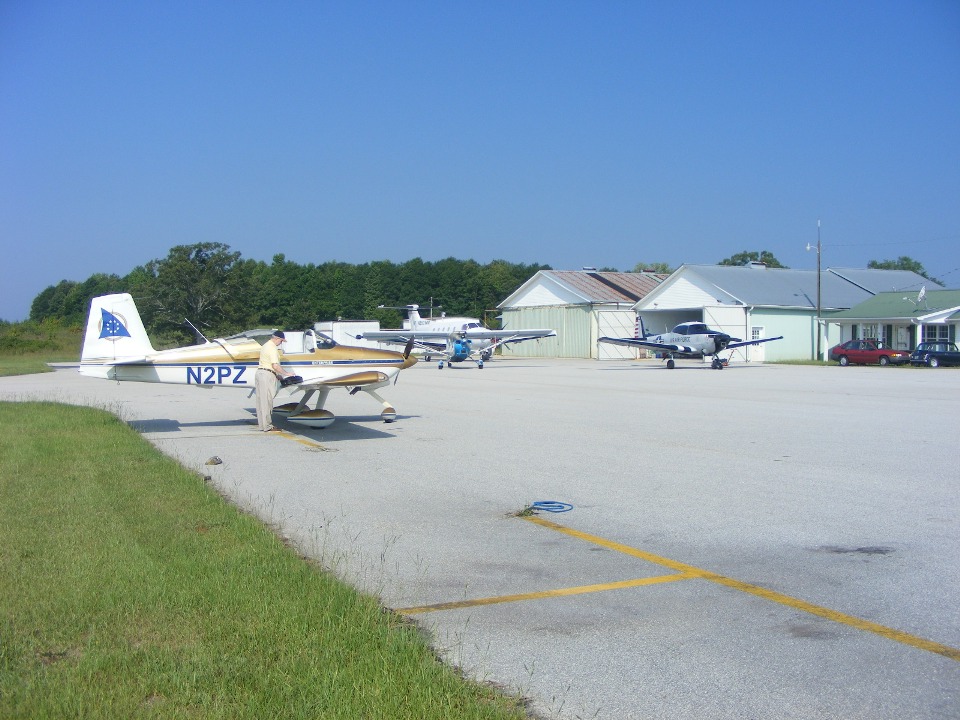 After topping of the fuel tanks at Franklin Country Airport, we headed back to Lawrenceville for lunch at "The Flying Machine" restaurant.  It is located on the south ramp of the airport as you can see.  The chicken Caesar salad was freshly-prepared and really good.  You also need to check out the "Platinum Blonde" that hangs out here.  The ladies may not see her, but the guys definitely will get the chance.  She is the silent type, so don't expect an answer to any inquiries. 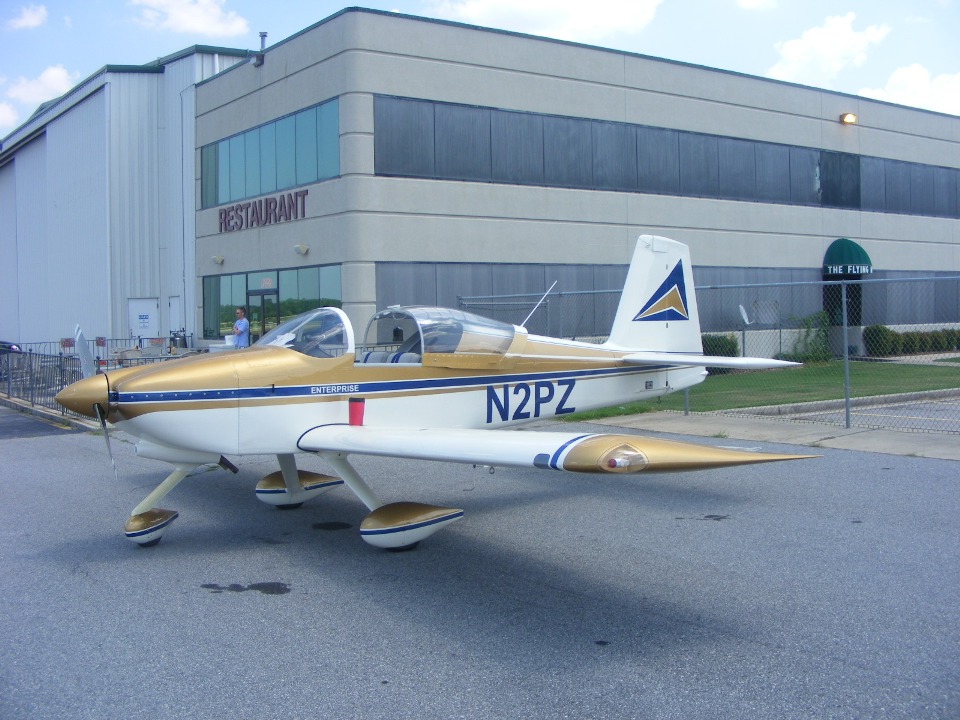 After lunch with Marty, I stopped by McCollum Field (KRYY) at Kennesaw, Georgia to meet with Marshall and Jasmin for their first look at my airplane.  The short flight over there was really HOT and bumpy with plenty of traffic in the pattern and arriving as I approached runway 27.  It was very HOT on the north ramp when I landed here.   The air temperature was in the high 90's.

Jasmin grew up in a part of Texas where it gets really hot and she was ready to take a ride no matter what.  It was only the second time the Dynon announced it was OVER TEMP and did not display in color.  I need to carry a white towel to put on the inside of the windshield to keep the instrument panel cooler on hot summer days.

By the time we got to the hold short line for runway 27, she realized just how hot it can be inside the airplane.  We had to open the canopy for some of the propwash air for the taxi down there, and while waiting for takeoff clearance from the control tower.  The oil temperature hit 223 degrees on the climbout to the west before I could level off and get some airspeed to cool things down again.  The flight lasted just over half an hour as we flew to the northwest where she took some pictures near Cartersville, Georgia.  The verbal dialog during the flight was all about aviation flight rules, airport traffic patterns, and the physics of controlled flight, etc. 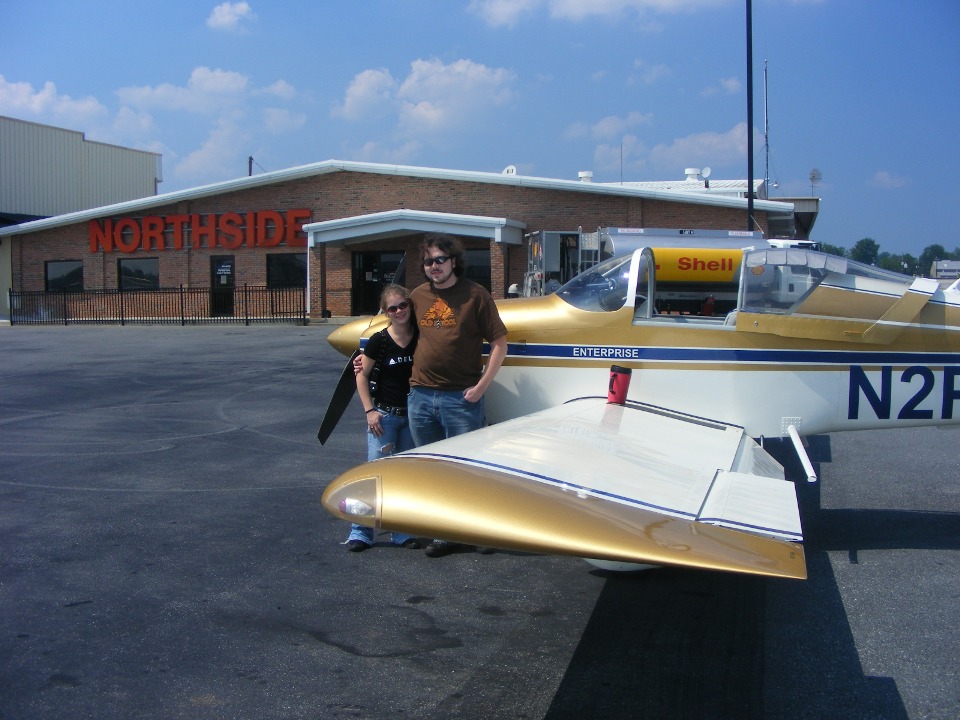 We went back inside to cool off and it was decided the flight for Marshall would be postponed for a cooler day, which may not be that far away.  I have already been looking at the forecast for next weekend, and it could be clear and a bit cooler.   That red sign in the background is on top of the airport control tower, located behind the hangar seen in the distance. 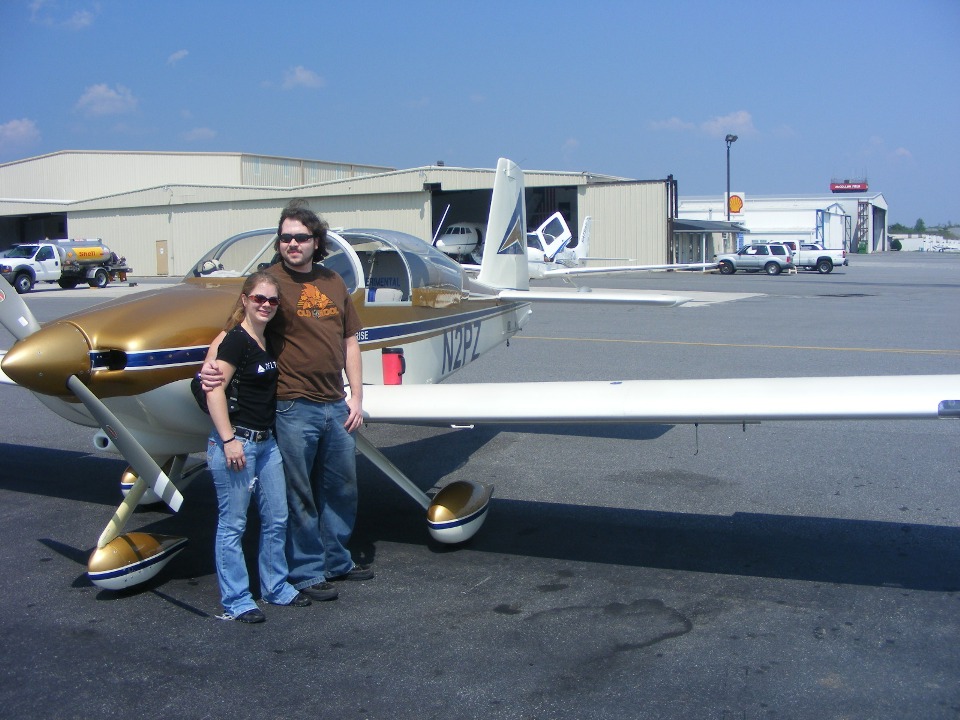 Of course, I did not have any choice, I had to make one last flight in the heat and turbulence today to get home.  I called Wendell's house at 4:10 PM just before engine start for the departure.  Wendell was ready to move the airplanes around in the hangar when I landed.  The Aeronca Champ is now in the NE corner, my RV-9A is in the SE corner, and his RV-8 is up front by the hangar door.  I was cleaning the bugs off the airplane as Wendell told me about his Oshkosh experience.  He and Terry returned home around lunch time on Saturday.  Wendell got some extra sleep time Saturday night/Sunday morning.  He had just gotten out of bed when he came out Sunday morning for my early departure that began the day described above.

I also have some photos emailed to me from the Oshkosh family that rented out their basement to Wendell and Terry while they were at Airventure this year.  There was no camping out for them on this trip.  Those photos are published on Wendell's PAGE 87.  I have not yet received any photos taken by Wendell or Terry while they were at AirVenture 2008.