January 6, 2008:  This first Sunday in 2008 begins with a short synopsis of the final days of 2007.  I had a chance to visit some old friends in Florida over the Christmas and New Year's Holidays.  The trip south was on Christmas Day when the highway traffic was relatively light.  (I left my airplane at home due to the weather that was forecast, and the cost of tie-downs where I needed to go.)  I also discovered that only the restaurants and fast food at truck stops, Waffle House, and Huddle House were open on Christmas day.  Since my office for my day job travels with me in my computer bag, I was available for any customer calls that should come in during the post Christmas "work days", but only ONE customer call came in, and only ONE thank you email came in during the three work days of December 26-28.  Likewise, not a single call or email happened on Monday, December 31.   The next day was the return trip to the Chattanooga area on New Year's Day.   More places were open this time, and I stayed off the interstate highways as much as possible to avoid any return holiday traffic.  I saw a lot of US and state highways in Georgia.  The north wind was picking up prior to a really cold snap of weather that gripped the Eastern states after my return.  I checked the aviation weather before I started the trip north, even though I was on the ground in my old Caddy.   With the winds aloft that day, I was glad I was on the ground.  It was pretty gusty at the surface as the afternoon travels brought me closer to home.

As for Wendell's RV-8 project, I paid my usual Saturday afternoon visit to the hangar to check the current status of his airplane on January 5.  The details of that visit and the photos are on his PAGE 76.  I was picking up some groceries on the way back to my place and decided to call my old friend David Edgemon after seeing a web note that he has started an RV-8 tail kit.  The link from his name leads to some pages where he was painting his RV-9A at home in July 2004.  He later took in two part-owners in the airplane and is now starting on a new project.  He has not yet firmly made up his mind whether to build a tail-dragger RV-8 or nose-wheel version RV-8A.  It sure sounds like he is going for the tail-dragger RV-8.  It was during this call that I offered him a chance to come see Wendell's project.  David has been here before back on September 18, 2005.

January 11, 2008:  I stopped by the hangar on Friday evening to see the paint shop conversion and preparations for the painting of Wendell's RV-8 and to be sure that the "Enterprise" is protected from the coming event.  This photo shows the way my airplane was wrapped when I first arrived.  Wendell and I would add more coverage as needed before my departure. 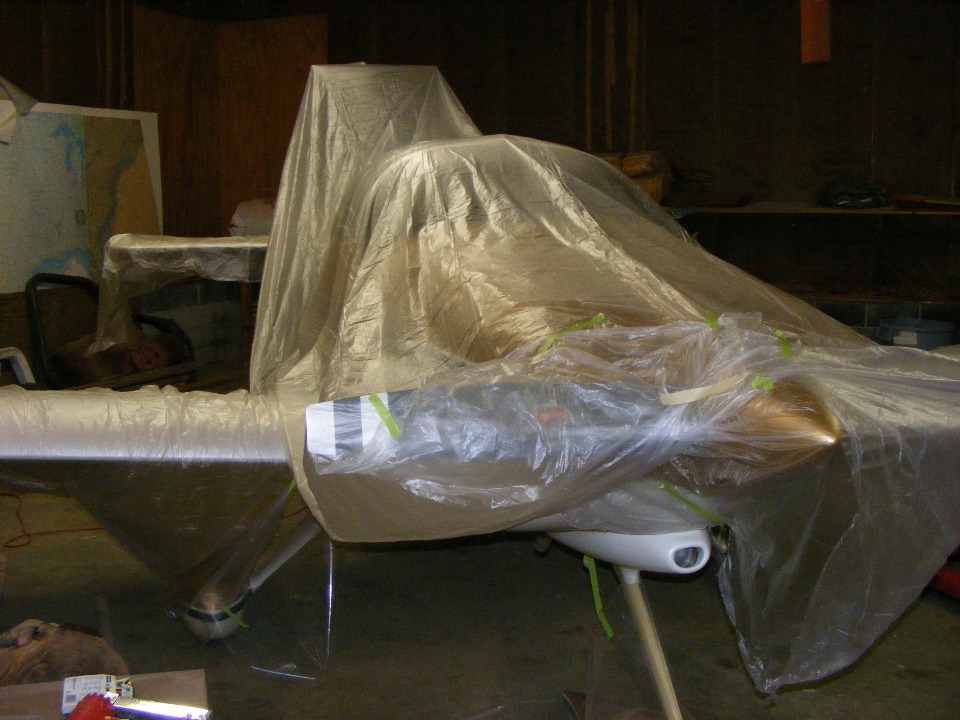 Here is the view of the tail and the back wall of the hangar that is outside the temporary paint booth on the other side of the hangar.  The extra plastic that is hanging off this end of the horizontal stabilizer was later opened to its full length and used to cover the exposed area of the fuselage and the underside of the stabilizer. 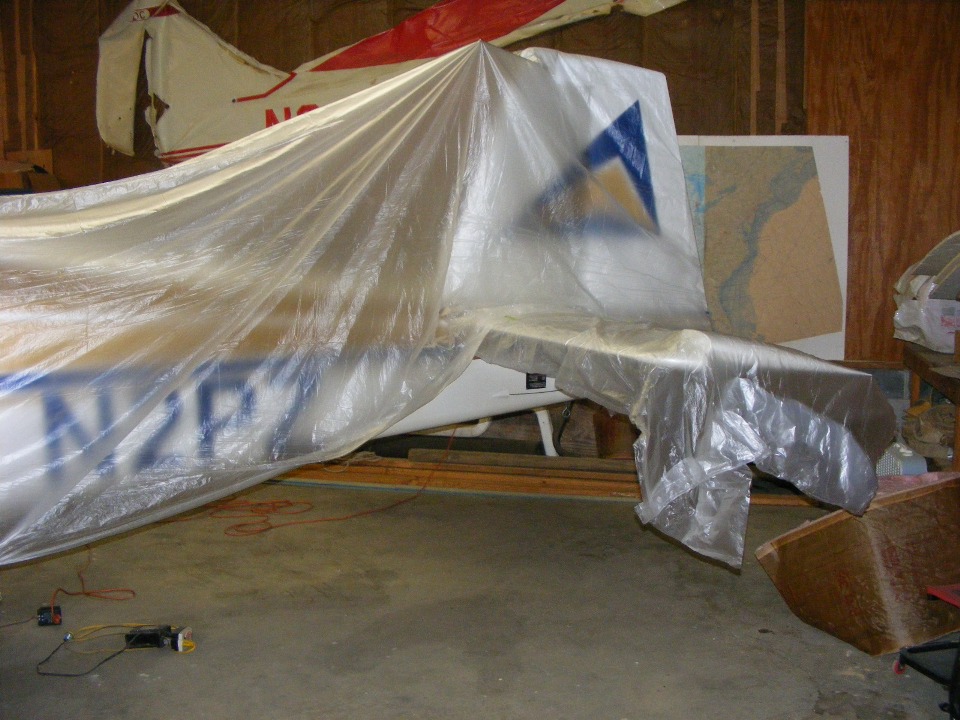 Wendell did a good job of protecting the wings and the fuselage.  This wing was the first one he wrapped with the plastic sheeting.  The width of the plastic was more than adequate to wrap completely around the wing and fully enclose it.   We added one additional sheet of plastic on this side of the fuselage from the wing going aft and wrapped it around underneath to cover the fuselage as seen exposed in the photo above. 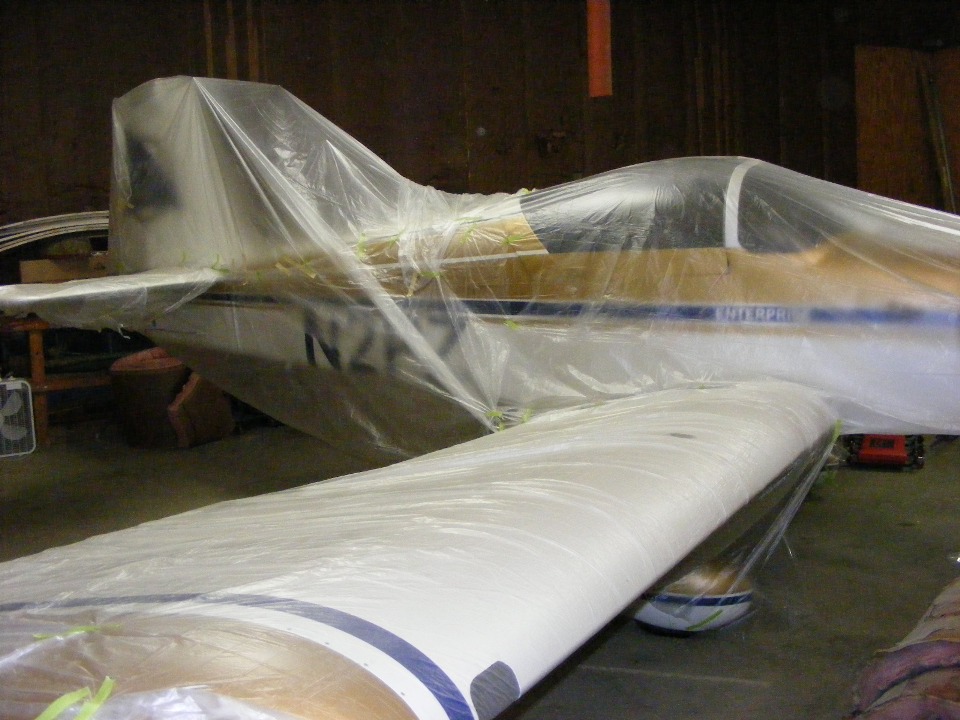 Go to Wendell's NEW PAGE 77 to see the status his painted parts and the "paint booth" with his RV-8 inside it.  Wendell and I were talking about the next steps to come in the project.  I remembered to tell him that David Edgemon wants to visit to see the RV-8 status.  Wendell was telling me that John Myers visited twice this week since he has an RV-8 under construction.

January 12, 2008:  I went by the hangar again today to see how the painting was going on Wendell's RV-8.  My timing could not have been better.  I arrived in the early afternoon between the priming and the real "yellow" painting.  When the air had cleared enough inside the hangar, I was allowed in to get some photos.  This is a view from the south end of the hangar door looking at the plastic paint booth.  The front of my RV-9A is under the plastic seen behind the red tool box at the bottom right side of this photo.  I was pleased to see no paint "dust" on the plastic covering my airplane. 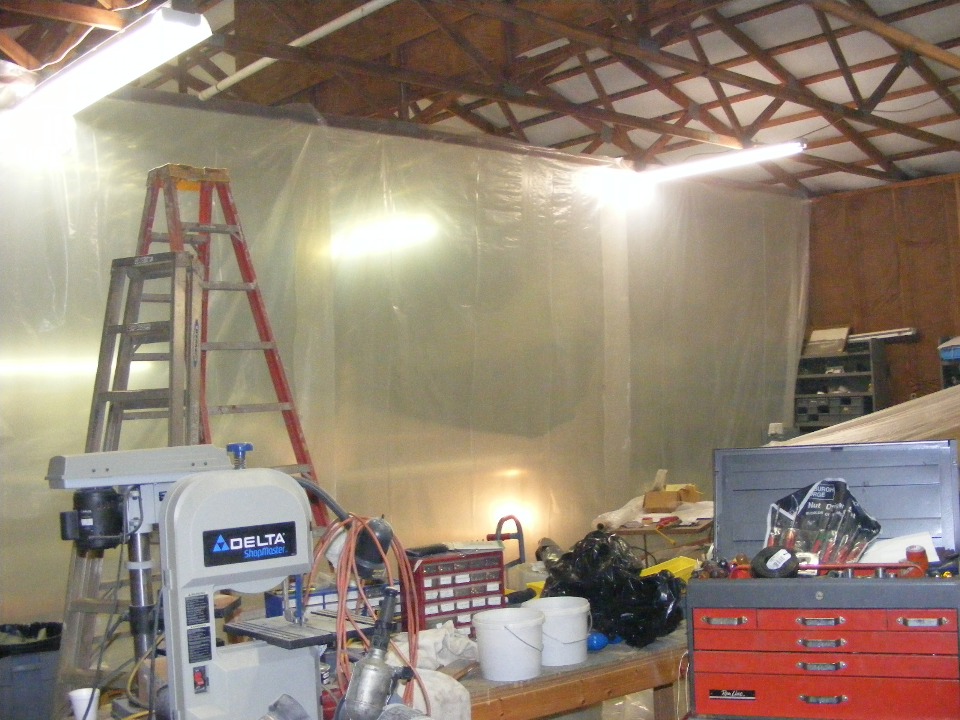 This angle shows how the "booth" was placed near the hangar door to allow ventilation with one of Wendell's blower fan units. 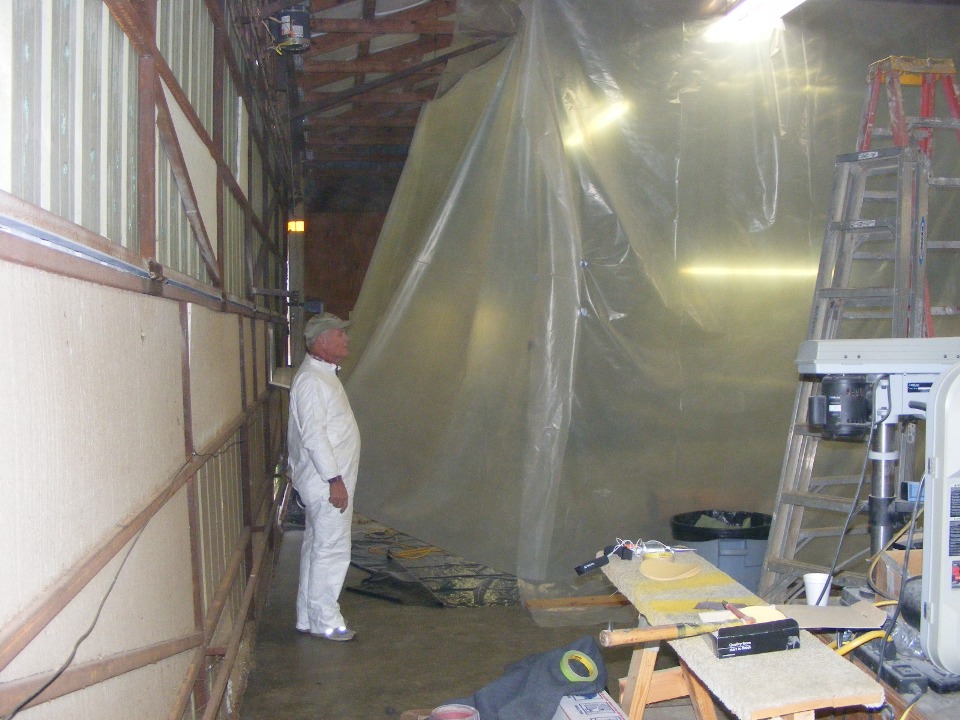 Here is that fan unit exhauting the air to the outside. 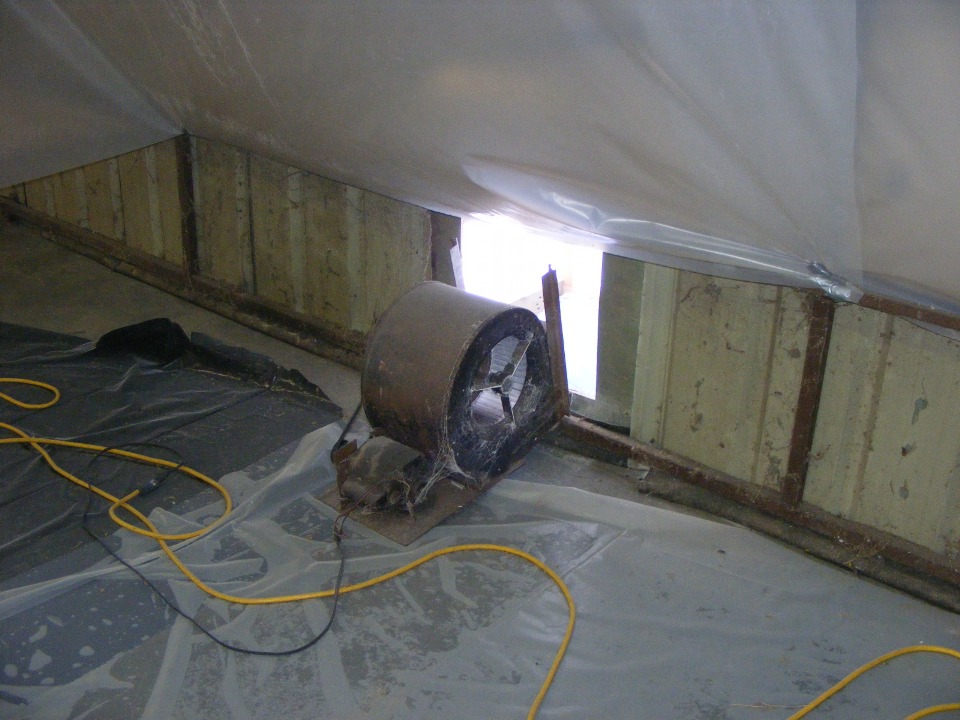 This photo shows how one corrugated metal panel was removed to make way for the vent system.  A piece of plywood and some 2x4's holds the filter elements in place on the outside of the door.  The big cardboard box lid from the empennage kit served to seal the empty space above the wood. 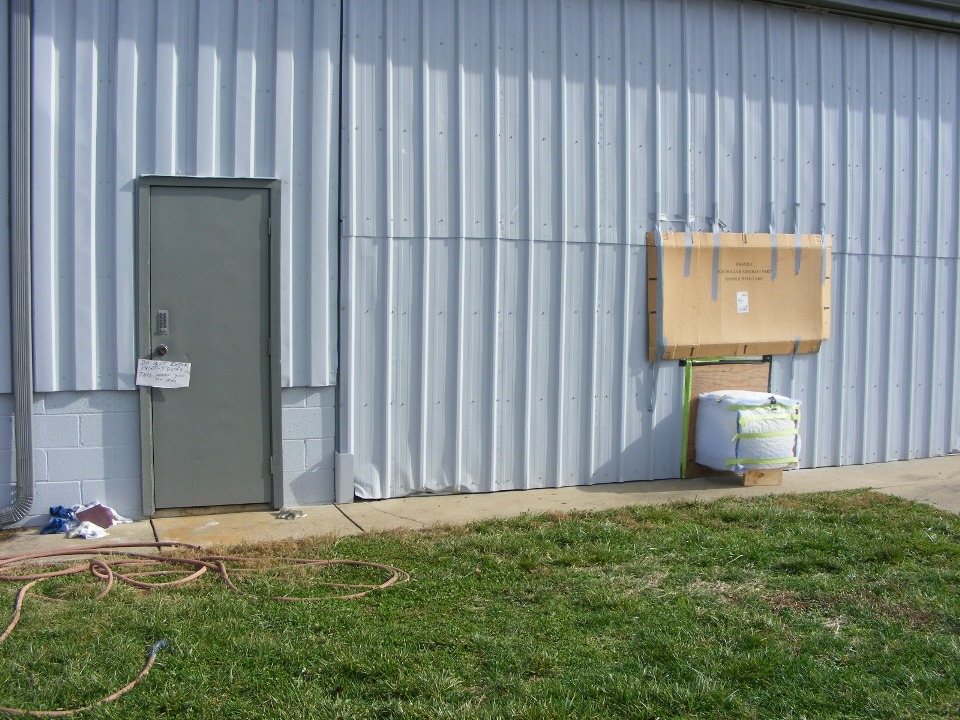 The note on the door says it all for those who might not know what is going on inside the hangar today. 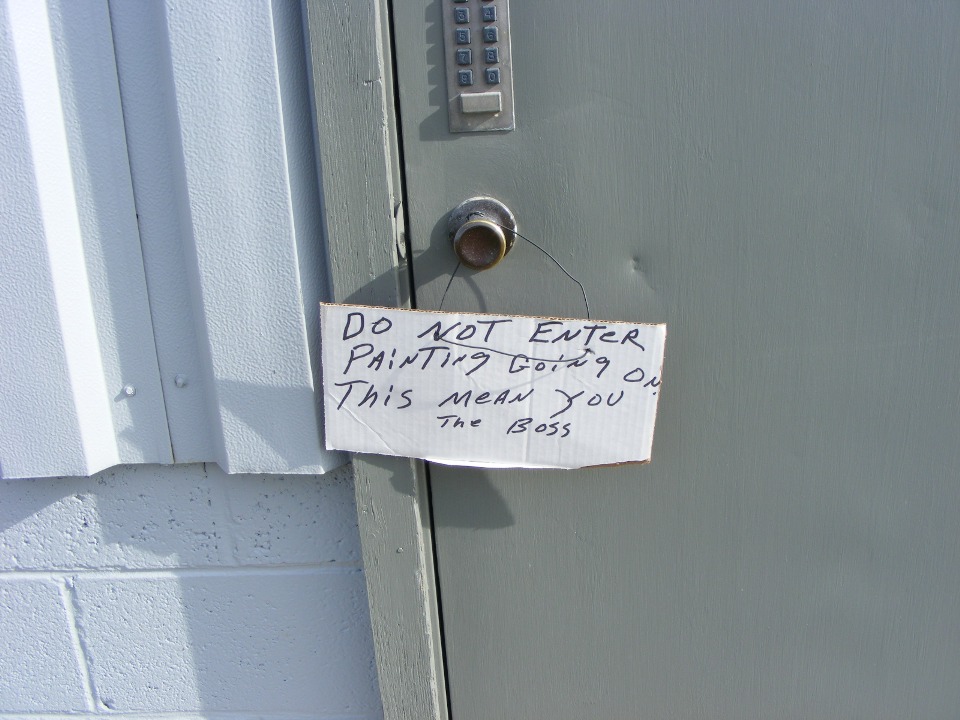