December 11, 2006:  This past Saturday saw my return to the hangar from a week on the road for my day job.  I previously discovered a burned-out bulb in the landing light in the right wing.  I had seen what appeared to be the same type bulb at Wal-Mart the other night.  I took off my right wing tip and removed to bulb to be sure it was the same type.  With the old bulb in my pocket, I compared it to the ones on the shelf at Wally World and brought home FOUR of them.   I installed one now and have one for the day soon that the bulb on the LEFT side will fail.  That leaves two for "next year" if needed by then.  I bought the extras since that type of bulb is used in fog lights and other types of off-road lights typically used up on the roll bar of "Good Ol' Boys" pick-em-up trucks.  The bulbs were less than $5 each and were identical to the one from the Duckworks light kits.

This evening I had spent time with Wendell to get him past another milestone in his electrical wiring to the main switch/breaker panel.   I also went over to the hangar to try out an electrical plug for my AC power inverter.  The extension cord I had used up until now would come unplugged from the inverter cutting short any videos I would make.  That happened on the Oshkosh 2006 trip, twice.  The new plug appears to have the problem solved, but that will be confirmed the next time I go flying.

While I was in the airplane, I checked the log book and realized that I am due for an oil change.  Guess what I will doing this coming weekend.  The weather forecast looks good, even for working inside the hangar.  The recent cold snap has faded away with temps in the 60's expected.

December 16, 2006:  It seems that I had changed the oil at 200.9 hours way back on July 29th after returning from Oshkosh.  It was not in my aircraft log book, but it was written on the side of the oil filter on the engine.  Unfortunately, I did not see that information until I had drained all the oil from the engine.  Oh, well.  I also worked with Wendell to get him further along on his RV-8 project. 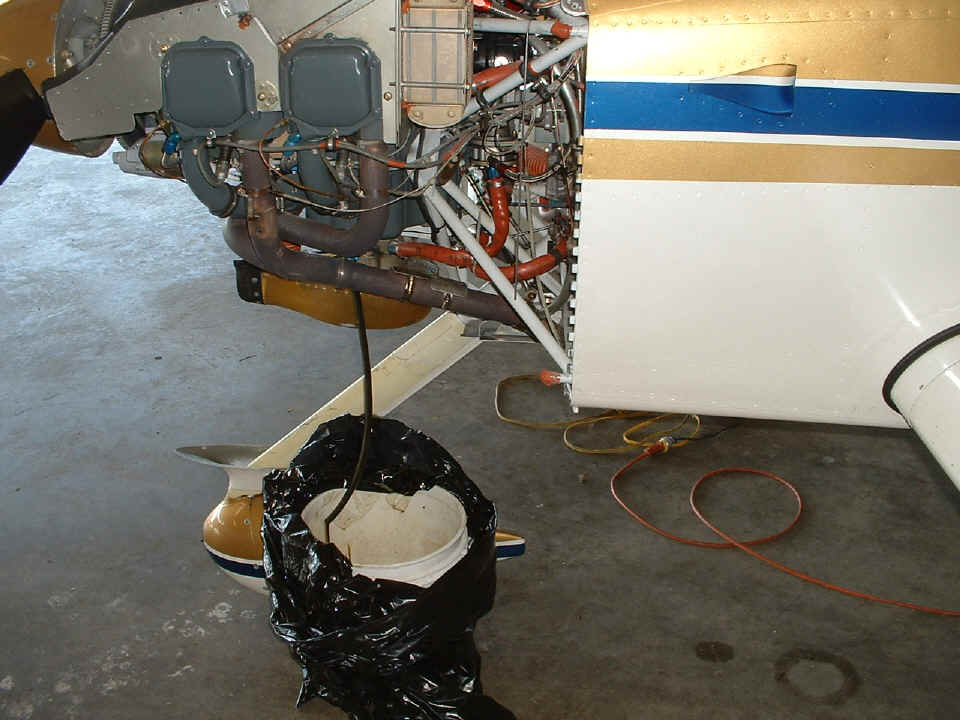 At the end of the afternoon, just before sundown, I had put in FIVE new quarts of oil and got the airplane ready to button up tomorrow.  I will get the airplane ready to fly, then load up my video camera to conduct a test with a polarizing filter in front of the remote video camera.  The loss of two "F-stops" should cause the shutter speed to be "slower" so as to avoid seeing the propeller in sharp focus in the video frames.  With any luck, it should come out blurred to the point that it may become "invisible" to the camera.  Wish me luck.  We will find out tomorrow.  If it works out, I will have to search for a filter the correct size to fit the camera instead of just taping on a filter from my SLR film camera.

December 17, 2006:  I am posting the new content to this page a few days after the actual flying I did on Sunday, December 17th.   I wanted to try out my video camera with a polarizing filter to reduce glare from the foward top skin, cowl, and reflections from the inside of the windshield.  I had hoped that the reduction in light level would affect the electronic shutter speed of the remote video camera, but it did not make a real difference in the appearance of the propeller blade in the video frames.  Here are some snapshot frames from the video I made during the 0.6 hours added to the Hobbs meter on Sunday afternoon.  This is the first shot during engine run-up.  The edges of the prop are a bit fuzzy, but no disappearing act here.  The electronic shutter speed is lower than without the polarizing filter, but not slow enough, yet. 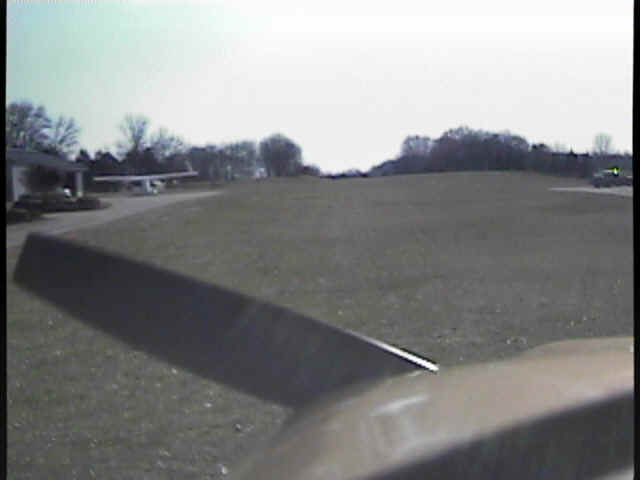 After takeoff toward the south, I turned around for a high-speed pass over the field heading north (downwind).  I am rolling out just before wings level as I approach the touchdown zone we use from the southern approach. 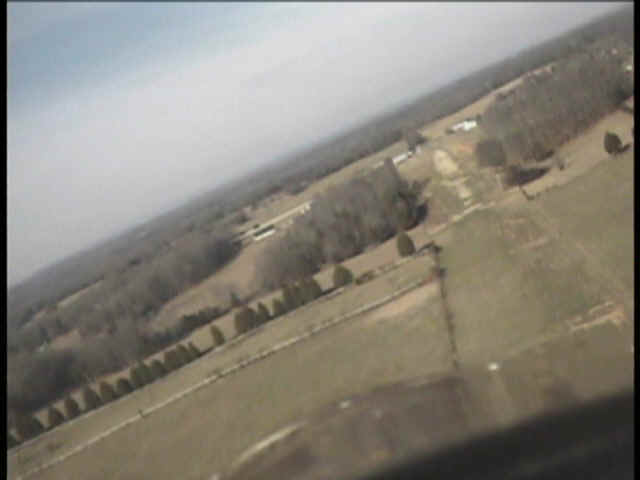 Here is a closer shot with wings level.  Landings from the south are between the grove of trees.  That is not bare dirt you see, just the grass in its winter brown color on the runway. 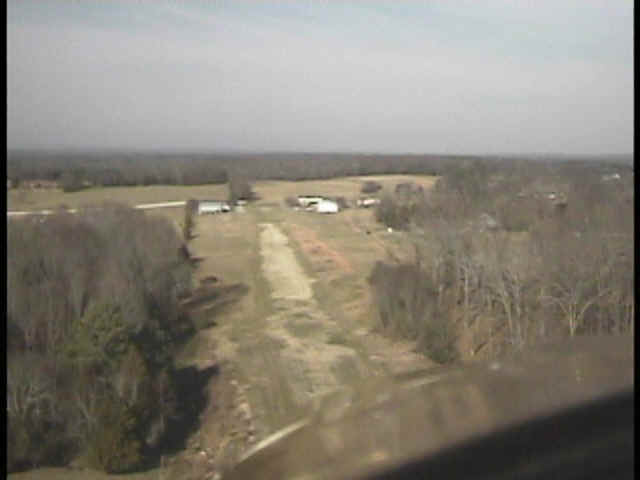 Here is a closer shot of the hangar and residence area.  There is a driveway on each side of the runway. 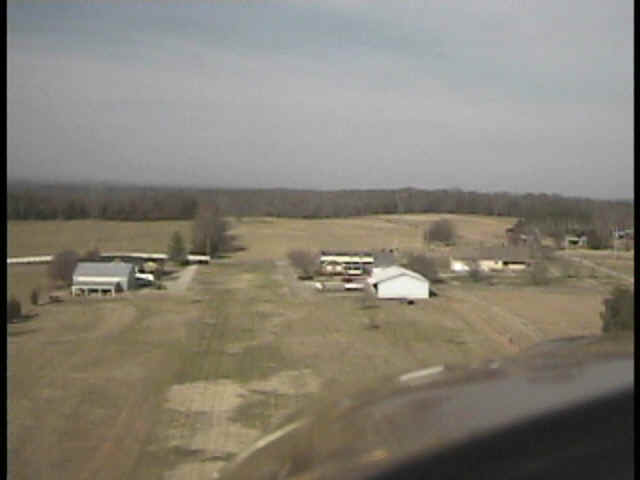 The other part of the test flight today was to test the autopilot.  It seemed to have some problems the last time I flew the airplane.  I climbed to 5,500 feet MSL to get into smooth air.  After engaging the autopilot on a course to Dalton Airport (KDNN), the NavAid auto pilot tracked the course just like it has done on many of my cross-country flights.  That clear area in the bottom left corner of the photo is the Dalton, Georgia airport. 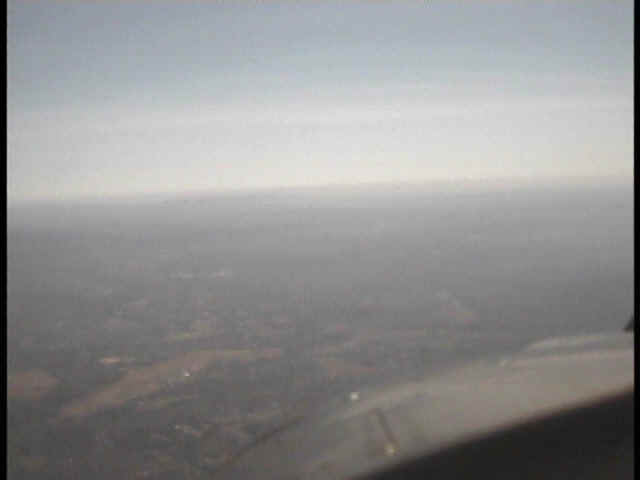 Here is a view of my favorite mountains I would see every day of my youth.   This range of Appalachian foothills are about 14 miles EAST of Dalton, Georgia -- just East of Chatsworth, GA.  The closer mountains are named Grassy Mountain and Fort Mountain.  There is an old Civil War era stone fort up at the top of the latter -- hence the name "Fort Mountain". 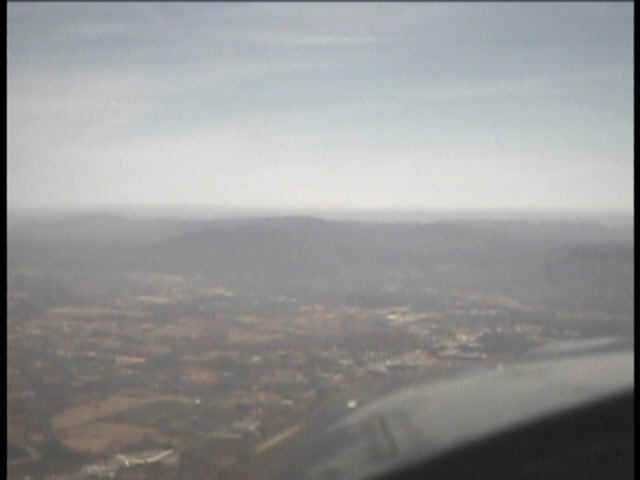