September 18, 2005:  After spending much of the day flying with David Edgemon, it was time to head for home.  I took this shot while cruising at 5,500 MSL over northeastern Alabama.  I was just above the warm air below and a scattered layer of clouds. 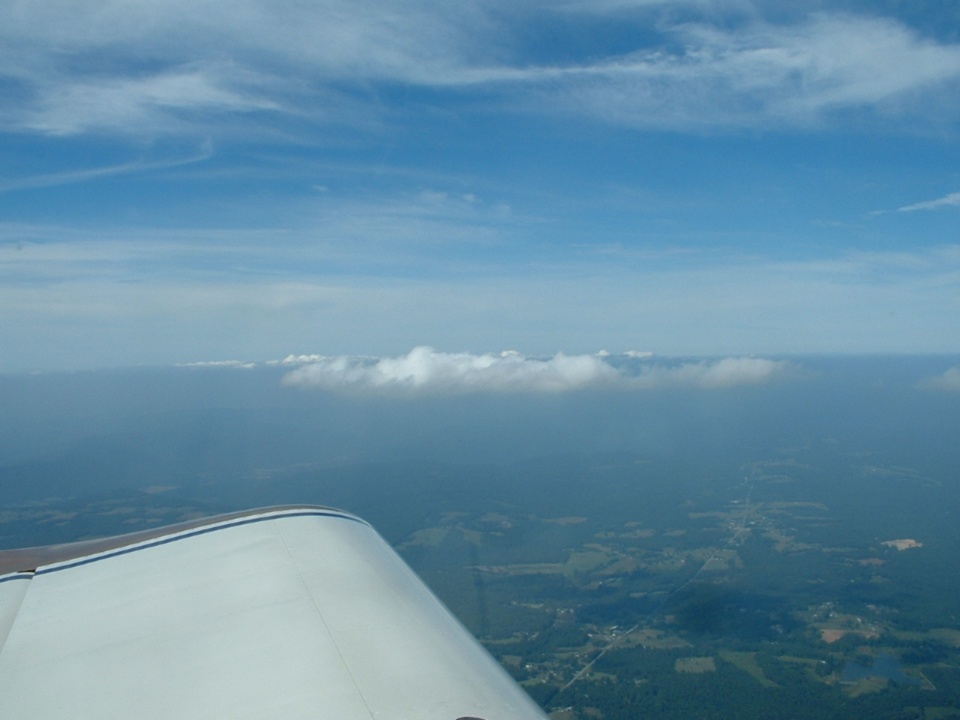 As I passed over the Tennessee River, I snapped this picture and then processed it in Corel Photo Paint to see what could be done to reduce the hazy conditions using Histogram Equalization.  This bridge across the Tennessee River is at Stevenson, Alabama. 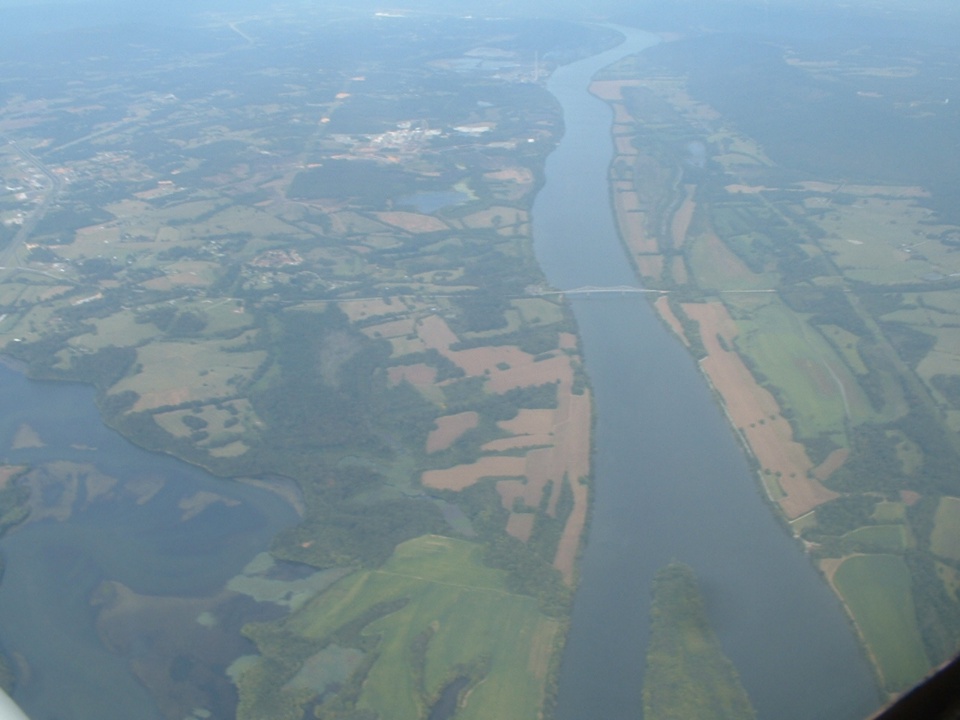 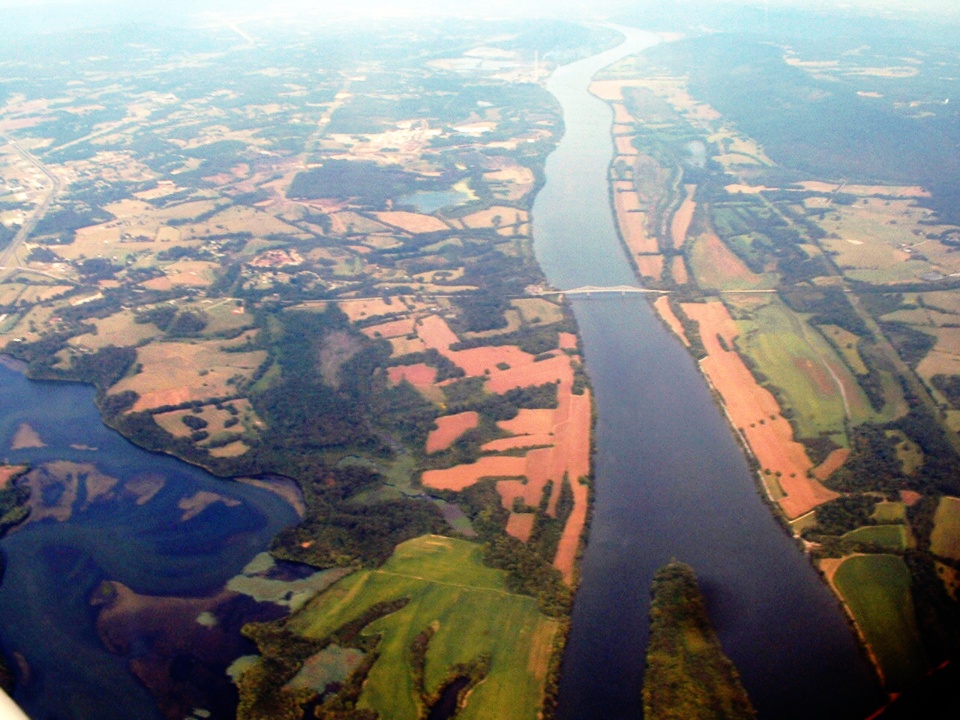 At the end of the day, the Hobb's meter read 99.0 hours.  It is time for an oil change again.  I will be giving Wendell more guidance on his empennage work tomorrow, and doing my oil change as well.

September 20, 2005:  I took Enterprise outside on the ramp to warm up the engine before I changed the oil.   While it was out there, I took these digital pictures and some 35 mm film photos as well.  I have cropped out some of the background details and did the compression in Corel Photo Paint to avoid the heavy crunching done by Front Page during posting. 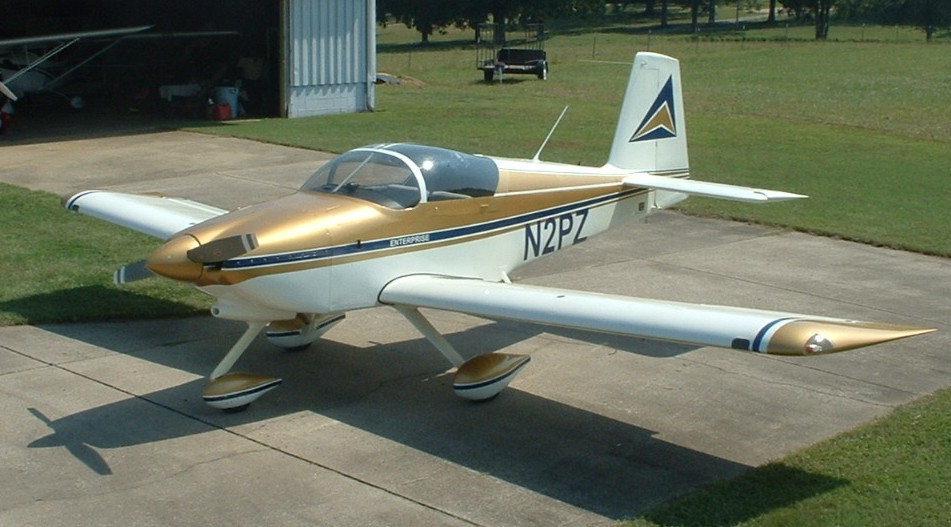 And of course, here is the other side view since they are different.   Inside that "garage" door beyond my old 1996 Caddy is the shop where Wendell is working on the elevators of his RV-8 project. 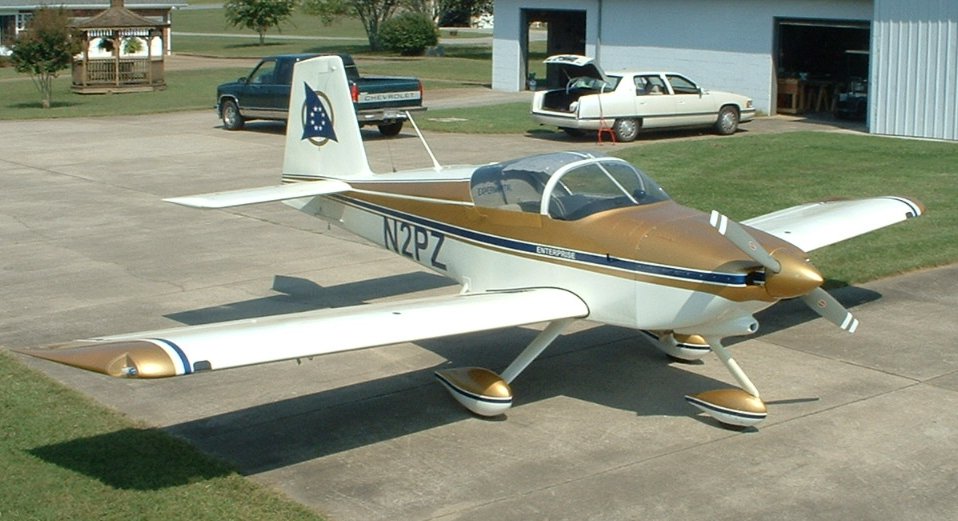 After the engine was warmed up, I put the airplane back in the hangar, pulled off the cowling, and changed the oil.  This is the first time I got to use the quick drain valve which was put on at the end of the previous oil change back at 72 hours Hobbs time.   After warming the engine, the Hobbs now stands at 99.1 hours total time.  This photo was taken as the last of the old oil trickles through a plastic tube into my five-gallon bucket. 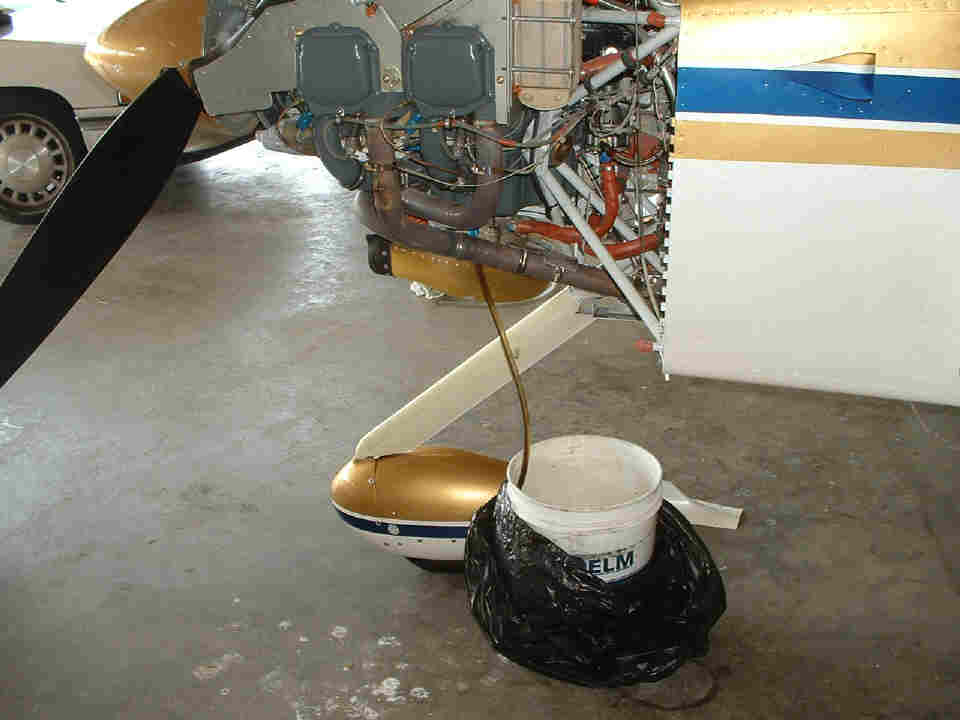 I checked all the valve cover screws and managed to tighten each one "just a little bit" to try and keep things secured against any oil leaks.  I also found one fuel fitting that needed to be snugged up on the input to the fuel flow sensor.   The new oil filter is installed and safety wired.  As 6 PM approached, the cowl was secured and Enterprise is ready to fly again.

September 30, 2005:  I sent my GPS 296 to Garmin for a warranty repair.  It was having intermittent power problems trying to operate it from the internal battery.  It works fine from the external power cable, but sometimes it won't start from the battery.  It appeared to be an electromechanical problem with the three electrical tabs to the battery pack, not anything to do with the CPU or internal display, etc. (posted October 9th)

October 1, 2005:  Now that the new month is here, we can get "back to normal" with updates on flying Enterprise and my other aviation related news.  I bought an extra gigabyte of download capacity to get the site through the end of September, but that was not enough and the site shut down during the night of September 28-29.

An old friend from the cable television industry called me yesterday to ask about me and the web site.  I reassured him that I am fine and the site would be back in service today.  He then asked me to help him start a web site about his airplane construction project.  I will fly Enterprise down to the Lawrenceville, Georgia airport (KLZU) to meet him today to start him on a web site to go with his Europa construction project.

4:30 PM:  The weather this morning was lousy.   Low overcast and limited visibility prevented my flying trip to Lawrenceville.   I spent some time with Wendell and his friends at the hangar and the "RV-8 aircraft factory" in the warehouse next door.  I cut out a second jig from particle board for the riveting of the skins on the horizontal and vertical stabilizers.   I watched Wendell put in a few rivets in the aft spar of the vertical stabilizer and he seemed to get the hang of using the squeezer to keep the flat head rivets in the proper position when setting the rivets.

Sunday, October 2nd, is the "Open House" at the Collegedale Airport.  I will be flying EAA Young Eagles in my airplane and providing information to the public about home-building of kit airplanes.   Collegedale Airport Manager, Frank Zarsky, has asked that I get to the airport around 9 AM.  The weather for tomorrow is supposed to be better than this morning.  I should be posting new pictures from that event Sunday evening.

Wendell has been working on his RV-8 project learning how to back-rivet and use the squeezer to install rivets.  The latest news an pictures about his project are found on THIS PAGE in my Other RV section.  I did not take any pictures in today's short session.

October 2, 2005:  This entry is being made on October 9th to bring you up to date on what has been going on in the past week.   First, the Sunday open house at Collegedale on October 2nd was no big deal, at least for me.  I was delayed by some ground fog both at Collegedale and at Wendell's field.  When I called the airport and they reported blue skies, I took a look at the thin layer of fog at my location and decided it was thin enough to take off since I had plenty of runway visual range and the sun was starting to shine though.  It was interesting to see the cloud of water vapor form on the tips of my propeller during the runup and again at takeoff power.  I punched up into clear air right after takeoff and headed around the Chattanooga Class-C airspace for Collegedale.  The last remaining ground fog was in the Tennessee Valley just west of the ridge adjacent to the Collegedale Airport.

I topped off the fuel tanks with about 6.3 gallons of 100 low-lead and got ready to fly "Young Eagles".  There turned out to be only one 12-year-old boy that was serious about learning about piloting.  He was fearful of flying in the airplane, so I at least got him to sit in the airplane while I explained everything about control surfaces, the joy stick, instruments, etc.  When I was explaining the GPS to him, he asked "Does it show the power lines?"  I replied "no, but this does" as I opened the Atlanta Sectional and showed him a power line depicted on the chart running from Lafayette to Dalton, Georgia.  I explained about victor airways, VOR transmitters, and the VOR receiver with OBS indicator used to follow those airways.   He seemed to be serious about his interest, but that would not overcome his fear of flying.  I gave him an expired Atlanta Sectional to take home and study, and my card to let him know that when he changes his mind about flying, to give me a call.

You may have seen the note on the home page about me going down to Atlanta on Friday, October 7th for some family business.  I also visited my old cable friend, Marty Mason, to give him some training and get him started publishing his own web site.   After getting the video monitor resolution set to "reasonable viewability", I gave him some hands-on time with Front Page 2003 and showed him my Front Page 98 and how the two programs did the same things.  It was Friday afternoon in his basement where I updated my home page to show him about publishing from FP98.   I also pointed out how the "Front Page Explorer" and "Front Page Editor" had been combined into a single program on FP 2003 he has on his computer.

Marty also showed me his Europa airplane project scattered about in his garage and in his separate workshop behind his home.  Sorry, it was raining that afternoon and I did not get out my digital camera to take any photos of his "work in progress."  There will be more visits to Marty's shop and you will get a chance to see a non-Van's builder on some pages of this web site someday.

This is Sunday and a leisure day for me to go get some groceries, etc.  I have been planning my trip to LOE5 for later this week.  I have selected fuel stops along the route and I will get a chance to meet Doug Reeves this week since he is one of the organizers of the Land of Enchantment RV fly-in that is the biggest meeting of RV builders and pilots other than Van's Homecoming.  In case you missed the posting earlier in these pages, homecoming was cancelled due to runway construction work at the Aurora, Oregon airport in the days before and during the Labor Day weekend.  That is when homecoming is usually held at the Van's Aircraft factory.

October 12, 2005:  The laundry is done.  I have taken a few things to the hangar and started to pack the airplane.  I also removed the right seat back and cushion in order to repair two stitches in the upholstery that had pulled out in one of the stars.  The windshield is now clean and ready for the flight tomorrow over to Oklahoma and to the Fort Worth, Texas area where I will spend the night before flying out to the El Paso area on Friday with some of the RV pilots from the DFW area.  My room tomorrow night is at the Hampton Inn across from the Fort Worth/Alliance Airport.  I will post the first of some new pages on my LOE5 trip when I get settled into the room tomorrow evening.   There will be pictures posted, to share the experience from tomorrow's trip west.

I took a few pictures in the shop at Wendell's showing his current status of the RV-8 empennage kit.  You can see those picture on THIS PAGE.