October 13, 2005:  It was a slow start this morning from the Chattanooga area.   I had to wait for some ground fog to burn away.  The photo below is Sand Mountain that runs through NE Alabama and up to Dade County, Georgia.  There was plenty of ground fog in the low areas.  I had to wait over an hour past my original proposed departure time to allow the fog to dissipate at Wendell's home field.  I got airborne around 9:45 AM Eastern Time this morning. 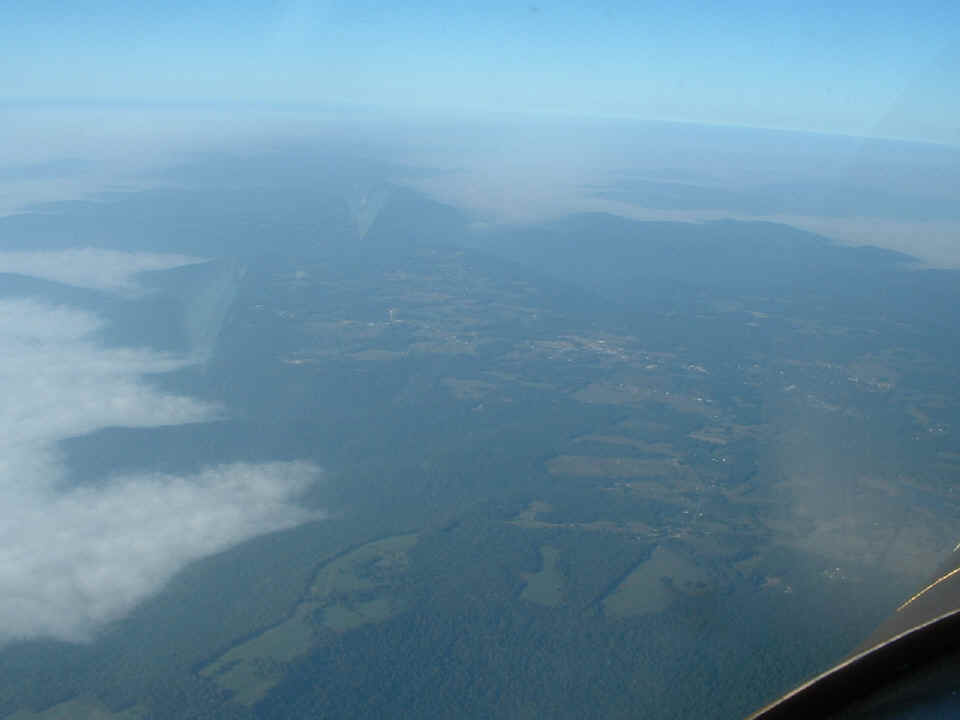 UPDATE!  You can now take this trip to LOE5 via a Virtual Flight using Google Earth in tour mode.  Learn how it is done, then download the edited Garmin database file from THIS WEB PAGE.

I landed at Idabel, Oklahoma for a fuel stop after flying for 3.5 hours.   This photo shows a deserted ramp at the airport.  When I went inside to the restroom, the front desk had a sign saying "Back Soon" as I passed by.  I went back outside to fill the tanks with 24.9 gallons of 100LL fuel at $3.15 per gallon instead of the $2.96 per gallon price advertised on AIRNAV.COM for this location.   It was lunch time when I was here, so I presume the attendant was out getting lunch somewhere nearby.  I made a call to Rodney Wren, a pilot who recently sent me an email with some questions about building my RV-9A.  We had already planned to meet at the airport near Hugo, Oklahoma. 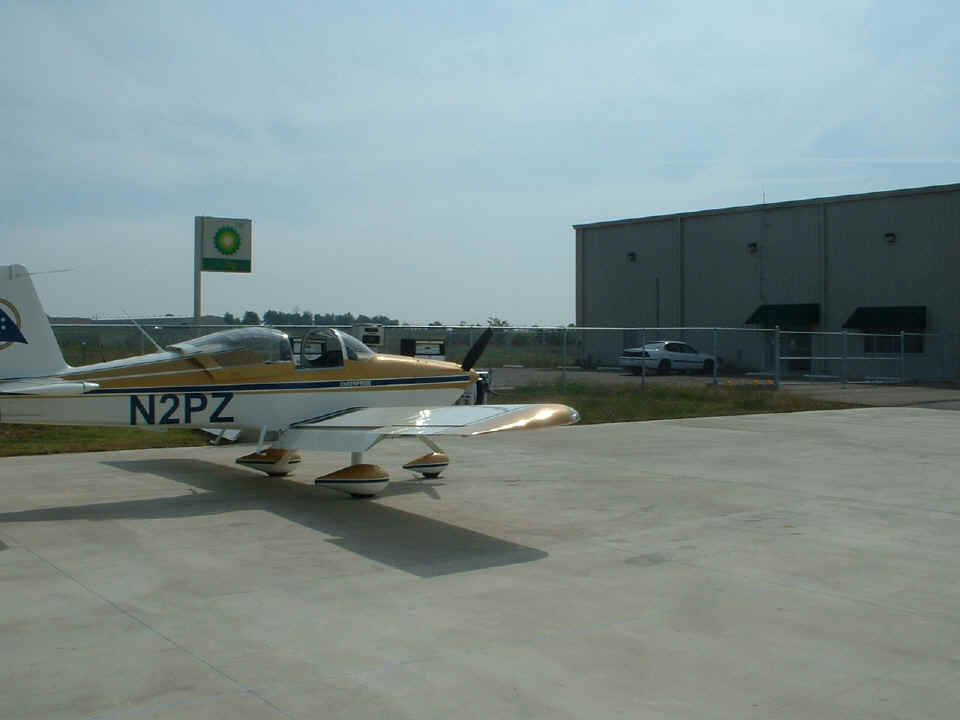 Here is a photo from the ramp at Hugo, Oklahoma with Rodney Wren standing by the airplane.  Sorry about the poor focus, but I can get a new photo of Rodney, the airplane, and the ramp at Hugo when I return this coming Sunday on my way home.  I will replace this photo at that time. 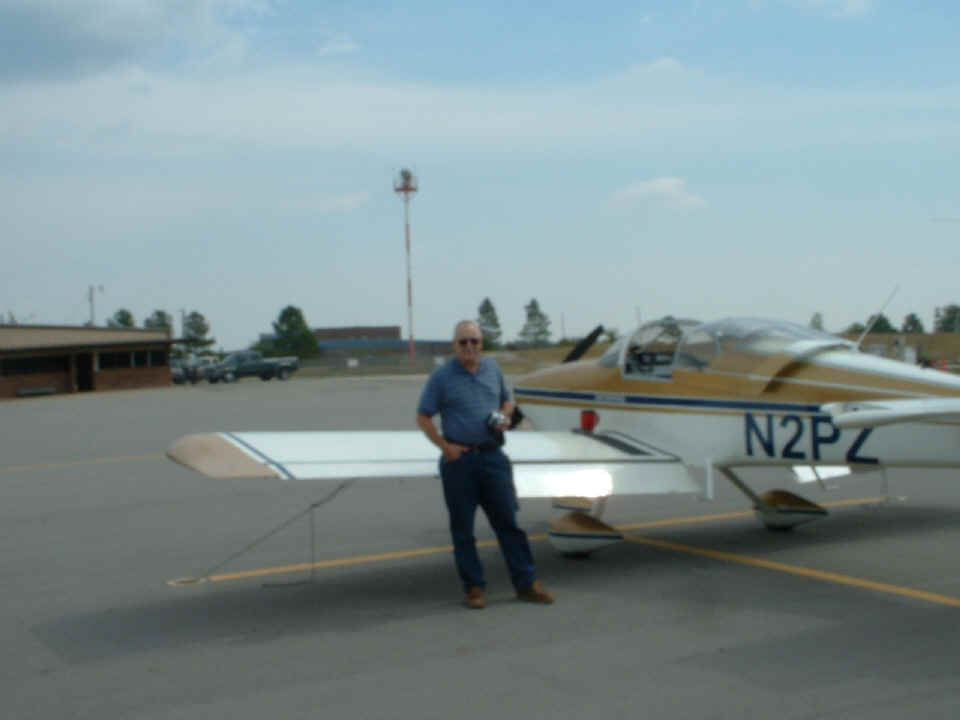 Rodney took me to a local barbecue restaurant where we discussed his thoughts about engines and airplane kits.  His first email was about building a 1200-foot grass strip behind a new home site where construction on the house has just begun.   More about that after my next stop here with Rodney.  He was standing on the ramp near the runway for my takeoff from Hugo.  I want to get a copy of that photo to post here.

As for the flight today, this ground track map tells most of the story.  I wanted to avoid the Columbus MOA's in Northern Mississippi, and that required a flight path near the Memphis Class B airspace before my route turned directly toward my fuel stop at Idabel, Oklahoma.  The GPS ground track mileage for today's flight to Fort Worth was 737.45 miles.  The Hobbs meter got an extra 5.0 hours added to it today.   The reading on my home page shows the total of 104.7 hours on the meter.

I got into the Fort Worth area by mid-afternoon and parked the airplane overnight at KAFW at Alliance Aviation Services.   I knew this was a different kind of airport when I was monitoring the control tower frequency while I was still 50 miles away.  The traffic in the pattern included T-34 jet trainers, Boeing 767's, and even a lowly Cessna 172.  As I was on final behind a Beech King Air, a FEDEX 767 was holding for clearance at the north end of runway 16L.   I kept my speed up and landed long and fast on runway 16L -- 9,600 feet in length and 150 feet wide.  The threshold was displaced on the north end.  By the time I was ready to touch down and pull off the runway, I was at intersection "F" near the FBO.

When I pulled into the ramp, I parked next to an RV-8 while I went inside to check-in at the front desk.  The RV-8 belongs to a regular "commuter" who flies into Alliance every day during the work week.  Another RV was parked further down the ramp.  I was so busy unpacking "Enterprise" for the night, I forgot to take a picture on the ramp at Alliance.  As I was getting the tie-down ropes in place, an American Airlines 767 landed and pulled up on the taxiway adjacent to the ramp.  After a minute or so, the 767 continued to their maintenance facility at the north end of the airport.  You can see and print the official FAA airport diagram by clicking on THIS PDF LINK.

Operations Specialist Leon Lee was very patient with me as I pulled out the things I needed to take to the Hampton Inn tonight.  Leon asked questions about how long it took to build the airplane and I gave him the straight answers including the ones about learning how to rivet the hard way on the empennage.  He also drove me 1.5 miles to the front door of the hotel on the other side of Interstate 35W and at the next exit south of the airport exit.  This was top-notch service for a pilot on a budget just paying the overnight tie-down fee.  Thanks, Leon for a very good experience.

Tomorrow morning, I have a very short 6.6-mile flight up to Northwest Regional Airport (52F) to meet up with the other RV builders and pilots for the trip out to the El Paso area.  The meeting will be at the hangar used by Doug Reeves.  I will get photos to post here tomorrow night after I get into the hotel on the northwest side of El Paso.

October 14, 2005:  I got back to Alliance Airport before dawn and finally got the chance to use the lights in the baggage area when I was repacking the airplane on the ramp.  When everything was ready, I contacted ground control and headed up to the north end of runway 16L for a short "night" flight up to Northwest Regional Airport.  There I met up with Doug Reeves and a few other RV pilots and planes and began the trip west to the El Paso area.   It was obvious right after takeoff that I was the heaviest airplane and the lowest powered.  I had Rob Reece with me and we advised the group that I would fly along separately and arrive a few minutes after the guys at the fuel stop at Andrews, Texas.   (October 15, 2009:  Here is the only photo I took between Fort Worth and the fuel stop at Andrews, Texas.  It is hard to see in the haze, but there is a windmill farm out there producing electricity.  Look carefully in the middle of the photo where the land is dark.  I did not post this photo when the page was orginally created.  I did some contrast enhancement in Corel Photo Shop and decided it would be usable.) 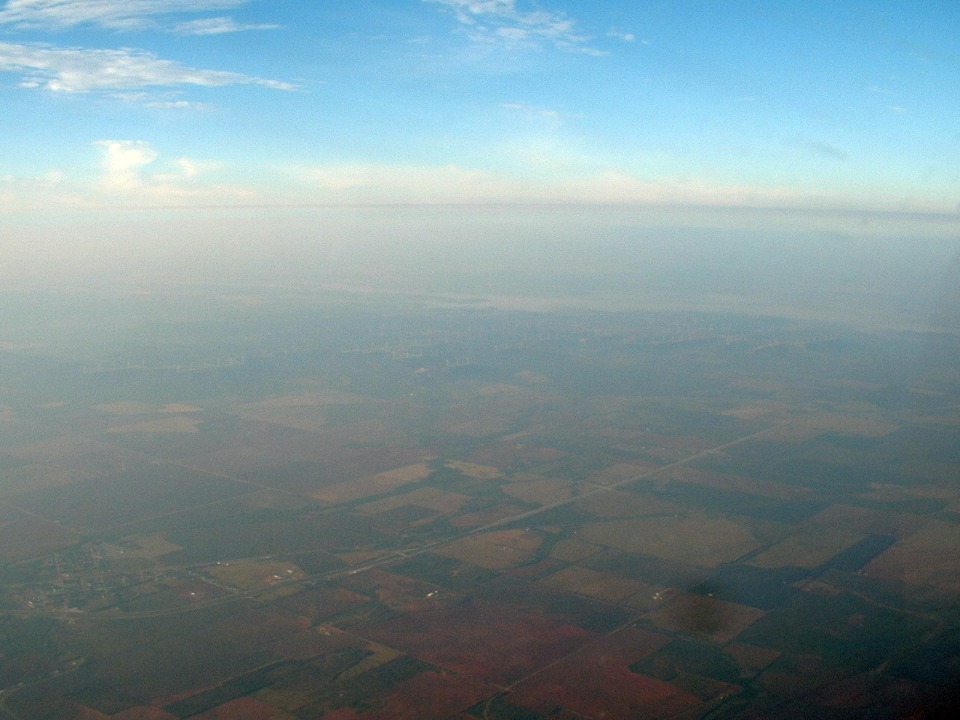 You can see the weather was nice here in West Texas.   This photo shows the airplanes on the ramp at Andrews, Texas. 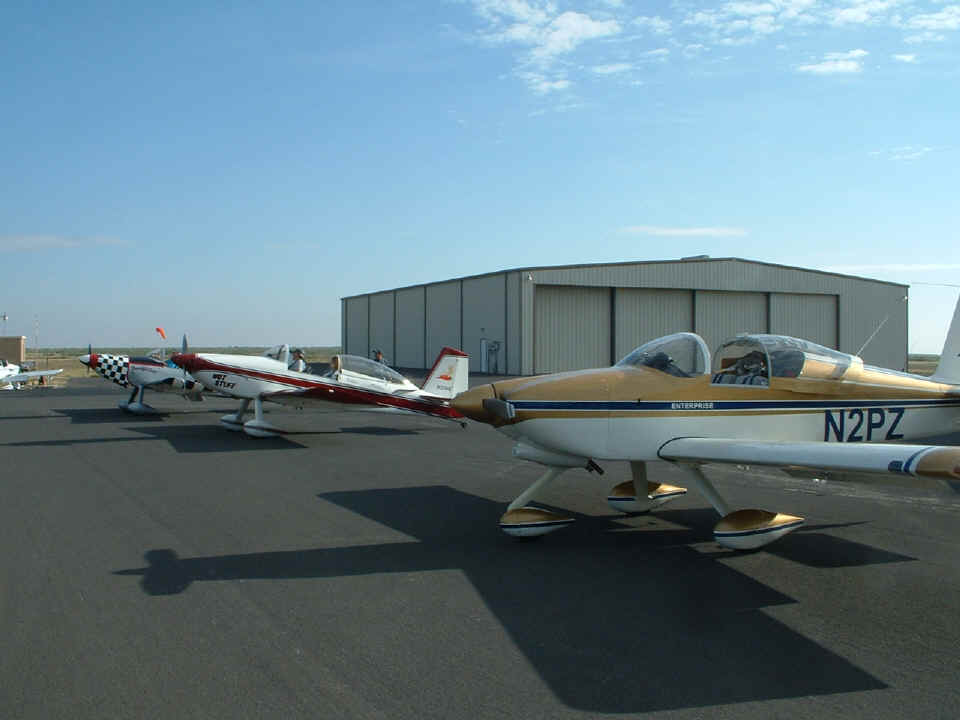 This shot shows some of the other planes from our group that departed the Fort Worth area just after sunrise.  The yellow RV-4 at the fuel pumps came in behind us as part of another group coming from the DFW area.  In the air enroute here, we could hear what appeared to be TWO other groups following us to the RV fly-in at the Dona Ana Airport (5T6). 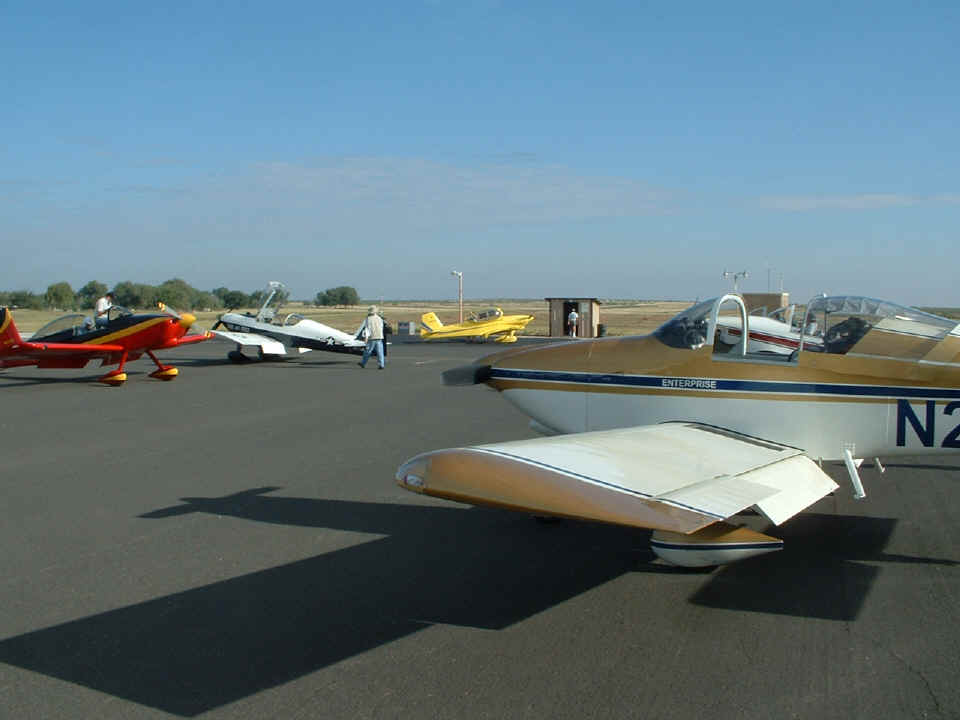 Here is a better shot of two airplanes from our group parked next to mine at the Andrews, Texas airport ramp.  An RV-6A is getting fuel at the right side of this photo. 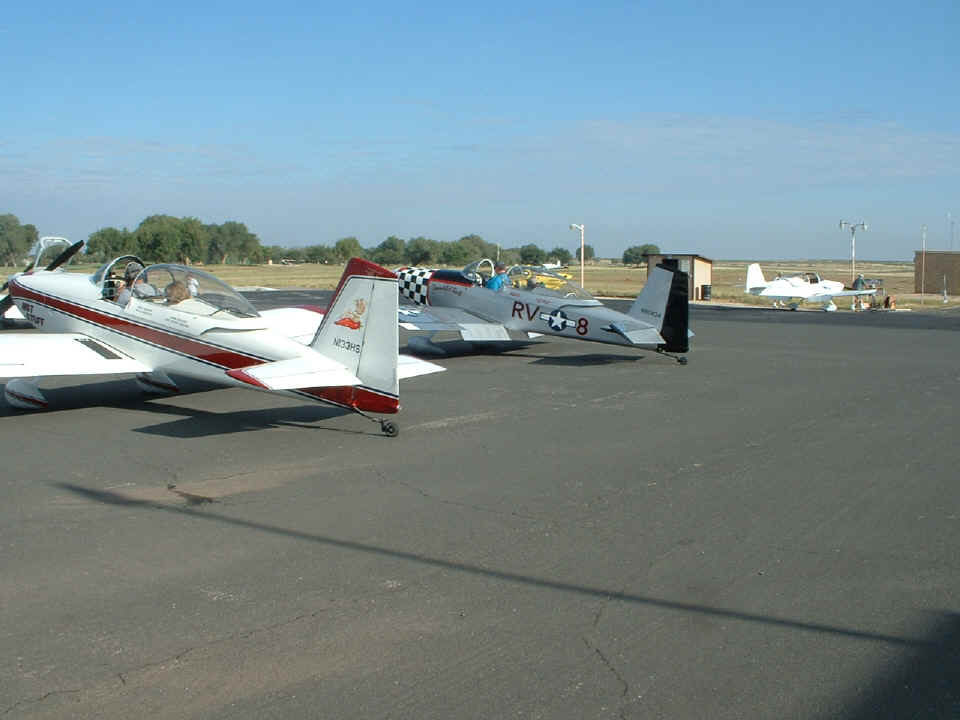 This is the view looking the other way toward the FBO building.  There was only one taxiway coming into the ramp and it made an interesting departure to get back to the runway for departure.  What was the reason we had a traffic jam of RV airplanes stopping in for fuel?  That other group of airplanes we heard on the radio arrived for fuel as we were departing. 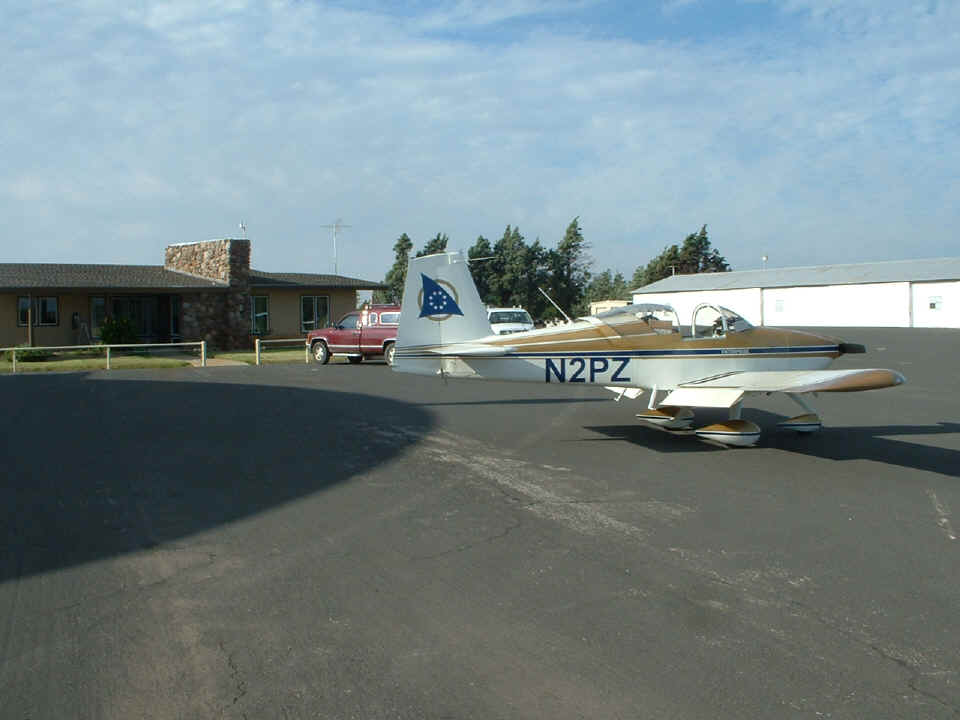 After departing Andrews, it took less than two hours to get to our destination.   To see some of the sights we encountered, go to PAGE 175 for the flight toward El Paso, Texas.