September 11, 2004:  Hanging the engine was the big deal today.  I called Rich Nadig after I finished with his hoist and gave him my old wing jigs to use on RV-4 wings for his Harmon Rocket.  Here is my O-320-D1A hanging from the hoist as I am ready to place it in position for insertion of spacers and bolts.  I removed the spin-on oil filter right after I took this shot to make it easy to get the engine through the mount. 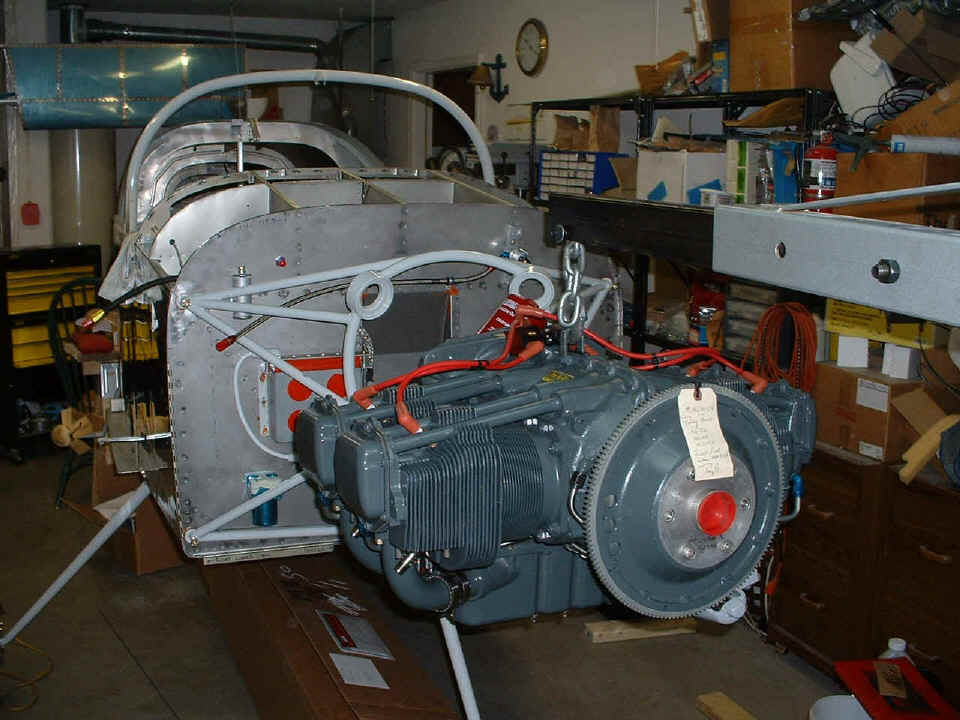 And here it is after putting in all four engine mounting bolts and cotter pins.   Now to start connecting all the stuff that makes it go.  You can see all four of the spark plug wires from the magneto hanging down in the bottom right quadrant of the picture. 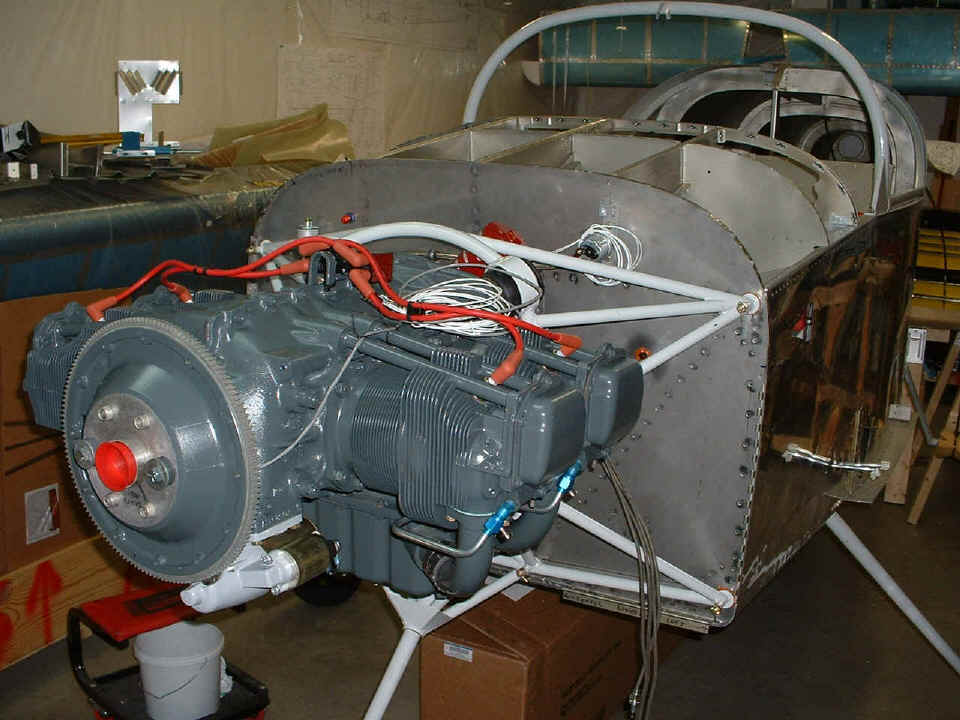 Rather than bore you with photos of the connections to the carburetor for throttle and mixture, or the propeller control cable to the prop governor, I thought I would just take this picture of all the controls mounted on the other end of them all.   The only one not connected as of this session is the little black knob on the left side, which is the carburetor heat control.  For some of you who are not pilot savvy, the other three knobs are throttle (BLACK KNOB), propeller control (BLUE KNOB), and mixture control (RED KNOB).  I still have to install the clamps that keep the cables inline at the second bulkhead behind the instrument panel.  After that, each cable snakes its way to the firewall where each has a specific point of passage to the engine compartment.  I also have to put some more of the RED high-temp RTV silicone into the fittings that pass each cable through the firewall to seal out vapors, etc. 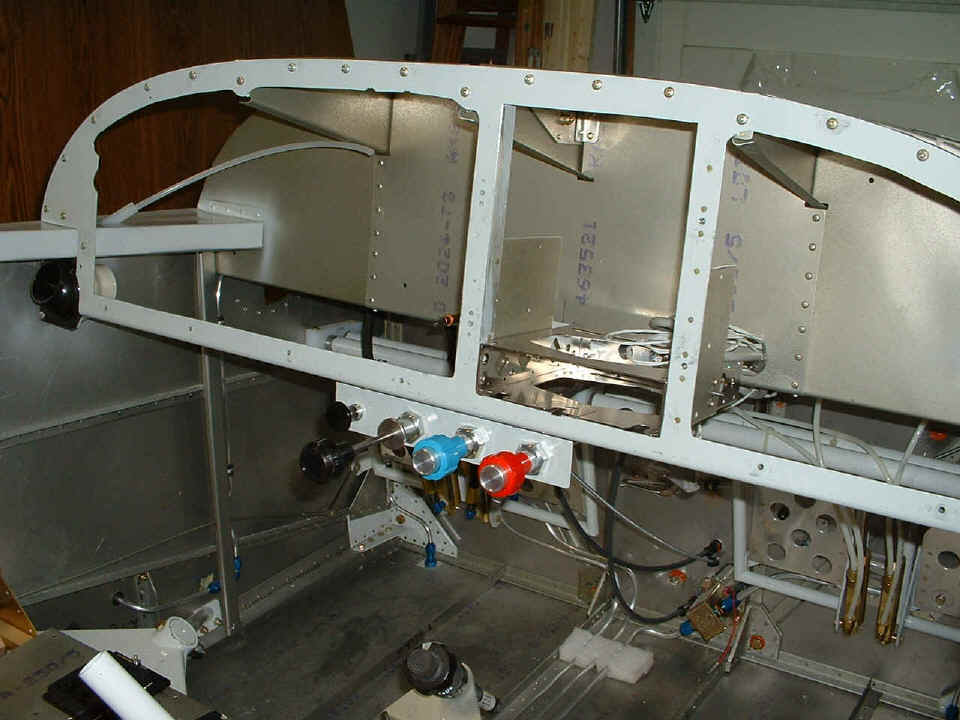 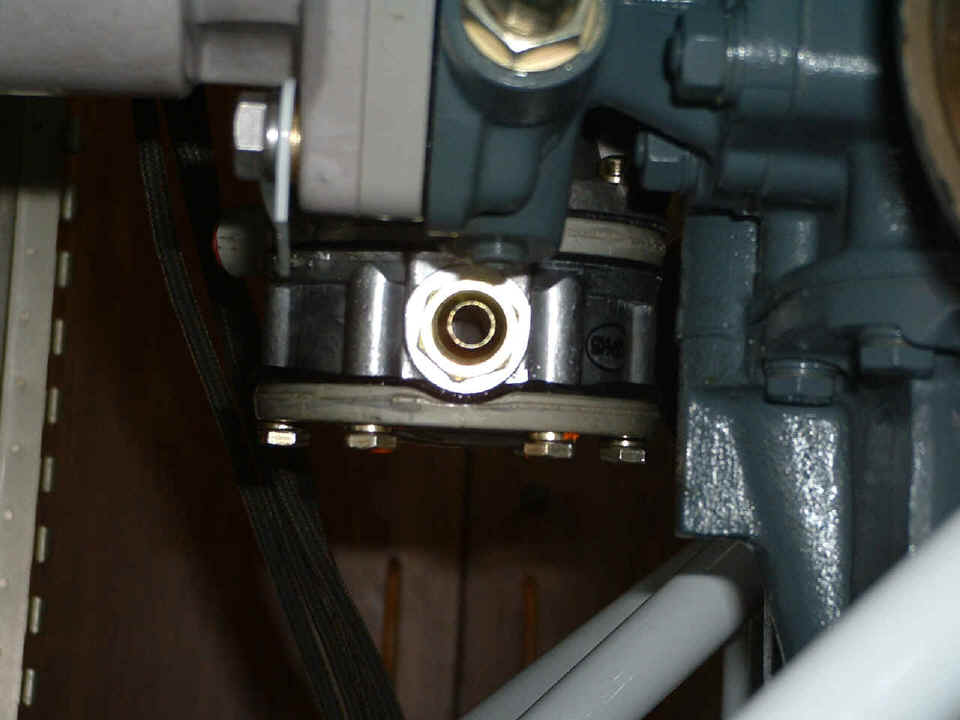 Here you see the results of my installation of the large cable from the starter solenoid around the oil sump going to the starter.   This photo also shows the BLUE gas colator below and left of the battery.  It now has a short brass pipe and coupler relocating the fuel drain plug to a level below the fuselage and cowling.  I learned this trick from Larry Westbrook in December 2003. 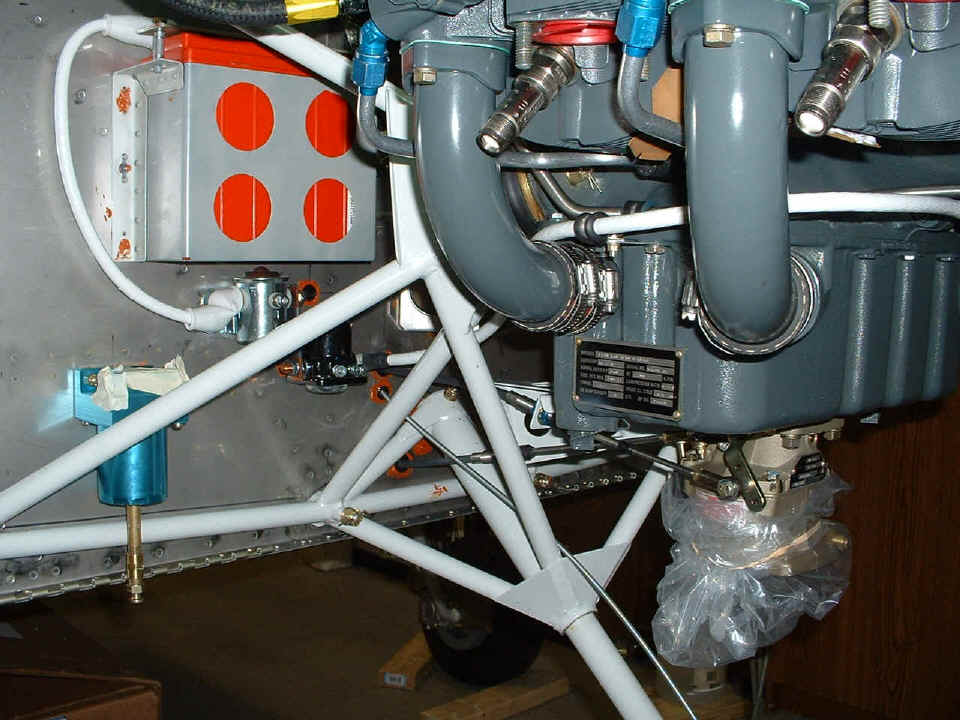 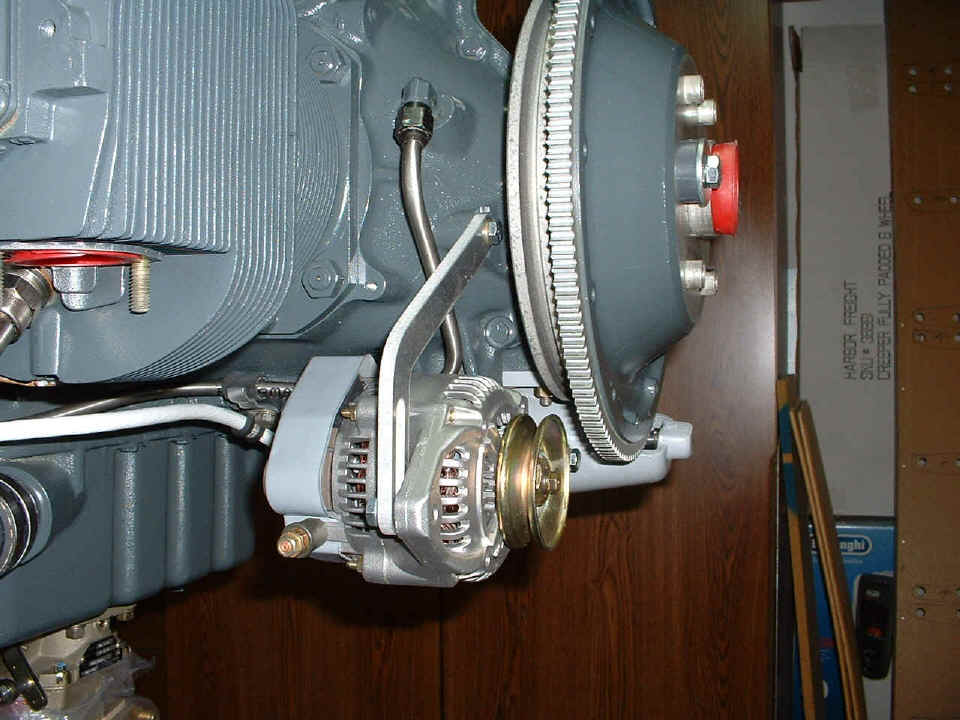 Tomorrow I am back on the road for the company for two weeks again.  I sent an email to Grand Rapids Technologies to order the other three sensors that I need to activate the additional features.

September 26, 2004 -  I am back from the road trip and managed to get a bit of work done today using the parts I bought at Aircraft Spruce & Specialty on the way out of town 13 days ago.  I spent a week in Miami, then a week in Washington and a part of Idaho.  I flew back to Fort Lauderdale to pick up my car and drove straight home ahead of Hurricane Jeanne.  That was a 24-hour day.  Up at 6 AM Eastern Time (3 AM PDT) to catch a plane from Spokane to Salt Lake City, then to DFW, and finally to FLL.  At least I got a first class seat from SLC to DFW and a meal.  I got to my car in long term parking around 6 PM on Friday and drove strraight through to East Ridge, Tennessee.  I saw quite a few folks checked into hotels when I passed the Valdosta, Georgia area.  I bought gas after checking out some hotels and headed for home.  I stopped for breakfast around 5 AM to wake up, then finished the last 30 miles.

Today was put the fuel flow sensor in place after fabricating an aluminum angle that I could drill to the firewall stiffeners.  I used the extra firesleeve fuel lines I got from David Edgemon to make the connections to the sensor and then to the fuel pump input port.  I had to loosen the plate on the bottom of the fuel pump to get the fitting and hose in place.  When the plate was put back in place, the firesleeve line pushed up against the bottom of the prop governor.  The fuel line going from the gascolator to the input of the fuel flow sensor is at the bottom left of the photo below.  The fuel line going to the fuel pump input is the one with the big "03" in the top center of the photo.  The gray aluminum body of the fuel flow sensor can be seen with a 45-degree blue AN fittiing on it at the end of the hose coming from the gas colator. 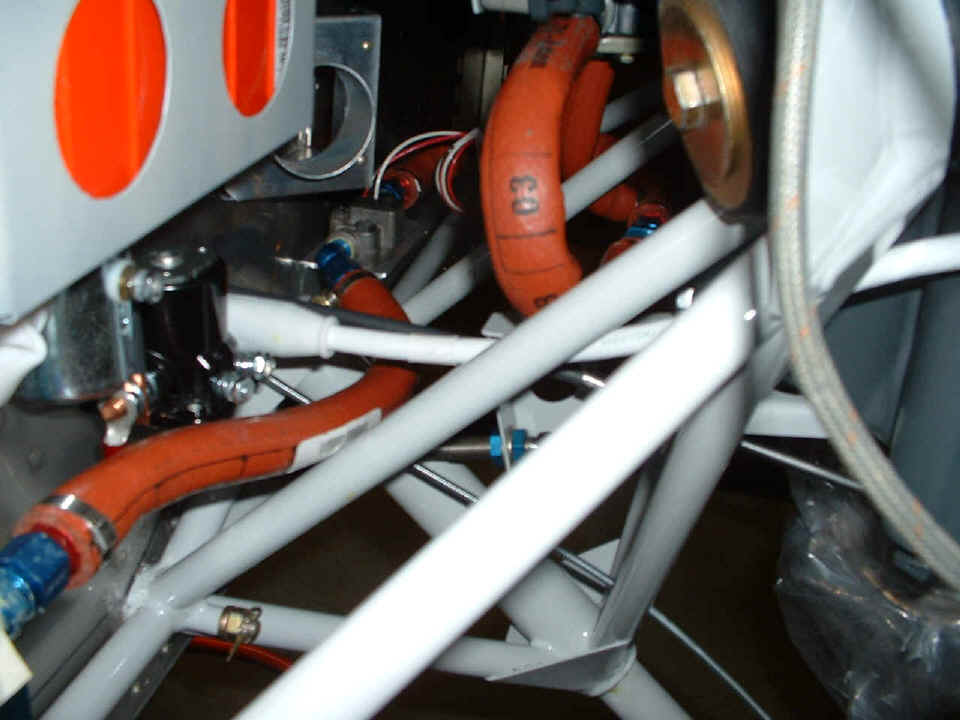 Here is the view from the other side of the fuel flow sensor.  The brass fitting with copper pipe pointing down is the fuel pump overflow tube that has to be connected to another tube not yet installed.  The coil of red, white, and black wires are coming out the top of the fuel flow sensor.  The firesleeved fuel line coming directly toward the camera doubles back under the fuel pump to make the input connection shown in the photo above.  The silver braided fuel line with the red crimp fitting is the fuel pressure sensor line going up to the sensor mount on the firewall.  The firesleeved fuel line with the blue AN fitting on it is the one going to the carburetor input port from the fuel pump. 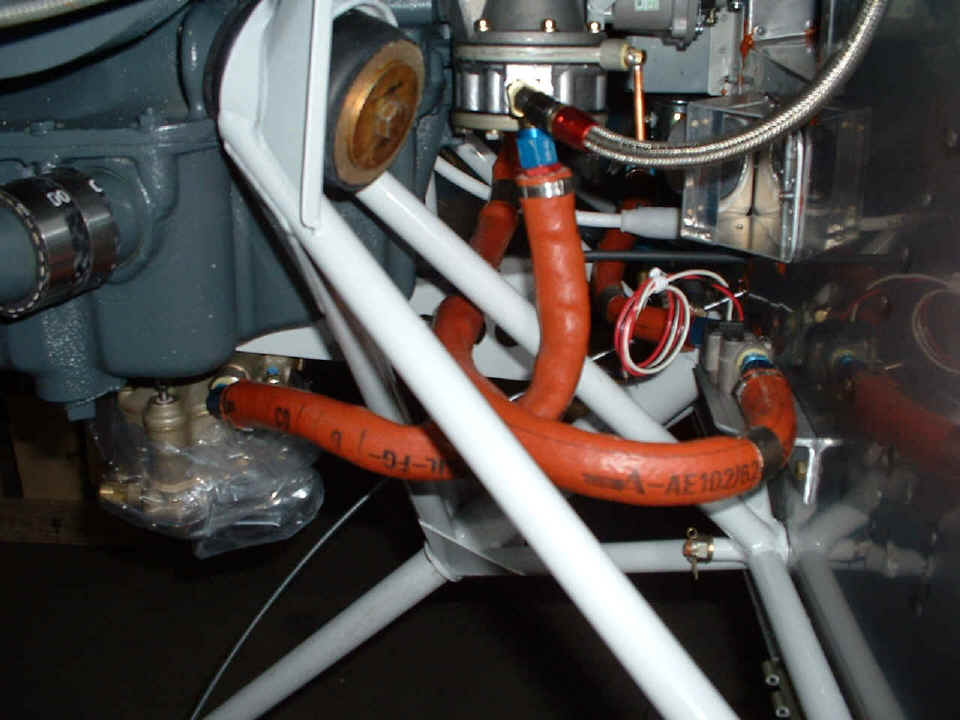 And here is the last photo for this page and for today, the aluminum angle bracket fabricated to mount the fuel flow sensor.  I drilled out one rivet through the firewall and replaced it with a 3/16" AN bolt.  The other AN bolt is drilled into the second firewall stiffener half way between two rivets.  And yes, there will be some large tywraps installed on those fuel lines where they cross each other and sections of the engine mount - but not now.  I seem to find the sharp edges of those tywraps when I cut off the ends.  My hands and arms have a few scabs and scars to show for it.  I have tried to wipe off my blood stains when that happens.  I now know what "Blood, Sweat, and Tears" really means when building this airplane. 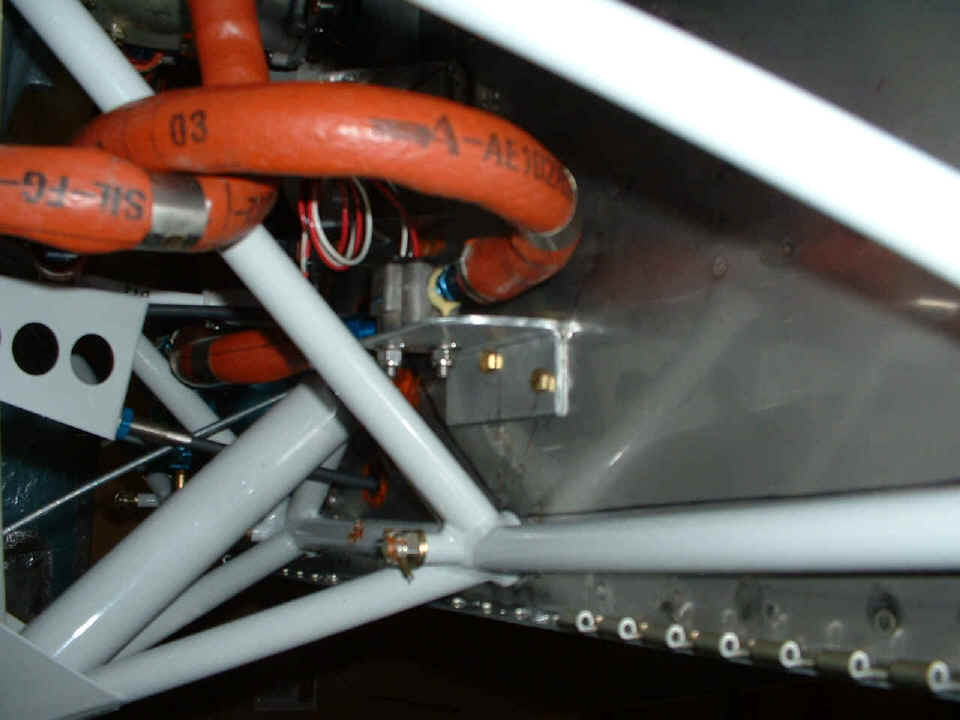