I went to Oshkosh in 2002 to decide on an airplane to build.  If you have been reading all my other pages, that decision is obvious.  So this year, I want to find out some things about the stuff I am going to put in the control panel and get some tips on working on the fiberglass parts of the RV.  I am also doing some non-interstate highway traveling of US 41 - another of my interests.  Here are some of the photos of things that I found along the way.  I hope you enjoy them.  I will post more stuff in the coming week along the way and at AirVenture 2004 Oshkosh.

Sunday, July 25, 2004:  This is Hale's Bar Dam Power House on the Tennessee River west of Chattanooga.  I guess you noticed the dam is missing.  The Tennessee Valley Authority (TVA) blew it up when the new, bigger Nickajack Dam was built a few miles down stream from here.  There is a marina to the right of this photo, but then I like airplanes, not boats.  And yes, that is KUDZU at the bottom of the photo.  Let's move on... 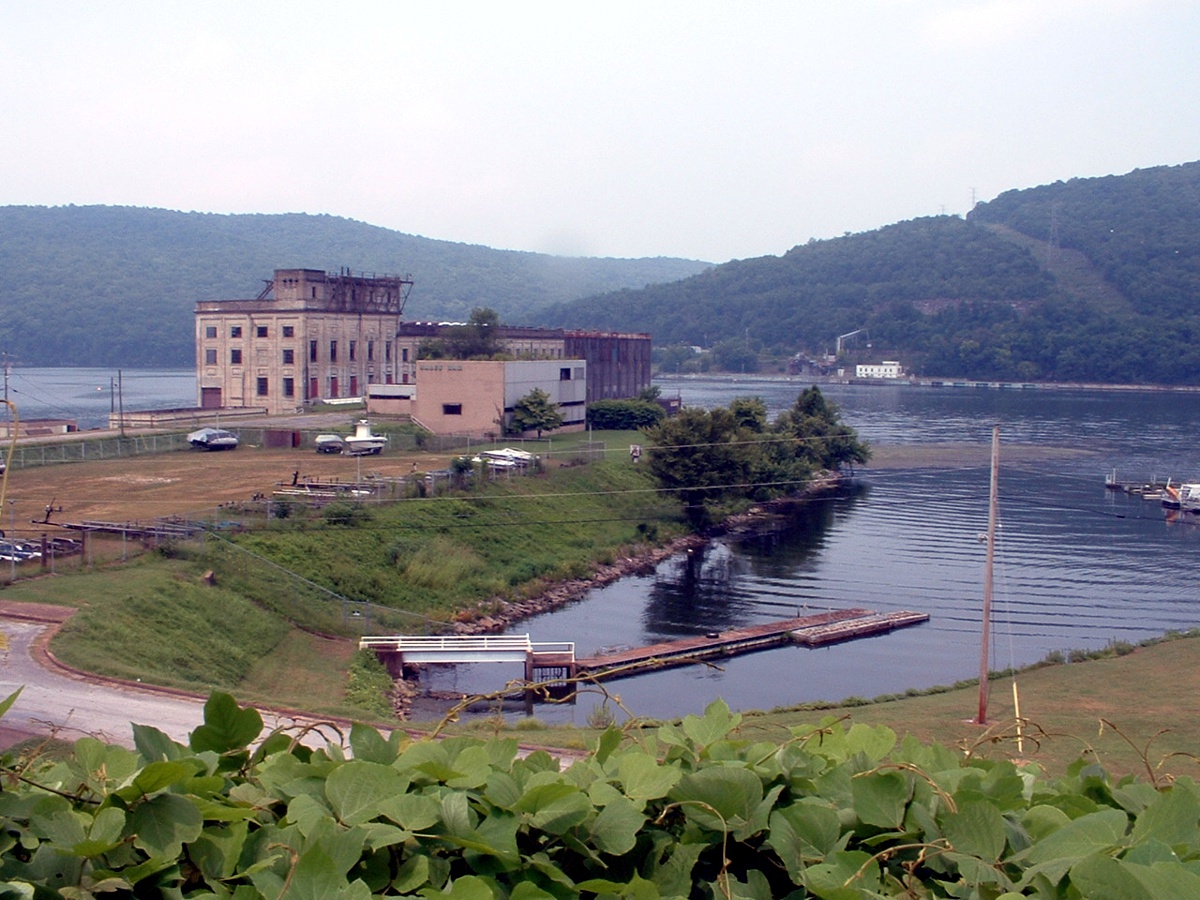 About a mile down river is this barge business.  These guys make their living moving big heavy stuff up and down the big rivers of this country.  I saw a few more of these guys late in the day as I was crossing the Ohio River north of Henderson, Kentucky.  Sorry, there was no place to stop and take a picture of the tug and barges there.  That truss bridge in the background is the old US 41 narrow two-lane bridge.  The bridge that is very faint behind and below the truss bridge is actually a pair of modern concrete bridges for Interstate Highway 24.  All of this is on Nickajack Lake about 25 miles west of Chattanooga, Tennessee.  There are two tugs anchored on the left shoreline.  Those other barges between me and the bridges appear to be dormitories -- yeah lodging for river workers.  And all those barges out in the river are anchored and have been there for several weeks at least.  I noticed them on a recent trip to Huntsville, Alabama to see another RV builder/pilot. 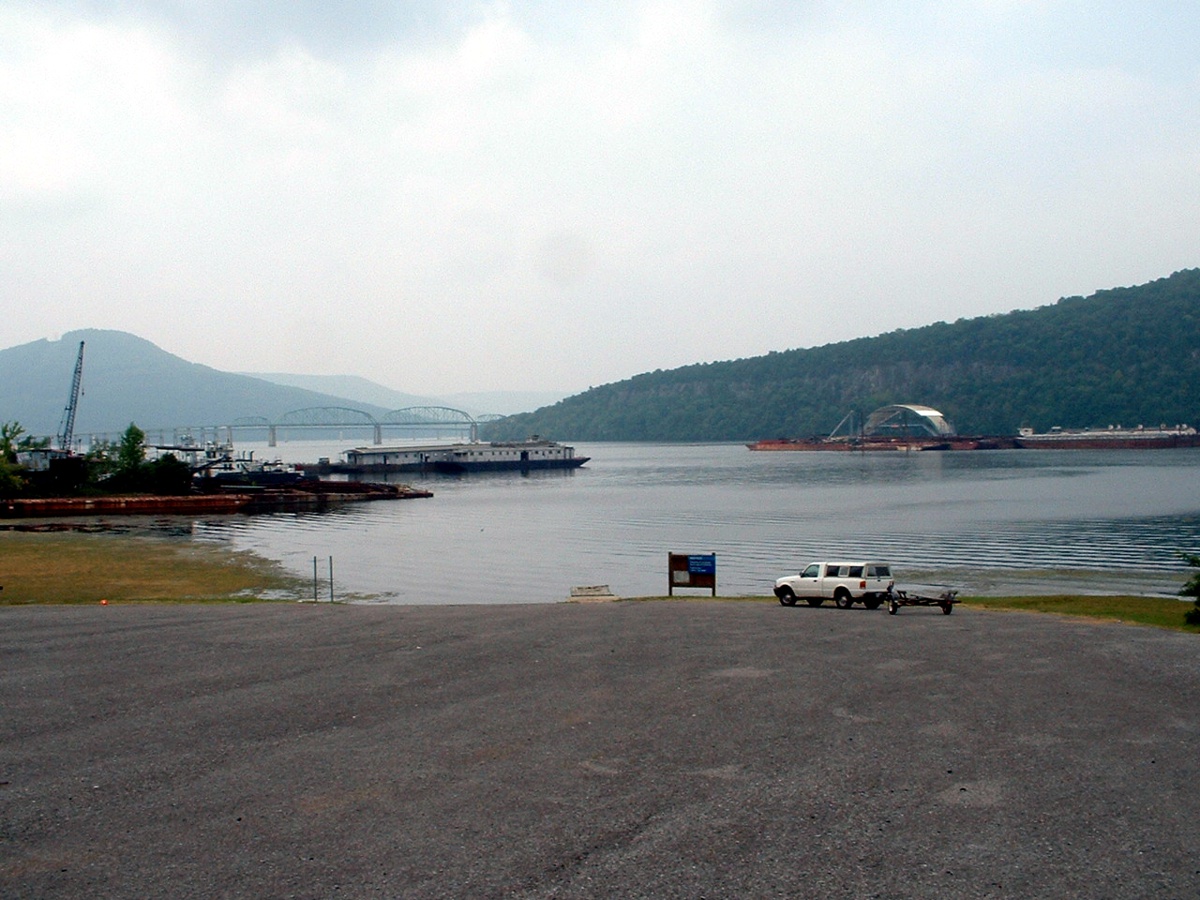 This bit of antique roadway advertising is on US 41 north of Manchester, Tennessee.  This type of advertising predates Interstate 24 which runs parallel to US 41 here.  It says "See Jessie James' Hideout, Meramac Caverns,U.S. 66 Stanton, MO".  Of course today US 66 has been replaced by  Interstate 44.  On the other side of the barn, what else could it be but "See Ruby Falls?"  Well, it could have been "See Rock City". 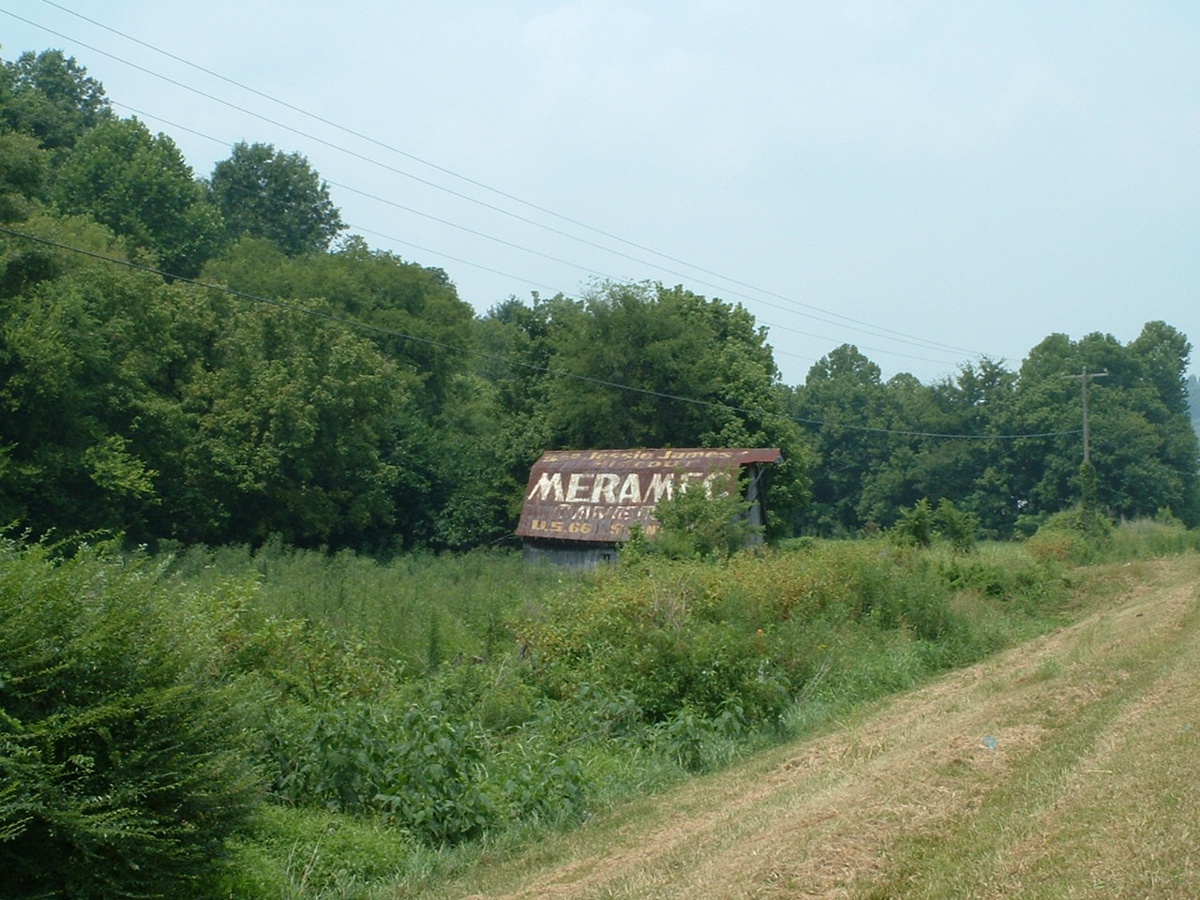 I was heading up through Nashville and had hoped to see Robert Tugwell about my canopy modification kit I bought from him, but we missed our connections.  I spoke with him later in the day and we hope to connect on my return from OSH.  After crossing the Tennessee/Kentucky state line for my very first time on US 41, I came to the little town of Guthrie, Kentucky right on the state line.  There I found a very OLD Standard Oil gas station on the corner at the north end of the main street where US 41 turns left.  Of course, today it has the Chevron name on it, but it is still in operation, but not on Sunday.  The pumps are fairly modern when you consider that building probably dates from the 1930/1940 era.  In those days they were called "service stations" because they changed oil and did other minor repairs not needed to be done by your car dealer.  And yes, that is a modern tow truck under the canopy with an old tow truck on its flat bed. This is taken from the same spot looking south down the main drag, Ewing Street.   This is classic, very small town Americana from the early 1920/1930 period architecture.  I am sure there are some older buildings here and some newer.   And there is the railroad down at the other end of the street.  The tops of the grain elevators are visible above the buildings at the center of the picture.   This is definitely farm country about an hour north of Nashville on a route not paralleled by the interstate highways. 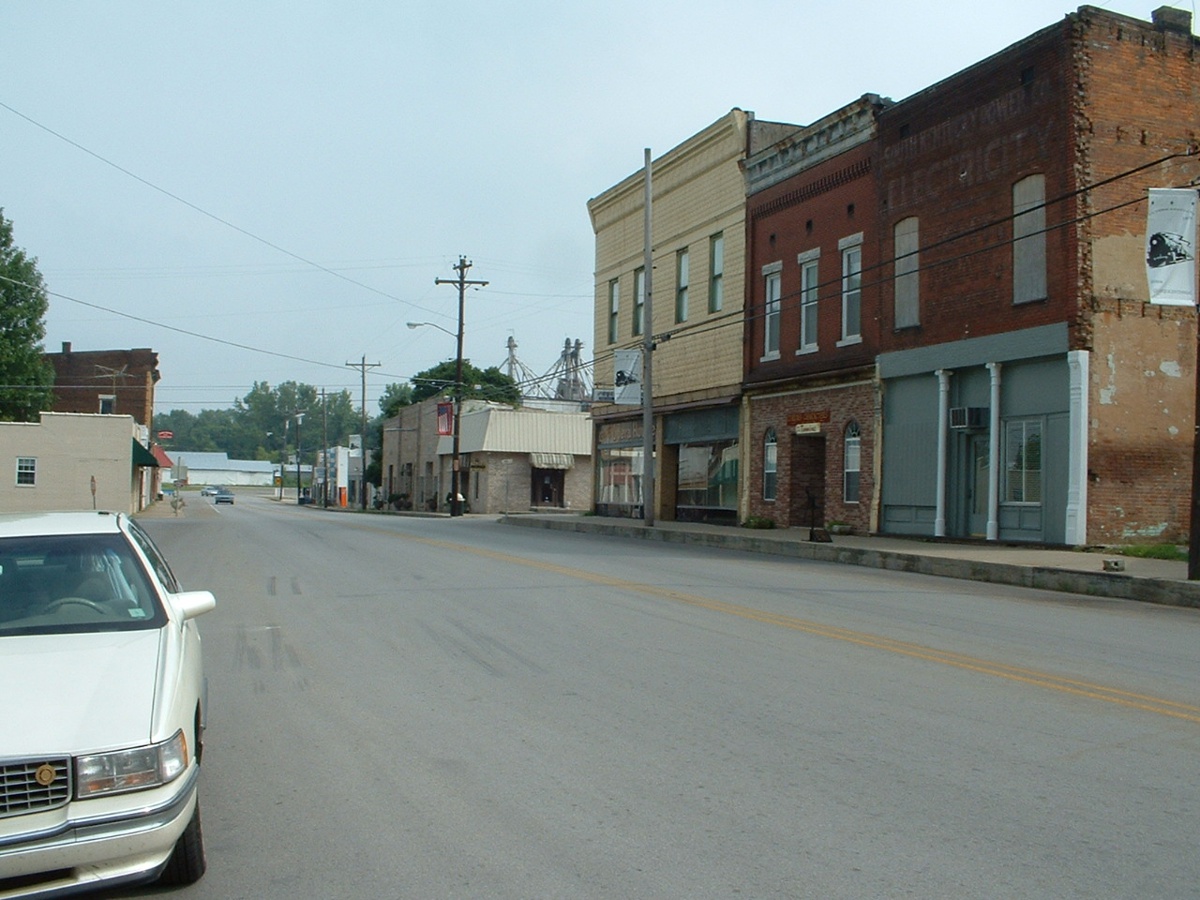 Just one mile west of the photos above is the intersection of US 41 and US 79.   This Pink Elephant is out front of a convenience store that sells gas and beer of course.  Here you don't have to drink the beer to see the Pink Elephant. Hopkinsville, Kentucky is the next town up the road with a good-sized population, manufacturing plants, and something other than farming to drive the economy.   This is also the next town north of Fort Campbell, Kentucky -- home of the 101st Airborne Division of the US Army.  That intersection down the street is the corner of US 41 and US 68.  I am standing in front of a family business one block south that caught my eye. 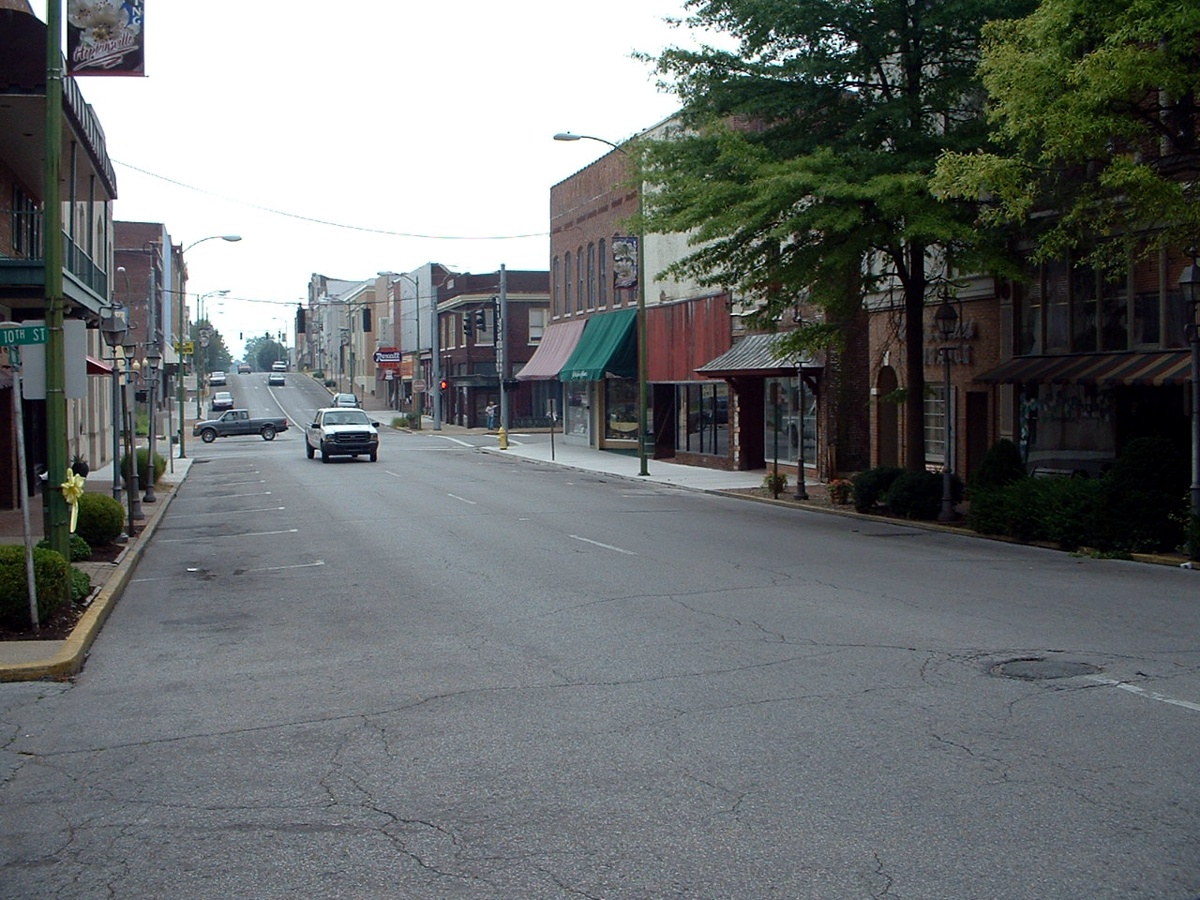 And here it is, FERRELL'S HAMBURGERS, Special BREAKFAST.  That old neon sign clock inside says "FERRELL'S SINCE 1929." This second shot from across the street should put things in perspective. That small store on the left does Tattoos.  And of course the "Bridge of Hope" was once the Montgomery Ward department store in Hopkinsville.  The sign at the far right of the photo says "Parking for Ferrell's Customers ONLY". Inside, it is just the counter with a few bar stools.  I had to press the camera up against the glass door to keep the flash from bouncing back into the lens of the camera.  No tables in this place, just the spinning bar stools firmly attached to the floor.  I talked to an old black man who was across the street to learn a bit about the owner and his "closed on Sunday's" business.  He said they served really good burgers and breakfast.  Why else would they still be in business, owned by the same family since 1929? I found this caboose just a few miles north of Madisonville, KY on US 41.   It was sitting in the yard beside a mobile home that was not much bigger.  I wonder what he does with it -- extra bedrooms?  Not far up the road from here I saw my first deer since I put the "deer whistles" on the front of my car.  That was due to a close encounter last fall when I hit a deer a glancing blow on I-75 about two miles from home.  I saw the deer before she saw me.  Sure enough, just like the card said, "Deer will stop in their tracks to see where the sound is coming from".  She stopped all right, directly over the center line of the two-lane highway.  I had already slowed down to about 40 mph when she looked right at me.   The deer casually walked into the wooded area west of the highway. October 25, 2020:  I have been reviewing some old web pages and decided I wanted to use Google Earth to find this old Caboose I photographed on the way to Oshkosh in 2004.  The actual location was 8.1 miles north of the center of town from Madisonville, Kentucky.  Those two trees have grown quite a lot since 2004.  The Google Earth image below was taken in June 2014 showing 10 years of growth. Here is the road map of US 41 north of Madisonville, Kentucky for those of you who are planning a trip in this area.  The US 41 marking heading west from Madisonville is actually US 41 A.  The real US 41 is the one highlighted in my map as it goes up to Henderson, Kentucky and Evansville, Indiana north of the Ohio River.