October 24, 2003:  SEATS!   At least that is what I worked on today.  I managed to finish both seat backs in sessions today.  I had already finished match-drilling all the holes in the aft top skins in an earlier session and removed the skins.  I also finished the aft baggage bulkhead panels as you can see in the second picture.  That was the same session where I put the baggage floor in and riveted it in place. 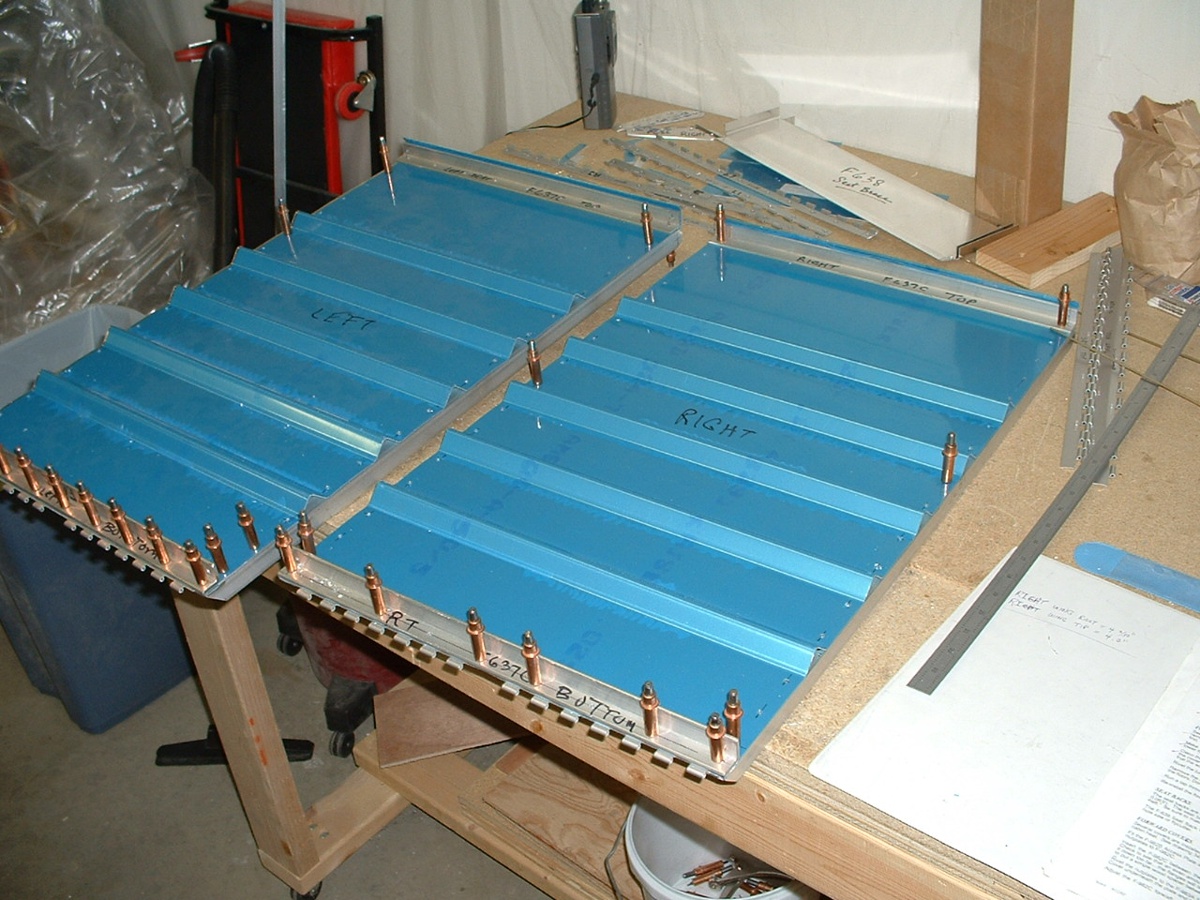 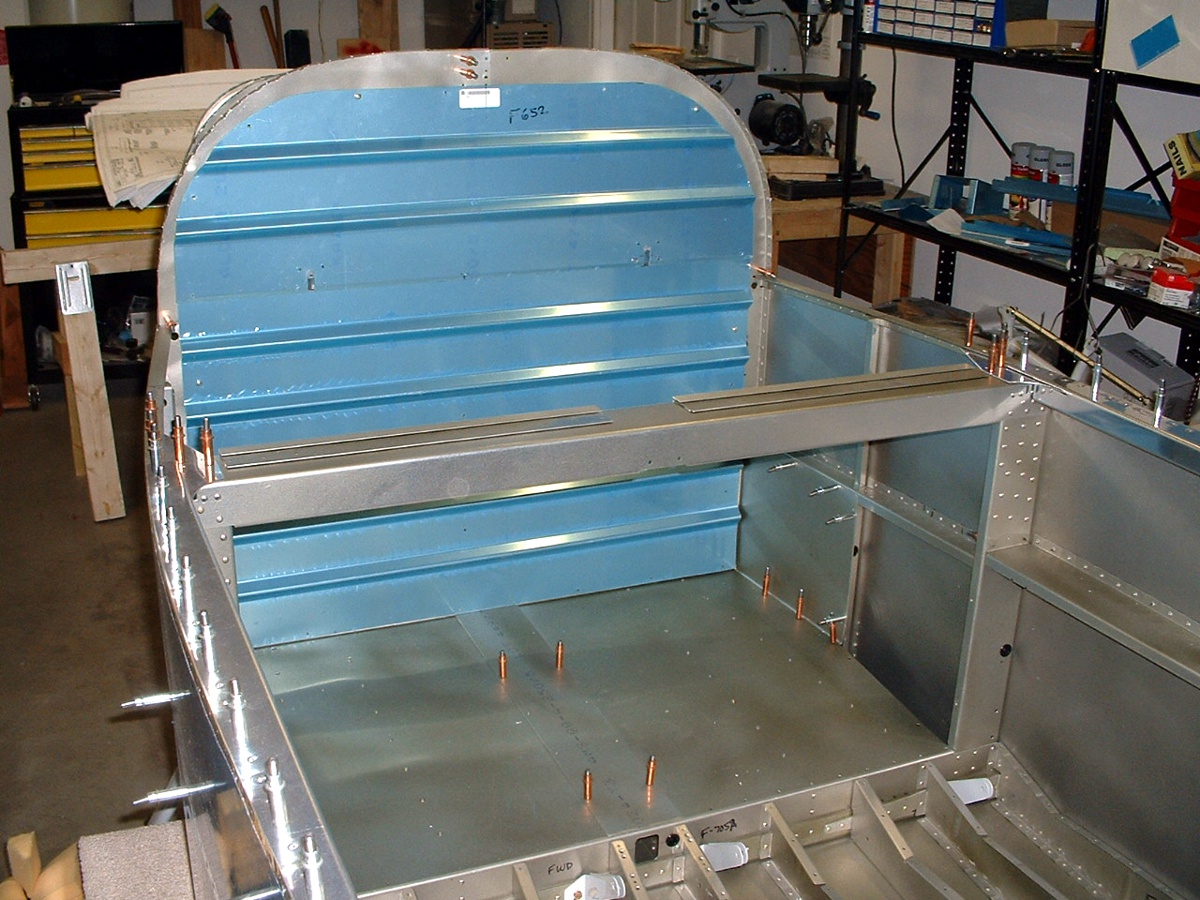 October 25, 2003:  I finished the back braces that adjust the seat recline and just had to put them in place, even though the seat floors and the hinges are not in place as you can see here. 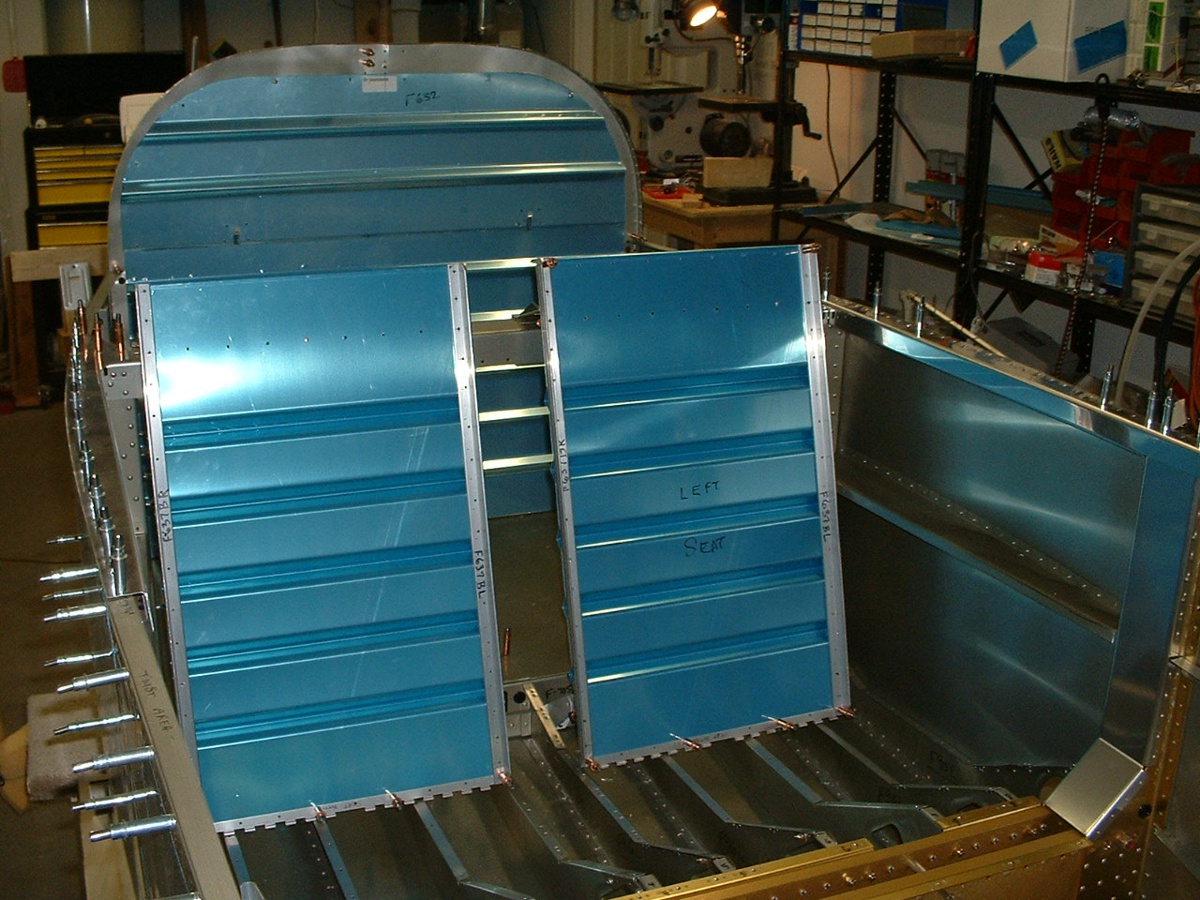 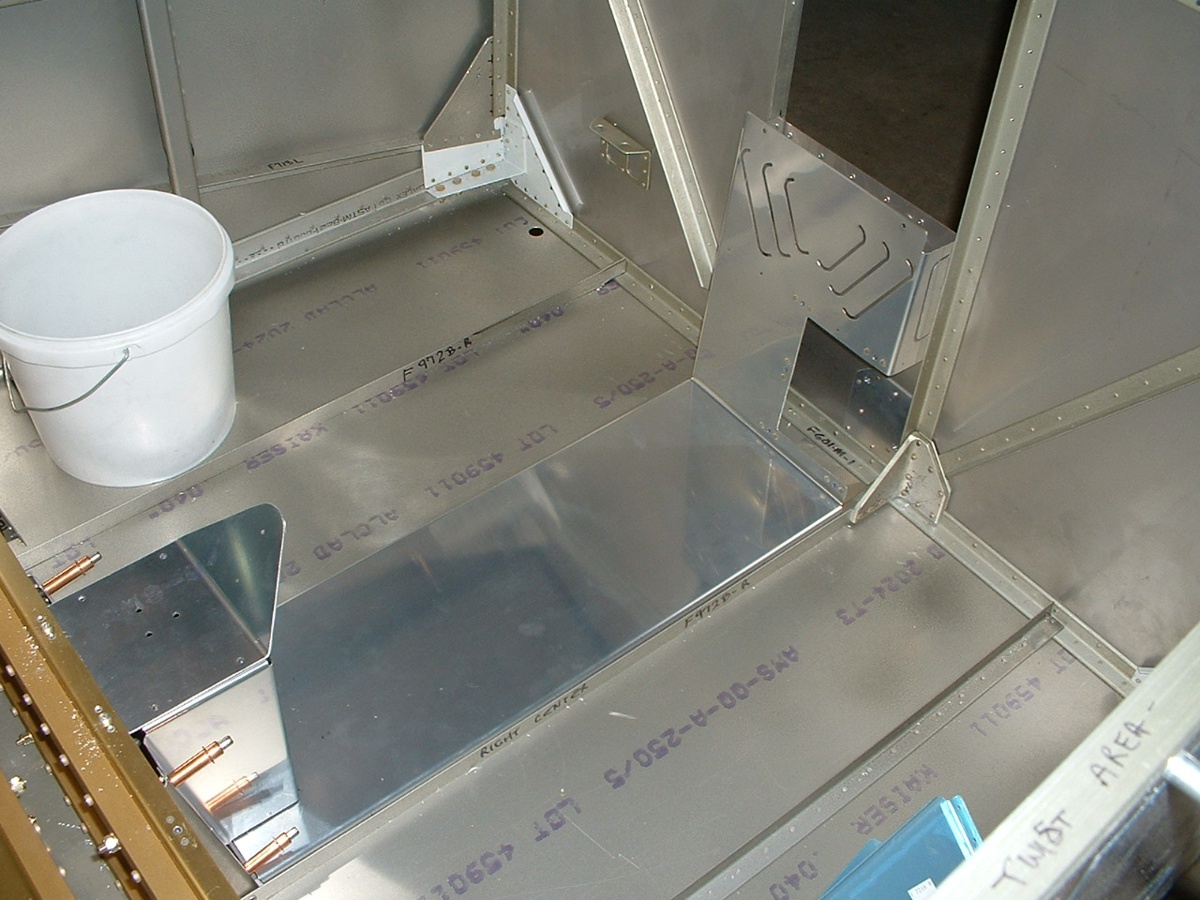 October 28, 2003:  It has been ONE YEAR today since UPS delivered the empennage kit and I started to put this airplane together.  The total construction time on the airplane now stands at 876.2 hours.  Other preparatory work time building jigs, fixtures, work benches totals 62.7 hours.  That gives a total time of 938.9 hours on the project.

The new milestone for today was getting the landing gear sockets bolted to the wing spar bulkhead.  I have 10 more bolts to drill into the lower longerons tomorrow and countersink the two holes on each side that I back-drilled during the installation today.  I have also been working on the flap actuator system, but did not take any pictures of those parts when they were installed.  I have since removed them for priming, and will take photos when they are put back in later in the assembly process.   Here is the landing gear shot from just over the top of the firewall, looking aft and down at the main bulkheads that connect the wings to the fuselage. 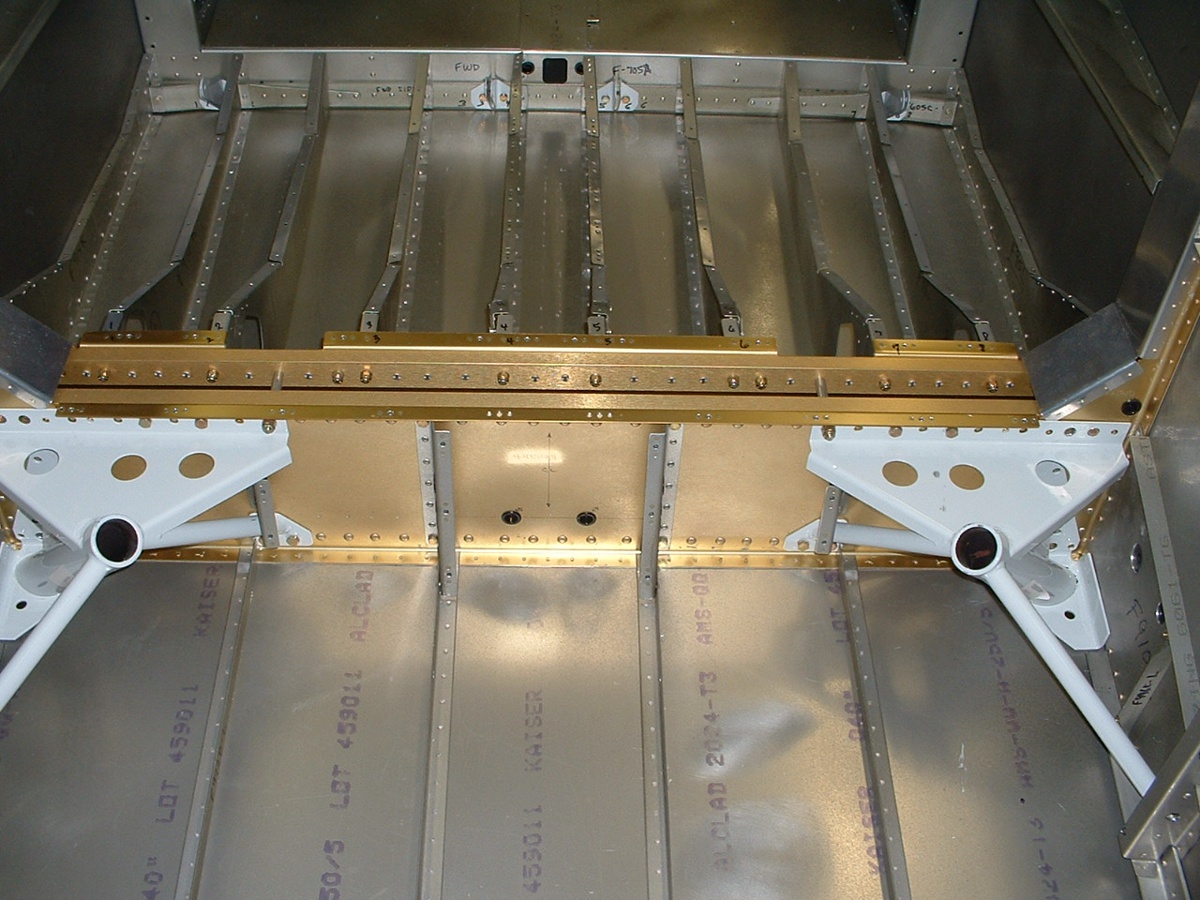 The above picture does not show it well, but there is another bulkhead there, with a 1  7/16" spacer in between them.  I had to put washers and nuts on the bolts that I put through the steel weldments in between the bulkheads.  There were three bolts down deep on each side that required a bit of skill to get in there.  How did I do it?  My hemostats were too short, so I improvised.  I took a coat hanger and bent a short right-angle bend at the end of the wire to put the washers on the bolts sticking through the main bulkheads.  Then I took a clothespin to hold the nut, while using a second custom-bent coat hanger wire to hold the clothespin in the correct position at the threaded end of the bolt.  Then I just turned the bolt with my ratchet wrench to get the nut started on the bolt. 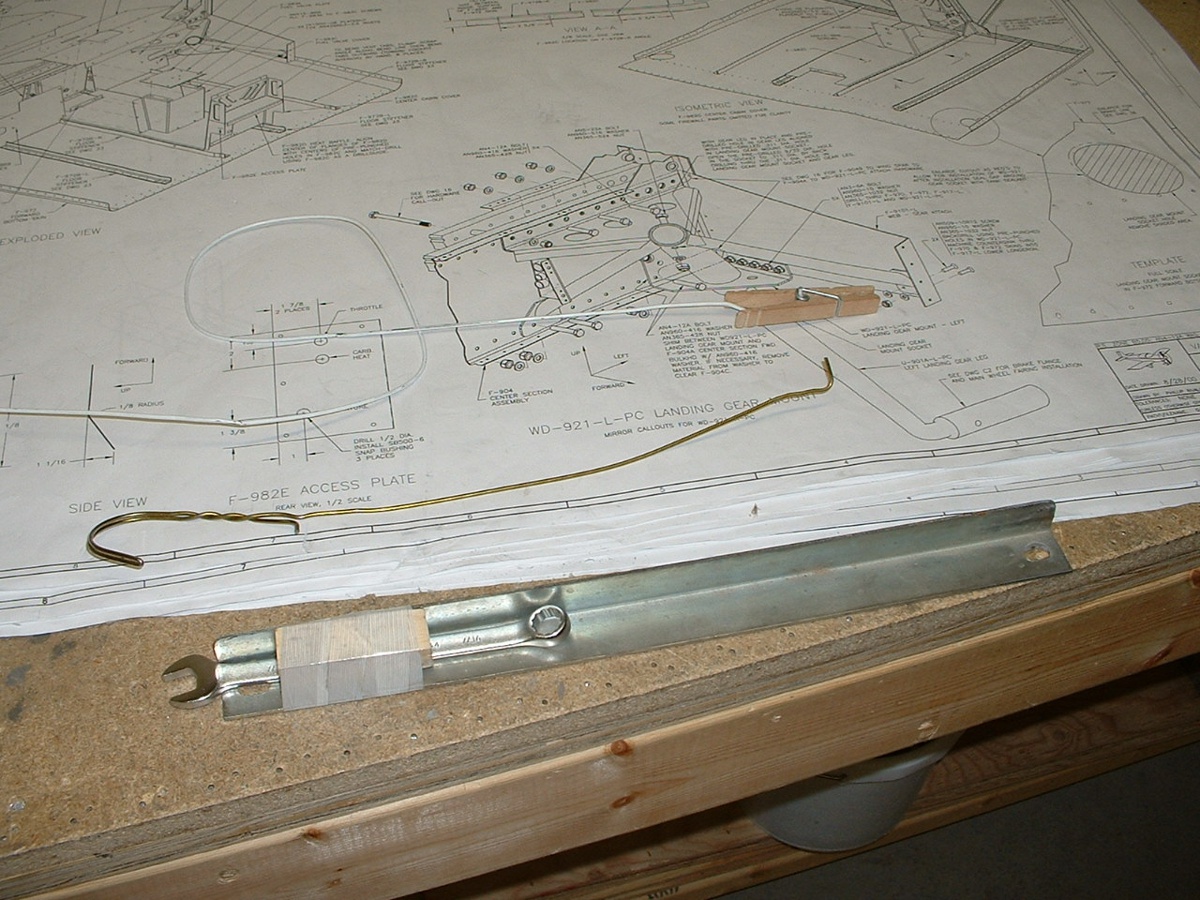 Once the nut was threaded onto the bolt, I needed a really long 7/16" wrench, so I used some glass filament tape, a small wooden block and a piece of steel angle to do the job of holding the nut when I tightened the bolts through the F904A wing spar bulkhead.  I decided to leave this picture a bit larger to show the details of my improvised tools.  You can see on the print that I still have more bolts to put in tomorrow, but those are at the top of the bulkhead and along the side wall and are easy to put in place.