July 20, 2019: The World's largest exposed piece of granite rock is about 14 miles East of downtown Atlanta.  Linda did not get a chance to go there on her previous trip to Atlanta to visit her daughter.  We discussed this subject as we were leaving Madison, Georgia to get on Interstate 20 heading toward Atlanta.  The town of Stone Mountain, Georgia is located near the west gate to Stone Mountain Park, which is owned by the State of Georgia, and is not a US National Park as it honors heroes of the Confederacy. 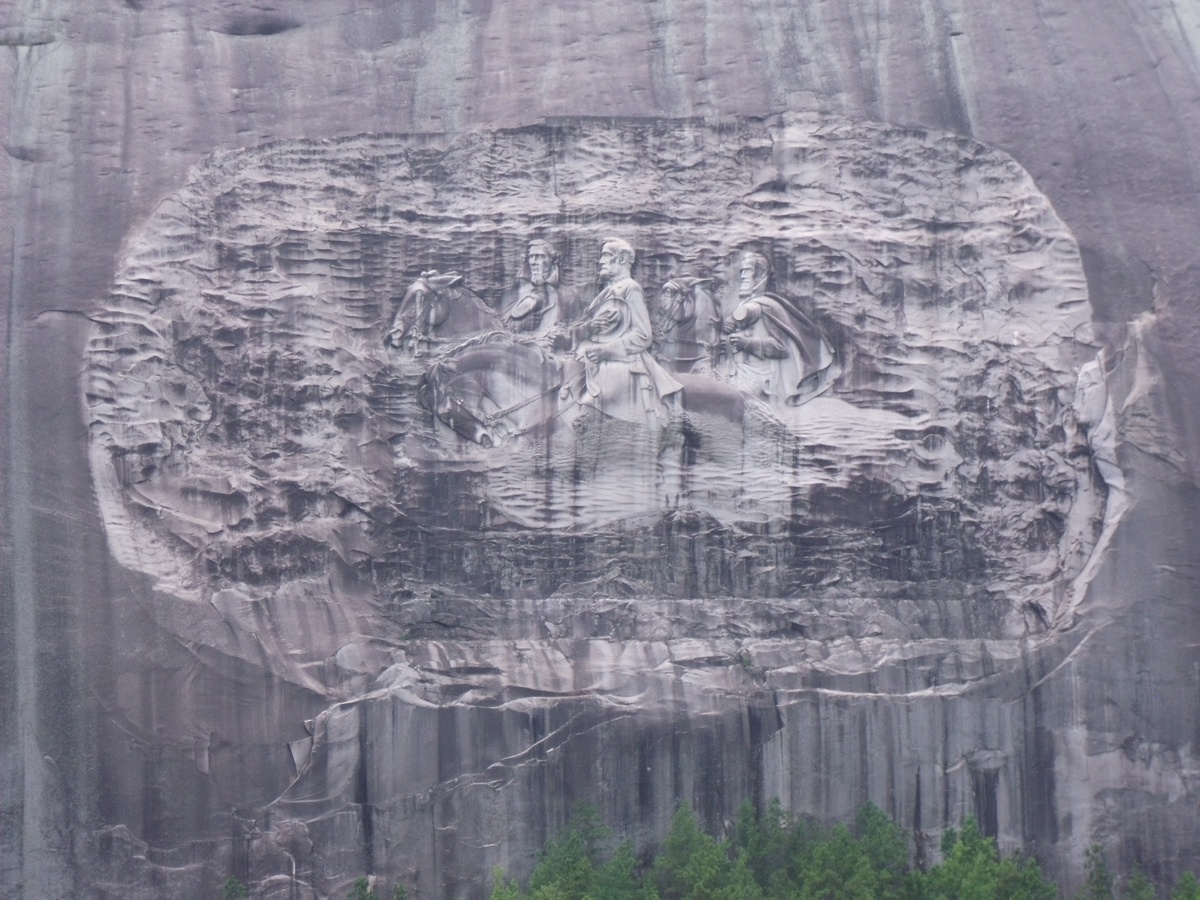 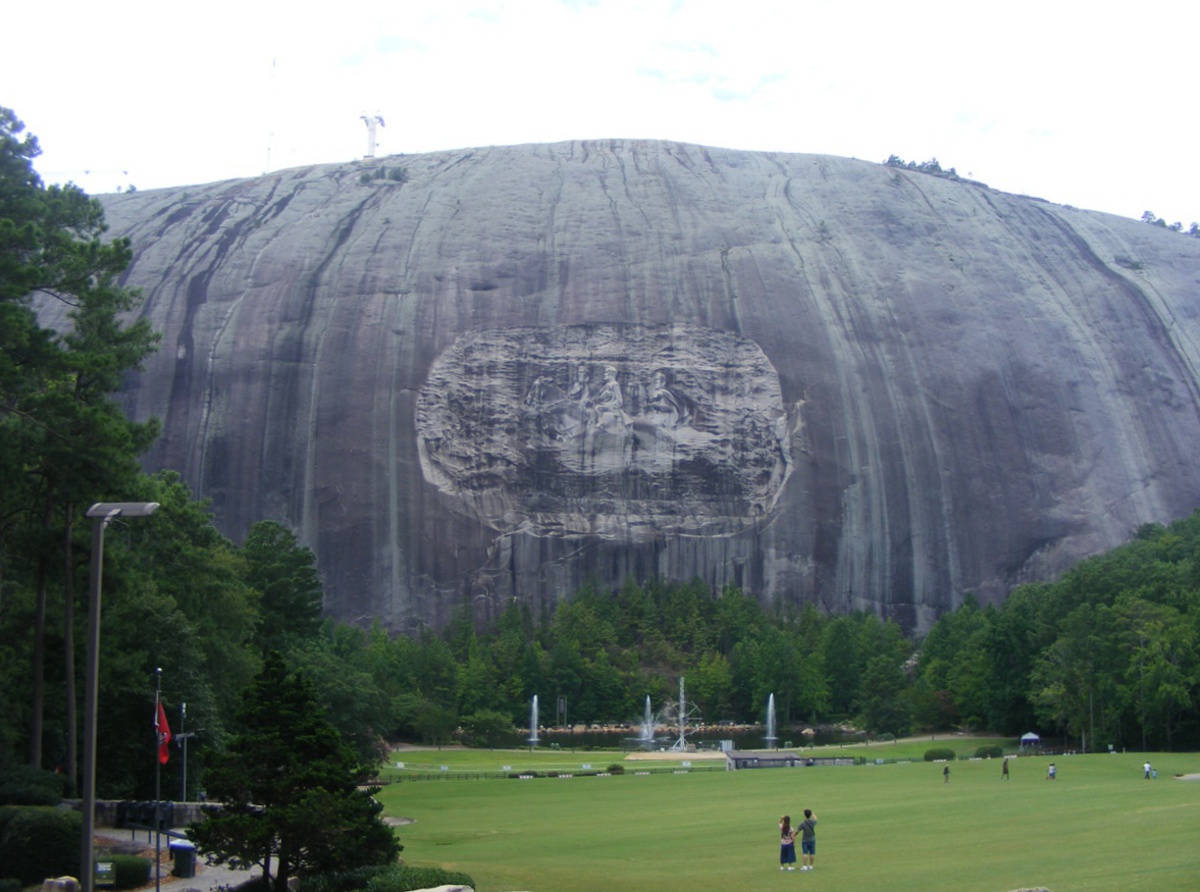 This bright RED CARDINAL was perched on a stone as we walked from the main building down to the train station for a ride around the mountain. 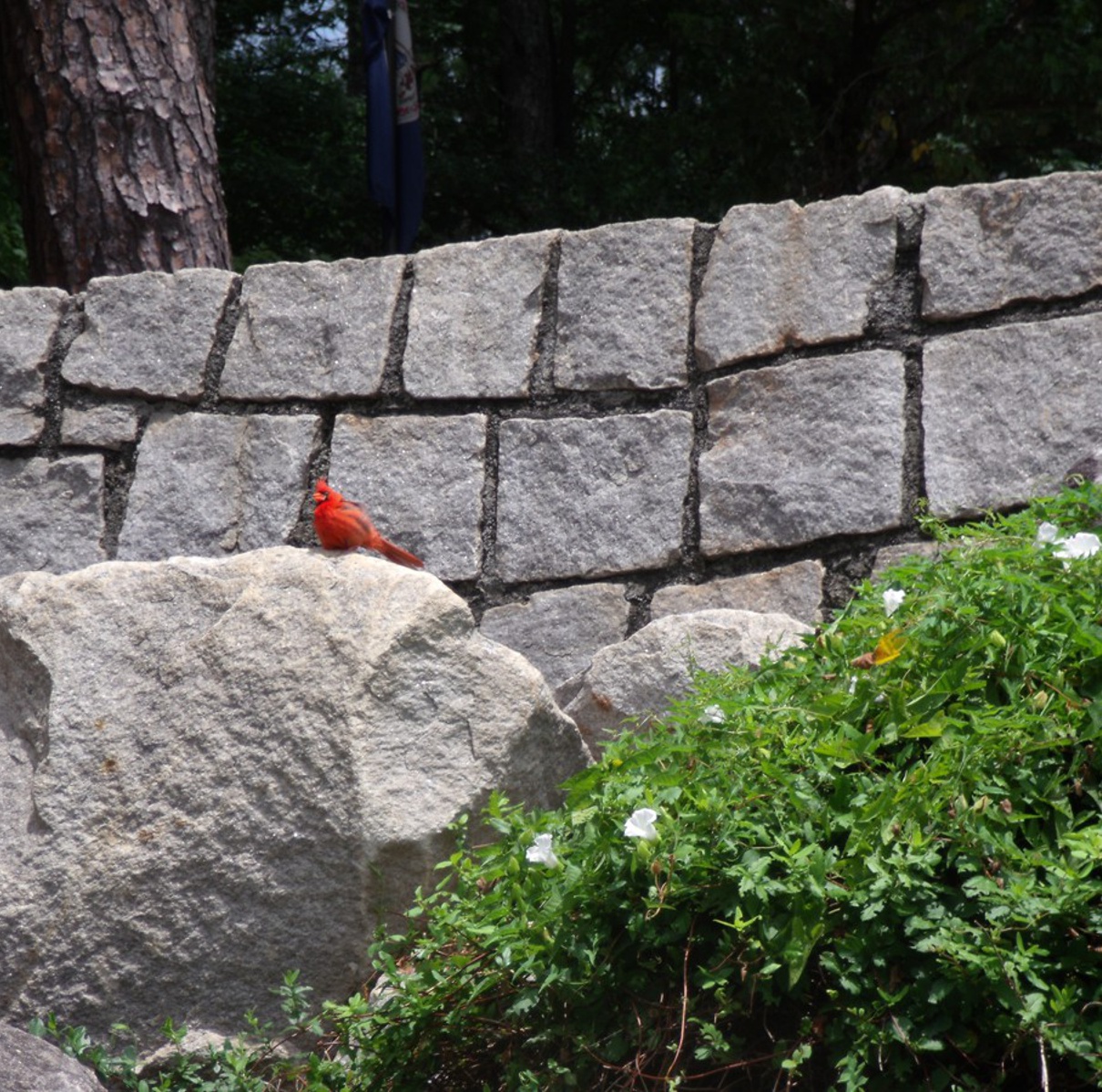 Around on the back side of the mountain are a few buildings that serve as a place for some comedy when the train stops and a few actors perform for the people on the train. 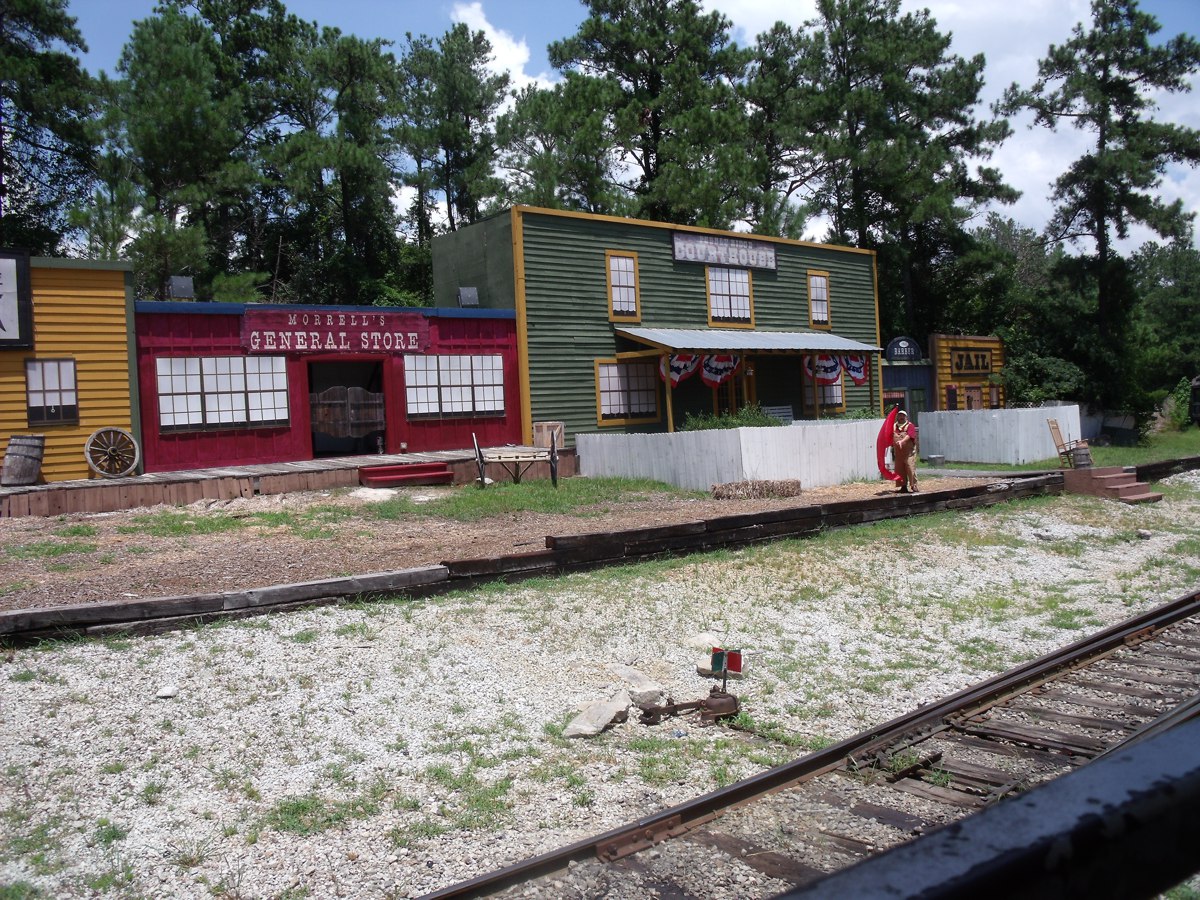 The carving on the mountain comes into view as the train approaches the station.  Night time fireworks are sent up from the area just in front of the mountain.  The fence is there to keep the crowd at a safe distance. 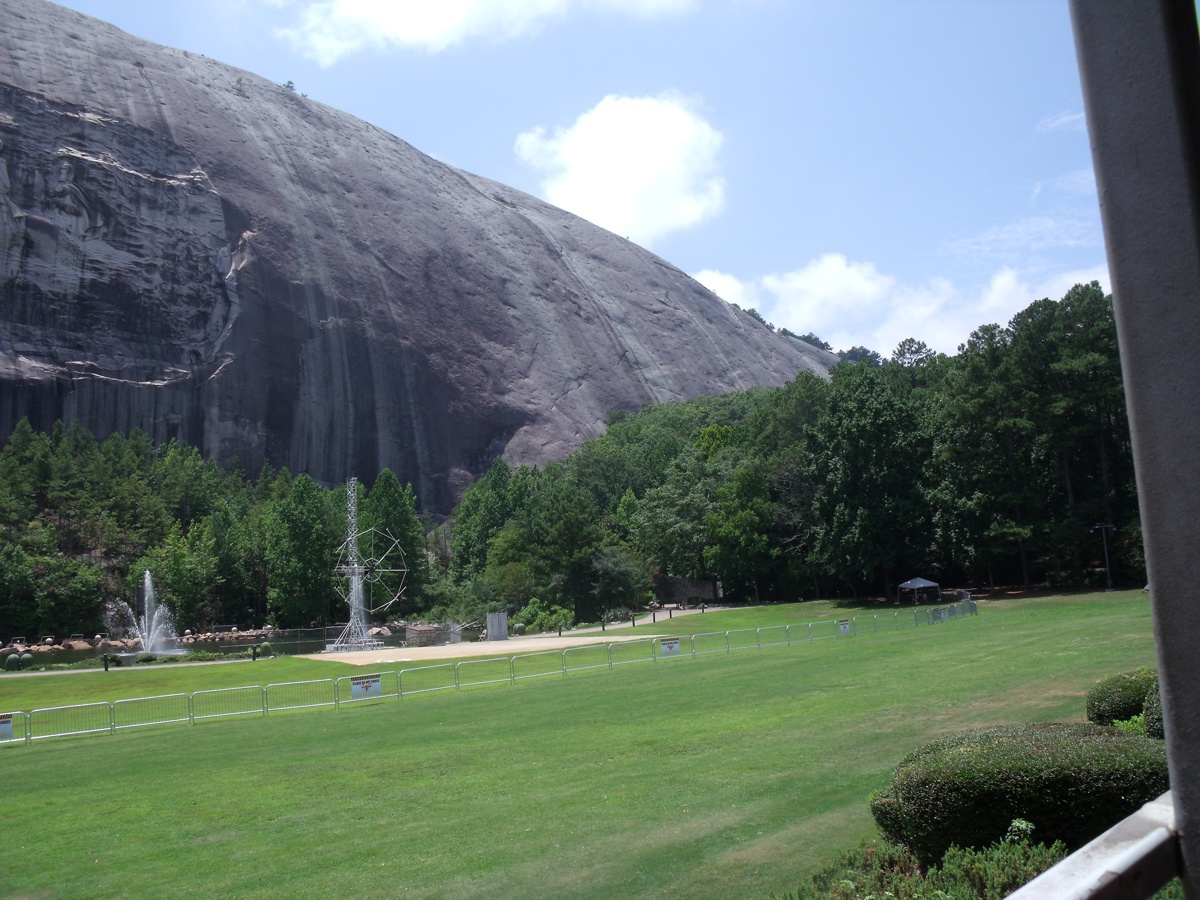 One of the most amazing things about Google Earth is the ability to look at any point on the planet from any angle.  This view at the top of Stone Mountain shows the upper end of the cable car lift and a visitor's building with a broadcast tower on the East side of the buildings.  The highest point on the mountain is 1,681 feet above sea level.  The lake that surrounds the mountain on three sides is 834 feet above sea level. 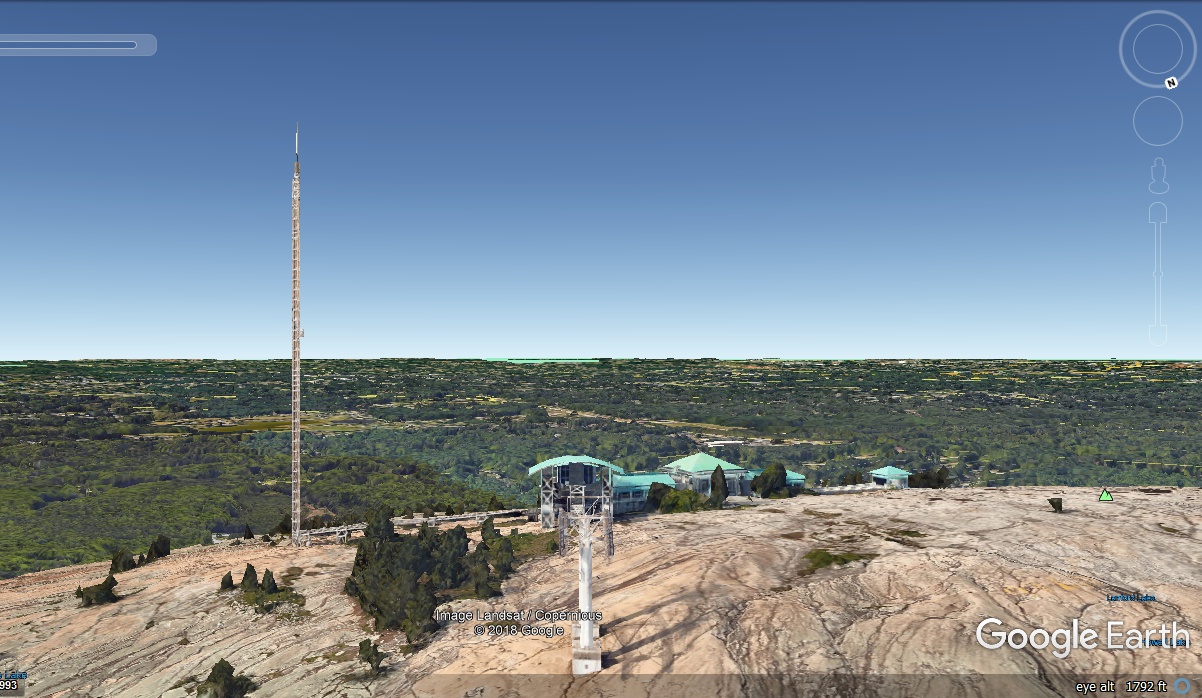 We departed Stone Mountain Park at 2:11 PM and drove toward Kennesaw, Georgia to see a piece of history as you shall see on the next page.  Along the way, I drove through the campus of "Southern Technical Institute" a.k.a. "Southern Tech" where I was a student in the mid-1960's to get my degree in electrical engineering.  A number of our professors taught electrical engineering classes at Georgia Tech in Atlanta, and at our campus in Marietta,.  They have changed the name of Southern Tech over the years because of the University System of Georgia allocating resources, both financial and human resources.  This Wikipedia article provides the details and the following image of "THE ROCK" on the campus assaulted and momentarily claimed by the various Greek fraternities on campus.  The paint on it would magically change overnight.  An occasional bonfire would remove the older layers of paint to make way for fresh coats of paint.  The first time it was ever CHISELED with Greek letters was when I was a student there.  The NEXT time a fraternity wanted to paint the rock, they first had to fill in the chisel markings with concrete. This view is looking north and those trees back there were NOT there in 1965.

This is DORM ONE as it was known to all who lived there over the years.  One of my rooms there was 301 on the top floor.  I had lived in room 110 early in my time with Southern Tech.  The bottom floor had the cafeteria and the common room where I watched the first episodes of STAR TREK in the fall of 1965.  Room 301 is on the top floor at the LEFT end (East) in this photo, but is located on the opposite side of the building facing south looking at, you may have guessed by now, DORM 2. 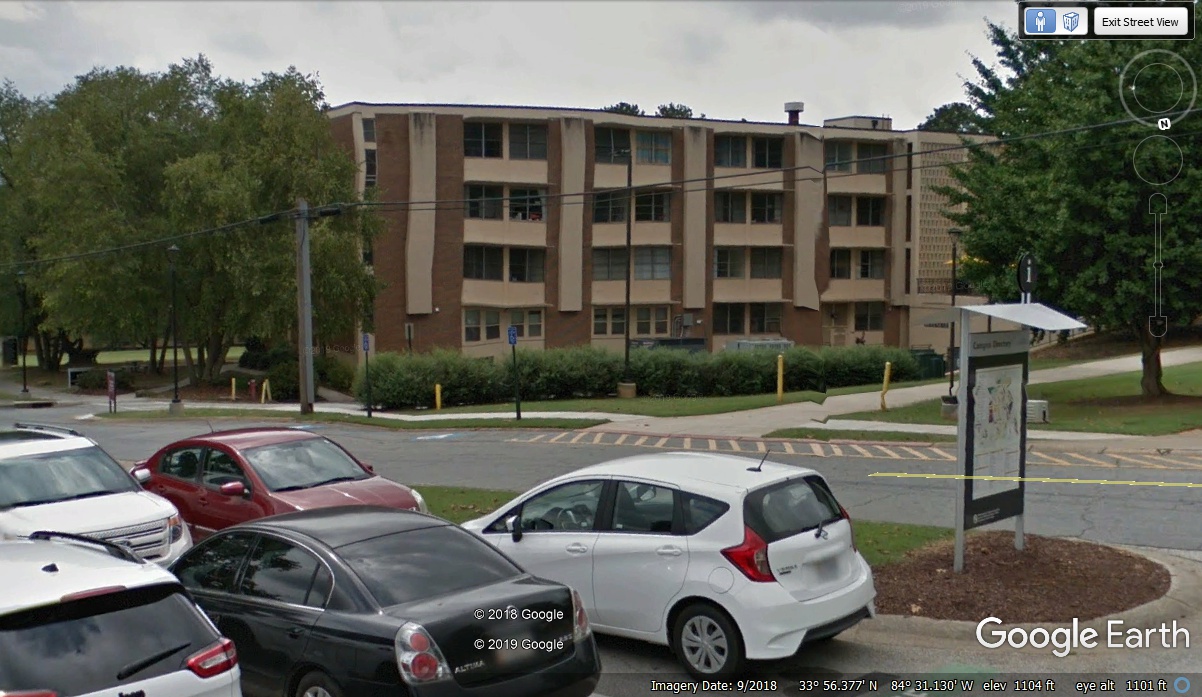 Here is an image of the south face of DORM ONE, also known as the Norton Dormitory for an administrator who worked there during my time as a student. 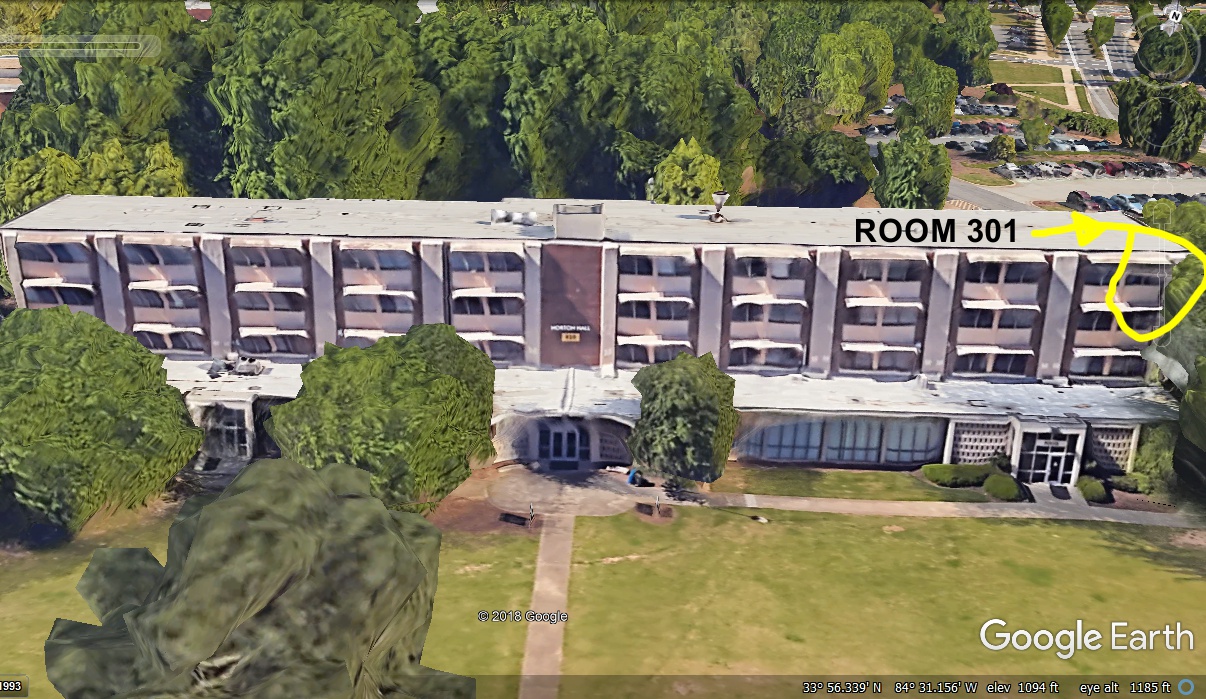 The Southern Tech campus is outlined below.  There are many more dormitories and other housing on the campus today. 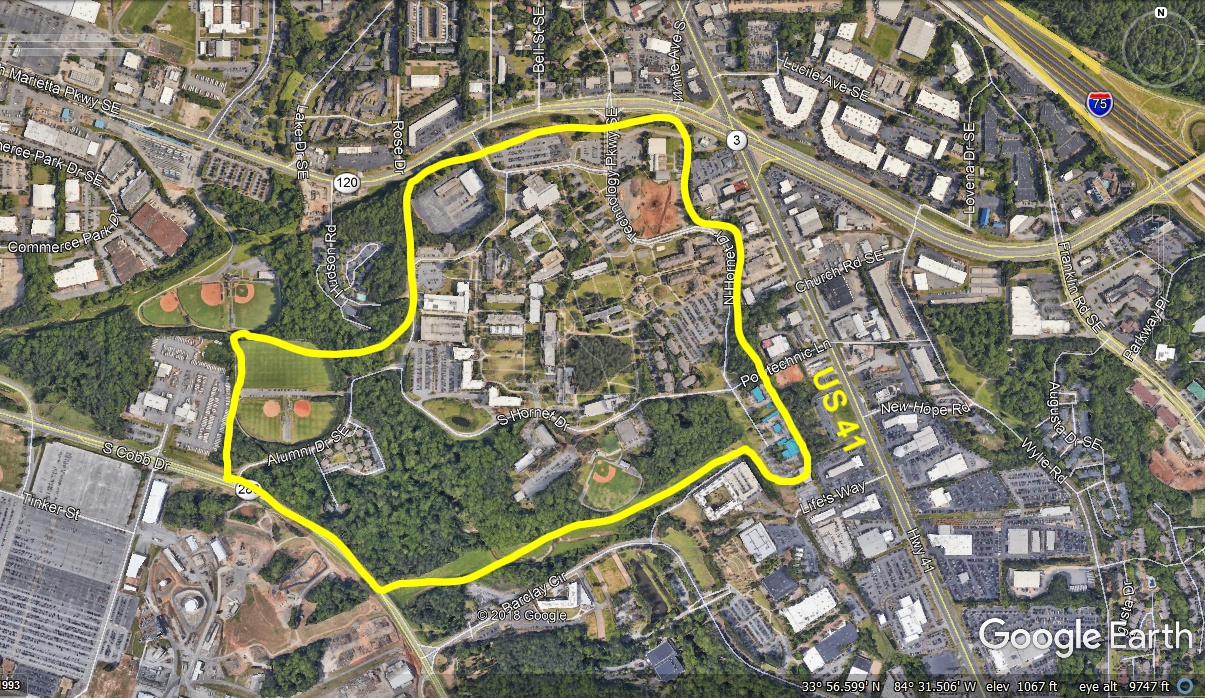 Here is an image showing all ELEVEN dormitories on the campus in 2018.  A lot has changed since 1965. 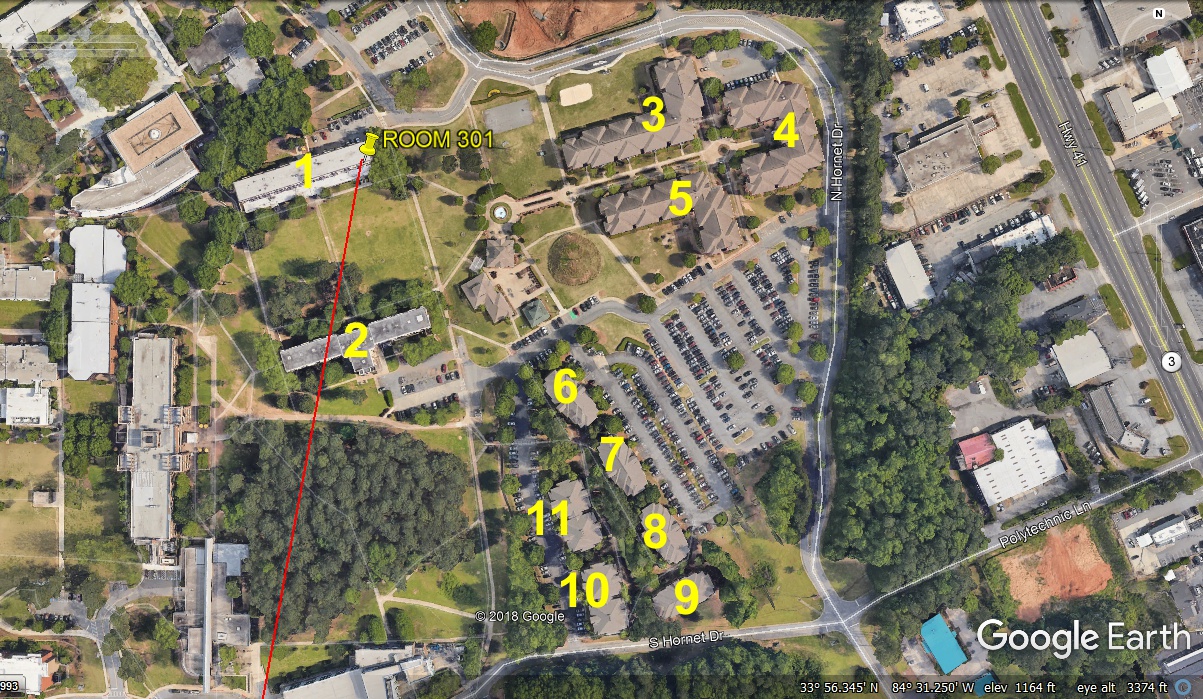 One thing I would see almost every day were the NEW aircraft built by Lockheed taking off from their plant co-located with Dobbins Air Force Base.  In the 1960's, Lockheed had not been merged with Martin-Marietta to become the defense contractor company known today as Lockheed-Martin.  That RED line is the "measuring stick" used in Google Earth to determine distance from any two places on the planet.  This measurement is just about 1.5 miles from my old dorm room to the runway at Dobbins Air Force base.  I would see brand new C-141 jet cargo aircraft, and the still popular C-130 Hercules turbo prop cargo planes taking off from the runway seen below. 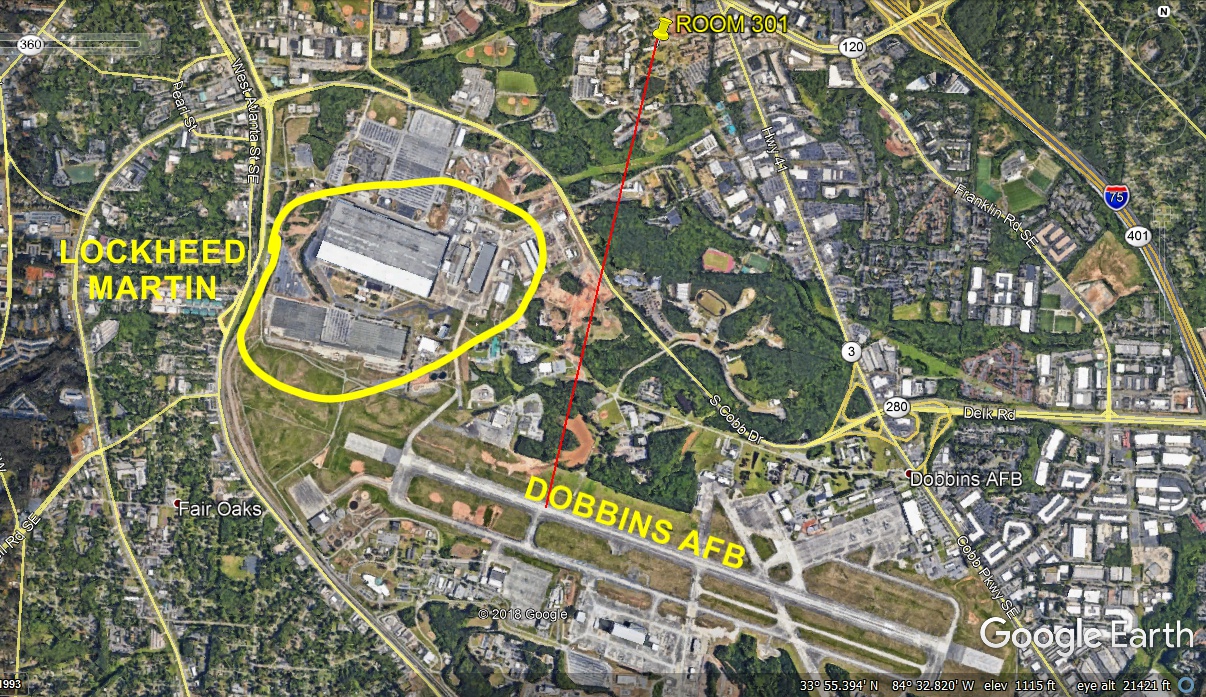 We drove through downtown Marietta, Georgia using the older Georgia 3 and US 41 highways as they existed before the 1950 era of new four-lane highways that predate the interstate highway system that began in the 1960's. This online story is about building the four-lane sections of US 41 from the first section in Marietta in 1938 to the completion of all four-lane sections by the end of 1955.  This is the view of the older highway as it enters the Kennesaw Mountain National Battlefield today. 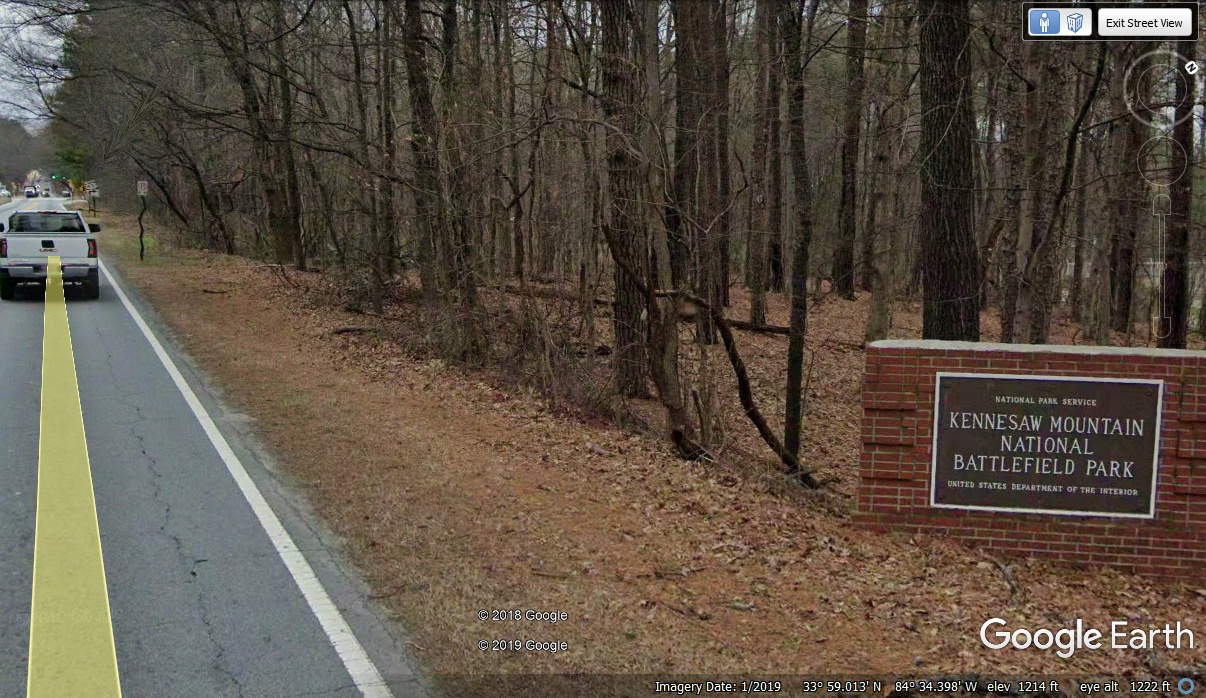 This US 41 sign is a reminder of the four-lane highway running somewhat parallel to this highway from the 1950's. 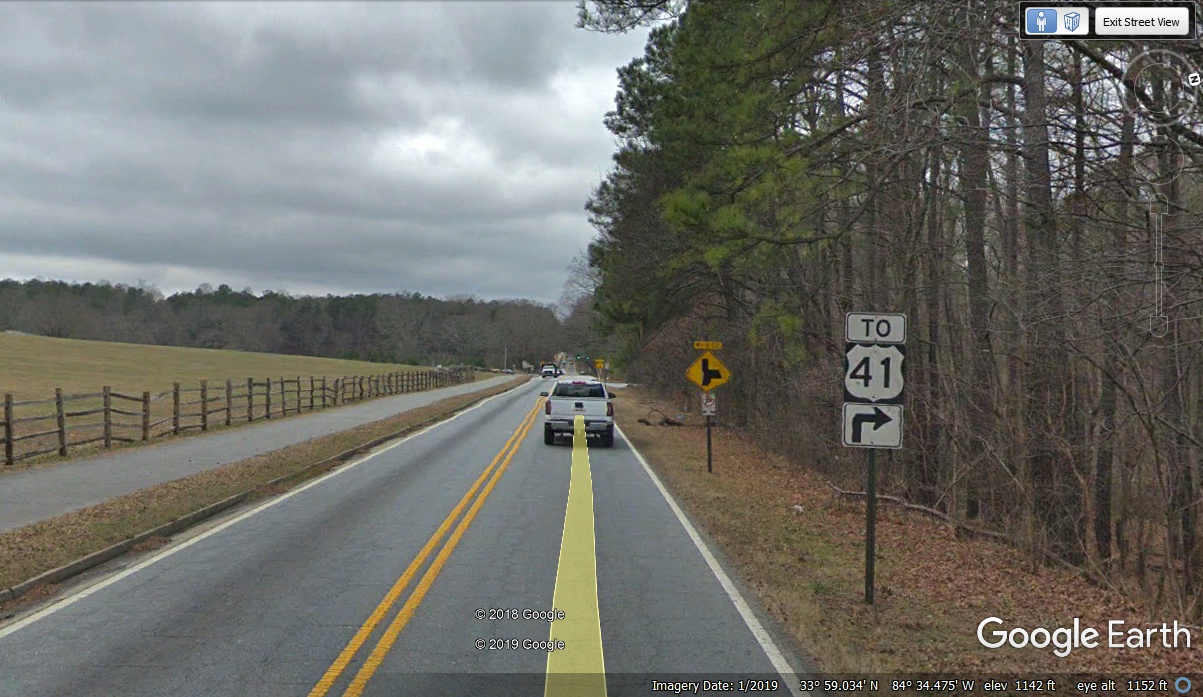 Be sure to stop at the Visitor Center for information on the battle that was part of the Union Army Atlanta Campaign. 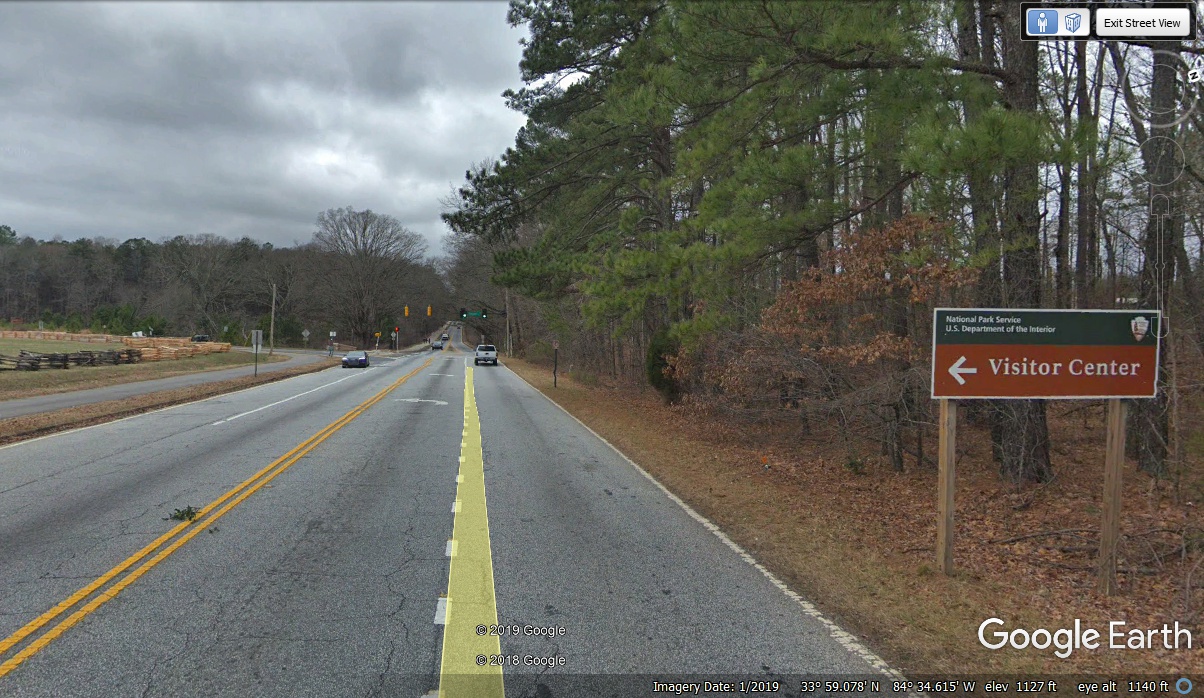 Here is a view of the mountain as seen when driving through the park. 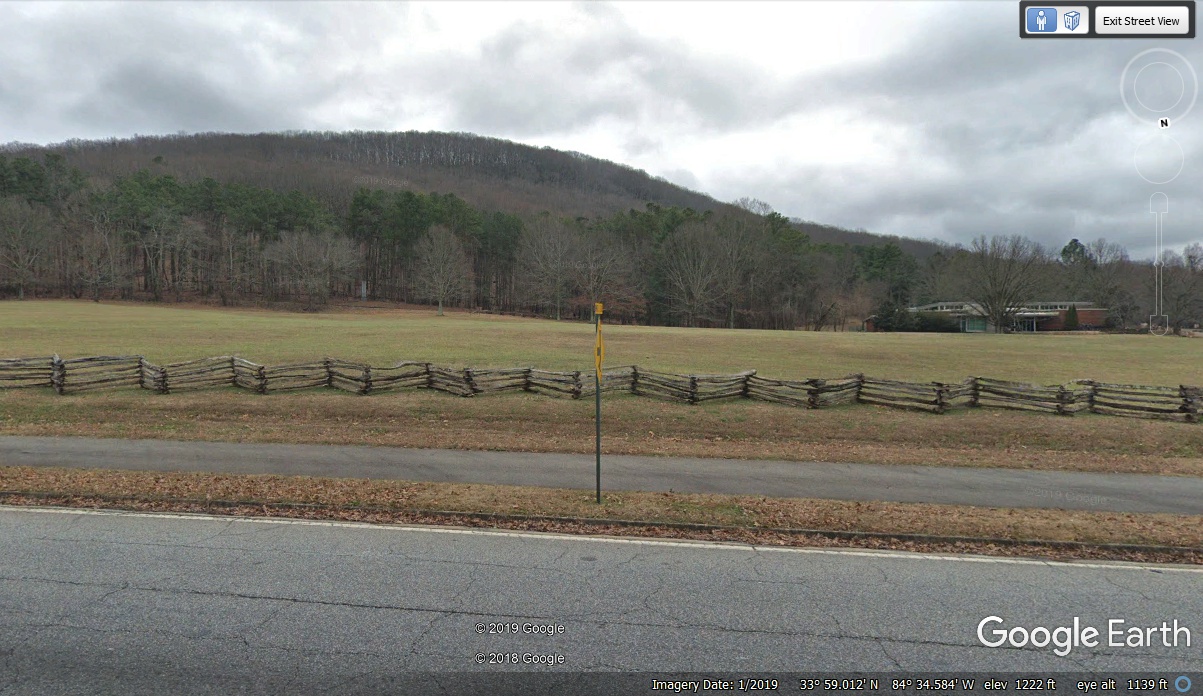 This Google Earth view shows Kennesaw Mountain to the south of the town of Kennesaw. 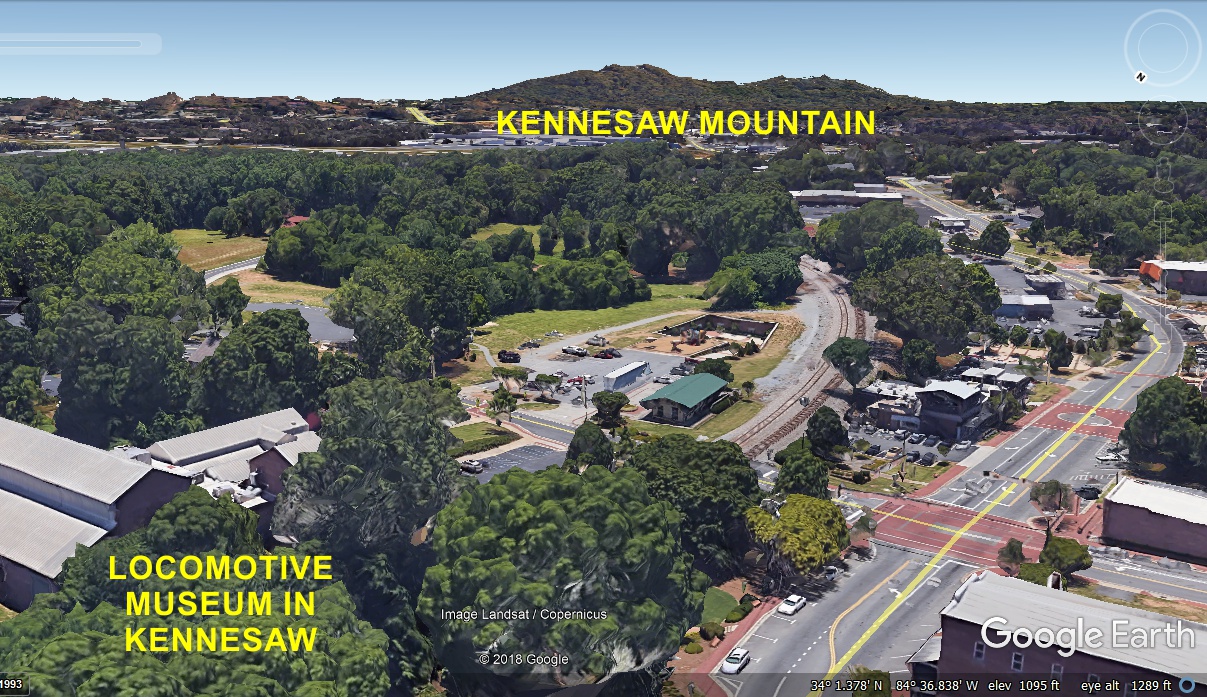 The distance from Kennesaw Mountain to the Railroad Museum in the town of Kennesaw is just under 3.9 miles.  That airport below is McCollum Field serving general aviation flights for the town of Kennesaw and Cobb County.  I landed here going and coming from the solar eclipse on August 21, 2017.  My son went with me for that big celestial event that day.  This Google Earth image below is how it would look if you were in an airplane at 40,349 feet. 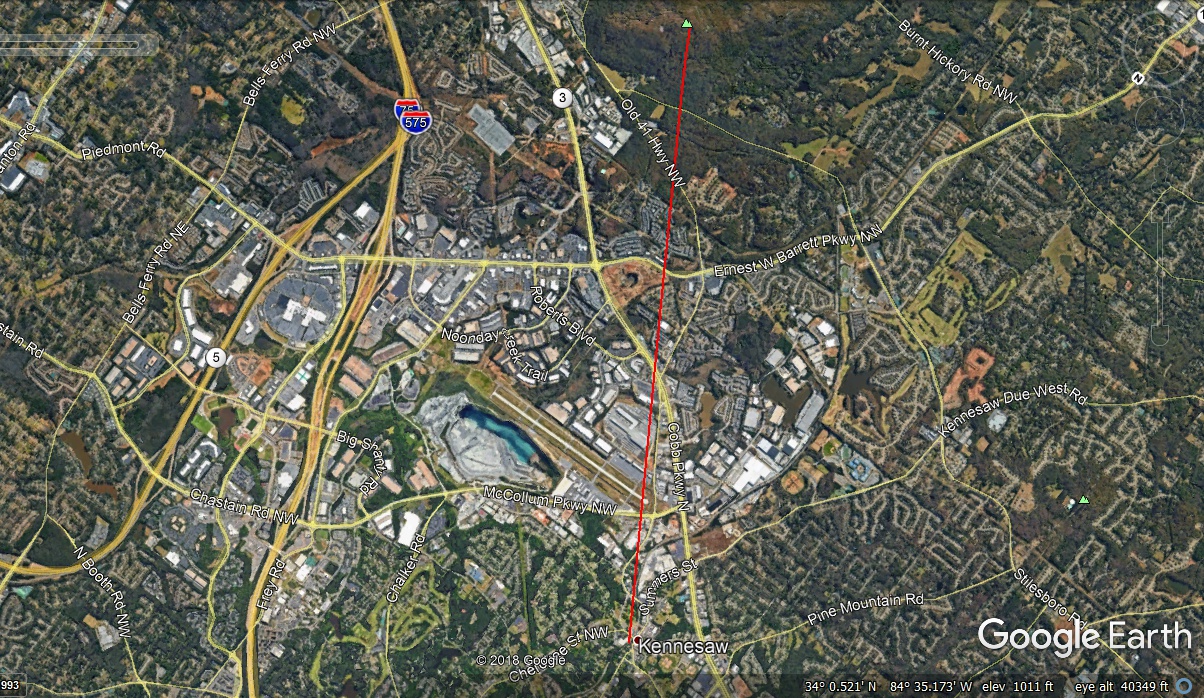