June 27, 2020:  Today was a VFR day that varied with altitude and location.  I took off from the Rockledge Airport and looked in all directions when I climbed up to about 1,700 feet.  I decided it would be best if I went south on the west side of I-95 away from the Melbourne Class D air space.  I took a couple of photos of the new intersection with I-95 that is near the Melbourne Airport.  I-95 crosses over US 192 then makes a left turn heading southeast. 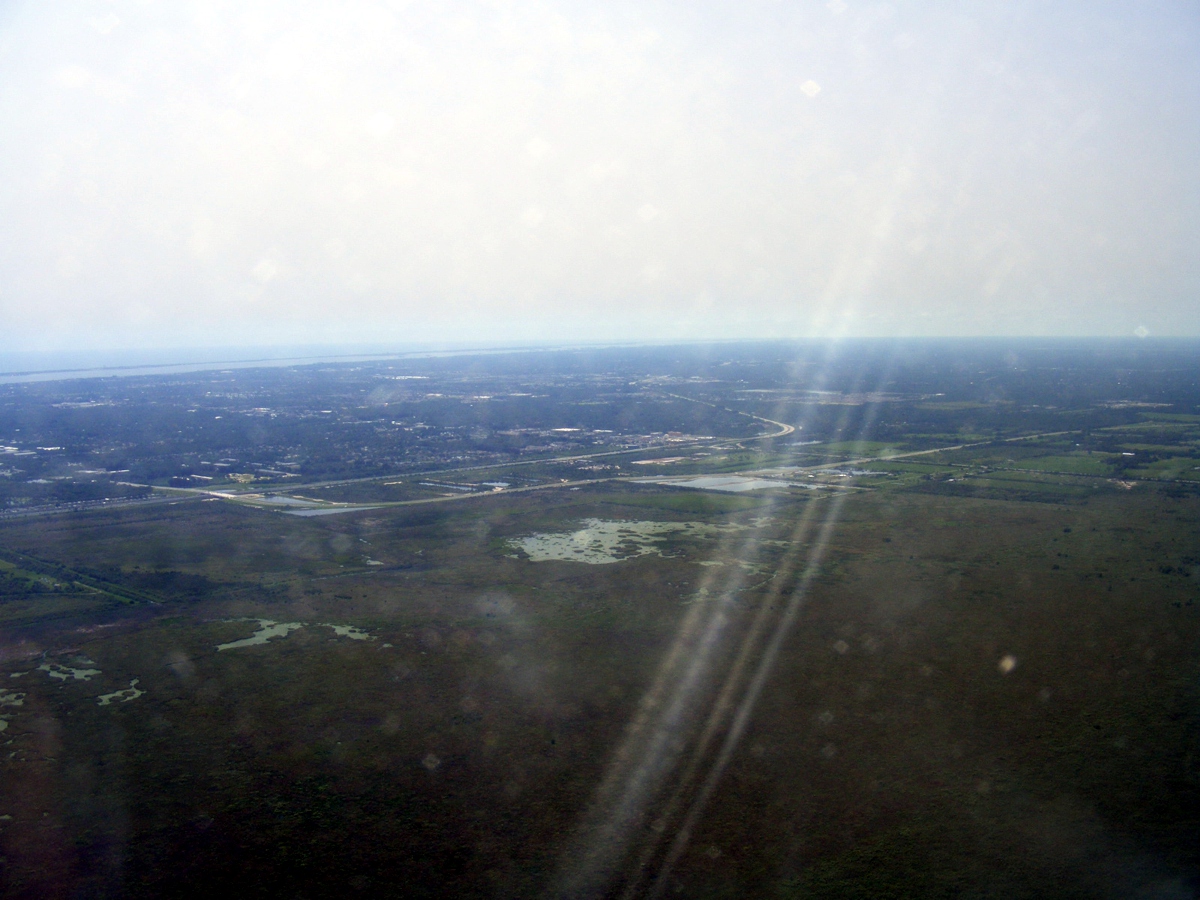 That hazy "FOG" is the result of the dust from the Sahara Desert after crossing the Atlantic Ocean and coming ashore here in the Melbourne, Florida area. 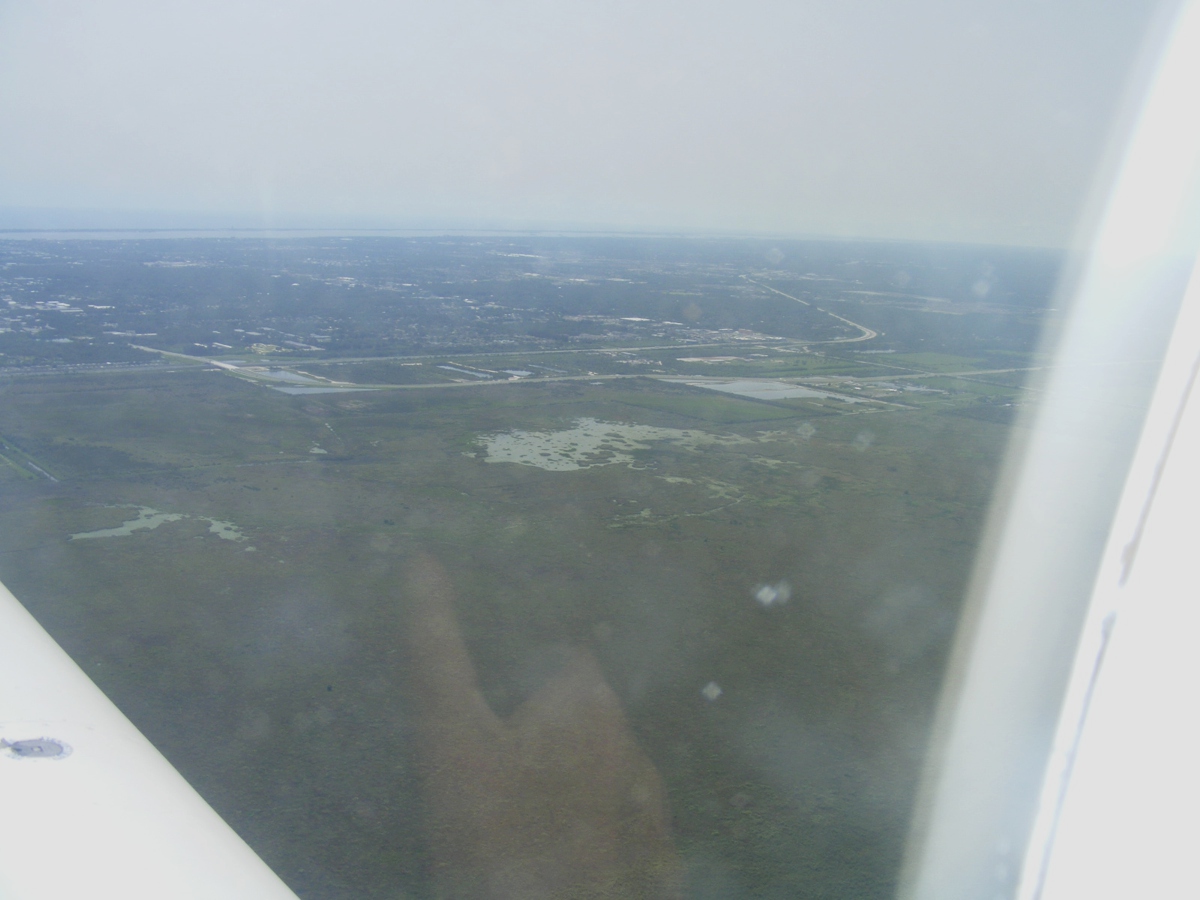 The new road connects to northbound Saint Johns Heritage Parkway at US 192, then goes a bit further north then turns to Ellis Road on the other side of I-95 going East toward the Melbourne Airport.  This image has been processed to get more contrast.  The contrast brought out more detail of my hand on the joy stick in the reflection from the inside of the canopy. 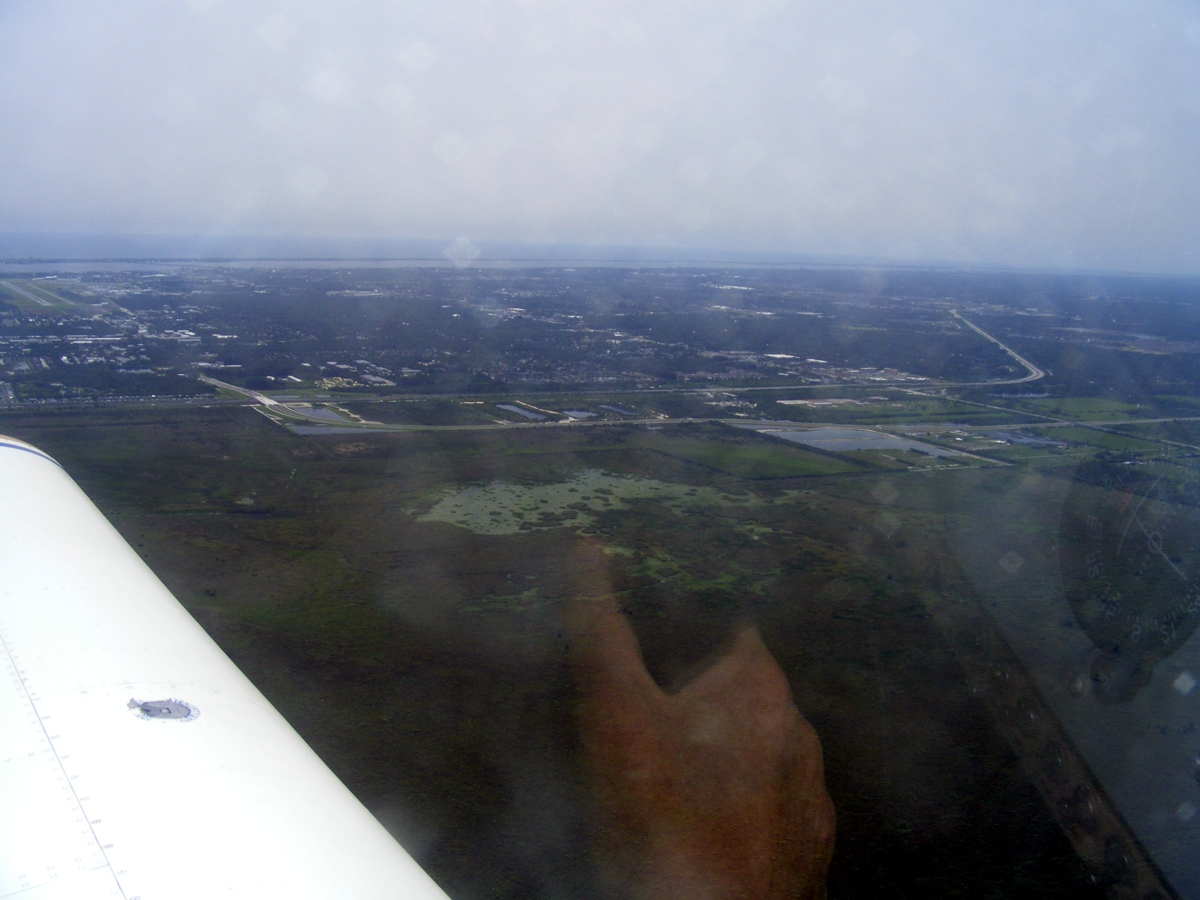 This Google Earth image from July 2019 shows the Ellis Road extension under construction at this intersection with US 192 about half a mile west from the junction of I-95. 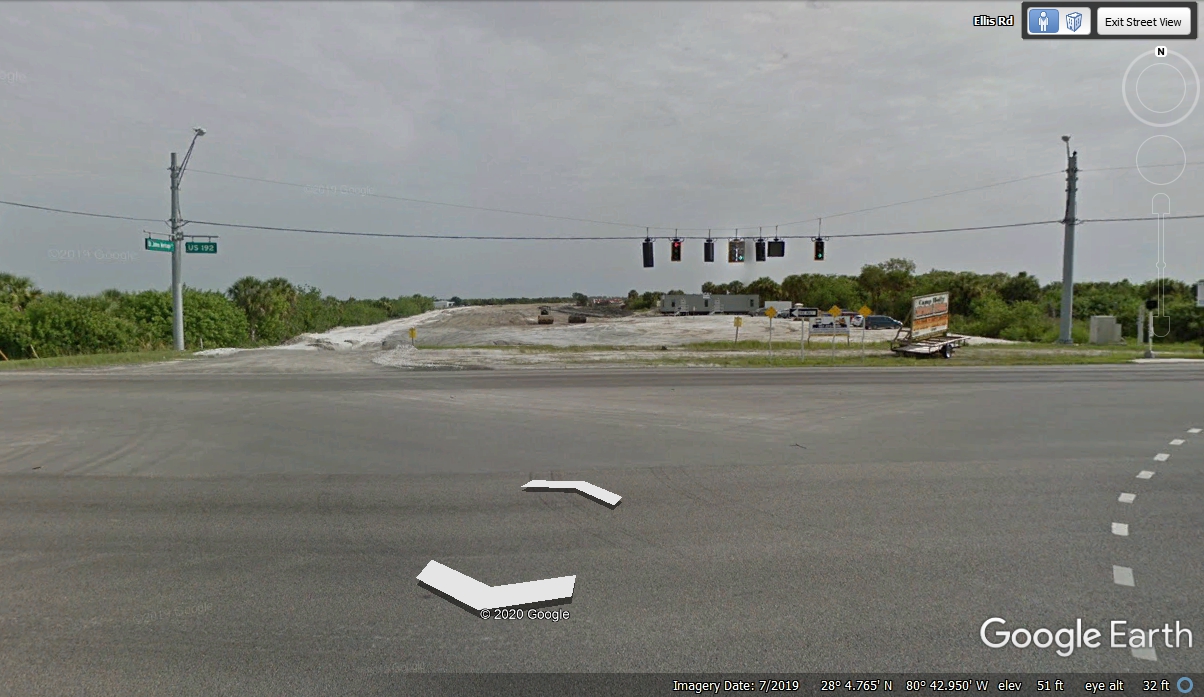 Here is the view from US 192 looking south on Saint Johns Heritage Parkway. 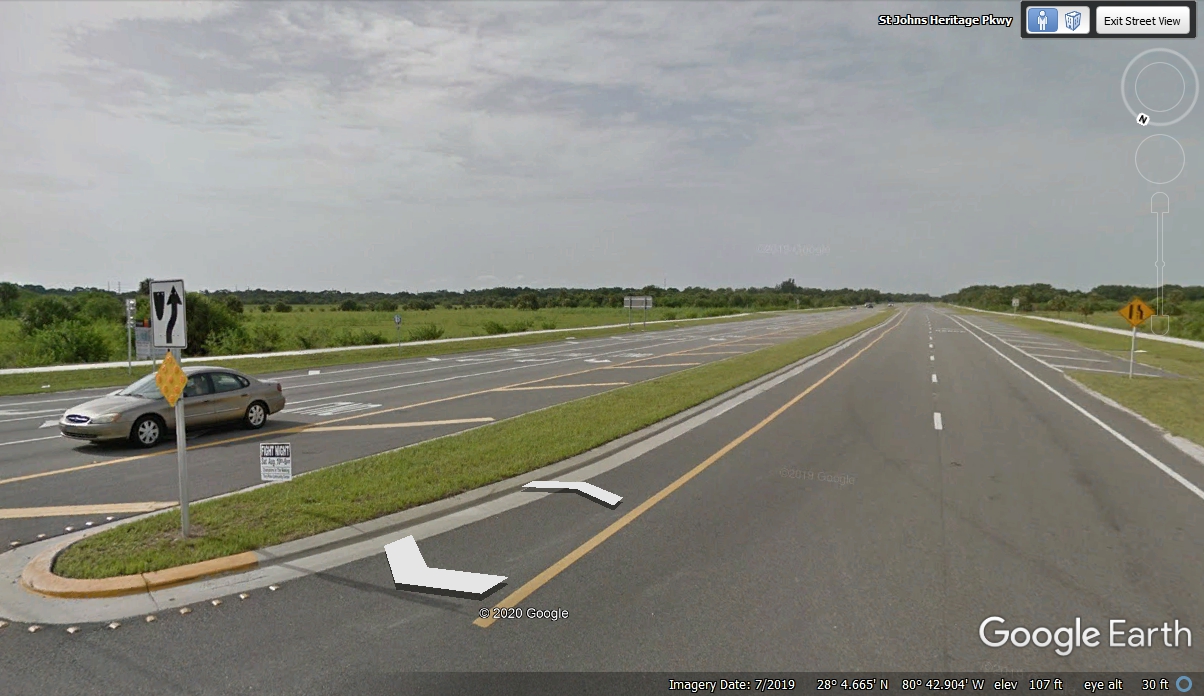 Here is the last image from the air in this area with the original Ellis Road visible almost even with my left wing tip.  The new bridge over I-95 is the white rectangle beyond the curve in the road.  The runway NINE RIGHT (9R) at the Melbourne Airport is lined up with my camera angle. The center of the airport is SIX MILES from my flight path as I am outside their Class D air space flying at around 1,700 feet. 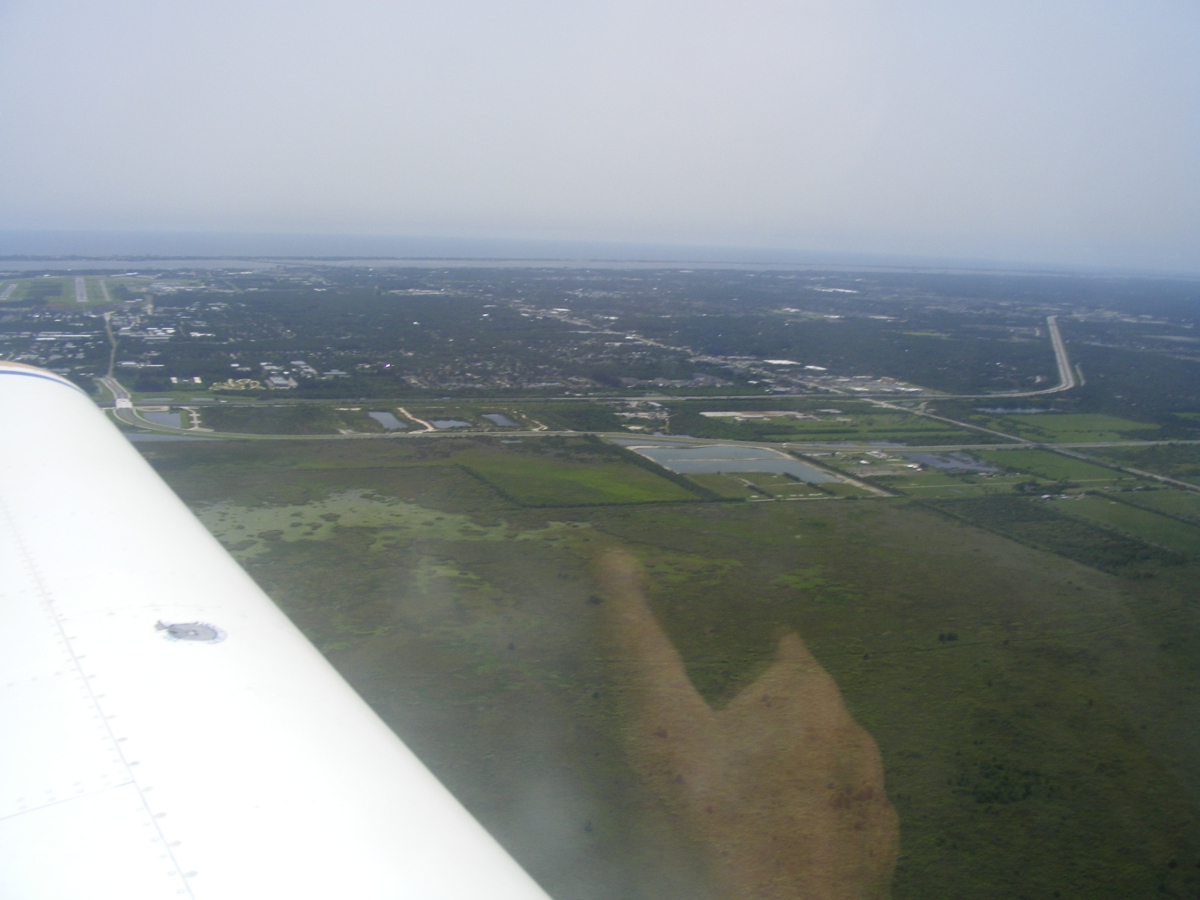 Here is my GPS flight path for today along with my GPS path in my car to the Rockledge airport from the Kissimmee area.  The flying today took me from Rockledge down the west side of Melbourne Airport down to the Valkaria Airport for a touch and go landing.  From there, the path was north over the top of the Melbourne Airport and over Rockledge going north past the Indian River lagoon.  I followed the usual path westward and north of the Orlando Class B air space and past the south end of the R-2910B restricted military airspace for the bombing and gunnery range in the Ocala National Forest. 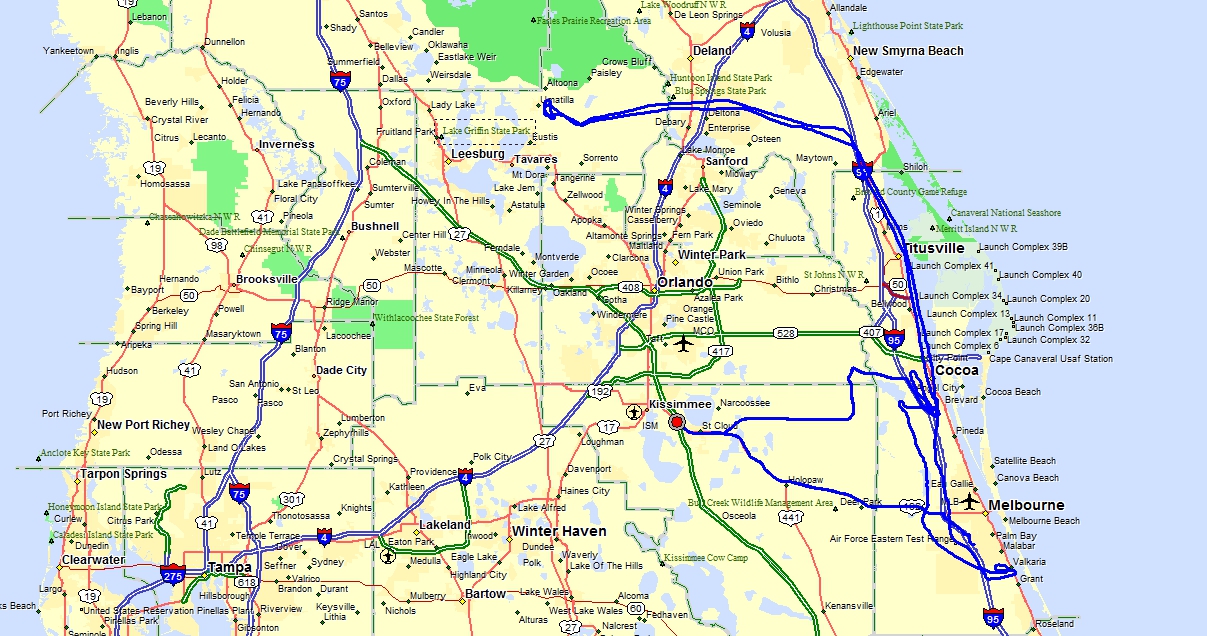 Here is the view looking East and heading into the area of the Valkaria Airport from the west.  I flew around the south side of the airport and above the pattern before entering the downwind leg to share the air space with another local aircraft.  The picture was taken at 11:43 AM. 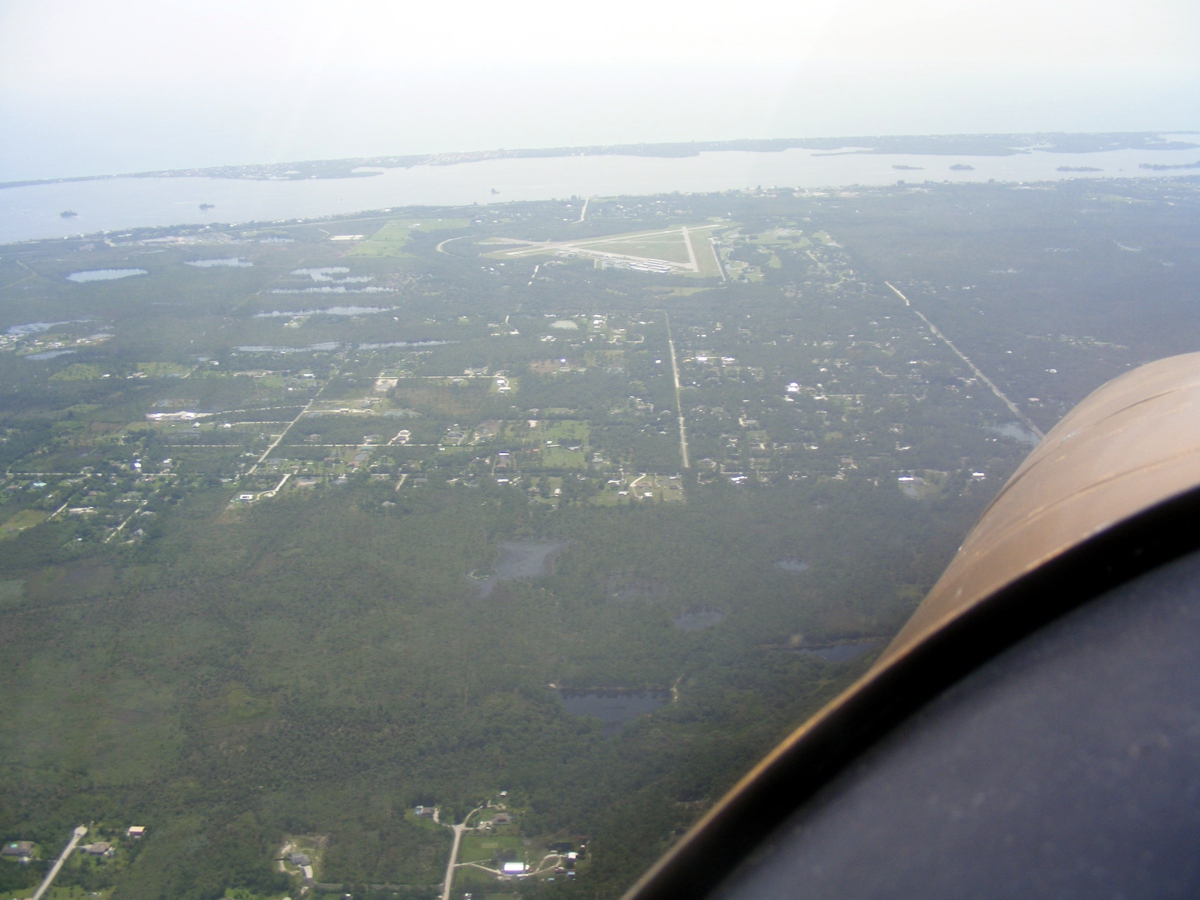 This next photo was taken at 12:10 PM looking down at Titusville, Florida from above 8,500 feet MSL.  This is the raw photo showing the haze from the Sahara Desert "dust". 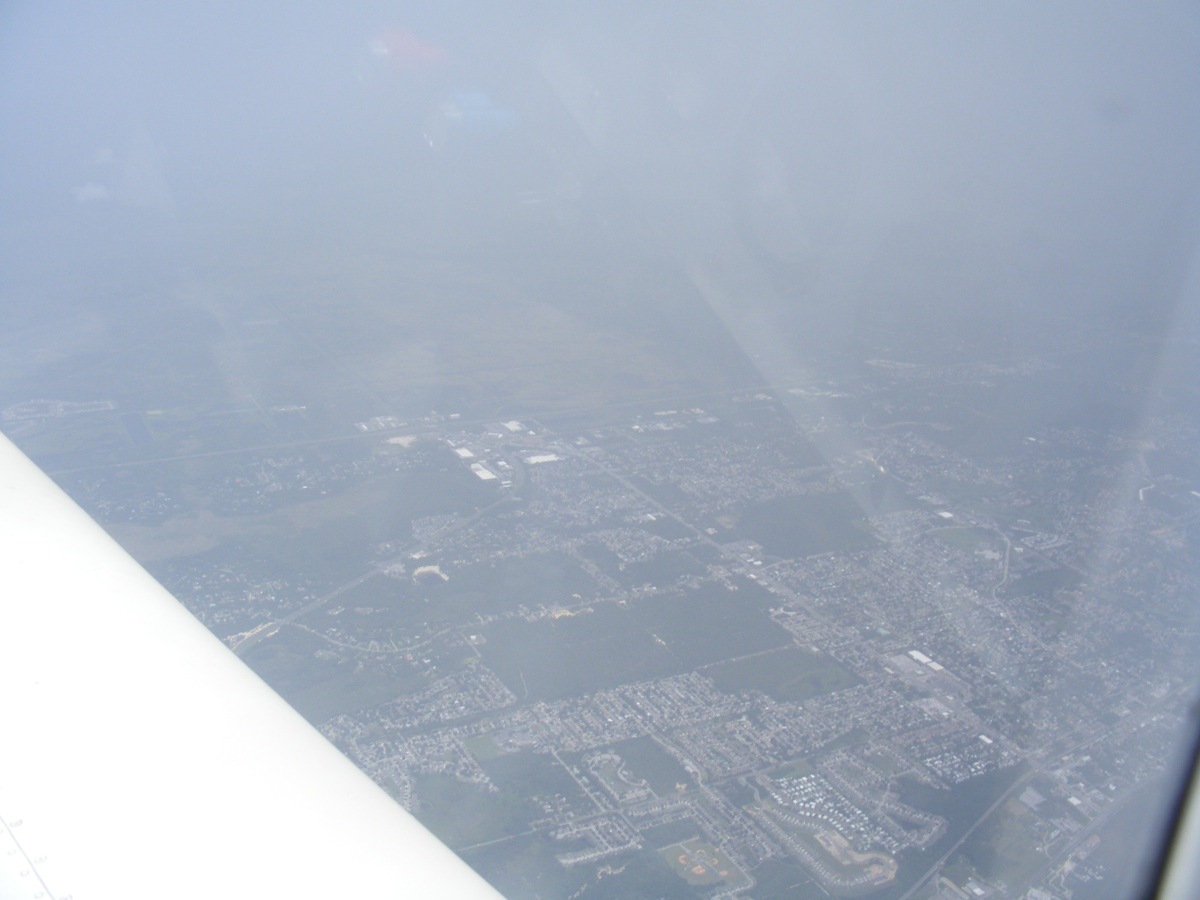 Here is the same photo after some digital processing to "cut through" some of the haze below.  The reflection of my RED fuel mixture knob and the BLUE propeller control was also enhanced.  US Highway 1 and part of the Indian River are at the bottom right corner of both images. 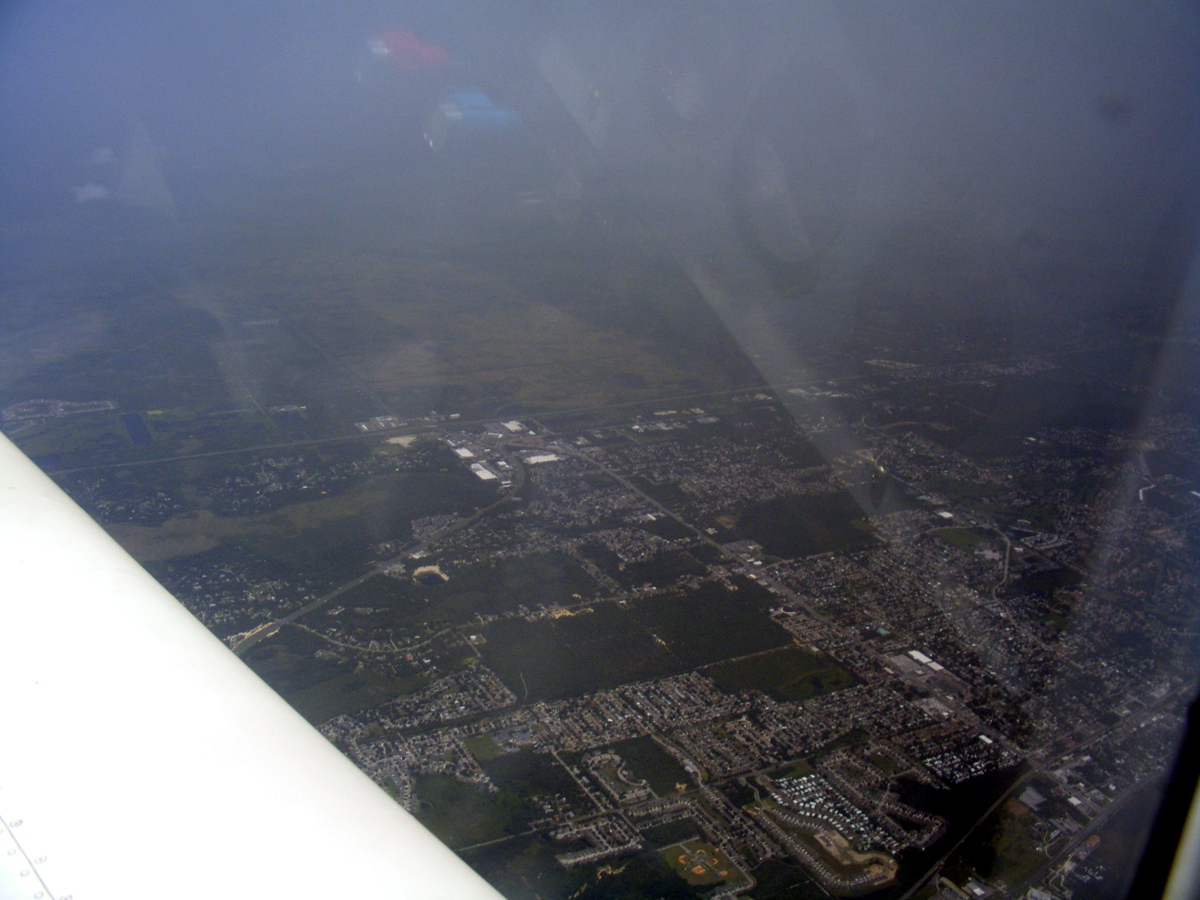 This image was taken just four minutes later at 12:14 PM from just above the haze looking north.  The clear air above was inviting for a long cross-county flight, but not for today as I have a GPS flight plan to take me to the Umatilla Airport to get fuel. 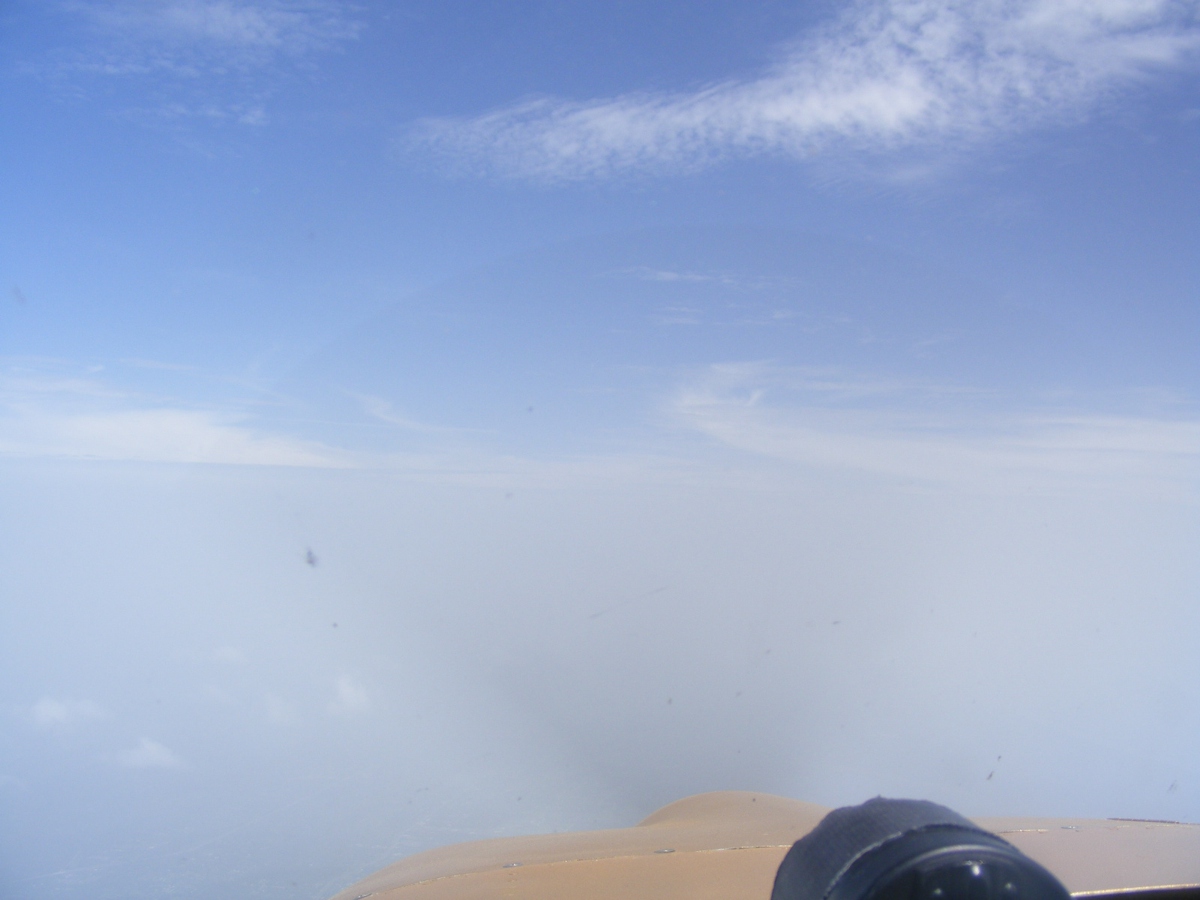 Engine stop and GPS OFF at the fuel pump was at 12:48 PM.  This photo was taken at 1:06 PM as I was preparing to depart with full fuel aboard.  The first GPS data point after engine start was at 1:09 PM.  The Dynon D-10A reported 34 degrees C (93 F) on the ground as I headed back to the runway.  Needless to say the takeoff roll was longer due to full fuel and the high temperature.  I got an oil temperature alarm right after takeoff as I was turning toward the waypoint I created between the end of the R-2910 restricted air space and the Orlando Class B just a few miles southeast of the Umatilla Airport.  I reduced my power and rate of climb to get the oil temp below 120 degrees F as my speed increased. 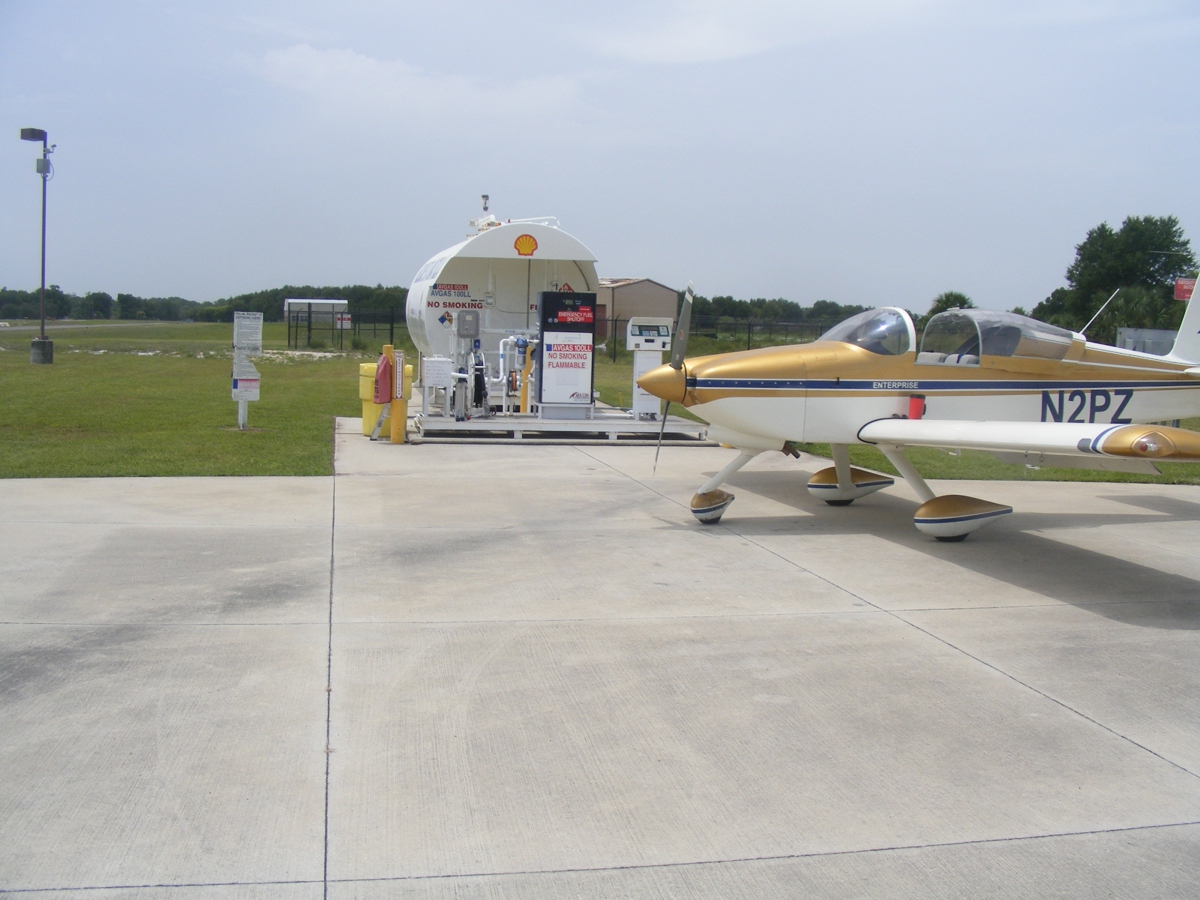 I have a couple of FAA navigation waypoints I use on the GPS to remain clear of the north side of the Orlando Class B air space.  With my reduced speed climbing out of the Umatilla area, the flight time over to OAKIE waypoint where I make my turn around the northeast corner of the Class B took about 22 minutes today.  The haze was fairly constant but VFR was still good as I could see the ground during the entire flight.  I did notice what few scattered clouds I passed along the way were at typical altitudes of 2,800 to 3,000 feet MSL.  Look closely under that cloud to see the Shuttle Landing Strip at the Kennedy Space Center as I fly south along the shore of the Indian River lagoon. 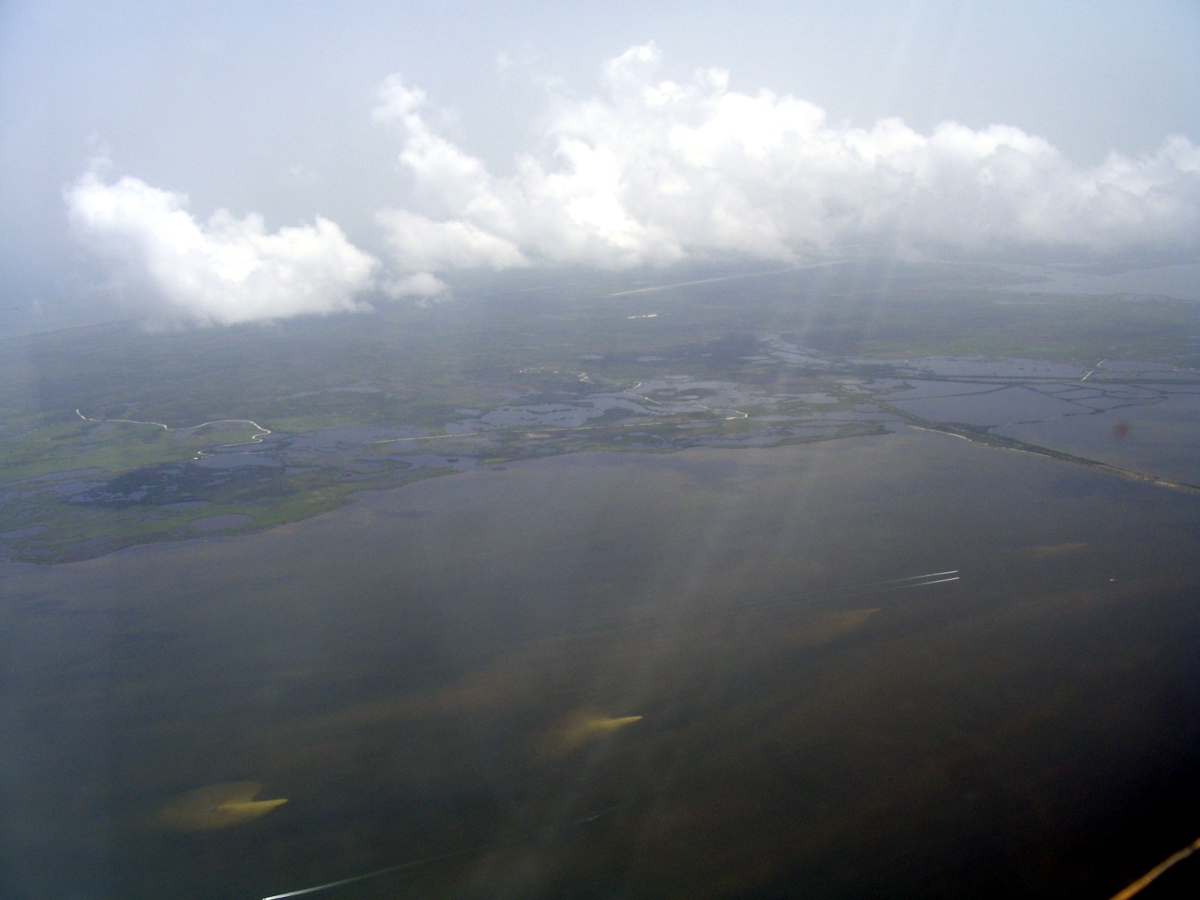 I have processed these photos to improve contrast of the features on the ground, and to add labels. 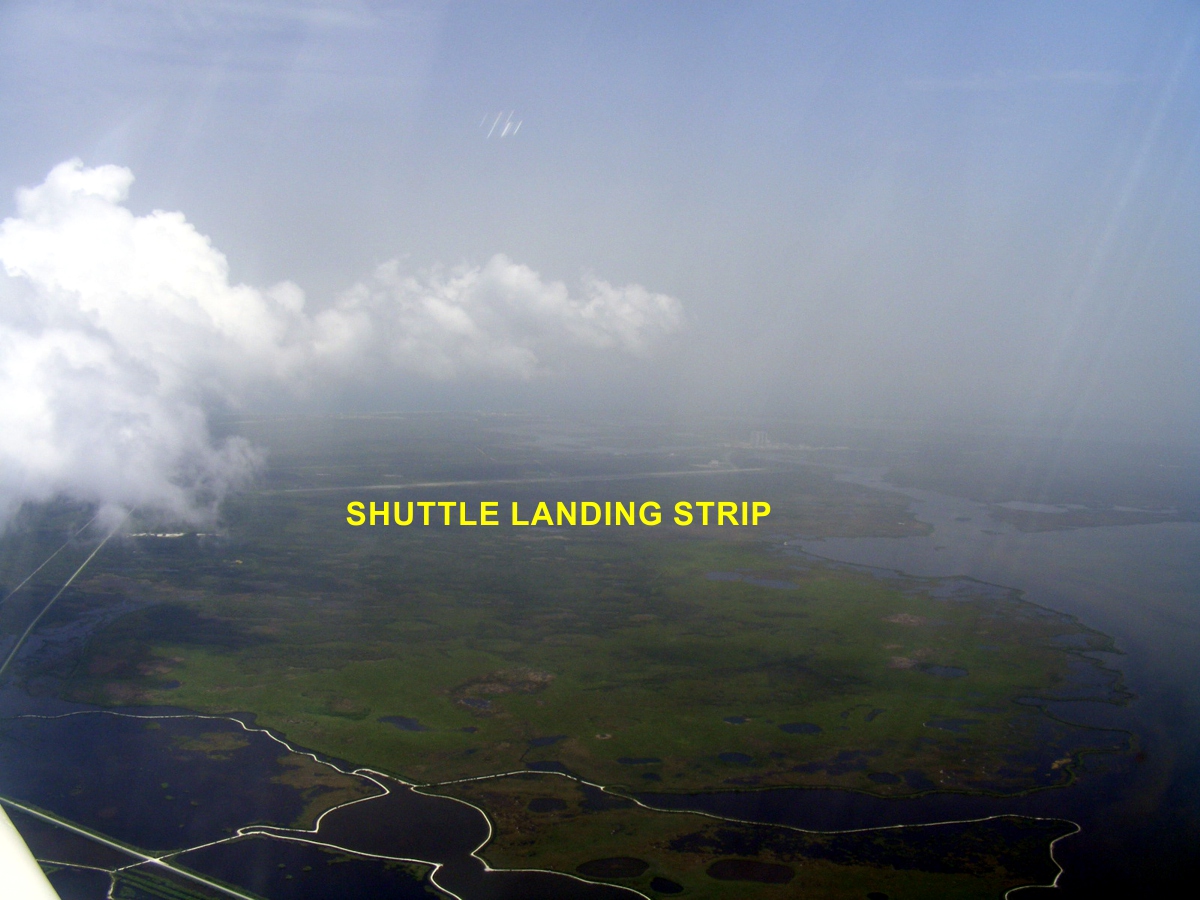 The Vehicle (originally Vertical) Assembly Building has been an integral part of the KSC infrastructure since it was completed in 1966.  I was a tourist back in the 1970's when I went inside the VAB  to see just how massive this place really is.  During my visit, they had a mockup of the Apollo / Soyuz docking section and capsules down on the floor where visitors were allowed inside.  The tour guide told the story of the first time they closed all the doors and turned on the air conditioning.  The result was the rain that fell inside the 526-foot tall building. 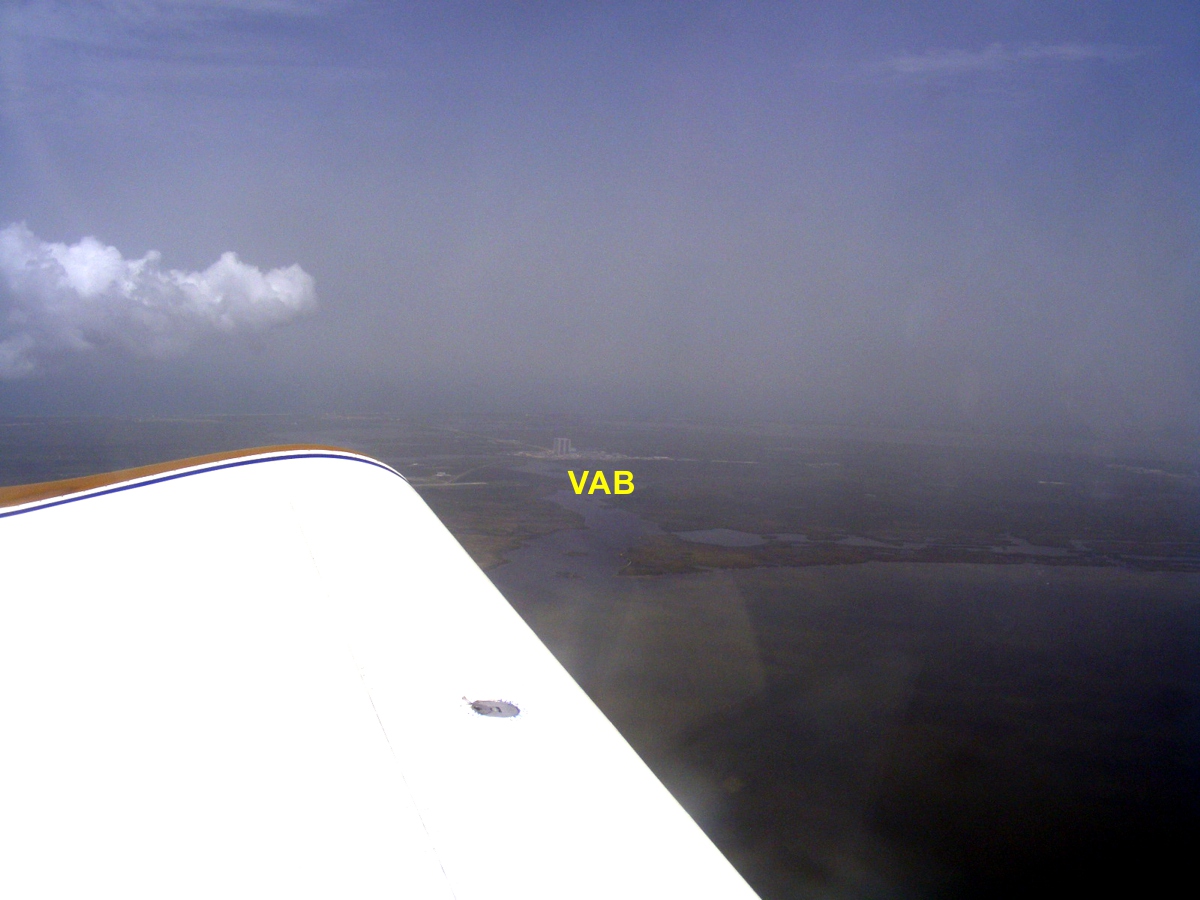 Here is a picture of the VAB from Wikipedia.  Read all about it and the weather inside via this VAB Wikipedia Article.  I realized how many times I have flown past the Kennedy Space Center and not given any links to the VAB. 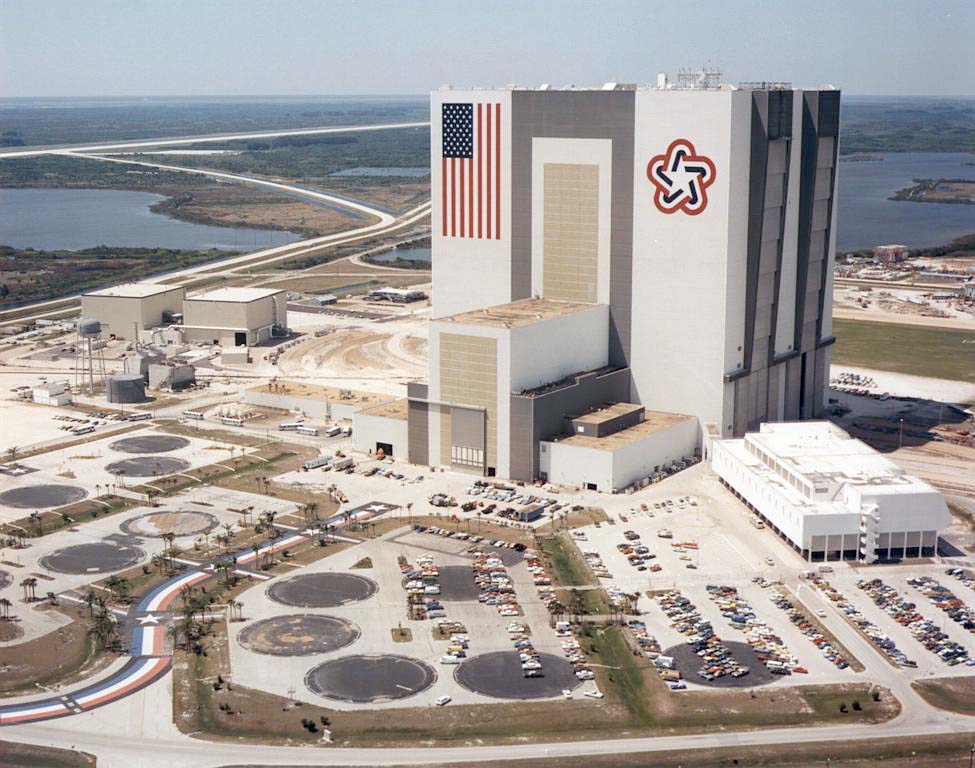 I took this photo at 1:47 PM just after the VAB photo above the image from Wikipedia.  This is about 18 miles north of the Rockledge Airport.  There is one real cloud off to my right on this heading and plenty of haze below from the Sahara Desert. 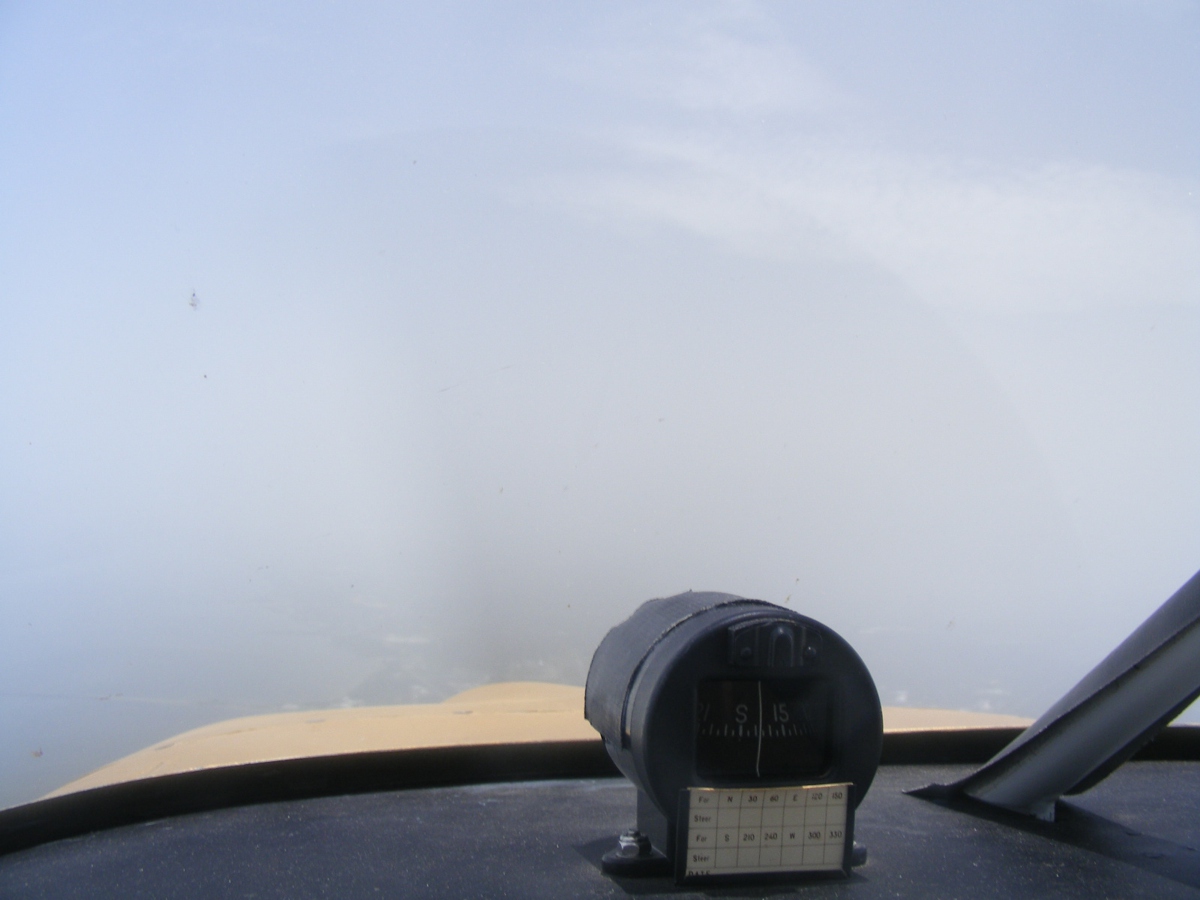 I touched down on runway 18 just before 1:56 PM.  The last GPS waypoint was recorded at 2:00:31 PM.  I put the airplane back in the hangar with some help from Bill and we had some time to visit after that.  I took this image at 2:42 PM of my car by the office before I went to McDonalds to get a fish sandwich for a late lunch. 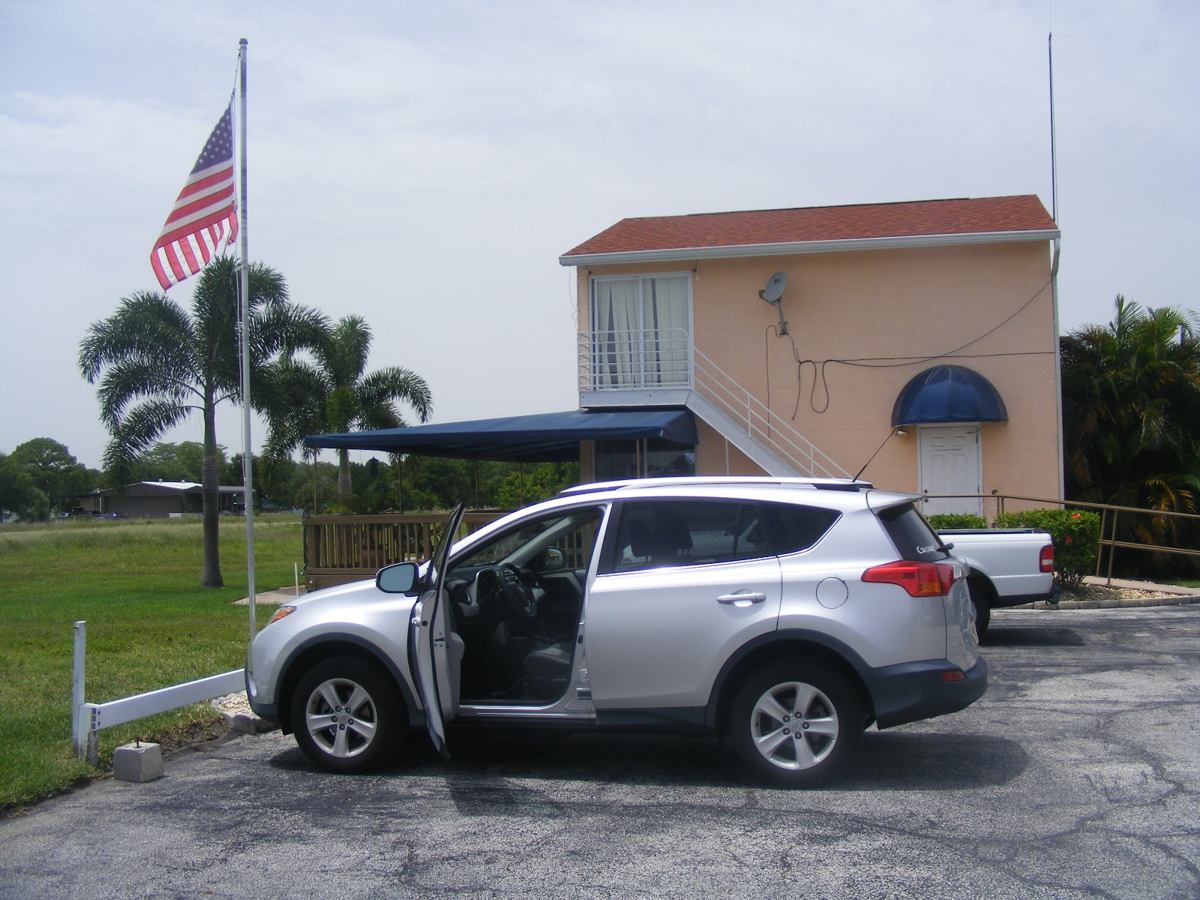 Today's two flights added 2.6 hours to the Hobbs Meter which now reads 440.4 hours total time since NEW for the Enterprise.