Flying After the Thanksgiving Holiday · · PAGE 447.

November 25, 2018:  The Thanksgiving holiday weekend has a local flight to take some aerial photos.  This morning began with dense FOG here in Palm Bay that started clearing around 11 AM Eastern Time.  The afternoon flight had excellent visibility for taking aerial photos.  This image taken at about 2,500 feet MSL is looking toward the southeast across Interstate 95 passing the Melbourne / West Melbourne area.  The curved arrow is pointing south.  US 192 is lined up with true EAST and WEST at this location.  This new exit will connect to a major secondary road that leads to the Melbourne International Airport, not seen in this photo.

This is a closer view from the photo above showing more details of the area with ramps to get on an off the interstate.  A large crane is there that will be used to drive pilings for a bridge to cross to this side of the freeway.

I flew past my home to see the area of the old golf course that is now ready to build home sites in phase 1 of the project.  All the underground utilities are installed in phase 1 with the curbs and pavement in place.  Fifty home sites are in the phase 1 area. 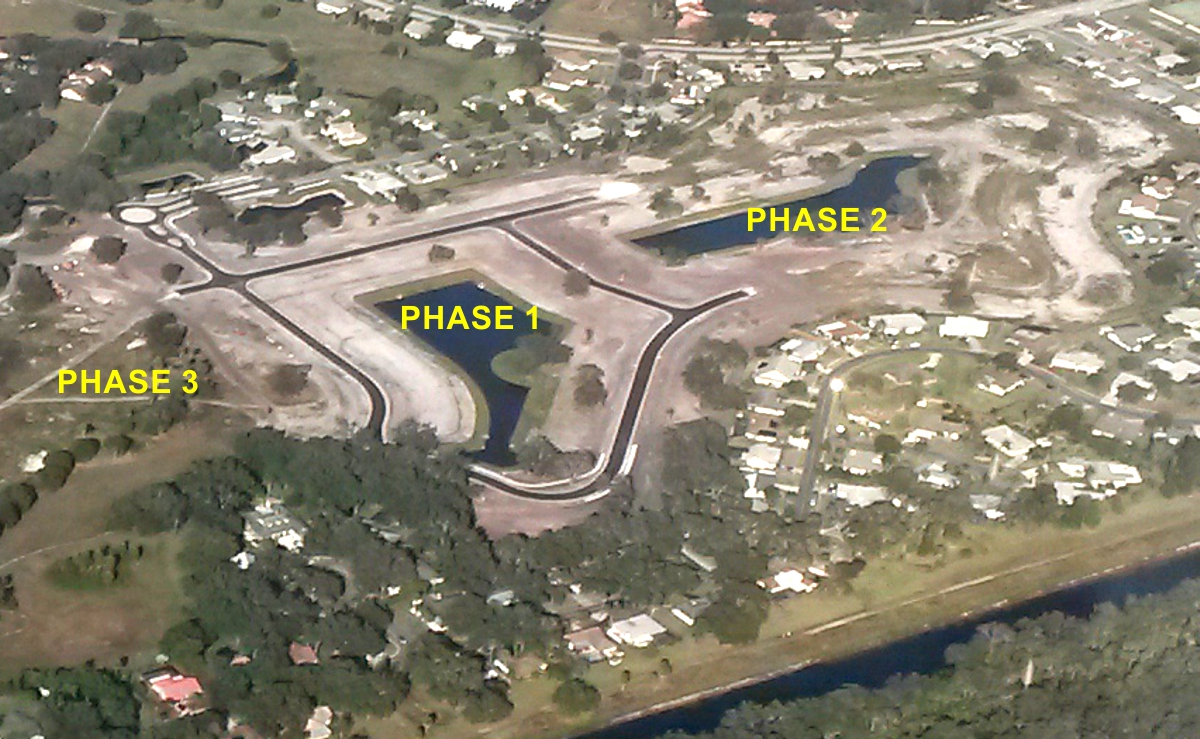 The following text will fill in the long silence from this web site.

December 3, 2018:  My wife woke me at 2:15 AM to tell me she was having chest pains.  We got dressed and went to the hospital by 3 AM.  They did some blood tests to confirm an enzyme was present indicating she had a minor heart attack.  Her first symptom of an upset stomach was a week prior to the trip to the hospital.  She had more symptoms at 11 PM each of the three nights before going to the hospital.

December 6, 2018:  The big test was on Thursday, December 6 in the CATH lab where blocked coronary arteries are mapped via x-ray images with contrast dyes.  Her Coronary Artery Bypass Grafts (CABG) from December 2008 in Jacksonville were part of the problem now.  The heart surgeon paid us a visit after reviewing the results of today's tests.  He had the talk about survivability of 95% with surgery to repair the damage, and 5% without surgery.  The surgery was scheduled for Monday, December 10 to allow the test drugs to clear out of her system over the weekend.  We had family visitors over the weekend.  We had some alone time to watch a streaming video on her computer like we sometimes do at home.

December 10, 2018:  The surgery started early that morning with expectation she would not get back to her room until just after 12 noon.  I came around 2 PM expecting to see her asleep due to the anesthesia.  The nurse tried to wake her after I got there, with no success.  A neurologist examined her and ordered a full x-ray scan of her brain which would be early the next day on Tuesday, December 11.  The x-ray brain tests showed permanent damage that was preventing her from waking up.  The heart surgeon visited us after seeing the scans.  He thought some plaque had dislodged from the aorta above the heart with the debris lodging in the lower lobes of the brain.  She may have heard us talking, but all her motor skills were gone.  An electro-encephalogram showed no reaction to external stimulus from a pin stick to holding her eyes open and using a strobe light pulsing at different rates.  I learned that breathing, heart beat, and cough reflex are controlled by the brain stem.  When she would start to take a breath, the ventilator would detect it and provide adequate ventilation with an air/oxygen mixture.

December 12, 2018:  Her vital signs were normal until Wednesday around 12 noon when they started to decline.  By 6 PM on Wednesday, her kidneys stopped working.  She went from a high fever to cold on this day.  I asked the nurse to call me if I am needed.  I went home to get some needed sleep.

December 13, 2018:  I returned to the hospital around 10:15 AM Thursday.  The nurse on duty was watching the one remaining monitor.  Her declining core body temperature was headed for hypothermia.  At 10:45 AM, there were heart palpitations (rapid heart beat) before the heart rate slowed to normal then went lower.  The last three beats occurred at 10:45 AM when she flat-lined and the nurse turned off the ventilator.  I bent down to her right cheek to give her a good bye kiss and whispered "I love you and safe travels."  The nurse reminded me that the ears are connected to the brain where there was no damage from the plaque blockages to the lower brain.  She probably heard all our conversations.  Her last three unusual heart beats could have been "I love you" in the last communication from her dying body.  I have an electrical engineering degree and have worked in communications my entire adult life after serving three years in the US Army.  The human body is the most complex electro chemical system.  Her system failed as she drew her last breath.

I asked the nurse to put back her denture to restore her smile as she was disconnecting the remaining IV lines and the central line that provided core body temperature sensing.  My wife had set up a "whole body donation" for scientific testing and / or medical school training.  I called the number on the donation card and a young lady named Amy answered and faxed current medical documents to the nurse. We filled in the paperwork to be faxed back to the company in Maryland.

December 17, 2018:  I received a call from Amy at Anatomy Gifts Registry confirming the arrival of my wife's body at their facility in Glen Burnie, MD.  She indicated I would receive a letter in about 1 year to explain how medical science has been helped from her whole body donation.

December 23, 2018:  The family gathered in Fort Lauderdale not far from where my wife's sister and brother live to celebrate her life.  We had family photo albums to remind us of how my wife had affected each of us over the 32 years she was my companion in life.  The venue was a beach-front restaurant at a hotel overlooking the Atlantic Ocean. The winds were stiff from the EAST during the afternoon, but let up to a slight breeze going SOUTH along the shoreline just after sunset.  I launched the second of FIVE hot-air luminaries that went out to sea and into low clouds.  This was the same location where my wife's mother had her ashes spread into the ocean when she passed away several years ago.

December 25, 2018:  Christmas Day had little to offer this year.  My wife's son and his wife live with us in the other side of the house.  They encouraged me to take a trip to Georgia to visit my sister, my youngest son, and a few old friends along the way.  My sister told me she was going to North Carolina with her daughters for the holiday week.  I left the house around 9 AM and stopped to see an old friend who lives near Lake City, Florida.  He is the one who taught me how to fly radio-controlled airplanes in 1978.  He has a computer virtual reality area in his shop next to the garage.  That was a trip out into space, really.  I had Christmas dinner with him and his second wife and watched my Eagles Farewell ONE Tour DVD recorded in Melbourne, Australia in 2004. It was three hours of familiar music and positive energy.  My friend got up to make some holiday phone calls during the performance.  His wife enjoyed the concert in Dolby 5.1 surround sound as much as I did.  When my friend came back before the show was over, he mentioned he is deaf in one ear.  He is also a country music fan, which explained a lot to me since I was a rock & roll DJ on the radio in the summer of 1966.

I got a budget hotel room in Lake City that night and ended up getting my evening meal at Denny's at the Interstate 10 / US 90 interchange.  It was one of a few places that are open on the Christmas holiday.

December 26, 2018:  A day for northbound travel on familiar roads to end the day with an old high-school friend I have known since first grade near my hometown of Dalton, Georgia.  The details of the death of my wife and how this trip is part of my "recovery" doing anything that is "normal" when I am on the road, was the key to our conversation that night.  I took him to breakfast the next morning.

December 27, 2018:  I drove through my home town today and took some photos in the first neighborhood I knew as a child up to age 10.  Change is inevitable and I have the photos to prove it all.  I ended the day at my son's house in Kennesaw, Georgia.  He had cashed in some frequent flyer miles to come to the family gathering in Fort Lauderdale on December 23.  We had two nights together with a couple of meals to share, including one at a cinema with restaurant food at your seat in the movie theater.  That was a new experience for me. 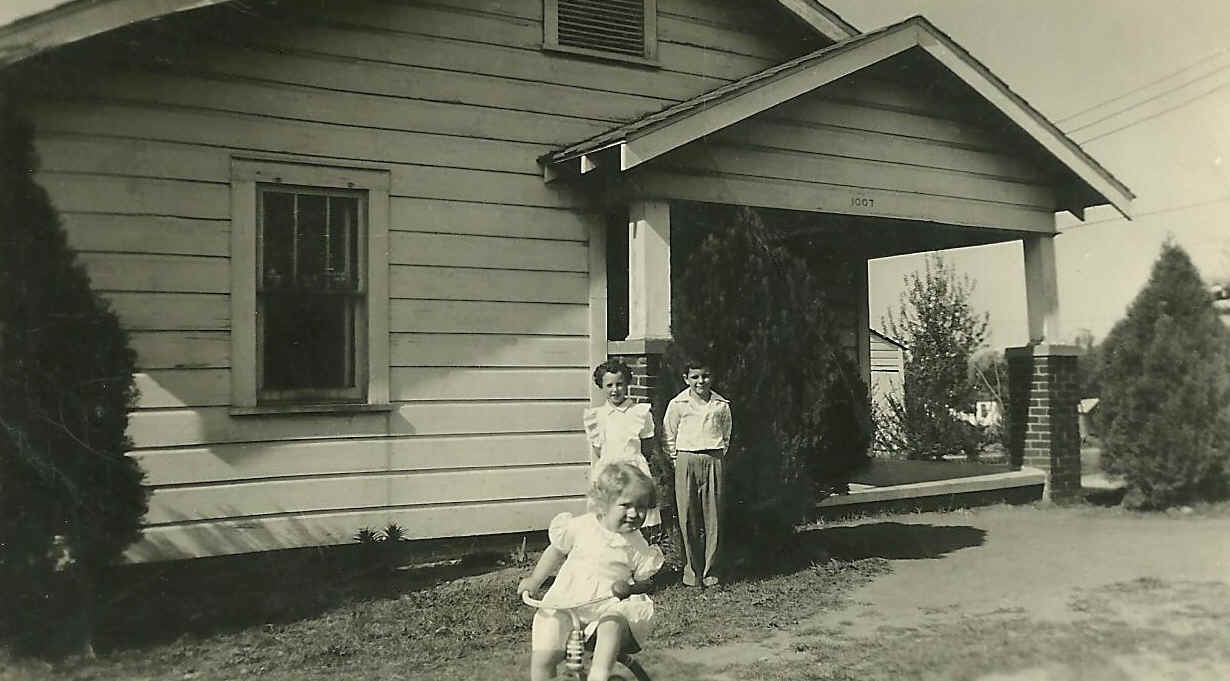 My mother's oldest sister, "Aunt Ruth" to me, is seen here in front of the house shown above.  The next year, we got a new Ford and you can see I did not need any help to stand up and pose for the camera with my mother. 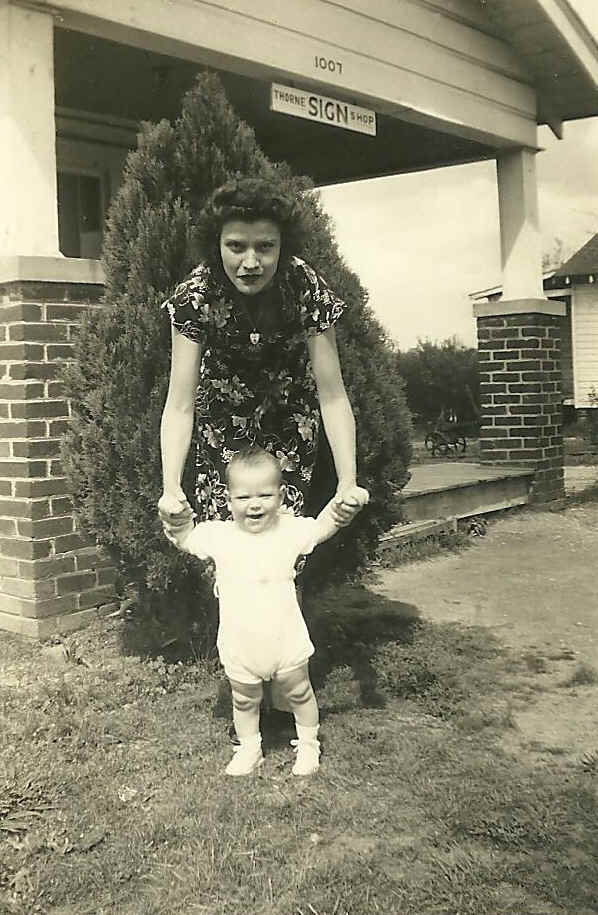 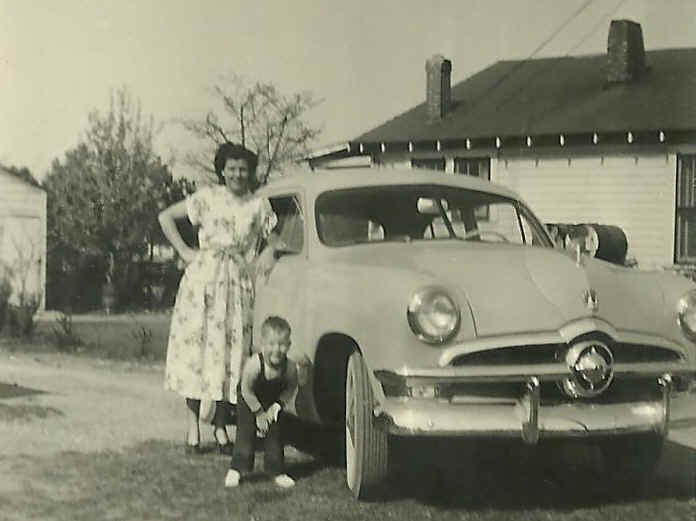 This is how the house looked in December 2018.  The main portion of the house from 1947 and the garage in back with some modifications are seen here.  The vent from the attic has been replaced with a window as seen below.  The front porch has been closed in to become a room. 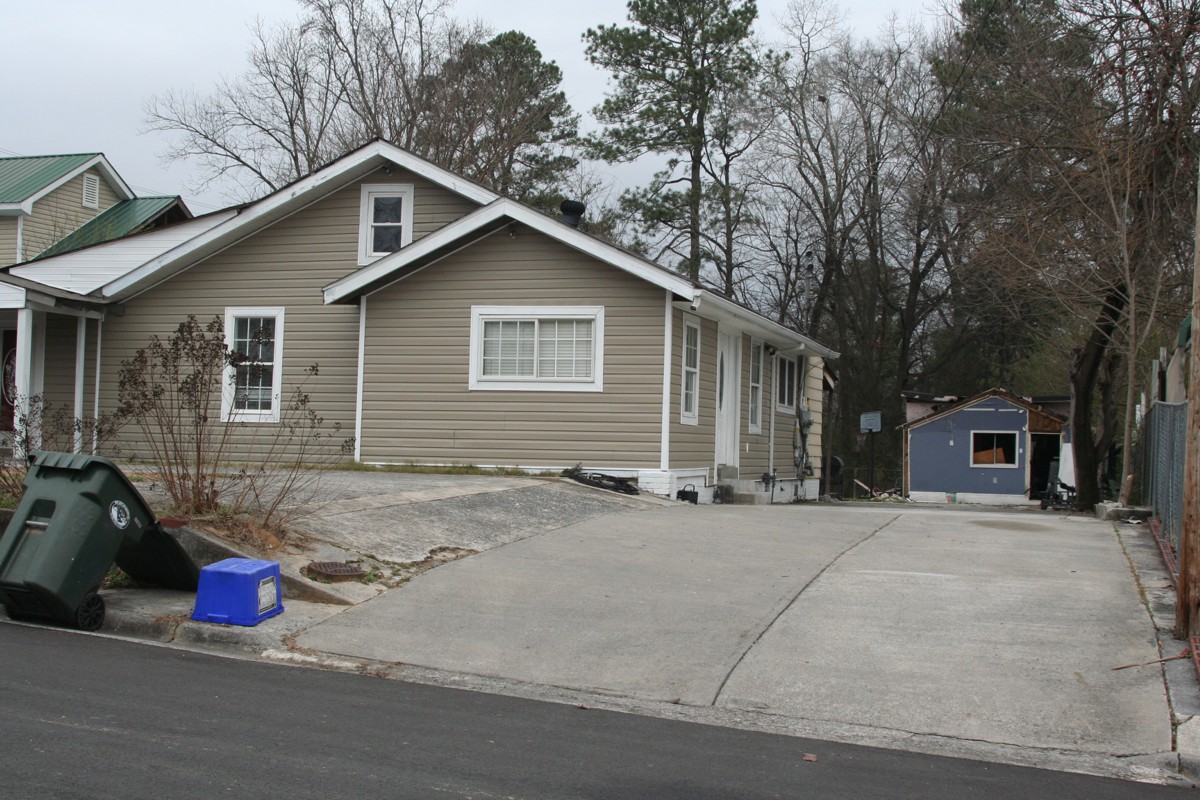 The old garage has another building behind it. 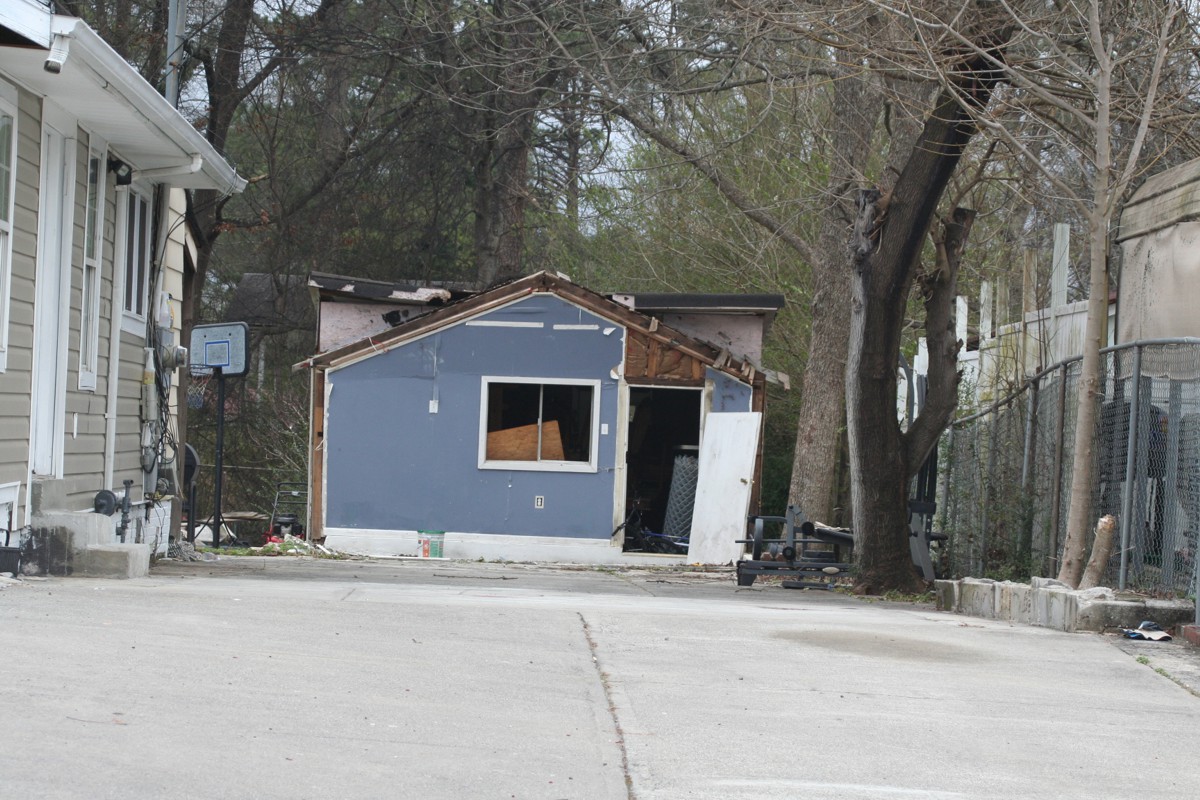 The house has an addition on the left side with a second entrance. 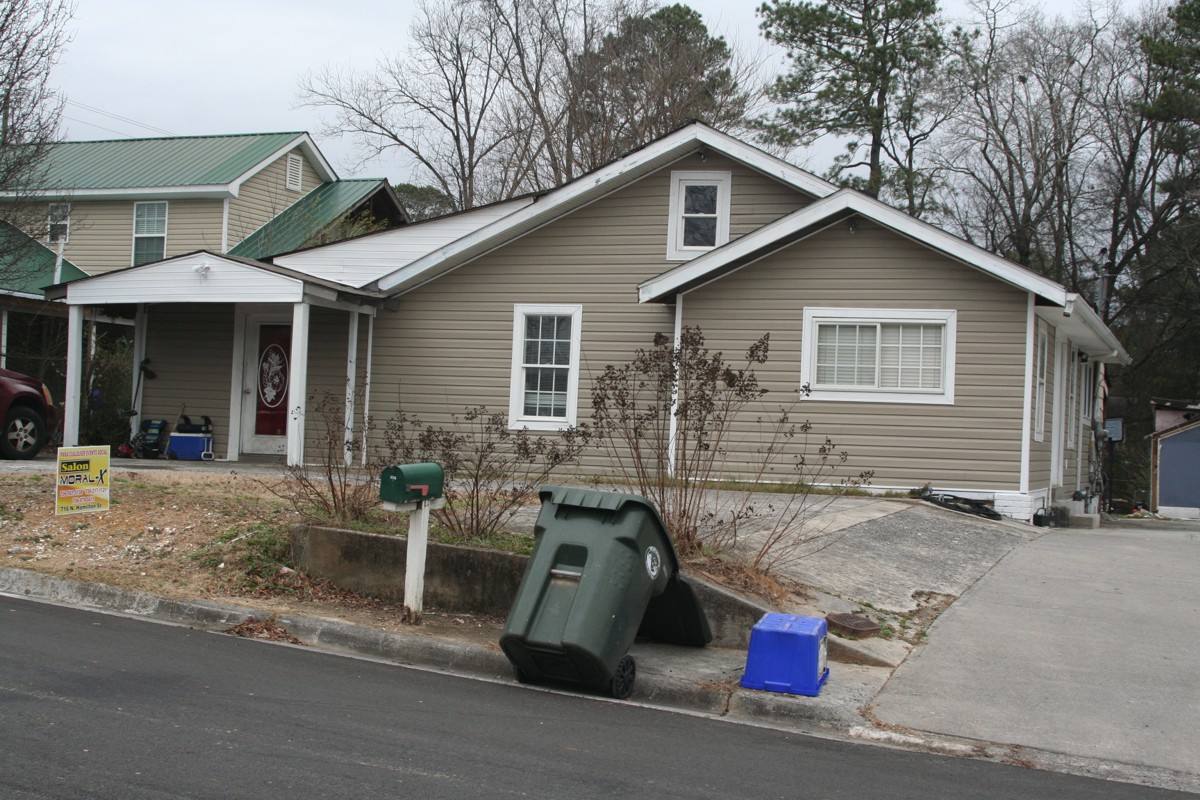 Here is the front side of the addition with a second entrance.