November 10, 2018:  The Weather on this Saturday was OK for flying with some clouds in the area to negotiate.  The northbound departure from Rockledge was the usual avoidance of the controlled air space for the nearby airports and restricted air space for the Kennedy Space Center.  The Indian River Lagoon was again clear of clouds for my climb up to 4,500 MSL to turn west over the overcast seen here.  Those highest clouds appear to be above the lakes of the Saint John's River in this area.  The air above is CAVU:  Clear Above, Visibility Unlimited.  This is the kind of day that makes for good long-distance flights.  The air up here is VERY SMOOTH. 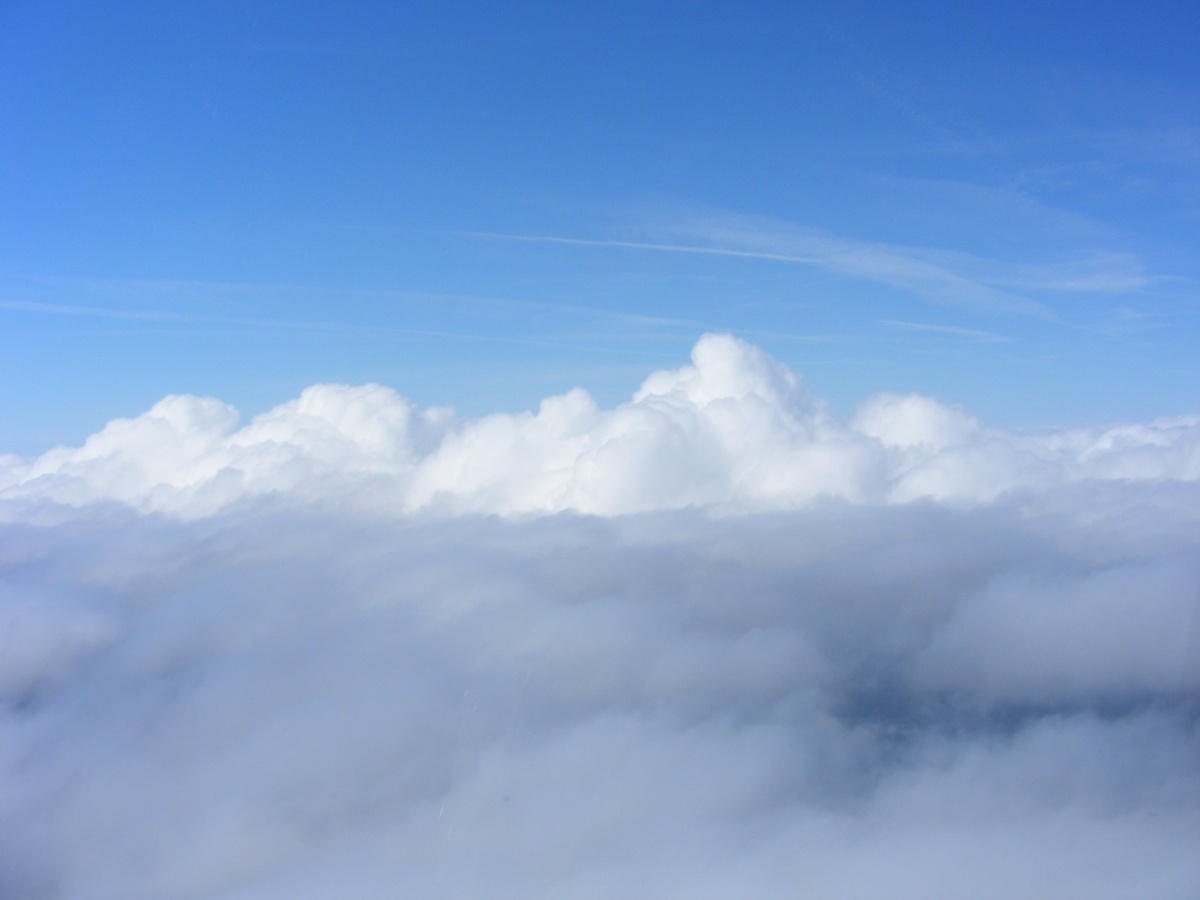 Broken clouds were in this area as I head west across the north side of the Orlando Class B air space again. 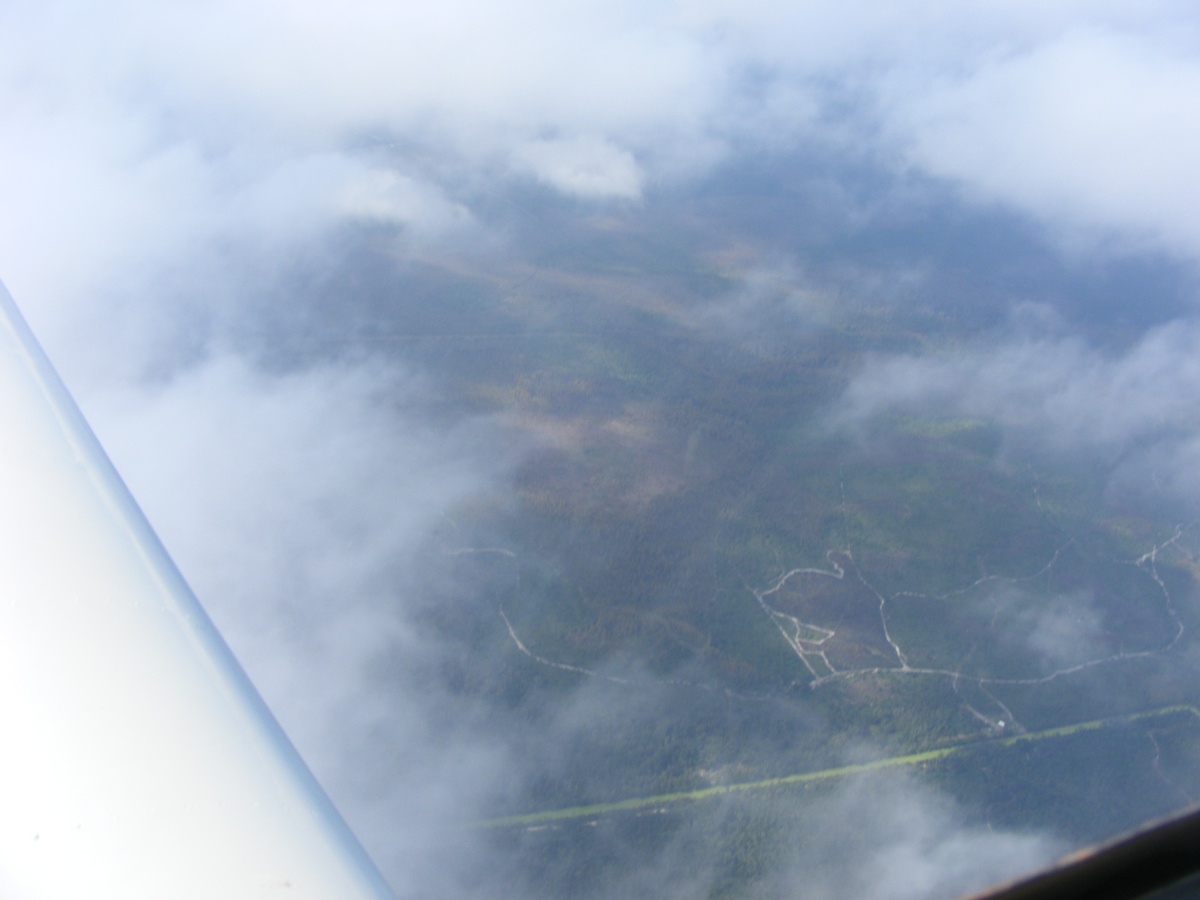 I made a slight change to the GPS course between Rockledge and Umatilla adding a new intersection (FATAD) to keep me away from the Dunn Airport parachute drop zone on the East side out over the lagoon.  The BLUE GPS ground track is the westbound flight path using my wing-leveler connected to the GPS serial port data output.  The GREEN path is the return flight hand-flown as I climbed out of Umatilla to remain clear of clouds.  That path extends just East of US 1 on the trip home to find an area clear of clouds for the descent below the clouds.  The southbound ride was West of the Titusville Class D air space and just East of Orlando Class B. 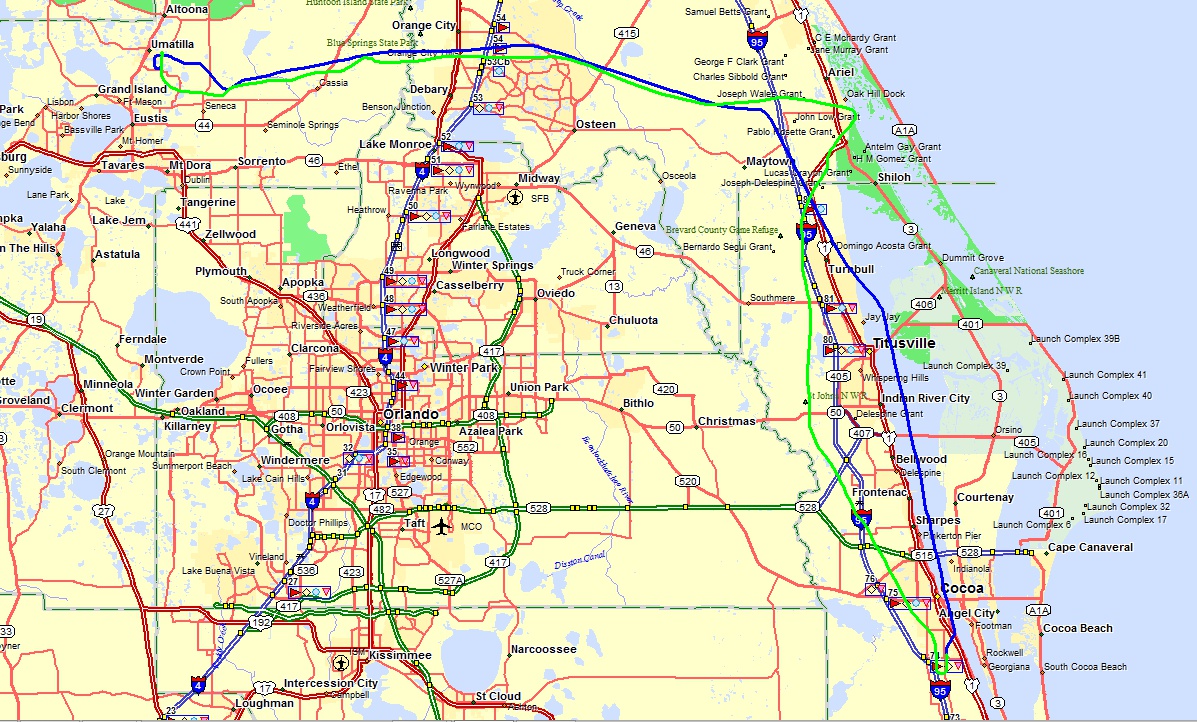 This is the last photo on the west bound path showing an area near Osteen, Florida through the broken cloud layer below.  The image was snapped from 6.500 MSL.  The cloud cover was 100% until I reached the Umatilla area allowing for a VFR descent clear of clouds. 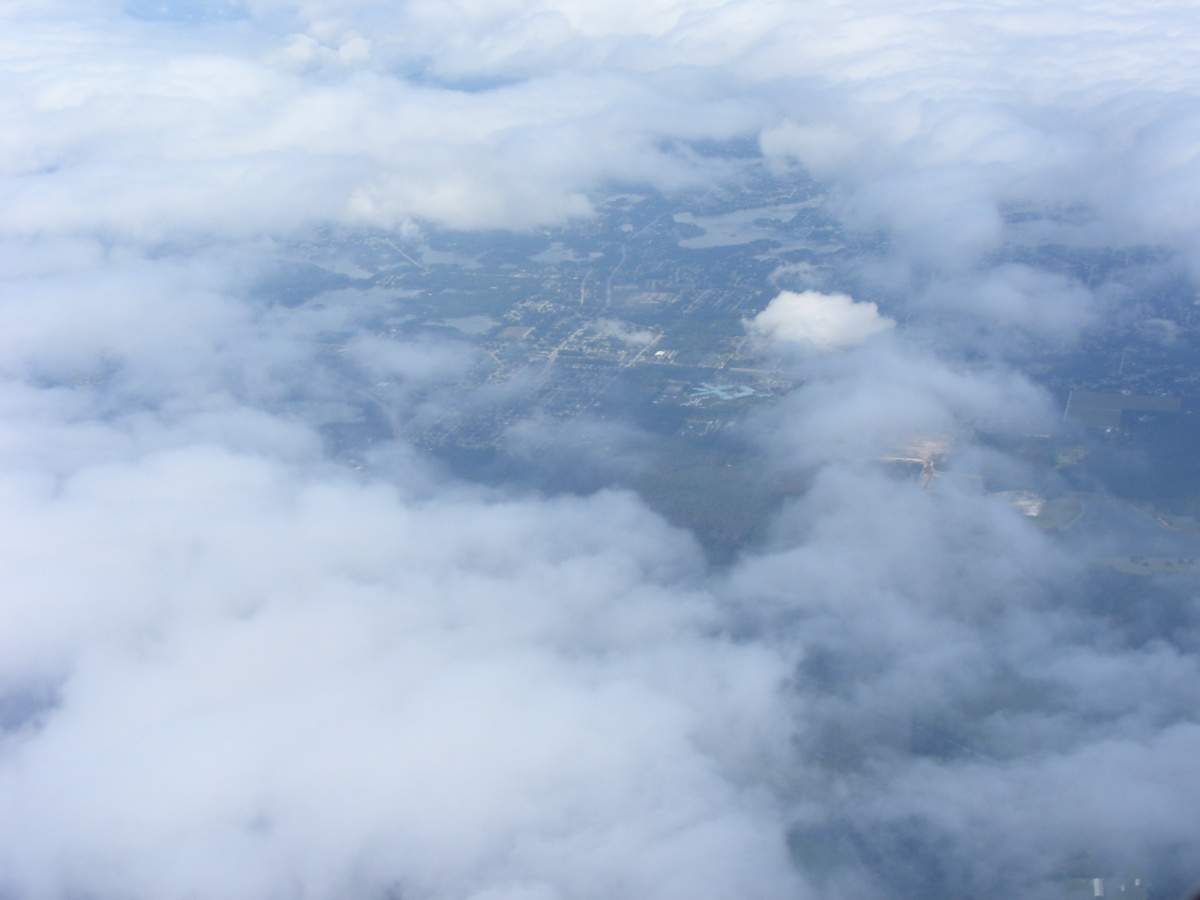 I took this first photo on the ramp at Umatilla to show the cloud cover along  my inbound route from the East. 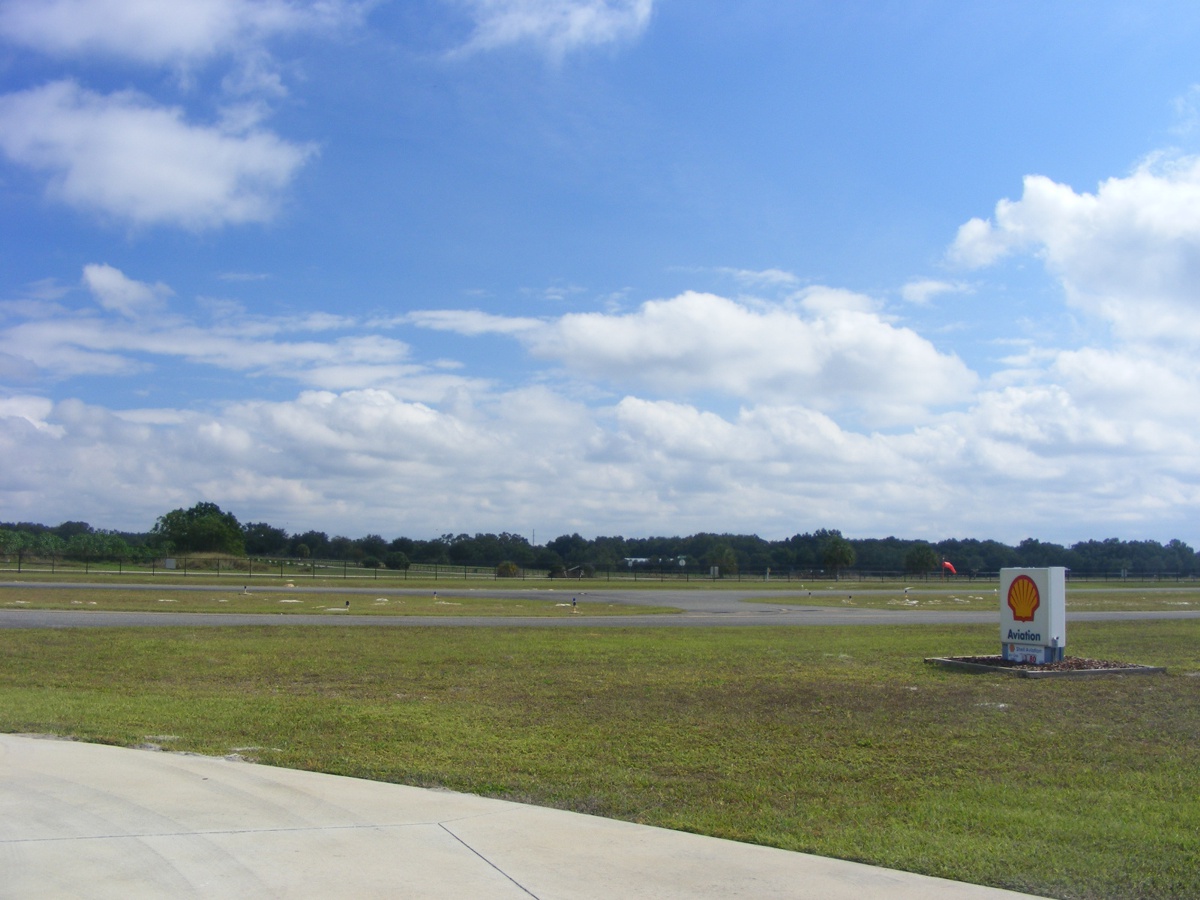 Here is the fuel price at $3.80 per gallon for avgas today. 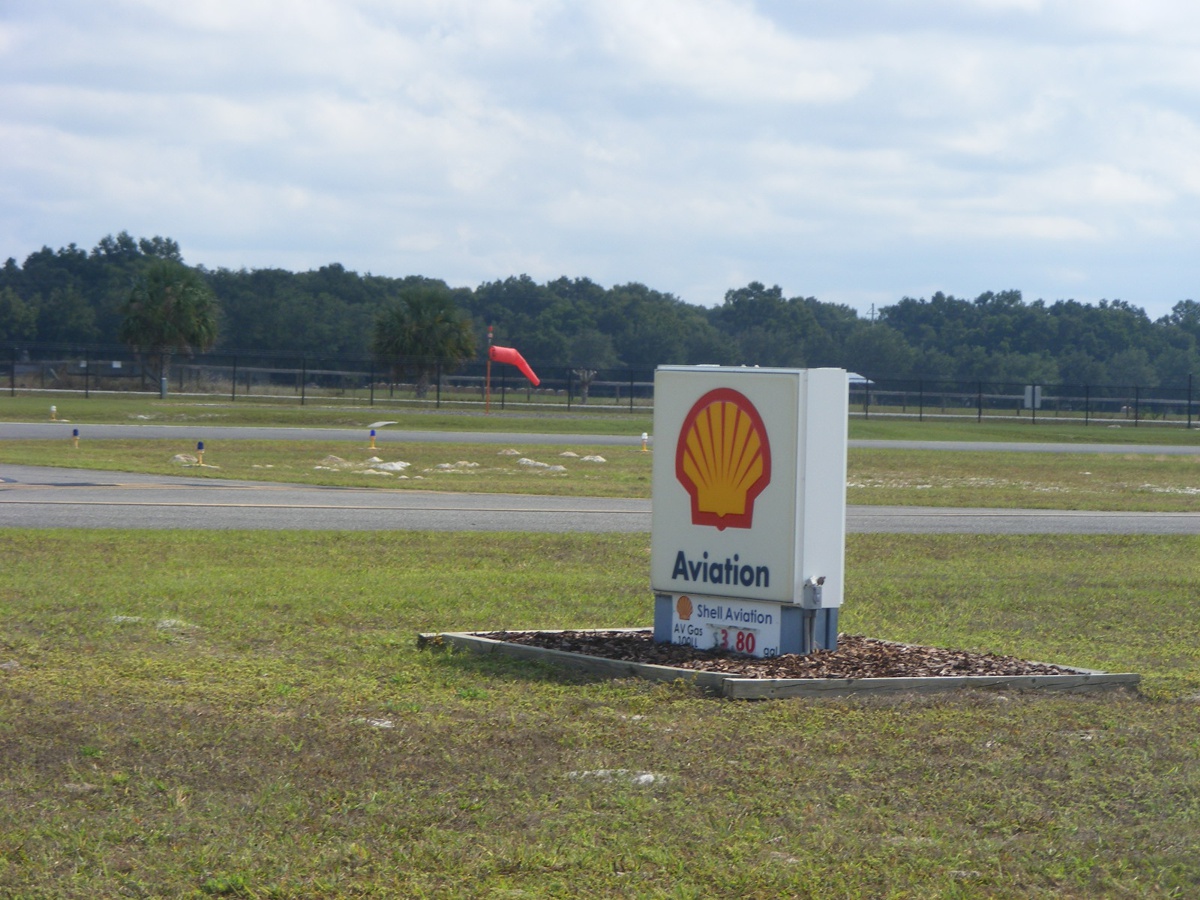 My flight path inbound and departing Umatilla today VFR.  The arrival path is BLUE and the departure path is GREEN. 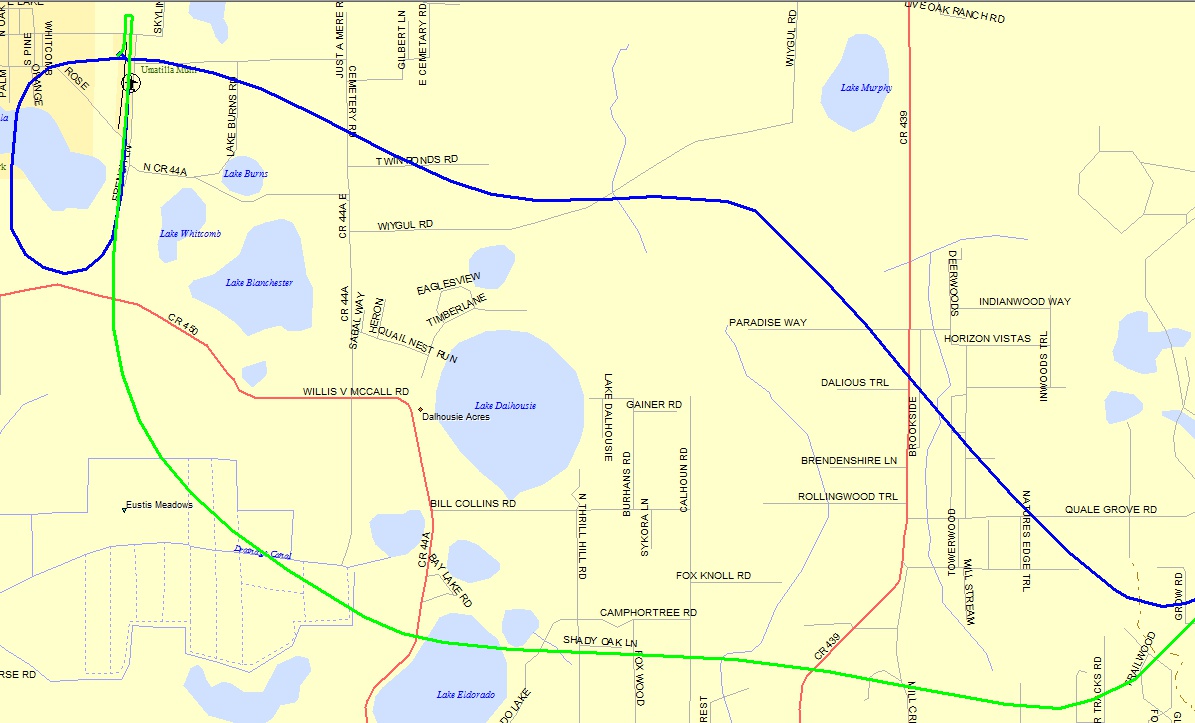 Here are the cloud cover views from the ramp at Umatilla before I departed.  The first one is looking South. 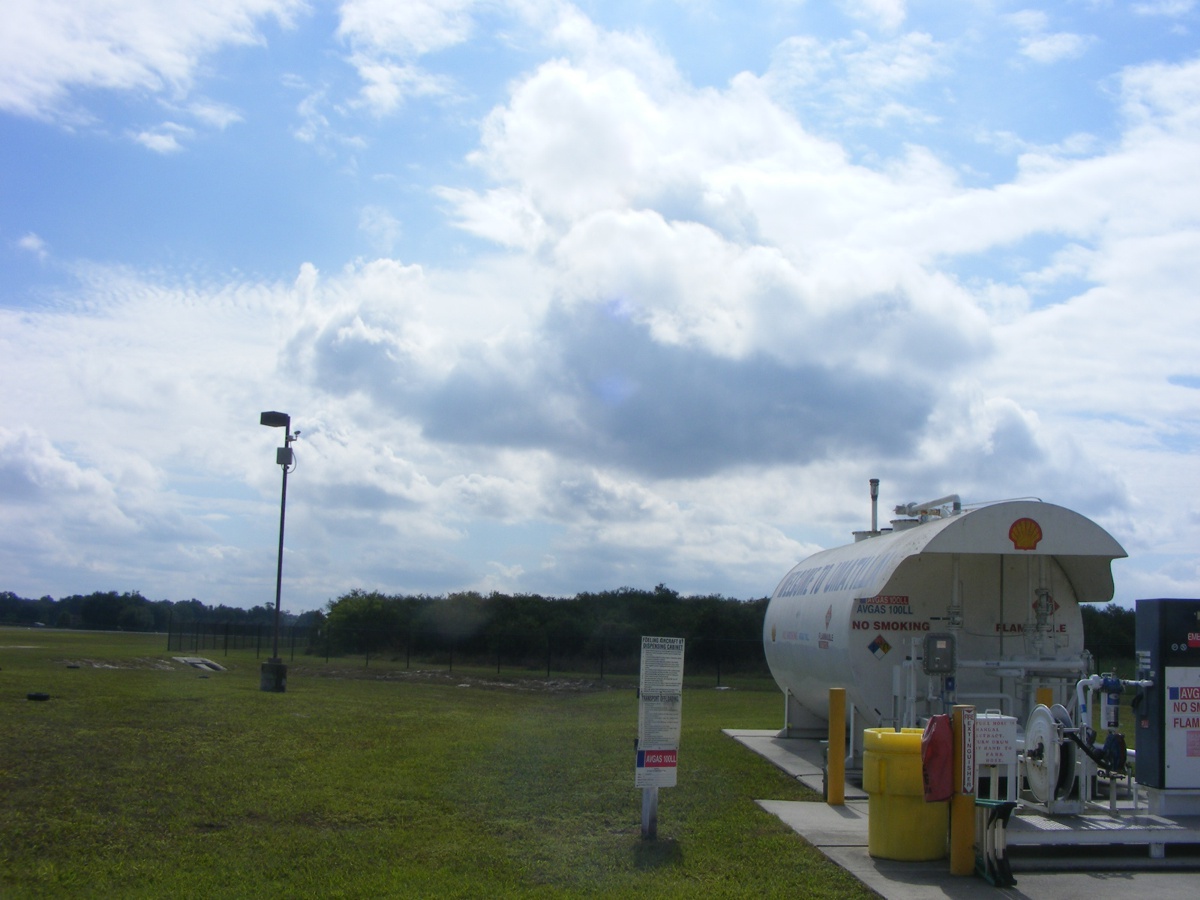 This one is looking southwest. 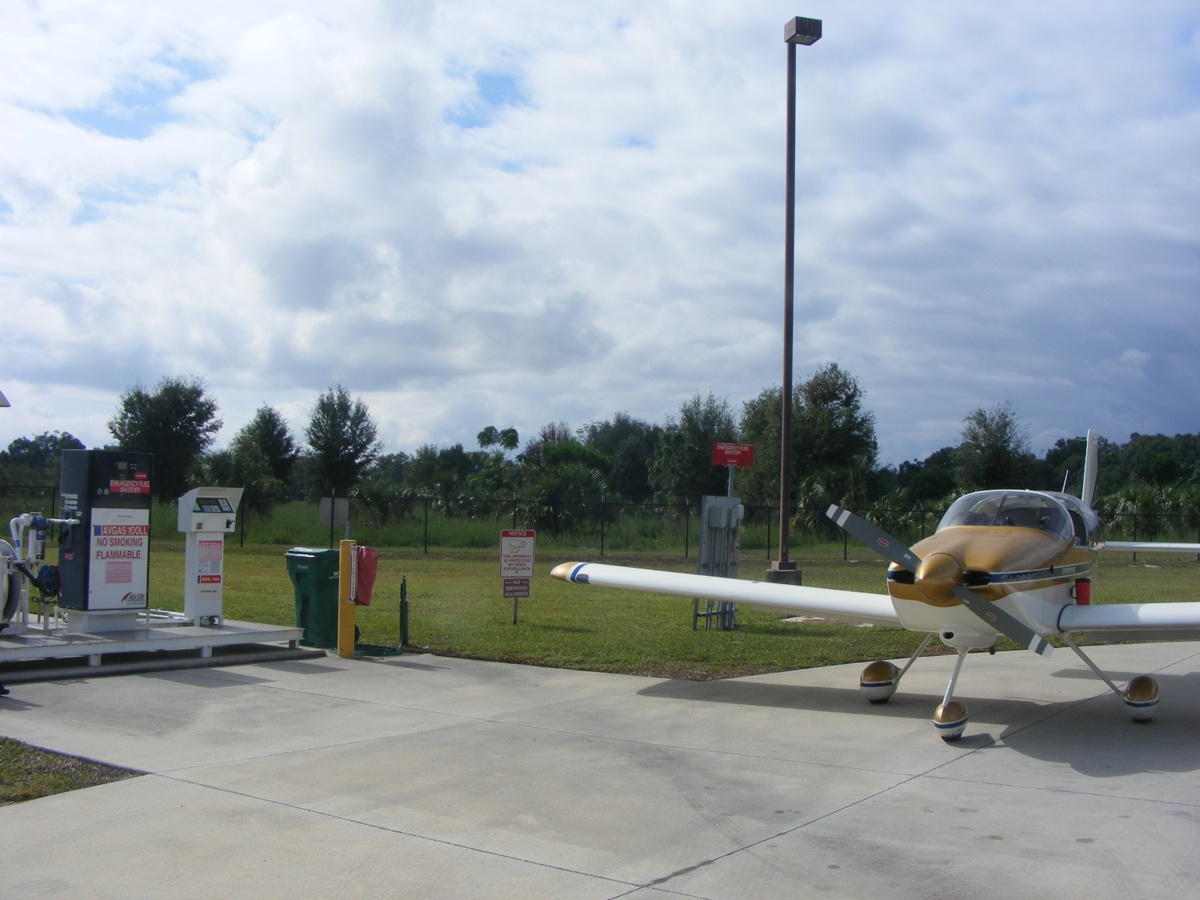 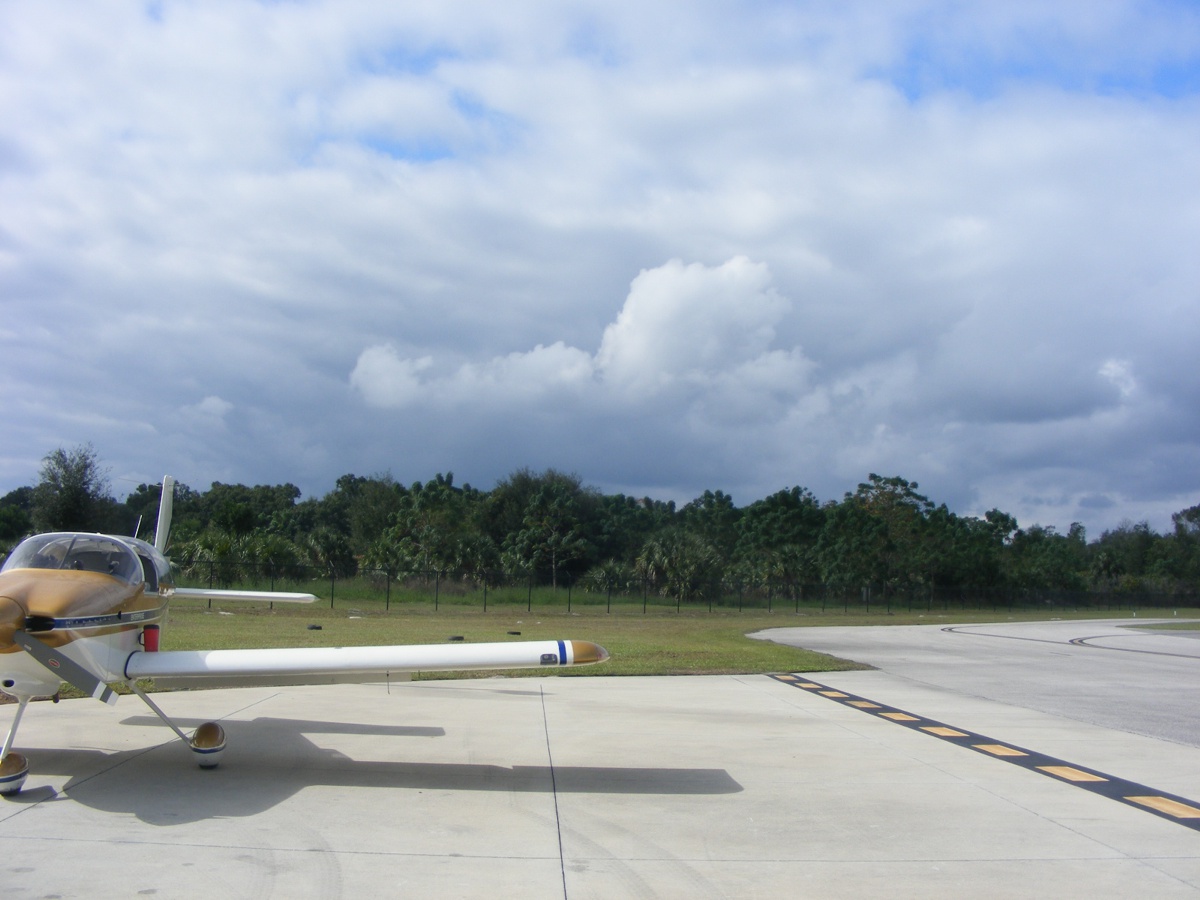 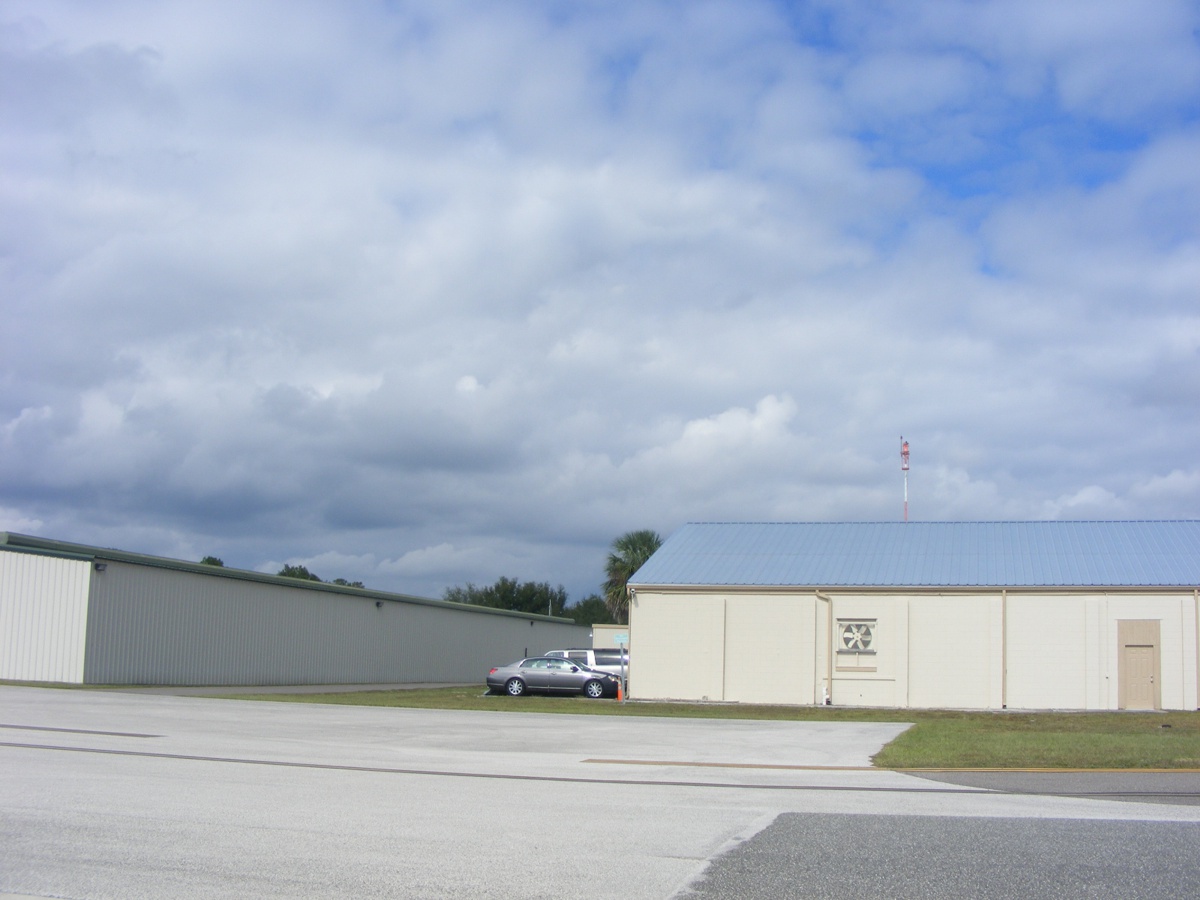 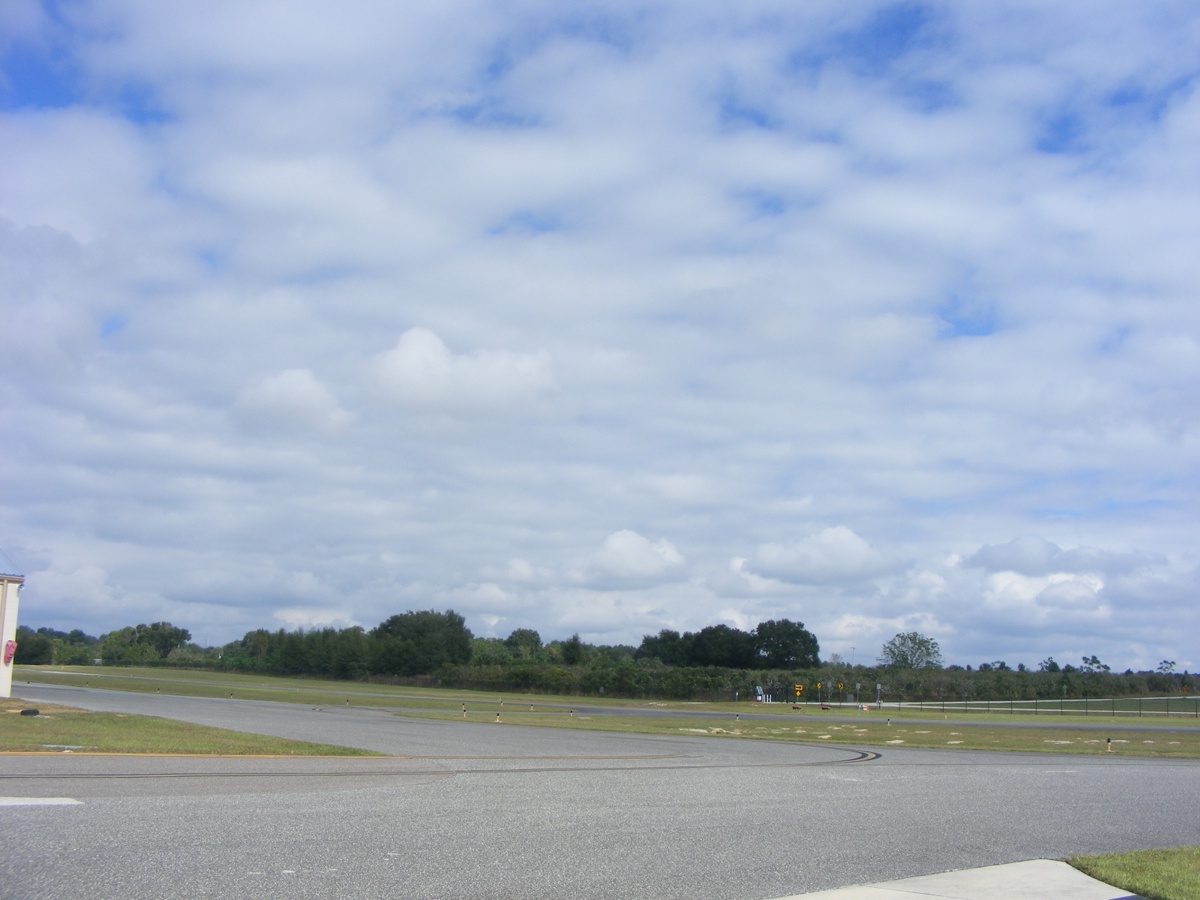 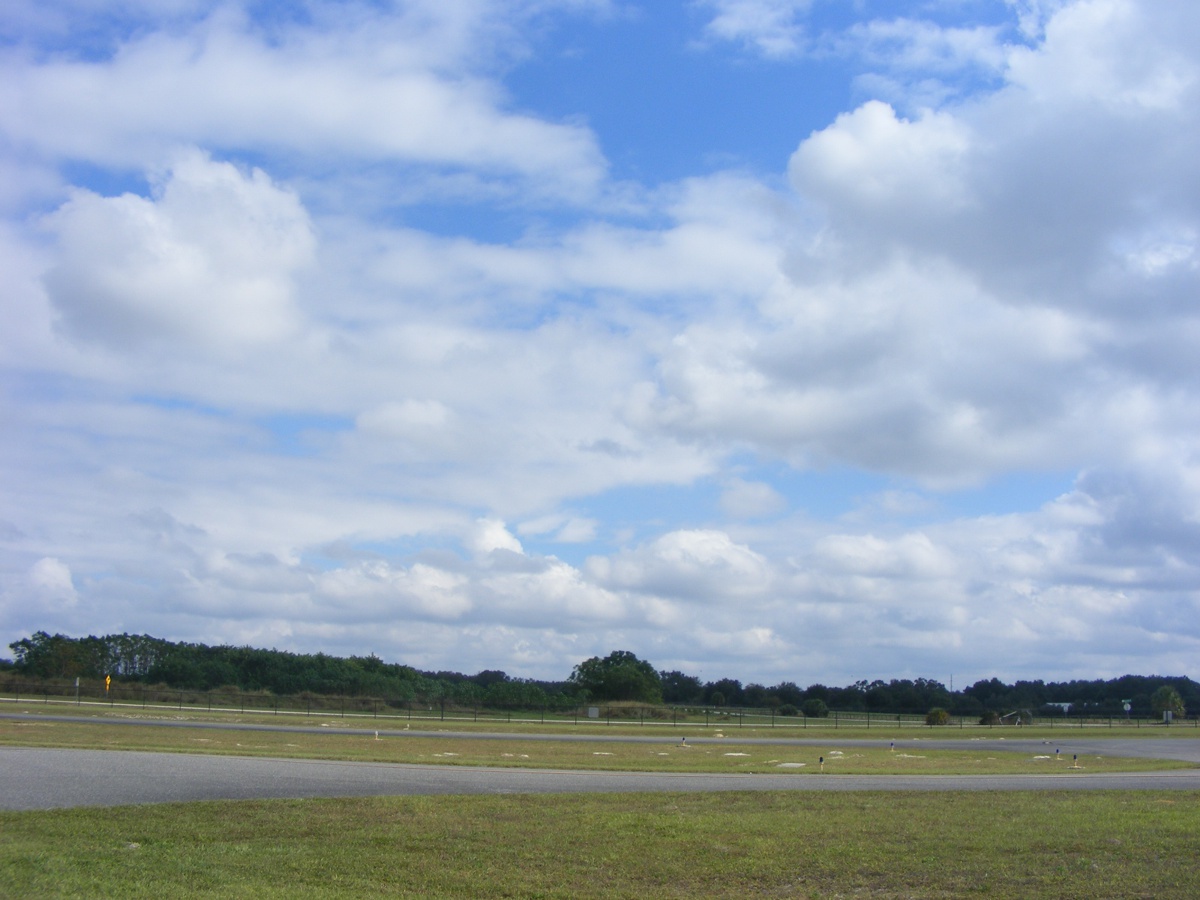 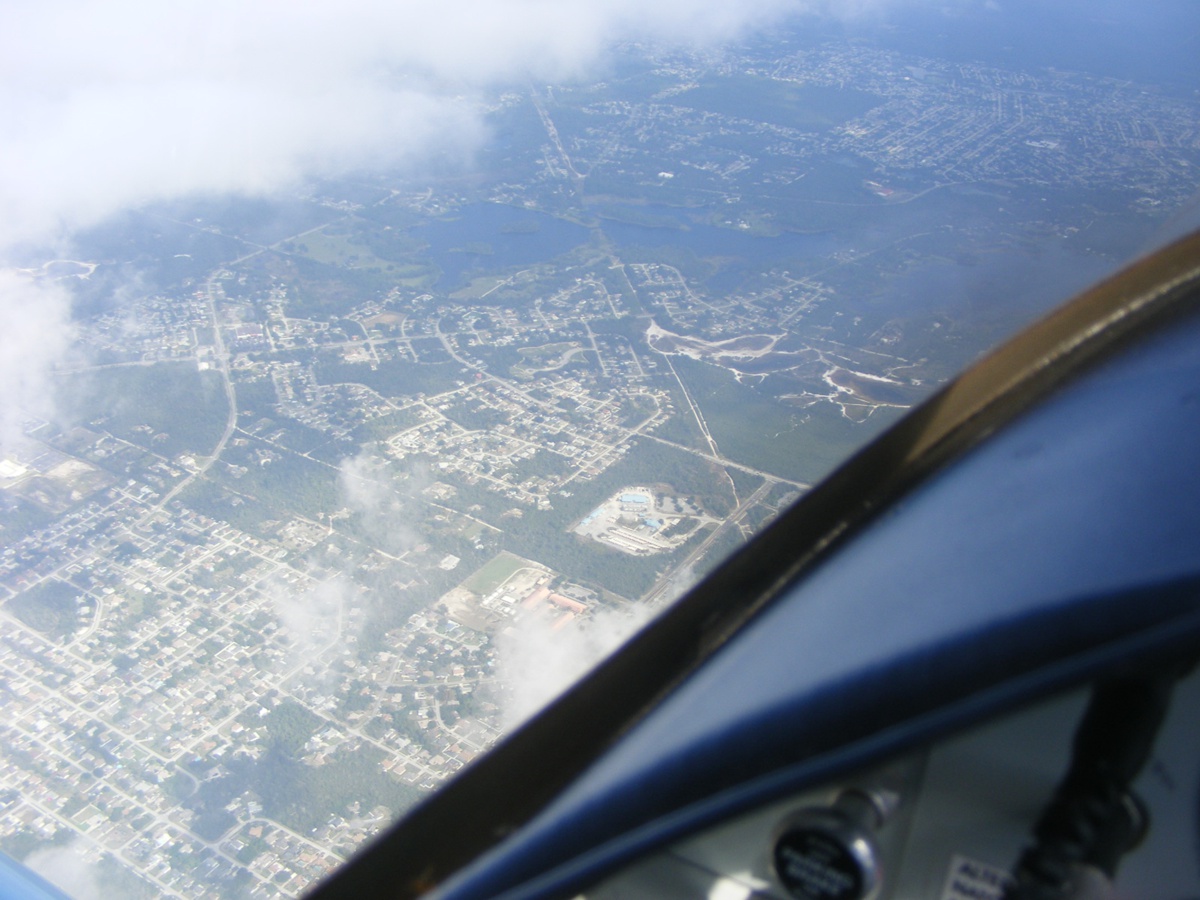 Dense clouds below with the GPS and Navaid working to keep me on course clear of Orlando Class B.  Take notice of the headings on the Dynon unit of 117 degrees and the GPS at 113 degrees indicating the magnetic variance for this part of Florida. 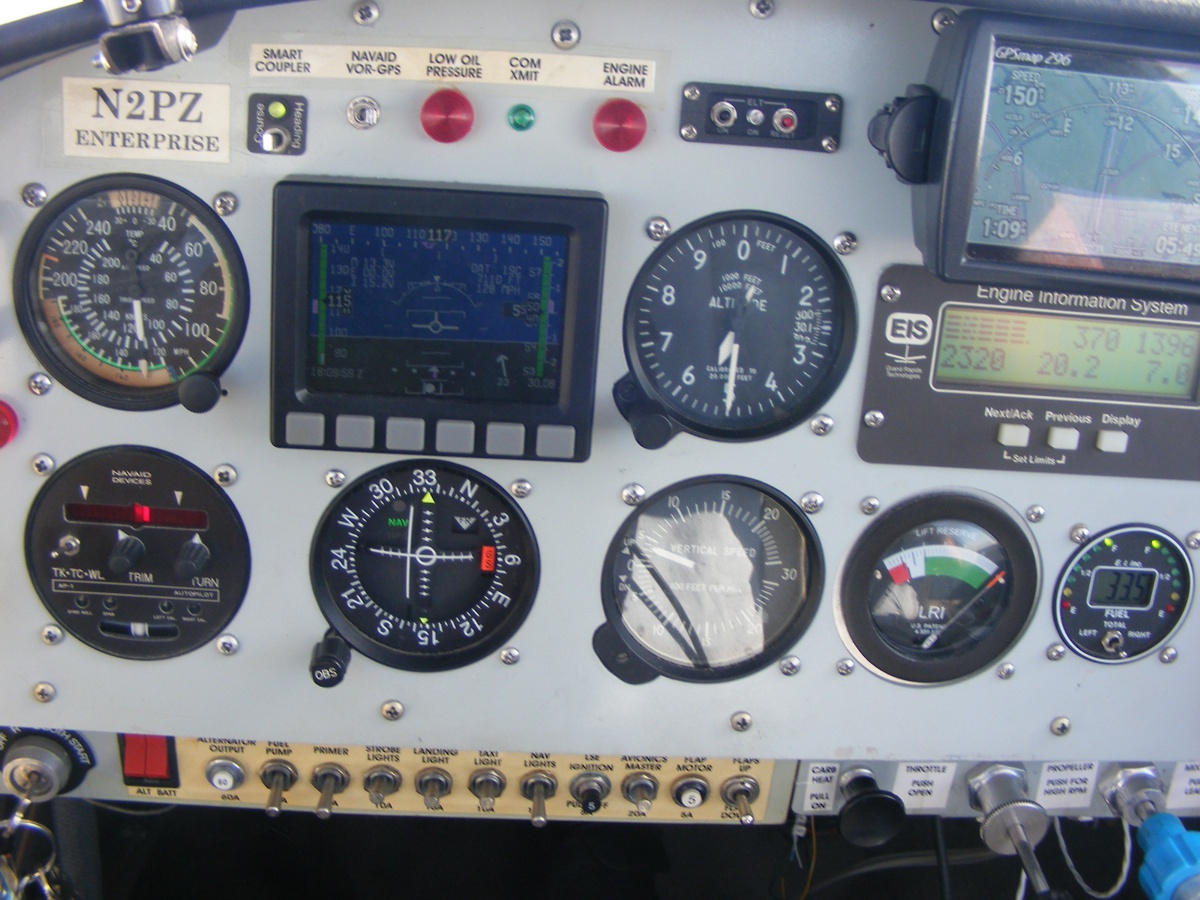 The Dynon is showing a 22 MPH tail wind in the bottom right quadrant of the display. 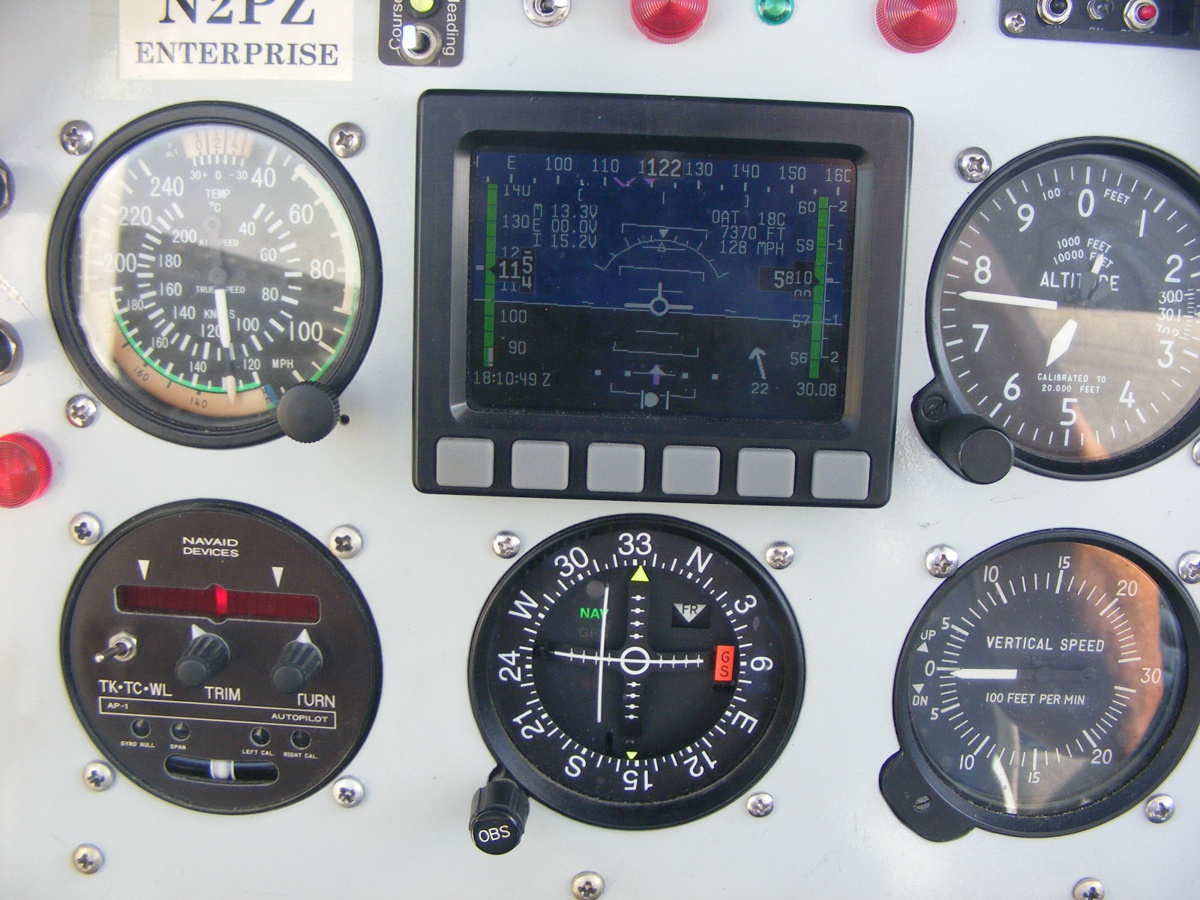 The Garmin 296 GPS is showing the southeast course line and 148 MPH over the ground heading for Oakley intersection clear of Orlando Class B air space. 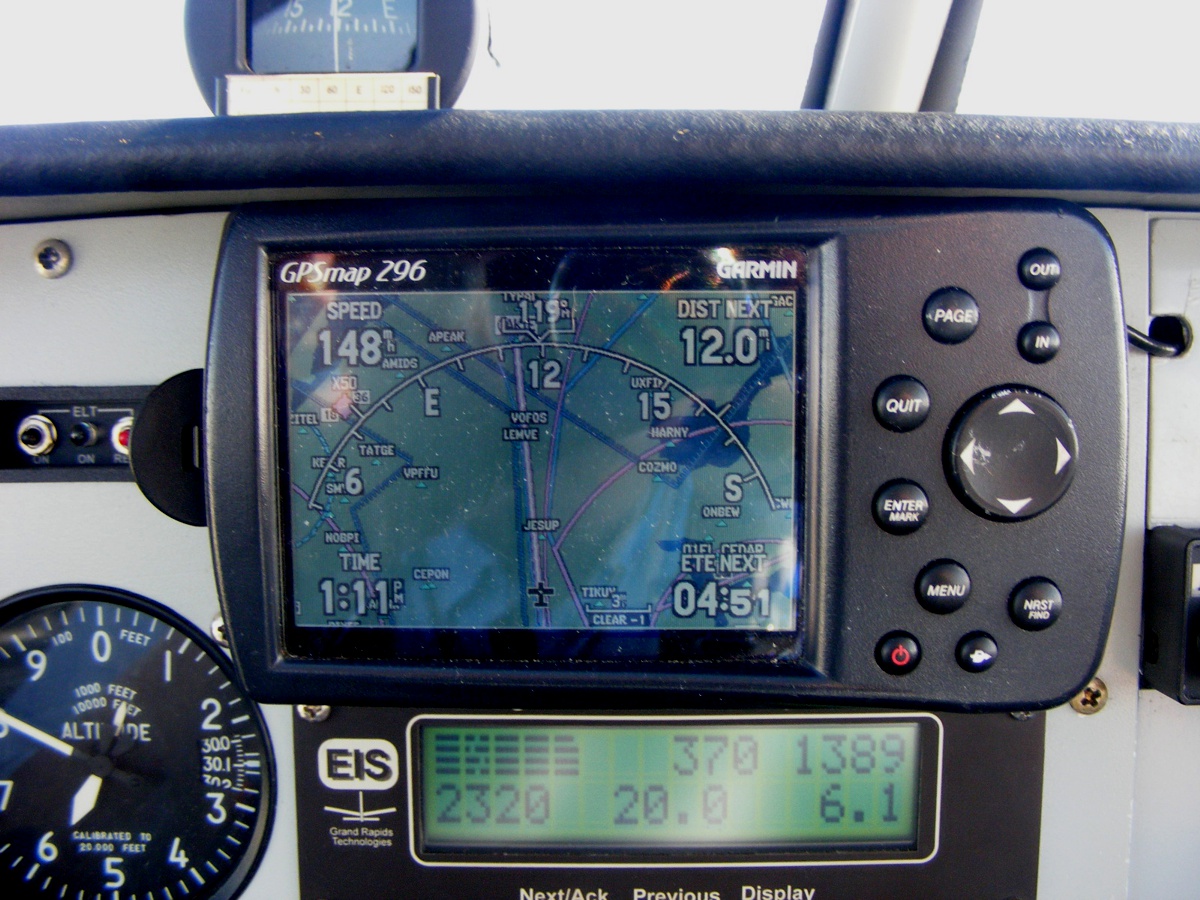 The engine monitor shows the EGT bar graph is well balanced with a fuel flow of 6.1 gallons per hour.  When I finished taking these photos, I turned off GPS tracking to hand fly the airplane on a more easterly heading, descending into a clear area over US 1 along the GREEN PATH, then turned back under the clouds to fly down the west side of the Titusville airport area.  The BLUE line heading north earlier was ABOVE the Titusville Class D air space. 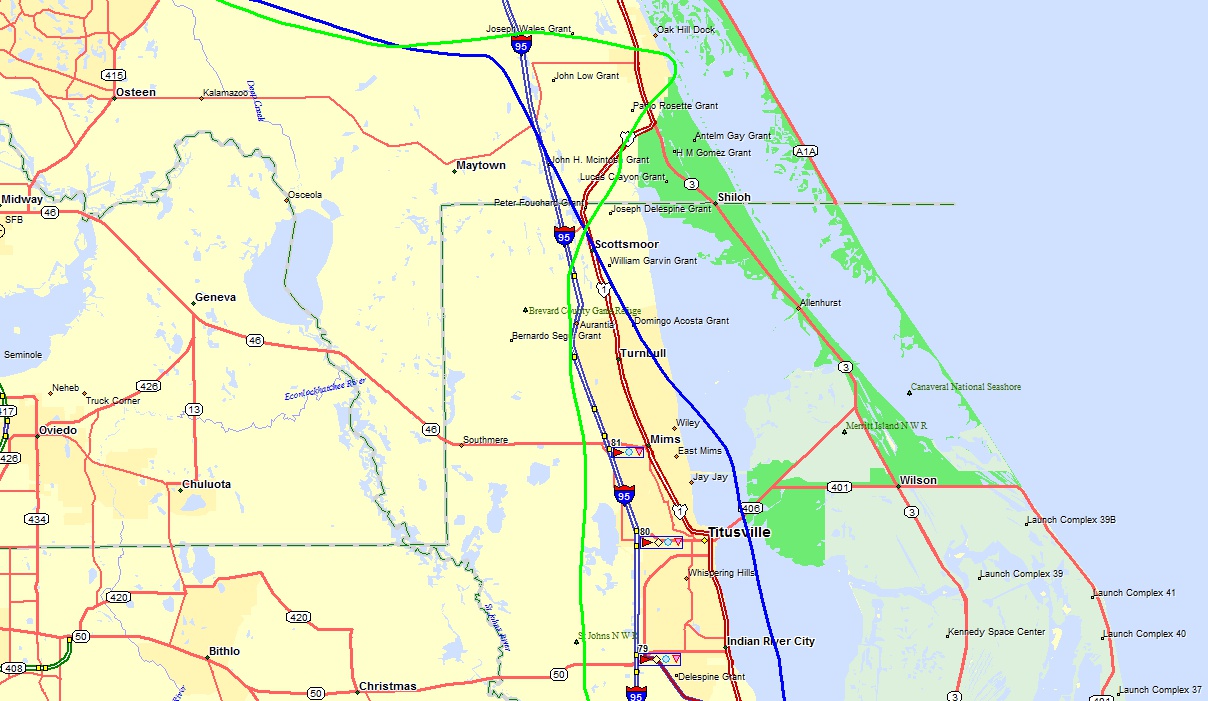 GPS ground tracks at Rockledge show the northbound departure in BLUE and the return for landing in GREEN. 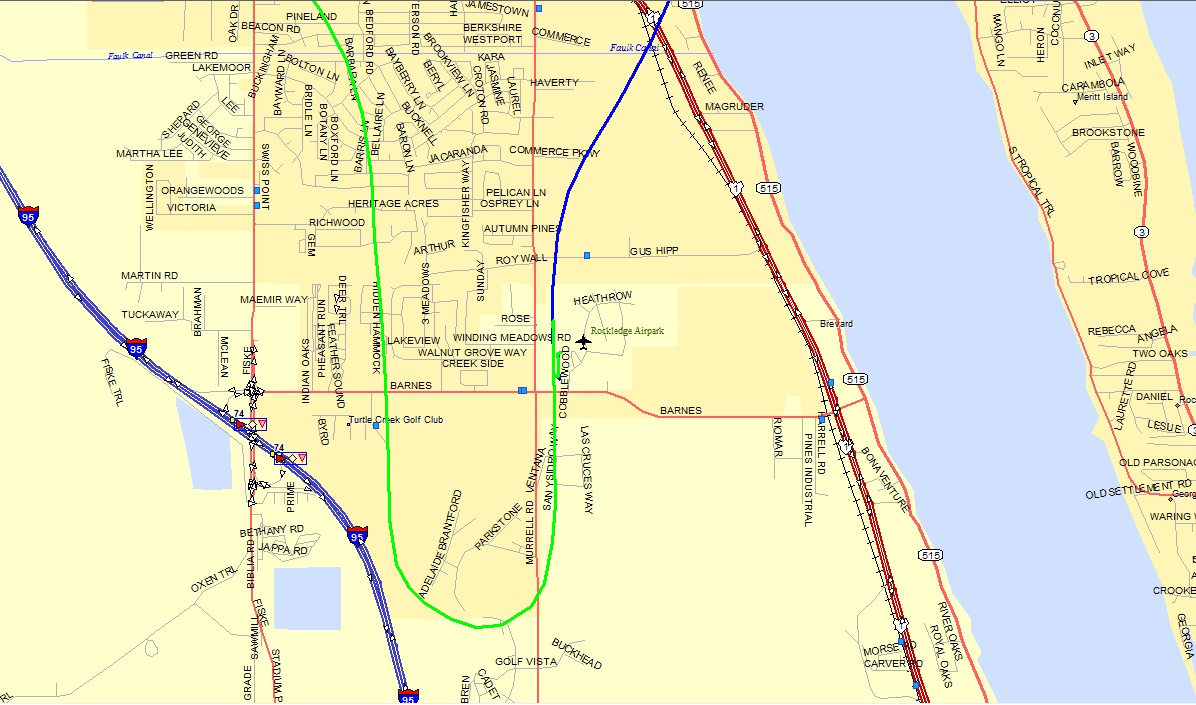