June 2, 2018:  Each year on June 1, the Florida TV weather men and women always talk about the START of the tropical storm season.  This year, one sub-tropical storm came up the west side of Florida in the Gulf of Mexico and went all the way up to Michigan in the LAST WEEK OF MAY.  There were plenty of rainy days in the month of May here in Central Florida.

THIS Saturday morning had no rain with some clouds above 3,000 feet MSL.  I went flying in the southern half of Brevard County to take some photos.  The wind was calm as I departed on runway 36 from the Rockledge Airport with the usual right turn continuing to climb as I fly a mile or two south above the Indian River lagoon then turned away from the controlled airspace of Patrick Air Force Base and Melbourne International Airport.  The area west of Interstate 95 is being developed in an area called Viera.  This area was somewhat swampy but is being groomed for home sites.  When you raise the land for houses, you raise the prices.  You get the raw materials to do this by dredging some of the land creating retention ponds as part of flood control measures required by the Saint John's River Water Management District.  Folks from up north pay more for waterfront property for their new home.  Florida has excellent mosquito control in most inhabited areas across the state. 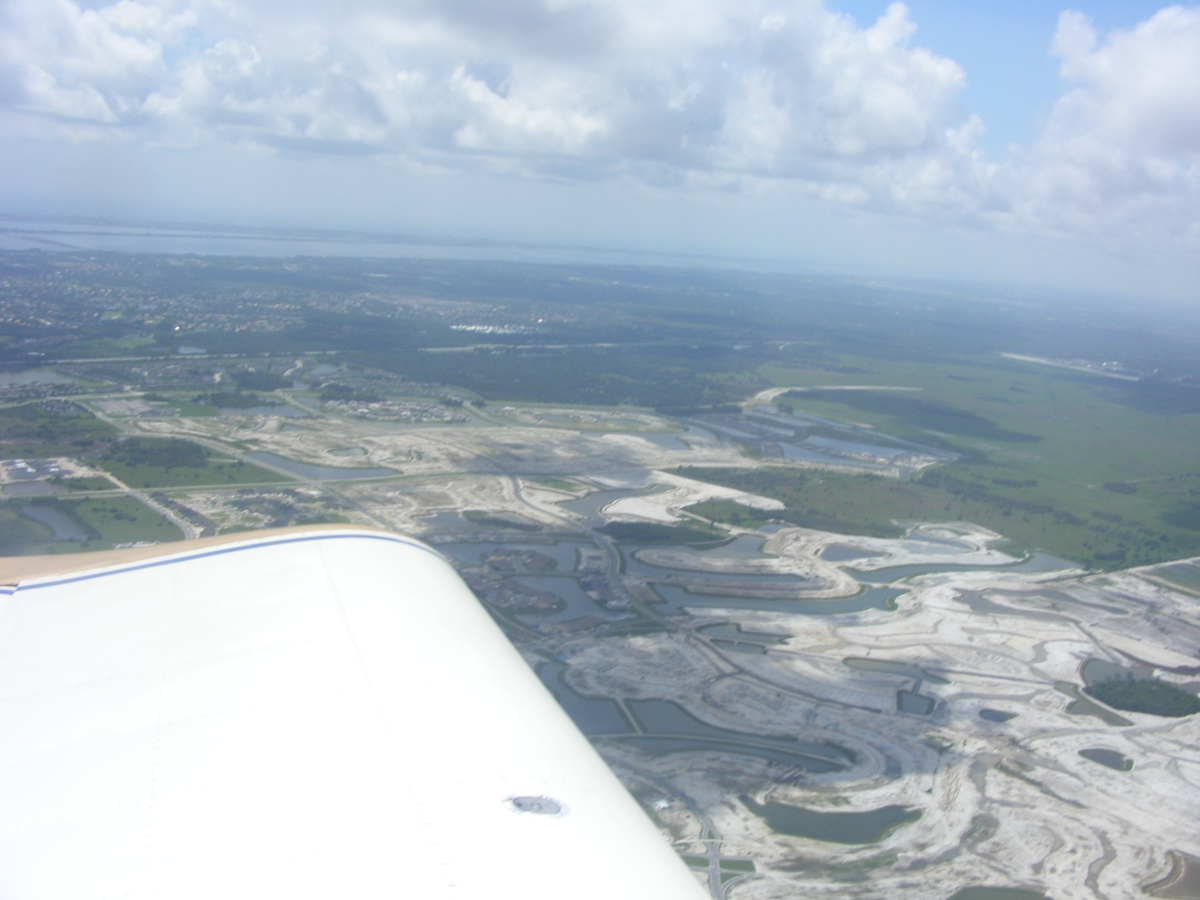 I always listen to the Melbourne control tower when I am in this area.  There was a Delta Airlines jet departing as I flew south past Lake Washington this morning.  I heard him on the radio when he was on the ground and sighted the airliner climbing above the cloud layer a few miles ahead of my location.  The pilot maintained VFR clear of the clouds to insure a smooth ride for the passengers as the airplane headed for Atlanta International Airport.  I maintained about 2,500 feet MSL as I turned EAST and followed the Melbourne Tillman canal that passes just south of where I live in Palm Bay, Florida.  Here is my first of two images taken of the developing housing project that is just north of my home. 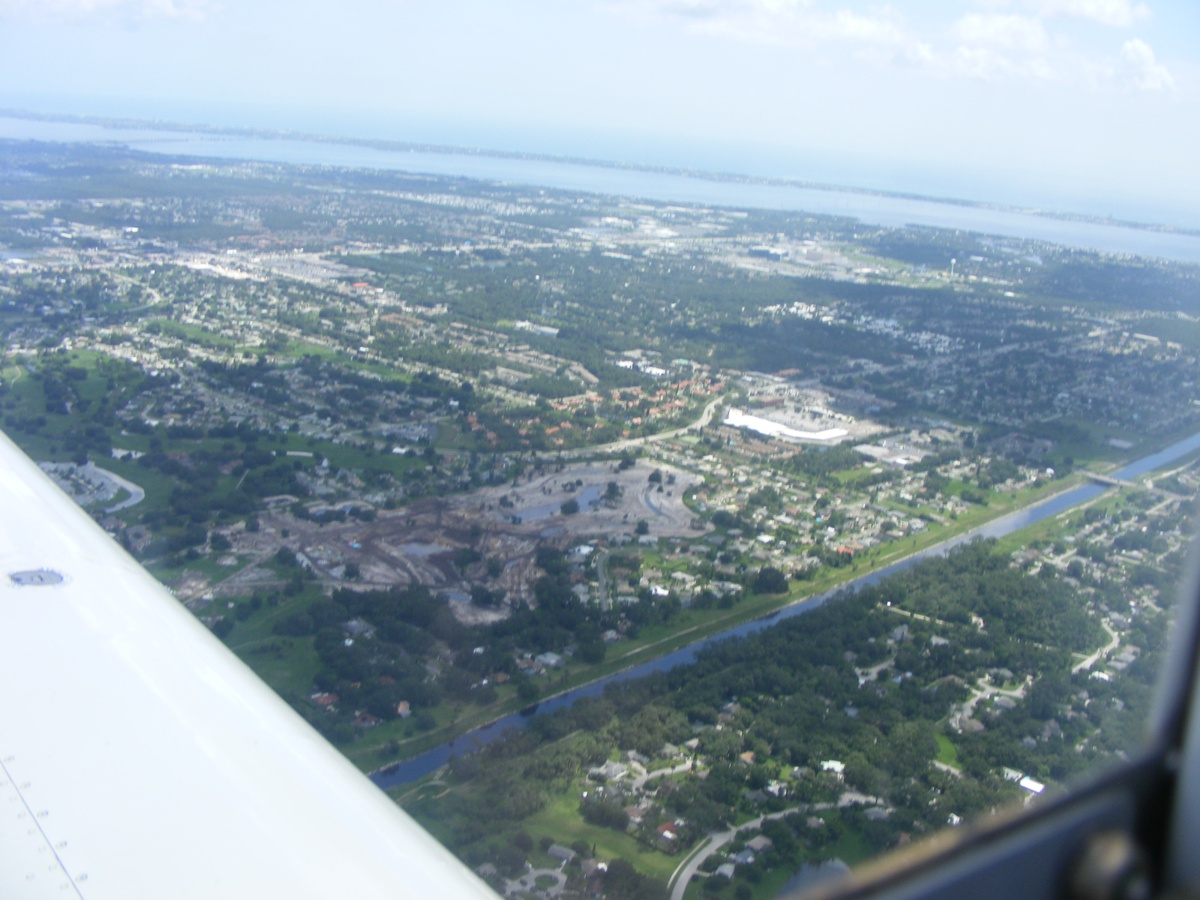 This image is clipped from the big picture above.  The 1351 marks the location of the house I have leased since September 2013.  The outline shows the area being converted from an abandoned golf course to home sites.  The work began in January 2018.  Today is the first time I took any aerial photos of this project.

Here is part of the second image I snapped in the flyby.  The construction crew has not been working much this week after the Memorial Day holiday.

Here is the street map for this photo pass near the construction area.  My GPS ground track is the thin blue line crossing I-95 the turning south. 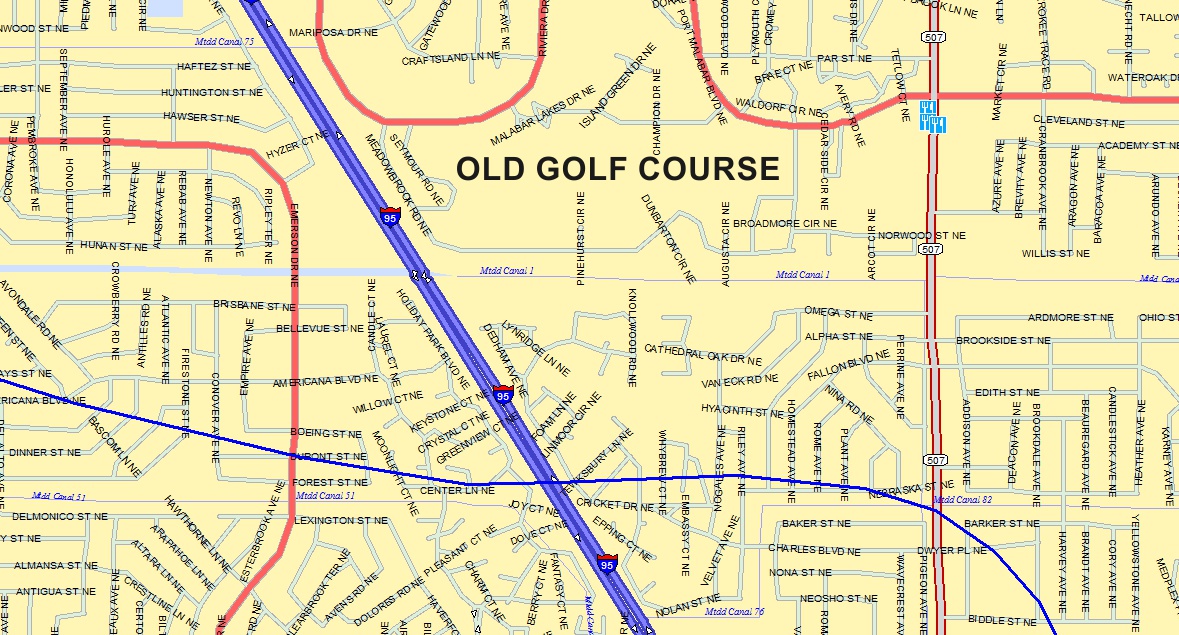 I am heading down south of Palm Bay to get a few photos of a new I-95 interchange under construction near Micco and Grant which are areas on US 1. 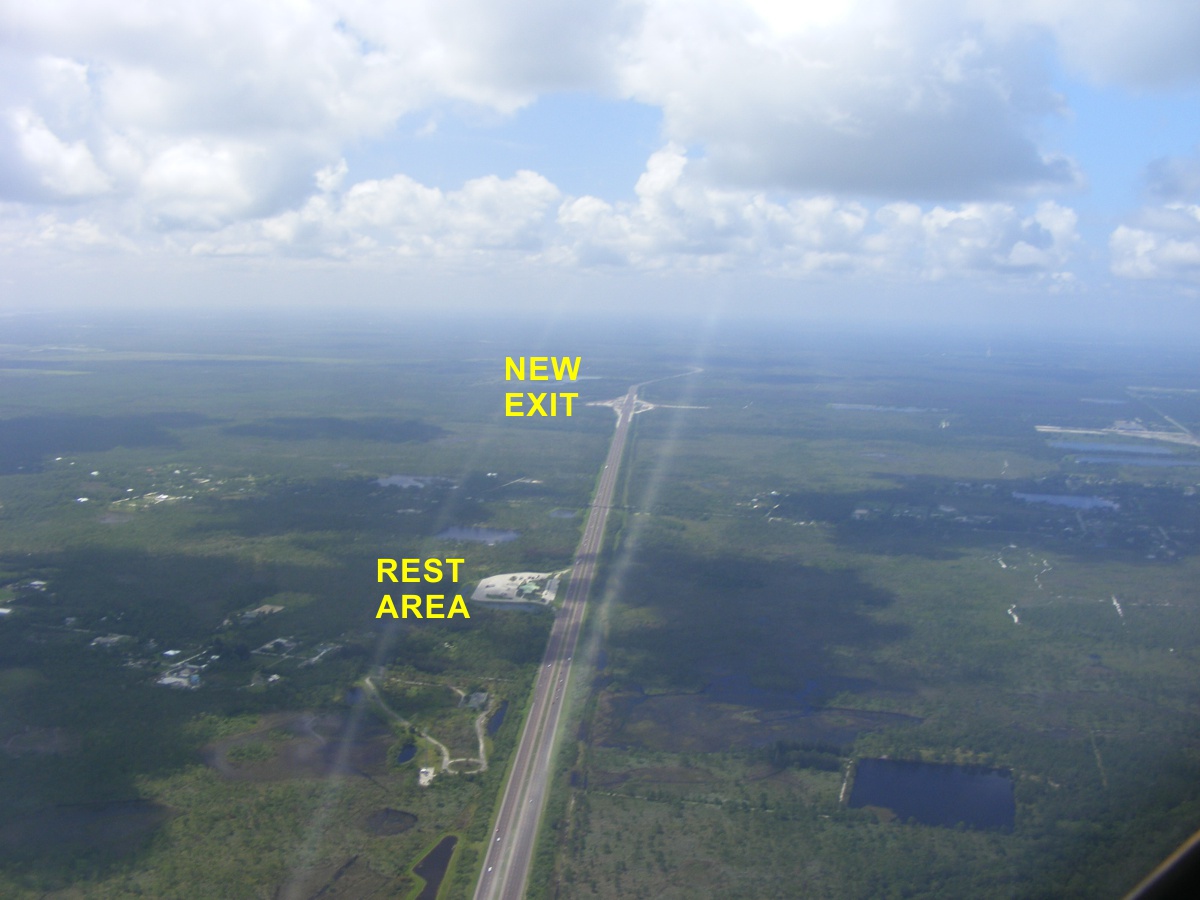 The Valkaria Airport is seen in front of my left wing adjacent to US 1 near the Indian River Lagoon.  I came back here later for a touch-and-go landing on runway 28 before heading home for the day. 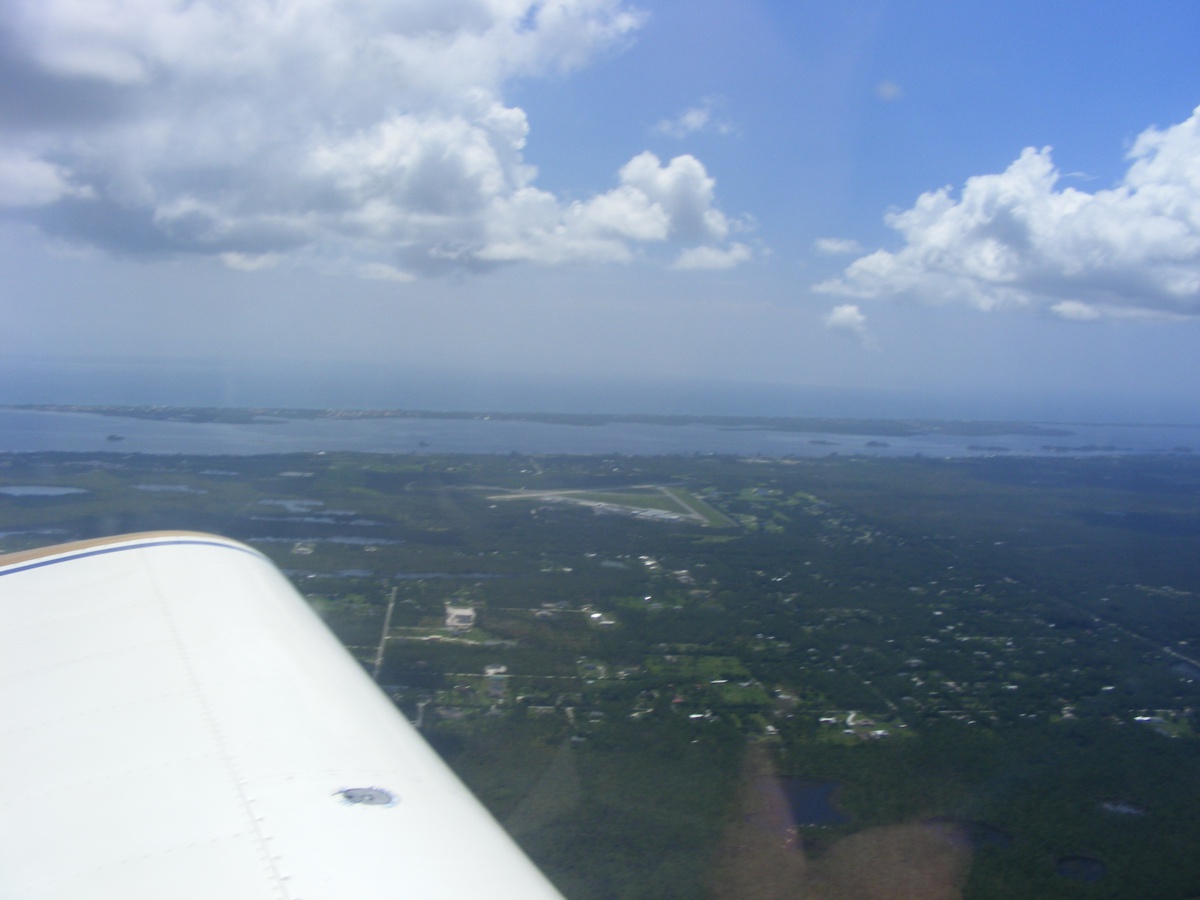 I made one pass by the new interchange and took these next two photos. 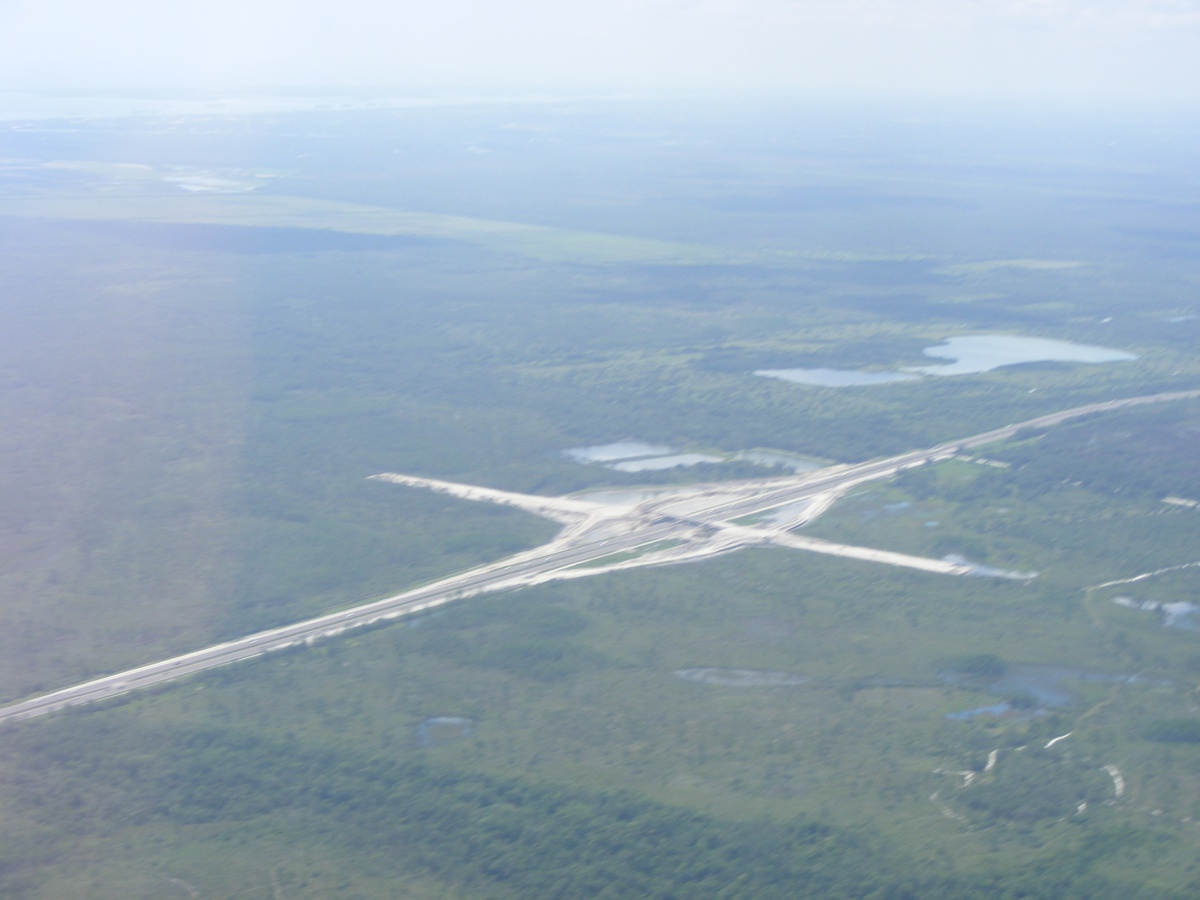 I dropped down to about 1,200 feet altitude to get a better image in the second photo looking northeast across the construction area.  This new road will eventually connect US 1 with I-95 and continue past the south side of Palm Bay and up to US 192 just west of I-95 as a bypass around this area that is still growing. 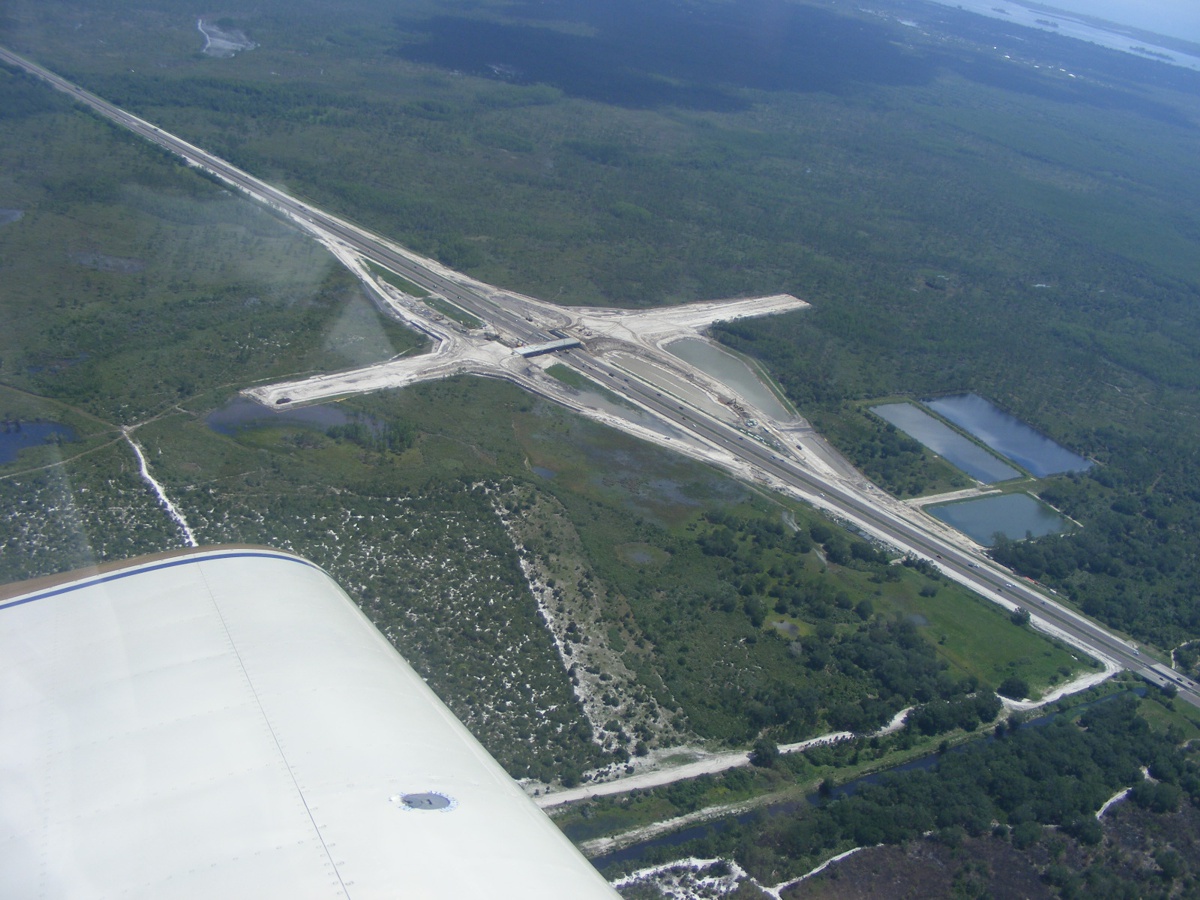 The total flight time today was 0.8 hours with only two takeoff and landings added to my log book.  The Hobbs meter now indicates 420.3 hours total time.

The GPS ground tracks of today's flight are shown here with the pass over the interchange construction area as seen the two photos just above.  I heard another airplane in the pattern at the Valkaria Airport as turned in that direction.  I used a wide downwind in the pattern to be sure I could see him, including extending my downwind leg out over the Indian River to be sure I would not get too close to that airplane.  He did report me "in sight", but I did not see him anywhere during my approach or departure from a touch-and-go landing. 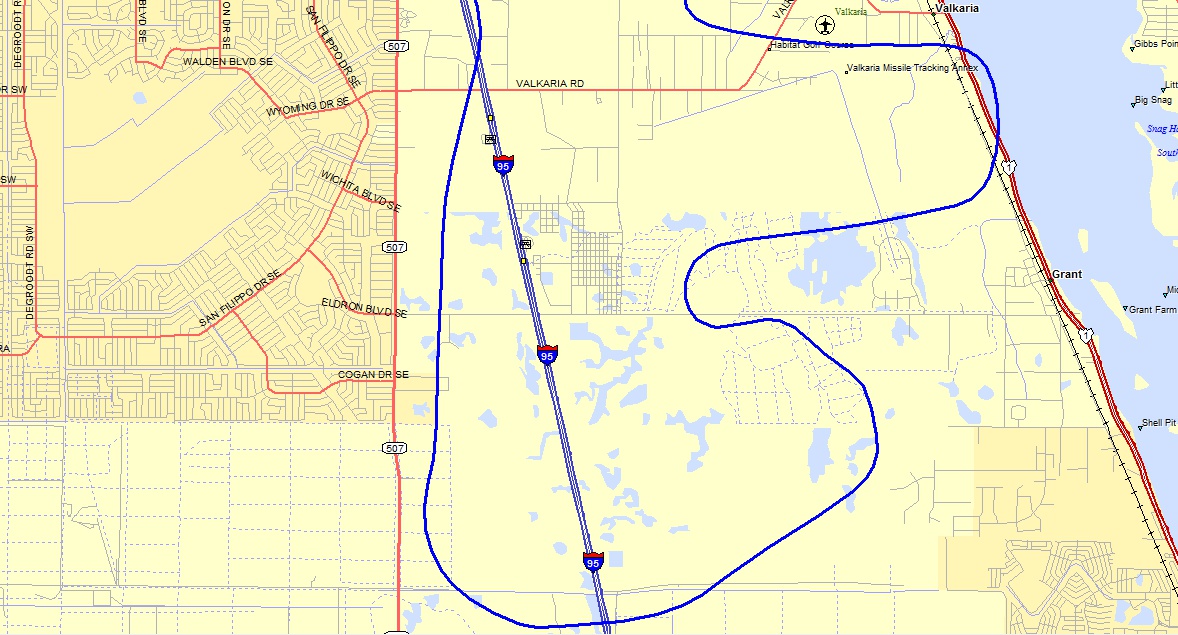 Here is the full GPS ground track for the flight today. 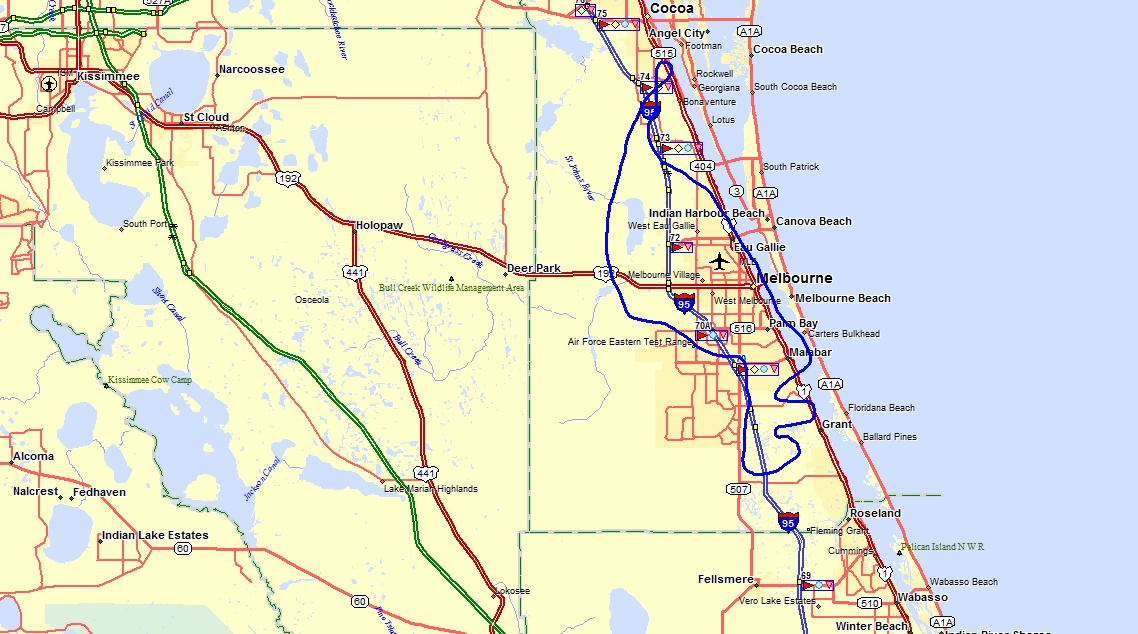 The weather forecast for Saturday, June 9, 2018 here in Florida was inaccurate AGAIN.  "Since when can weathermen predict the weather?" is quoted from Doctor Emmett L. Brown in the 1985 movie "Back to the Future".  The forecast for this day in Central Florida was for rain and storms.  I did not plan to go to the airport for a flight today.  It was a sunny day with all the bad weather over near Orlando this afternoon and some light rain Saturday evening.

My wife's birthday was yesterday, which is also the anniversary of the day in 2005 when Enterprise received an air-worthiness inspection and was transformed from an assemblage of parts into an airplane!  On this day in 2018, I stayed home most of the day to catch up on much needed chores including my weekly grocery visit earlier today.

This page was updated on Sunday, June 10, 2018.  The photo above was resampled and edited from the 320 kilobyte original image taken on June 9, 2005.  I have cropped this next image from the one shown just above.  Rich Nadig is getting ready for takeoff in his RV-3 as he pulls onto the runway to fly chase looking for problems, if any.  You can also see this is the one and only flight made with no wheel pants.  The 25-minute flight that day in 2005 was all about testing basic flight characteristics and to be sure no fluids were leaking from the airplane (fuel, oil, and brake fluid).  Rich reported a clean windshield on this RV-3 flying in-trail behind me while we were in the test area.

I did get to see the latest Star Wars story about Han Solo on Saturday afternoon, June 9, 2018.  With all my references in this post to different time periods, it is imperative that I designate the details of my entry today.  (Mister Spock would say: "Your attention to detail is adequate and precise".  My high-school English teacher from Dalton, Georgia would say I am verbose.