June 17, 2018:  Sunday!  The weather is better than yesterday and I did not have any computer issues as I did yesterday morning (Saturday).  A recent Windows Update changed some details of Internet Explorer 11 that altered the display of Facebook postings.  I found the solution online and was happy to see the browser working as it should again.  By the time I got that fixed on Saturday, it was lunch time and the temperature outside was HOT!  I checked the weather online and the local weatherman in Orlando last night about the weather for today (Sunday).  He had a graphic on screen showing the chances of RAIN for the week ahead and made the statement "This is the way it will be for the next FIVE MONTHS".  The rain chances were from 30% to 90% from day-to-day on his graphic.  If you don't like the WEATHER in Florida, just wait a minute, it will change.

I was out of bed just after 7 AM today with no alarm clock needed.  I went into my office and checked the current weather online.  The computer was working very well today.  I had my usual light breakfast and prepared for the trip to the Rockledge Airport.  The first GPS data point in the airplane was stamped 11:05:56 AM when the Hobbs meter also started while parked in front of the hangar.  By the time I began the takeoff roll on runway 36, the GPS time stamp was 11:11:29 AM.  The last GPS data point was just inside the hangar door at 12:09:26 PM.  Here is what I did in that one-hour flight.

The takeoff was from runway 36 into the light wind with my usual right turn to the south over the Indian River, then climbing and heading west across Interstate 95. I reached 2,500 feet then turned south to pass above the Melbourne Airport as a Delta Airlines flight took off to the east on the shorter runway NINE LEFT (9L).  Nine right (9R) is the longest runway and is still being re-paved. 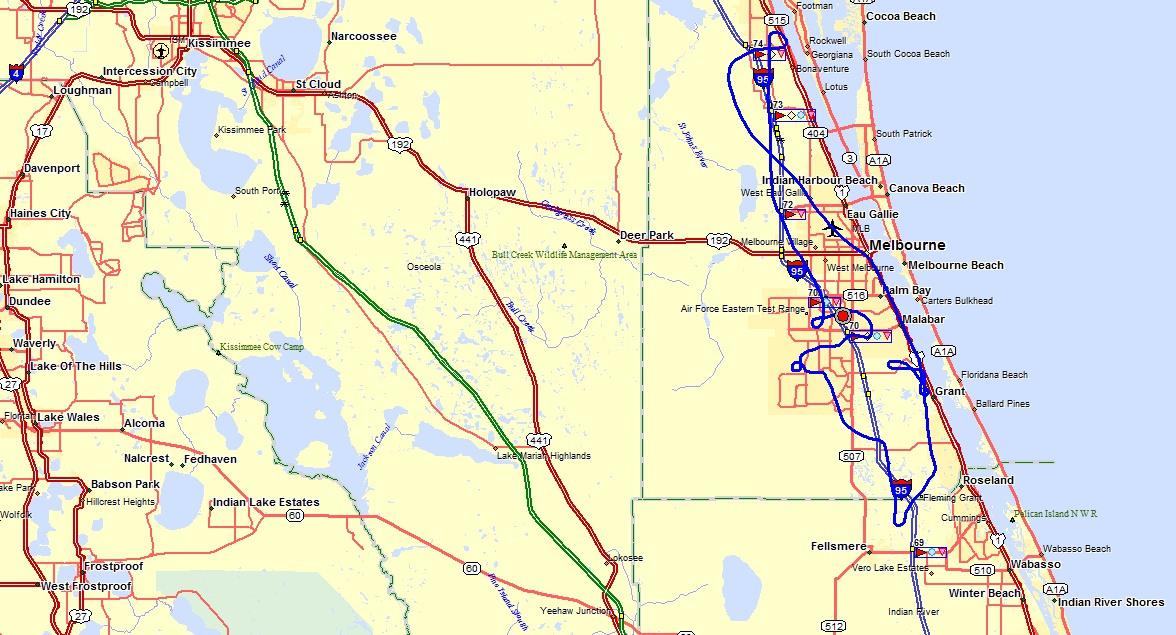 The GPS ground track map shows the south end of Brevard County and the Sebastian area where I had thought about doing a touch-and-go landing.  The radio call from a parachute JUMP PLANE high above the airport and one other airplane in the pattern for runway 5 was a good reason to avoid the airport.  I did see what appeared to be a light-sport airplane flying very low over some wooded areas south of the Sebastian Airport. 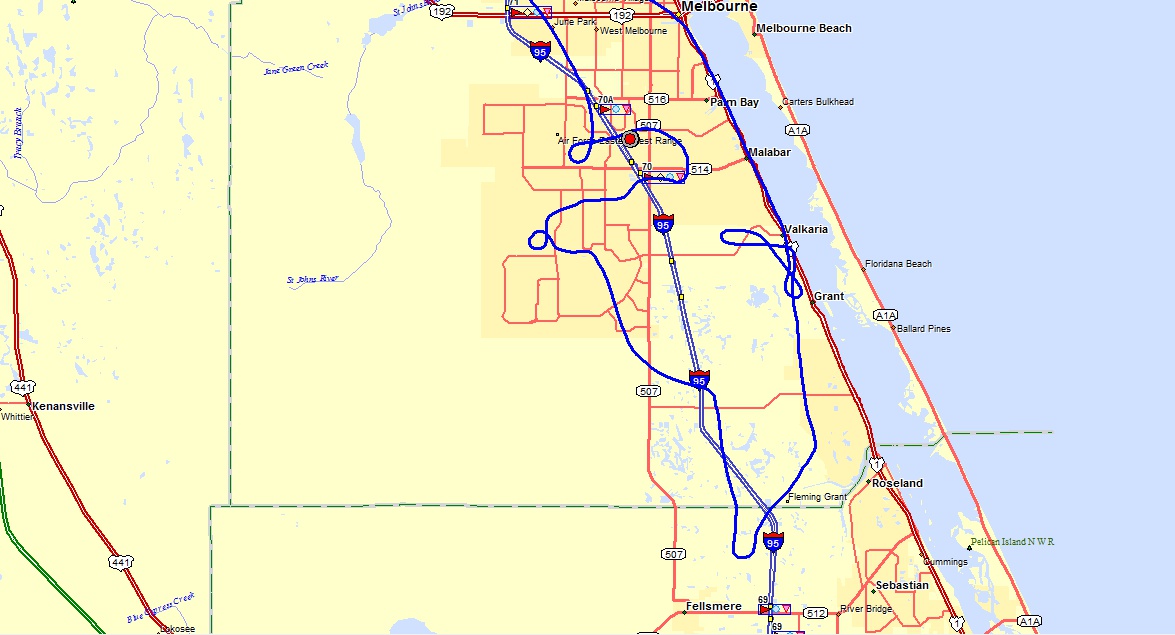 This next GPS ground track map shows where I did a touch-and-go on runway 10 at the Valkaria Airport.  I noticed they only had ONE of their TWO runways open.  The northbound part of the flight is mostly west of I-95 before I made a photo pass on the golf course housing project just north of the RED dot that marks the location of my home.  All those other turns on the north bound part of the flight gave me a different look at streets I drive on from time to time. 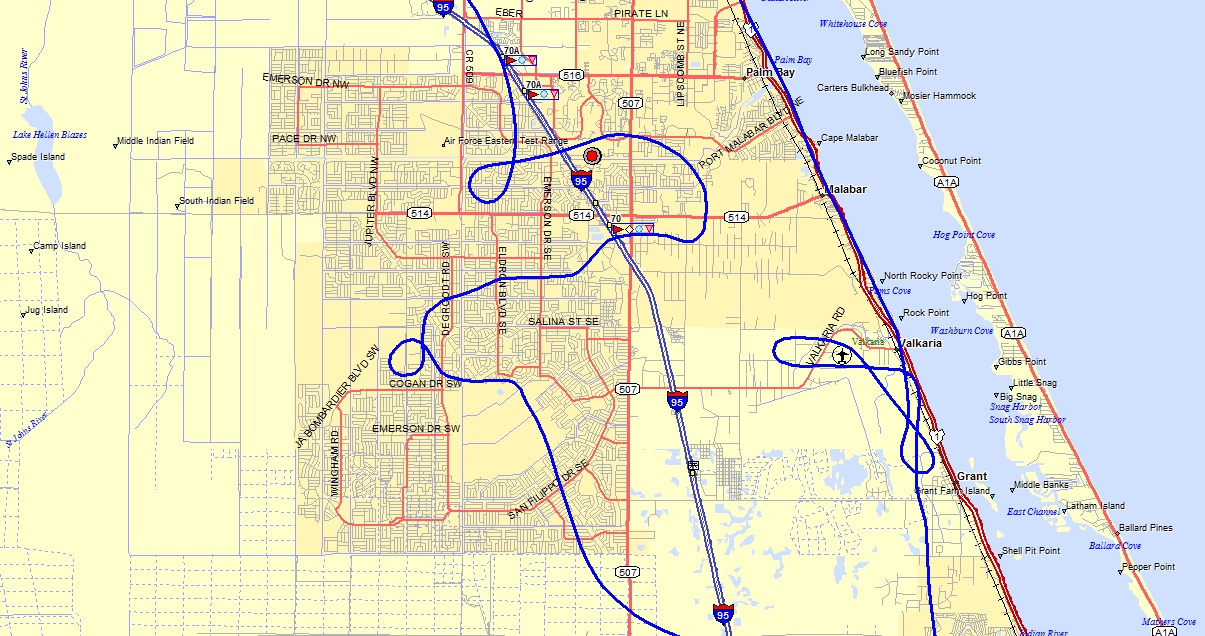 Babcock Street highlighted below is state route 507 seen in the map above crossing I-95 on the way north to downtown Melbourne.  The Melbourne Tillman Canal drains a lot of farmland out west of here and is part of the Saint Johns River water management district flood control infrastructure. 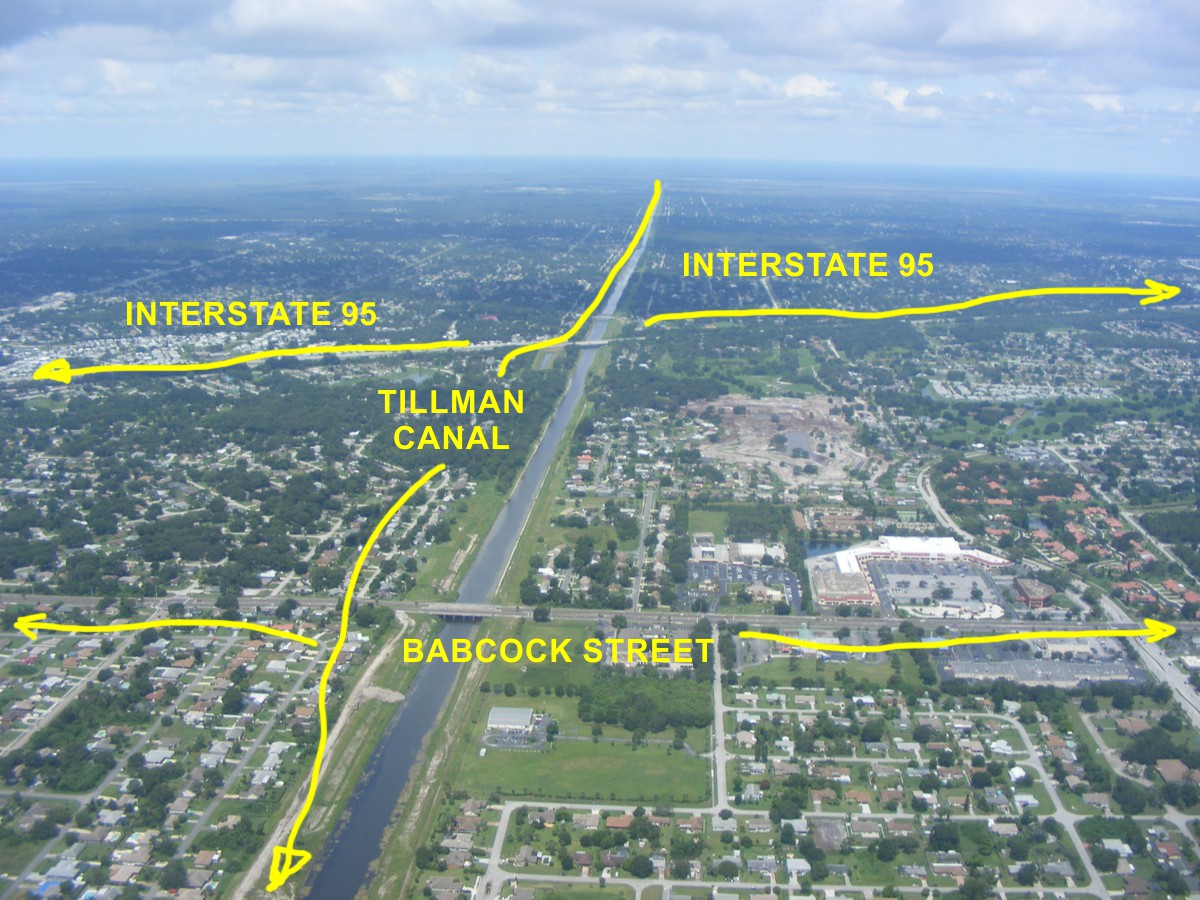 I have lined up for a photo pass along the NORTH side of the old golf course construction area on today's flight. 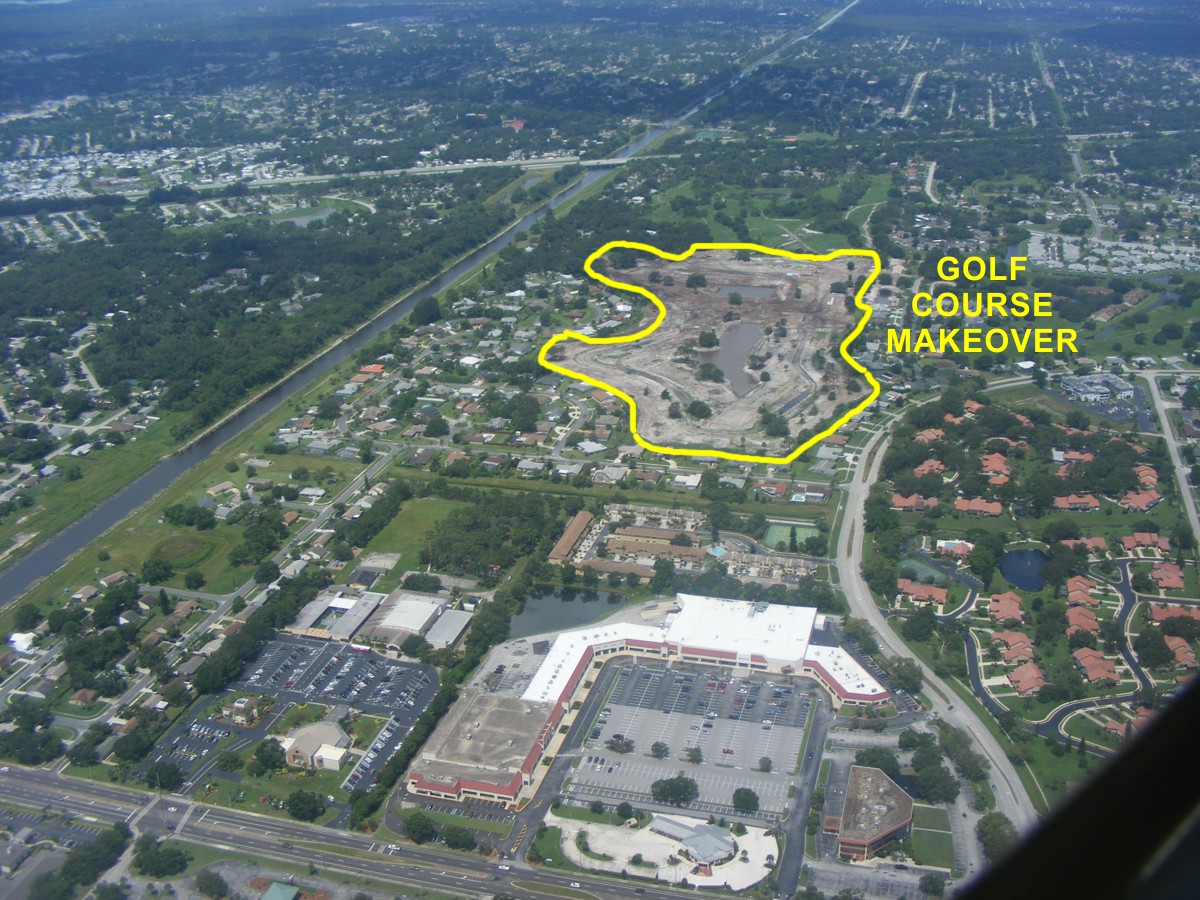 This photo was about as close as I could get over the site and not leave anything out.  These are "point and shoot" photos and hope you get it right! Here is a cropped section from the photo above with a little more information.  The house where I live is hidden by big OAK TREES. The old putting green directly behind the house is becoming two building lots for new homes.  The GPS guided bull dozer lays out the roads.  The surveyors add the precise locations of the sanitary sewer system components. The storm drains will empty into the Tillman Canal. 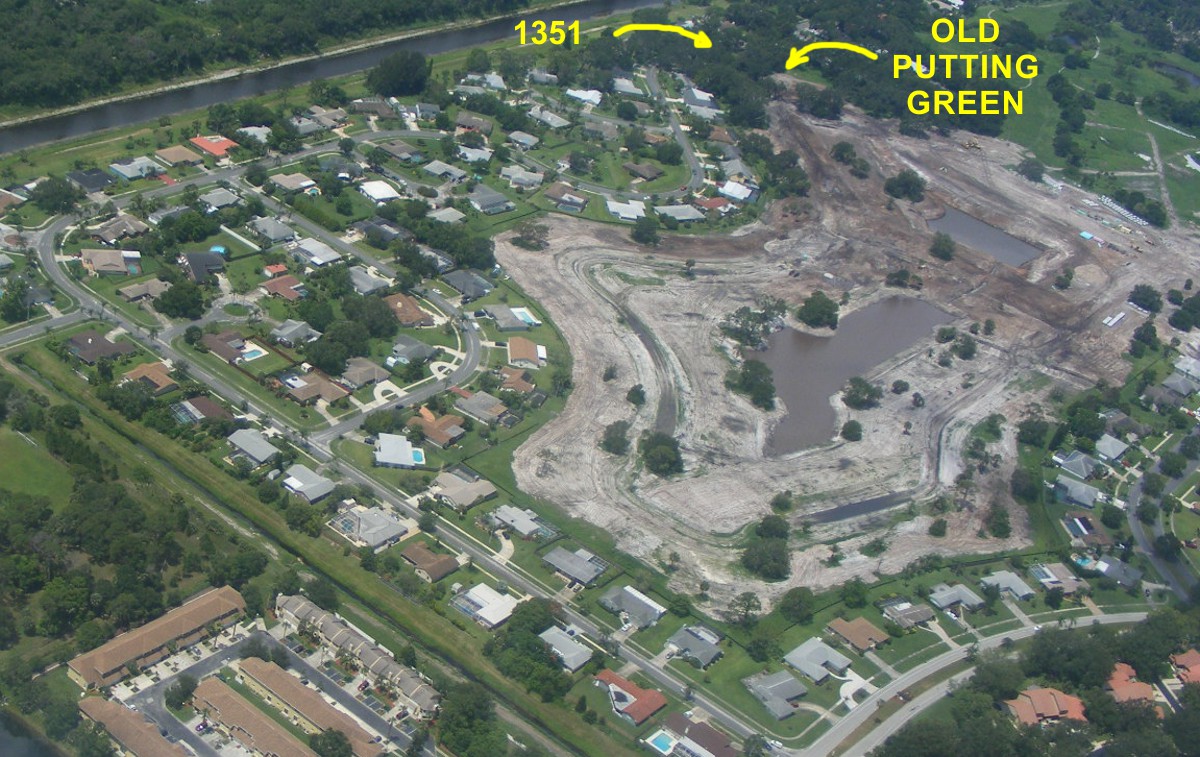 This map below is the site plan for part of the construction area seen in the photo above.  The original retention ponds from the old golf course have been re-shaped to allow for home site lots. 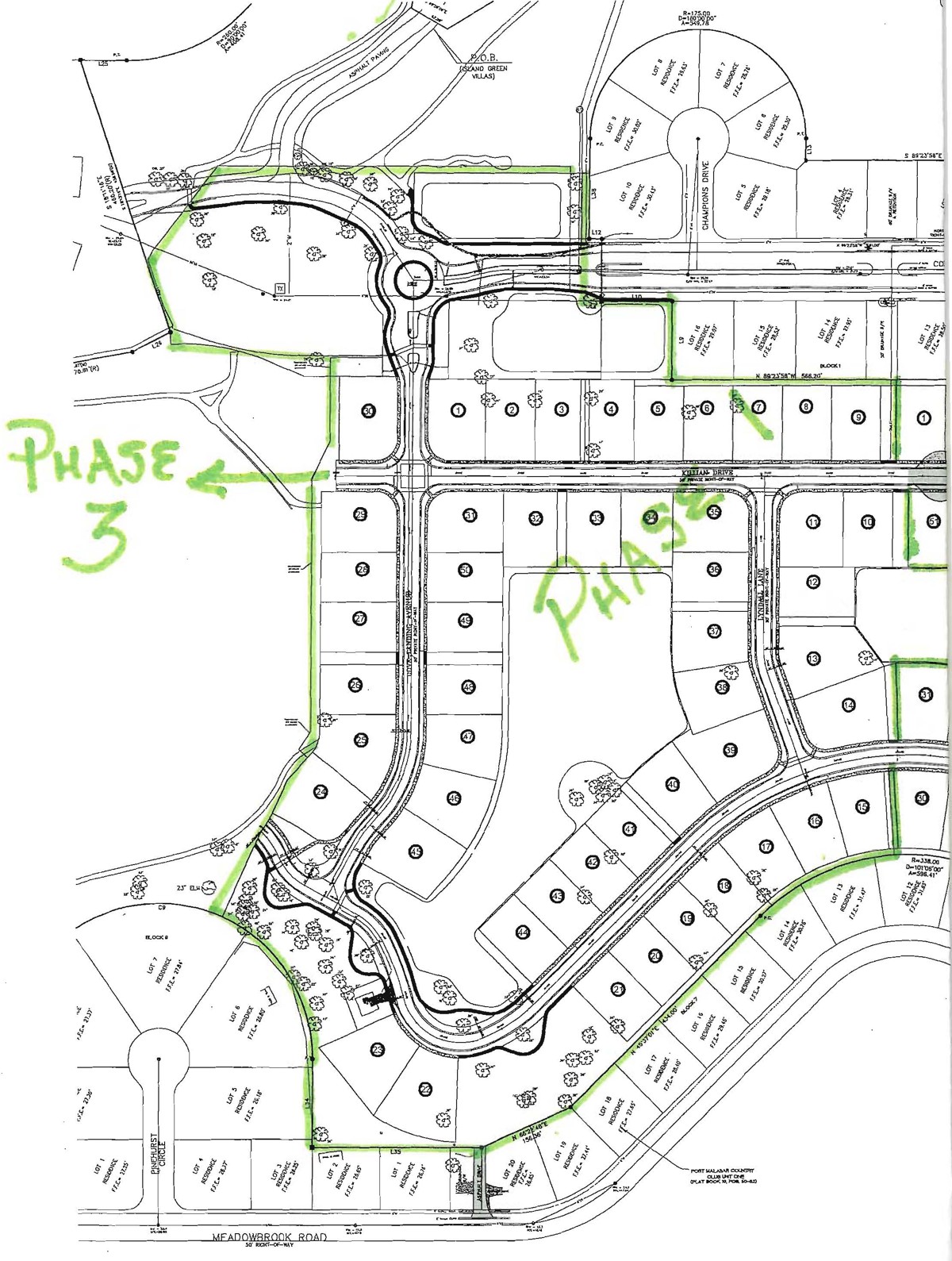 After the photo shoot of the old golf course, it was time to head back to the Rockledge Airport.  I climbed up higher than the Melbourne Airport Class D airspace and stayed west of I-95 until I was past the Patrick Air Force Base Class D and lining up for my approach to Rockledge. This is a photo segment cropped from the wide-angle photo above.  Another new interchange is being built in this end of Brevard County.  Murrell Road runs parallel to the Rockledge Airport runway. Billy told me about using the southbound lanes for an engine-out forced landing.  Viera Boulevard is the main East/West road in the middle of Viera connecting US 1 to the major North/South streets all the way to the western edge of the developed area and the natural land to the west. 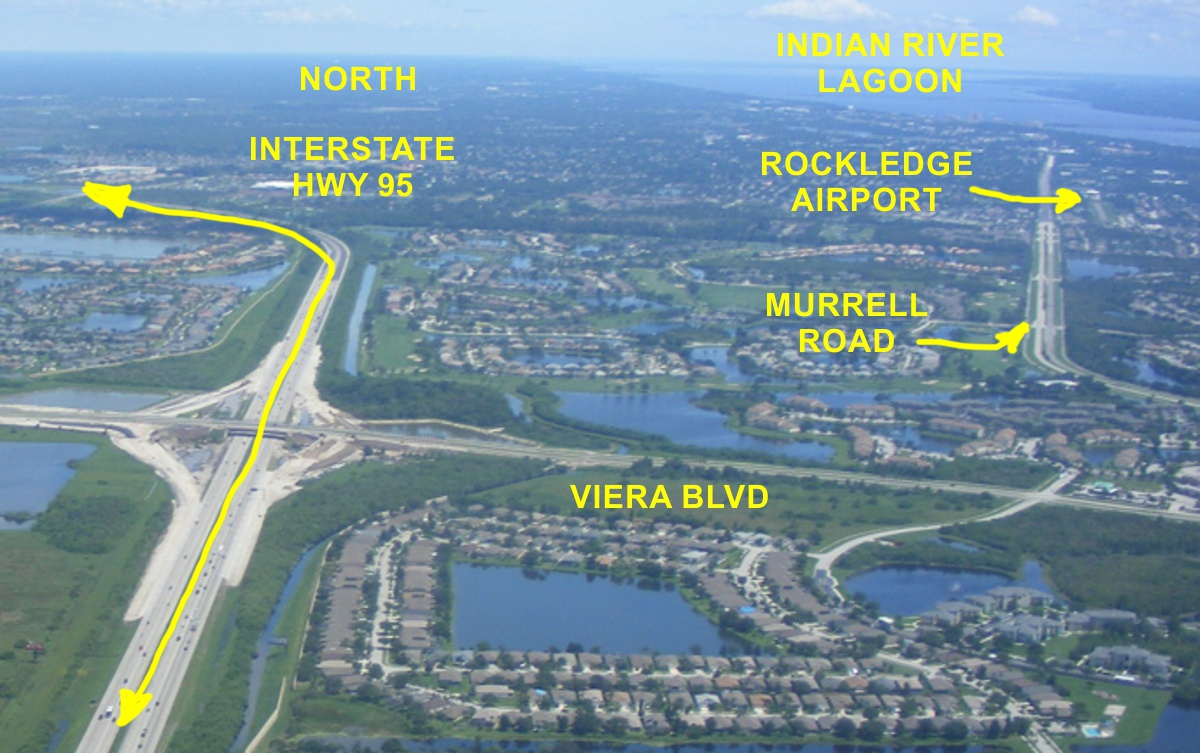 The overpass for Viera Boulevard has been here for a number of years.  This year an interchange is added to the interstate highway with the new "on ramps" and "off ramps".  This will relieve the traffic congestion of the exits on the north side and south side of Viera.  This photo is taken from about 500 feet above ground while on my approach to the Rockledge Airport. The photo above shows how all the neighborhoods have water retention ponds for flood control when it rains very hard.  Just a little bit of cropping of the image above gives a different "feel" to the housing area at the bottom of the photo below. 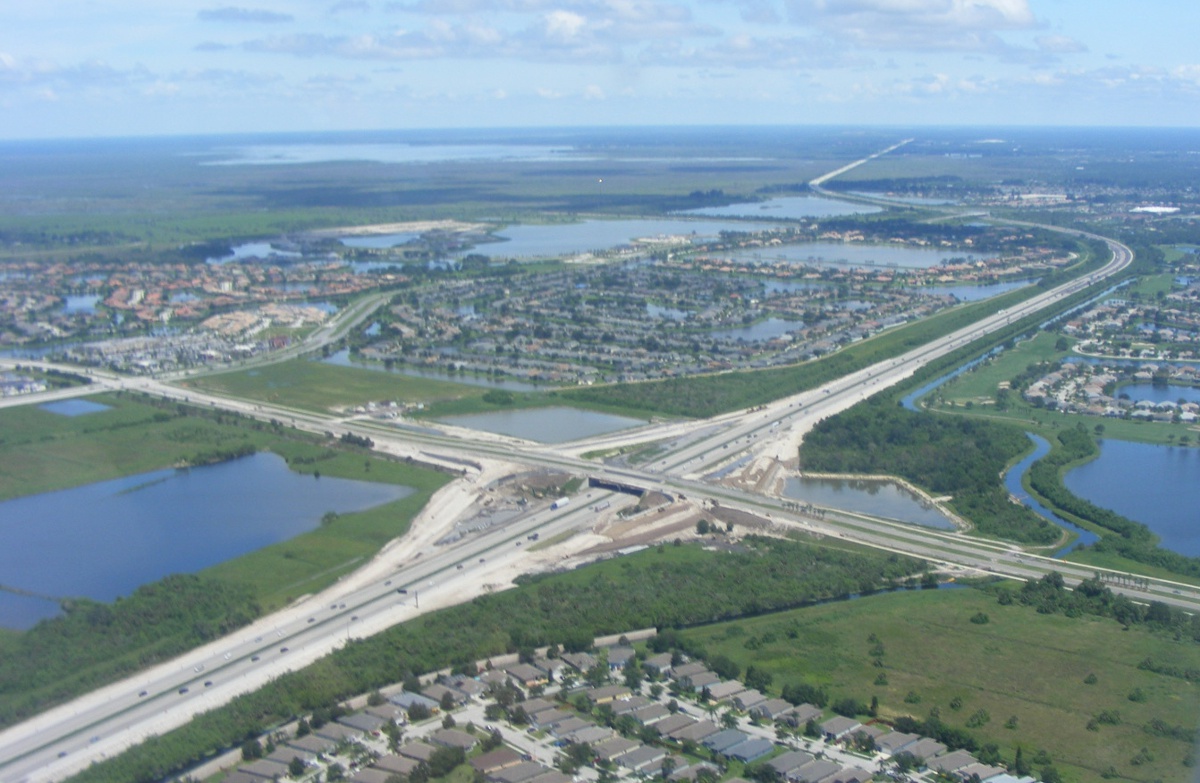 The nice part of having only three airplanes and an auto-gyro in the hangar allows me to taxi into the hangar door onto the FLAT floor.  My airplane can then be turned virtually in the space of it's wing span. 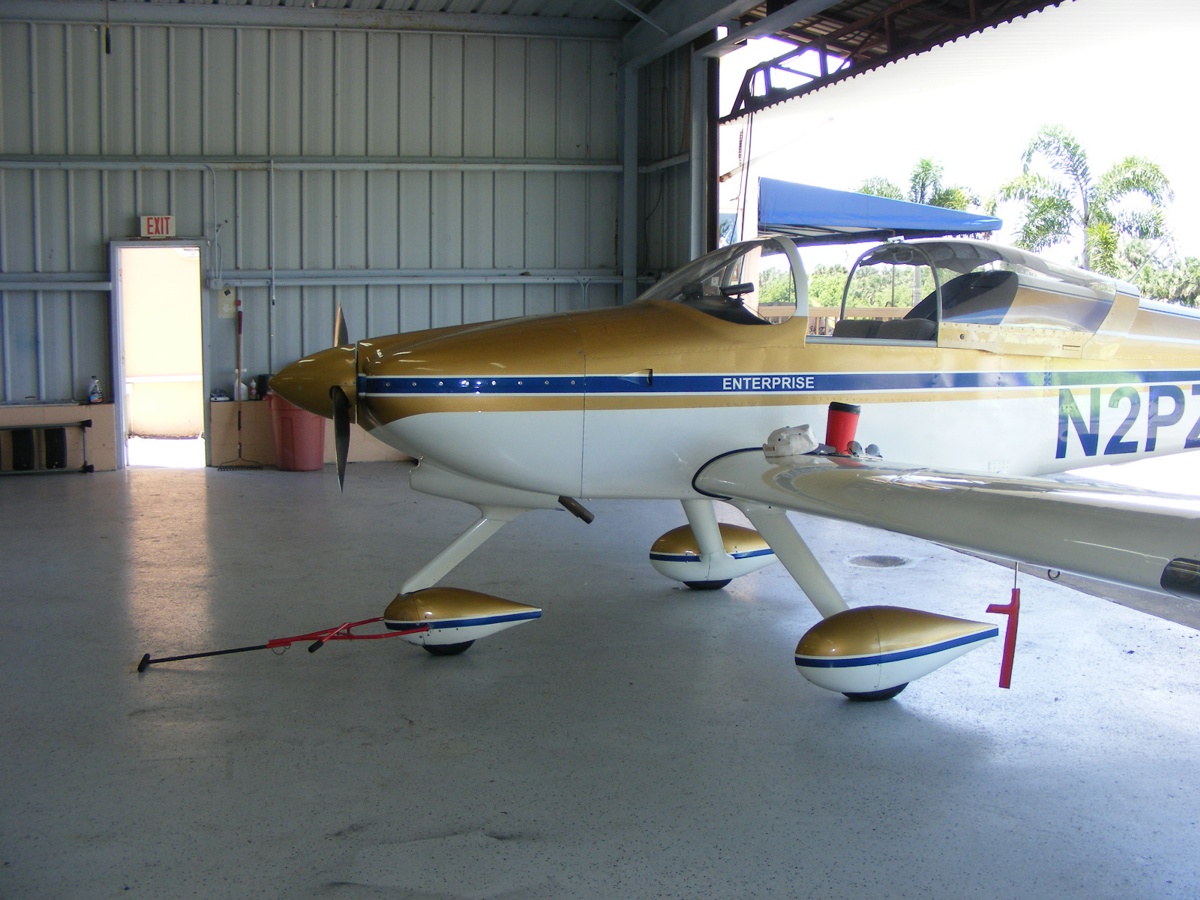 The "turn around" and a push with the tow bar will put the tail of my airplane in that corner. 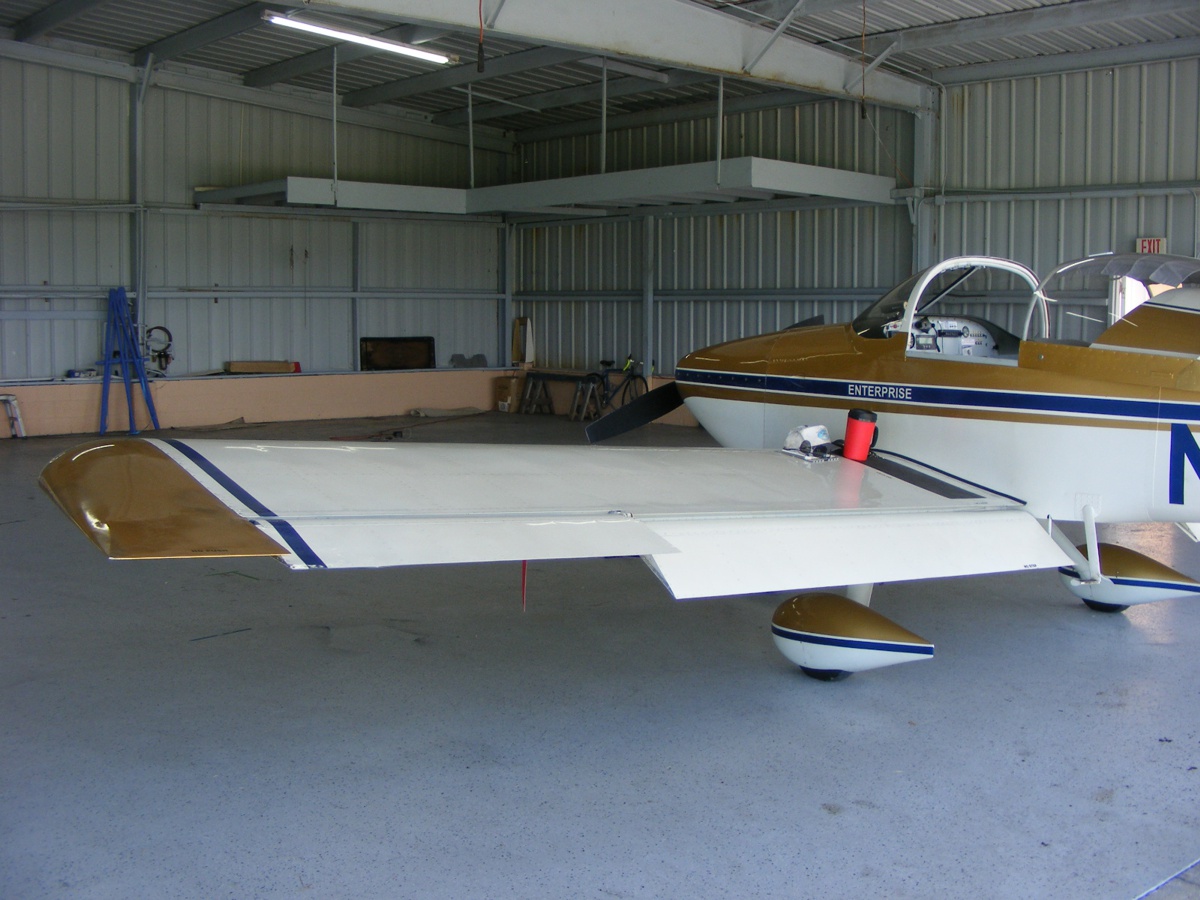 One hour gets added to the Hobbs meter today before I head over to Wendy's for lunch.