March 10, 2018:  Saturday and hazy but still VFR weather today.  Billy was washing the dust out of the hangar when I showed up to go flying today.  I offered to delay my flight, but he would have nothing of that.  He was moving the aircraft out of the hangar anyway.  I helped push the Aventura II out on the ramp just north of the hangar door.  He pushed the gyrocopter out near the FBO front porch and I pulled the "Enterprise" out to the front of the ramp facing south at an angle that would not blow dust toward the hangar as I taxied over the grass to the paved taxiway.  The flight today was to practice takeoff and landings at nearby airports.  The departure from Rockledge had some turbulence as I climbed above the trees alongside the north end of the runway.  I thought it was all crosswind, but there turned out to be a tailwind component.  The full 160 horsepower of the engine and 28-foot wingspan cleared the buildings north of the runway by about 300 feet.  This image shows the entire flight path to Merritt Island Airport (KCOI) and up to the north end of the Indian River Lagoon past the Tradewinds grass strip, over to the Arthur Dunn Airpark (X21), then over the top of Titusville Executive Airport (KTIX), with the return to Rockledge (21FA). 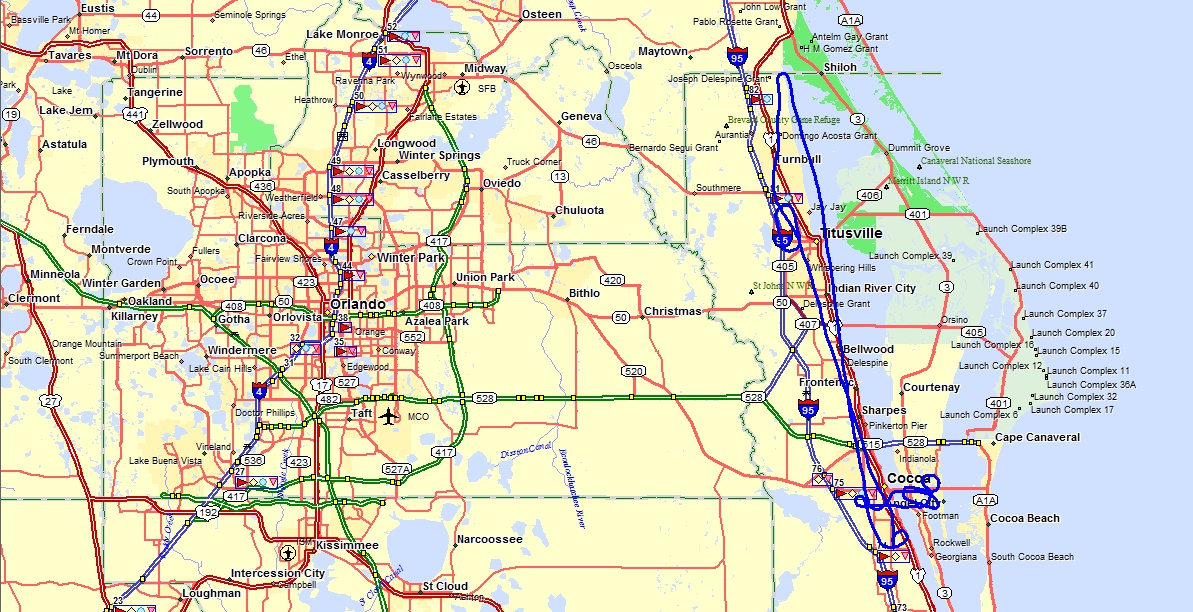 Here is the GPS ground track from Rockledge for my touch-and-go at Merritt Island.  The takeoff was to the north with a climbing right turn toward the west crossing the field at 1,300 feet MSL.  When I first turned south down the river, I could see all the way past the Melbourne Airport and noticed the very thick haze down that way.  I finished the turn going north parallel to I-95 and climbing for enough altitude to pass over the Titusville Airport above their Class D airspace.  As I looked toward the Merritt Island airport, I tuned up their CTAF and decided to go there for a touch and go on runway 11, straight into the prevailing wind.  I heard one Cessna getting into the pattern for a full stop landing as I flew over the field at 2,800 MSL and then north to descend to pattern altitude before entering the left downwind leg for runway 11.  After the touch-and-go landing, I climbed up and turned west to depart the pattern and head north along the river and above Titusville airspace. 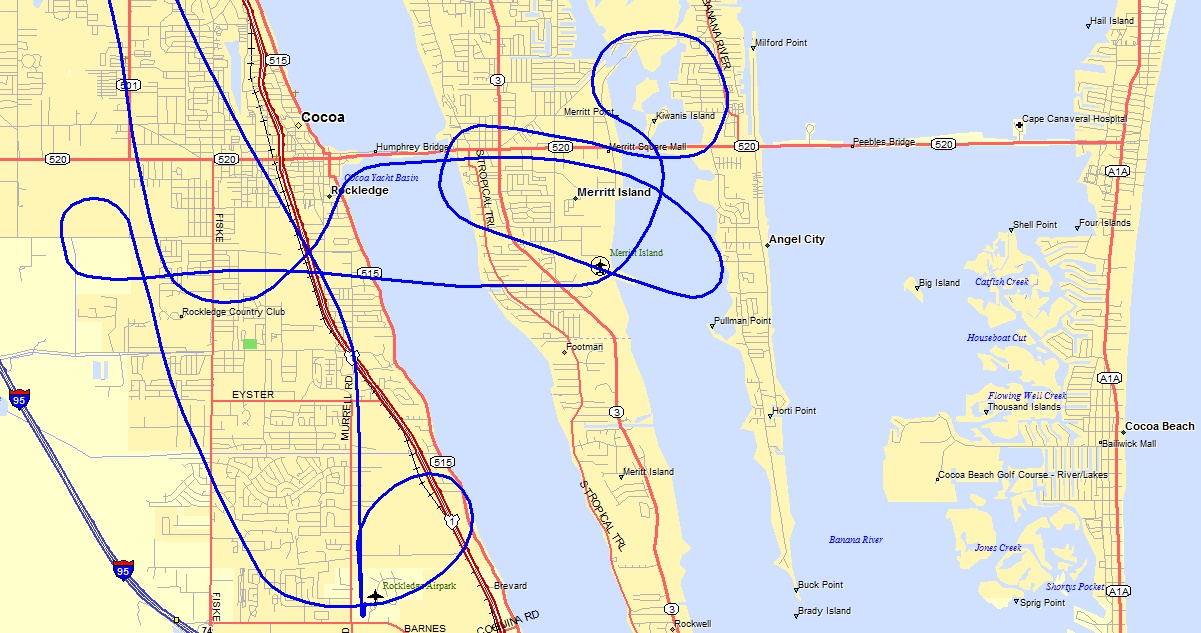 The ground track up the river took me to the county line seen in the first map above, then a descent down to 1,500 feet MSL for the pass just west of the runway at Tradewinds before moving closer to I-95 to make a straight in approach to runway 15 at Arthur Dunn where nobody was home today.  The overcast kept the parachute jumpers grounded. 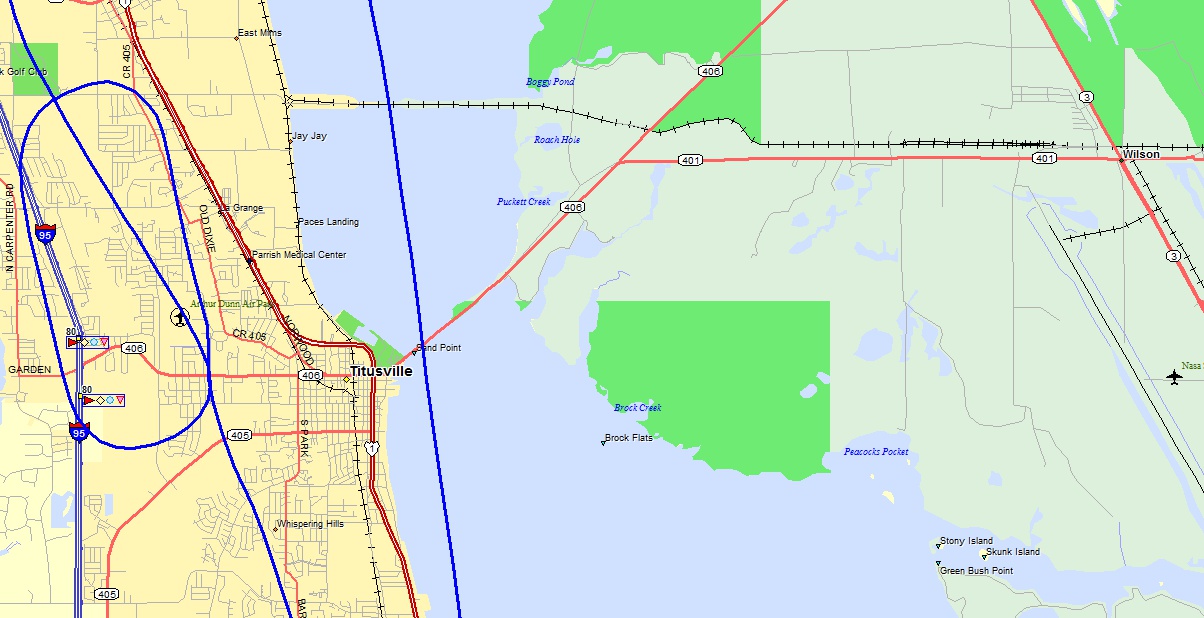 The end of the flight was with some bumpy crosswind component until I descended below the tree tops for runway 18 at the Rockledge Airport.  The hangar floor was still wet in some areas after my 1.1 hours of flight.  I helped push some of the water out the south door. 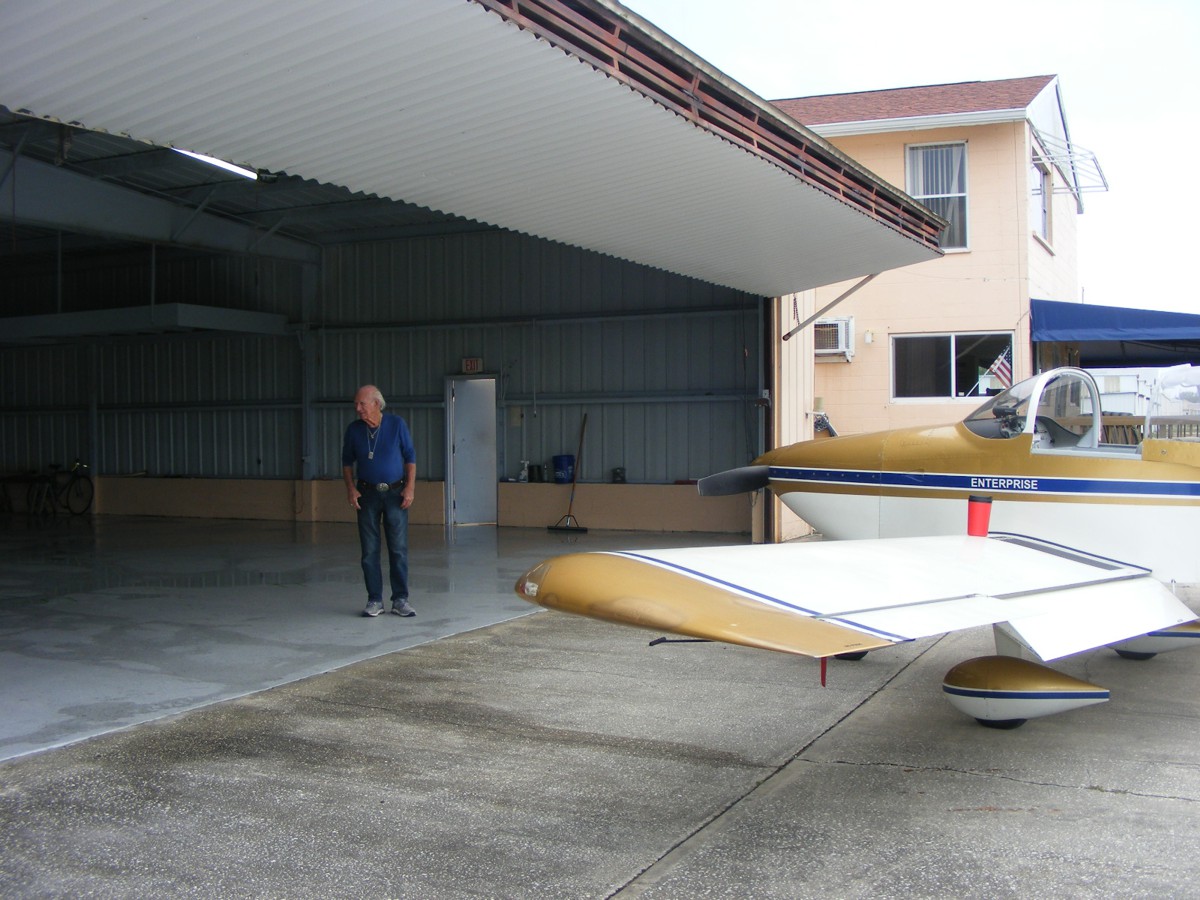 All the flying machines are now back where they normally are stored.  Billy flies the Aventura II and does light sport training in it and the Faeta seen at the far left of this image.  Both of these airplanes and the gyrocopter are powered by Rotax engines. 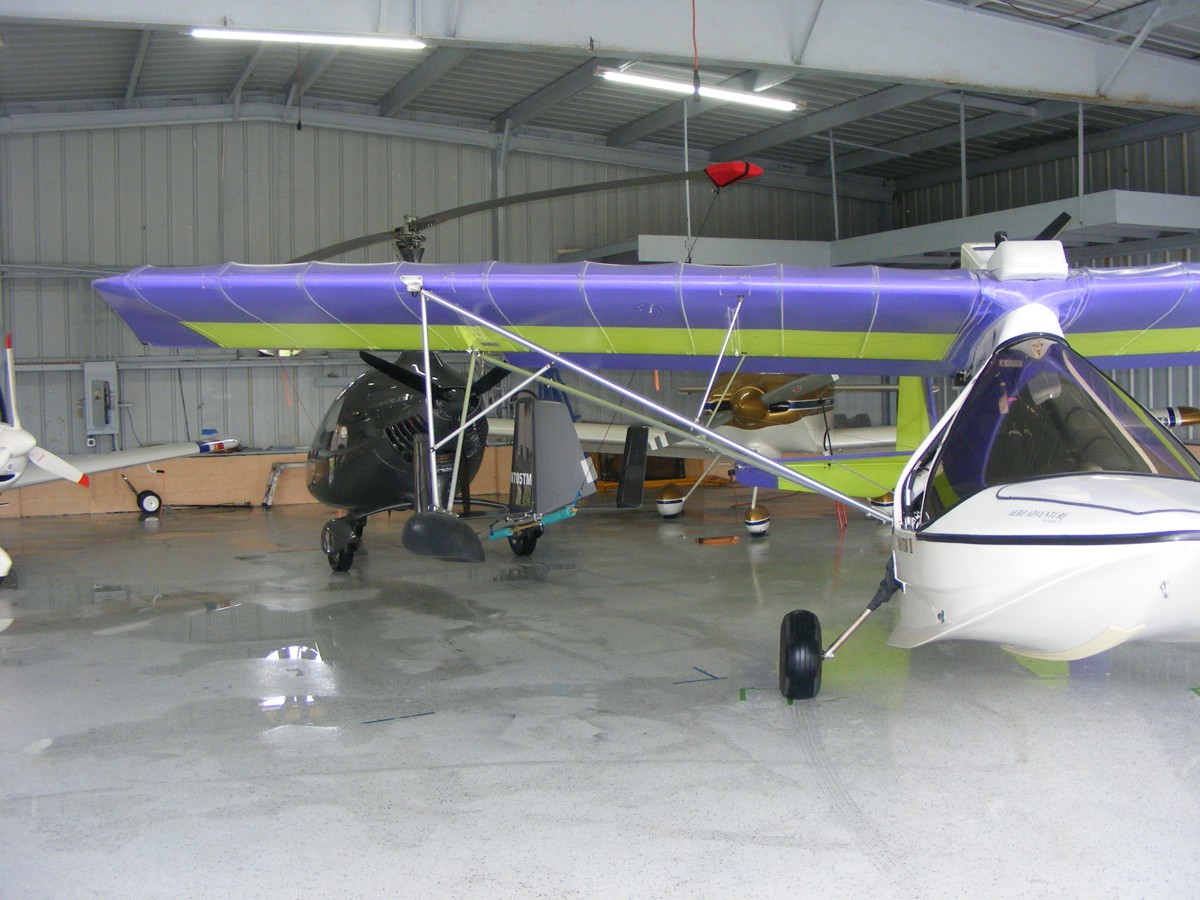 My RV-9A is closed up and plugged up to keep the battery charged. 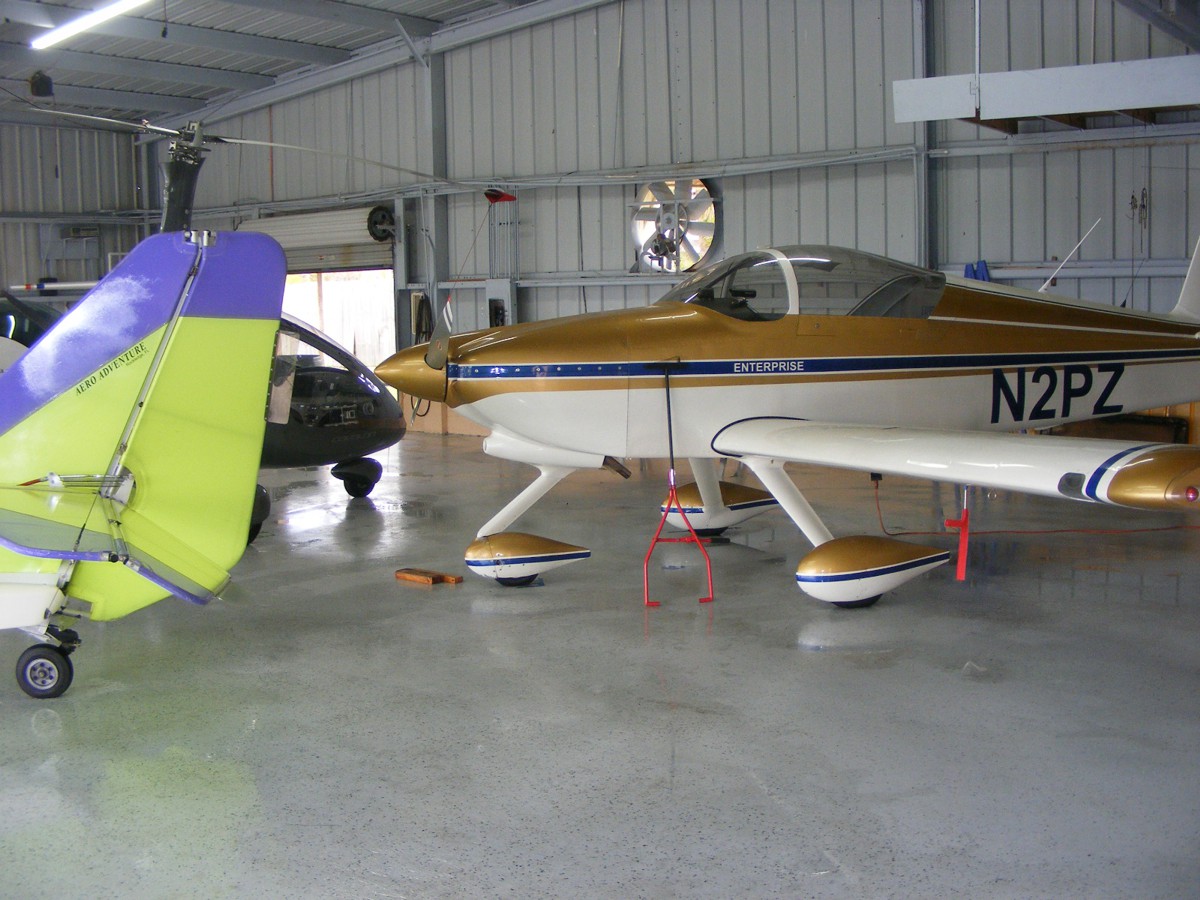 With the water on the floor, the high (dry) and low (wet) spots were clearly indicated.  I moved the 50-foot power cord up along the top of the block wall at the south side of the hangar until I reached the southeast corner.  From there it was a straight dry path to the right step behind the right wing where my trickle charger is suspended with safety wire.  No tangles in the walk area near the door on the south wall. 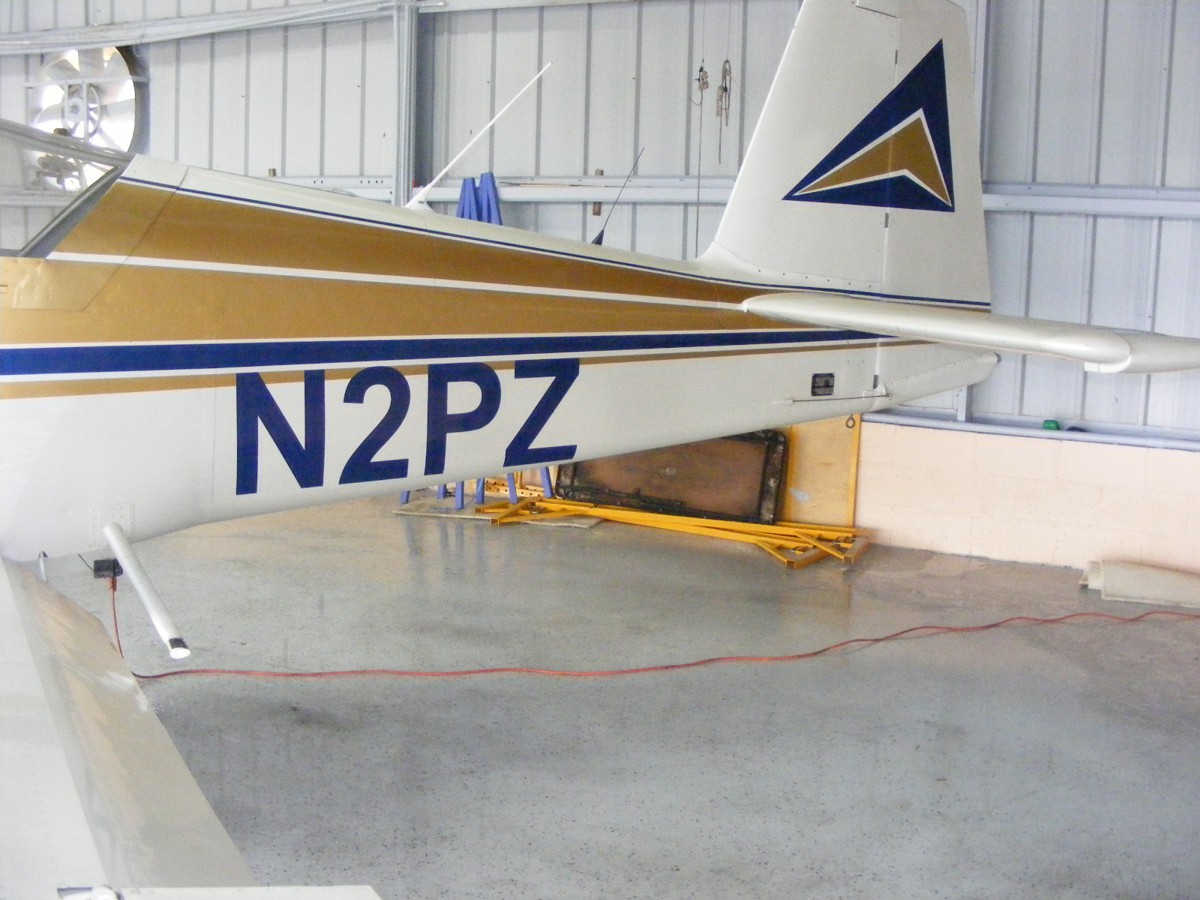 The Hobbs meter now shows 415.5 hours.  The annual inspection is scheduled for this month, but not today.