March 17, 2018:  This Saturday started by picking up Bill Blackwood at his home for the EAA chapter breakfast at Valkaria Airport.  I used my Cadillac for that little jaunt before going up to the Rockledge Airport for a flight on a severe CLEAR day.  The wind was from the south at about 8 MPH for an easy takeoff with two of us aboard.  A touch and go at Merritt Island was first, followed by a low-pass at the Tradewinds grass strip, then a full stop landing at Massey Air Ranch. The traffic pattern at Merritt Island was busy with a couple of airplanes and a helicopter.  Bill brought along his ADS-B receiver and his tablet computer.  He was watching air traffic during the entire flight.  The fly-over the pattern was similar to the flight I made here last week.  The bottom of this map image shows the southbound takeoff from Rockledge Airport then turning toward Merritt Island Airport (KCOI).  The departure from there was north up the river as usual. Bill was using my camera during the approach and flyby at Tradewinds grass strip.  This is the view looking west as I approach the north end of Indian River Lagoon. This photo is after turning west in the "base leg" of the approach to Tradewinds. The Florida East Coast railroad track is built on the first "terra firma" near the lagoon.  Tradewinds has a grass and water approach that is aligned with the main grass runway. Time to put the power to the approach for the flyby. 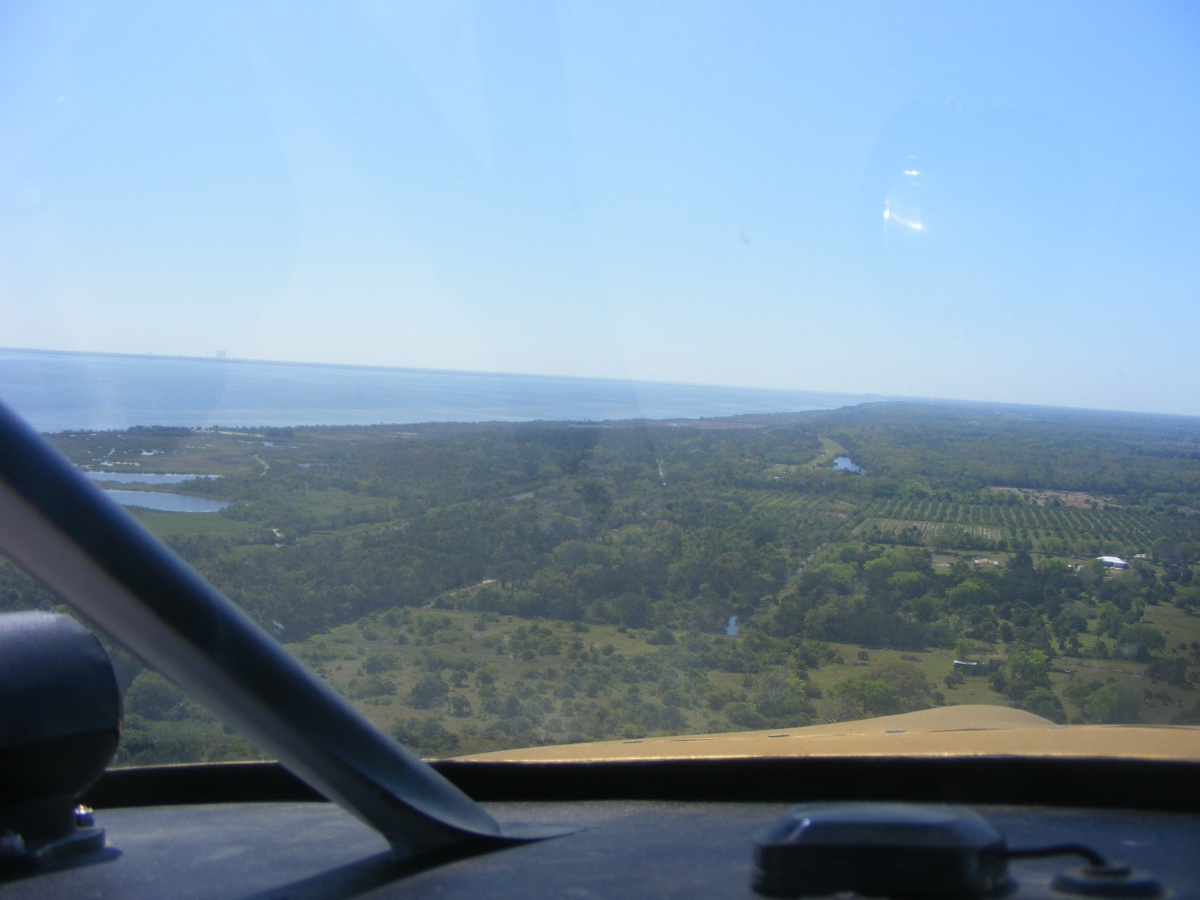 Lined up and at about 500 feet MSL.  The GPS antenna needs to sanded with my 400-grit sanding sponge to minimize the reflection on the inside of the windshield. 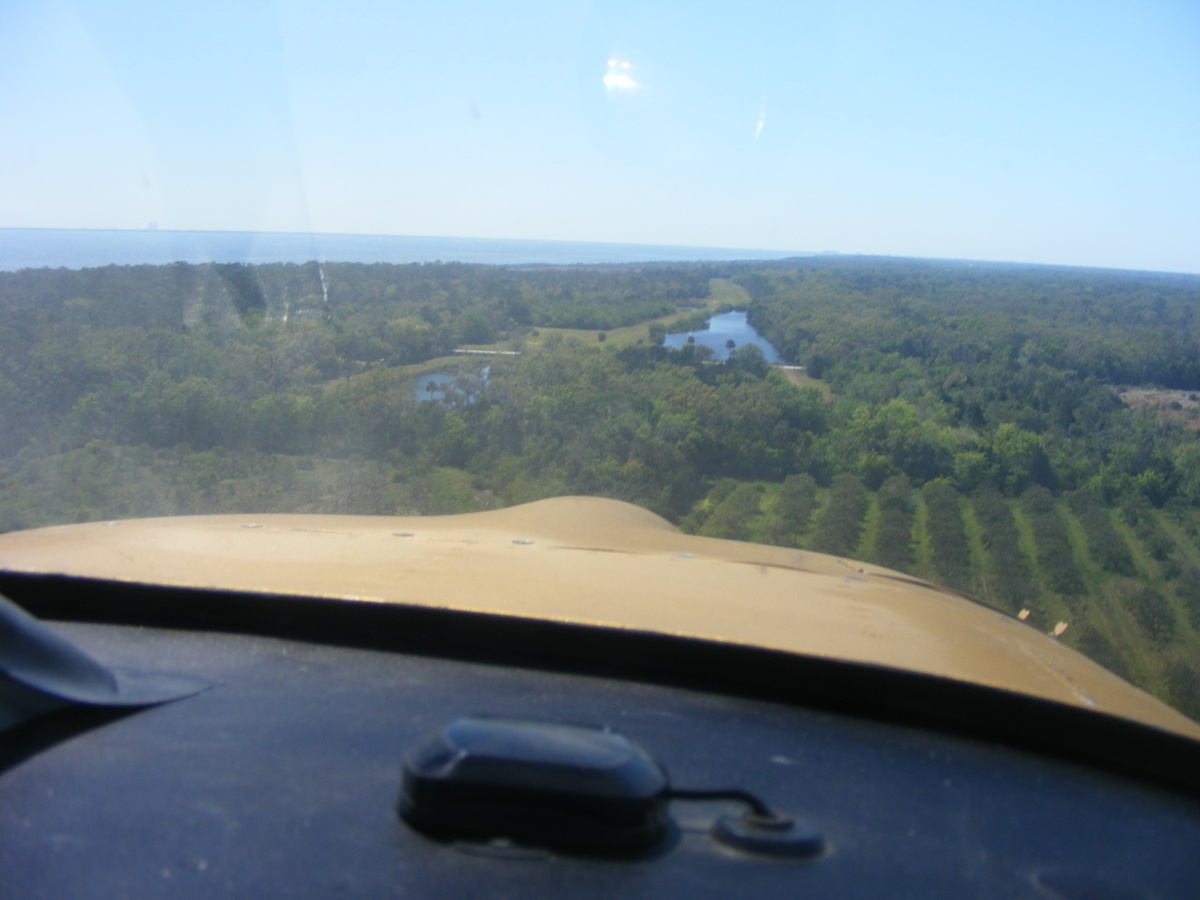 Descending a bit lower for the low pass over the main grass runway.  I pulled up at the south end of the runway to convert airspeed to altitude and to save gas as I turned north and reduces speed for the short ride up to Massey Air Park. 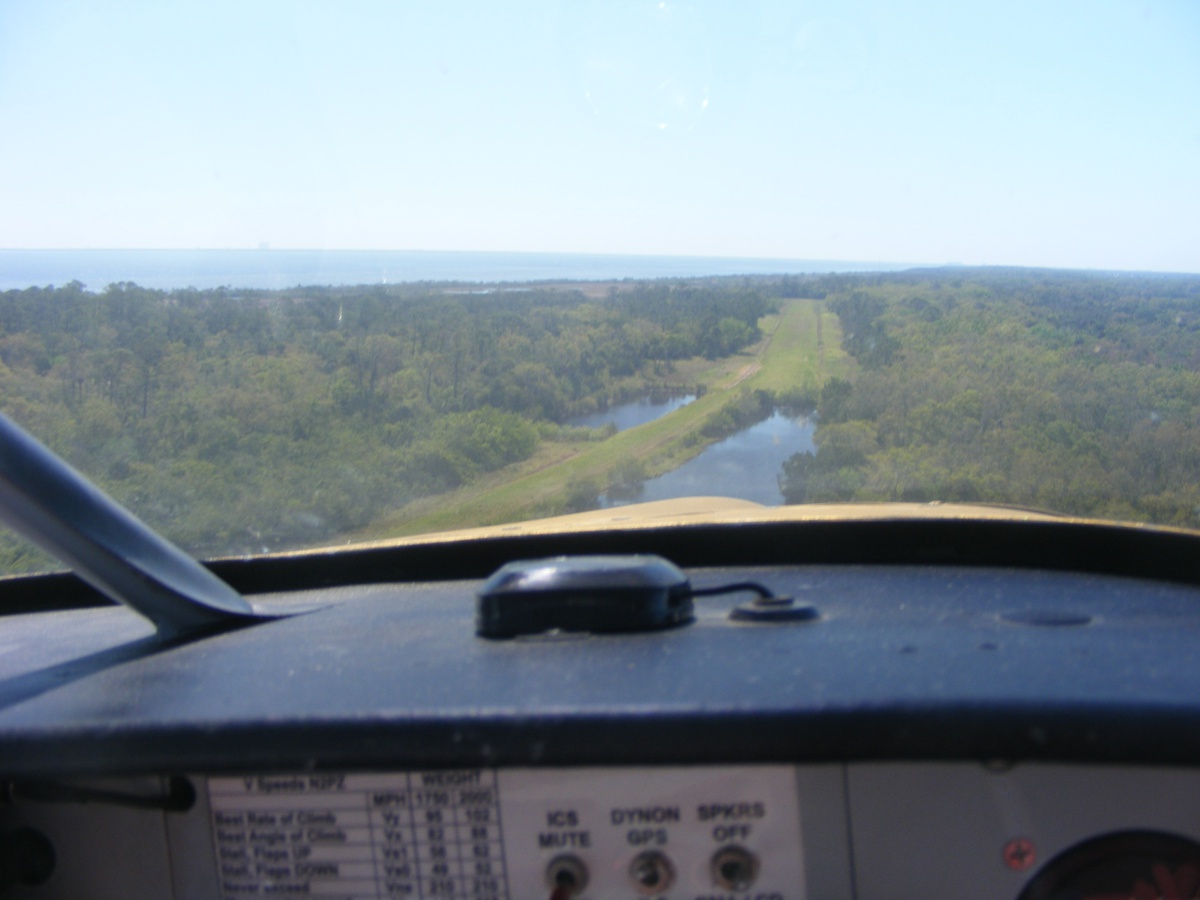 The GPS ground track shows the fly-by at Tradewinds not far from Shiloh.  Those turns going north along Interstate 95 near the Oak Hill exit were in response to air traffic approaching Massey from other directions as we made our way to join the pattern there. Here is a closer view with the GPS track near the Massey Ranch airport area.  That circular turn was made to give a Cessna more room in the pattern as we joined the left downwind leg. We made a full stop landing at Massey and watched a banner towing plane takeoff then return to pick up his banner from the grass on the East side of runway 18.  This twin-engine Beech Barron made a low approach after the banner tow plane was well clear of the runway and the pattern area.  I pulled onto the north end of the runway as the Barron cleared the south end of the runway. I then announced my immediate departure on runway 18.  As I rotated to lift off the runway, a light sport airplane started pulling out at the intersection near the middle of the runaway.  He stopped half way with the front of his airplane on the runway.  I cleared him with more than 50 feet above him. Here is a Google Earth view of my landing, taxi back to the north end of the runway, and departure to the south.  The airplane making the runway incursion was at the ramp where I turned off the runway and began my north bound taxiway movement from the fuel pumps at that same runway intersection.  I watched the errant airplane stop suddenly when he realized he had not heard my departure announcement on the common traffic advisory frequency (CTAF).  I used the Google Earth program to look at my altitude profile and found I was at 82 feet MSL per the GPS data as I passed the intersection.  That puts me more than the 50 feet clearance I estimated when I flew past that intersection and the airplane stopped there half way onto the runway. 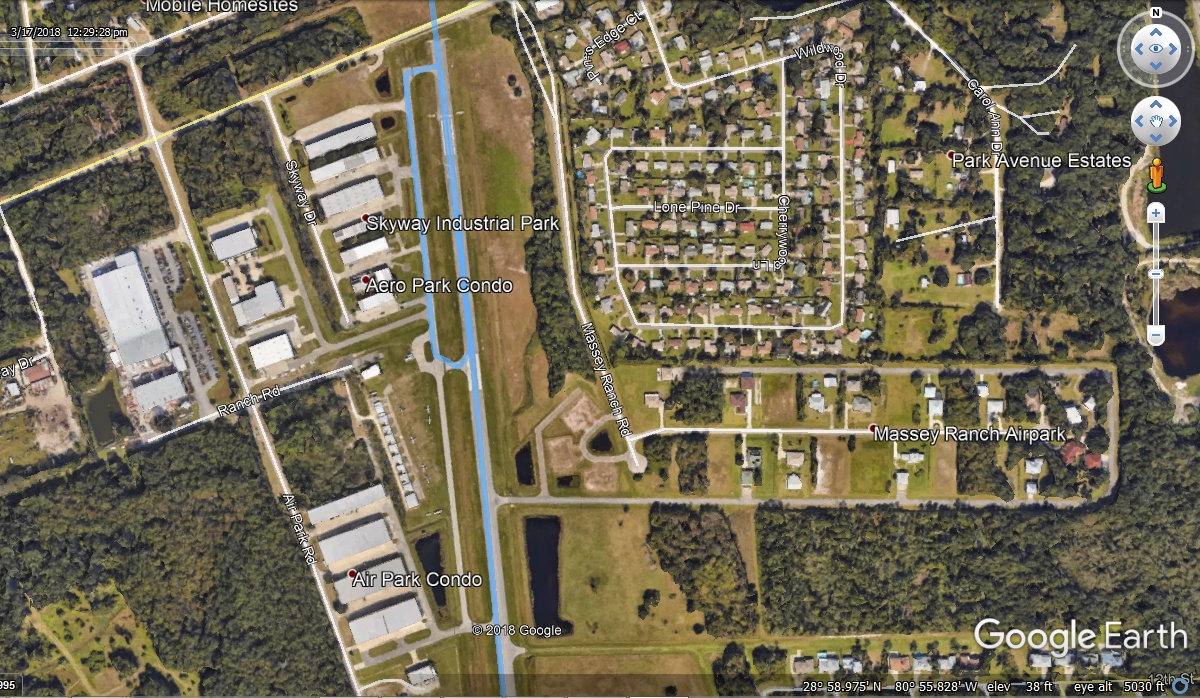 The rest of the departure from Massey was normal as we got on course for home.  Bill resumed his monitoring of nearby air traffic via ADS-B.  We were above 2,200 feet MSL as he reported traffic below us at around 1,000 feet MSL while we were over US 1 heading south. At the end of the flight today, I quickly removed the cowl and the aviation spark plugs to do the compression tests with all cylinders normal at 80/78 PSI.  I demonstrated how a gentle movement near top-dead-center would seal the valves for the testing.  Next weekend will have more of the annual inspection. The total time added to the Hobbs meter today was 1.4 hours.  That brings the total time for my airplane to 416.9 hours.  Before leaving the hangar, Bill got a look at the engine and all the electrical and fuel connections to the various pressure sensors.