February 24, 2018:  A Saturday with good flying weather with scattered clouds around 2,500 MSL over the mainland, but clear again over the Indian River Lagoon and the barrier islands.  The flight today was to look at new interchange being built to connect I-95 and US 1 in southern Brevard County.  The prevailing wind today was from the south due to a high-pressure area out in the Atlantic Ocean. 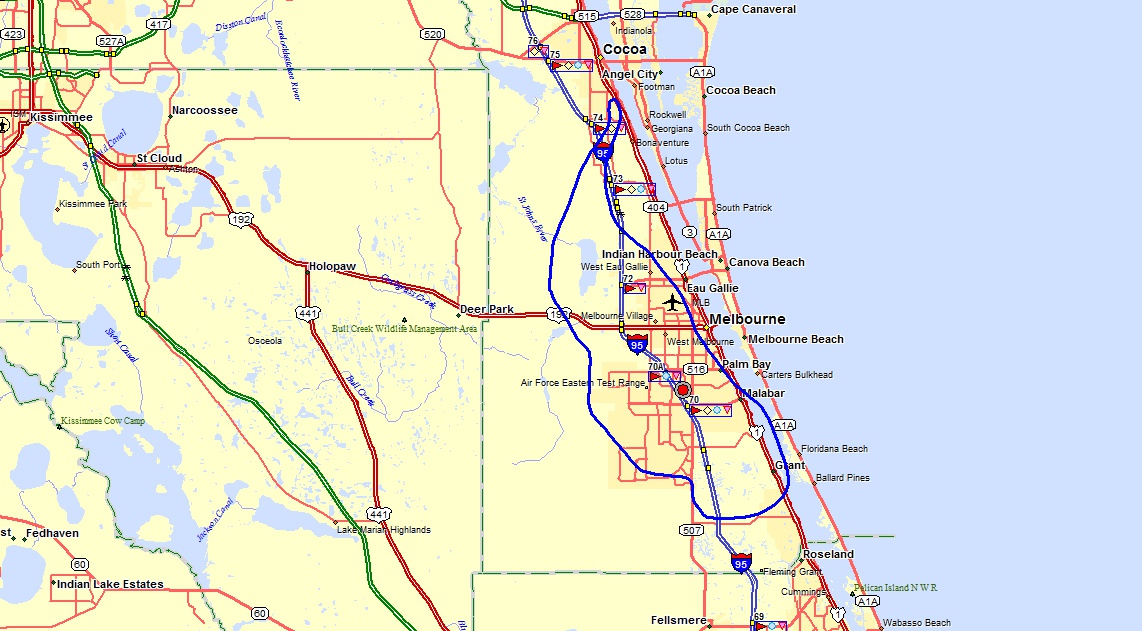 Flying under the cloud deck in bumpy air does not bode well for taking aerial snapshots, so today we rely on my GPS overlay and Google Earth images of my flight path.  This image is from last year and does not show the pilings that have been recently installed at the exit location.  The ground inside the yellow circle was prepared almost a year ago.  The actual construction of the bridge supports was started late in 2017.

There are two airports with Class D airspace and control towers that I fly around or over when I go south from Rockledge Airport.  My GPS track on the left is greater than 5 miles west of the Melbourne Airport.  I stay under 1,500 feet MSL when I fly out here, under the approach for airline traffic coming into KMLB from the west.  I listen to the Melbourne tower to know what traffic is doing as a pass by out west or over the top above their airspace.  Runways 9L and 9R were in use today.  My return flight path heading north is on the right. 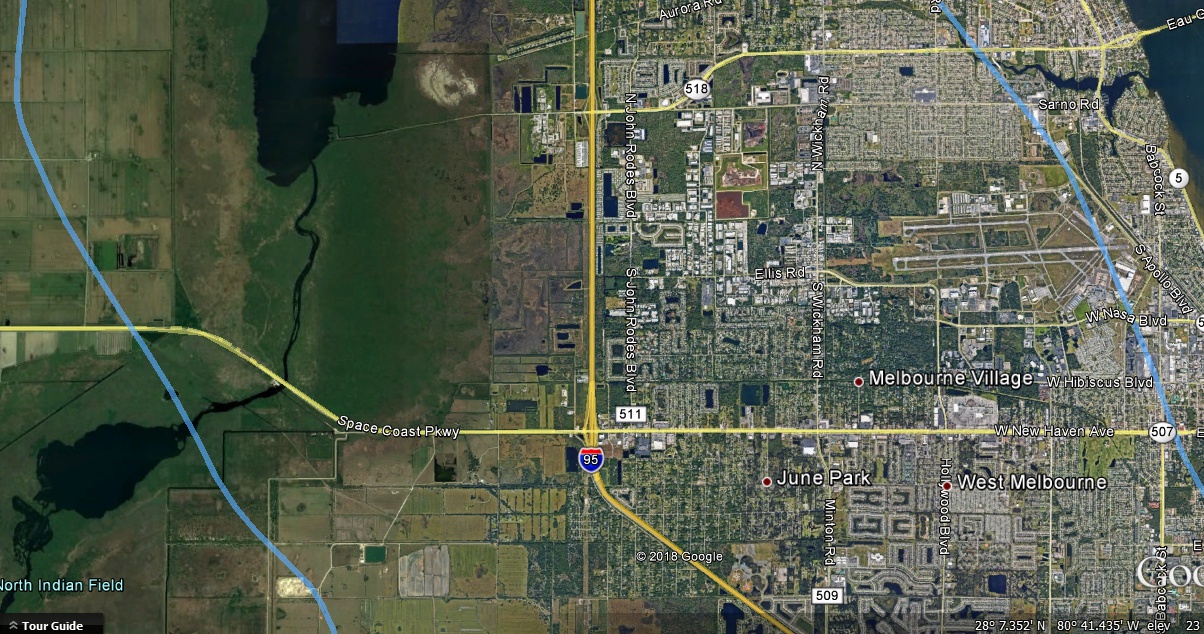 Here is a view of my departure from and return to the Rockledge Airport.  Remaining clear of the Patrick Air Force Base Class D airspace is the issue here. 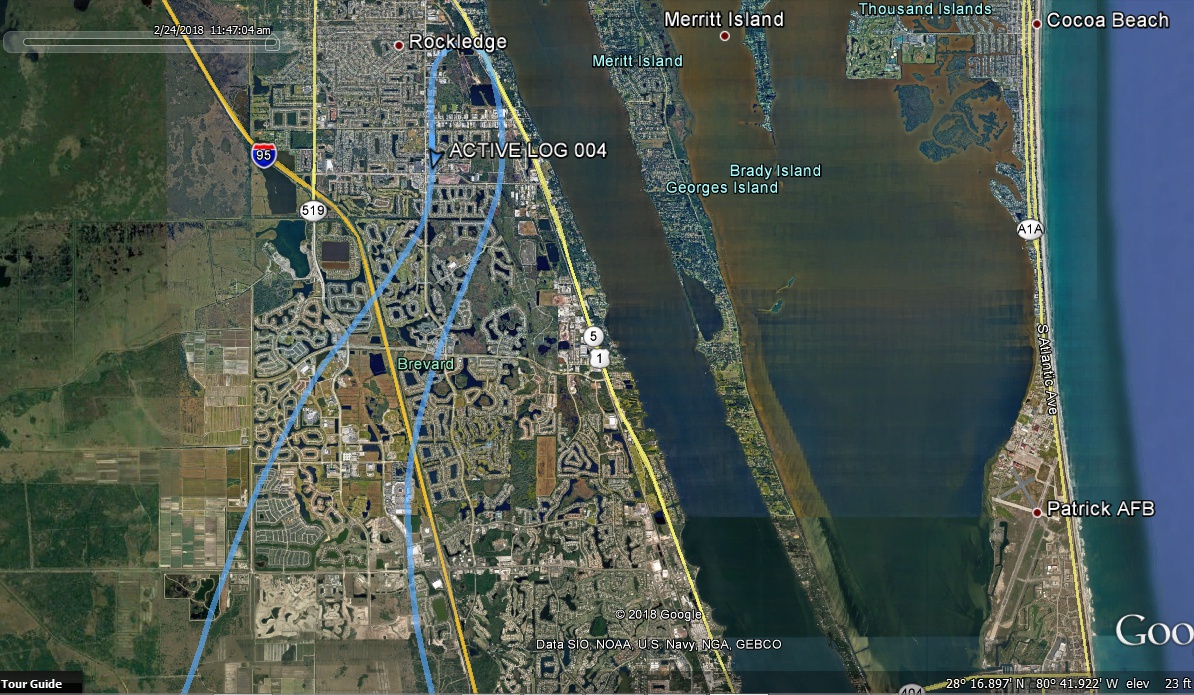 The takeoff and landing at Rockledge were to the south using runway 18.  The wind was from the EAST when I returned after a 42-minute flight to the south end of the county.  The crosswind landing from the north always needs a bit more air speed on the approach and positive rudder control all the way down the runway to the ramp exit.  That is the reason you do not see many photos when I am on approach to land.  I had to move this Aventura II out of the hangar to get my airplane out before the flight. 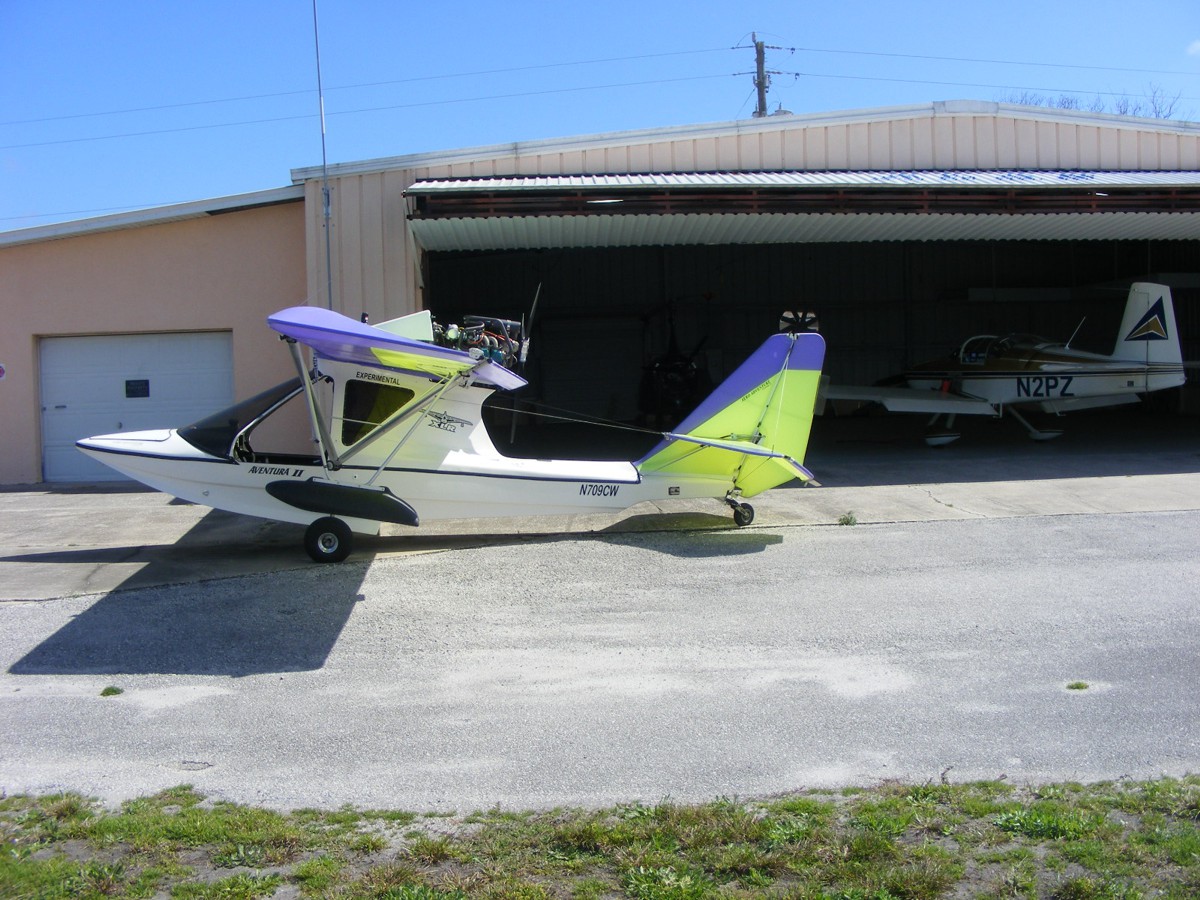 With the extra space in the hangar, I can taxi into the hangar with the engine at idle.  The nose-wheel Van's RV's can be turned very tight.  In this case, I do not have to push the airplane up the slight incline from the ramp to the hangar doorway. 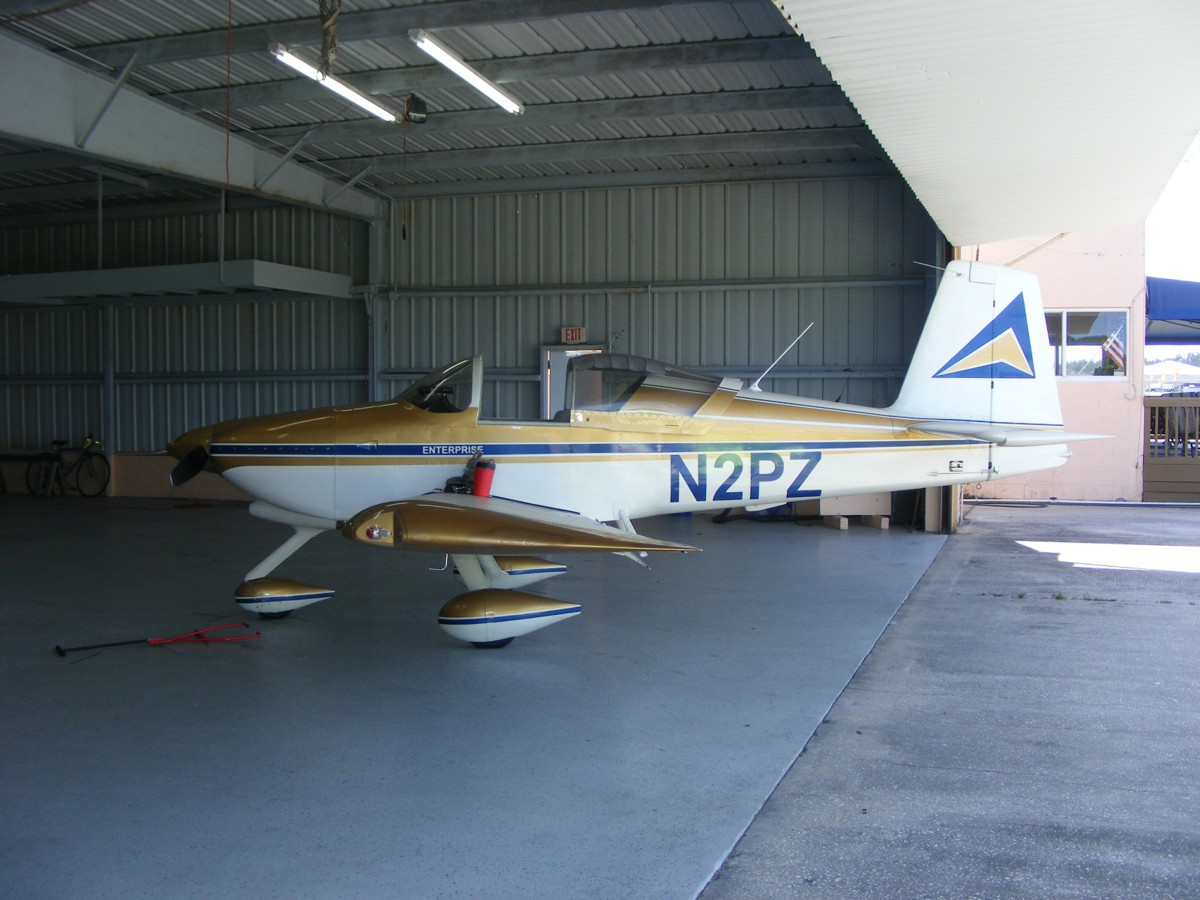 The gyrocopter was down for service and was out of the way from my space in the southeast corner of the hangar. 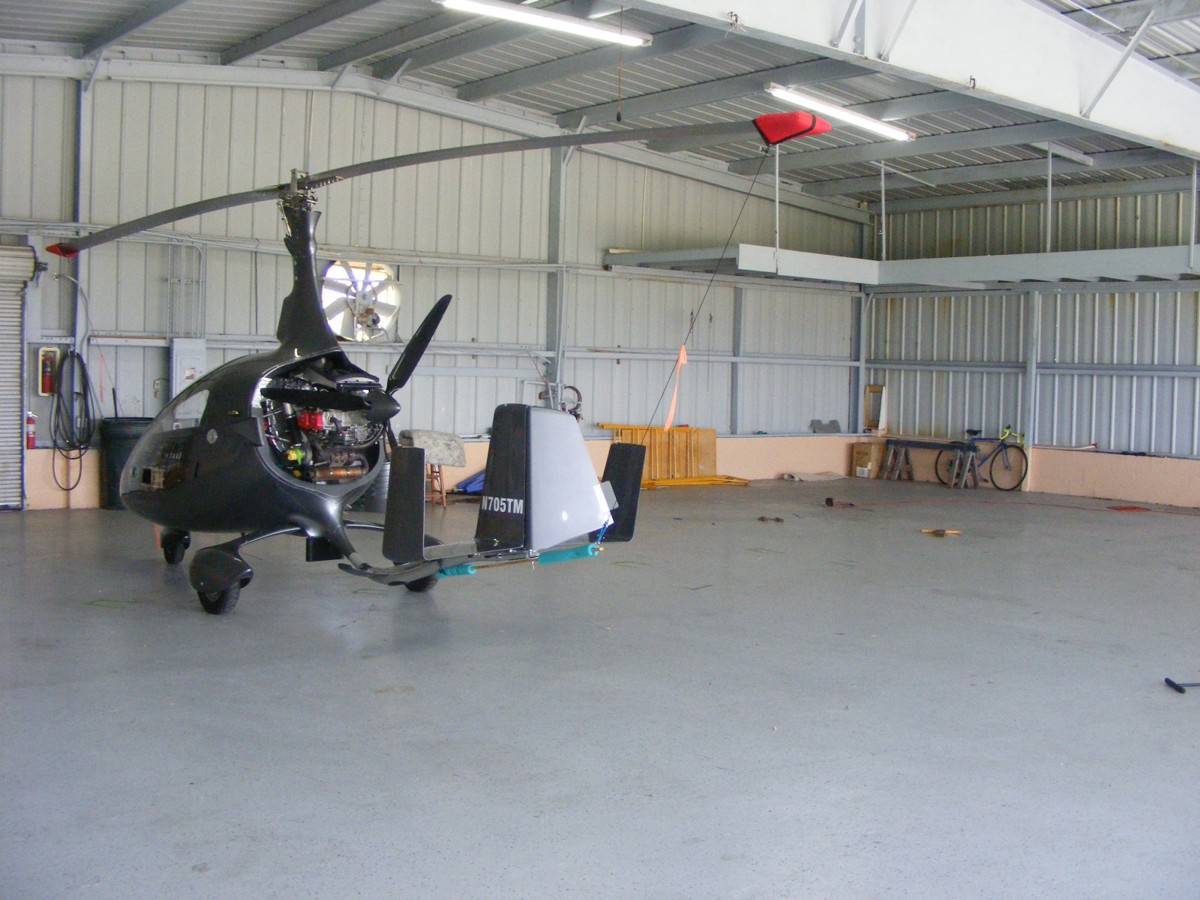 All that is left to do now is put the Aventura back inside the hangar near the front door.  Billy flies it when he gets a chance.  He was not here today.  I did get a short text message this evening saying he was in bed getting over the flu. 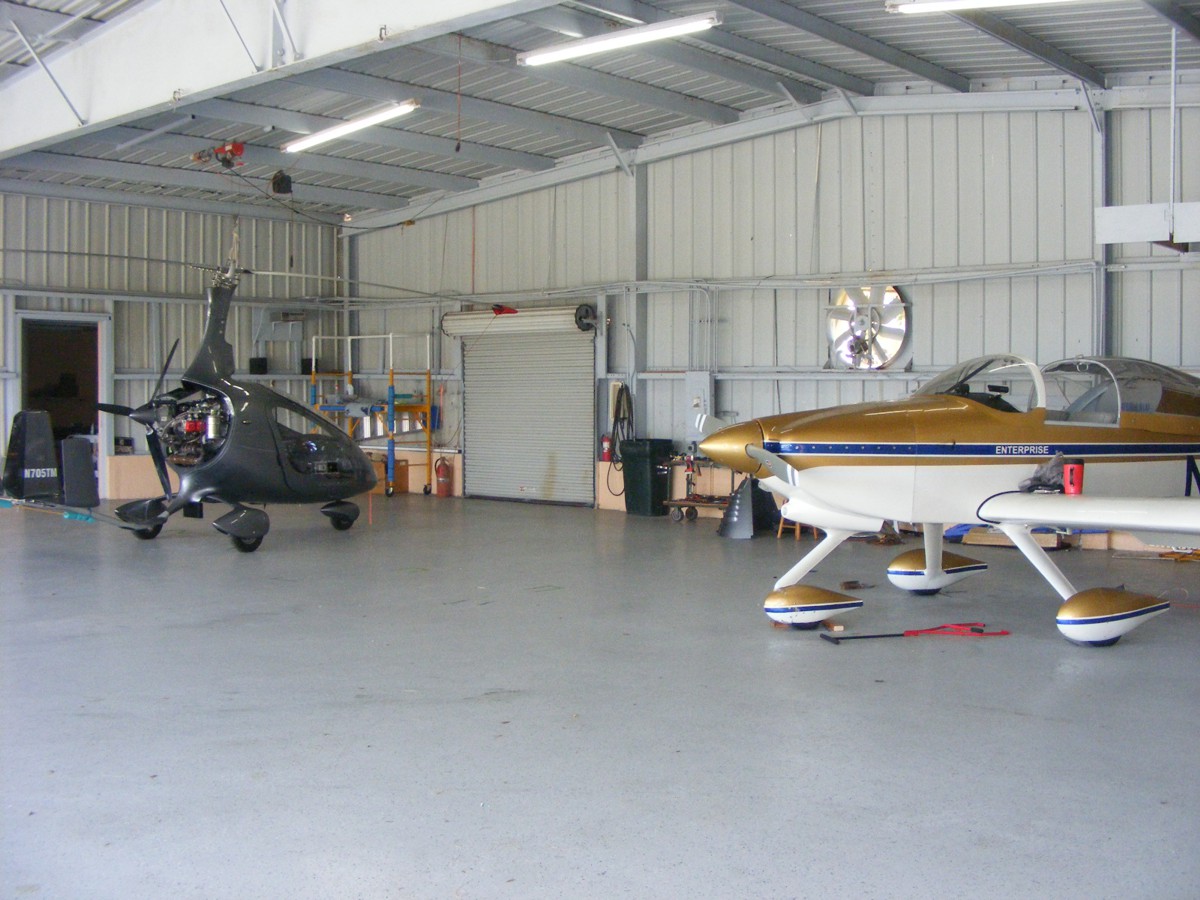 With warm weather here again in Central Florida, the flying insects are back, requiring some clean up of the airplane before locking up to leave.  The flight time today was 0.7 hours added to the Hobbs meter which is now at 414.4 hours total time.