December 2, 2017:  Today is another beautiful day in this part of Central Florida by the Atlantic Ocean.  The takeoff on runway 36 was typical with the pattern to the right over the Indian River for my departure toward the southwest as I climbed above the Class D Melbourne airspace. 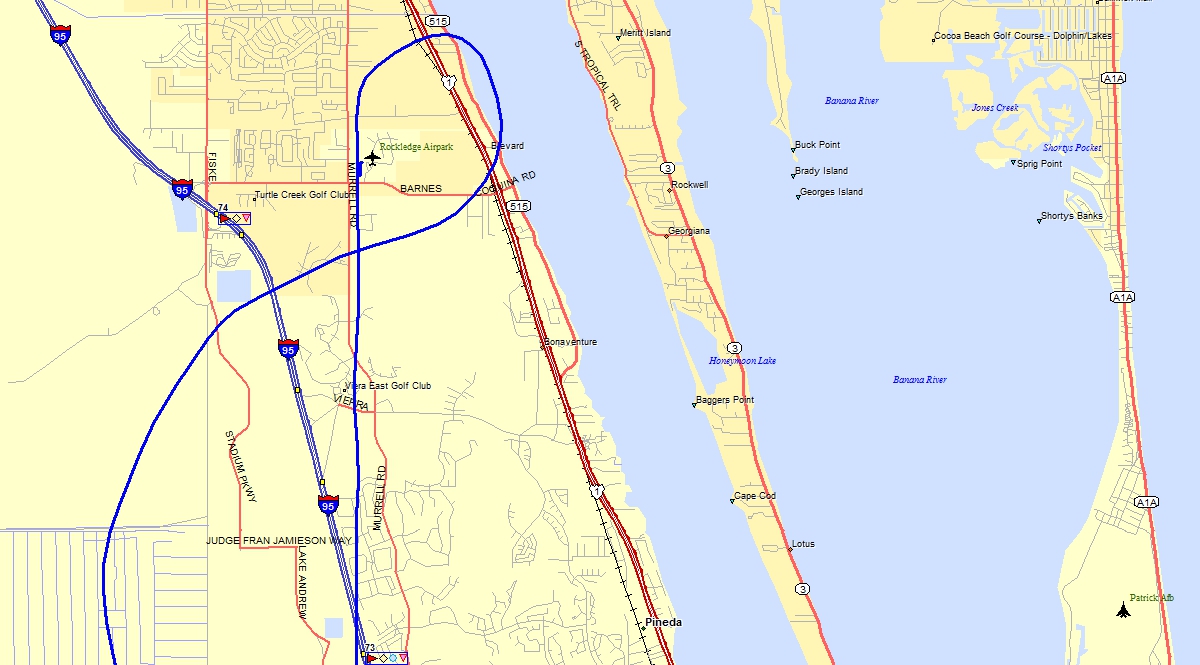 I was listening to the Melbourne control tower frequency when the controller talked to a departing Delta Airlines flight and described an unknown aircraft at 3,000 feet approaching the MLB VOR.  I called the controller immediately to confirm my altitude and that I have the airliner in sight out over the ocean.  I was no factor for the airliner and gave my intentions to go south at 3,000 feet MSL.  I was busy flying around the broken clouds to remain VFR and I did not take any photos in this part of my flight.  Here is my GPS ground track passing over the Melbourne Airport in both directions today.  The southbound track is the one with the 270-degree left turn near the old town of Palm Bay on US 1.  I was making a westbound pass north of my house marked with the RED DOT with gray circle on the map.  From my perspective at 3,000 feet, the house was completely hidden by the big oak trees in the back yard.  The old golf course was clearly visible. 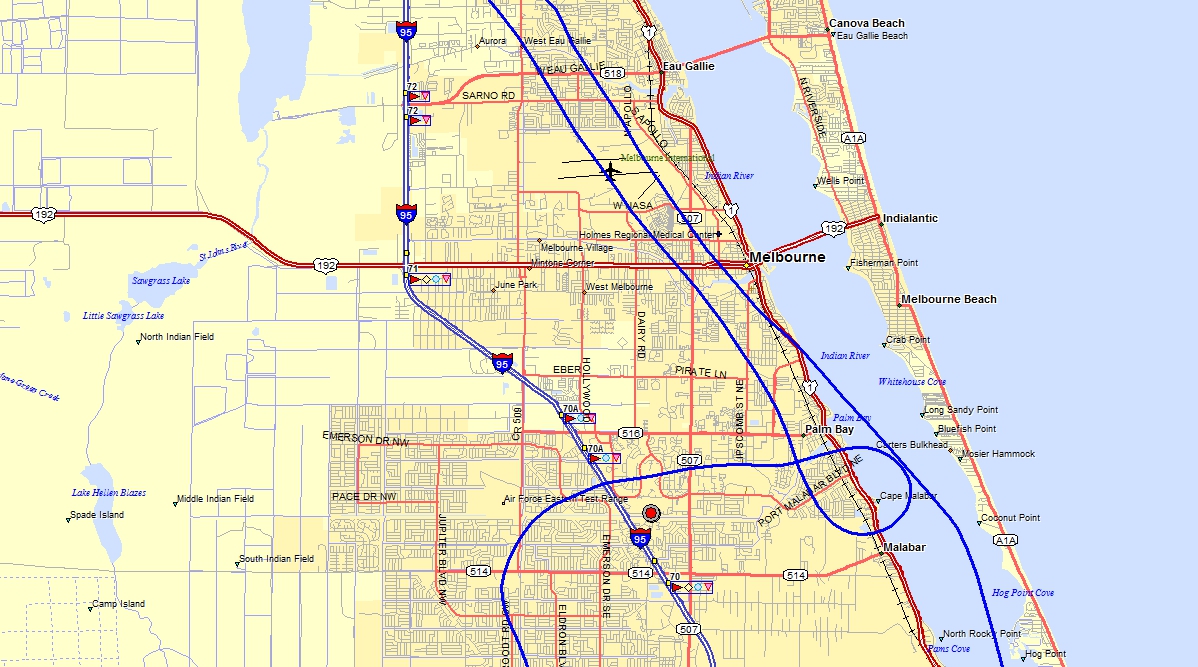 Flying today was just for fun and some sight-seeing to an airport that has not been on my radar (pardon the pun), New Hibiscus (X52).  Just west of Interstate 95 and south of Florida Route 60 west of the city of Vero Beach is a 3,120 feet long grass strip that is the home for some GLIDER pilots and their quiet airplanes.  I decided I would go there today without realizing until I approached that the airport had active gliders in the air.  I spotted one glider and the tow plane preparing for takeoff.  I called on the CTAF frequency to learn one glider was flying above my 2,000 feet MSL position.  I decided the best thing I could do was exit to the west along route 60 before heading back to the north. 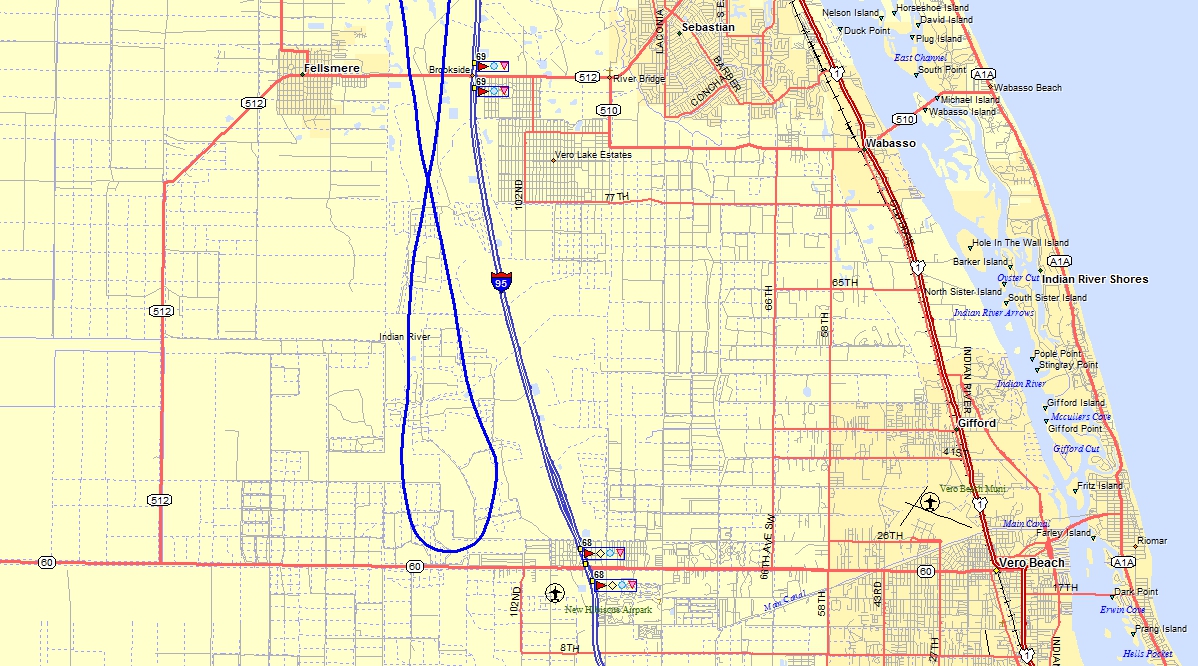 On the return trip, I flew past the Sebastian Airport and thought about doing a touch-and-go there, but that place has a lot of skydivers to watch for if you get too close. 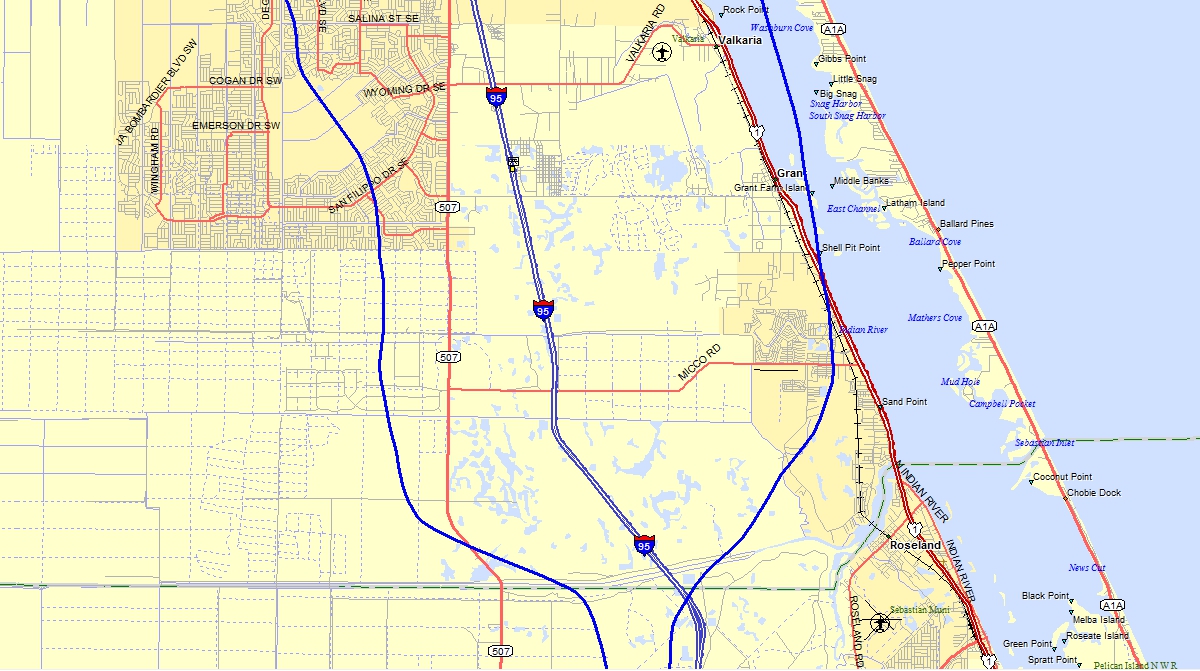 The southbound track seen in the map above is west of I-95 and I am turning to stay clear of the clouds at 3,000 feet MSL in VFR conditions.  I took the photo below when I was crossing I-95 heading north near the Sebastian River north of the Sebastian Airport.  I took this shot below when I was over Micco Road looking north.  I just noticed on the map segment above an air strip just south of Micco Road.  I zoomed in using the Street Atlas map program and it was named "Parris Brothers Private" on the map.  Some online research shows it was an active private airport, but is not used anymore.  There are three aviation fuel tanks behind a building, but they are fenced into an area with no access to the grass runway that appeared to be mowed as seen in a Google Earth image from March 20, 2017.  All those houses down there are part of the Barefoot Bay Community accessed from US 1, which wiggles along on the mainland adjacent to the Indian River. 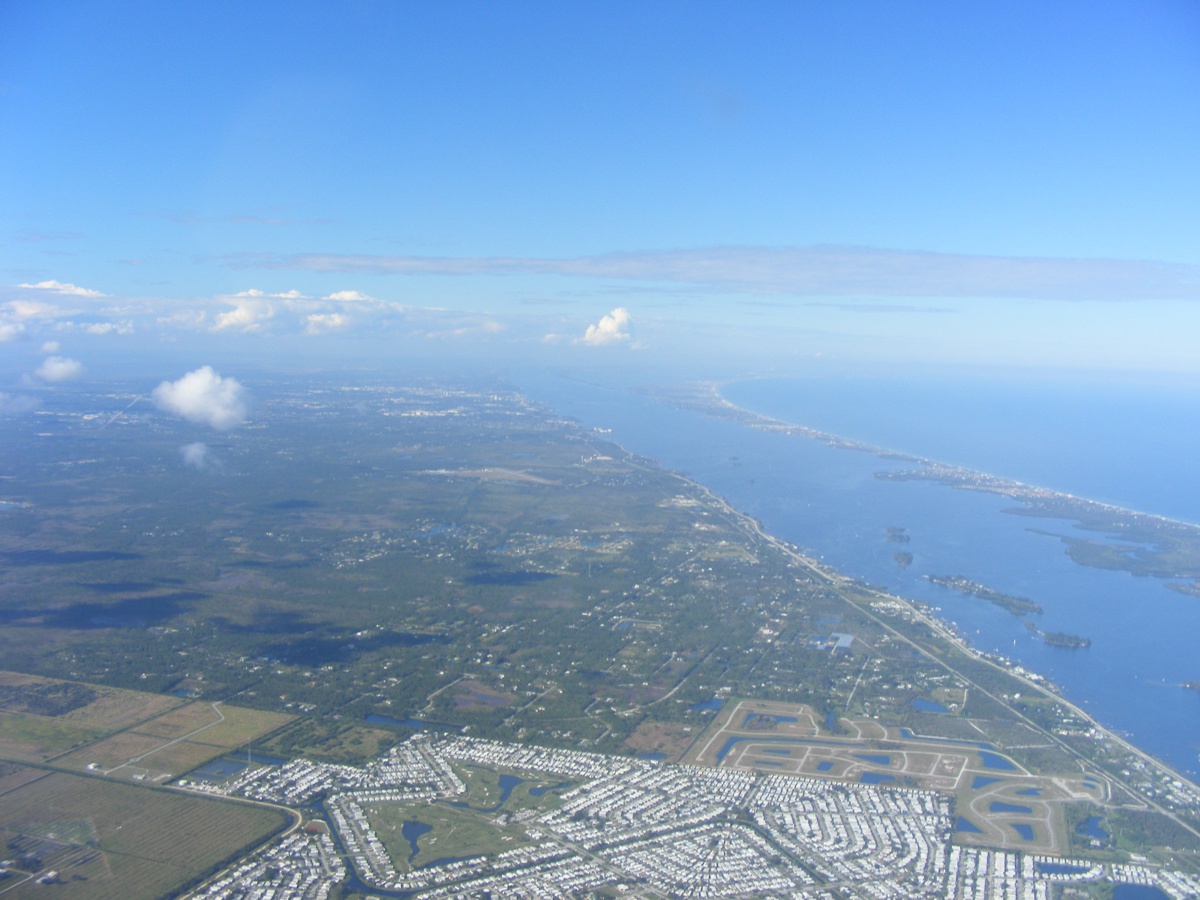 My attention is on the cloud layer above my flight altitude and how much it has changed since my takeoff at 1:55 PM from Rockledge Airport.  I am also listening to the air traffic at the Valkaria Airport seen as a triangle of space ahead less than a mile west of US 1.  A couple of airplanes are in the pattern and I decide not to join them and continue north. 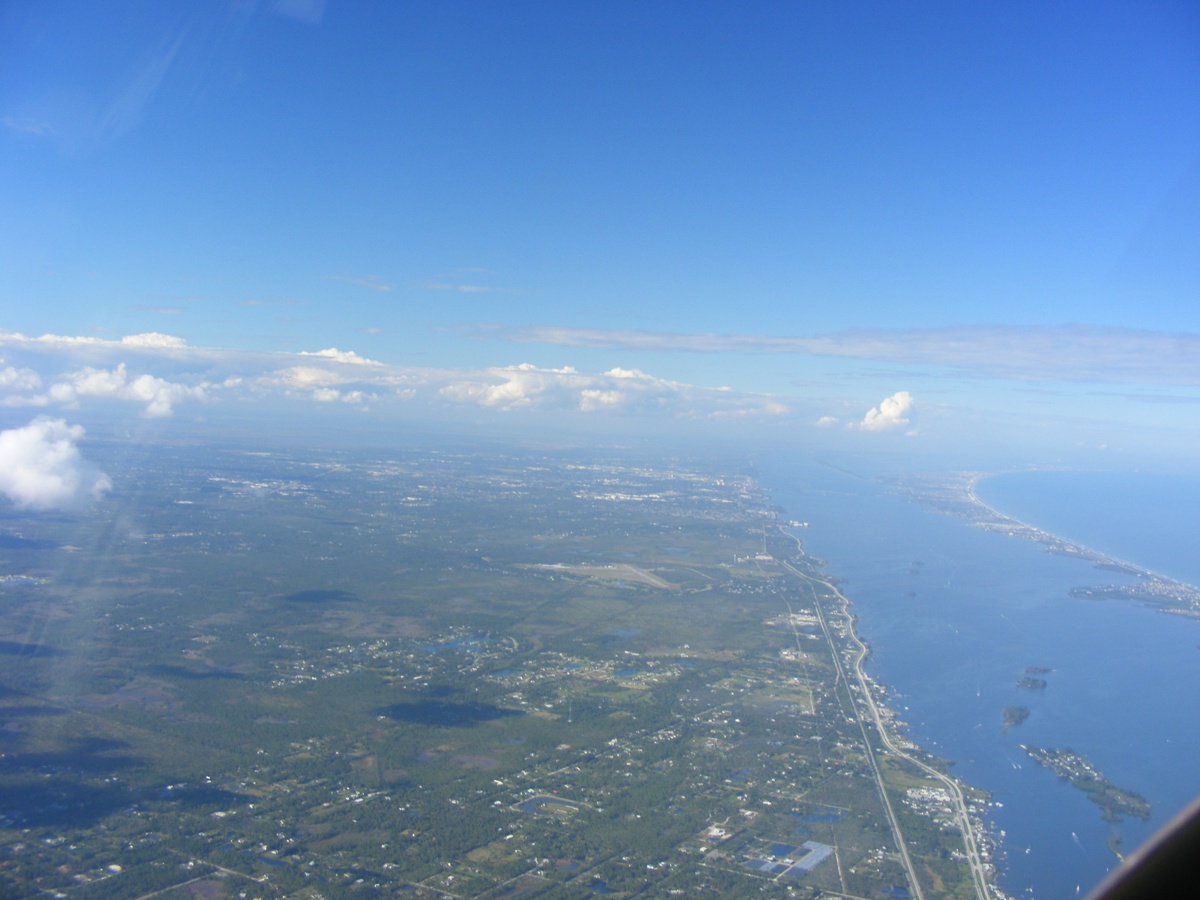 I was getting lined up with the runway at Rockledge with about 1.5 miles to go when I snapped this photo.  I cropped out what is seen here and added the labels when preparing to publish this web page.  That paved runway at Rockledge is 2000 feet long and does not look like much from here inside the yellow circle.  Murrell Road is that long north/south road between Viera Boulevard up to the city of Rockledge.  The airport is accessed from Barnes Road running East/West from US 1 to I-95.  Billy used Murrell Road for a forced landing when he lost power after a takeoff to the south one day a few years back.  He made a perfect landing at 45 MPH until the lady in the car in front of him looked into her rear view mirror.  She panicked and slammed on her brakes.  That long four-lane road is a divided surface street named Murrell Road.  There is a bank on the south side of Barnes Road that is lined up with the runway.  The runway is set back north of the street to insure clearance of traffic traveling on Barnes Road. 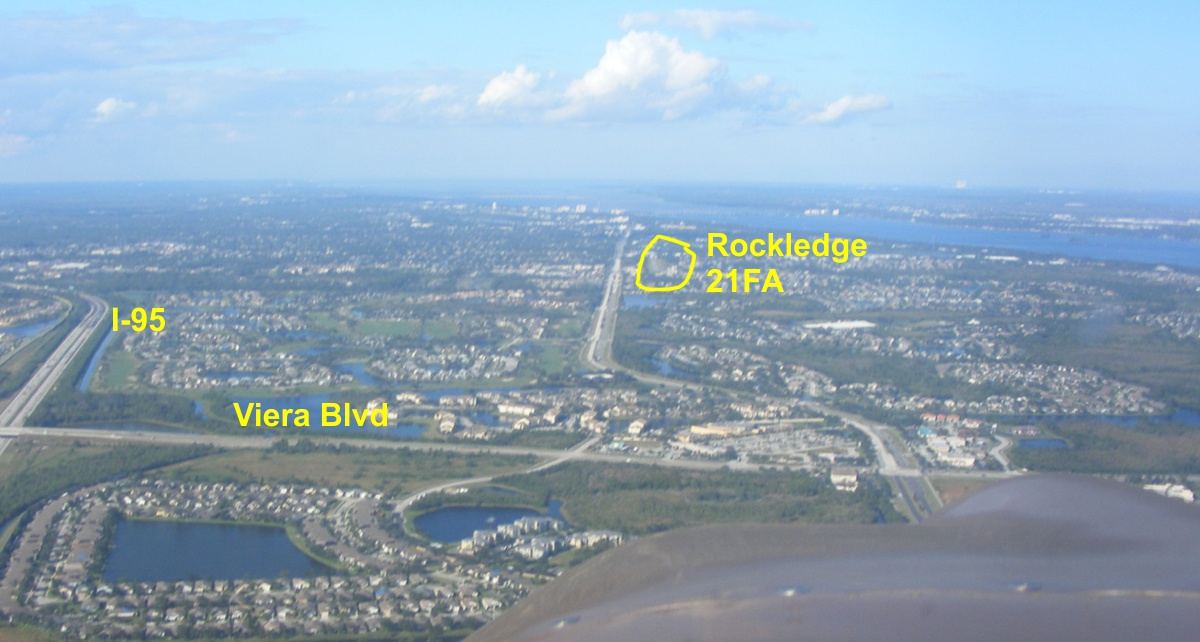 The end of the flight was staying heading north to get lined up with the runway at Rockledge.  You can see the departure to the north with the turn away from the restricted and controlled airspace in these parts.

Back on the ground again with the gyrocopter in the shot outside before putting my RV-9A back inside the hangar. 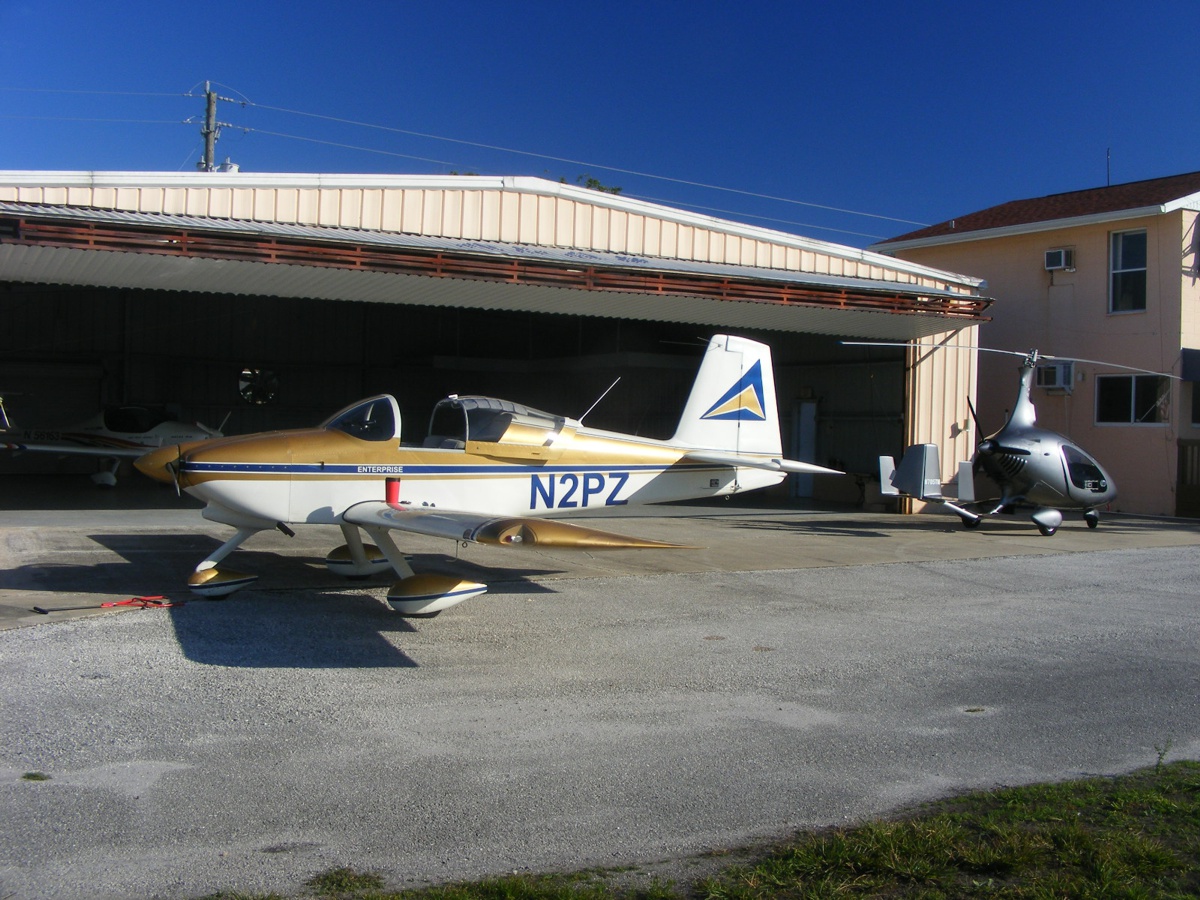 I had to put more adhesive behind the side panels on both sides of the cabin ahead of the wing spars.  I need to find out what caused the brown spots on the fabric. 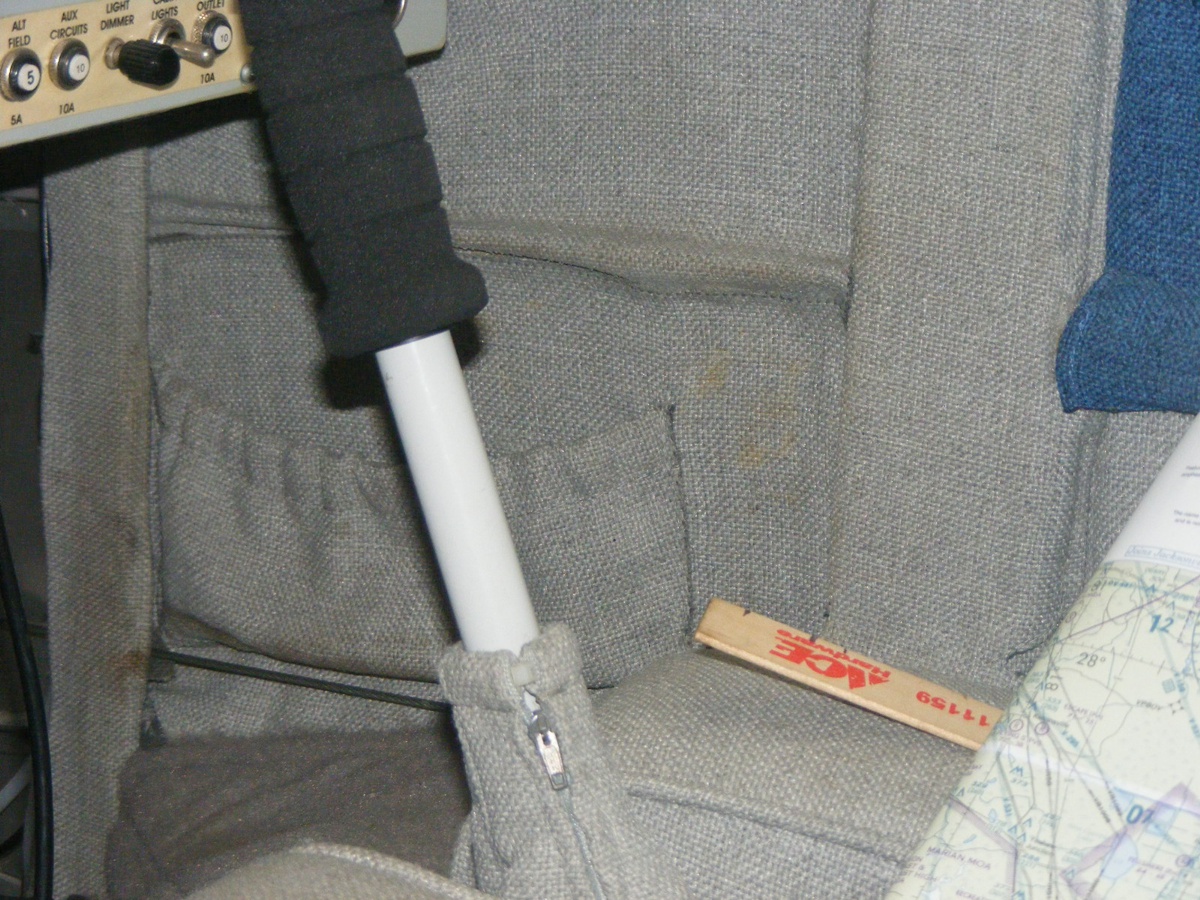 The airplane is 12-years old and there are some minor issues.  The spray nozzle on the can of contact adhesive had become blocked.  I found I could cut the head off of a straight pin, then cut off the pointed end at an angle to make a small drill bit that fit the hole in the side of the spray nozzle.  I chucked the "bit" into my drill and it worked to clear the nozzle to the vertical shaft inside the nozzle.  I used the head of the straight pin to be sure the input vertical shaft of the nozzle was clear up to the top of it.  I used a push pin to confirm the supply valve in the top of the can was working.  I made sure to turn the can upside down to clean the valve with just air coming out.   The smallest commercial drill bit I have ever owned was a #60.  This modified straight pin bit is much smaller and is less likely to bend since it does not have the auger cut of a normal drill bit.  I turned my wire cutters to a 45-degree angle to the shaft of the pin to make the cut.  That made one side of the chisel edge closer than the other edge of that cut. 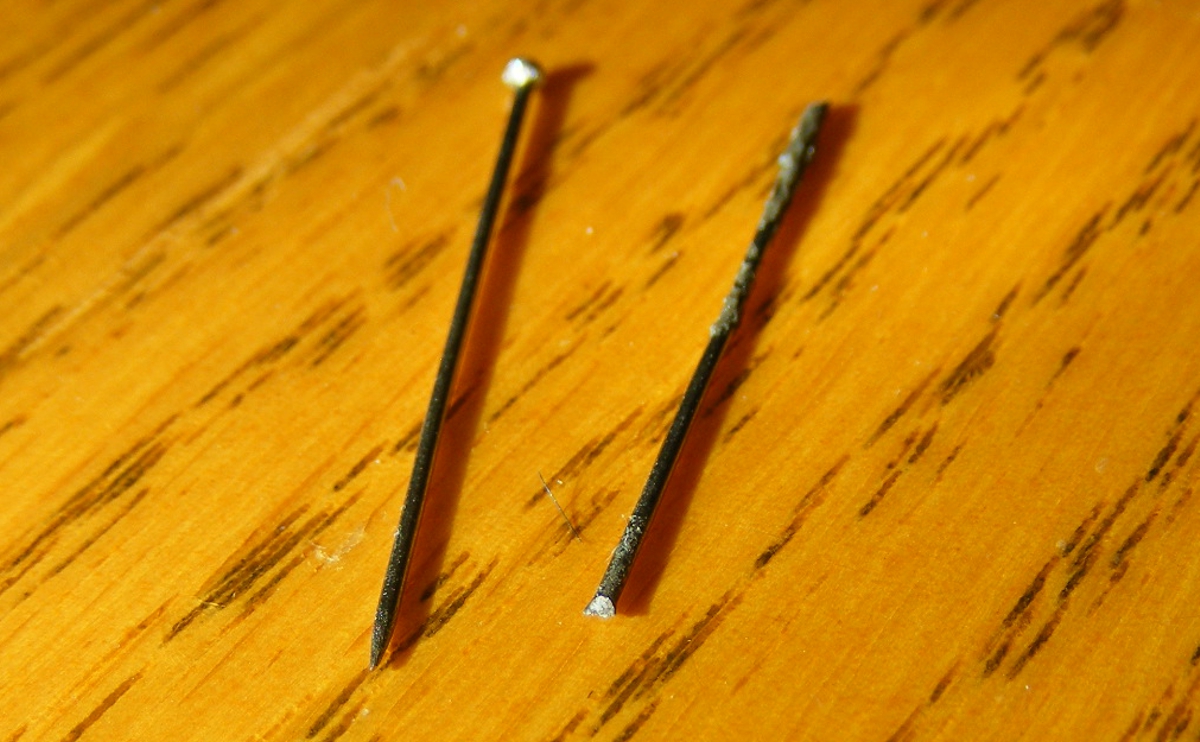 The other side has the same problems. 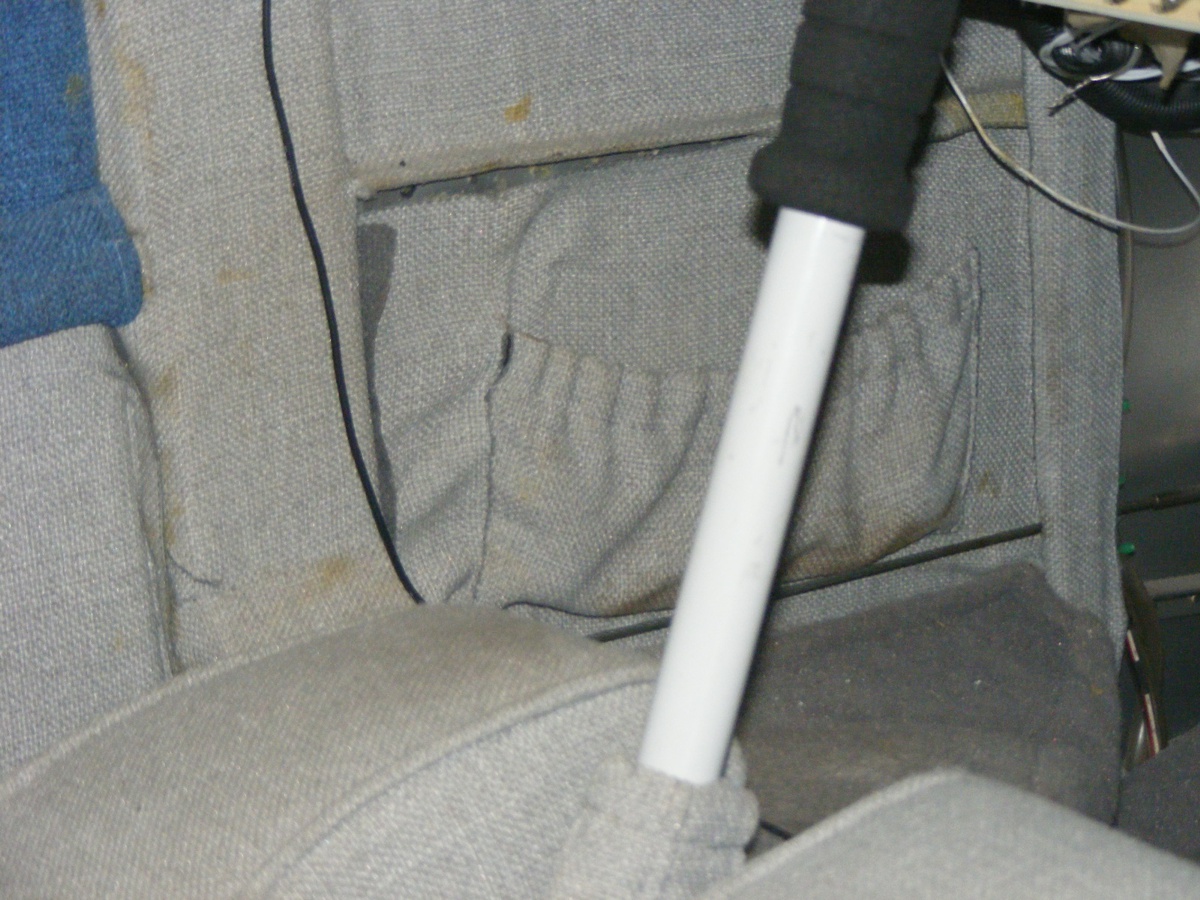 Always remember after using a spray can of paint or adhesive, turn the can upside down and spray until no paint or adhesive comes out of the nozzle.  It only takes a one-second spray to clear the nozzle.  It will work the next time you reach for the can.  Remember to shake the can VERY WELL before trying to use it.  I checked the 2004 date on this can and realized it is the original can of adhesive I bought when I was installing the interior in 2005.  The adhesive was made by Loctite Corporation of Mexico. 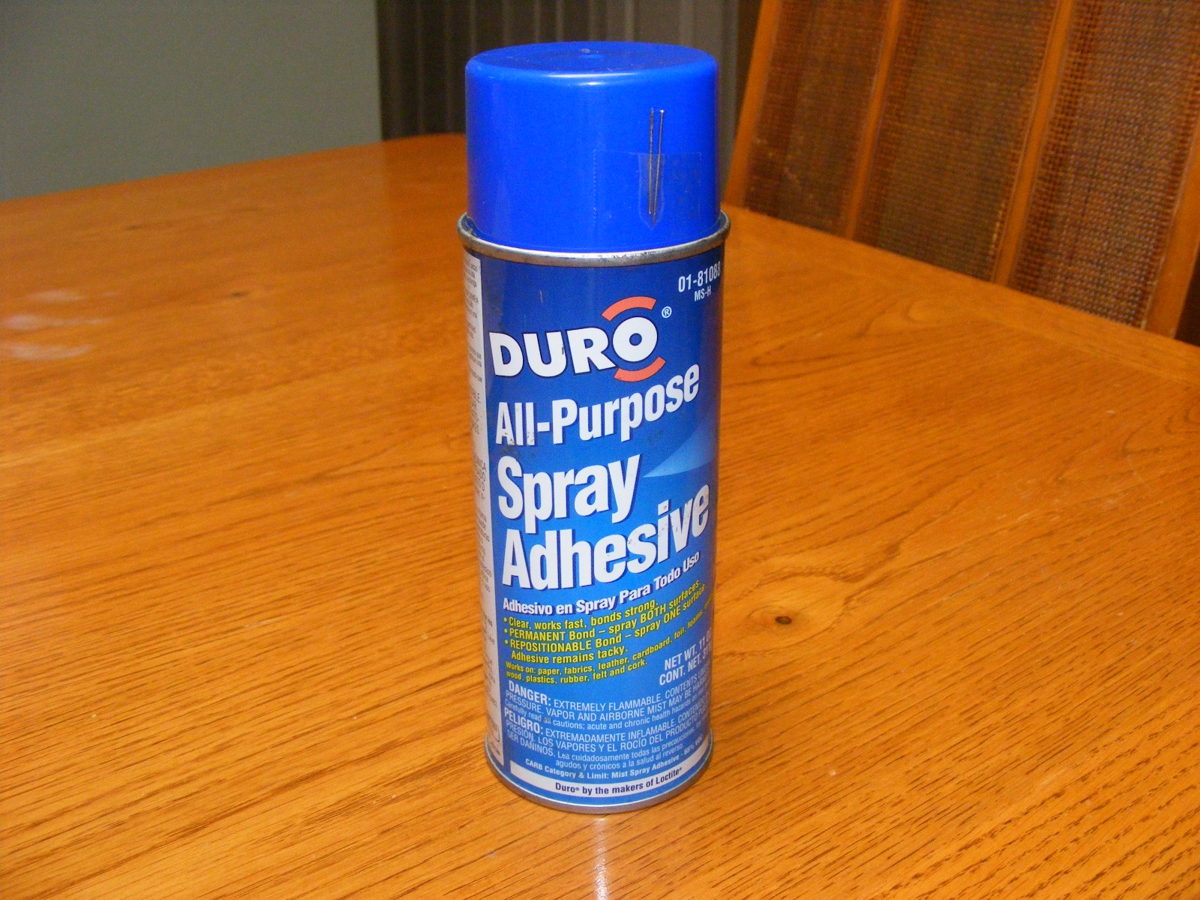 The Hobbs meter added 1.0 hours today for a total time of 409.6 hours since new.