December 23, 2017:  "T'was the Saturday before Christmas", enough of that poem stuff.  I had good weather here in the Melbourne Area, as in VFR with some clouds to avoid above the thermal layer at 3,000 feet.  Typical for Florida.  The flight was mostly south over the Melbourne Airport with a full stop landing at Valkaria, then a return up over Rockledge, a touch and go at the Merritt Island Airport before returning to the Rockledge Airport. 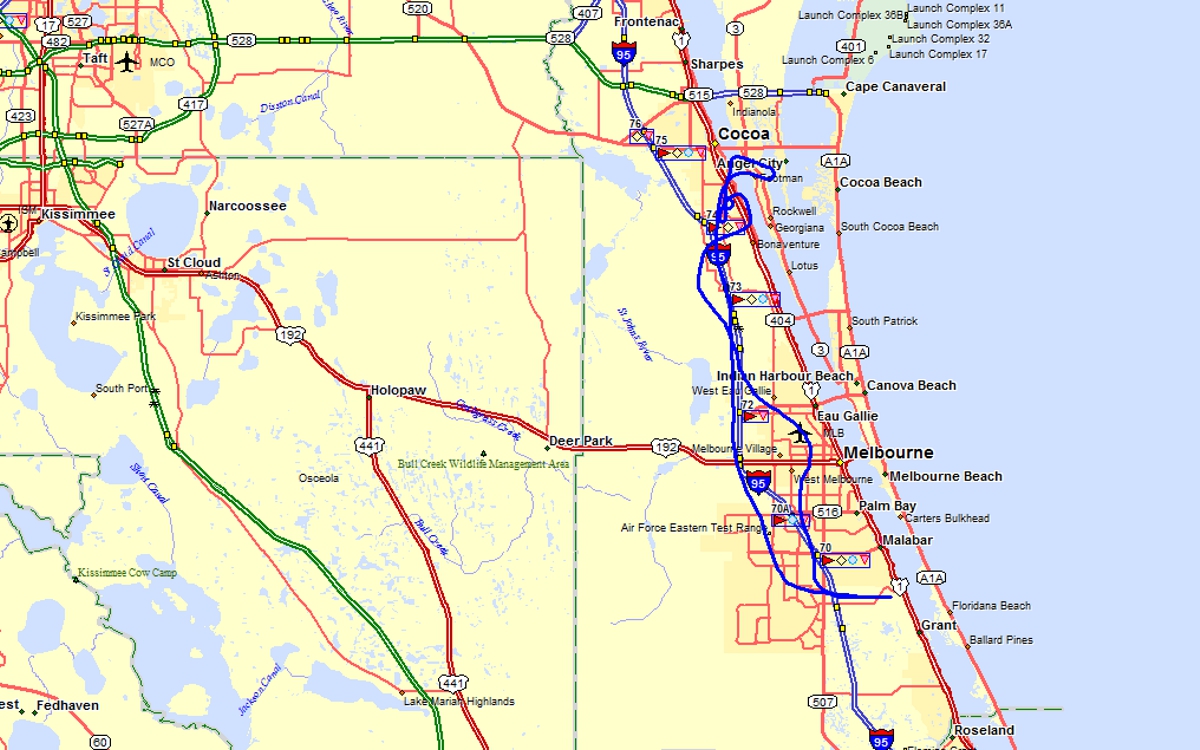 I noticed this UFO cloud west of KMLB as I was climbing up to fly over the MLB VOR.  As I neared the airport above the Class D airspace, I was listening to the tower talking to a departing Delta Airlines flight that had taken off to the East.  He was giving the airliner an advisory about me while the airliner was just off the beach in a climbing left turn a good 5 miles from my location over the VOR.  I checked in with the tower to confirm I was the VFR target on radar and that I have the Delta aircraft in sight as I was heading south toward Valkaria. 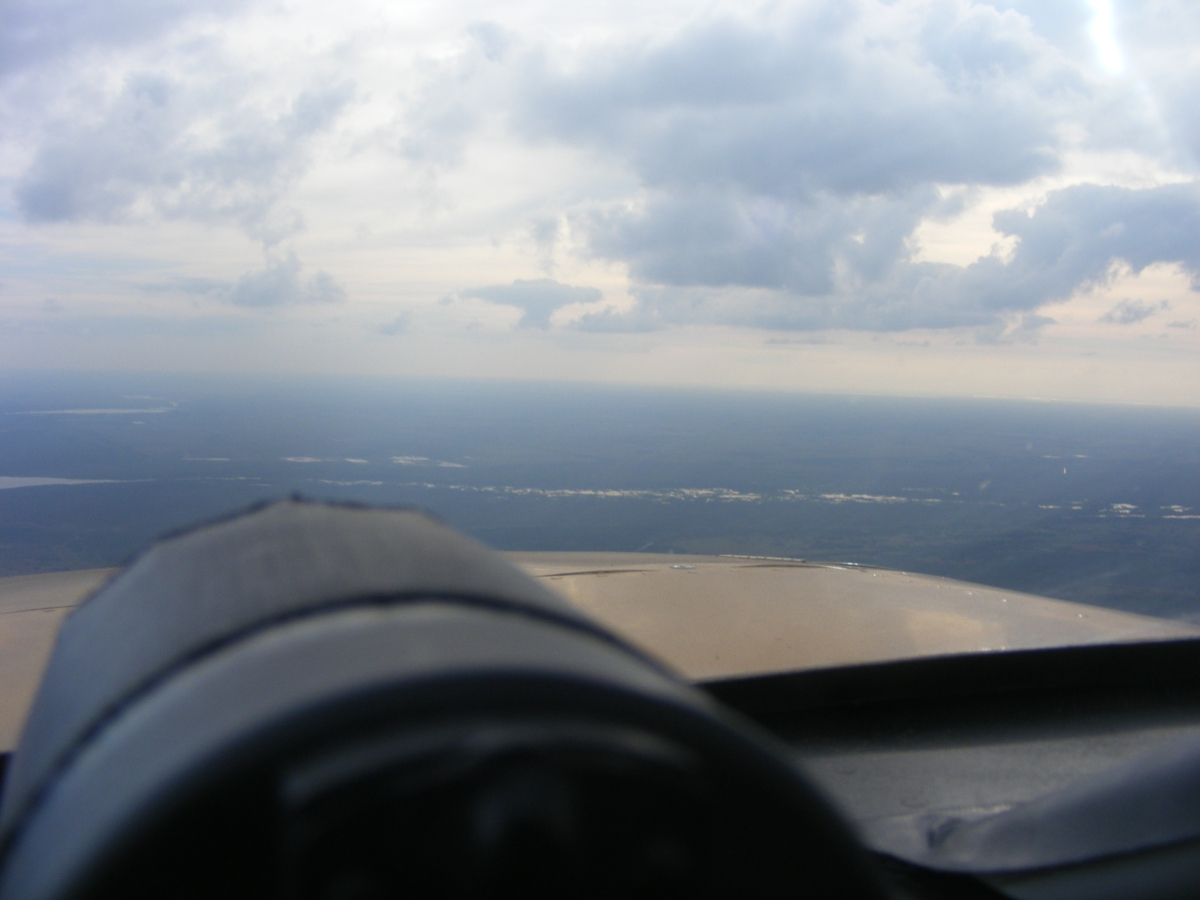 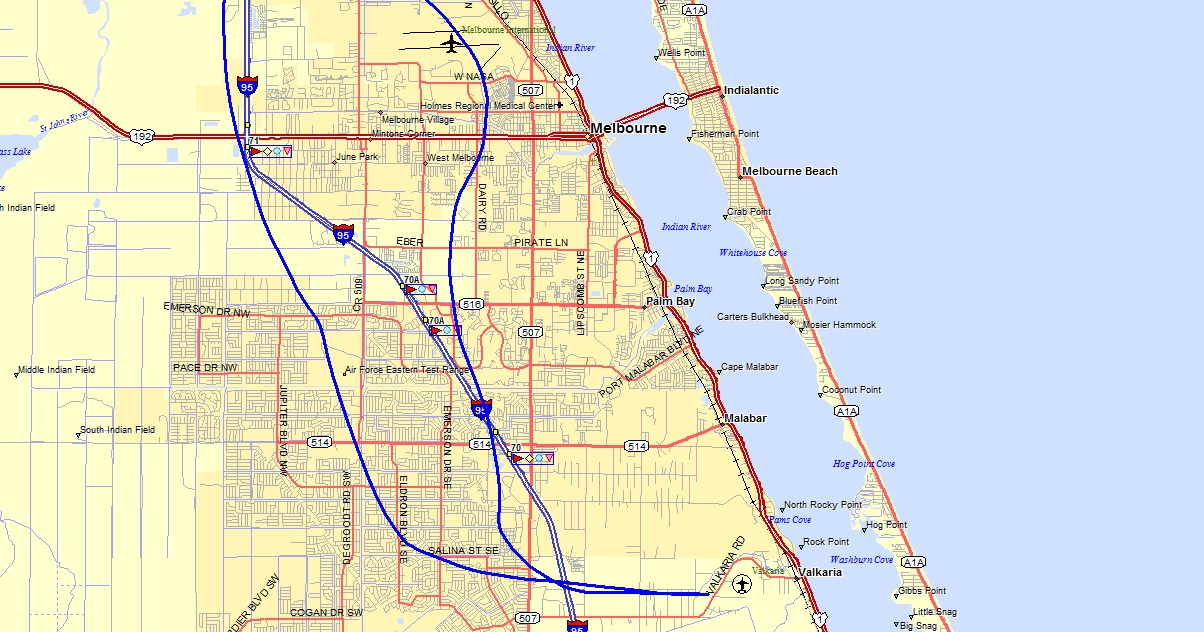 Here is the view looking north with Lake Washington west of my path as I fly parallel to Interstate 95 avoiding the Class D for Patrick Air Force Base north of Melbourne on the barrier island with the Atlantic Ocean. 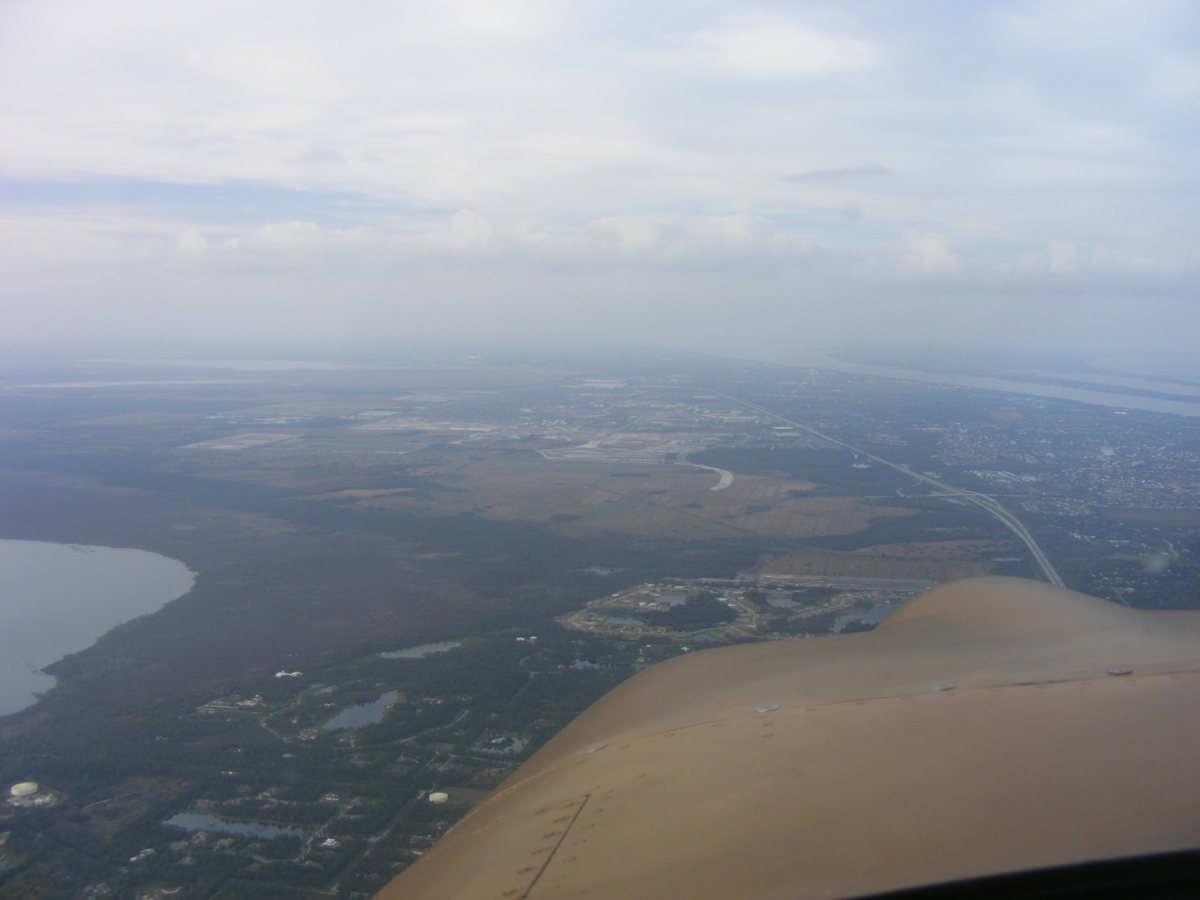 I took this second photo of Lake Washington before starting my descent toward Rockledge.  It is the first major lake as the Saint John's River begins its winding path north toward Jacksonville and Mayport, Florida where it ends at the Atlantic Ocean.  The autopilot was keeping me on course as I took this photo. 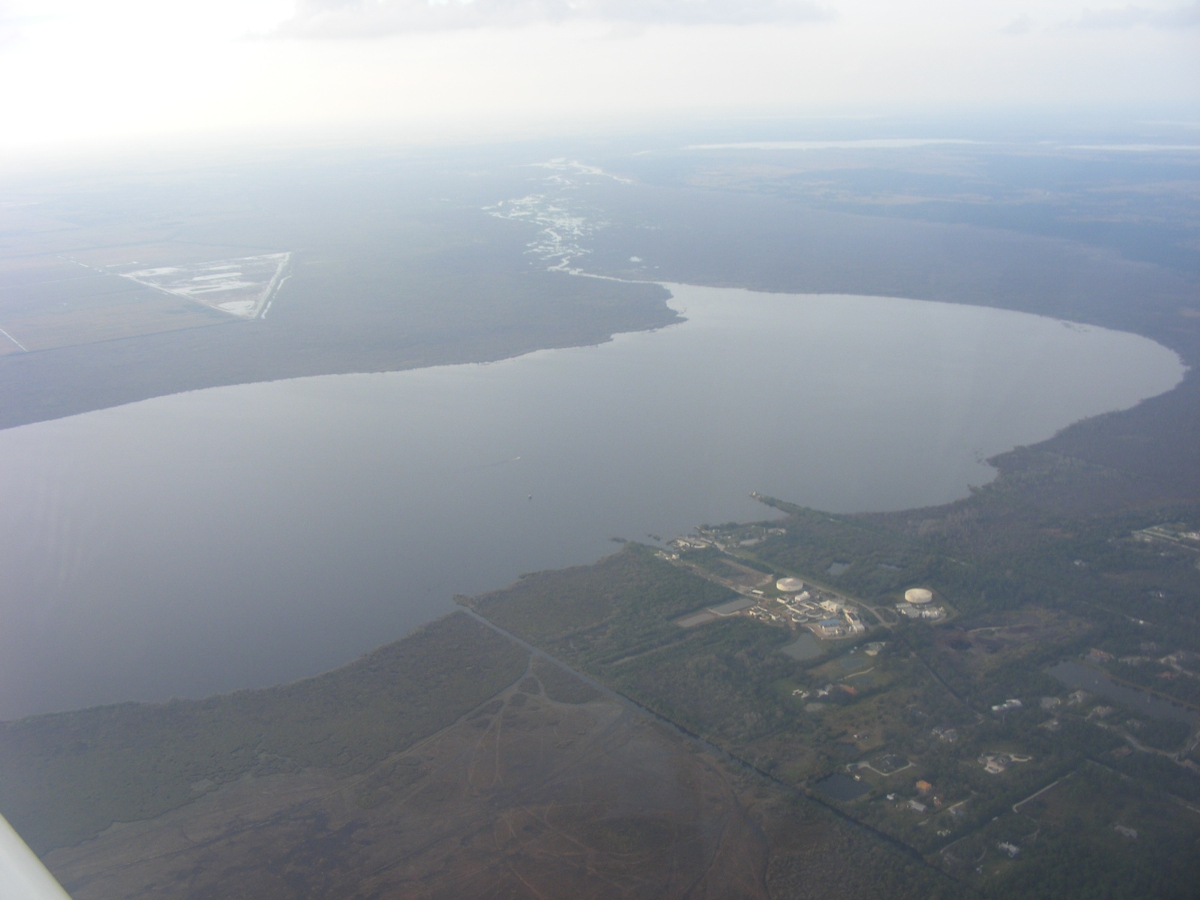 Here is my GPS ground track for the departure southbound at the beginning of the flight and the return that passed just west of the field before I turned to enter the pattern at the Merritt Island Airport (KCOI) for a touch and go on runway 29.  When I returned to the Rockledge Airport, Bill had brought out one of the Aventura II amphibians and was taxiing on the runway preparing for a short flight.  I broke off the approach to runway 18 with a circle to land maneuver before going to the south end of the runway to land on 36 toward the north. 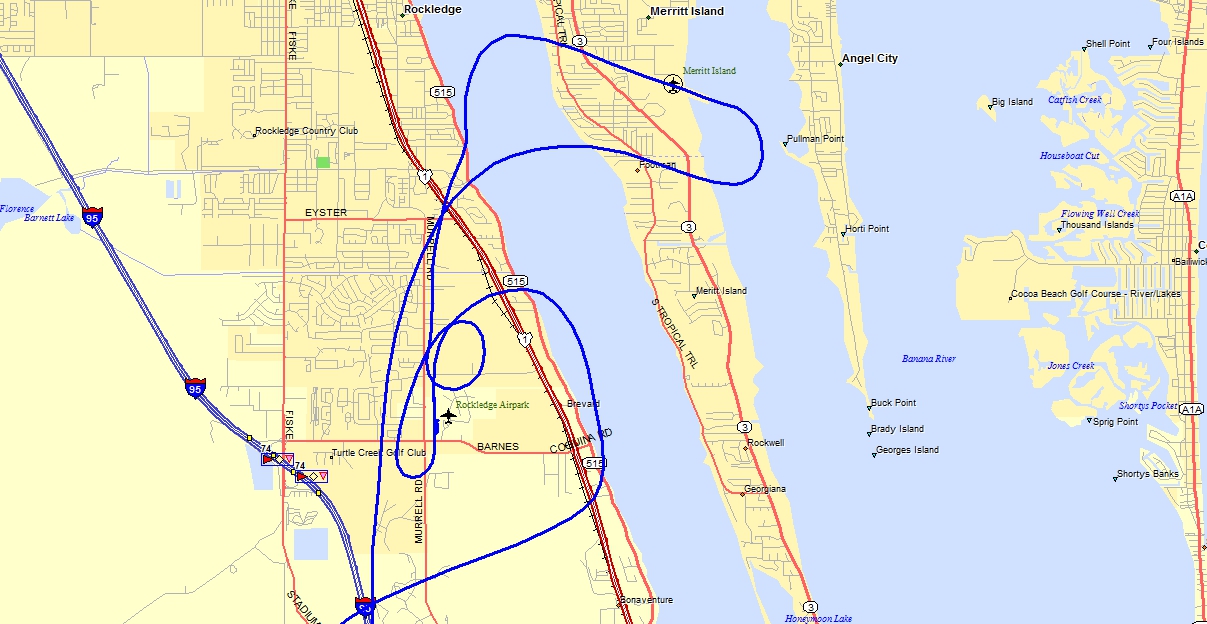 The Hobbs meter added 0.8 hours today for a total of 410.4 hours since new for Enterprise.

December 31, 2017:  One more flight today to end the year in bright BLUE skies as I left home heading for the airport.  I checked the oil in my airplane engine and put in one quart to bring the level up to FIVE quarts.  Any more than that oil level can be blown out the oil vent.  The oil pressure has been fine on the last couple of flights.  My variable pitch prop is controlled by oil pressure from the prop governor via the BLUE KNOB on the instrument panel.   These clouds were off shore as I head north while I am passing over Interstate 95 with my camera pointing East. 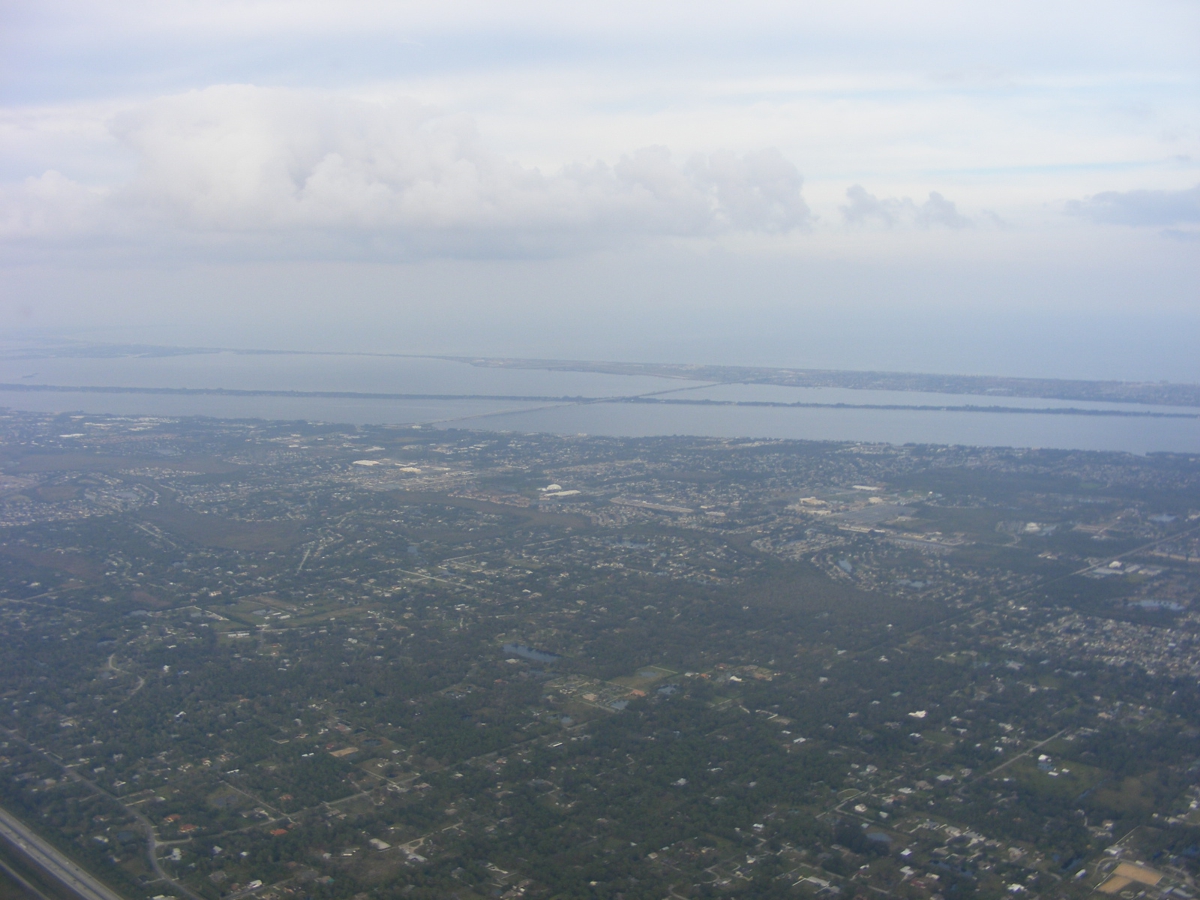 Here is the flight path today North to Massey Ranch Airpark with a touch and go then heading back south to Arthur Dunn Airpark for a full stop landing, then back to the Rockledge Airport. 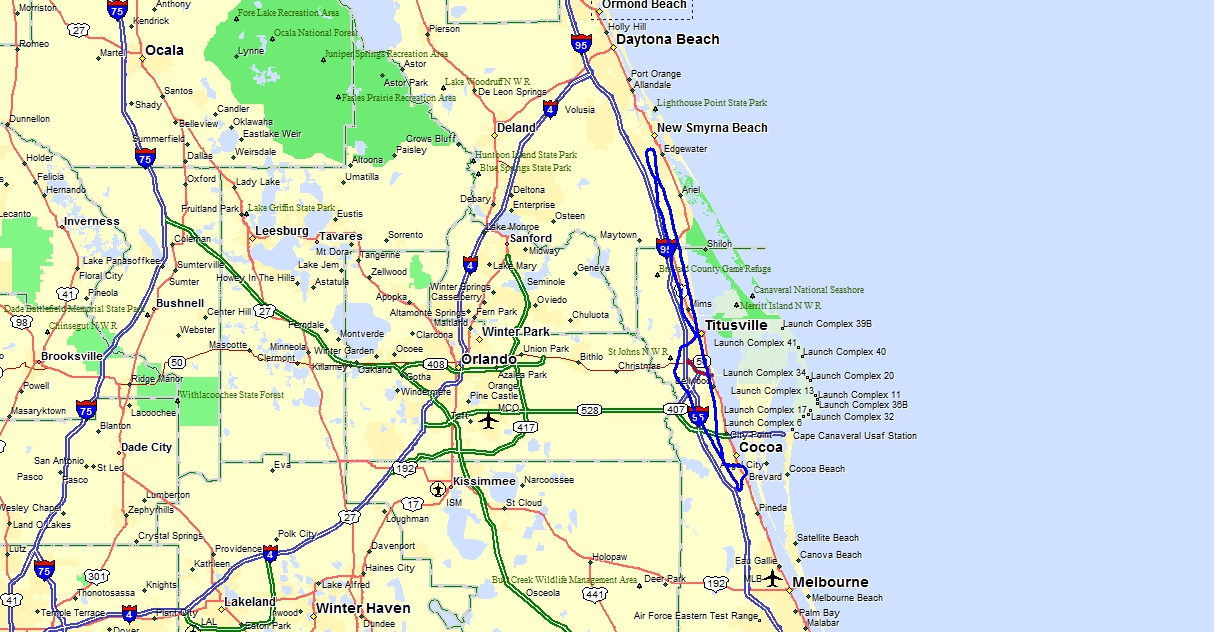 The path from the Indian River Lagoon to the Halifax River for the Intracoastal Waterway is getting boat traffic as I fly north above the mainland. 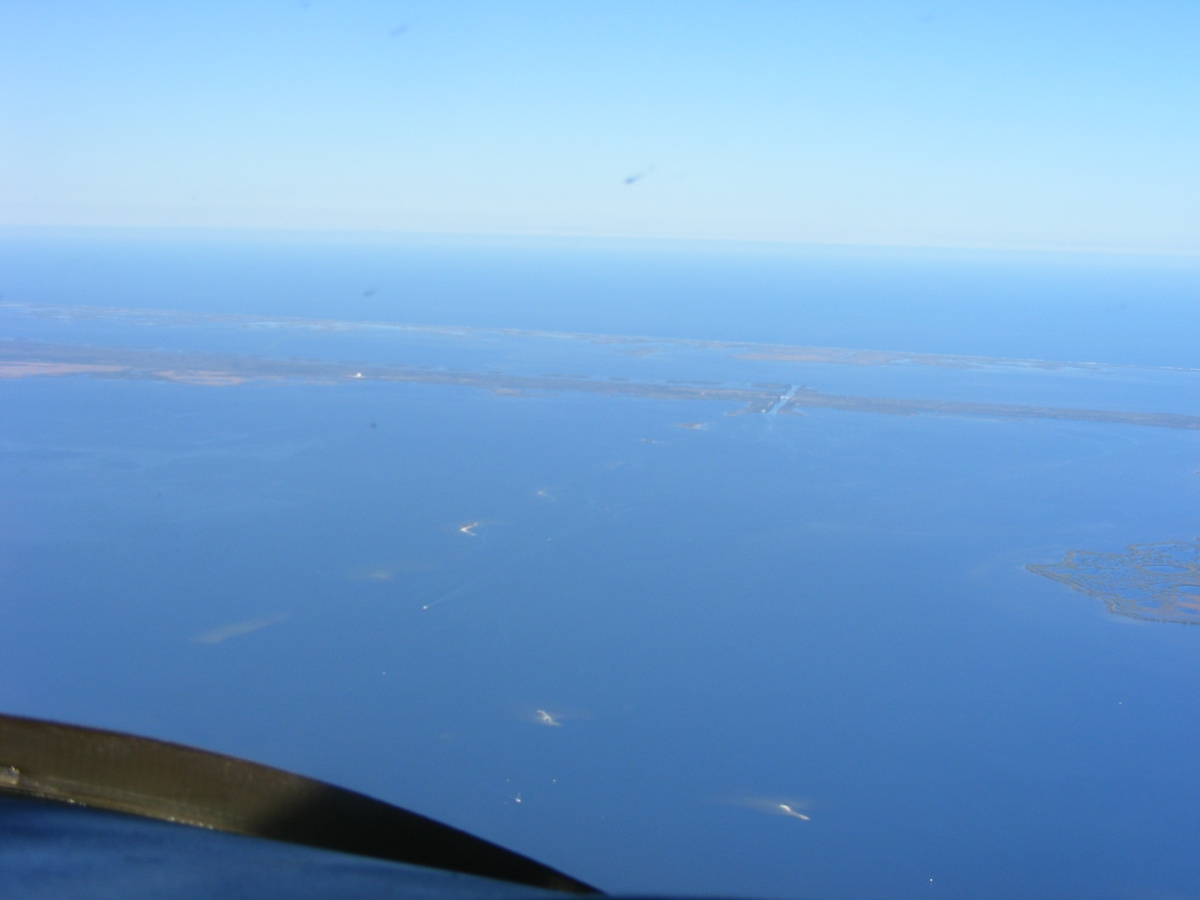 I pointed by camera back toward the Shuttle Landing Strip and got lucky with this photo. 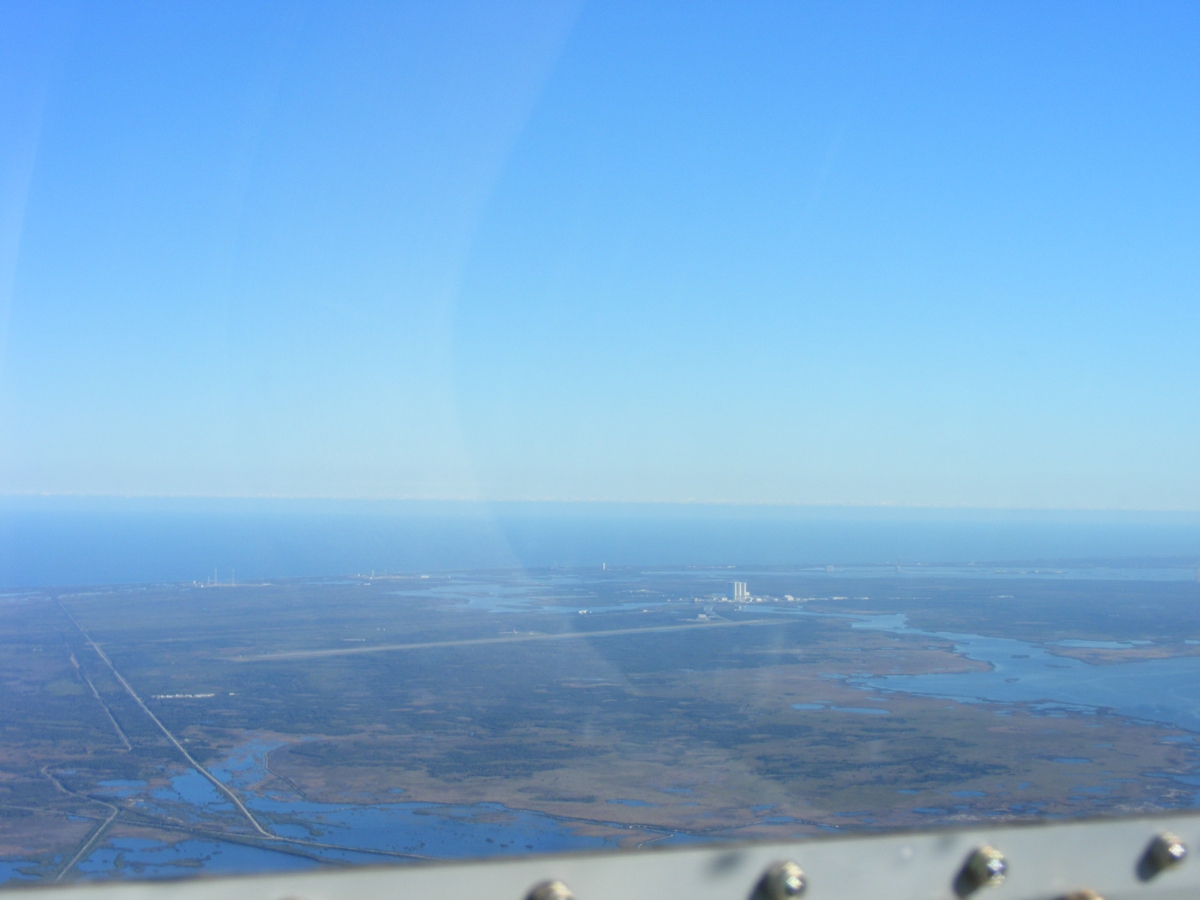 This is my path in and out of the Massey Ranch Airpark. 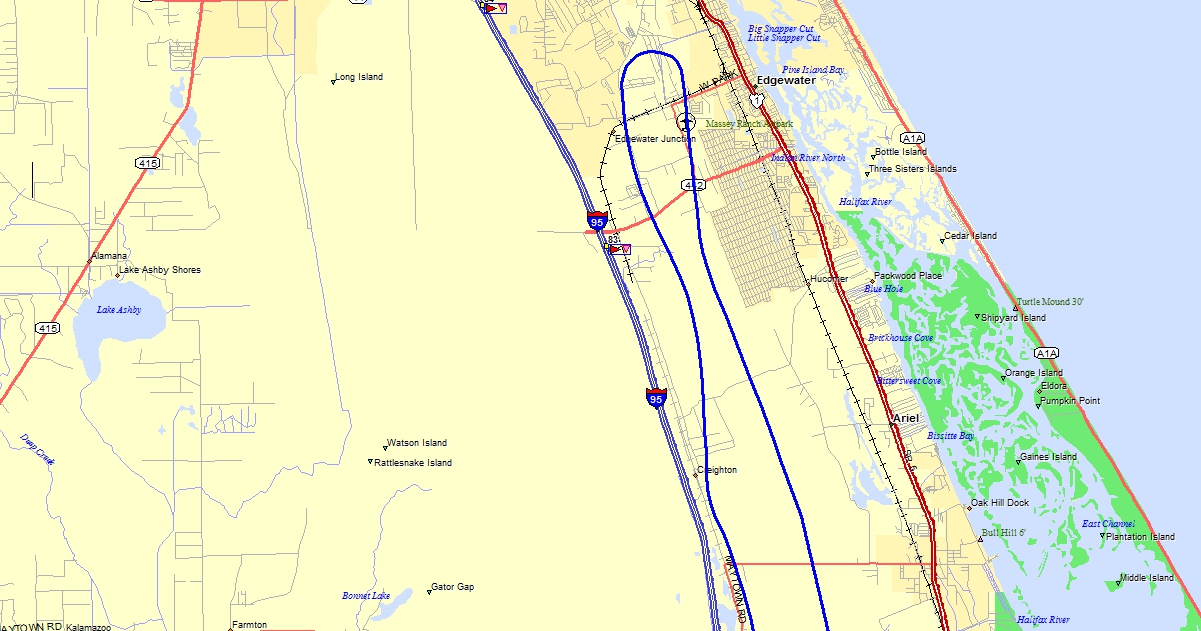 That street down there could also be a landing strip.  It is really an OLD DIXIE HIGHWAY segment north of Titusville. 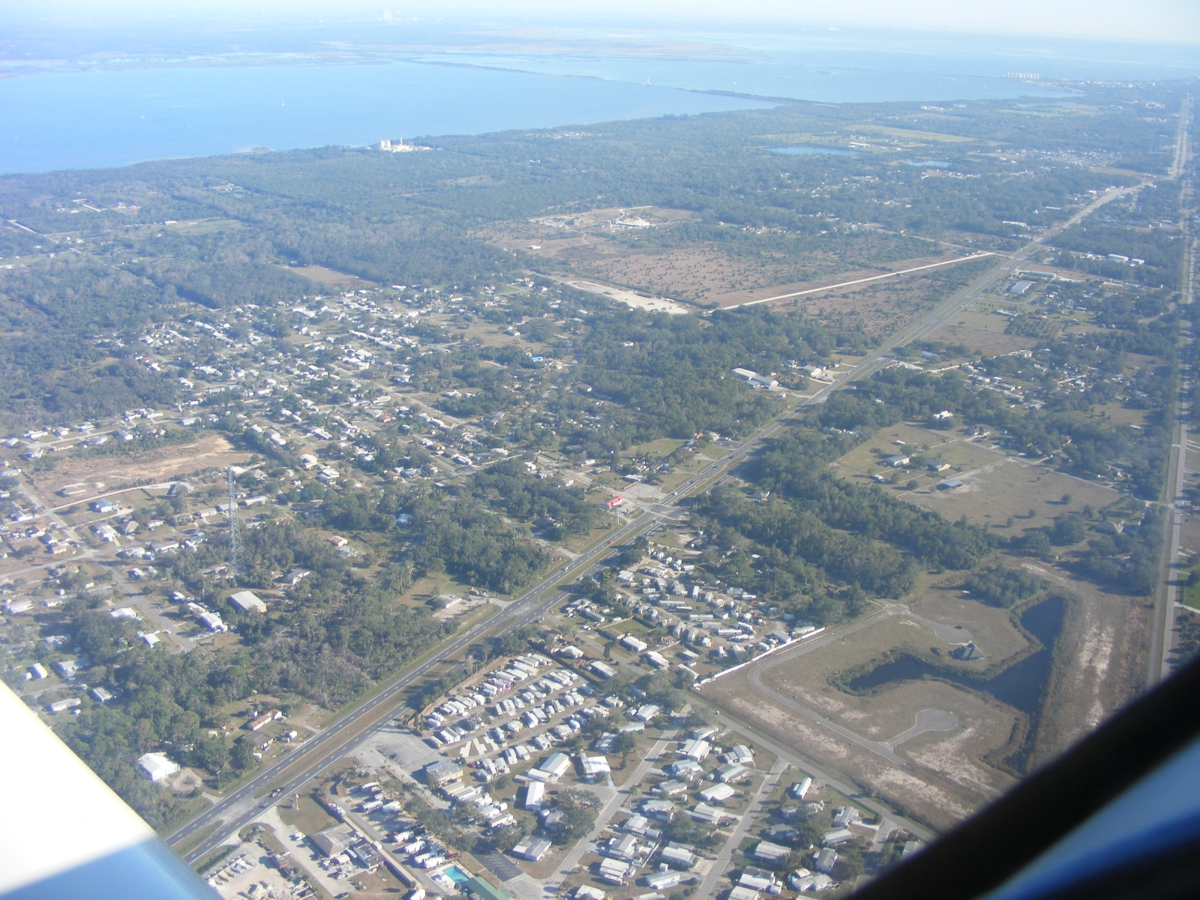 Arthur Dunn Airpark is still a few miles away.  I called on their CTAF and got no answer from the ground or any aircraft that might be up high with a load of parachute jumpers. 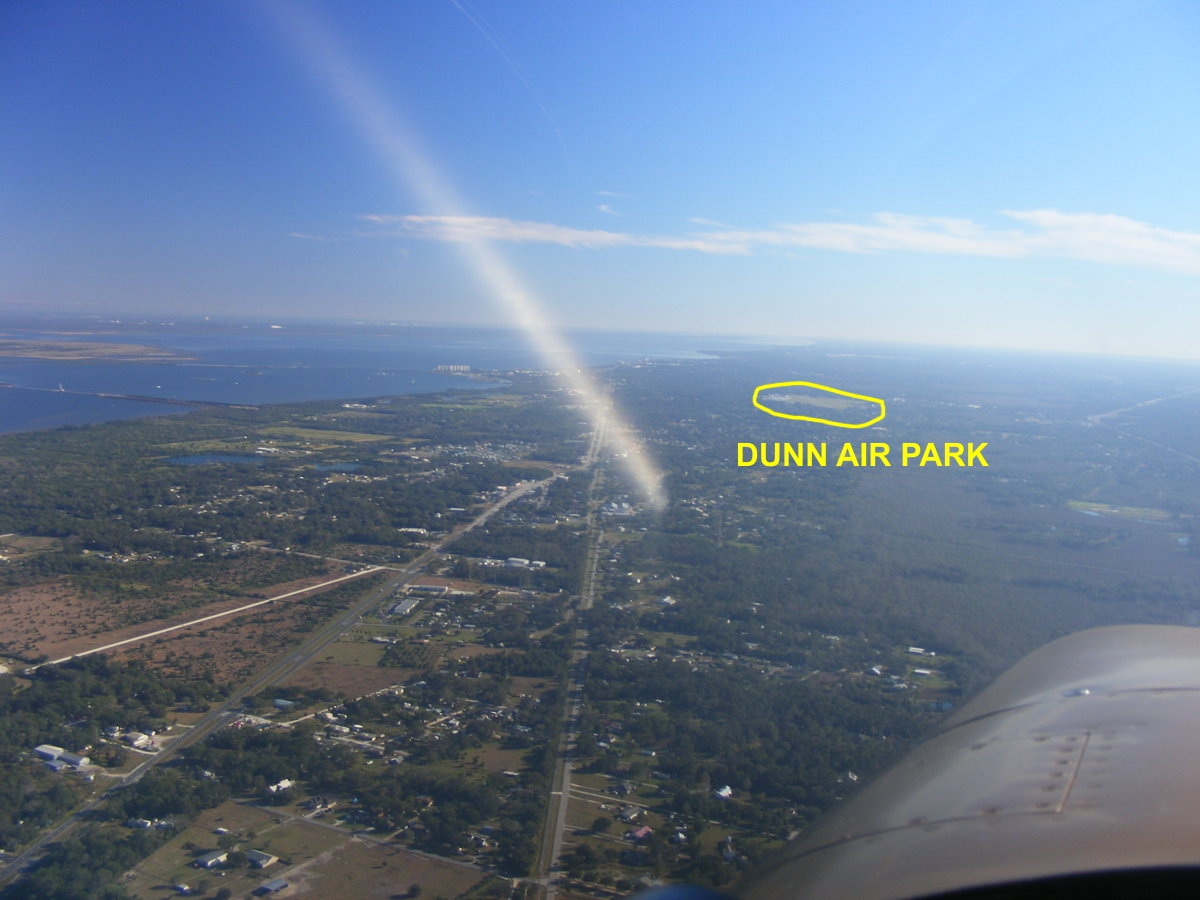 I landed on runway 15 for a full stop and taxied back to the north end of the runway for takeoff.  My ground track is seen here.  When I was in the air again, I turned west to be on the west side of I-95 and started climbing to get past the Titusville Executive Airport (KTIX).

This photo was taken southwest of the airport as I engaged my autopilot for the last few miles back to Rockledge.  I am satisfied my NavAid wing leveler is working normally. 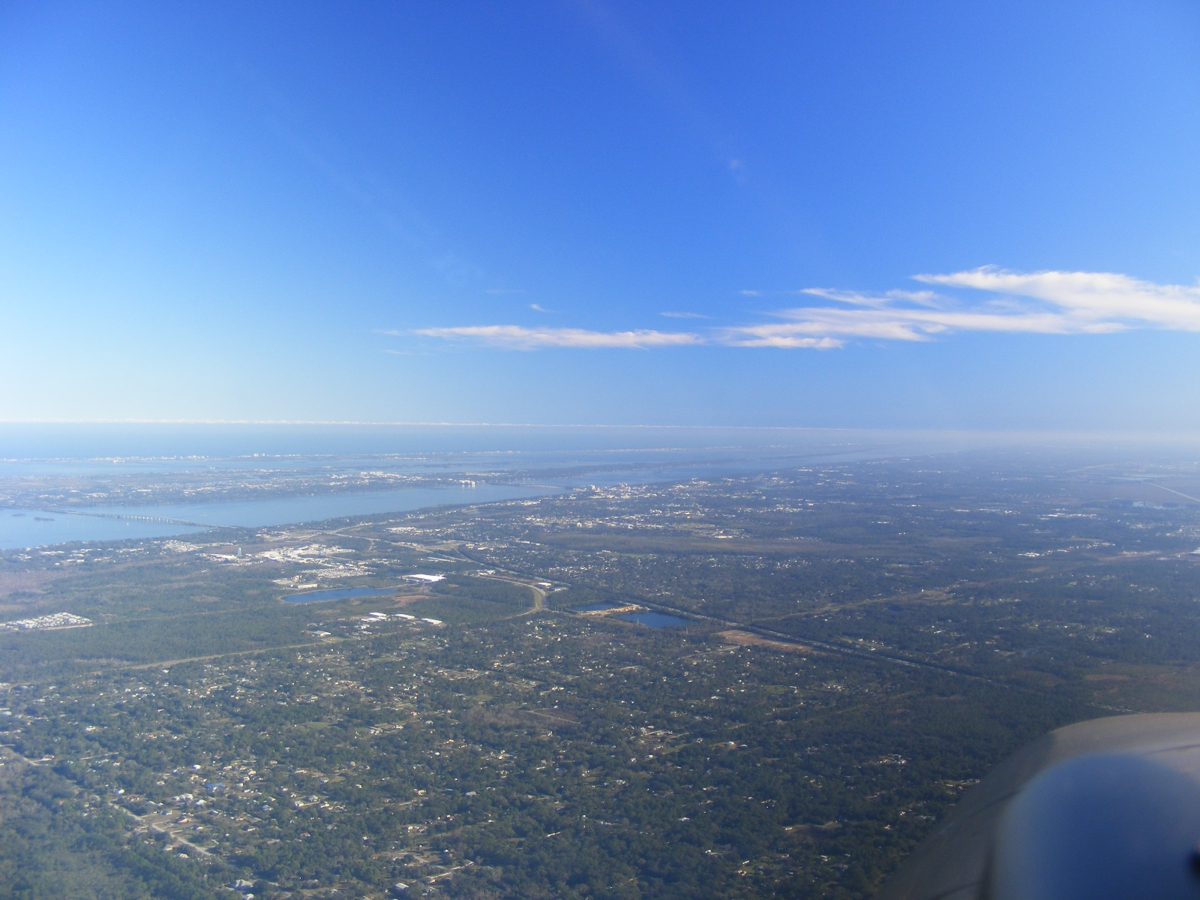 That is Lake Poinsett where Bill does water landings for Aventura II student pilots. 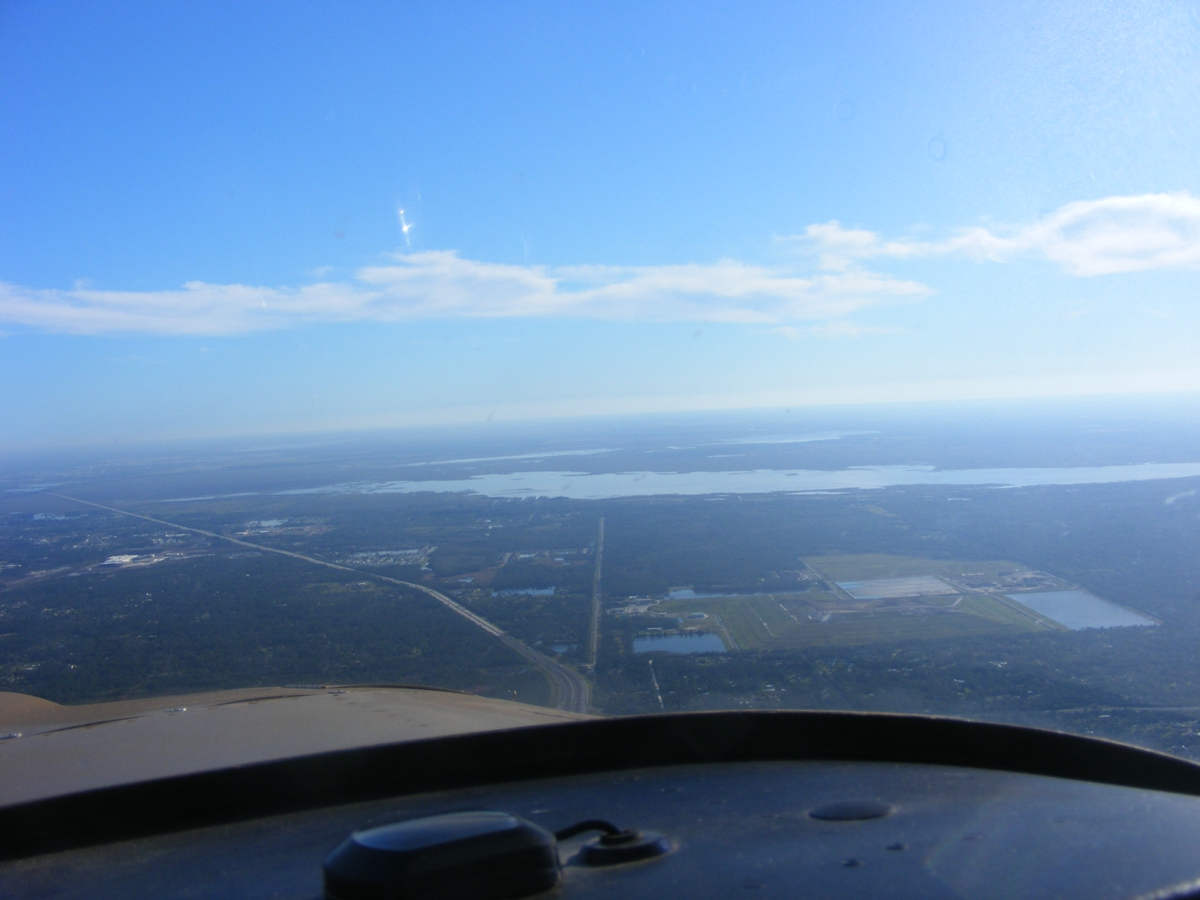 The landing back at Rockledge was from the south.  I have opened the hangar to push the gyro copter out before I can put my airplane back in the southeast corner of the hangar. 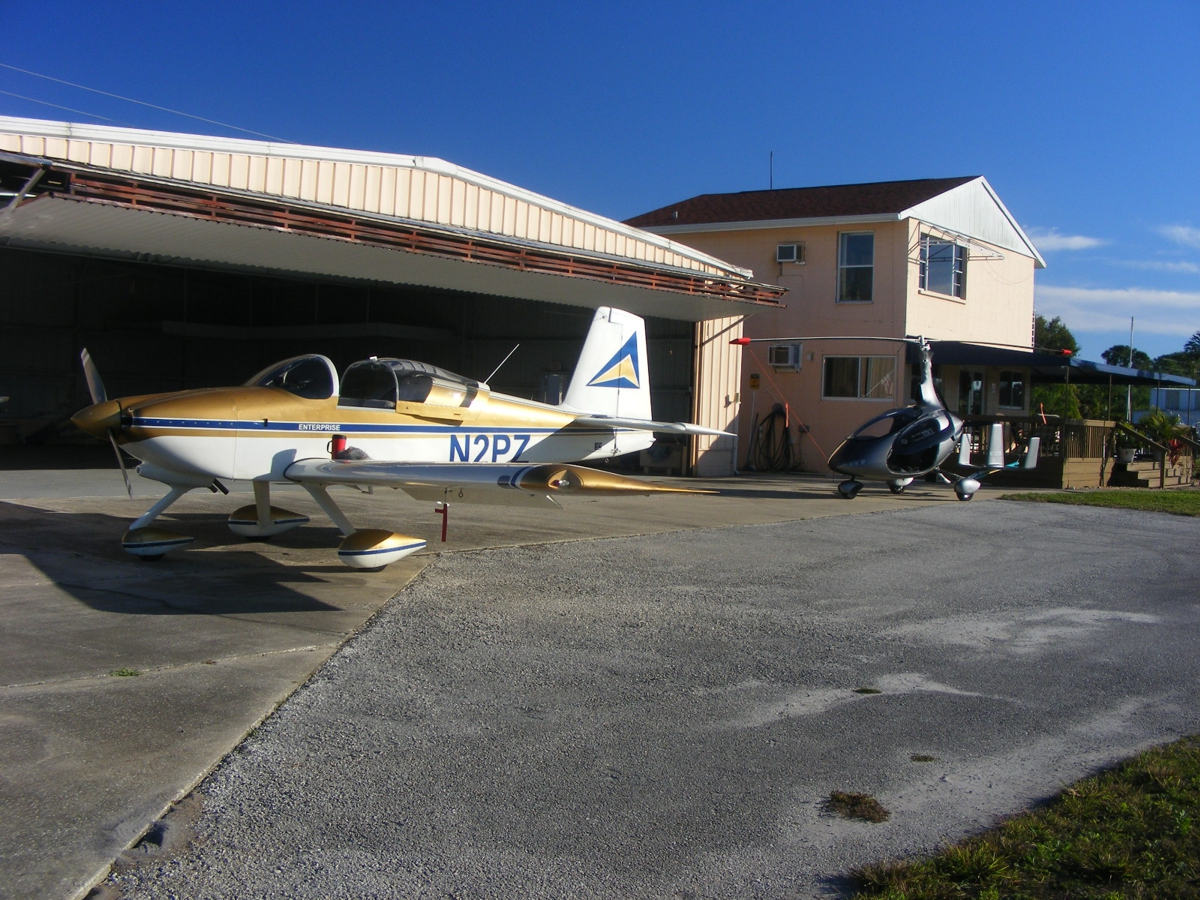 The Hobbs meter added 1.0 hours for a total of 411.4 hours total time on the engine and air frame.