March 18, 2017:  I have jumped the gun using the word "Spring" in the title of this page, but with good reason.  The "ENTERPRISE" was airborne today for the first time since March 5, 2016. I went up to the Rockledge Airport for the flight and found my main battery was discharged to around 10 volts.  My trickle charger for the airplane had been unplugged.  That wiring change I made to keep the Dynon internal battery charged has come home to roost.  Billy has a digital-controlled battery charger with a 6 ampere charge rate that was perfect to plug into my 12-volt accessory power connection with a 10-amp fuse.  I went to get lunch and by the time I got back, the battery was reading over 13 volts.  When I was airborne it was just after 1:30 PM.

Today's flight was a fuel run to the airport at Umatilla, Florida.  I climbed up to 6,500 MSL to get above the haze and turbulence, even in low wind conditions.  I took the easy route flying around the Orlando Class B airspace on the north side and staying just south of the R-2910 restricted airspace known to the locals as the bombing and gunnery range located in the Ocala National Forest.  I was all alone at the Umatilla Airport (X23) where 100 octane low-lead AVGAS was priced at $3.45 per gallon.  A cirrus SR22 landed as I was finishing up at the fuel pump.  I did not take any photos here today.  Here is my Street Atlas USA map showing the GPS ground track for the flight segments.  The ride back was the reverse course I flew coming up from Rockledge.  I made a touch-and-go landing at the Merritt Island Airport (KCOI) before heading home to the Rockledge Airport. 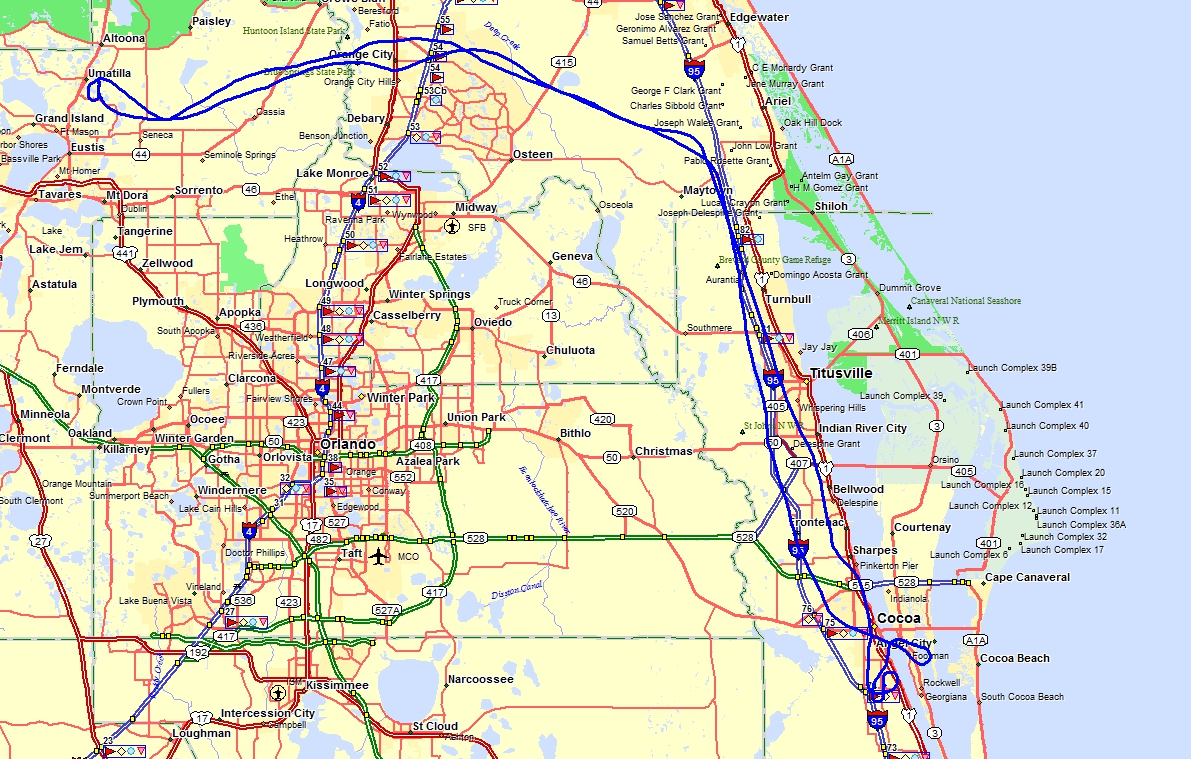 I flew back home with a maximum altitude of 7,500 MSL to get above the haze into smooth air.  Thermal heating of the air raised the smooth air about 1000 feet from the time I left and returned.  The image below shows the town of Titusville, Florida with a railroad causeway and draw bridge going from the mainland to Merritt Island.  The railroad serves the Kennedy Space Center.  It is seen just ahead of the leading edge of the left wing.  The space shuttle landing strip and the vertical assembly building (VAB) was built to assemble the Saturn 5 moon rocket in the 1960's.  The building is 500 feet tall.  The Saturn 5 was 363 feet tall and sat on a transporter steel super structure, all of which were moved by a huge crawler that could keep the rocket vertical as it moved up an inclined roadway to the launch complex 39A and 39B launch sites.  That shuttle landing strip is 15,000 feet long. 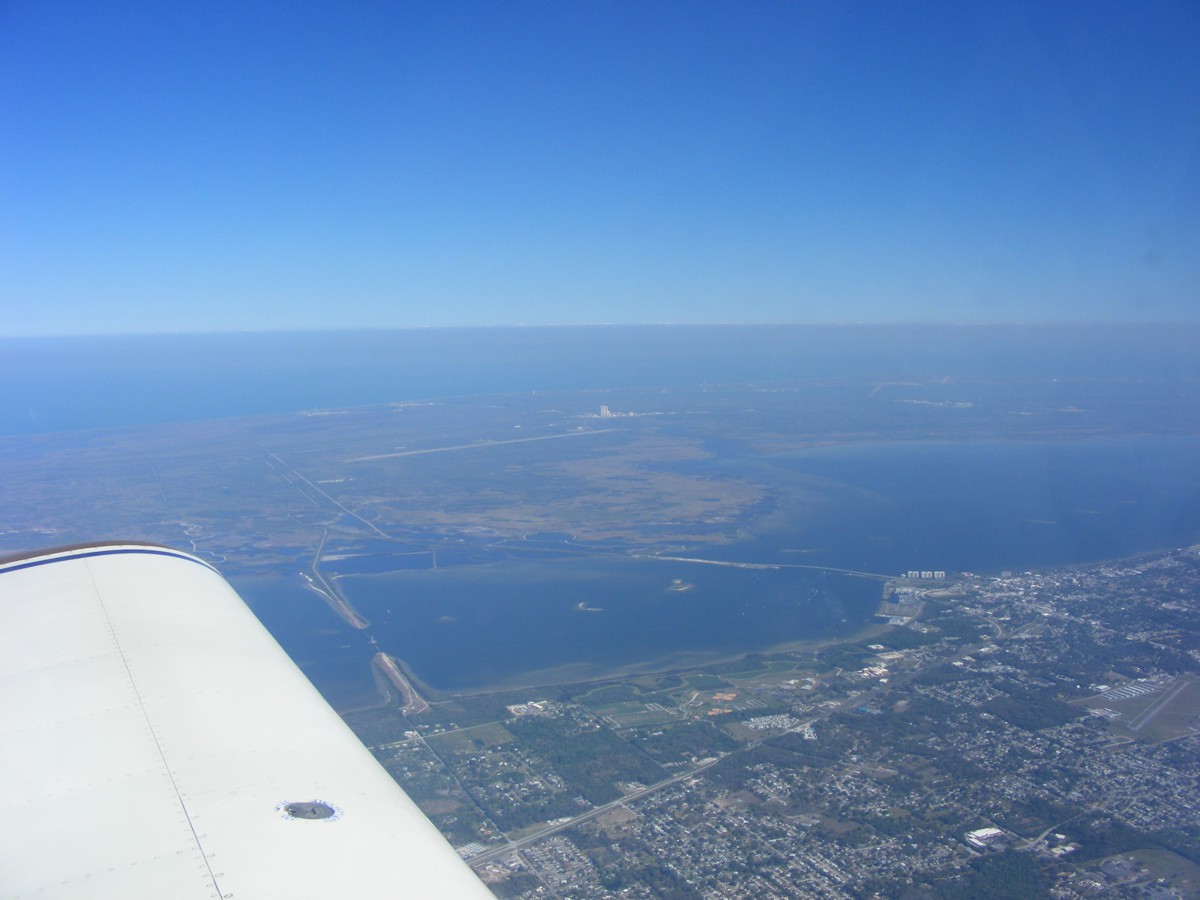 This cropped image is centered on the Arthur Dunn Airpark (X21) that sometimes has sky diver activity here.  I fly down the river or west of Interstate 95 to stay away from this uncontrolled air field that can have air space issues above it.  Titusville Executive airport (KTIX) is at the right edge of this image near the Indian River lagoon with only US 1 separating the airport from the river.  I-95 crosses the lower right quadrant of this photo. 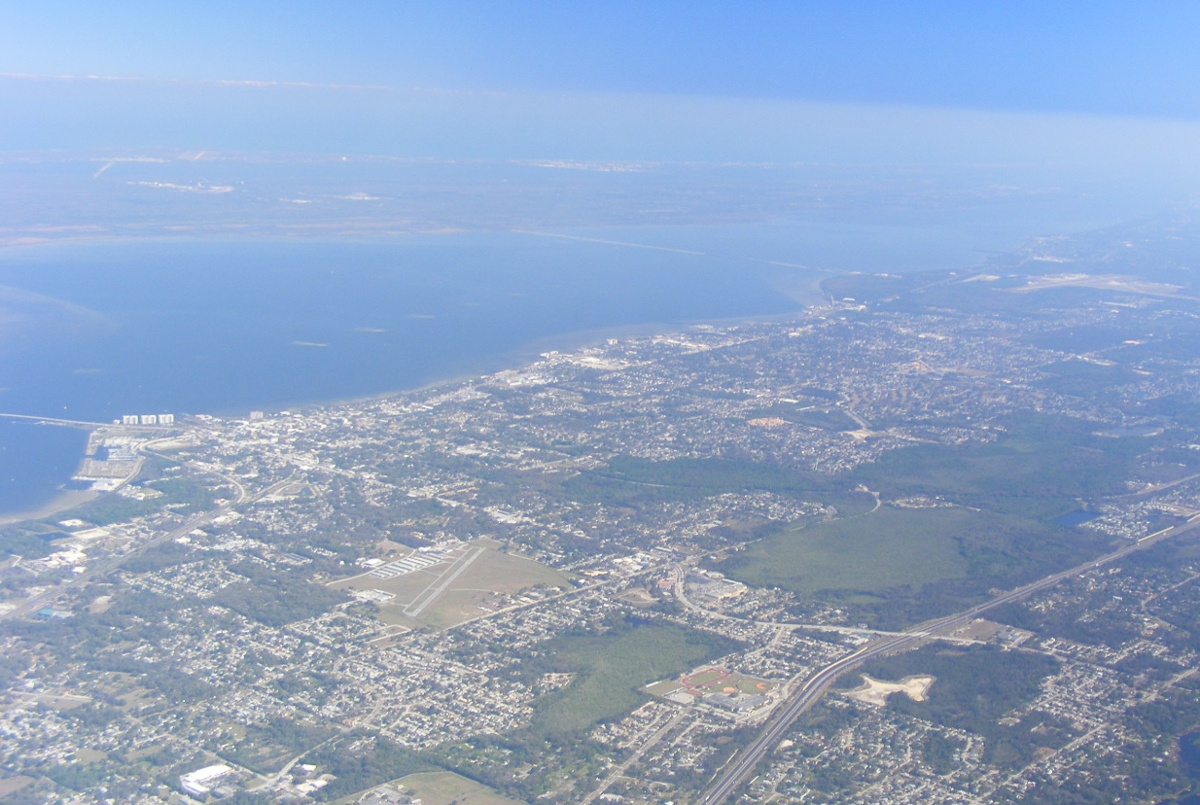 The view ahead from 7,500 feet MSL shows the top of the hazy atmosphere layer with Interstate 95 disappearing under the haze ahead.  The reflection off the inside of my windshield shows the steel center brace bar not seen in this photo. That brace bar connects to the steel roll bar that secures the plexiglass windshield. 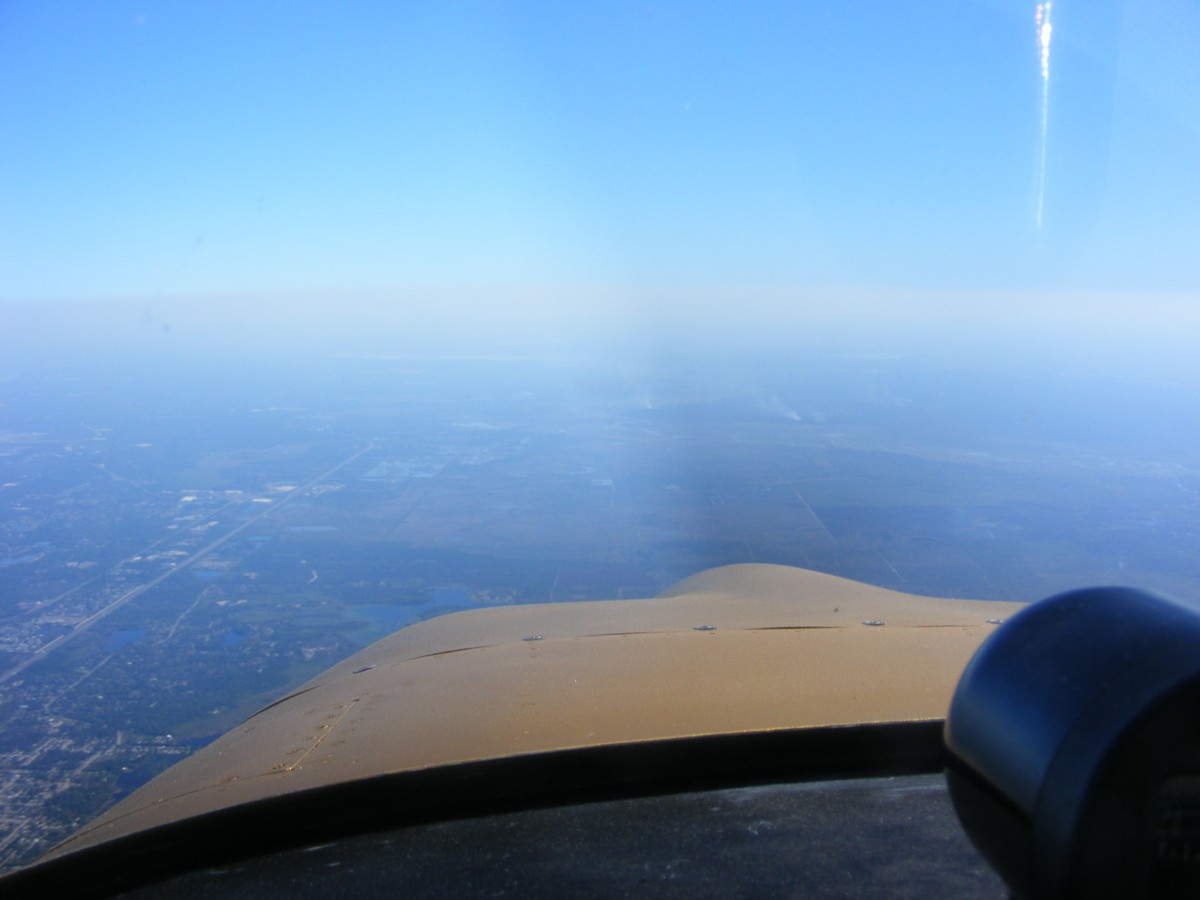 There was a 10 MPH cross wind when I was landing and it was less than a perfect touch down.  The Hobbs meter added 1.7 hours today for a total of 382.3 hours. 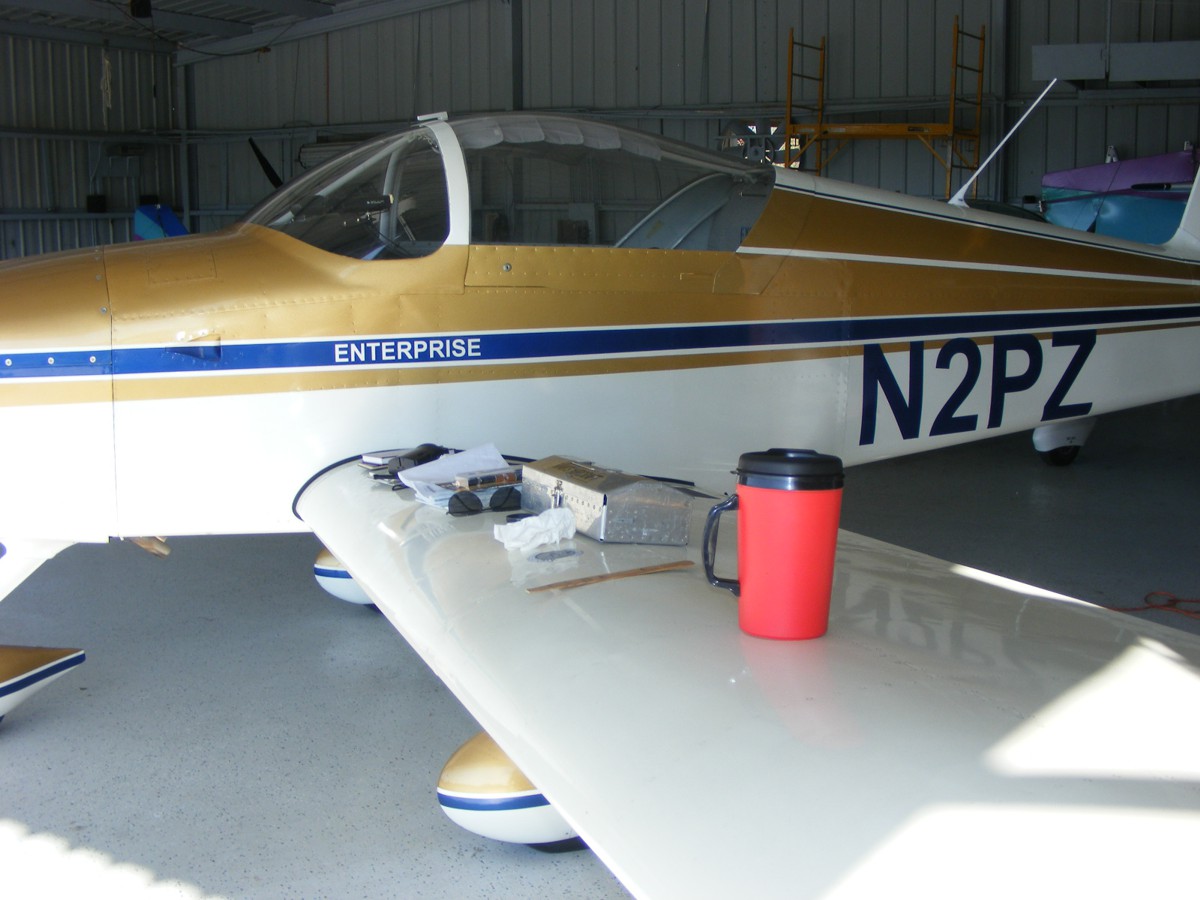 This page was published on Sunday, March 19, 2017.  More to come soon as I can fly anytime again.  My new medical certificate does not expire until September 30, 2017.  I will begin using the new BASIC MED certification this summer under the new FAA rules.

March 26, 2017:  Here is my usual Sunday posting about work done yesterday on my RV-9A "Enterprise" at the Rockledge Airport.  I had planned to get in another flight yesterday, but the winds were 12 to 14 MPH cross wind from the East.  It would not have been a good morning to fly.  I used my creeper to get under the fuselage to check for oil, brake fluid, fuel leaks, etc. as a result of the flying I did last week.  I was also cleaning down there, including the wheel pants  That flight was the test flight with my annual inspection since I had not flown for over a year.  I check my NAV radio localizer / glide slope function every time I fly over the Titusville Executive Airport (KTIX). 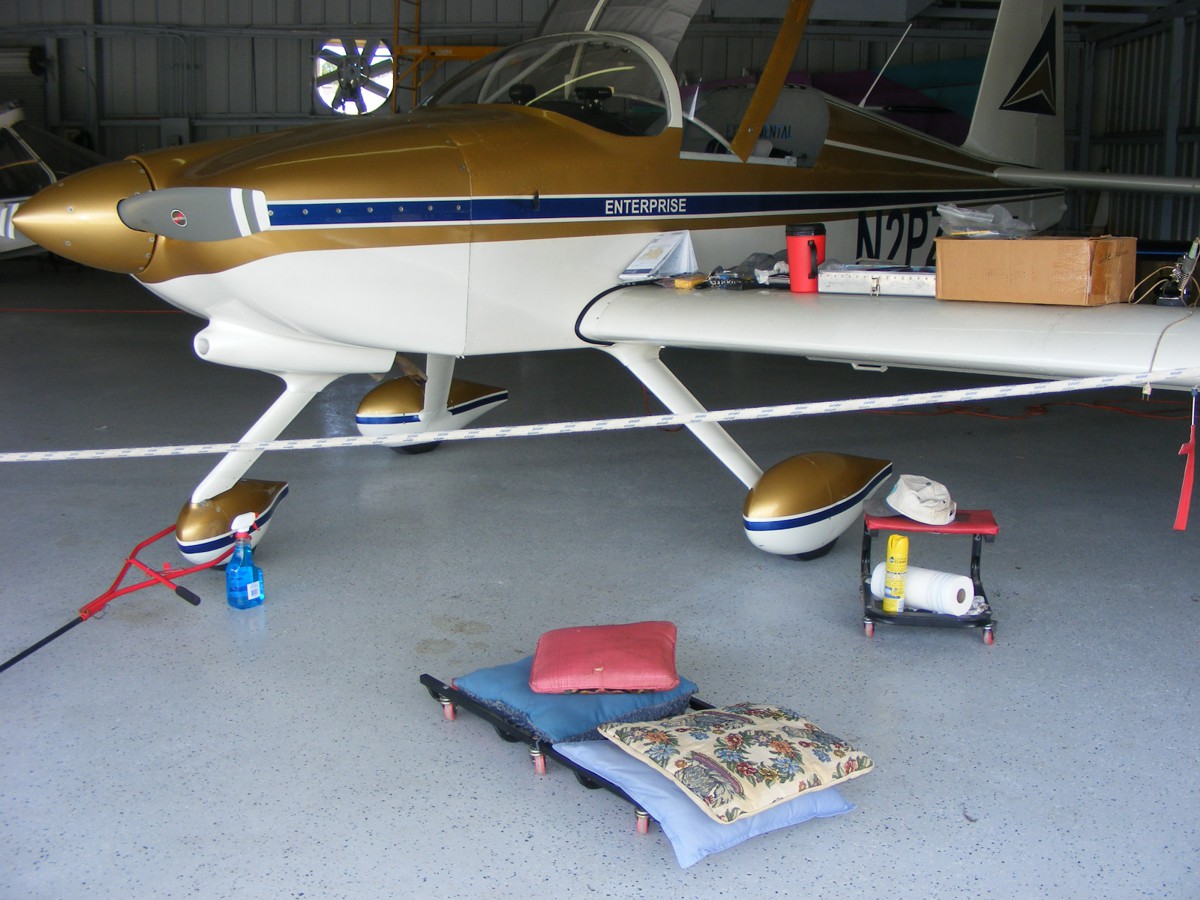 I tested the ELT and it was still working, but I wanted to change the batteries as I did not remember when the current batteries were installed.  The old ones were installed in June 2007.  I checked each battery and found a couple of them were weak, and several were still at 1.55 volts.  I put in SIX fresh batteries with an expiration date of 2025. 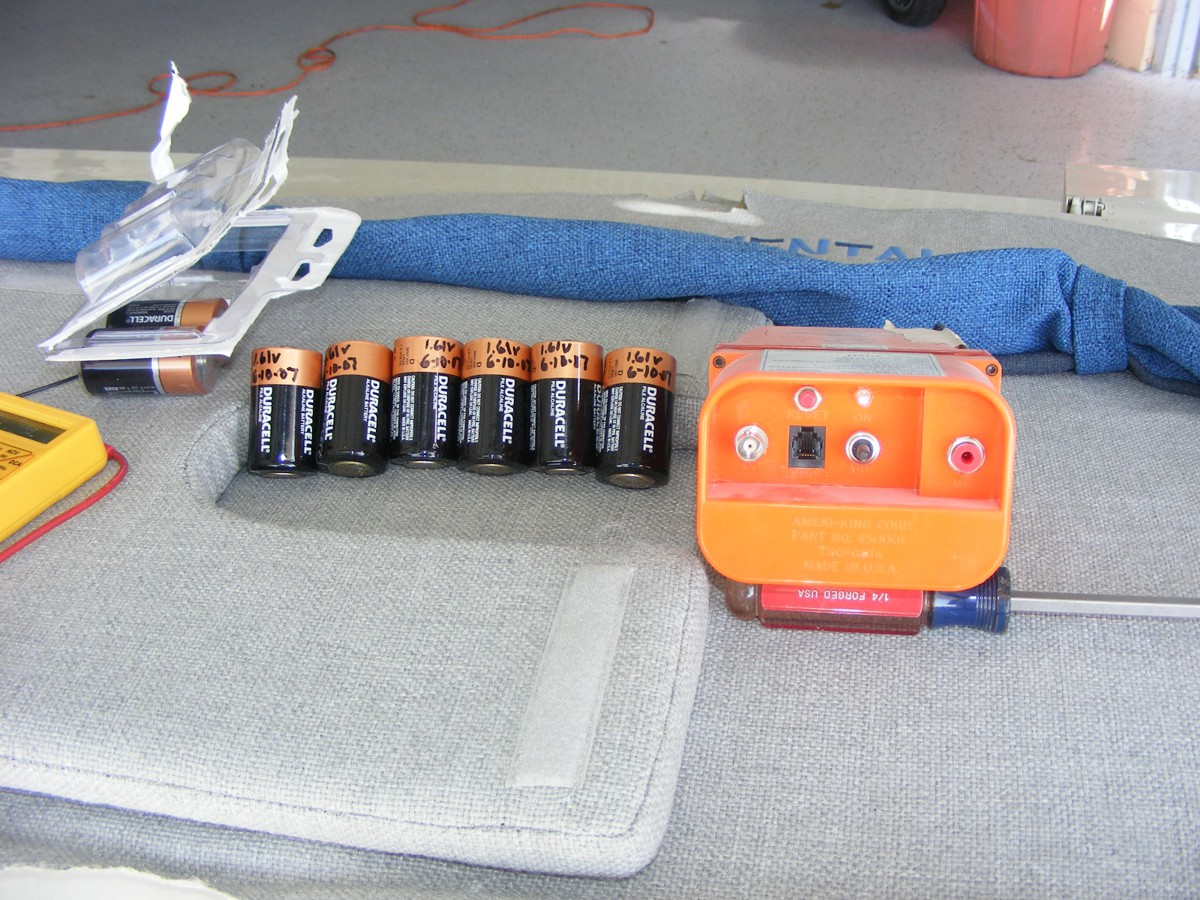 I had to remove the baggage bulkhead wall to get into the rear area.  I took this photo when I had the unit out on the wing as seen in the photo above.  There is a lot of dust back there and of course the green tint of primer on the vertical bulkheads.  The airplane will be flying 12 years since the first flight on June 9, 2005.  I really had to figure out the correct posture to squat down in the baggage area with my hat on, and get down low enough to reach in to remove and re-install the ELT on it's mounting bracket.  You can look at PAGE 81 when the ELT was installed on January 1, 2005.  There was no DUST back there when the airplane was still under construction. 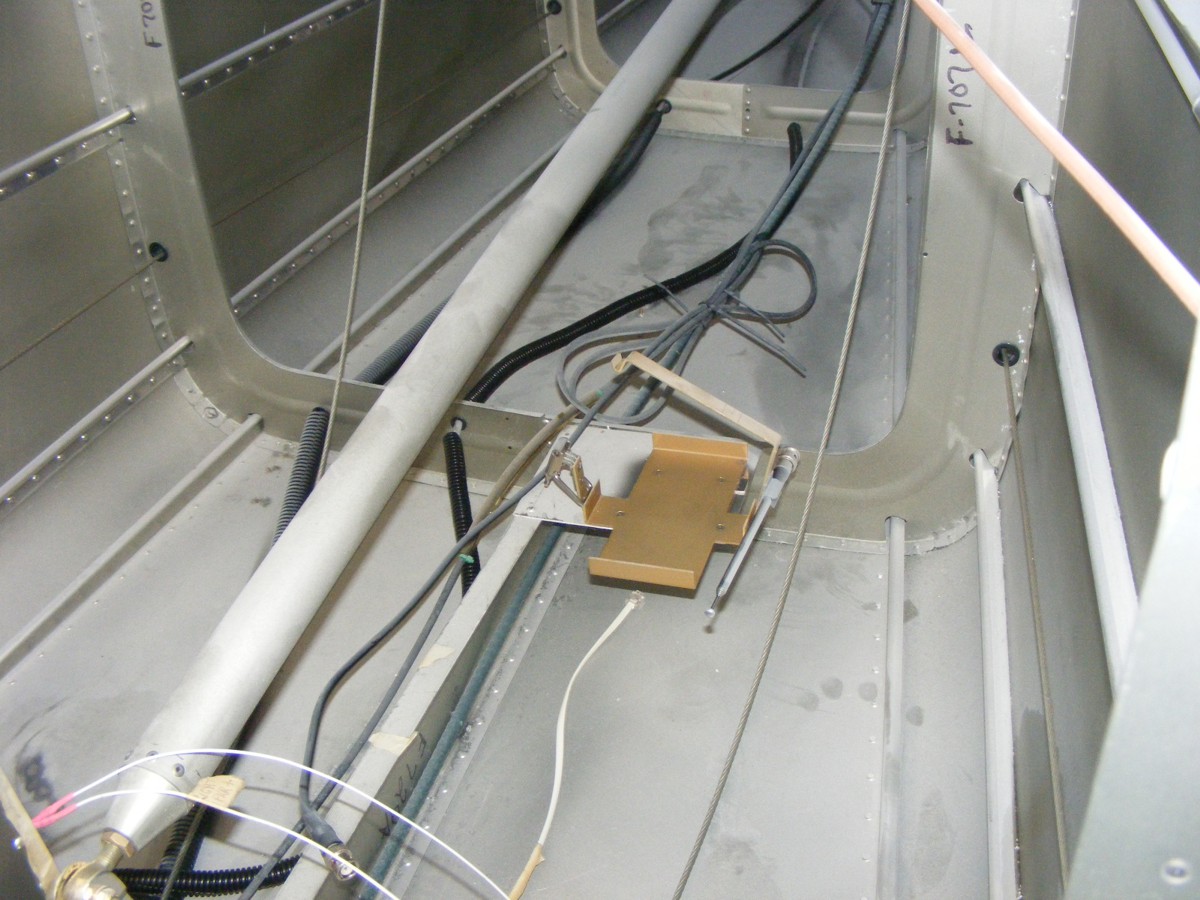 And here is the last photo of the day.  I started opening up the area behind the baggage wall after 3 PM.  When I had completed the work, the winds had calmed down, but I needed to get back home after NINE hours at the airport and lunch at Wendy's less than a mile from the Rockledge Airport.  I had the hangar locked up and was leaving the airport at 6:30 PM.  The airplane is ready for the next flight. 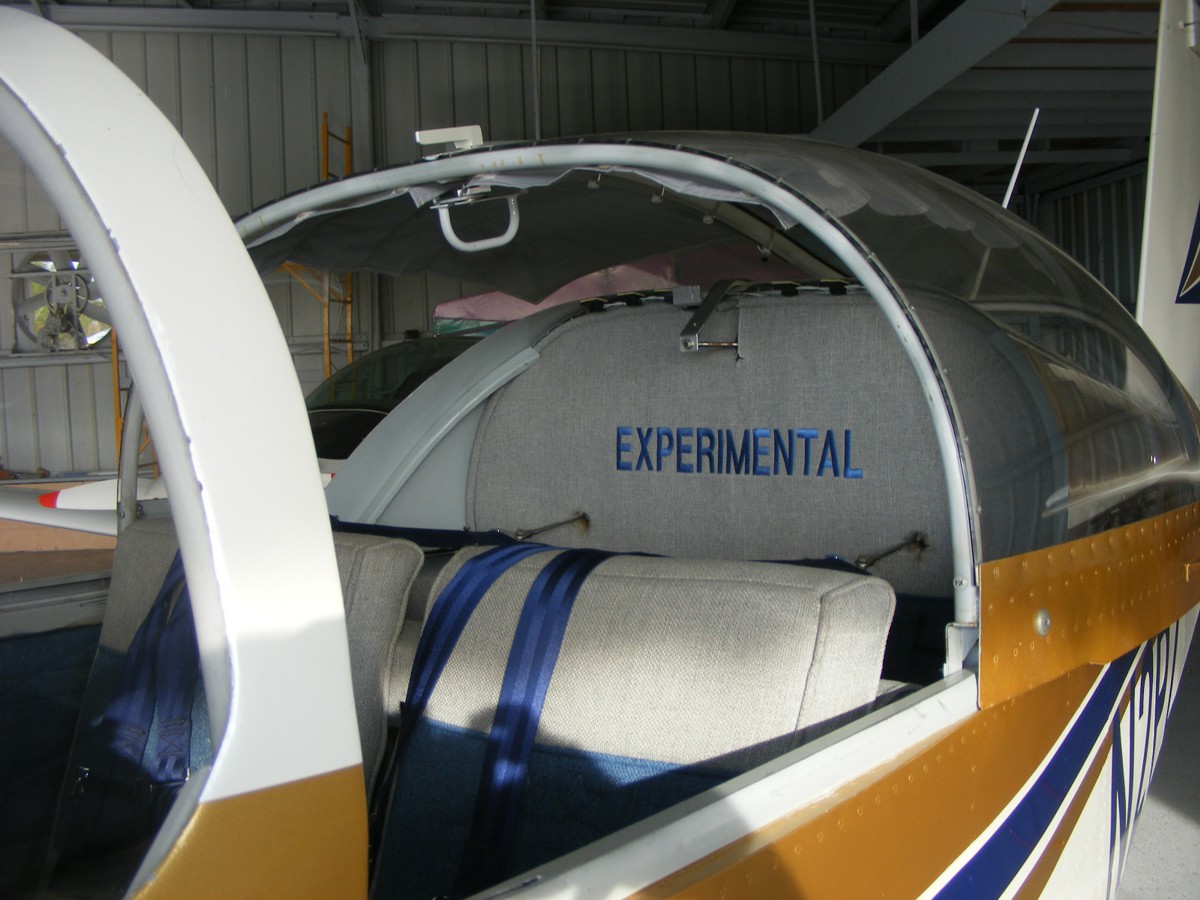 April 1, 2017:  We call it April Fool's Day here in the USA.  It was a beautiful clear day here in this part of Florida near the Atlantic Ocean.  The US Air Force Thunderbirds are here for two-day air show at the Melbourne Airport.  The airspace for the Air Show extends FIVE nautical miles from the center of the airport and up to 15,000 feet MSL.  I flew around that area on the west side over the mainland.  I did a little bit of flight seeing of the area where the Saint Johns River begins flowing north to Jacksonville and Mayport, Florida at the Atlantic Ocean with the big Navy base up there and other military airfields, some of which are now for commercial use by the public. 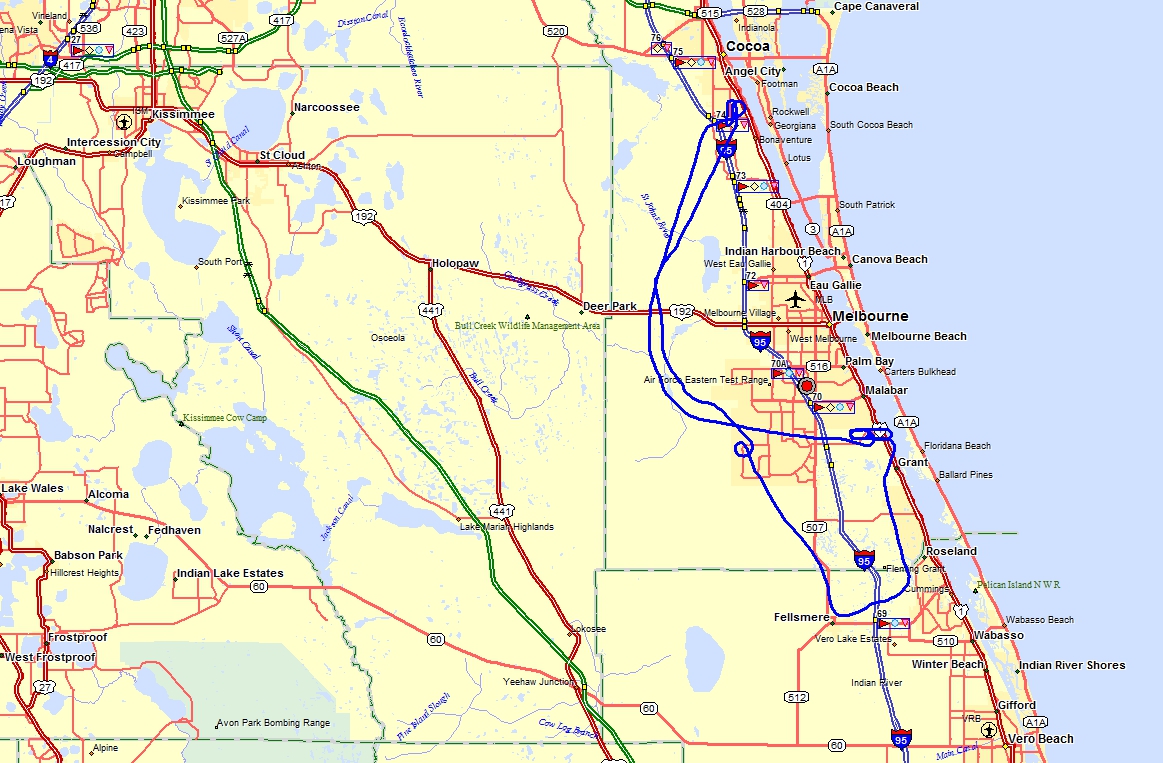 I made a full stop landing at the Valkaria Airport (X59) and smelled burning rubber in the air.  I parked my airplane near a hanger near runway 10 and checked my tires.  I touched my nose wheel to be sure it was OK and felt the tread for any wear issues, and there were none.  I took off and stayed in the pattern for one touch-and-go landing before departure.  I turned south to check out the airport at Sebastian, Florida (X26) which sometimes has parachute jumping activity.  None of that was happening today due to the wind conditions at the surface coming from the ocean at 12 to 15 MPH, while the winds above 2500 feet are blowing toward the ocean at about 20 MPH.  It was bumpy of course where those air masses were layered one over the other.  Since this was not a local flight, not cross-country, I did not climb up above the scattered clouds to the smooth air on top.

Back at Rockledge, one of the demo airplanes had returned and was parked outside the hangar awaiting my arrival.  The Sun-N-Fun fly-in is next week at the Lakeland Linder Airport.  It is the first major fly-in event of the year.  Billy will be exhibiting the two ATEC light-sport airplanes there.  The airplane in front of mine is the ATEC Faeta 322 with a Rotax 912 IS engine that runs on unleaded auto fuel.  You can learn about those airplanes via this web site:  http://www.atec-alas-llc.com/. 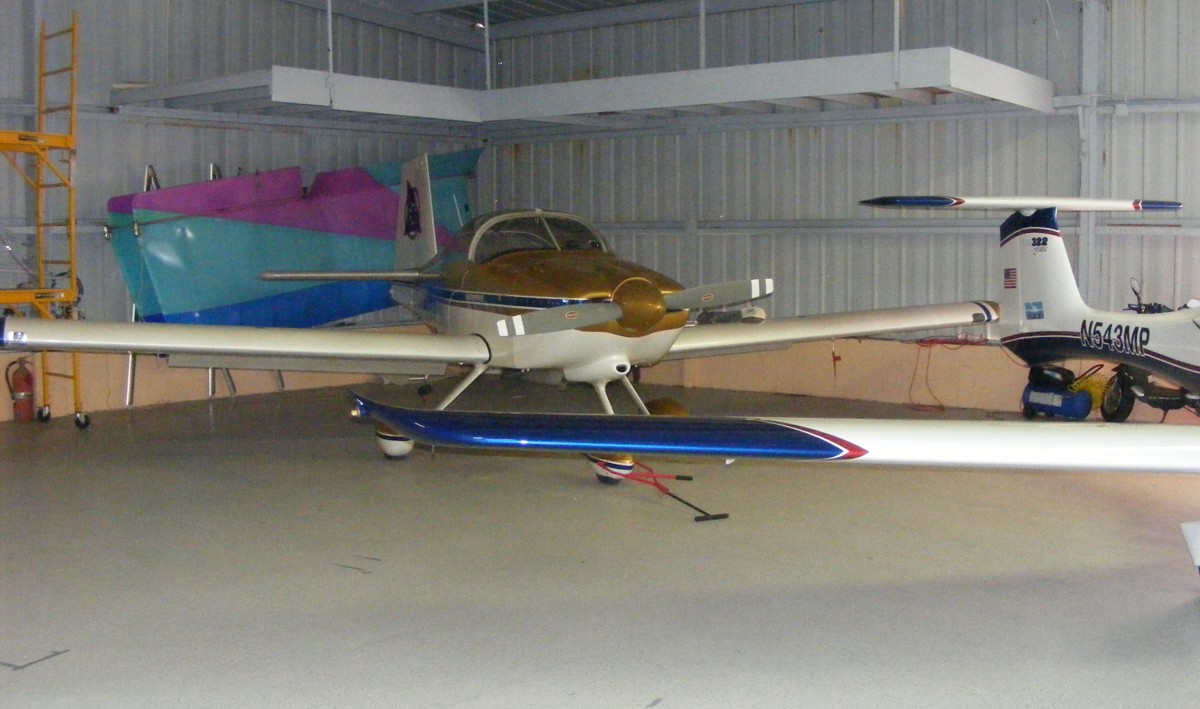 The straight line distance from the Rockledge Airport to the Sebastian Airport is about 36 statute miles.  The Hobbs meter added 1.2 hours to show 383.5 hours total flight time from the "ENTERPRISE" that is my impulse powered "starship of the imagination" with a tip of the hat to the late astronomer Carl Sagan.  He used the phrase "spaceship of the imagination" in his television specials.  As a loyal fan of the Star Trek universe, I like "starship" and "boldly going" where non-pilots have never gone before.  It's Fun and "The Joy and Freedom of Flight" is what this web site is all about.