March 19, 2016:  Here is something for all you computer guys and gals about how this web site is published.  That is why I called this page "How It's Made" back on the home page.  I updated my Virtual Box program from Oracle early this morning.  Today's update of this web site using Windows XP in a virtual computer went very smoothly and FAST.  All of the web site files and images are hosted on my Lenovo P400 laptop computer running an Intel i7 quad-core processor and 16 gigabytes of RAM in the laptop.  Windows 8 Task Manager sees the i7 as EIGHT parallel microprocessors running at 2.31 GHz as seen below.

This task manager snapshot from Windows 8.1 shows the P400 laptop resources while running the virtual computer and editing this web page before my final update to the web site today.  The actual web site you are reading is hosted on Accuweb Hosting web servers.  I am using Microsoft Front Page 98 to edit and publish this web site.   It is the same program I used for the entire life of this web site.  Take note of the 6.6 gigabytes of RAM memory in use as seen below while the virtual computer is running. 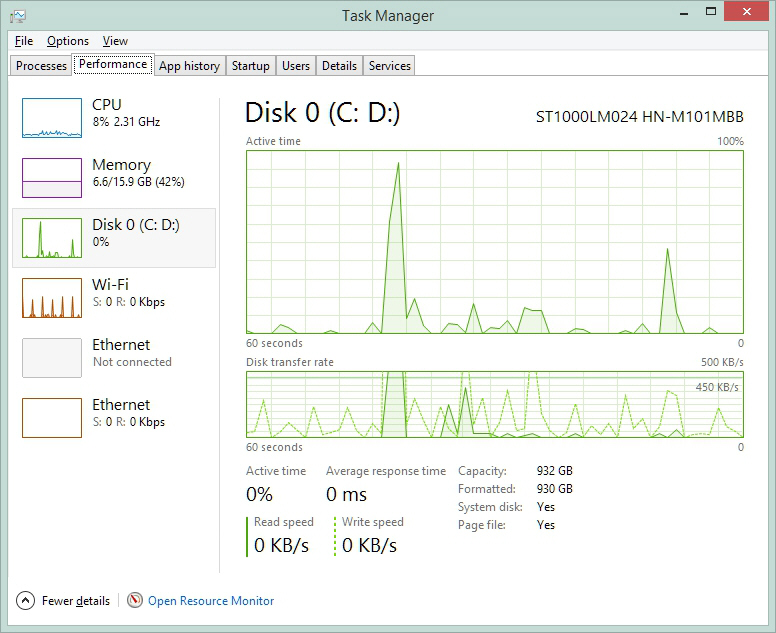 Here is the Win 8.1 Task Manager for the P400 at idle with no applications running.  I have set the Task Manager to display the CPU as the primary window here.   Notice the CPU is at 1% while I have no applications running on the real computer with 3.7 gigabytes of RAM in use.   Windows reports FOUR dual cores in the i7 microprocessor chip.  Each of those cores has TWO processors, and the total of EIGHT logical processors are shown.  That is equivalent performance to eight Intel P3 single core processors all working together on ONE BIG chip. 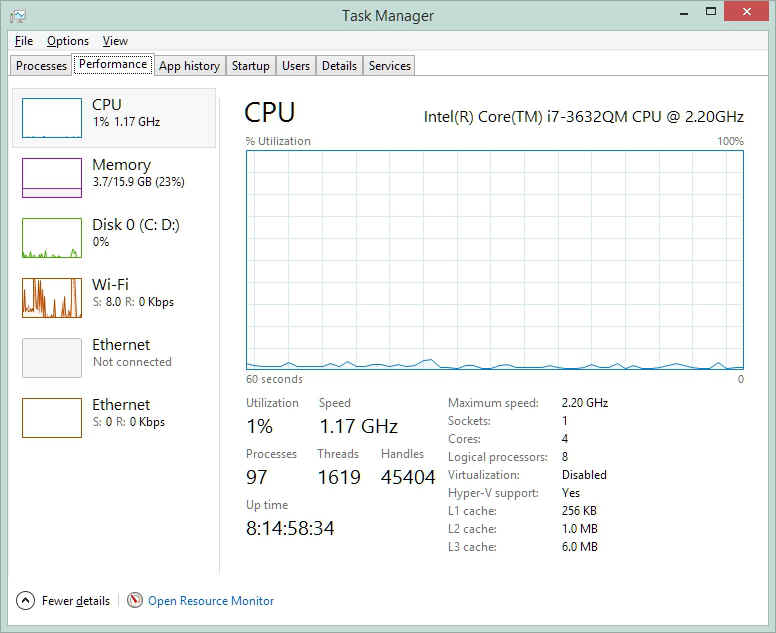 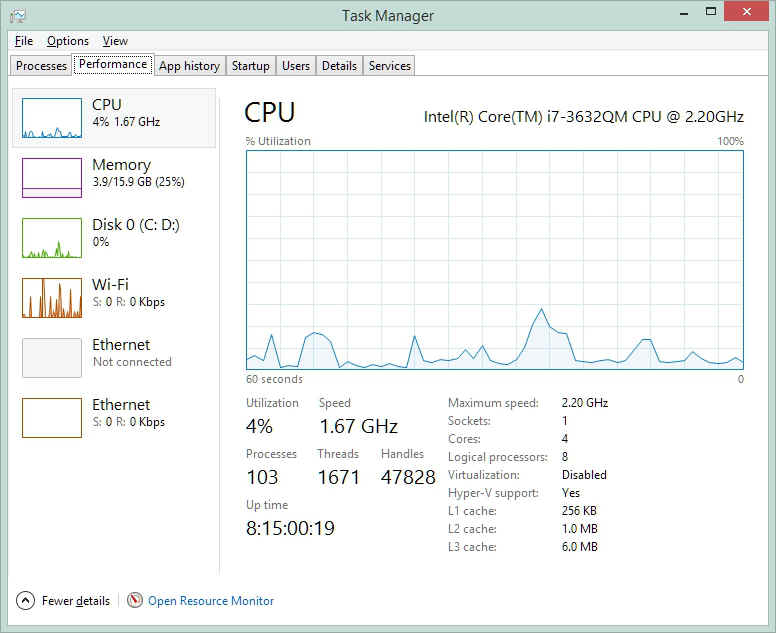 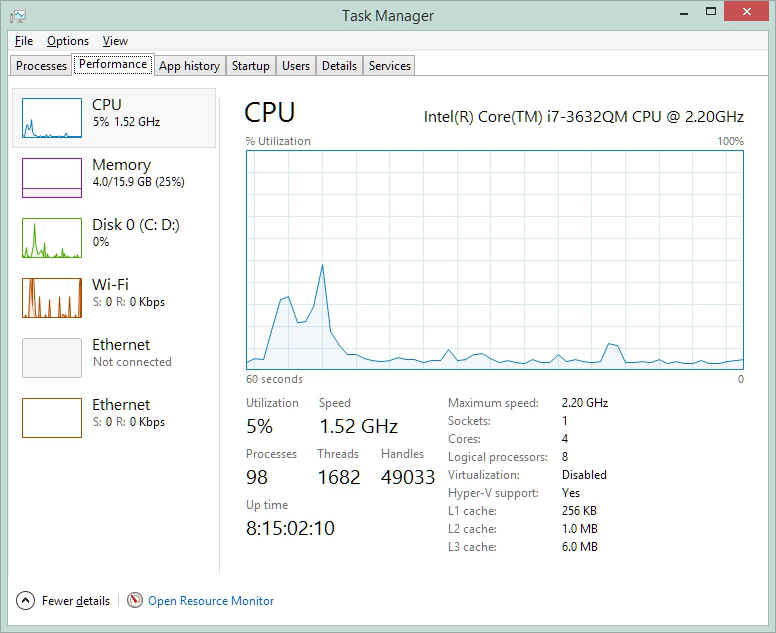 After starting the virtual computer running Windows XP at idle, we see this desktop of the window running WinXP.  The image here shows the 1024 x 768 screen resolution of my virtual machine with its 2 GB of RAM to run Win XP and its applications.   The VM has a 20 GB virtual hard drive as part of the file used by the Virtual Box software program. 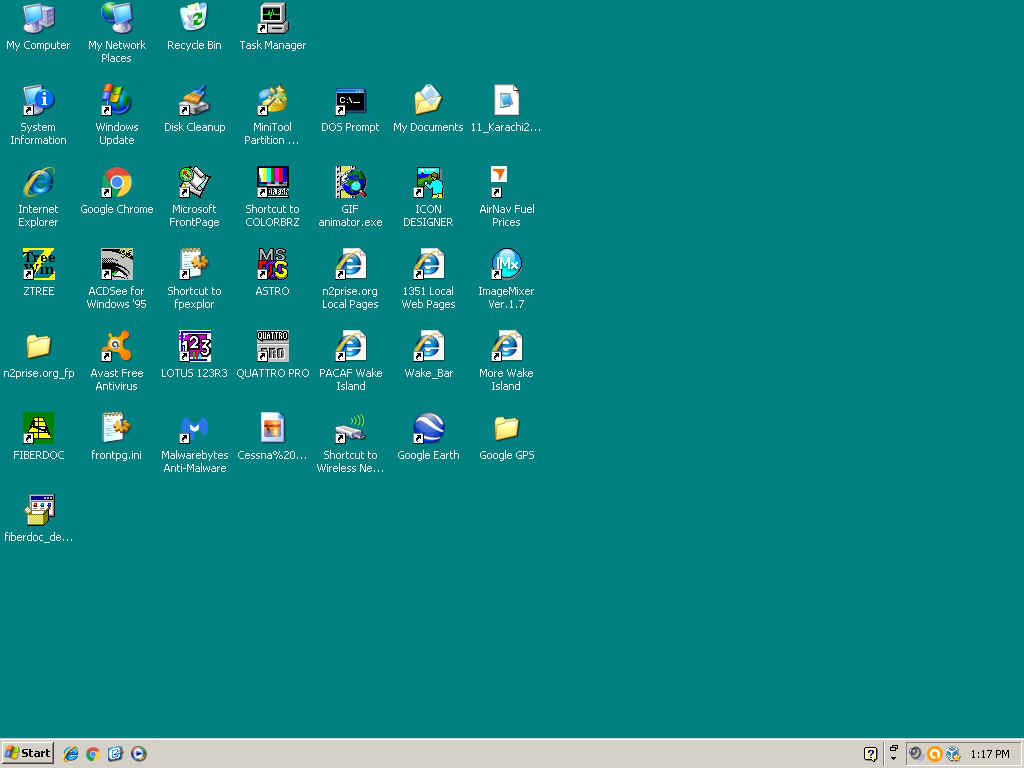 Task Manager image 5 shows the P400 operations with the Virtual Machine running.  The CPU is now running at 11% of its capacity, and the RAM in the P400 has 6.5 gigabytes of the 16 GB total committed to the applications. 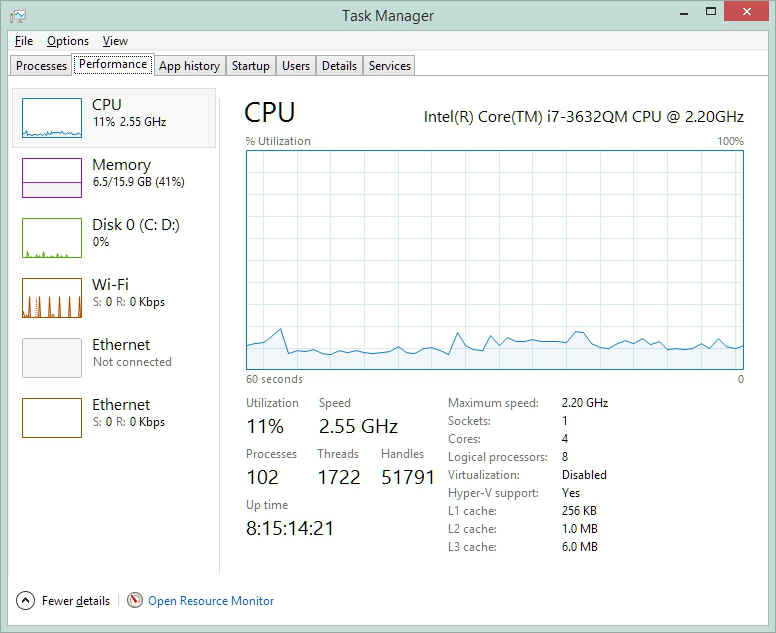 When I start Front Page 98 inside Win XP on the Virtual Machine, everything looks like it always has on my old IBM T23 from 2002.  I have already opened the Front Page Editor by double-clicking on my web page 401 file seen in this screen capture from WinXP.  The latest versions of the Virtual Box program allows a copy and paste from the virtual machine to applications in the host computer, my Lenovo P400. 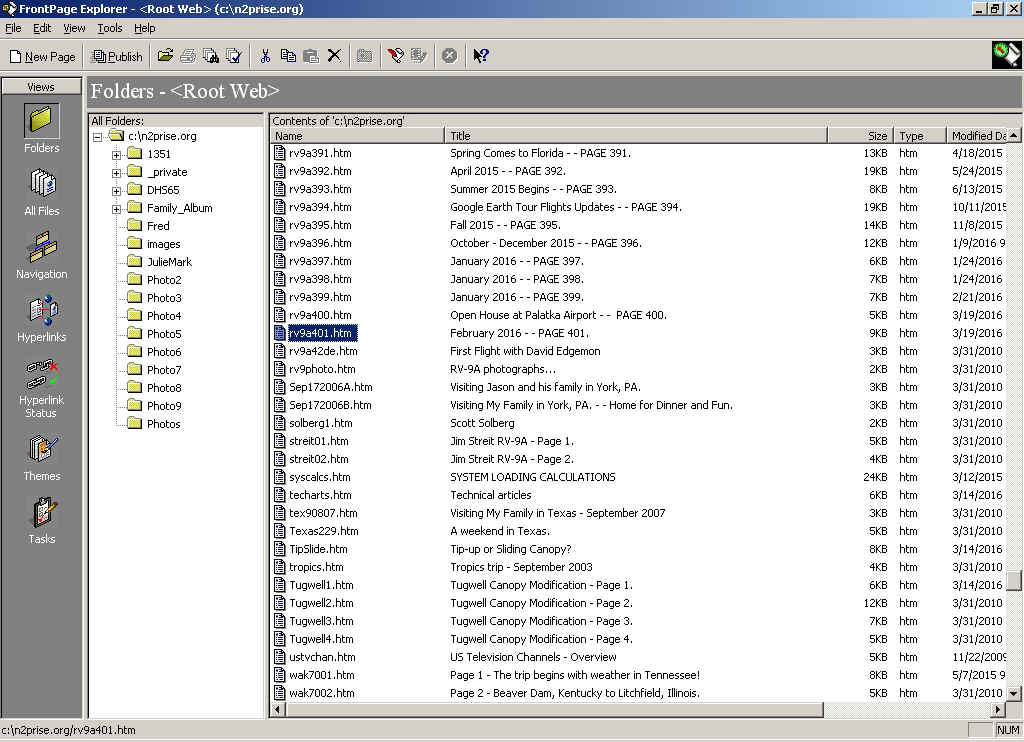 Task Manager image 6 shows the results of having FP 98 running on the virtual machine (VM).  The CPU clock speed is changing, and the processes and threads are changing as the many files are working in the background in BOTH computers. 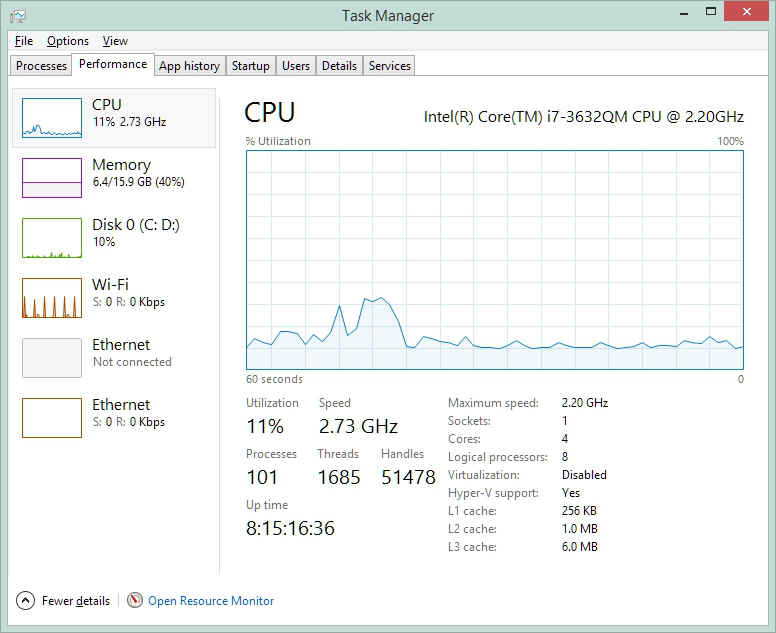 Here is the view of the Front Page 98 Editor as I am working on this web page.   Are you confused yet? Pay no attention to that man standing behind the curtain.   Sorry, wrong movie. 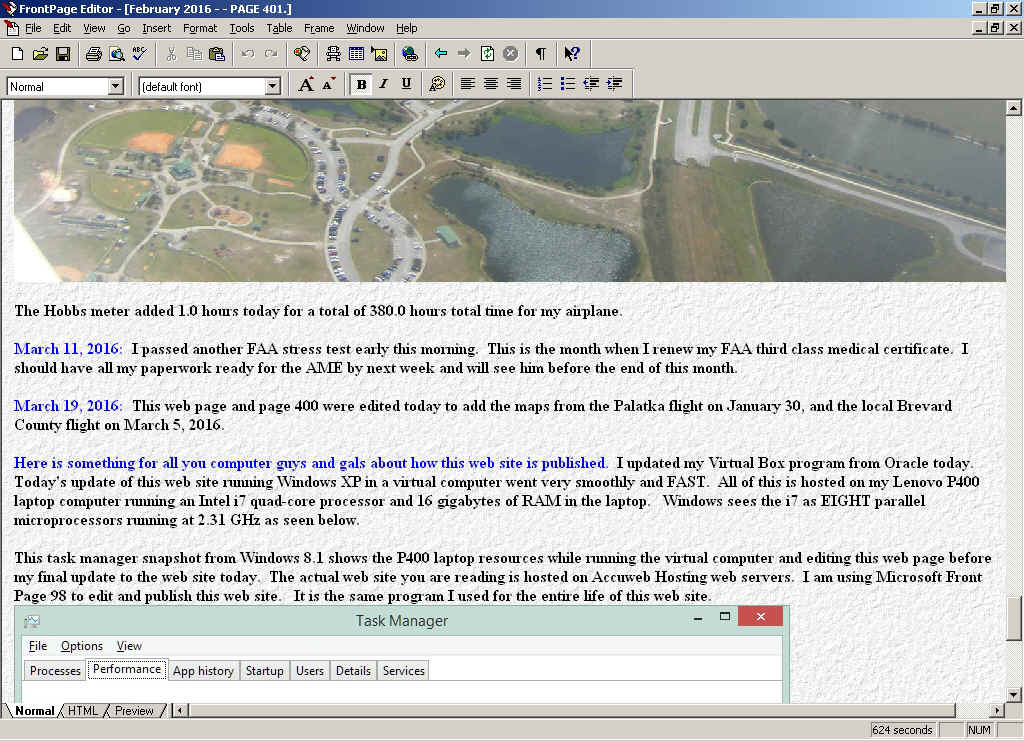 The final Task Manager image 7 shows all that stuff above running and the CPU is clocking at 2.8 GHz with 6.5 GB of RAM doing the work. 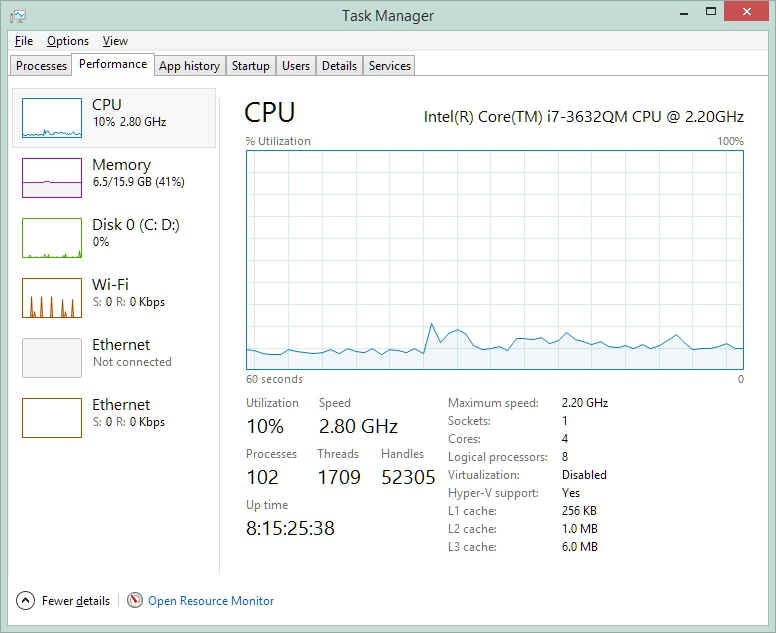 I published this page after returning from the airport.  The light rain came when I started this page, then came the heavy rain and lightning strike not too far away before I could finish my edits.  We did not lose power, but I did hear the air conditioning compressor surge protector make a noise outside my office window.  I just went outside with my umbrella to be sure the compressor was working as it should.   ALL is WELL.

Wendell called me yesterday after a long dry spell as we say in North Georgia.   The local rural electric power company, North Georgia Electric Membership Corporation (NGEMC) is planning to put in a new power sub-station not too far from Wendell's house and air strip.  The proposed power line route would cut across the runway and be a real problem.  About 30 of his nearby neighbors are working to put the site some where more commercial near US 27 a few miles to the west.

The real reason he called was to ask about getting a replacement for one of his four cylinder head temperature probes.  He ordered one from Aircraft Spruce & Specialty that did not fit.  I reminded him to contact Grand Rapids Technology, the company that provided the engine monitor and all the original temperature probes.

Wendell also mentioned the guy who bought the Cessna 182 back in 2007.   You can see Ken and Wendell on this web page when the airplane was handed over in Anchorage, Alaska.  http://www.n2prise.org/wak7042.htm   Ken has moved to Utah and got a job with the FAA.  The Cessna 182 may be sold soon.  Airplanes are used a lot in Alaska, but not so much down in the lower 48 states.

I also mentioned the possibility of me paying Wendell a short visit on my way to Ohio in June.  The dedication of the Jerrie Mock exhibit at the Works Museum will be Saturday, June 18, 2016 in Newark, Ohio.  My wife suggested I go to the US Air Force Museum in Dayton while on that road trip.  I am thinking of taking the airplane and rent a car in a couple of places as needed.  That will be subject to the weather forecasts in June.

I also received a call from Wendy Hollinger on Friday, March 11 asking some questions about getting the Jerrie Mock Google Earth tour to work properly.  She had downloaded the wrong file and I sent her the correct one via email.  I had to remind her of our discussion last year about making a video with some highlights of the "Around the World" tour to play in the exhibit area.  The takeoff from Columbus, Ohio at the start of the trip is a must see event with all the 3-D imagery available on Google Earth.

As you can see, this has been a busy week for me without flying my airplane.