January 16, 2016:  Once again into the air!   The weather was good at Rockledge Airport as I headed out for lunch at the restaurant on the Ocala Airport.  Billy and his business partner headed up to the Deland Airport to inspect another Aventura II light sport amphibian before its first flight. 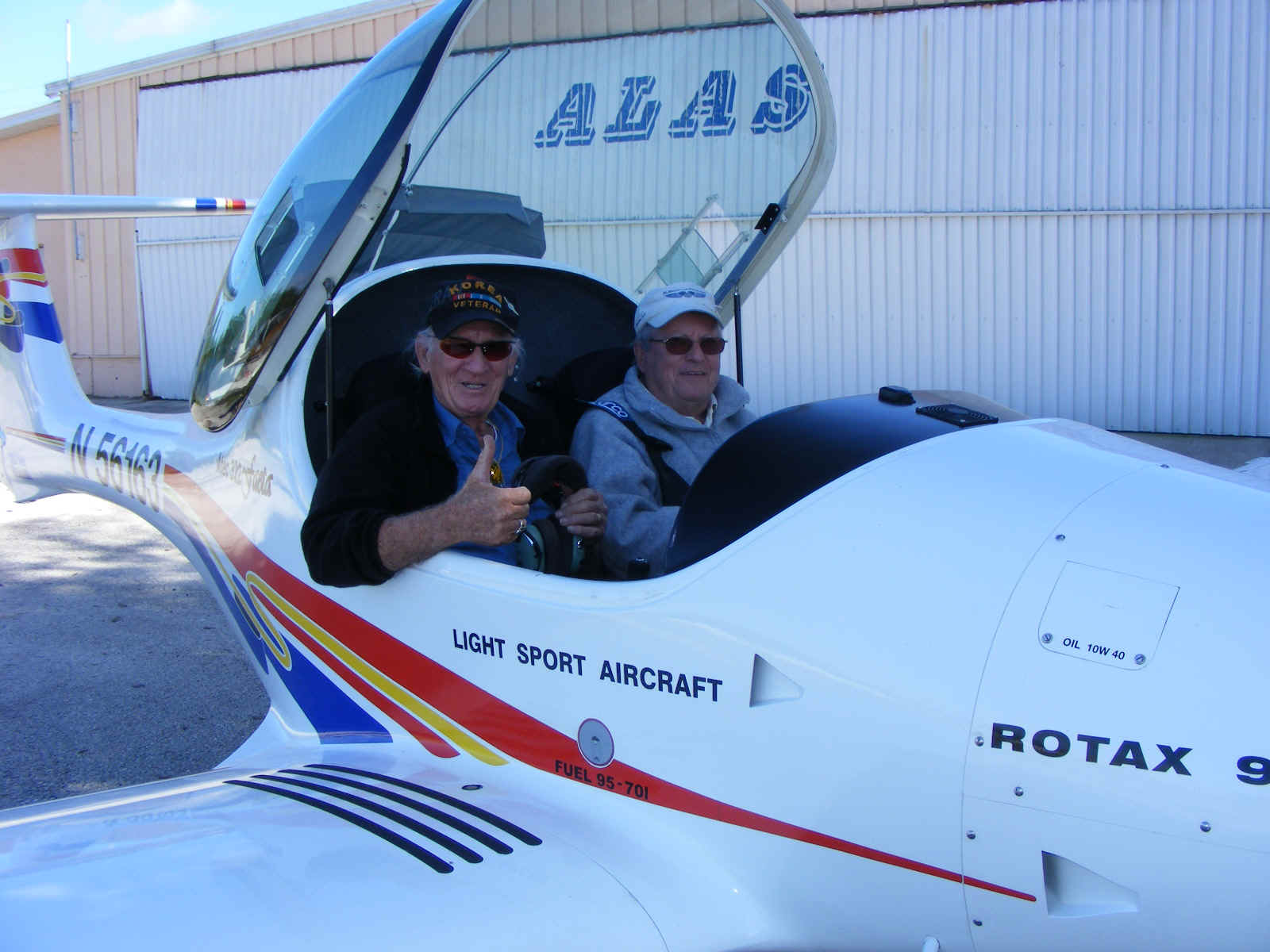 I checked with JAX center to get the status of the the R-2910 bombing and gunnery range in the Ocala National Forest.  On this Saturday it was "COLD" meaning not in use by military aircraft.  I was cleared to fly across the restricted area VFR.  I was on top of the mid-day broken cloud deck and took this photo looking down from 10,500 MSL at the center of the bombing range.  The winds aloft were about 50 MPH and I was heading straight into it.  The two roads down there are Florida routes 19 and 40 crossing in the forest. 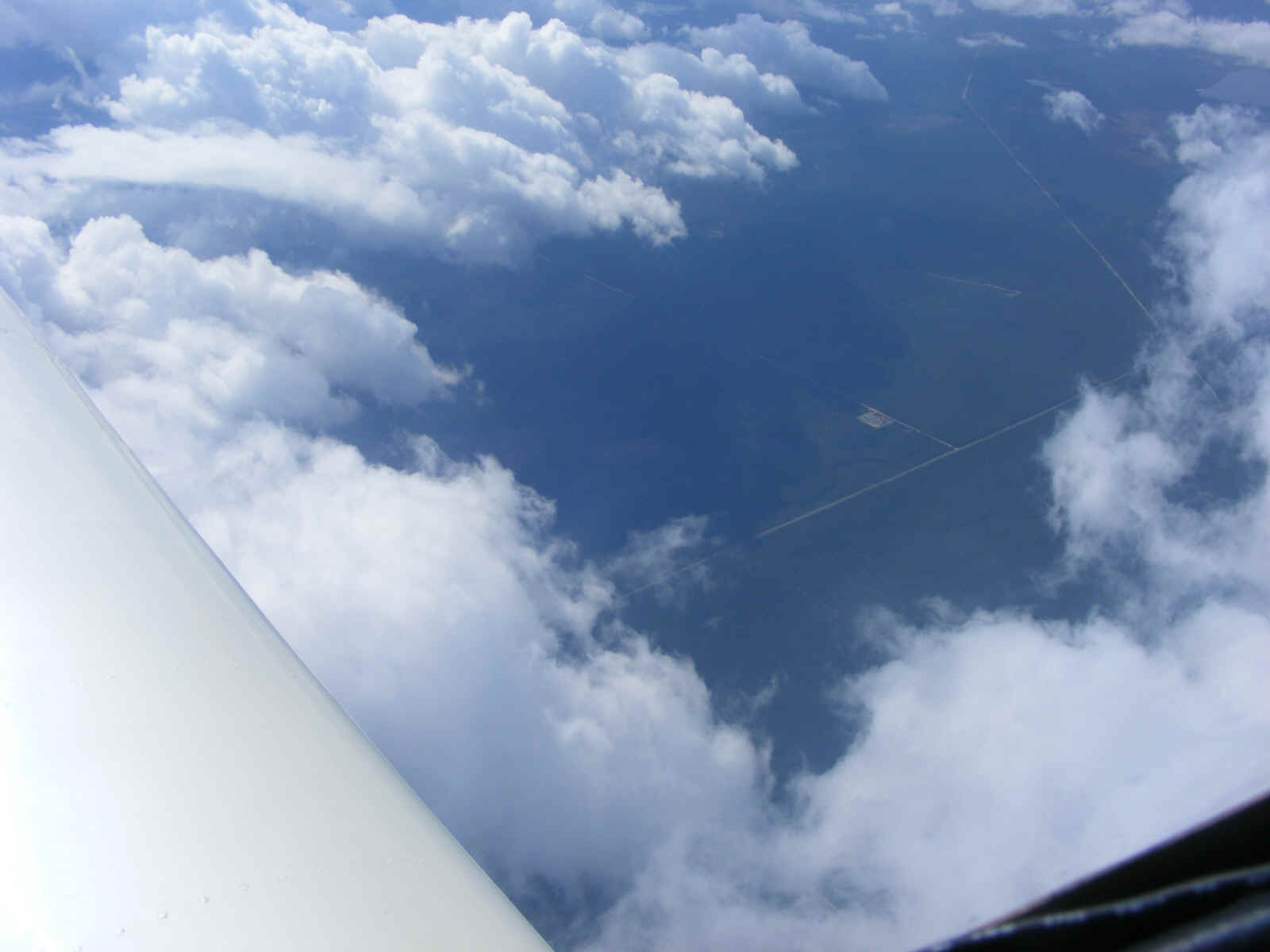 This Google Earth view has my GPS ground track as the BLUE LINE, and the RED LINE points to the area visible through the broken cloud layer in the photo above. 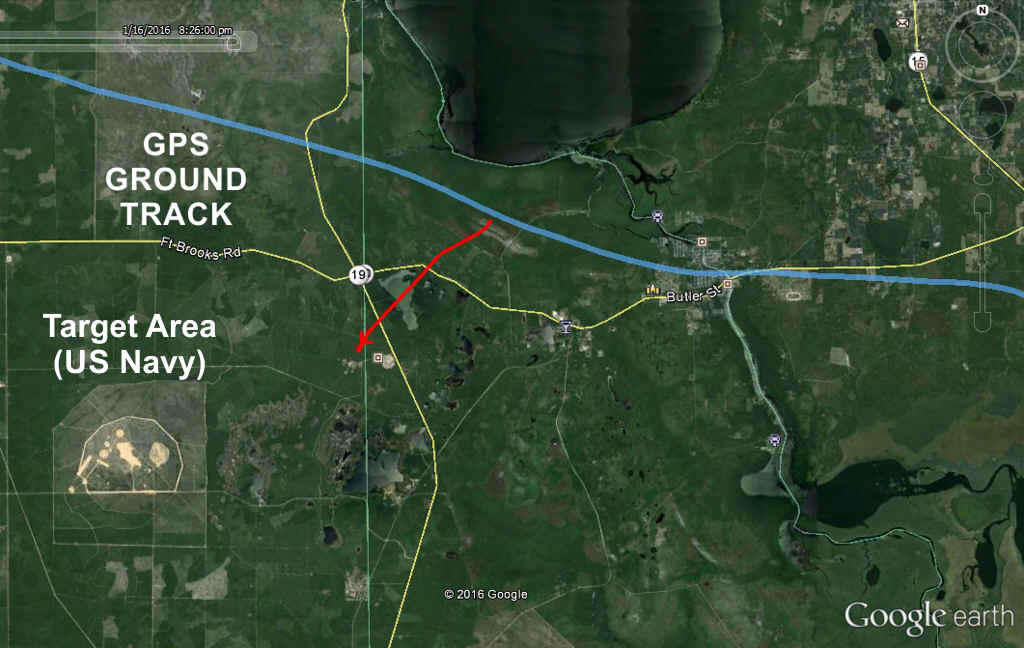 Here is the view looking northwest toward Williston Airport (X60) about 40 miles ahead.  I tuned in the AWOS-3 on 118.425 to learn I would not be going there today.   The automated weather system message ended with the words "thunder storm".  I diverted to the Ocala airport for lunch a bit earlier than I planned.   Back in the 1980's I took a ground school class from a flight instructor who was based at the Williston Airport.  I wanted to fly in there just to see the place where he provided flight training back then.  My satellite job kept me busy traveling in the those days.  I did not get a chance to be a student pilot until October 1991.  The air up here was SMOOTH, but it was a headwind and lunch was about 20 miles away at the Ocala Airport (KOCF).  A VFR descent was my next maneuver staying well clear of the broken clouds down to 3,000 MSL. 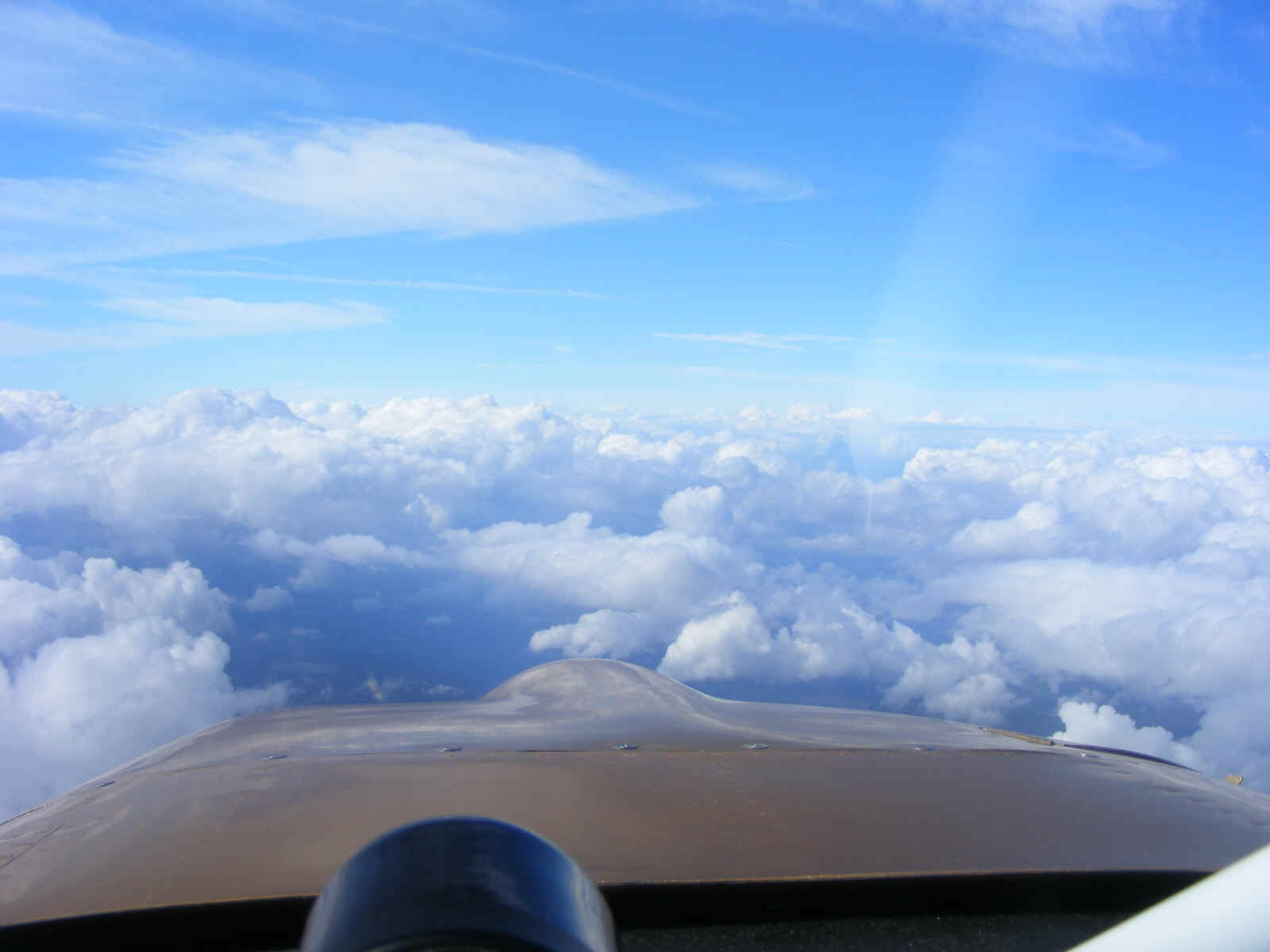 I was cleared to land on runway 18 with the wind from 240 gusting to 20 knots.  It was a good landing and I stopped about 100 feet past the exit to the ramp.  I made a quick U-turn on the runway for a short trip to the ramp parking area in the front row.  Lunch was good and reasonably priced for an airport restaurant.  The big draw in this area is race horse breeding and training.  The business jets and turboprops are part of that scene.  This is the view looking west just outside the FBO office adjacent to the restaurant dining room. The VOR is on the field and visible against the trees to right of the jet on the ramp in the background. 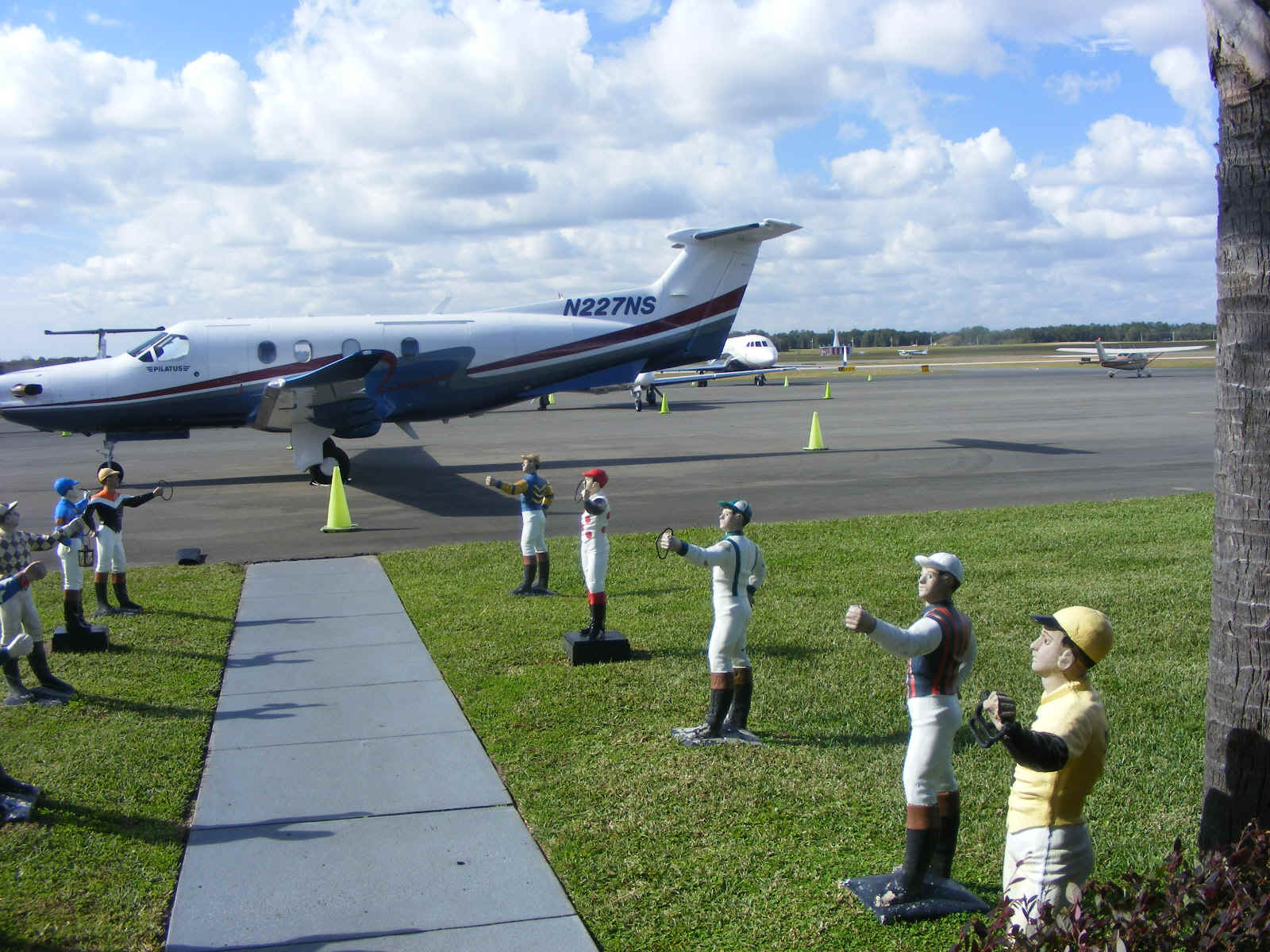 The Gulfstream pulled out after my ramp departure.  I asked the tower for the short runway 26 (3,000 feet long) to head into the wind for an easy takeoff.  The tower cleared me for a right turn to stay north of the airport and the departing traffic from runway 18. 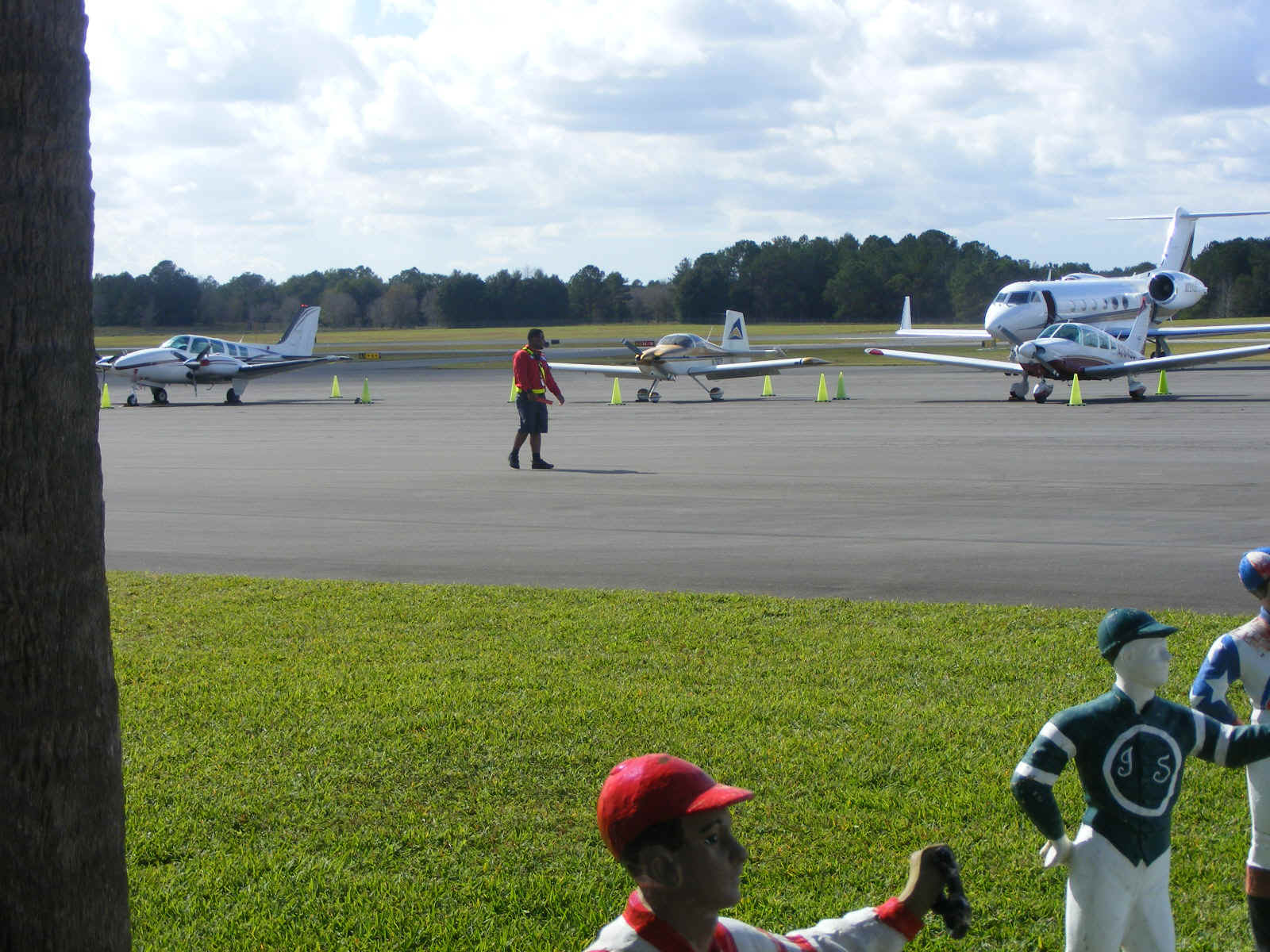 The view from northeast of the Ocala Airport shows the short runway I used partially obscured by my right wing tip.  The VOR is the white circle in the grass even with the north end of runway 18.  The Gulfstream jet was lined up and cleared for takeoff from runway 18 as I took this photo. 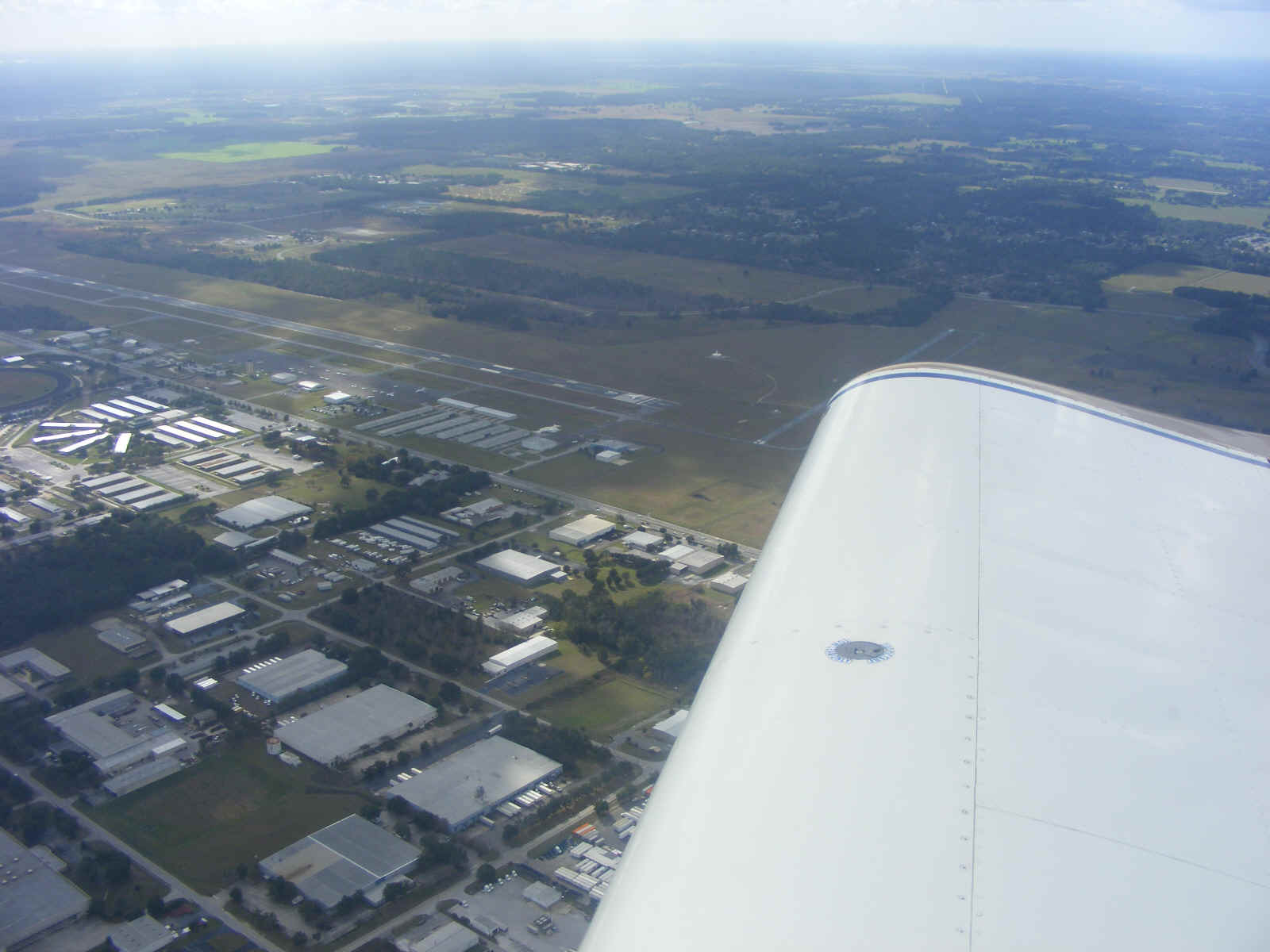 Here is my GPS ground track arriving and departing the Ocala Airport as seen via Google Earth.  The RED LINE below shows the "look angle" of the photo above. 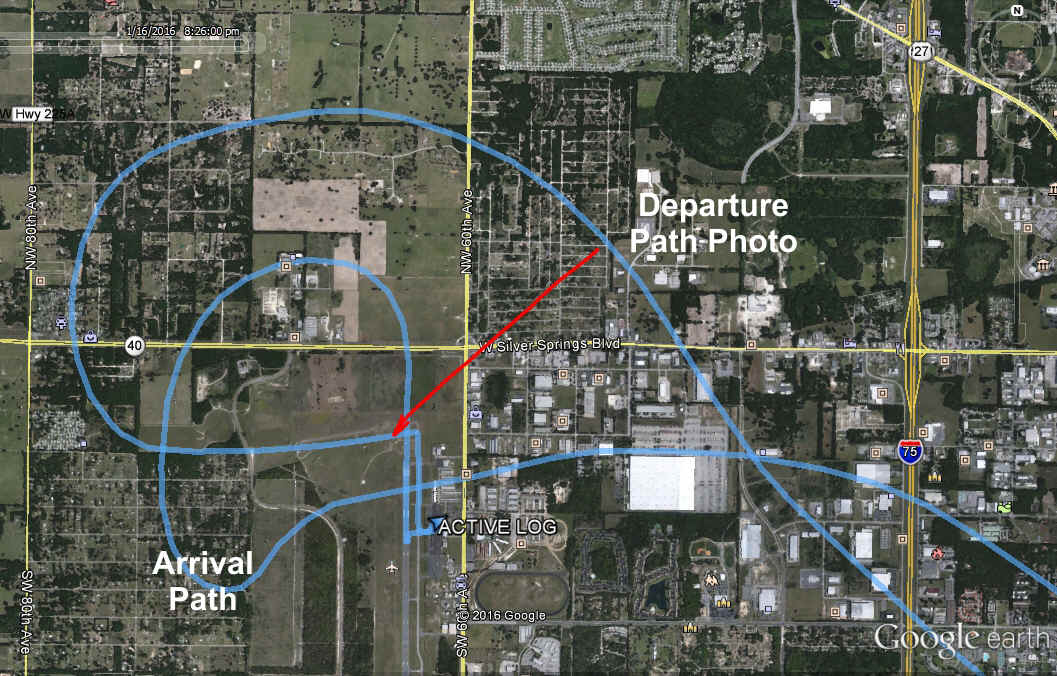 This is an area north of Belleview and southeast of Ocala where I lived in the 1980's.   There is new road construction near Leeward Air Ranch connecting to county road 35 that runs north and south at the right edge of the photo.  The new road is bypassing the town of Belleview on the northeast side. 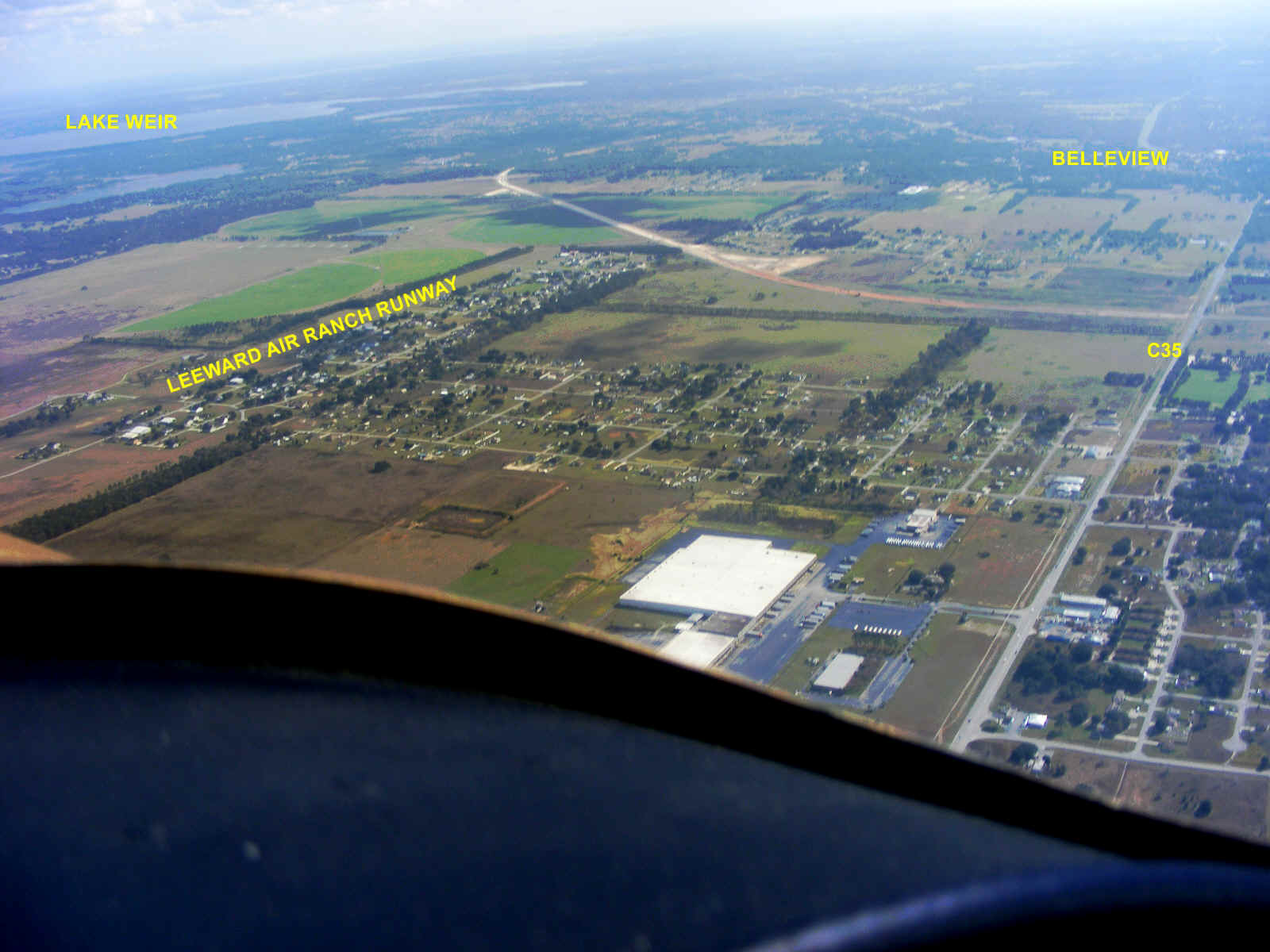 This leisurely ride toward the Umatilla Airport for fuel took me across my old work location in Silver Springs Shores.  I have taken photos of that area in earlier web pages from a couple of years ago.  This is the view heading southeast toward Umatilla.  The lakes in this part of Central Florida are bigger near the city of Leesburg in Lake County.  You can see the large clouds from earlier in the day have dissipated and are much lower on top. 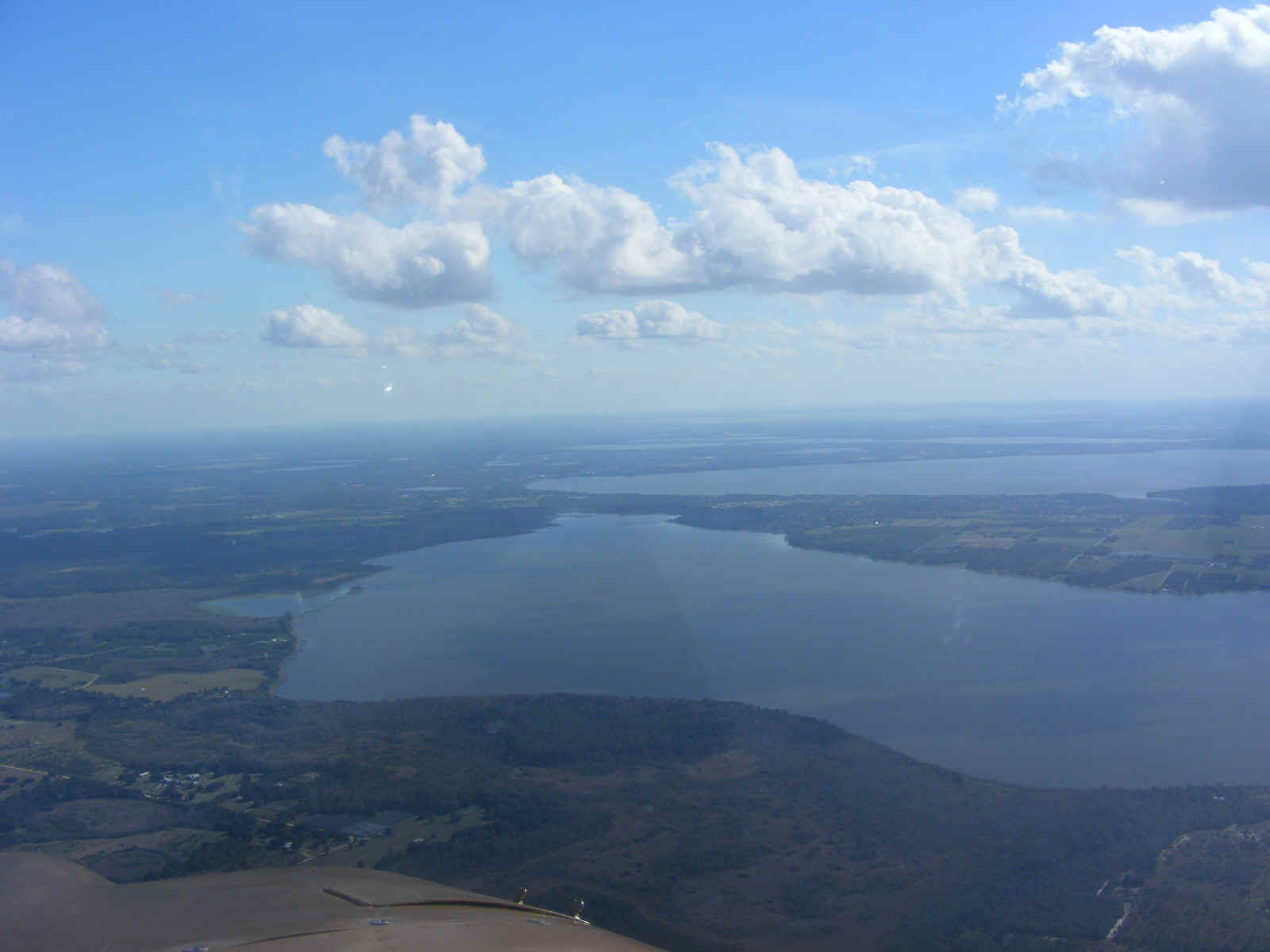 The size of the lakes get smaller on the approach to the Umatilla Airport. 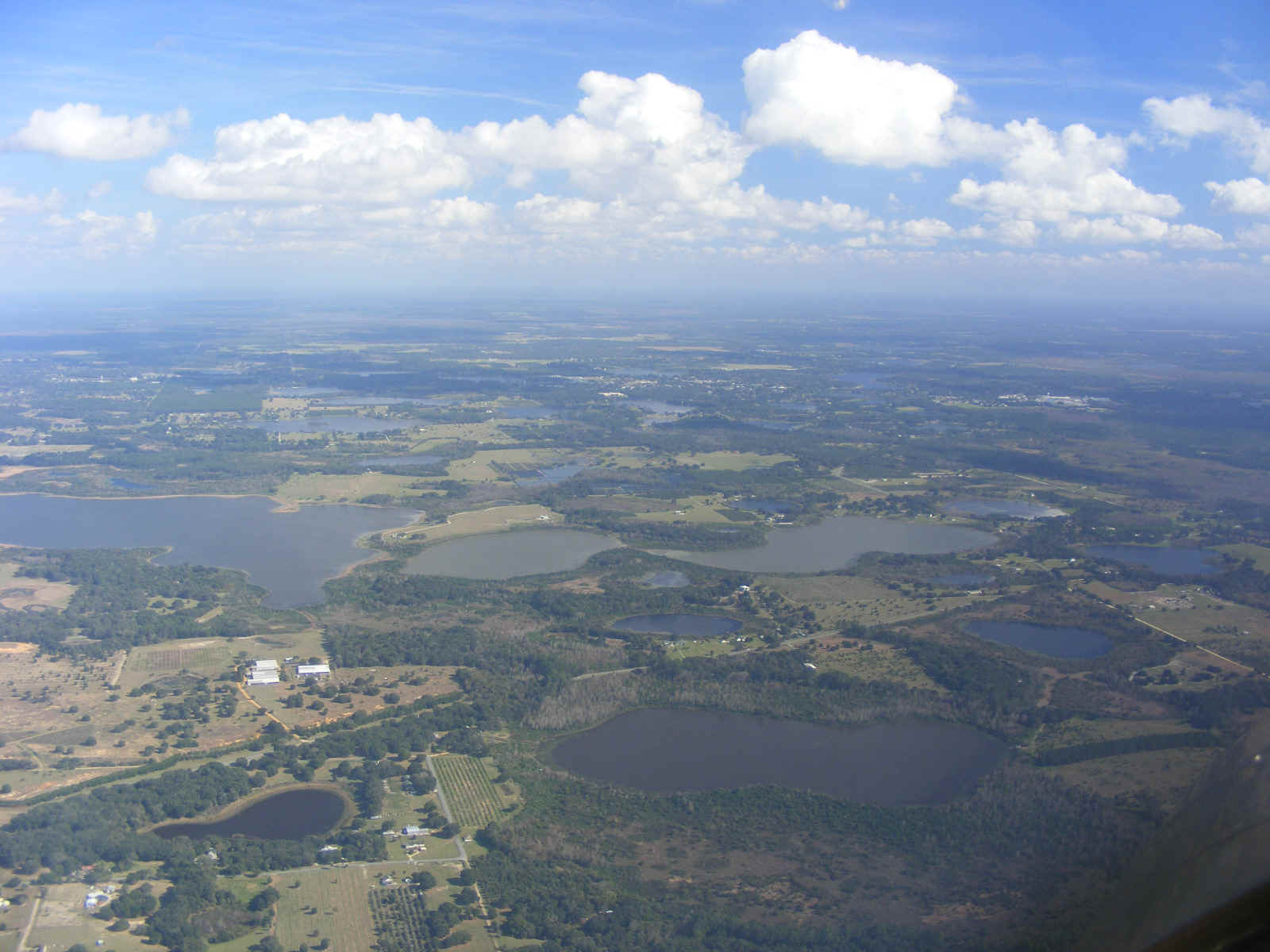 The Umatilla fuel price is on the sign near the fuel pump ramp.  This is a price I paid back in 2005 near Chattanooga and in Texas. 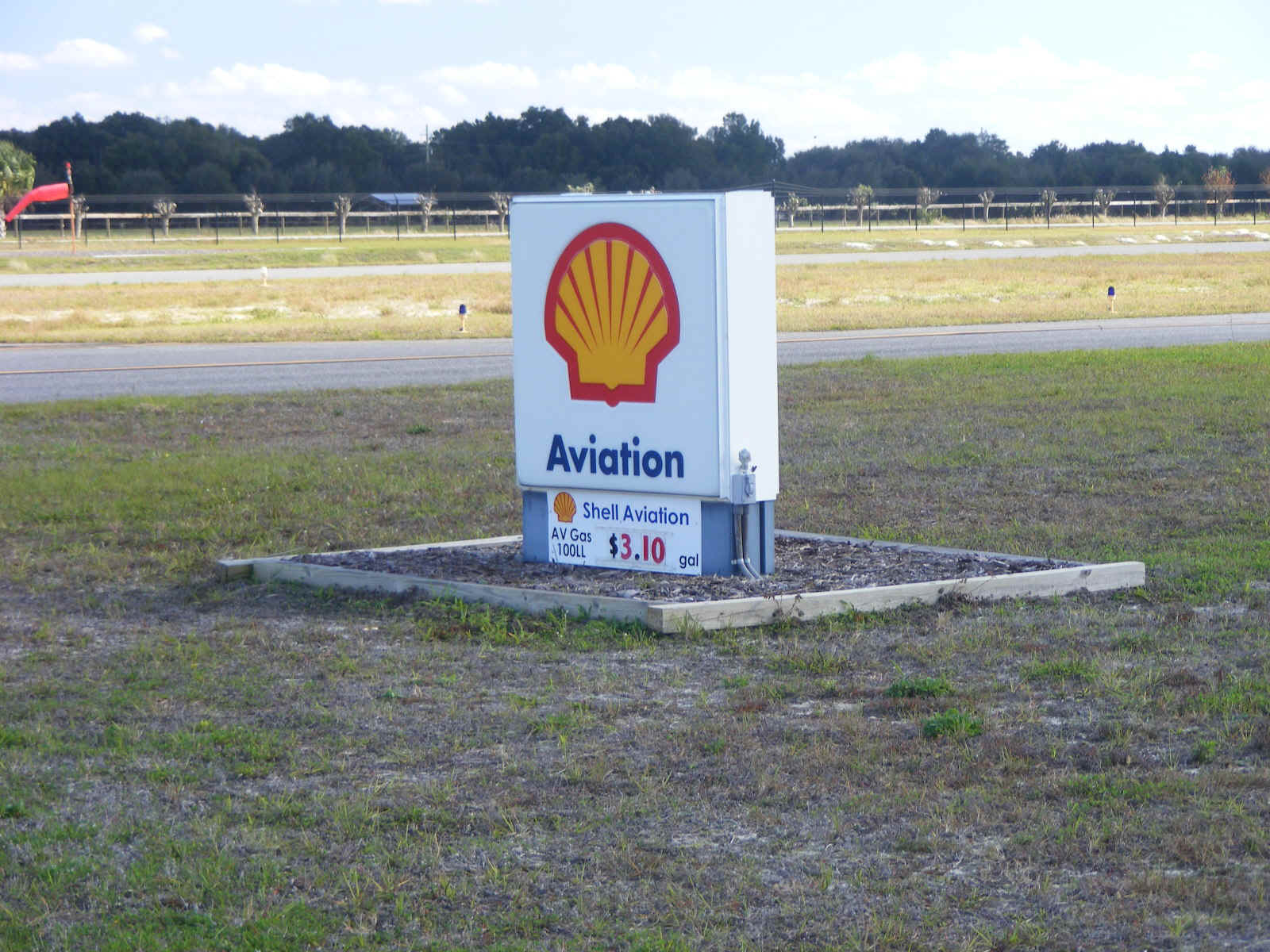 There is a photo similar to this one from last year. 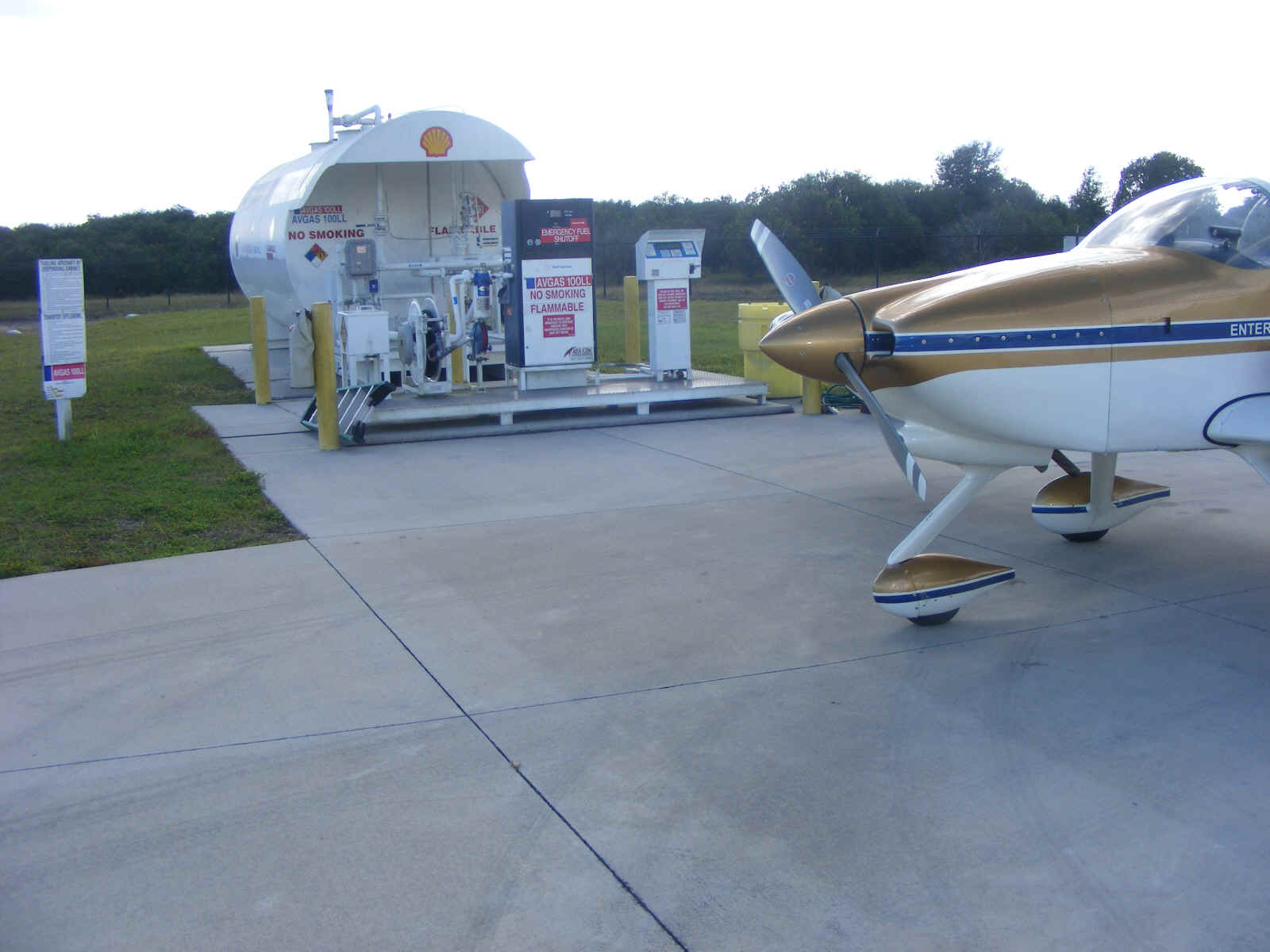 I had seen this amphibian about 20 miles out from Umatilla on my way over here. 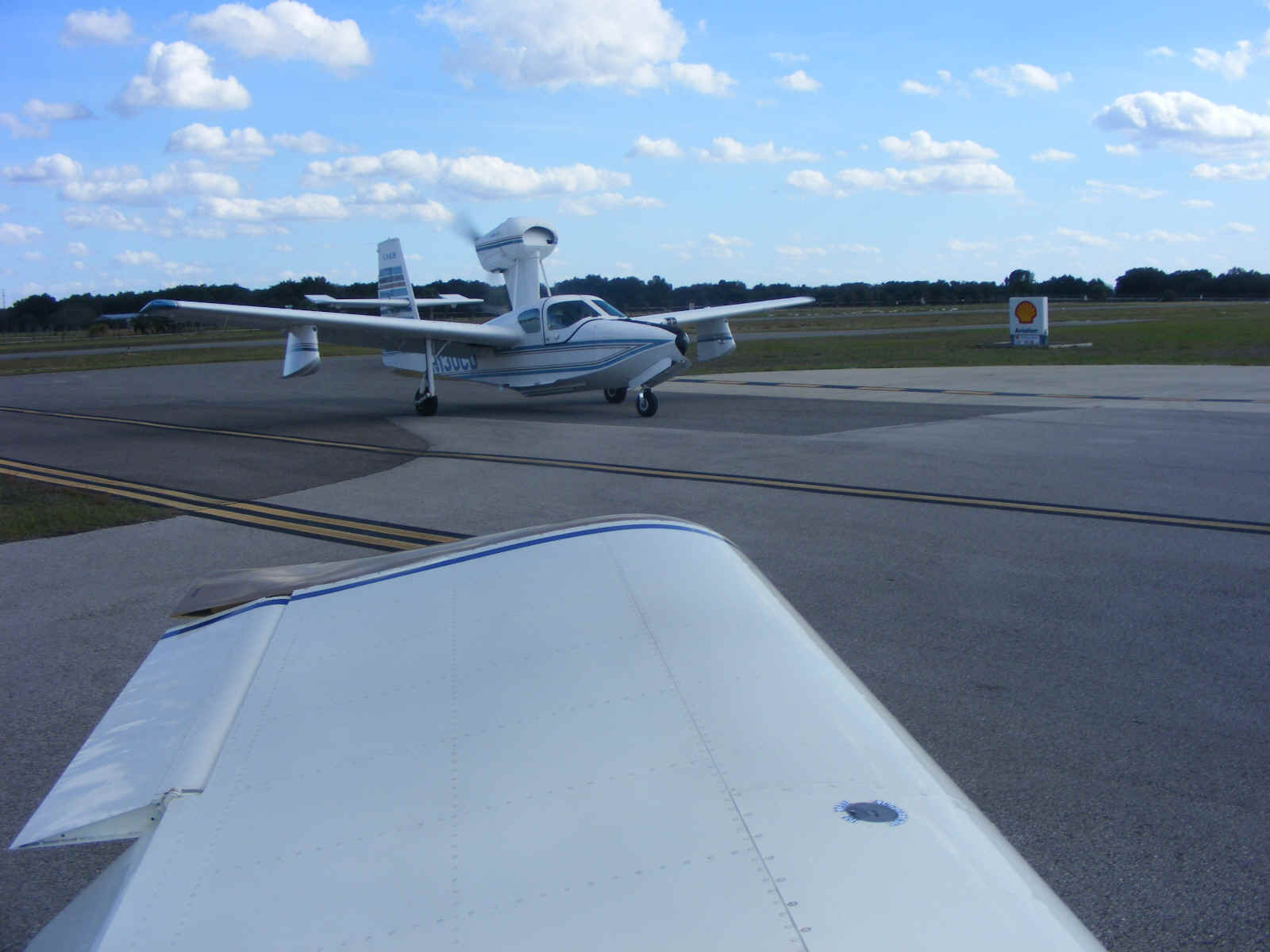 I left enough room for the airplane to pass by when I pulled over to the north side of the fuel ramp.  The Bonanza pulled in while I was fueling.   When the amphibian was parked on the ramp to my right side, I headed out to runway 19 for my departure for home. 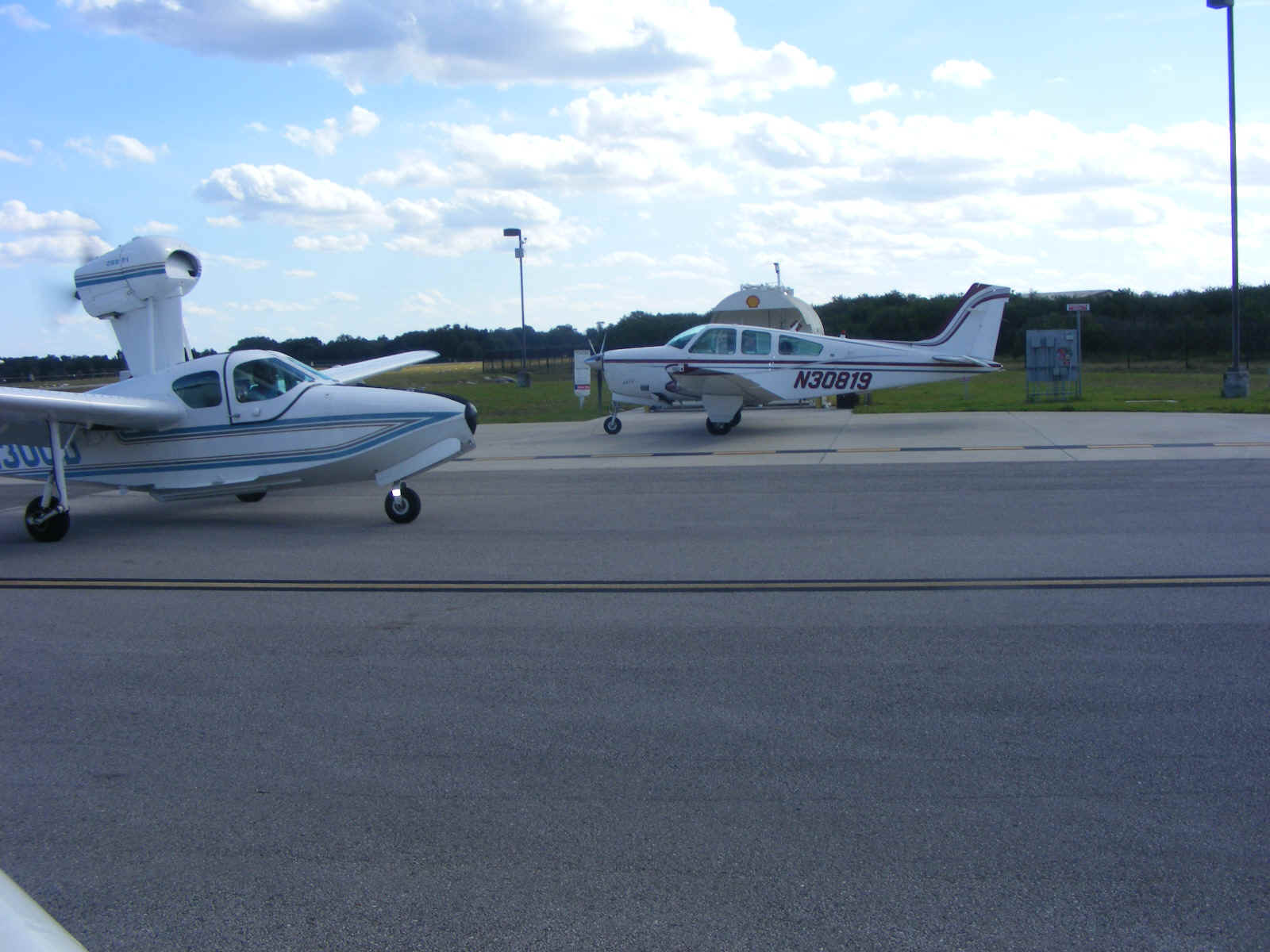