January 16, 2016:  A few miles East of Umatilla, this TV transmitter tower near Orange City comes into view on the left side of the airplane.  The cloud shadows below give you an idea of how much open space is between the clouds. 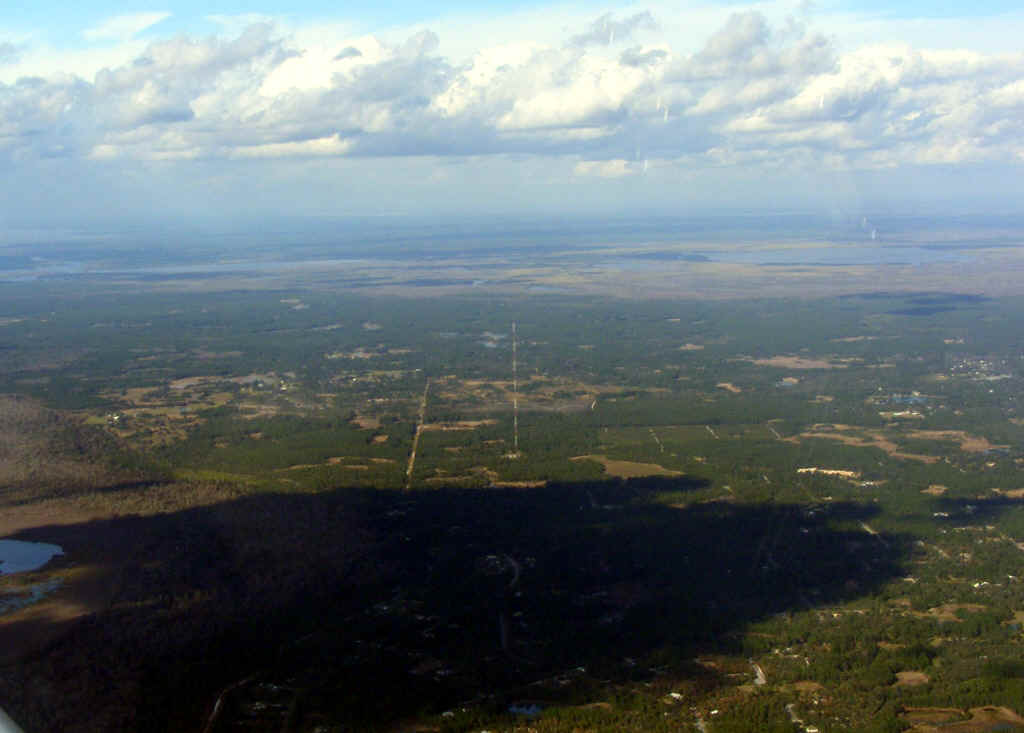 This view is looking southeast toward Sanford and the lake north of the city, which is part of the Saint Johns River.  The river runs north toward Mayport at the Atlantic Ocean past Jacksonville, and Palatka, from its headwaters near Melbourne as one of the few rivers in the USA that flows north. 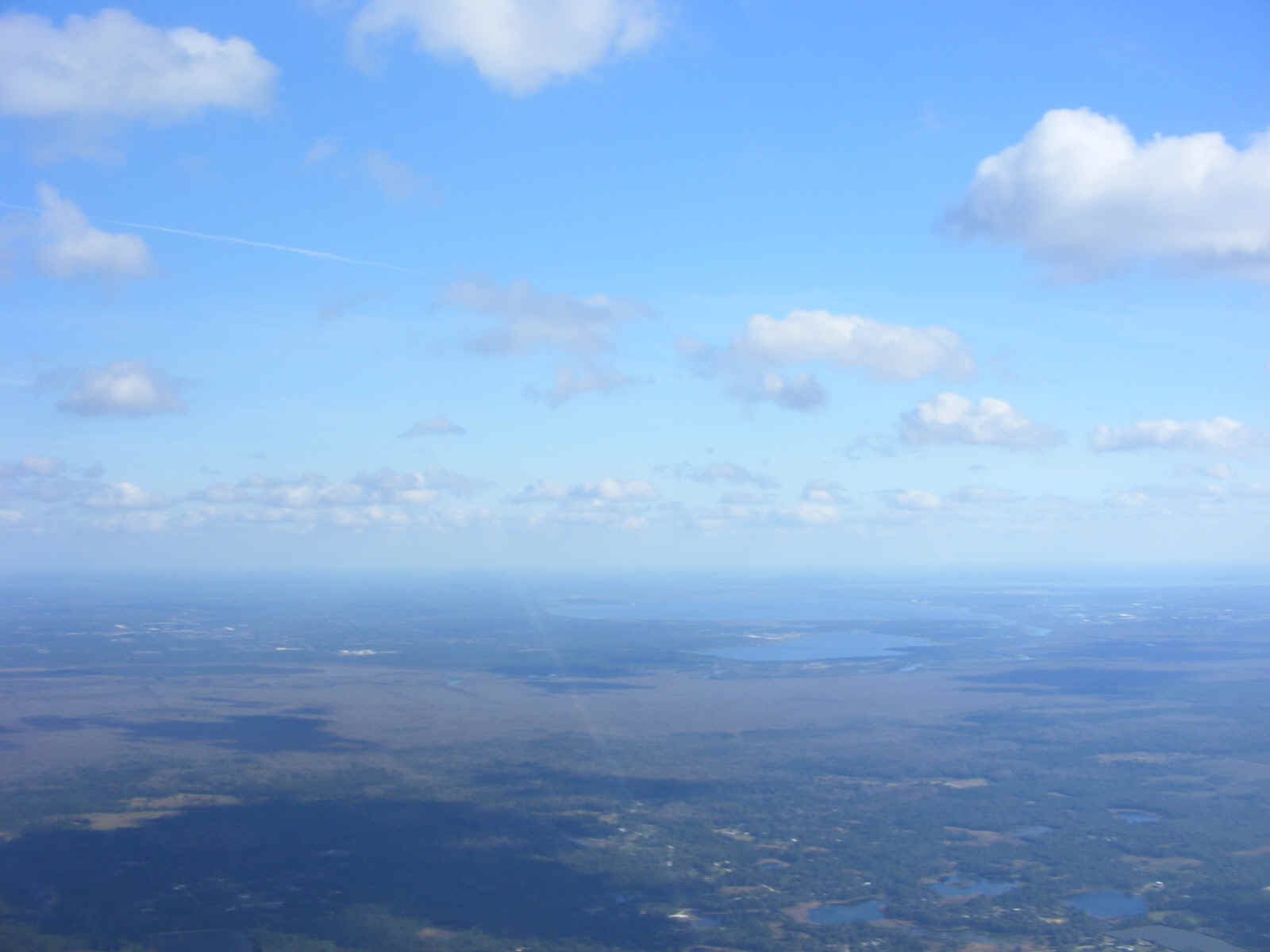 I came to the coast line to see the clouds were dissipating over the ocean.   Interstate 95 is the western limit of the housing areas for the small towns on the mainland near US 1. 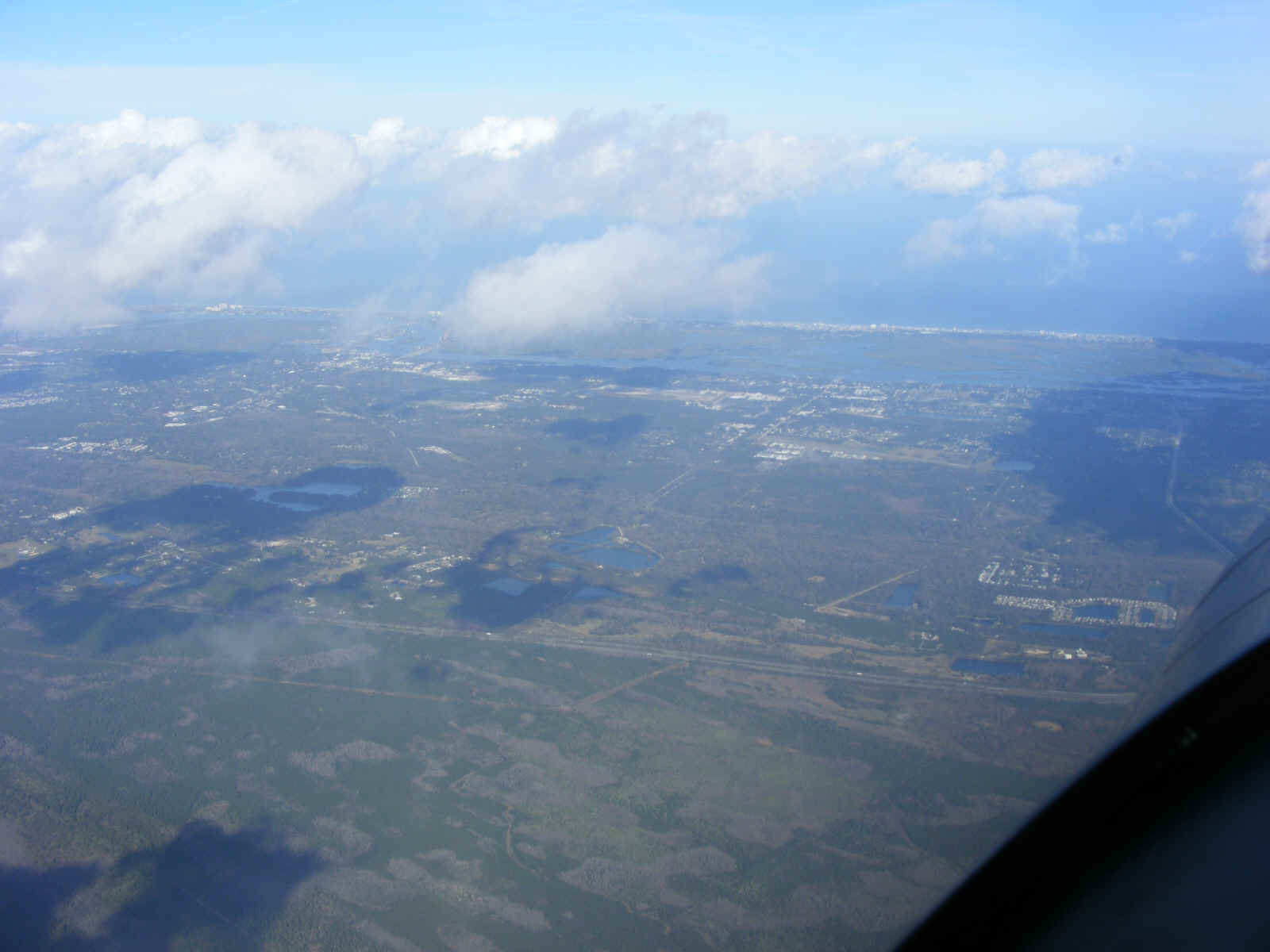 The shape of the towns become more visible as I approach I-95 seen near the bottom of this photo. 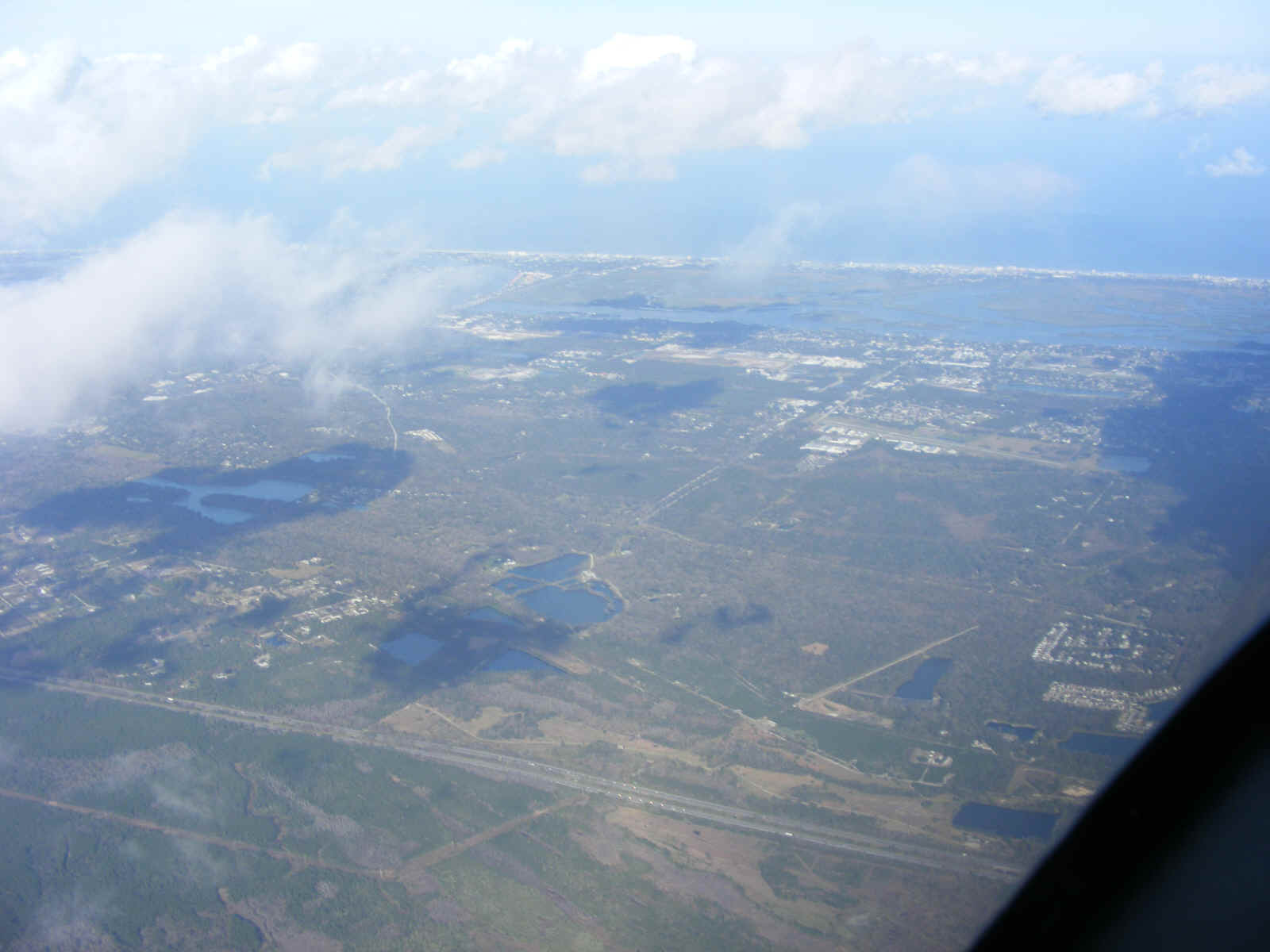 I crossed US 1 south of the town of Edgewater, Florida.  The numerous green islands below are part of the Canaveral National Seashore area that begins about one mile south of the homes on the barrier island.  The US National Park Service has an office there.  The park area extends about 25 miles from this location down the beach to the Kennedy Space Center on Merritt Island.  The space center is several miles east from the city of Titusville, Florida which is on the mainland with US 1 running through the town. 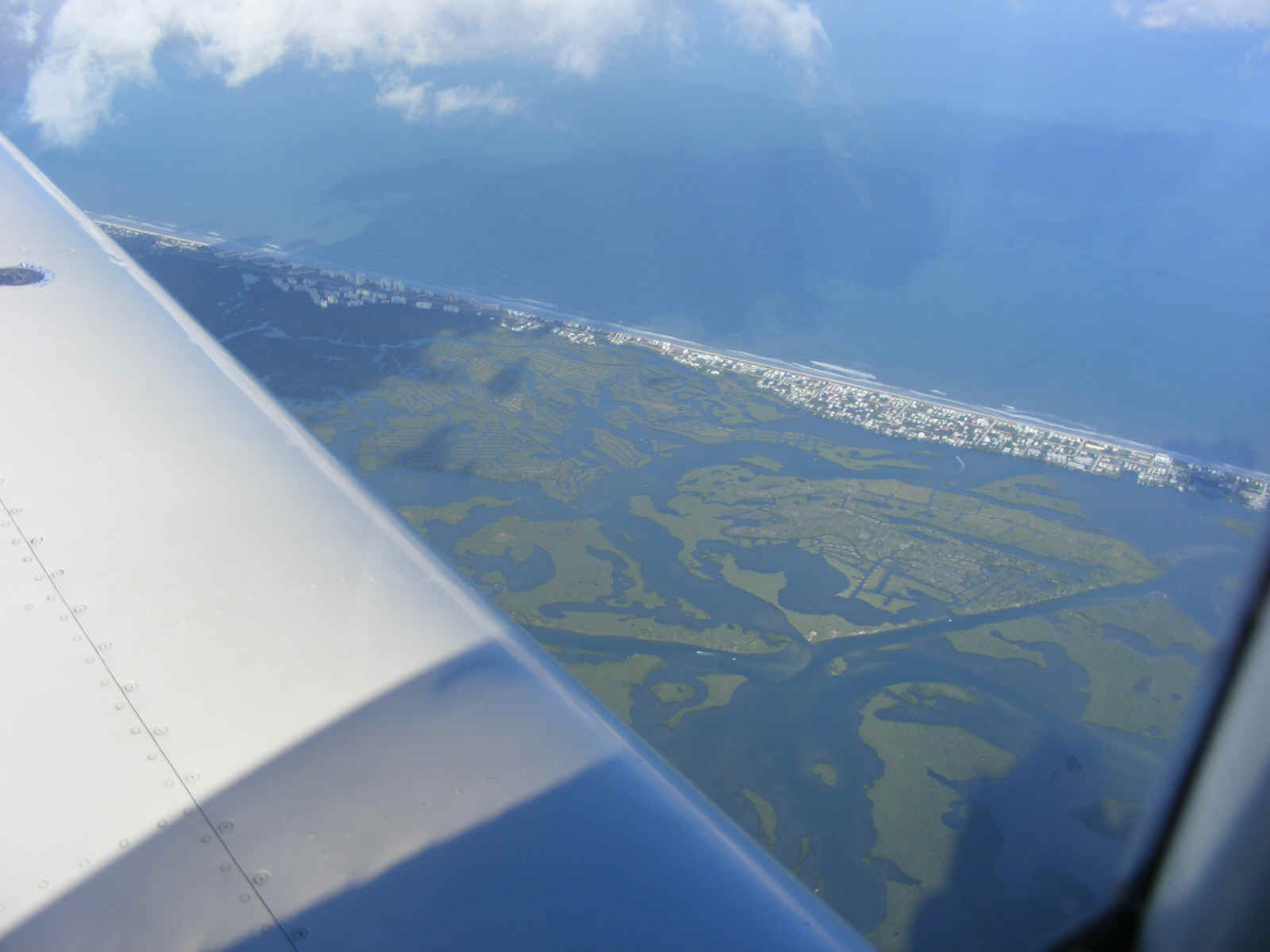 I turned south along the mainland adjacent to the Halifax River on my left with US 1 now on the right side of the airplane.  I got down just below the cloud layer for the remainder of my ride back to the Rockledge Airport.  The Canaveral National Seashore is barely visible as the barrier island at the left edge of the photo.  That area between the barrier islands and the strip of the mainland is the Halifax River.   Florida state route 3 runs down that thin land directly ahead which is also a wildlife reserve.  The four-lane highway at the bottom right corner of the photo is US 1 heading south to follow the mainland west of the Indian River lagoon.  Florida route 3 connects at the corner of the turn of US 1. Route 3 runs the full length of Merritt Island which officially begins at the draw bridge across the cut for Intracoastal Waterway. The Indian River Lagoon is the body of water at the right side of the photo. 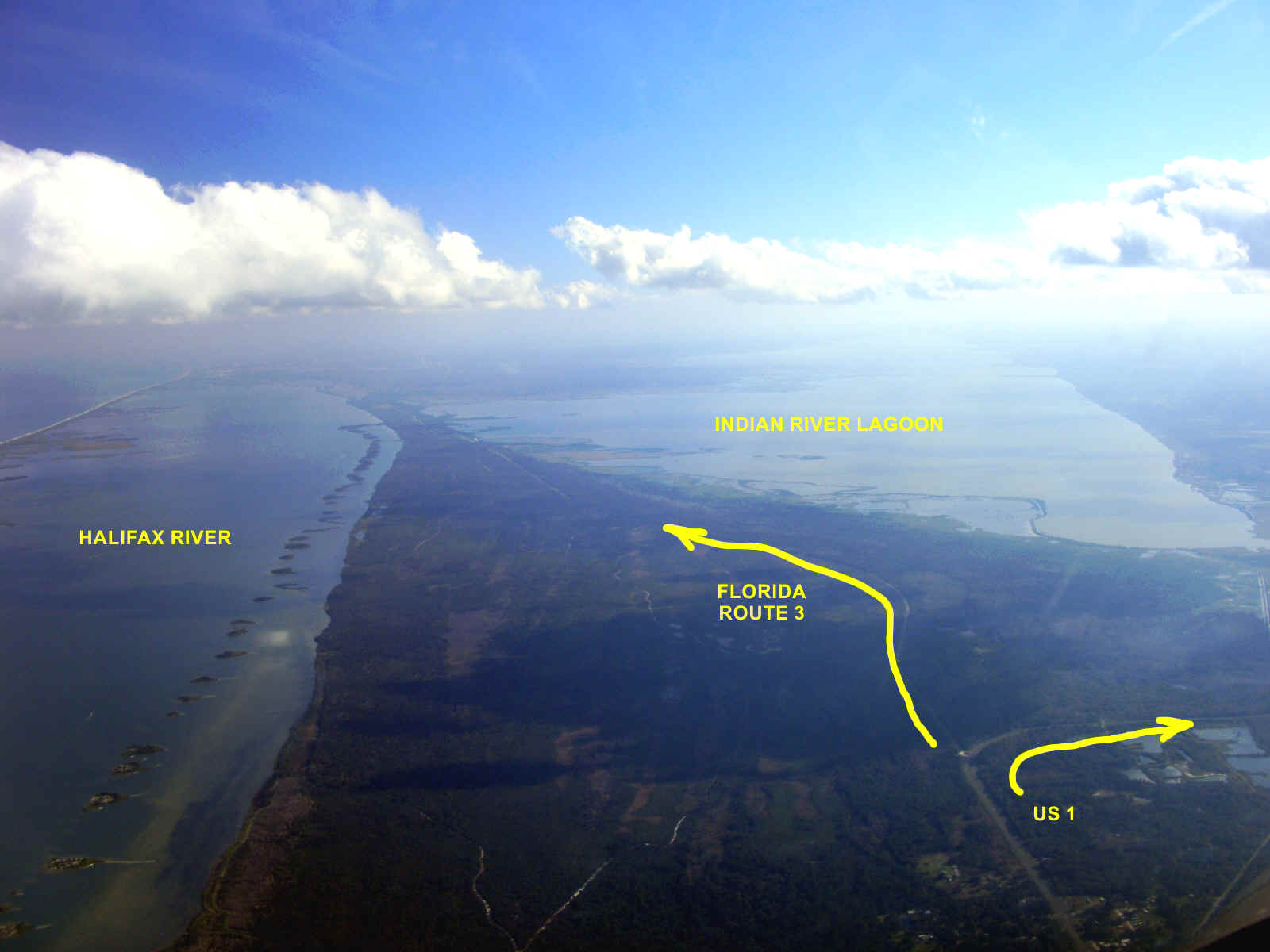 The intracoastal waterway runs the length of the Indian River Lagoon.  A cut in the strip of land at the left edge of this photo has a drawbridge for route 3 that allows boats to use the waterway.  The land gets wider and is known as Merritt Island from the draw bridge to the southern tip of the island where the Banana River joins the Indian River. 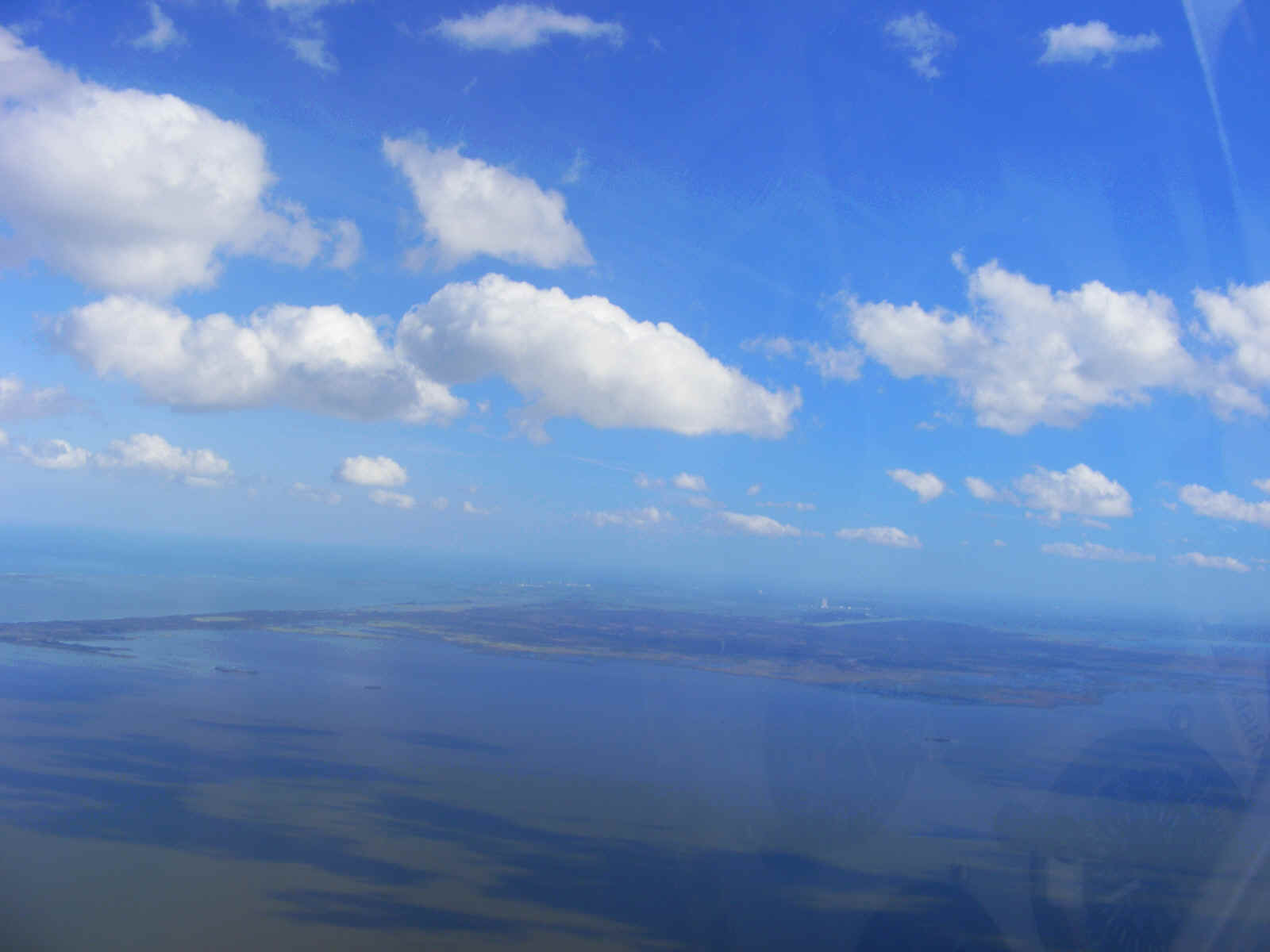 As I get closer to Merritt Island, the 15,000-foot length of the shuttle landing strip and the vertical assembly building (VAB) come into view. 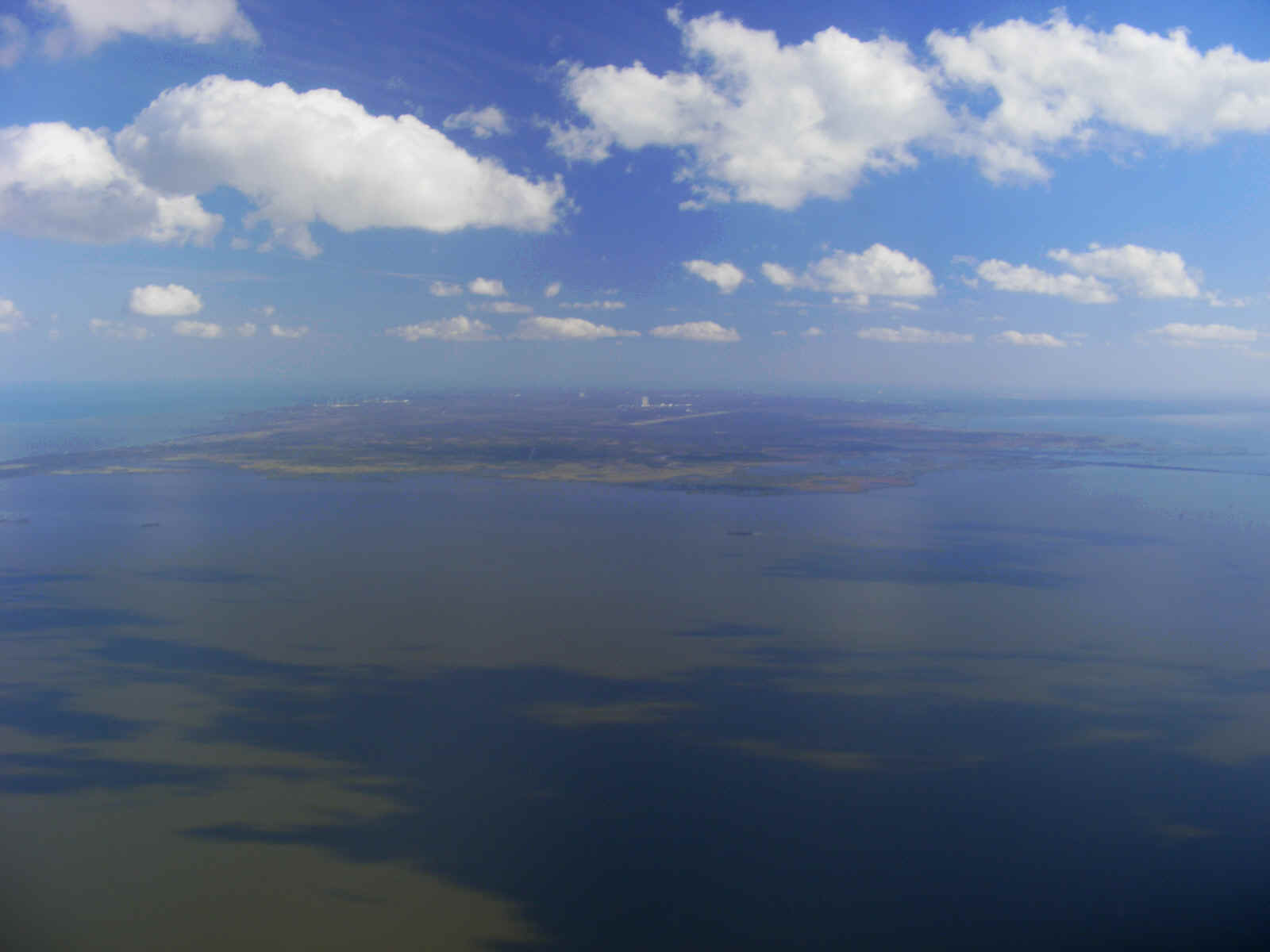 I always fly past the Space Coast airport (KTIX) at 2,500 feet to stay above their Class D air space from the surface to 1,900 feet MSL.  I was listening to the tower frequency when the controller mentioned a space shuttle on a barge heading south on the Indian River.  I looked down to see the barge in the river and turned around and headed north to take a photo as this view put the barge behind my left wing.  My shirt is reflecting off the inside of my canopy. 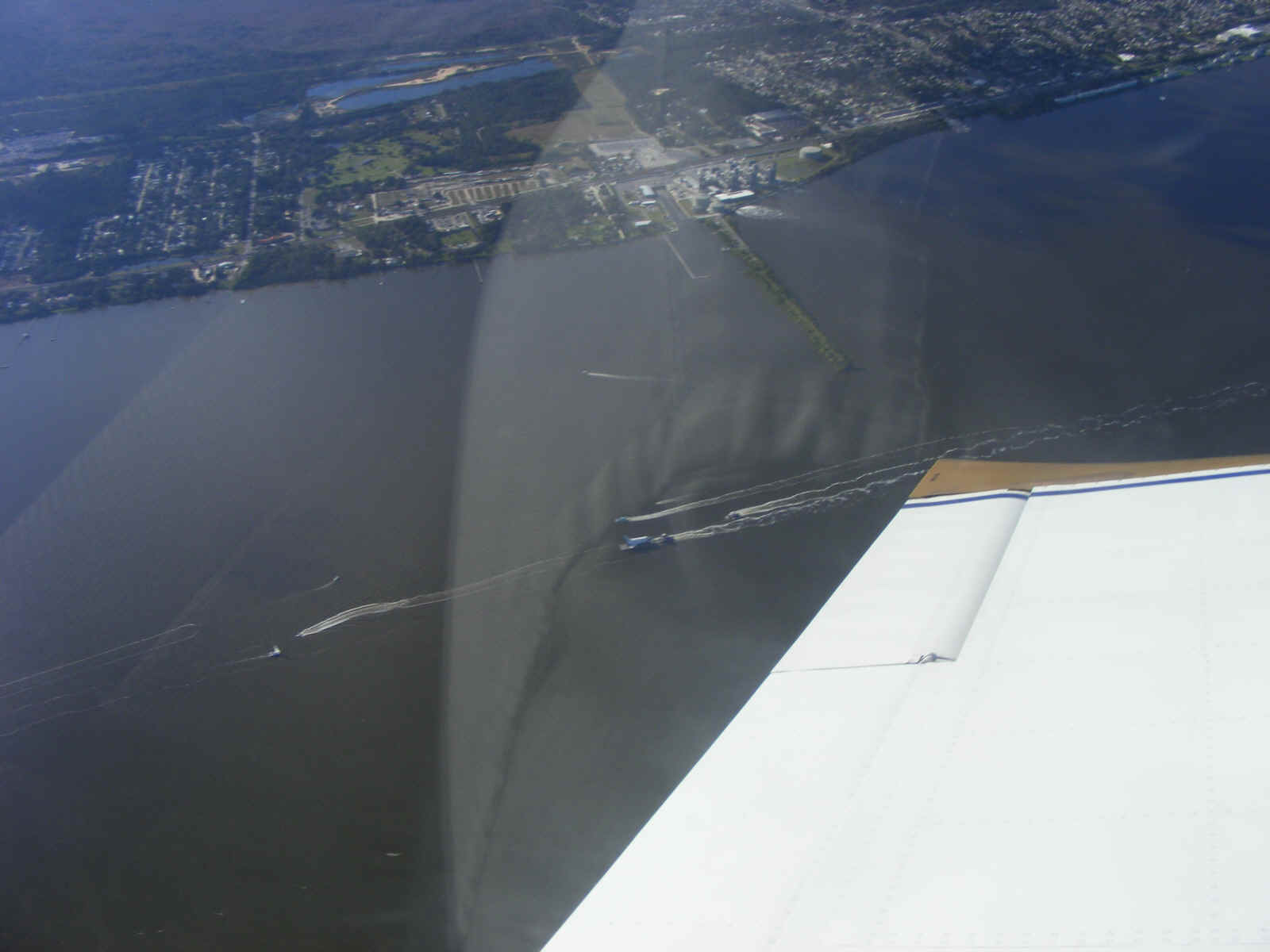 I began a turn to the west and came by the flotilla of boats going down the river near the tug and barge with a space shuttle mock-up on the barge.  The real space shuttles that have flown in space and early flight tests (Enterprise) are all in museums.  This mock-up was used for training and for the public to see a full-size shuttle up close during the years of active space flights.  It is being refurbished to be used for an educational "river trip" across our country as a traveling museum.  https://www.youtube.com/watch?v=YNv925xOe38
http://www.collectspace.com/news/news-011316a-space-shuttle-inspiration-move.html 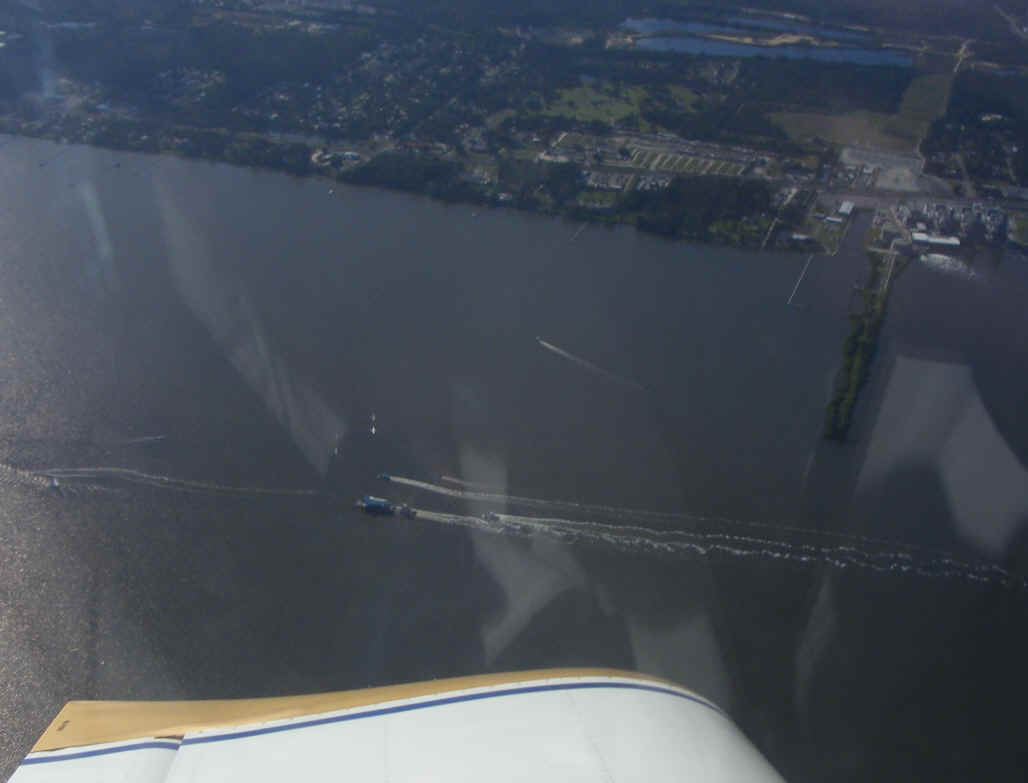 I was keeping the airplane in a "turn around a point" flight mode and taking a snapshot with my digital camera for these photos, all while maintaining my altitude above the Class D air space of the Titusville Airport.  This photo below was the best one I have from my fly-by.  I cropped and zoomed the center of the photo and posted it down below this "wide shot" seen here. 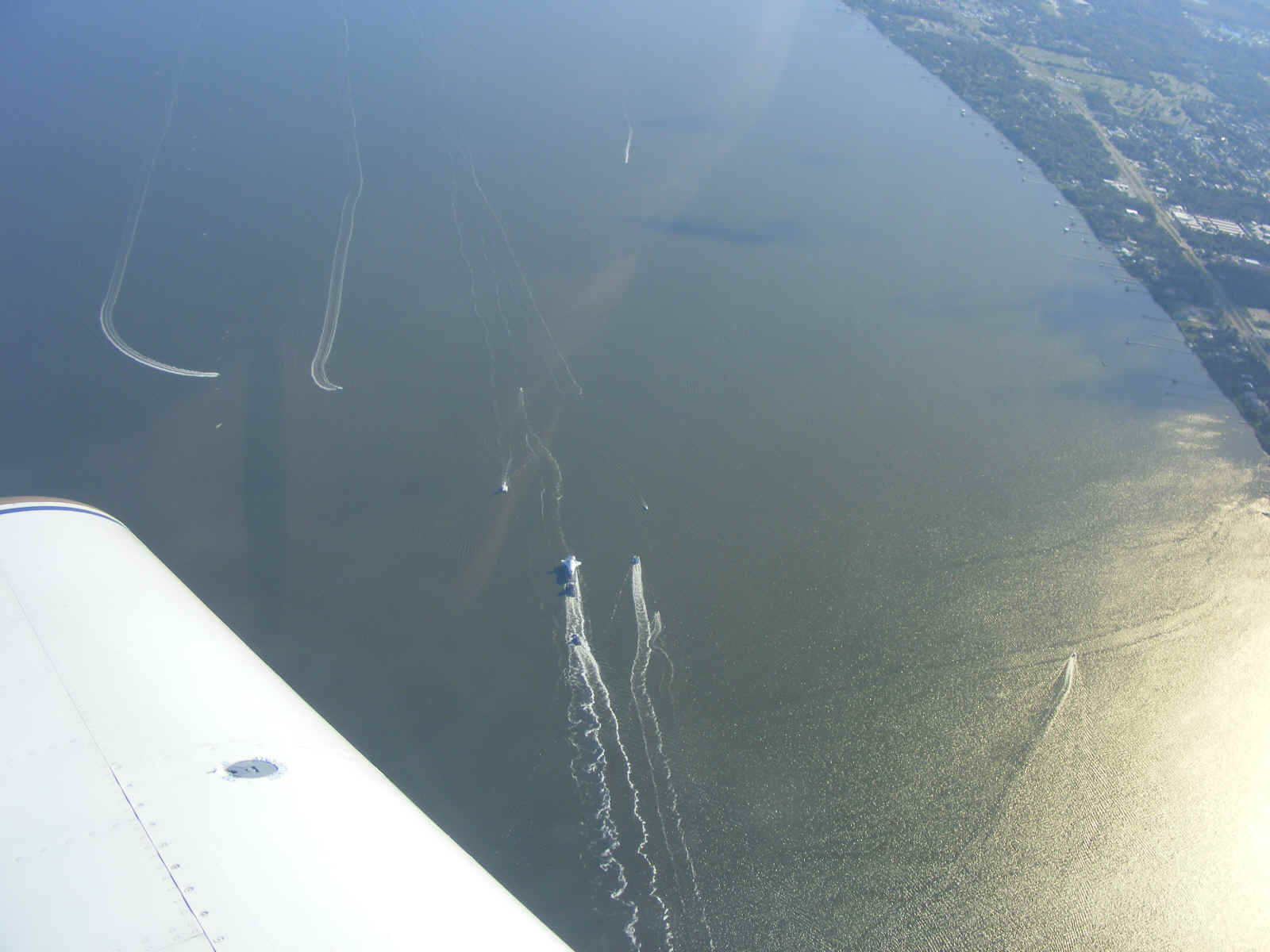 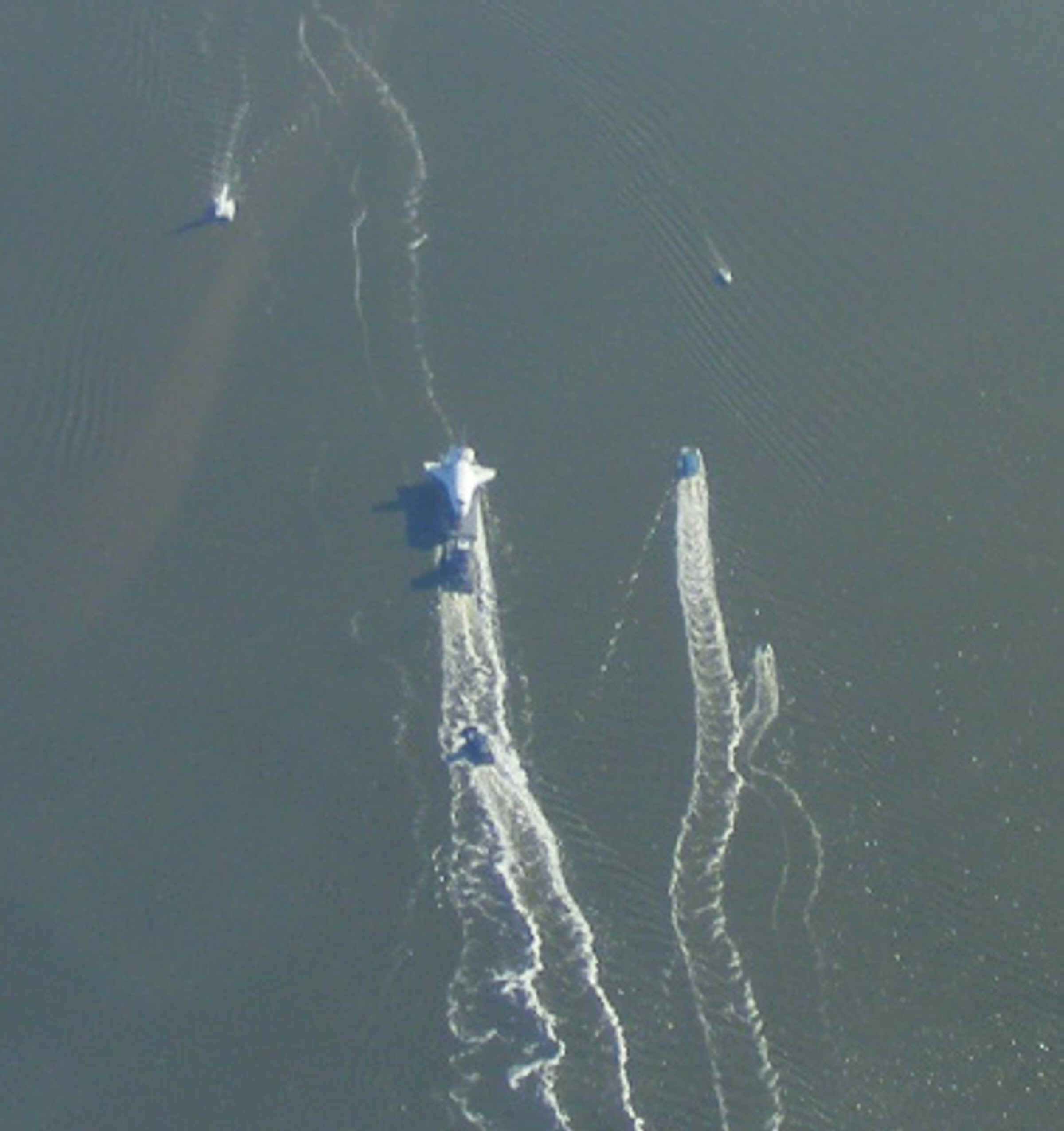 Here is my last photo from today.  It was not as clear as the images above. 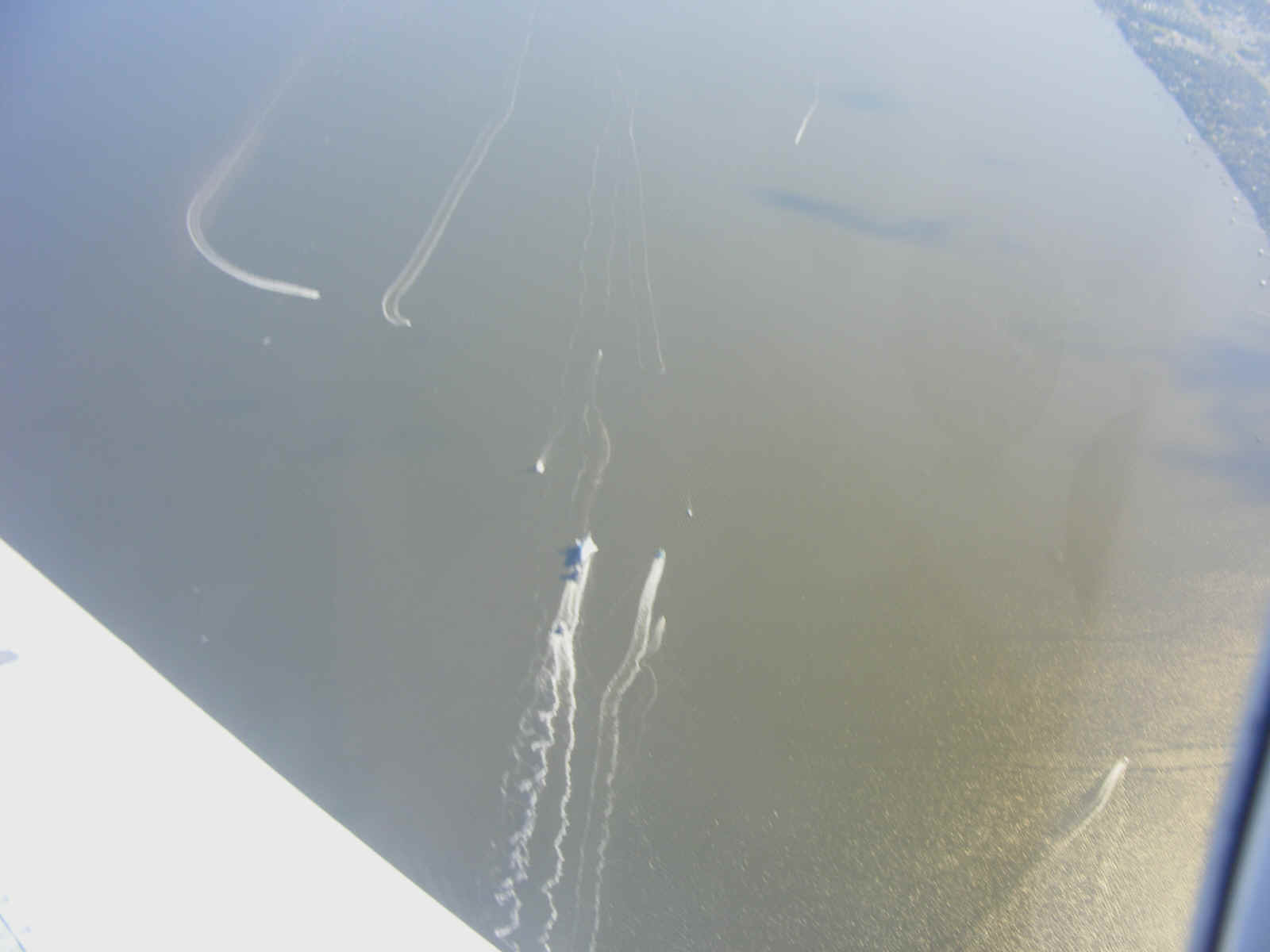 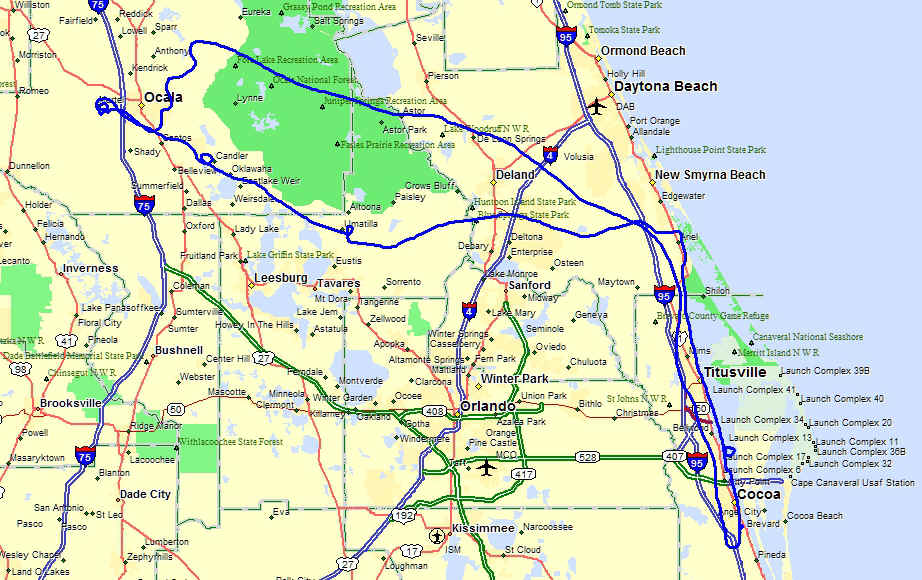 And here is the view of my flight over the shuttle barge and my circle to lose some altitude before landing at Rockledge south of the town of Cocoa. 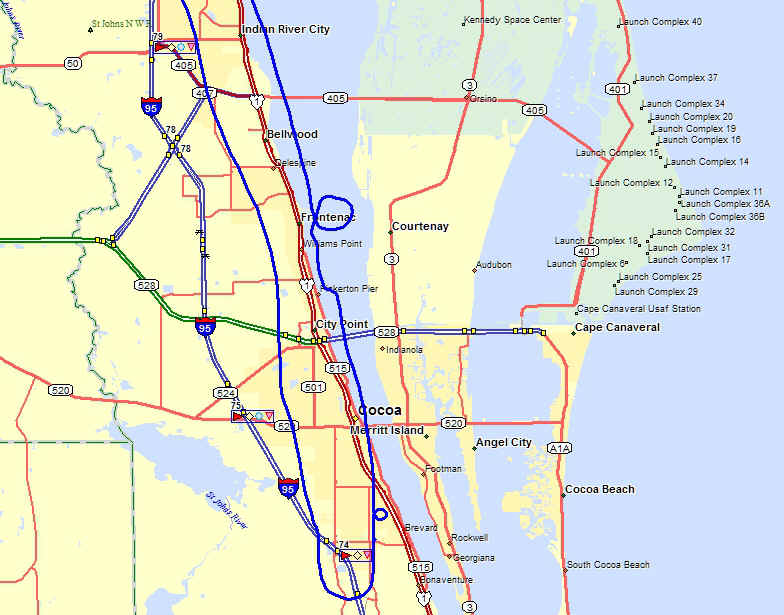