November 8, 2015:  I had time to update this web site a bit today.  I will continue the Texas road trip story from page 395.   I spent the weekend of October 16-18 with my oldest son Edward and his family in Round Rock, Texas and went to a model-aviation meet on Saturday with my son.  I published a small update to this site and added to that information on PAGE 395 with today's online efforts.

October 19, 2015:  Monday morning had an early departure before sunrise with a visit to Fort Hood, Texas.  I had three meetings with US Army units I have had telephone and email contacts to offer them fiber-optic solutions they need.  At the end of the day, I was in a Comfort Inn motel near the southeast corner of the DFW Airport.  I was there for a Tuesday meeting at 1:30 PM, but I also managed to arrange a Tuesday morning meeting with a company that designs audio / video solutions for sports arenas and stadiums.  I consulted with them on a project for the Tampa Bay Buccaneers stadium.

My meeting with staff members at the DFW Airport after lunch provided a way to have redundant satellite antenna feeds to all the airline terminals.  That fiber optic project began in 2012.  We also revised the fiber optic distribution design to ALL airline terminals to allow for additional satellite signals and feed the proposed SIXTH terminal to be built soon for the Super Jumbo Airbus A-380 aircraft.  I spent Tuesday evening at a motel on Interstate 30 near Mount Pleasant, Texas not far from Texarkana.  When I checked in at the motel and started to unpack the trunk of the car, my external computer keyboard was missing.  I replayed my actions from my checkout at the hotel near DFW and realized I had left my keyboard at the front desk when I went to the ice machine to fill my famous RED CUP.  A quick phone call to the front desk back there confirmed the keyboard was there in the manager's office.  I arranged to have it sent to my home.  It arrived this past Tuesday, November 3.

October 21, 2015: Wednesday morning also needed some office time before my departure.  I stopped for fuel and a light lunch just west of Texarkana.  I had a 2 PM meeting with a distributor in Little Rock, Arkansas.   I had visited that location in March 2014, but the main communications person was not there that week in 2014.  I was able to meet with him this day to introduce him to CATV fiber optics networks.  The meeting lasted just under one hour and I was on Interstate 40 headed for Memphis and taking some phone calls from customers who needed support.  I stopped for dinner in West Memphis to wait for the afternoon rush-hour traffic to subside.  I crossed the Mississippi River for the FOURTH time on this trip passing by Memphis on the south side and finding another Comfort Inn in Corinth, Mississippi to spend the night.

October 22, 2015: Thursday morning was another "office hours" online and "on the phone" session before checkout time.  I was in the Central Time Zone but my hunger was on Eastern Time.  I stopped at a Zaxby's restaurant for lunch and at a Wal-Mart to get a couple of my large Hershey's dark chocolate bars.  I had brought along a cooler bag on this trip to keep some cupcakes and chocolate bars from melting.  All the motels had small refrigerators in the rooms allowing me to freeze water bottles to put next to my snacks in the insulated bags.

I was making a few phone calls as I crossed northwestern Alabama on US 72.   It is a nice four-lane highway with little congestion.  There is no interstate highway running east and west in that area.  I was heading for Huntsville, Alabama for a potential meeting with a distributor there.  I first met him during my March 2014 trip along this route.  Today was different, he gave me a contact for a telecom designer who consults with a number of schools and businesses in North Alabama.  A couple of phone calls later and my route was re-directed toward Gadsden, Alabama for a Friday morning meeting with this new contact.  I am using the same logic that has worked well for our products with schools in Jacksonville, Florida.

October 23, 2015:  The motel I used was next to Interstate 59 in Attalla, Alabama just north of my morning meeting in Gadsden.   The internet connection there was the best of the entire trip.  I had the wide-open data rate of 38 megabits, the same as in my office at home.  I had a good meeting introducing our fiber optic products using my demo units to explain the details from the questions that were asked by the designer.

I spent Friday night with my youngest son Marshall at Kennesaw, Georgia.   We had some breakfast snacks Saturday morning at Chick-fil-A.  He had to get ready for a trip to Salt Lake City on a 2 PM flight from the Atlanta Airport.  I went over to see my sister northeast of Atlanta.  She had planned a lunch for me with her two daughters. We had a lot of laughs and memories of old photos that are becoming part of my family pages of this web site.  After lunch, I headed for home in Melbourne, Florida. 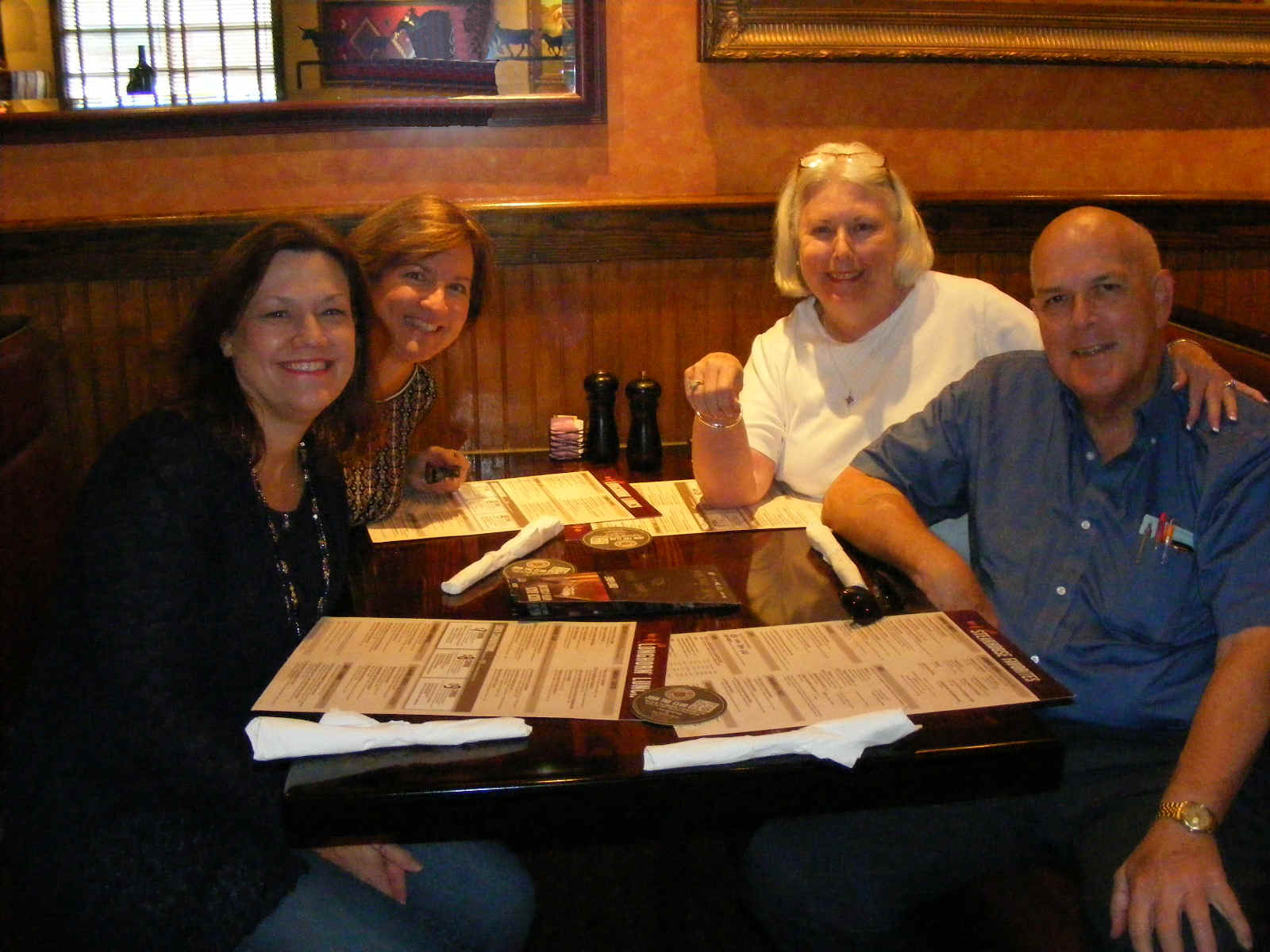 October 31, 2015:  I spent few hours of the last Saturday of October working on my airplane at the Rockledge Airport.  I pulled my airplane out on the ramp in front of the hangar and cranked the engine.  I set the throttle for about 1500 RPM.  When the cylinder head temps reached 350 degrees, I shut it down and pulled it into the hangar.  The Hobbs meter added 0.1 hours which could be up to 8 minutes.  When I took the cowling off, I removed the aviation spark plugs on the bottom side of the cylinders and tested compression on all four cylinders. Things were the same as last year.  I then removed the motor cycle plugs from the top side of the engine, and as before, they were in good condition.  I cleaned the aviation spark plugs of the lead deposits from the 12.1 hours the airplane has been flown since October 25, 2014.  With that completed, the first part of my annual inspection is done.   I have some time in the next couple of weeks to complete the rest of the inspection items on my list.  After that, all I need is the airport to be re-opened for my test flight.  With the legal action items that are pending, hopefully the airport will be open in December.  When that stuff is finished, I will offer some photos and some of the legal results of course.

The next few Saturdays will be working on the items of the annual inspection.  You have seen photos of the seats removed before, and we have peaked behind the baggage bulkhead.  I will take up the cabin floor under the seat locations to check out the control stick linkages to the aileron push rods, etc.

November 8, 2015: So here we are on the day I bring the web site up to date on the airplane side.  I started these updates this morning and it is now after 8:30 PM on this Sunday.  I took some time to go see the movie "The Martian" this afternoon.  I was suitably entertained and enjoyed the plot of the rescue of a stranded astronaut.  As I write this, I am watching a You Tube video with Andy Weir, the author of the book that is the basis for the movie.  He is hilarious as he answers questions from the employees at Lawrence Livermore Labs.  You can find the video by going to www.areslive.com that points you to You Tube.  More to come later...

December 12, 2015: The airport is still closed for legal reasons.  I did more clean up of my airplane today.  I also helped Wendell over the phone.  He wanted to check out his engine monitor in his RV-8.  We have the same engine monitors.  I sat down in my RV-9A and we both stepped through all the display screens one button at a time and compared results.  All is normal.  I took this photo after cleaning my canopy and wind shield, then cleaned all the dust off the airplane. 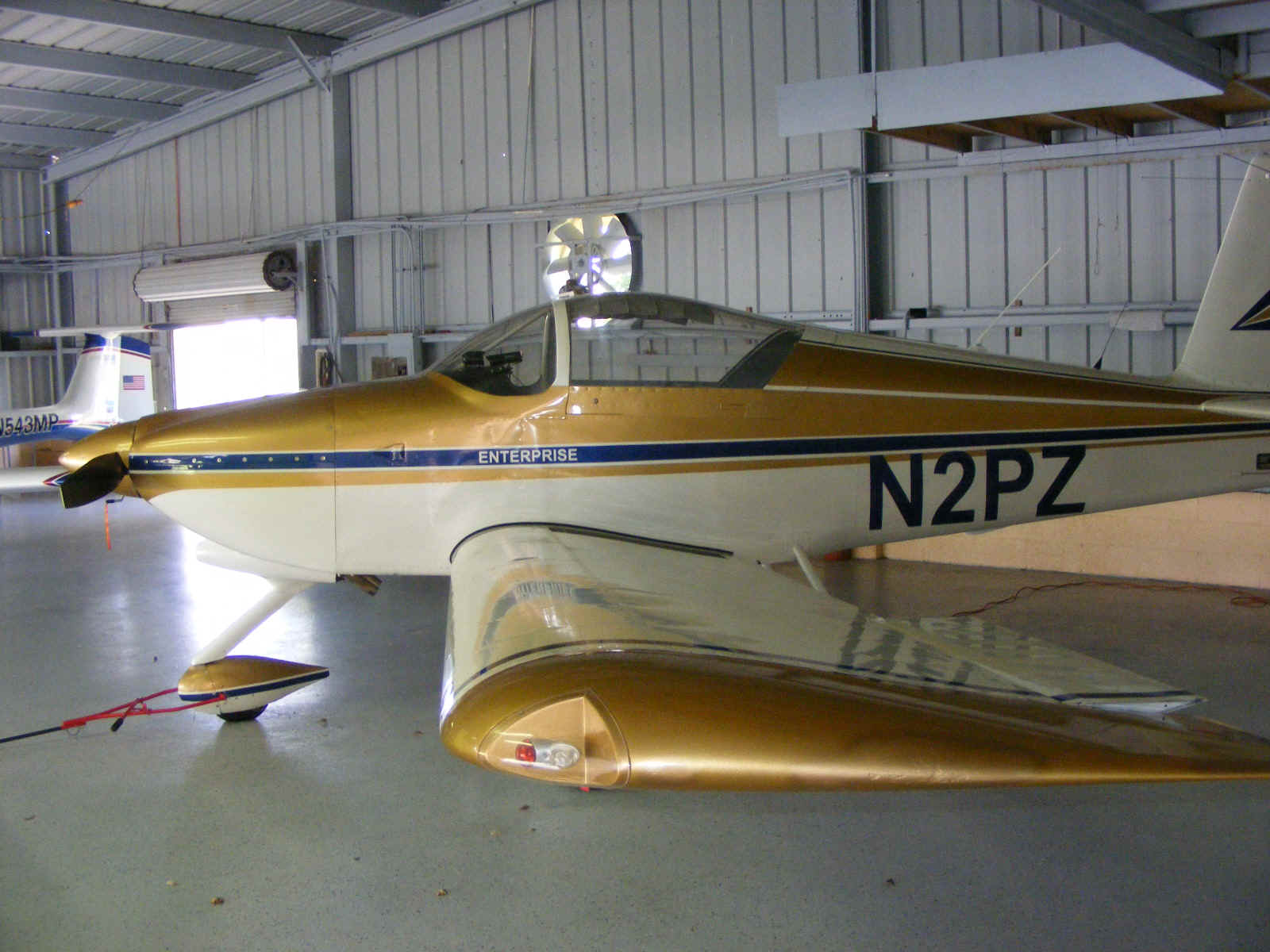 Ready to fly as soon as the airport opens again. 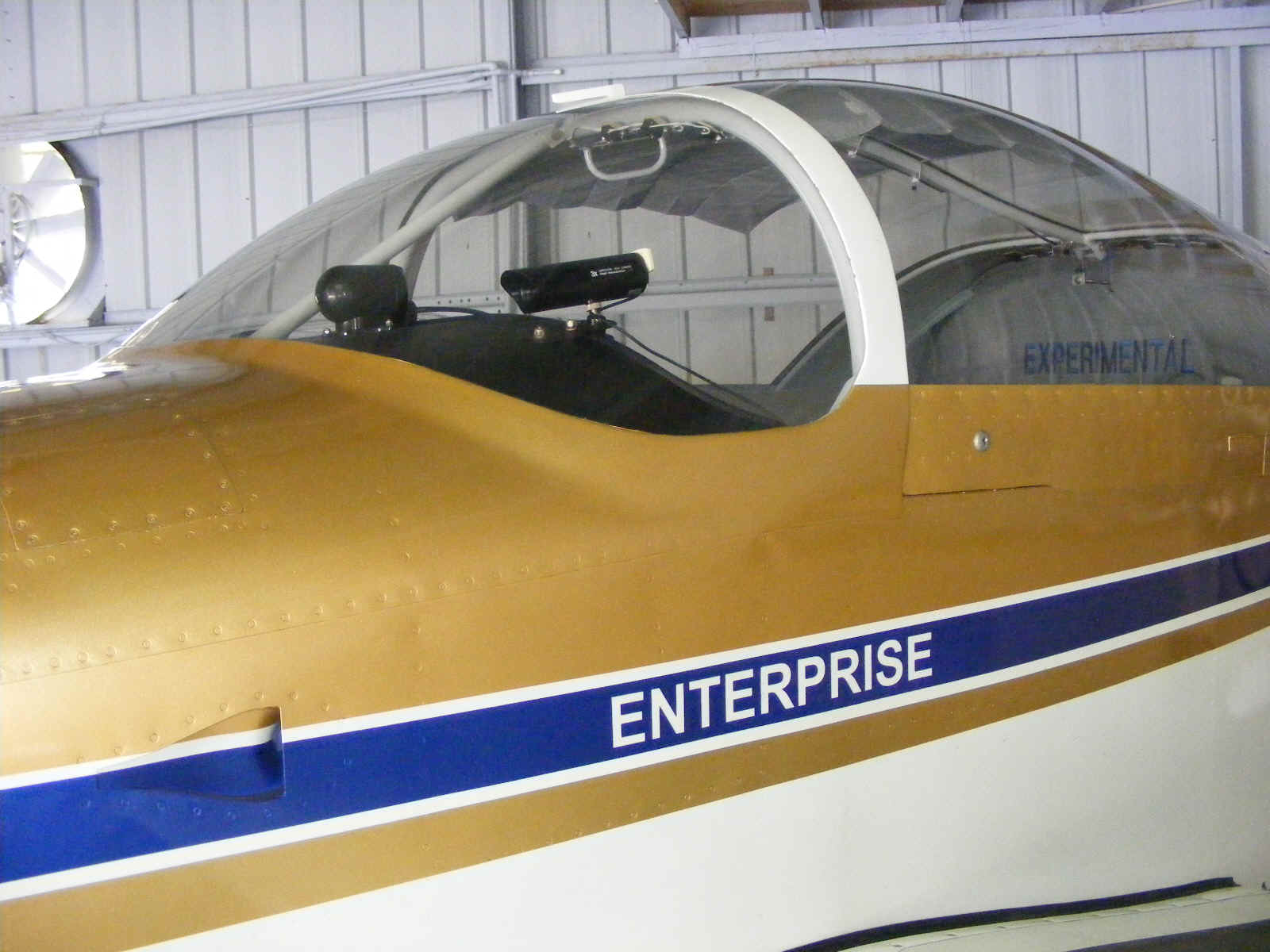 There are two new airplanes here as ALAS is now the USA dealer for a light sport airplane built in the Czech Republic.  My airplane is in the back corner of the hangar until the airport is open again. 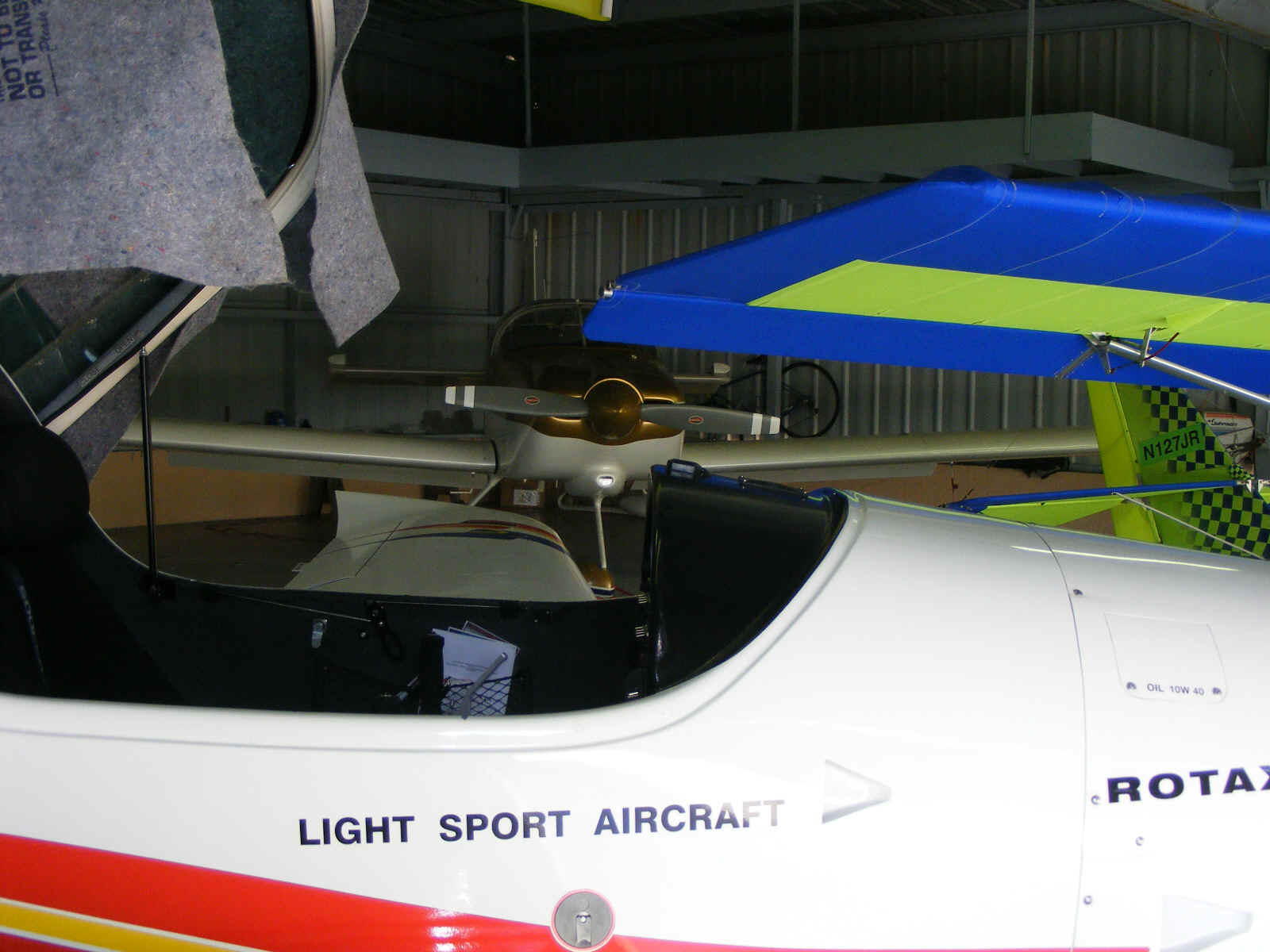 Here is the registration on the Czech airplane that was built in 2007.  I picked this spot to take the photo to show my airplane in the southeast corner of the hangar with these two light sport planes on the north end of the hangar.  The airplane nose seen at the left side of the photo is a new airplane shipped here in a container from Europe.   Billy assembled it here in the hangar and it is about ready for the first test flight.  For legal reasons, he is the only one on the field authorized by the FAA to do any flying to test these airplanes as they are "demonstrators" owned by the dealer.  Both airplanes have Rotax engines that use unleaded auto fuel. 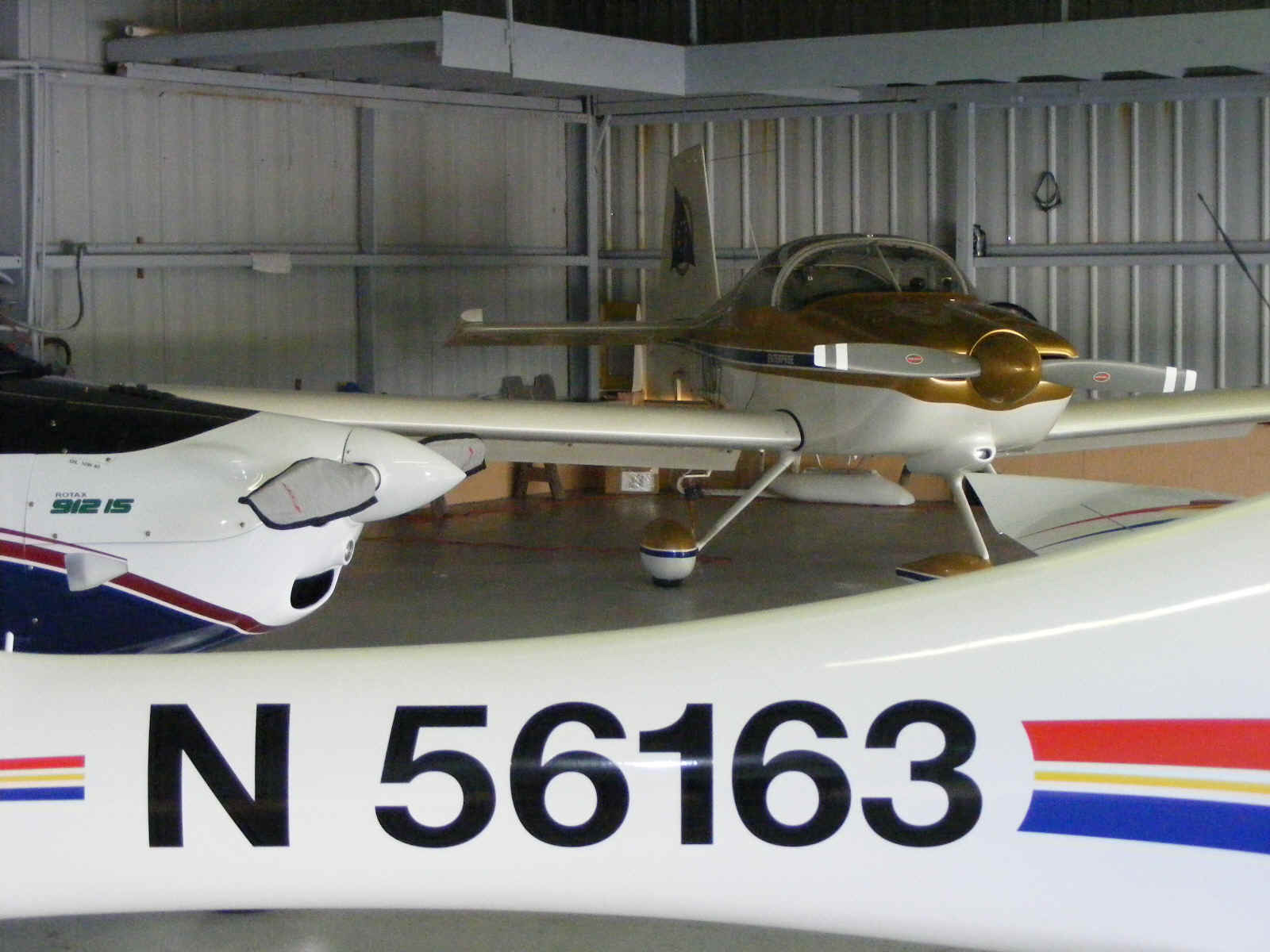 The legal issues are supposed to be settled in January.

December 22, 2015:  My day job is slowing down for the holidays as it does every year.  I have some time now to work on this web site as you can see by the new photos above.  With the new Star Wars movie released, I managed to see it in 2D this past Saturday night with my wife, then went back Sunday to see the 3D version.  The 3D glasses give her a headache.  I was able to hear more of the dialog in my second viewing and get a better understanding of the characters.  No, I am not going to talk about the plot.  Go see it and have the full experience.

I will be going to Jacksonville, Florida on Christmas Eve to visit relatives.   I should be back to work on this web site after Christmas Day.

December 23, 2015: I have mentioned in the past about using Oracle VM Virtual Box to run Windows XP on my main computer running Win 8.1.   When the VM software gets an update, it can appear as a different computer to the web server for this web site.  When that happens, Front Page 98 can end up reloading the complete web site to the server in Colorado.  Most of the time, only the changed pages are sent.  My cable company has recently upgraded the cable modem speed for all subscribers.  I was getting download speed of 38 megabits per second and upload at 2 megabits per second.  With the recent changes, the download speed is 56 to 58 megabits per second and the upload is 5 megabits per second.  The reload of the web server went much faster last night.  The current size of this web site is 1.07 GB on my hard drive.