March 1, 2015:  This page is a "blog" about the dull, cloudy, cold, and rainy days here in Central Florida from the past few weeks.  With weather that was not made for flying, I had plenty of time to work on my latest web project about Jerrie Mock and her flight around the world in 1964.  For those of you who are regular visitors, you surely noticed the paragraph on my home page pointing to her menu page and 15 pages about her historic flight.  I am running out of ideas on how to enhance her pages of this web site.  I am also not finding any original photos of her or the airplane other that some that are published in her 50th Anniversary Book from Phoenix Graphix.

The title at the top of this page is in support of my friends further north who have had snow and ice storms these past few weeks.  I was reading internet news articles and the weather.com web site this morning talking about new record-setting low temperatures.  The nightly network news coverage shows how folks up north are coping with all that snow, ice, and just plain bad weather.  I have reported on past snow in Chattanooga in these web pages.  The last flight of "Enterprise" was on January 31, 2015 to get fuel at Apopka Airport (X04).  All the good weather since then has not been on the weekends when I get a chance to go flying.  The forecast for the week ahead may be suitable for flying next weekend.  I will update this page to let you know.

The only "flying" I have been doing has been building a web presentation of flying with Jerrie Mock.  I feel I have presented a good virtual flight for those of you who have been reading those 15 pages about her Journey.  When the project started, I came up with only FOUR pages listing the high-points of her flight and some images I had found on the web.  At that point, I started thinking about how I could expand beyond the basic facts of her flight.  I started with SkyVector VFR charts from screen captures using my computer to convert those images into JPEG files for these web pages.  Then I realized I could travel with her via Google Earth using the same image processing methods.  Next came some image modifications to simulate the clouds, fog, and rain that were part of her journey.  After that, I learned how to adjust TIME of day in Google Earth to do night scenes with stars, then sunrise over the Pacific after she departed Wake Island heading for Hawaii.  The bottom line, if I could not go flying in the real world, I found a way to enhance the virtual world for the Jerrie Mock project.

Speaking of Wake Island, I found images before and after typhoon Ioke ravaged the island in 2006 as a category FIVE hurricane.  I found a 1964 image of the bowling alley / restaurant building showing a 1960 Ford station wagon and some other cars from the late 1950's.  That building was one of many that was destroyed by Ioke in 2006.   The real winner was finding a You Tube video of a driving tour of the island from 2012.  When I went back to read her chapter about Wake Island, Jerrie talked about the driving tour on the day she was there in 1964.  I will be updating her pages as I find or create more content relevant to her 1964 journey.  Be sure to clear your temporary browser files before visiting her pages to catch any updates as they are uploaded.

March 8, 2015: Finally, a day to take a short flight in the local area.  I was thinking about heading for Deland Airport staying clear of the Orlando Class B airspace.  I got up toward the north end of the Indian River Lagoon and had the AWOS from Deland dialed in on the radio.   The warnings about skydivers and no touch-and-go landings changed my mind.  I thought briefly about a low pass over Spruce Creek airport under the Daytona Class C outer ring, then decided I did not have that much time to be out playing around.  I turned back to the south following the Indian River and decided on a full-stop landing at Merritt Island (KCOI). 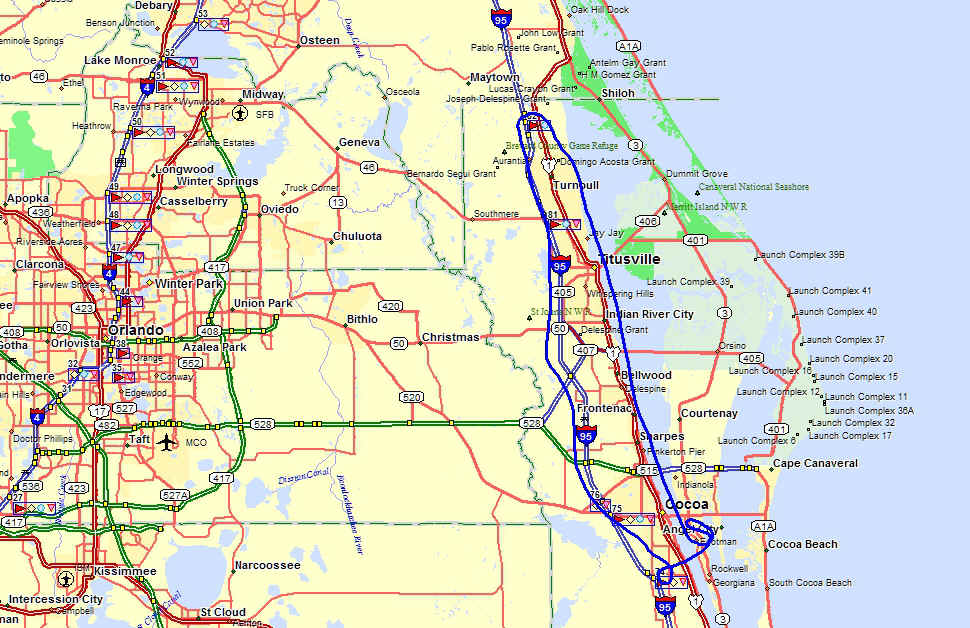 The northbound ride was west of Interstate 95 and clear of Titusville Airport (KTIX) class D and the helicopter training they have there.  The Saint John's River is the dominant feature inland from the ocean about 20 miles or so.  It is one of the few rivers in the USA that flows NORTH going up to Jacksonville, Florida before ending at Mayport where it meets the Atlantic Ocean. 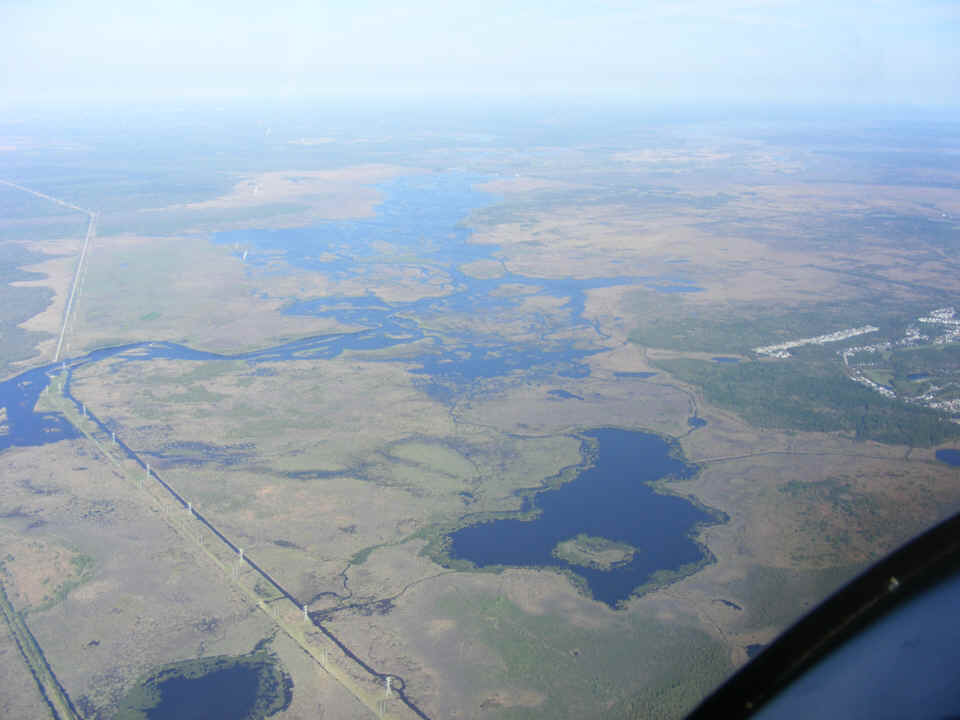 A quick snapshot looking northeast shows the last causeway opposite downtown Titusville that connects to the north end of Merritt Island and the Kennedy Space Center property north of the shuttle landing strip. 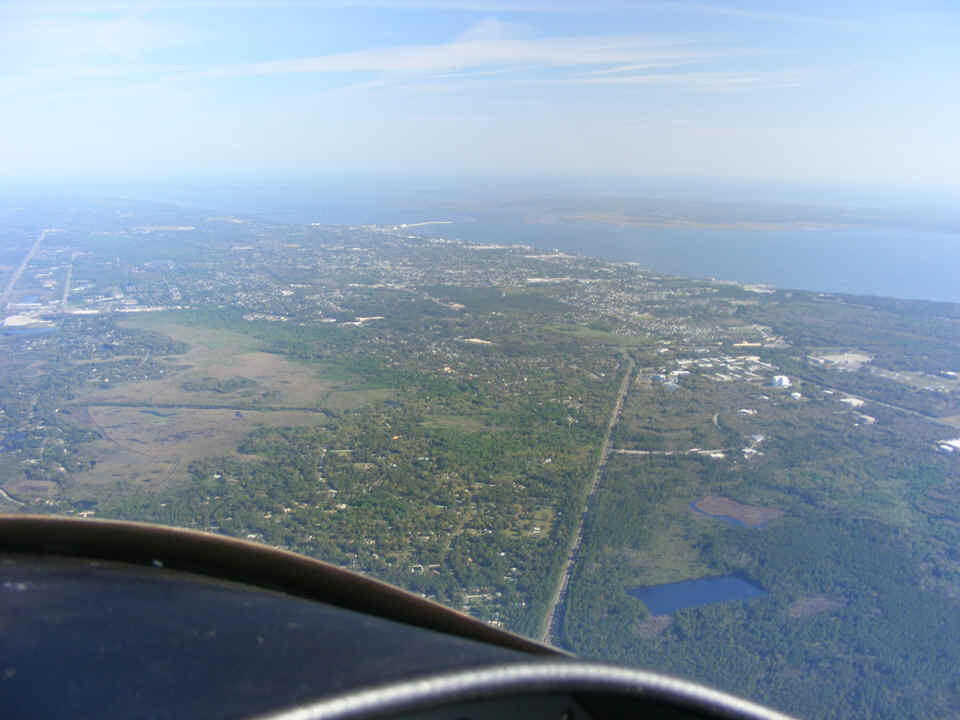 A Cessna was in the traffic pattern when I flew over Merritt Island airport and entered the left downwind for runway 11 for my full stop landing.  Departing from there also on 11 with a quick right turn headed me back to Rockledge.  I flew over mid-field at 1,500 feet and pulled the power back to idle for a simulated engine out landing with no problems from the cross wind on approach to runway 36. 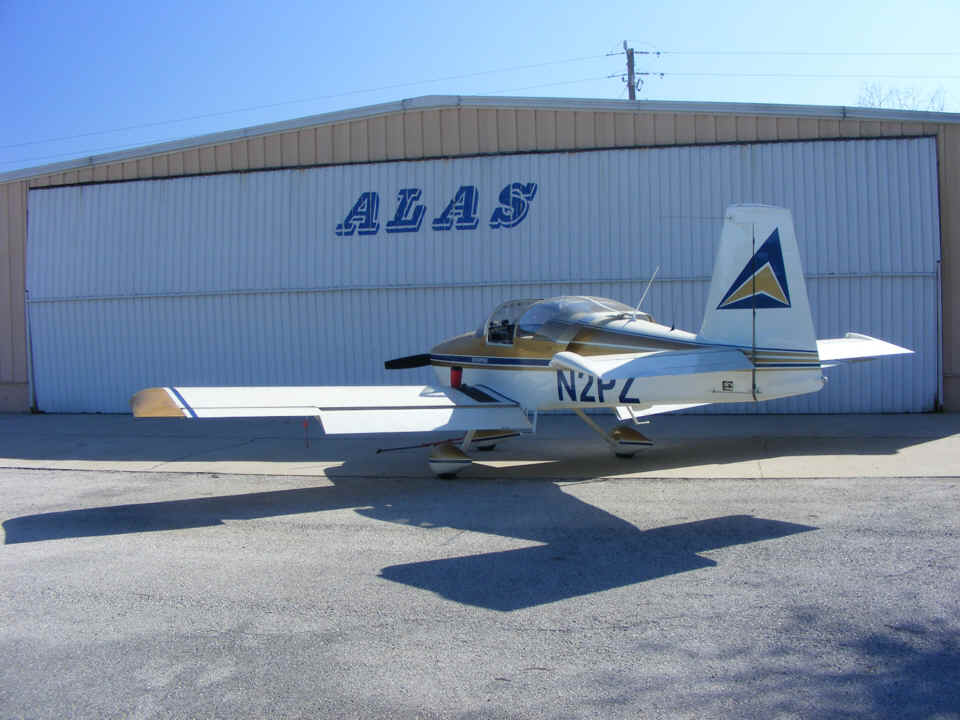 The airport office has that look of home to it with the canopy over the front porch.  An artist lives in the apartment upstairs. 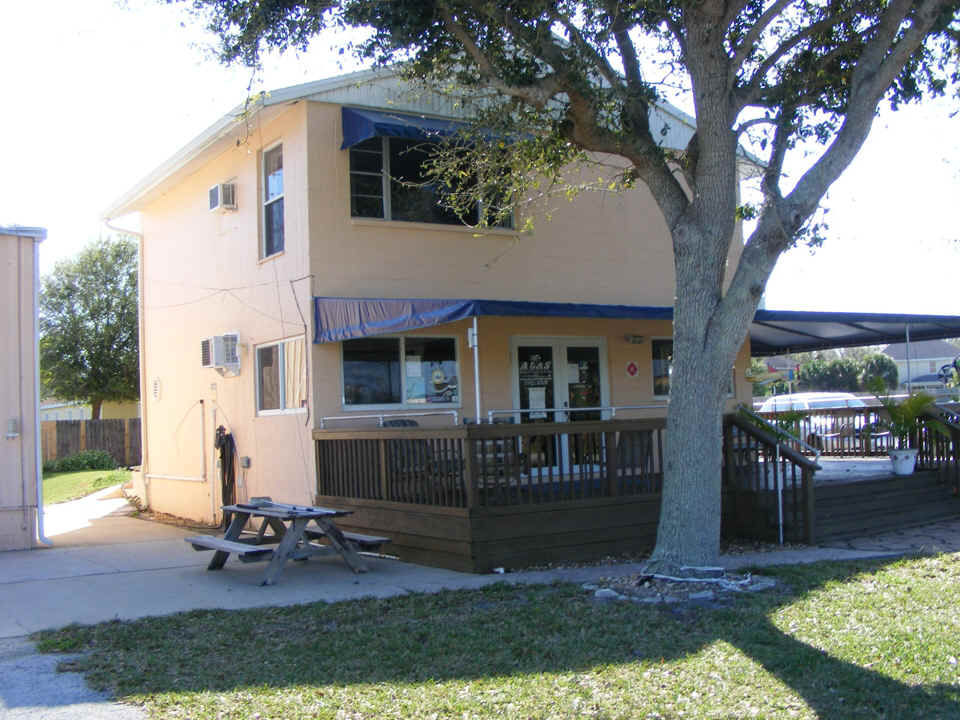 March 14, 2015:   Wendell and Terry came down from North Georgia for the air show at the Titusville Airport this weekend.  They attended the event yesterday and came down to the south end of Brevard County this Saturday morning.  We were in this local family restaurant from 10 AM to 1 PM today for a good time talking about events old and new.  This felt like going over to Wendell's hangar on a Saturday morning with lots of subjects discussed, not just aviation.  Bill Blackwood had a chance to meet them after following all our adventures from this web site over the past few years.  Terry mentioned the possibility of another trip to Alaska, but no time frame was mentioned.  He was talking about a couple of airplanes making the trip together. 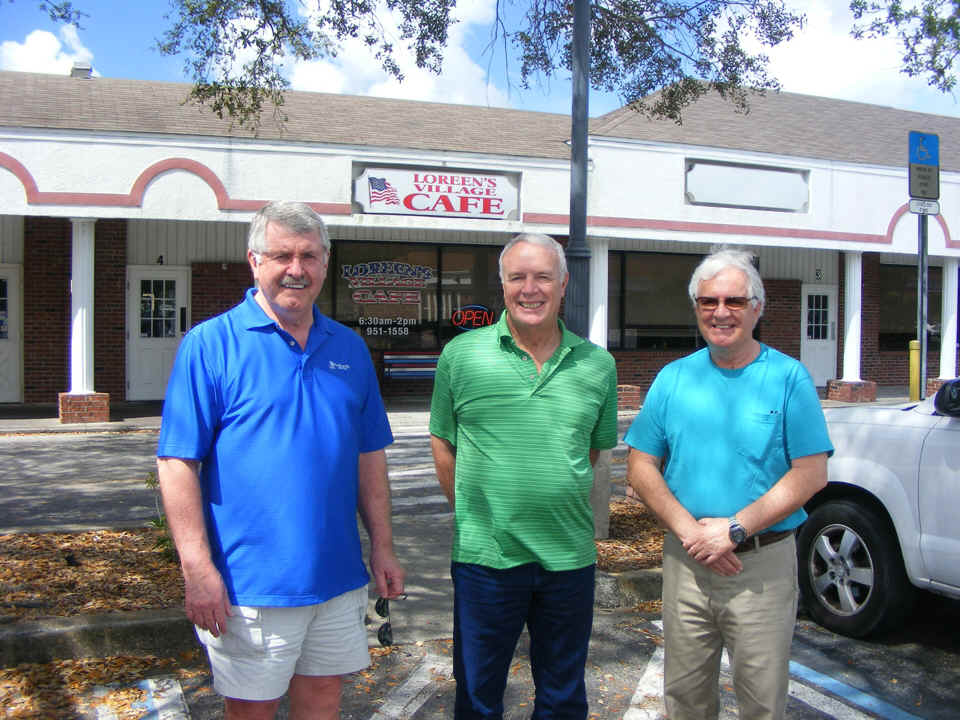 Terry and Wendell are heading down to Sebastian, Florida to meet an old friend Terry met in Viet Nam.  They made the trip to Florida in Wendell's Lexus which is for sale.  Their return trip to Georgia could be Monday. 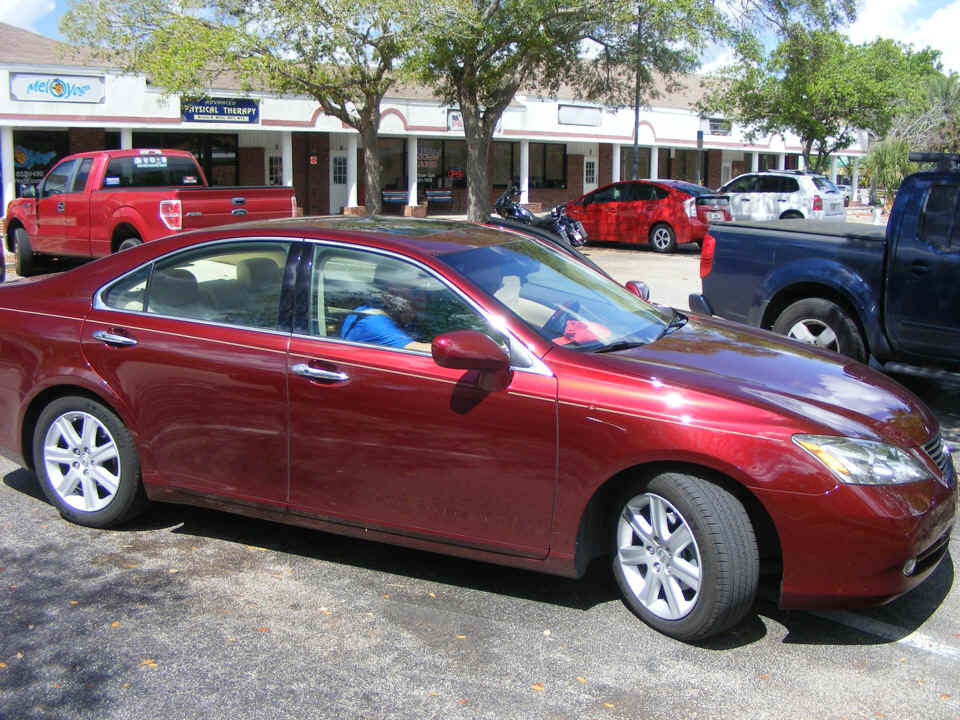