March 28, 2015:  Finally, a Saturday with clear weather over the Florida Peninsula.  A cold front came by yesterday leaving a morning temperature of 53 degrees when I left home for the Rockledge Airport today.  Here is the view before engine start in front of the hangar.  My take off time was just past 10:30 AM for what would be a one-hour flight over to Ocala for lunch.  The cross wind from the west made things interesting today. 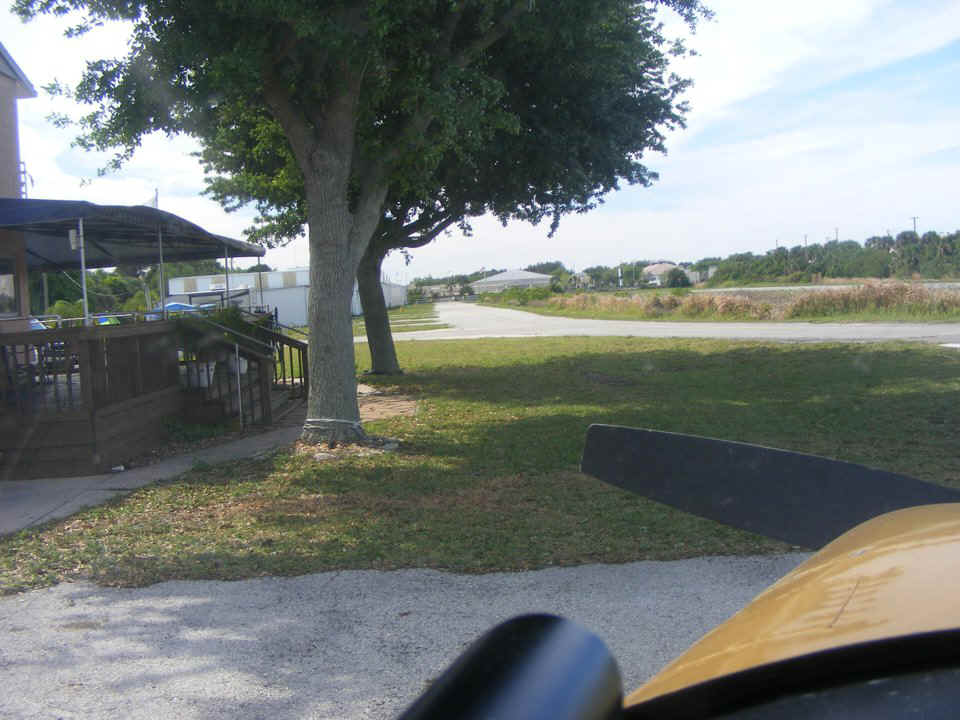 There was a 14 MPH cross wind on departure.  I thought about what I learned from one of my flight instructors and the demonstration he provided with a Cessna 172 when I was a student pilot.  He kept the Cessna firmly on the ground with a little down elevator until he would jerk it off the runway and immediately set up a crab angle to track the runway centerline just after lifting off.  Since RV nose wheel airplanes require a different procedure, the cross wind can push my airplane a bit as it becomes light on the main landing gear.  The nose wheel is up as soon as possible to minimize the weight on the front wheel as the airplane rotates on the mains.  As soon as the mains leave the runway, some rudder into the wind is needed to immediately establish the crab angle that will follow the runway center line and its extended path during the climb out.  That is especially true at Rockledge since there are tall trees west of the runway at the north half of the runway.  Things get a bit bumpy while climbing above the tree top height.  I followed the Saint John's river just enough to get a look at the bridges at state route 520 and 528. 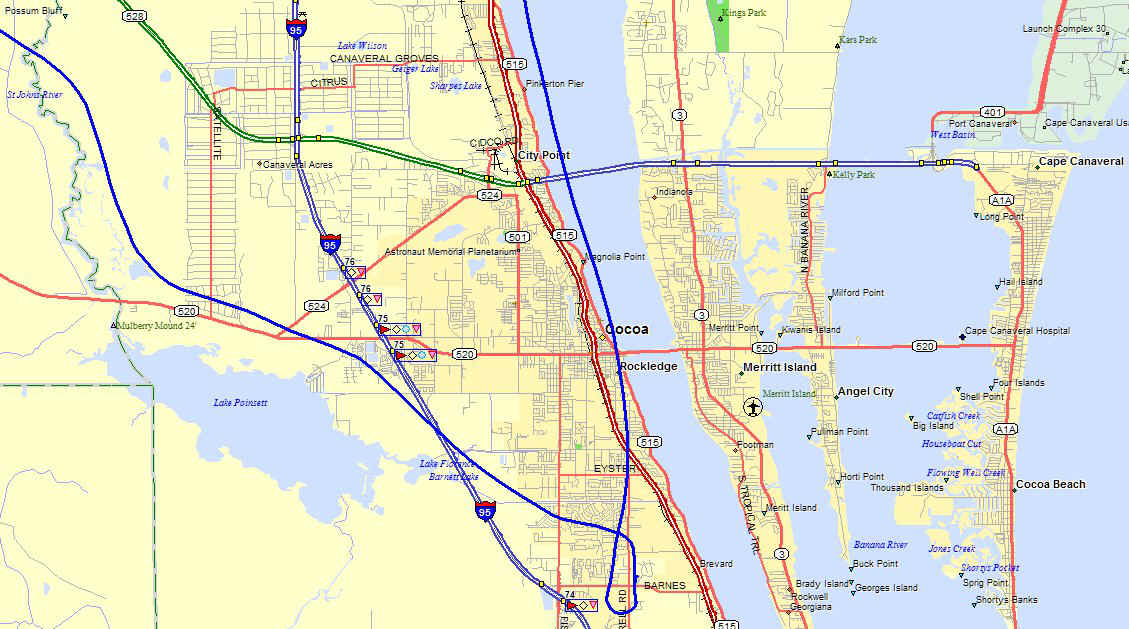 The flight today was again through the VFR flyway north of Herndon (KORL) and south of Sanford (KSFB) cruising below the 2000-foot ceiling to stay below the floor of the Class B air space belonging to Orlando Approach.  The Apopka Airport was my waypoint beyond the other end of the "tunnel" before I climbed higher into smooth air.  I trimmed the airplane at 4,500 and took a look at the Dynon EFIS-D10A to see the headwind up there was 43 MPH while my GPS reported 116 MPH over the ground.  I descended back down to around 2,500 feet and the headwind was again less than 20 MPH.  It was bumpy again, but at least I was moving along at a good pace.  I did keep an eye on the yellow arc on the air speed indicators in the turbulence.  I was level again as I crossed over Leesburg Airport (KLEE).

Ahead was the area of Florida known as "The Villages" which is a HUGE housing development that is the fastest growing "town" in Florida.   This town stretches about 10 miles from north to south and has over 51,000 residents.  The area is NOT an incorporated city. 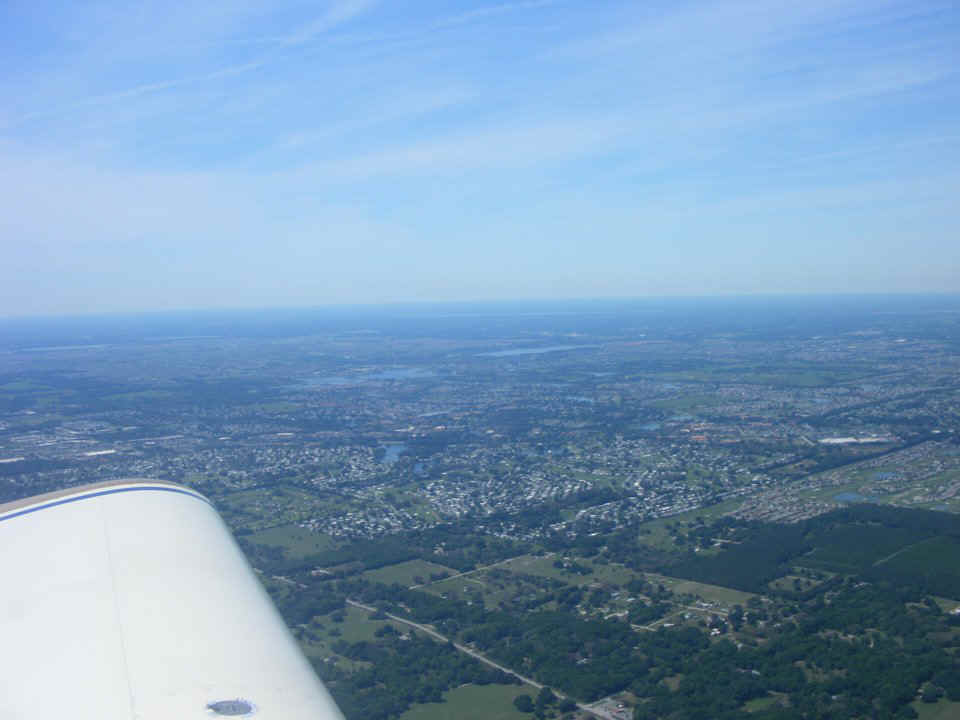 Here is a closer look along my flight path.  Take note of the grass air strip near the bottom left of the photo. 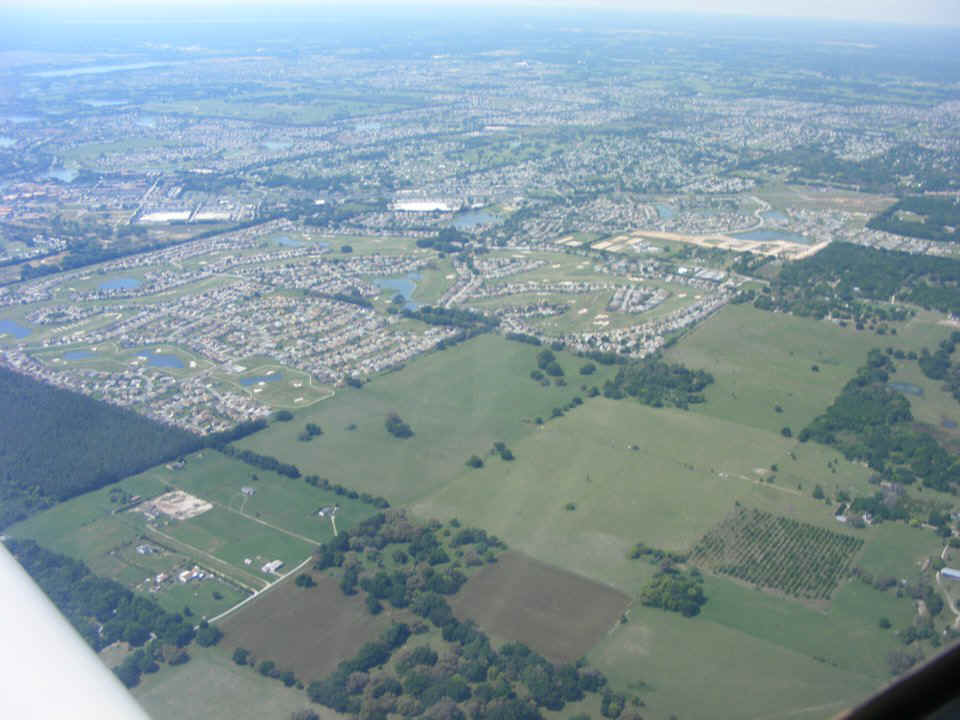 The end of that "town" where things turn green again is about 10 miles south from the northern end of the project. 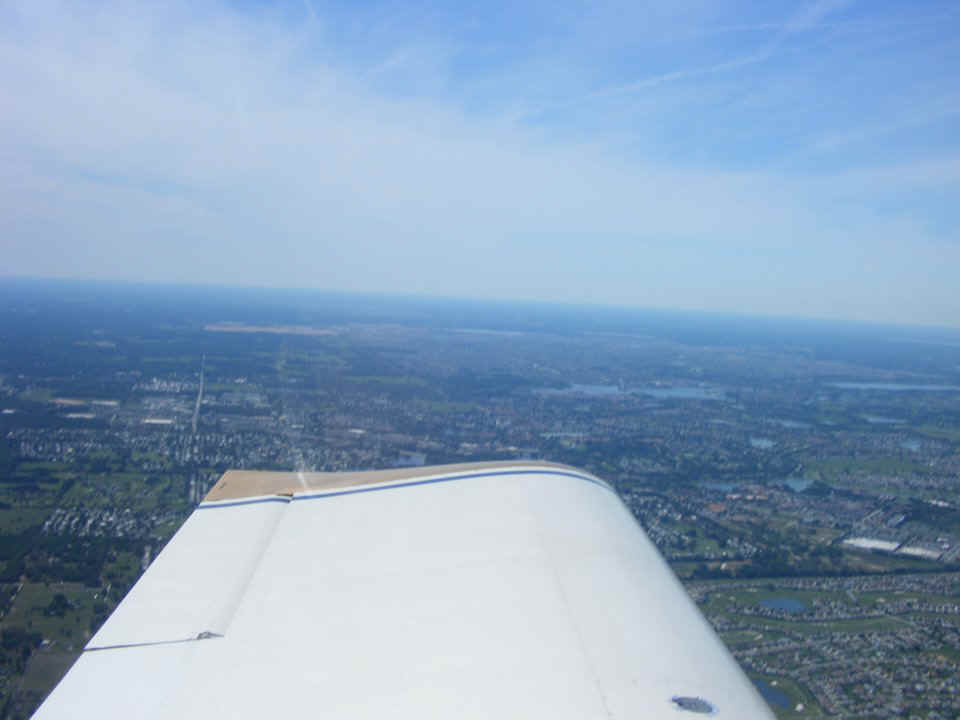 I made a right turn and went up to an area where I worked with Microdyne Corporation from 1978 until 1989.  This was an area built by General Development known as Silver Springs Shores.  It has housing and business locations for manufacturing.  The empty area with the grass air strip was not sold to General Development.  The owner is a chiropractor and pilot.  The name "Back Achers" is a play on English words where acres is pronounced the same as achers, as in people with back pain.  The grass runway is 3000 feet long. 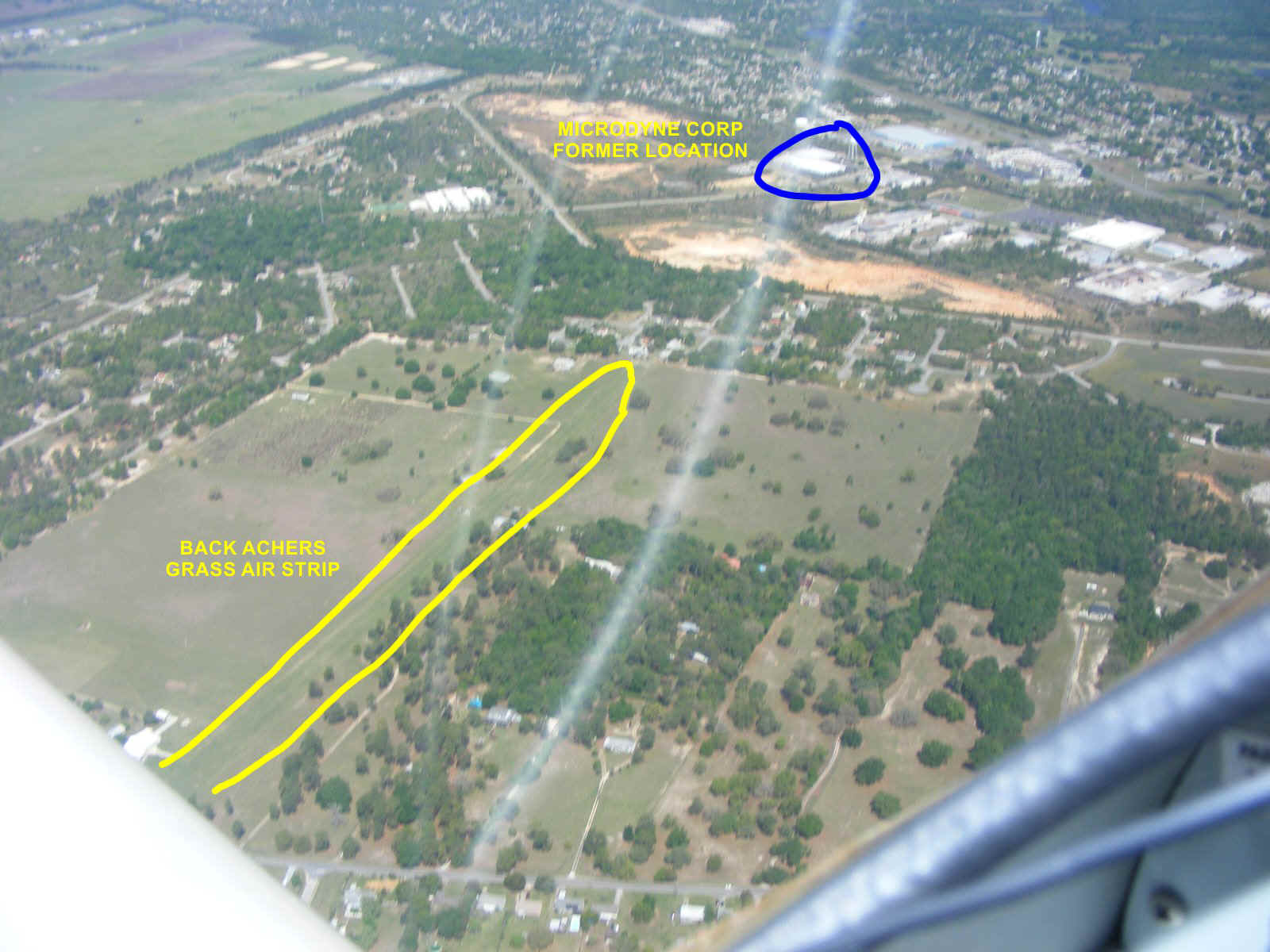 I flew over Leeward Air Ranch when I turned on course for the Ocala Airport.   I did not take a photo of the aviation community there.  Maybe next time... 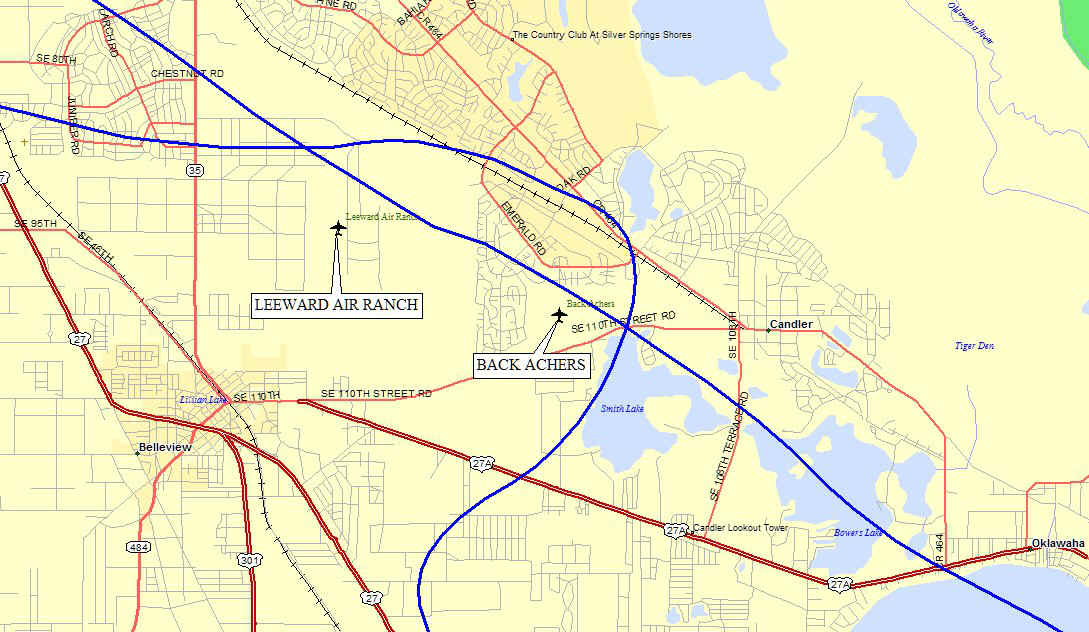 The landing at Ocala was on runway 36 with some turbulence about 20 feet above the runway.  I felt like I was on a roller coaster during the crosswind landing approach before I could safely get into ground effect just a few feet above the runway.   I landed with flaps up on the 7,000-foot runway.  I was so focused on the airport, I did not notice Interstate 75 on arrival or departure after lunch. 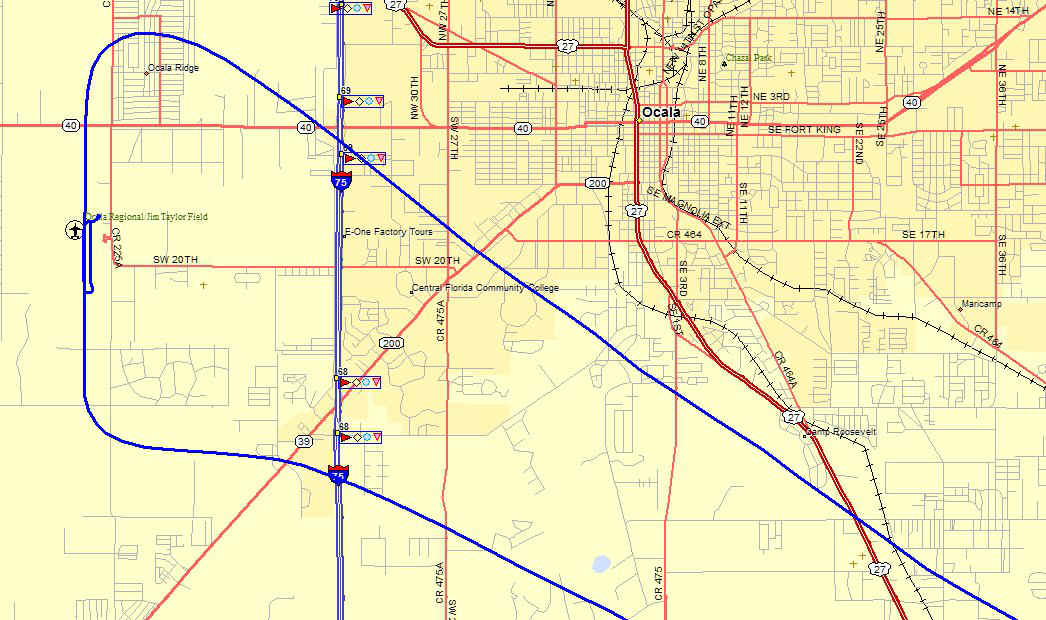 On the ground at Ocala, there were a number of bigger private jets. 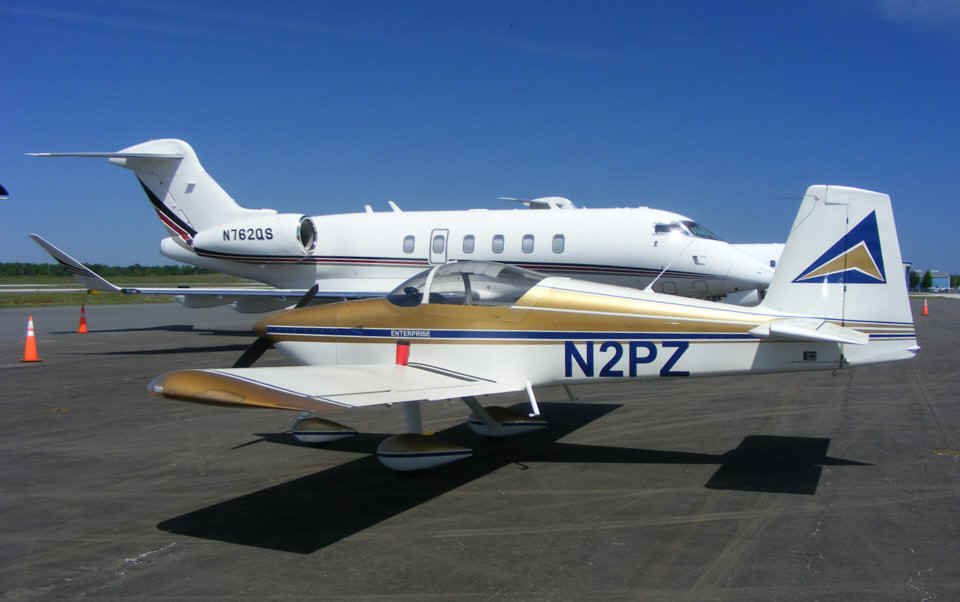 The restaurant is inside the blue FBO building at the edge of the ramp at Ocala.  There were two propeller planes parked to the right side of this photo just out of the frame.  When I came out after lunch, there was a Bonanza V-tail parked up closer to the restaurant entrance and the two smaller airplanes had departed. 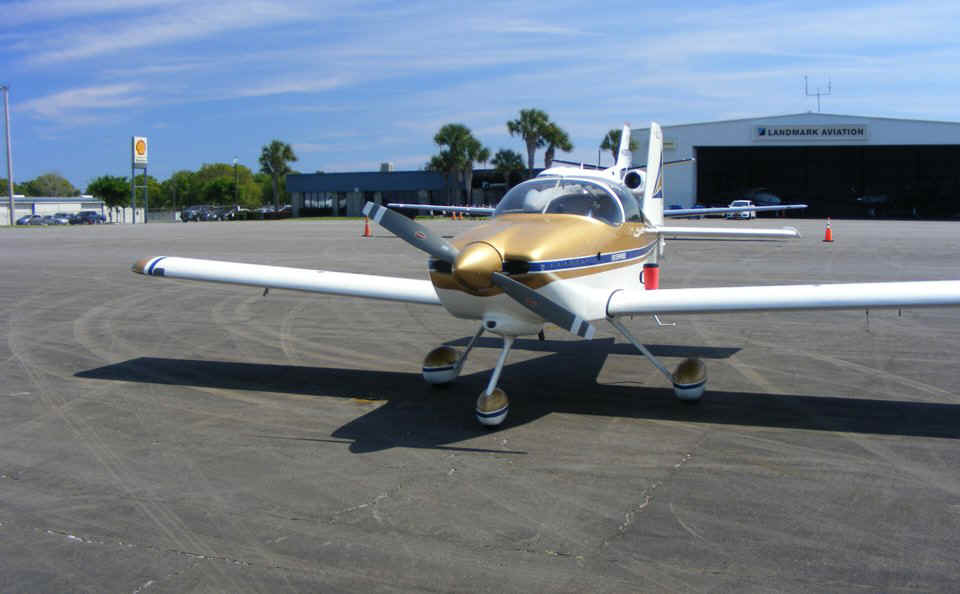 I stopped at Umatilla Airport to fill the fuel tanks with 15.9 gallons of 100 low-lead AVGAS.  As you can see, another RV pilot pulled in as I was filling the tanks on my RV-9A.  He bought this RV-7 with only 200 hours on it.  The pilot is an A/P mechanic and also has an A36 Bonanza.  He lives at Leeward Air Ranch near Ocala and has some experience in CATV from when he lived in Missouri.  I gave him my n2prise business card to point him to this web site. allowing him to see how these airplanes are built.  His fuselage is identical to mine except for the placement of the main landing gear and the tail wheel.  My wings are longer and shaped differently.  His engine is fuel-injected and does not have the carburetor air inlet seen on my cowl. 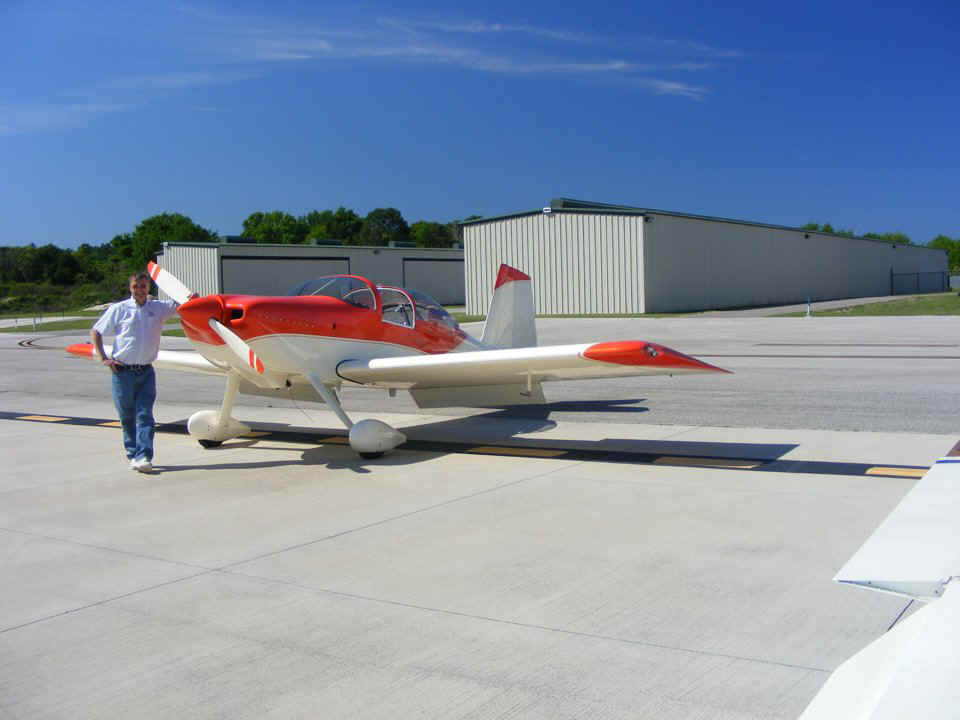 The ride from Umatilla back to Rockledge was around the north end of the Class B air space and high enough to take advantage of the 45 MPH tail wind.  I looked at my GPS ground speed one time to see 205 MPH at the same time the Dynon was reporting 160 MPH true air speed.  I made the usual run down the Indian River above the Titusville Class D air space before arriving at the Rockledge Airport. 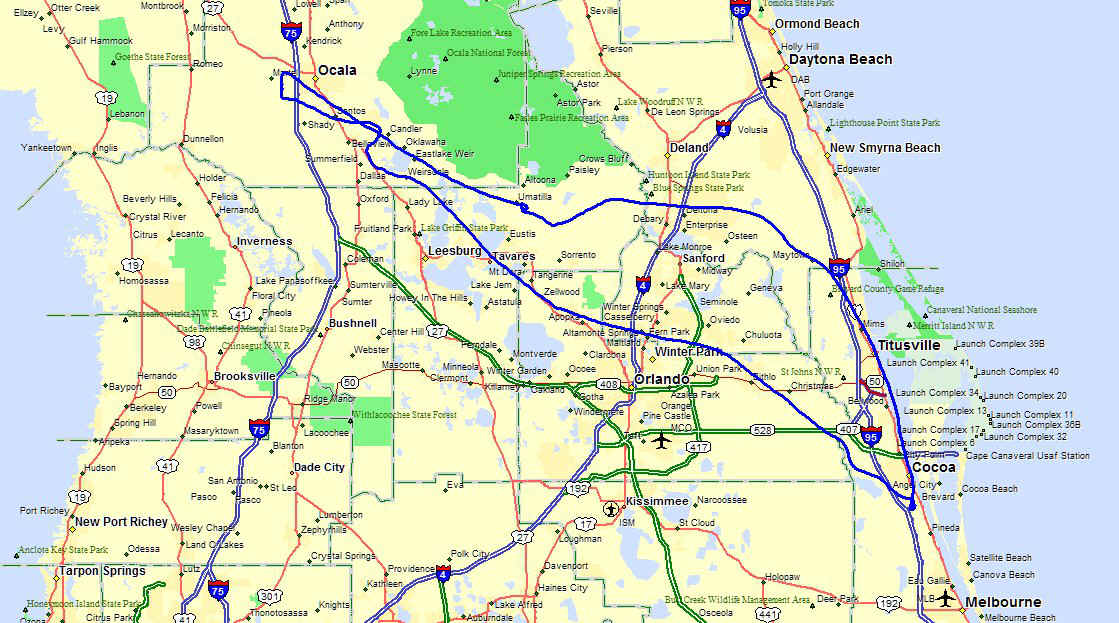 The downwind crab angle was excessive as the wind at 1,500 MSL was blowing at just under 20 MPH from the west.  I over shot the runway 36 center line as I was turning final and had a bigger crab angle into the wind to get lined up with an extra 10 MPH on final toward the runway numbers. 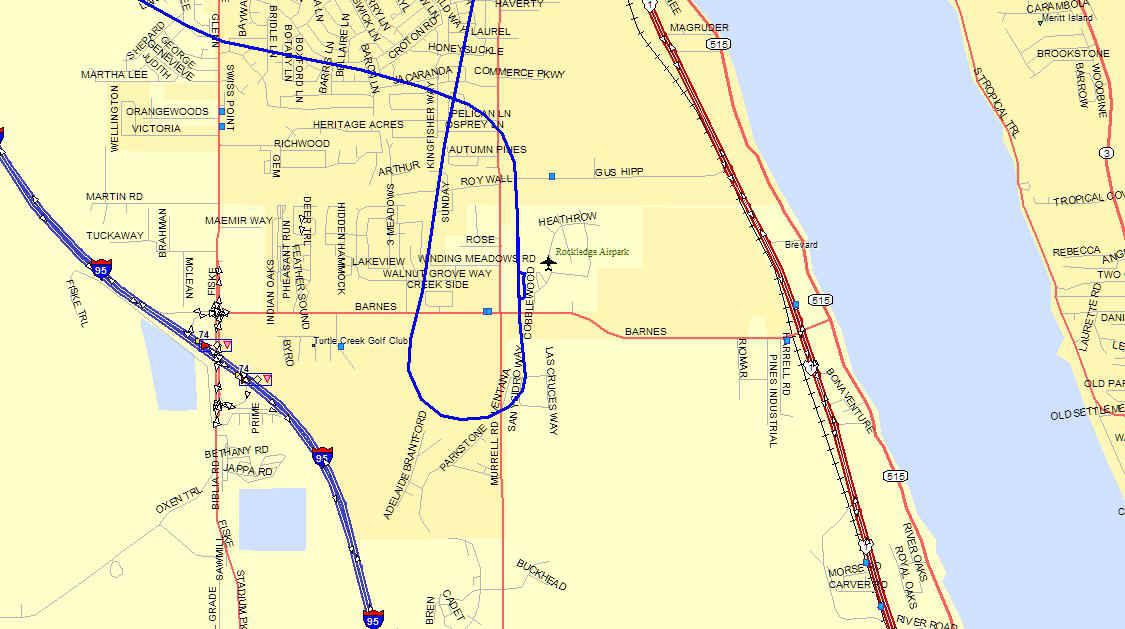 Things got interesting as I dipped below the trees near the west side of the runway.  I punched the rudder just before touching down, but still had some drift until the main landing gear had enough weight on them.  Bill was closing the hangar doors as I landed and he opened them up as I was pulling up to the ramp.  The Hobbs meter shows 371.6 hours after 2.2 hours of flying today.

April 4, 2015:  Saturdays are for chores and sometimes some flying.  I had noticed the strobe light on the right wing tip was not working when I performed my pre-flight inspection last weekend.   I opened up the bulkhead behind the baggage compartment to confirm the wires were still in place.  I then swapped the left and right wires from the power supply to the strobes.  The right side still did not work, thus confirming the Xenon flash tube is the problem, or the wiring. 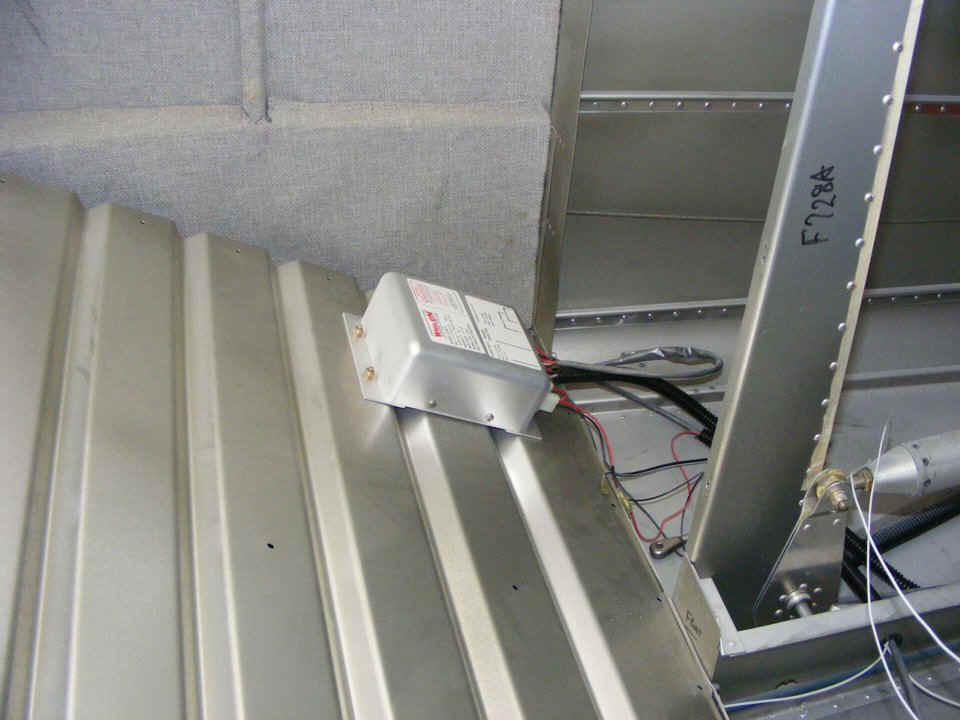 I mentioned to another pilot that I had a dead Whelen strobe light.  He said he had one he would not be using as he had purchased modern LED strobes.  He reached into his parts cabinet and pulled out a Whelen box with a new unit inside that had never been used.  I noticed the white powder on my old strobe had coated the inside of the clear glass lens that protects the strobe tube.  The powder was easily removed with just my dry finger.  I had the new strobe installed and checked out in short order. 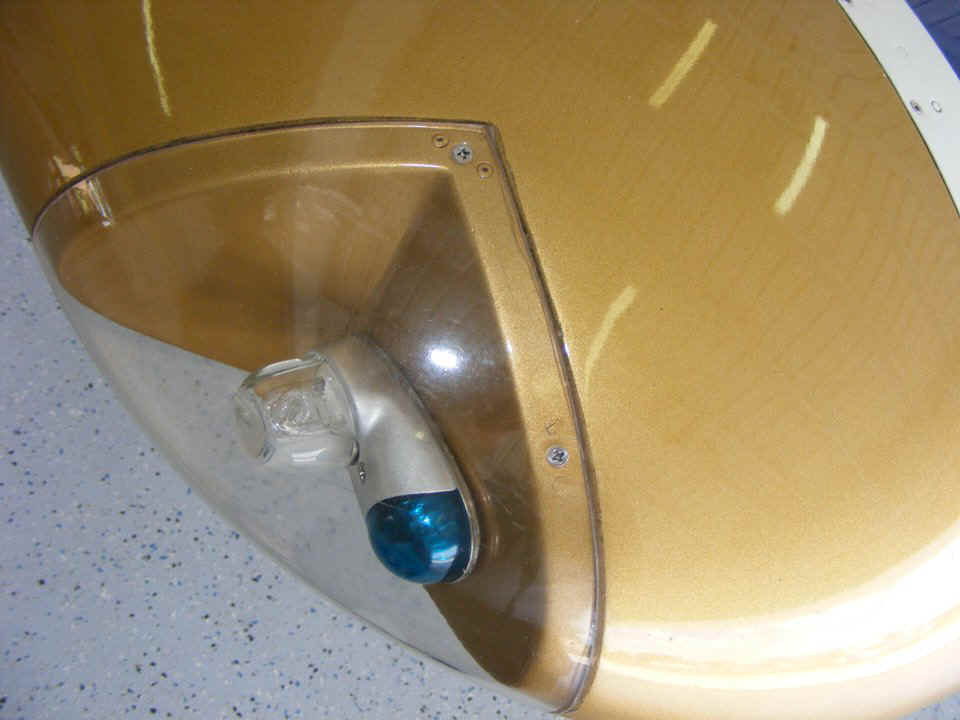 The strobe light on the LEFT wing has the same white powder as seen below after 10 years of use.  I opened this one up and cleaned the white powder out to get maximum light output from both strobes. 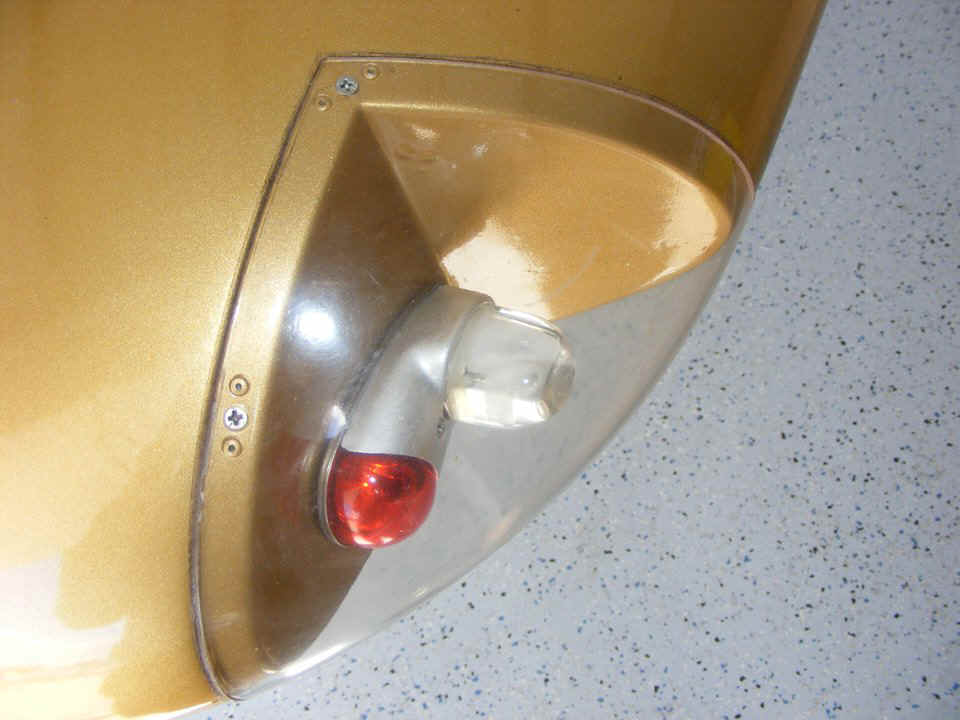 The only thing left to do today was to put back the baggage bulkhead and sound padding that covers it. 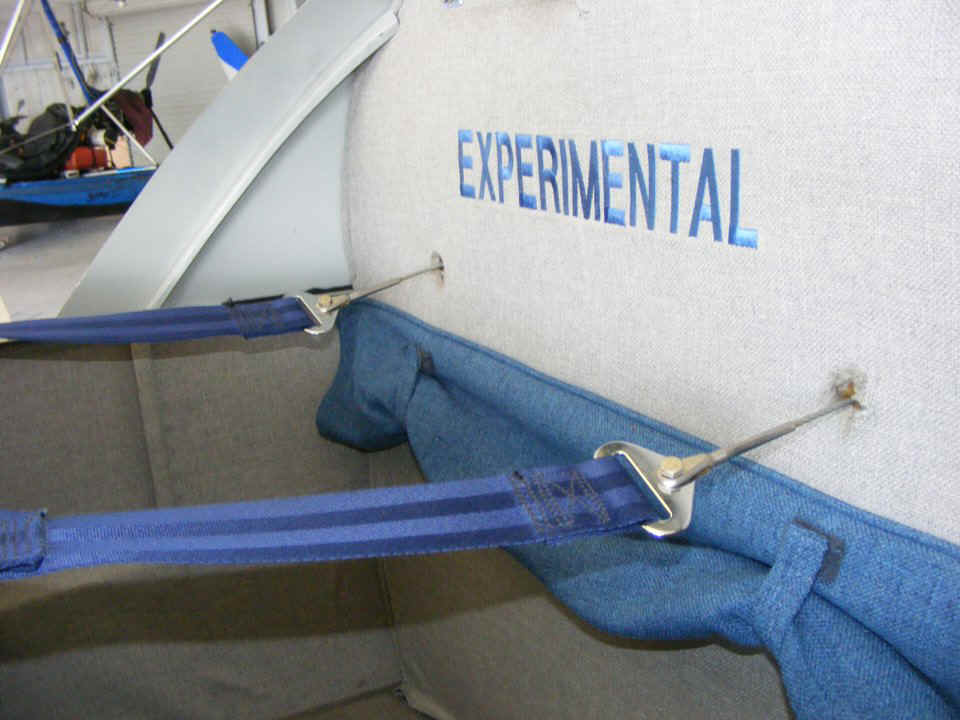 No flying today for me and the Enterprise.  The weather was good with a strong ocean breeze from the East.  This is Easter weekend where some companies had Good Friday as a holiday.  As for my company day job, we get one day for "Spring Break" on the Monday after Easter Sunday.  I will probably go to the airport to clean up the bugs and dust on the airplane.

April 6, 2015:  Monday and a day off gets me to the airport as planned to clean the Enterprise.  I pulled out my creeper and my roller seat to get down and personal with the airplane.  The underside had that neglected look that has been rectified with some elbow grease.  The bugs were banished along with most of the dust, etc. 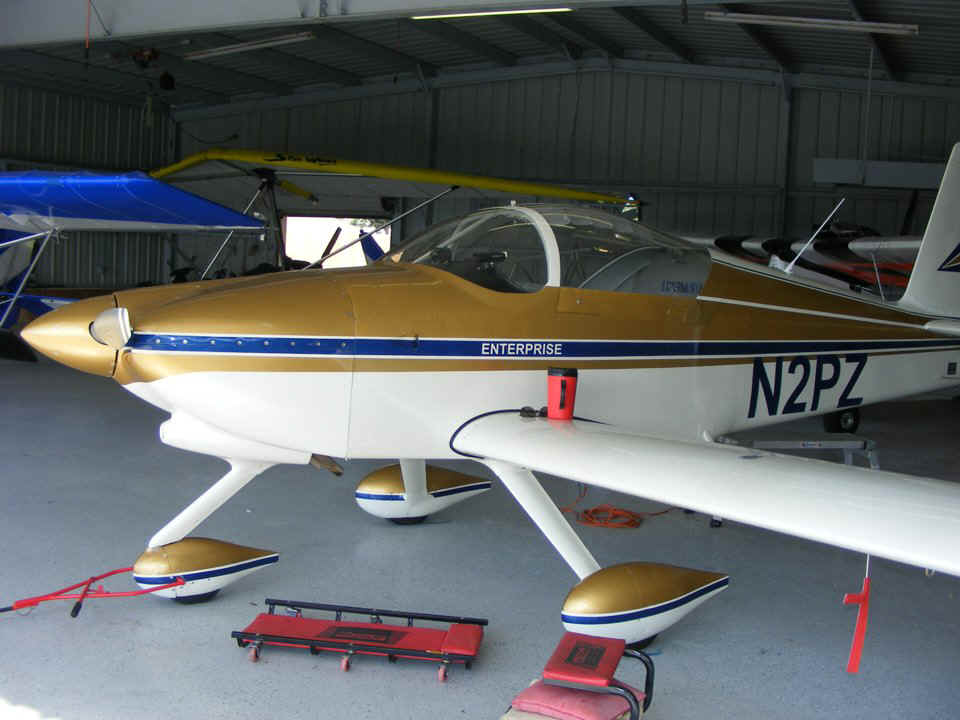 I got out the step up platform to reach the top of the tail and also cleaned the VOR antenna rods, the ELT and COMM antennas, and the transponder and marker beacon antennas when I was crawing on my creeper working on the underside.  I also cleaned away some old adhesive where I had closed up the size of the hinge openings while I was standing at the back of the elevator. 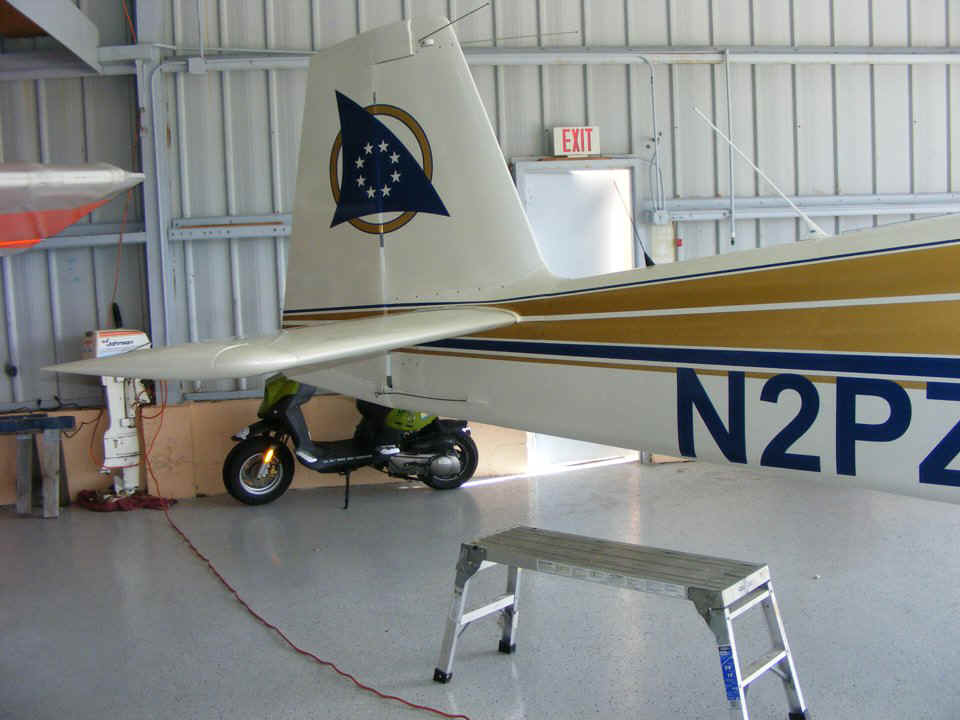 It was a quiet day for my day job with only two phone calls easily handled without a need for my computer, even from the top of that stand seen in this photo.   The next goal is to get the inside wall pockets put back where they belong with some contact cement in the cabin.