January 31, 2015:  I wanted to top of the fuel tanks after the recent flight down to Sebring and back.  The flight today was under the Orlando Class B airspace between the old Orlando Airport knows as Herndon (KORL) and the Sanford Class C (KSFB) which is the north end of the Orlando Class B area.   This is the same route I flew a couple of weeks ago, but this time the end of the flight is at the Orlando-Apopka Airport (X04) where the red track turned north over a fog bound airport.  The weather was severe clear over there today, but a bit hazy on the East side where the map indicates all those tall towers grouped together. 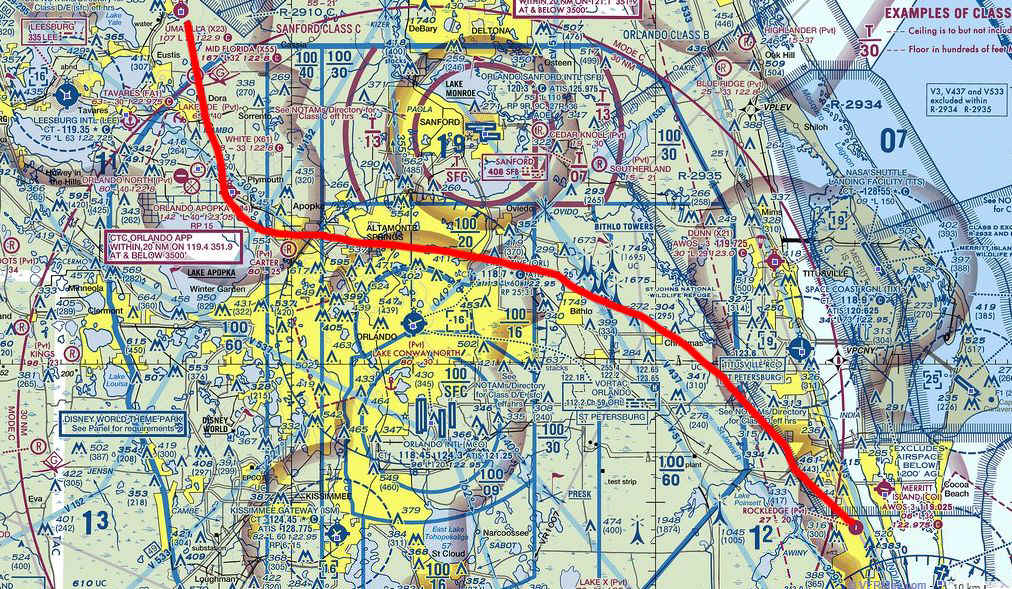 This map segment shows my GPS ground track for today's flight.  The aerial photos taken today were all near Bithlo, the location of the tall towers. 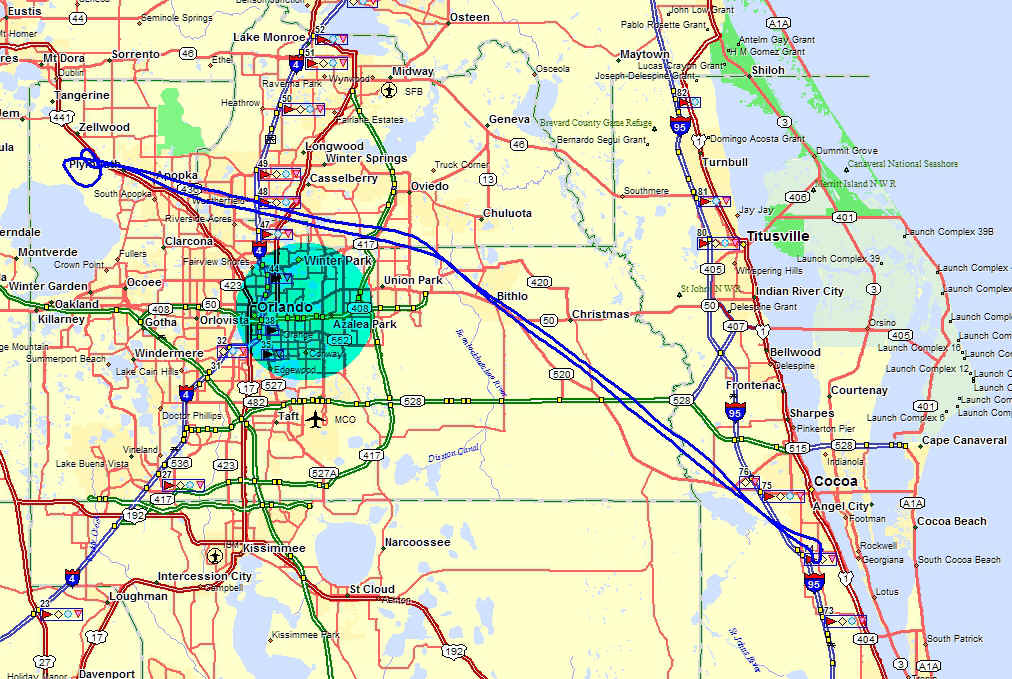 The Orlando Herndon Class D airspace is marked in this map that is zoomed in closer with more street details. 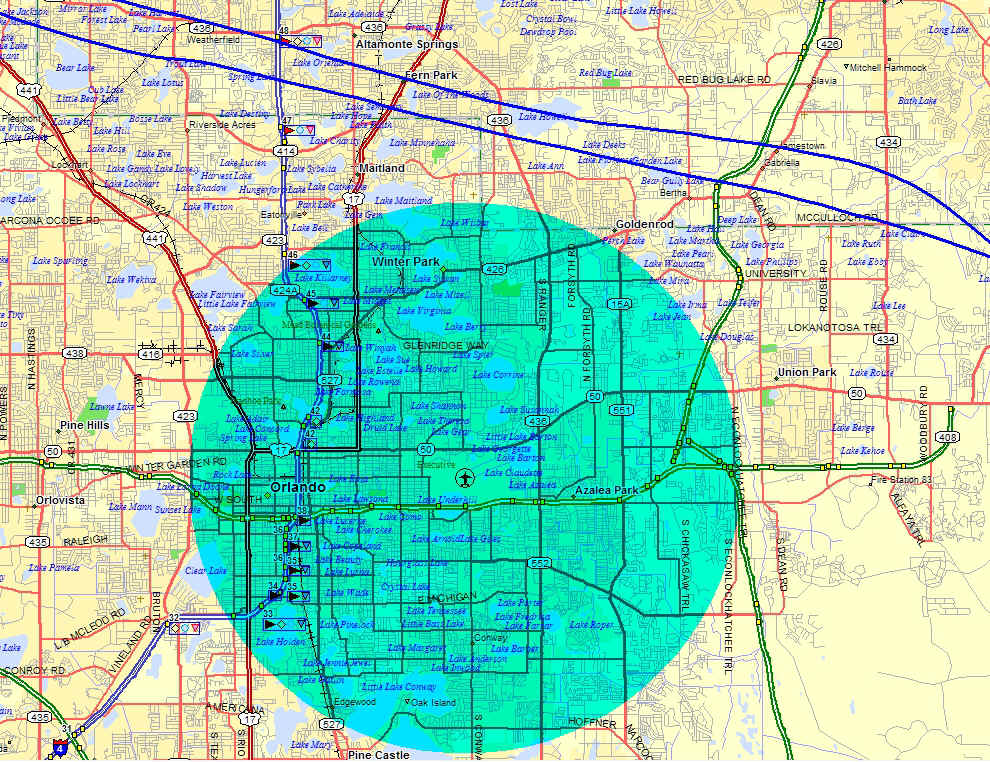 I tried the Canon digital SLR camera and the results in the air were not what I had hoped for as you can see here as I passed to the south and we clear of the tall towers I mentioned above.  The focus was not sharp.  The air was unstable below these clouds at the 1,500 feet path I was flying toward the northwest.  There was a right quartering tail wind from the ocean behind me that blowing at 30 mph.  The autopilot kept me on course, but it could not help with the bumpy air. 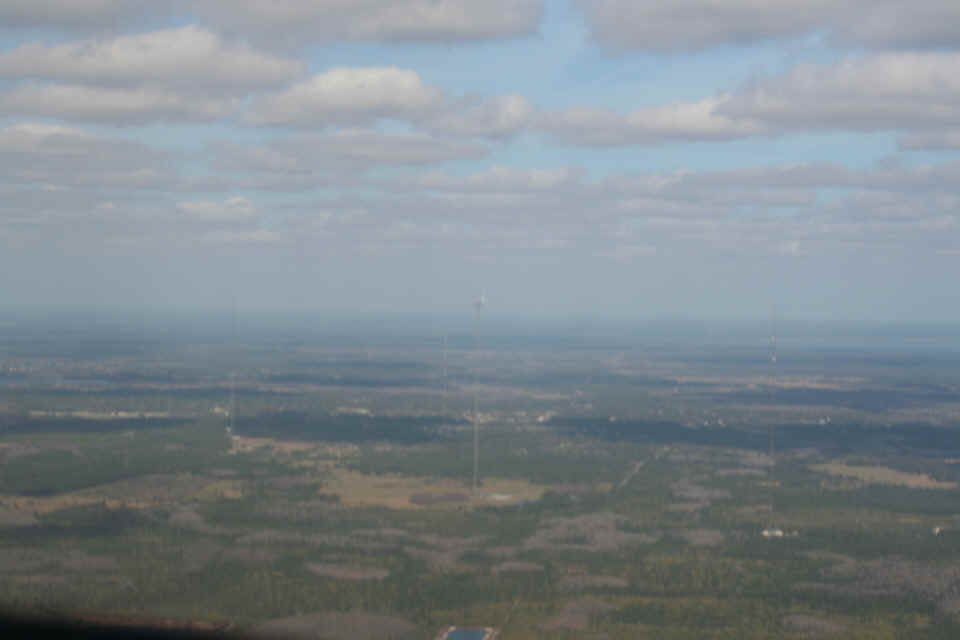 Here is the view on the other side of the airplane looking south at a power plant east of Orlando.  This one was also less than perfect.  I will have to keep using my Fuji F700 for in-flight photos. 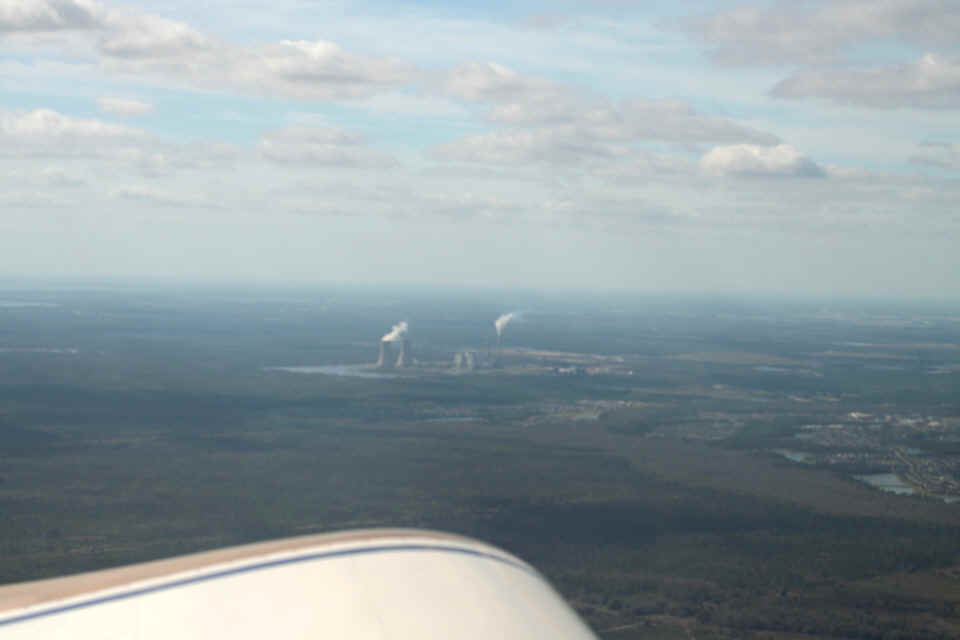 Here is the view as I cross Florida state route 50 looking west at Colonial Drive which heads for the center of Orlando.  This is the last of the in-flight photos looking outside for today. 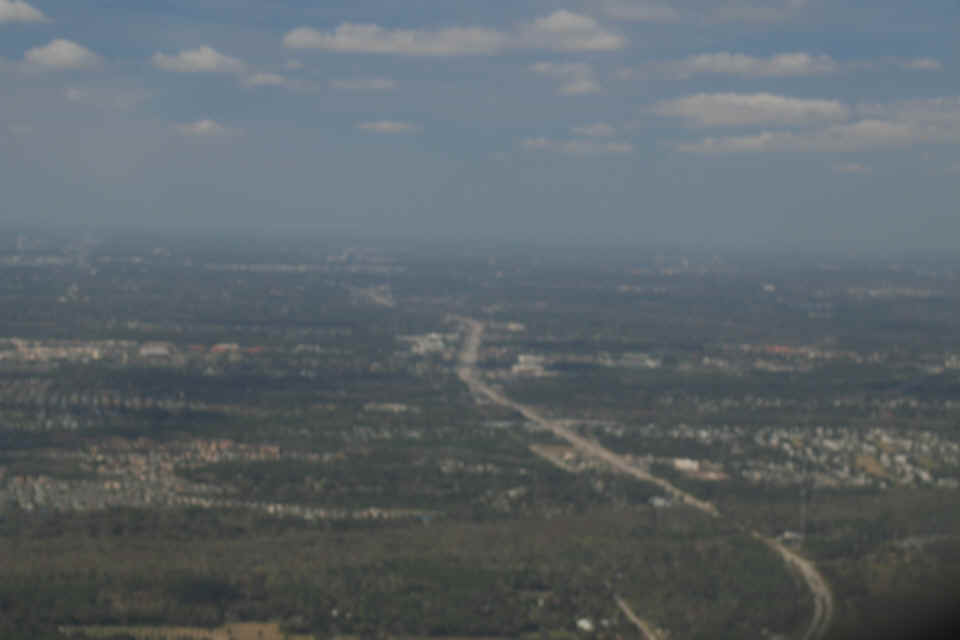 On the ground at Apopka, I tried the camera and optimized the polarizing filter looking toward the sun.  It was not good lighting for details and shadows. 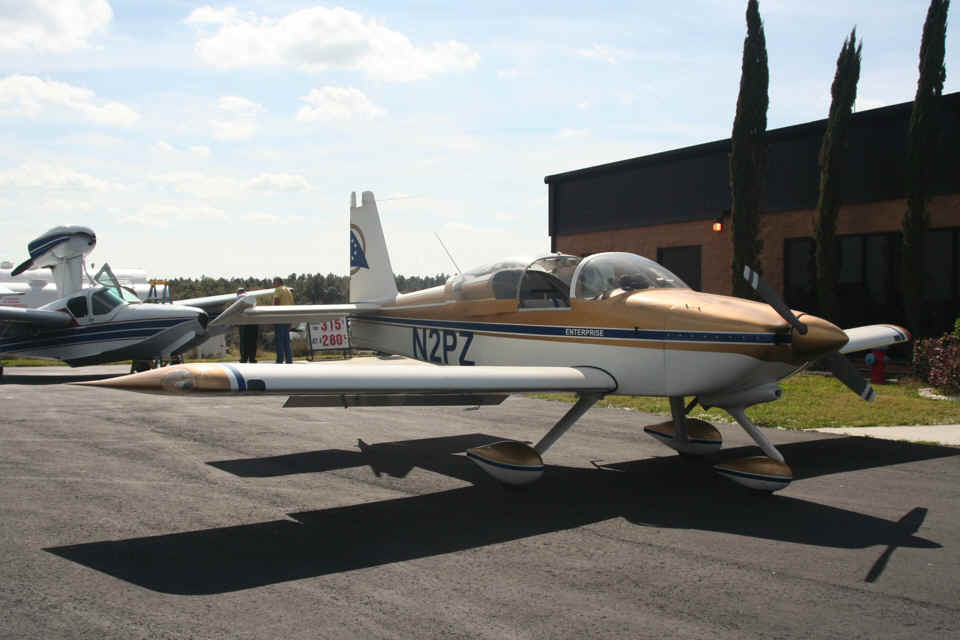 Things get a bit better from a different camera angle.  I can see I need to work more with the depth of field settings to use this camera effectively. 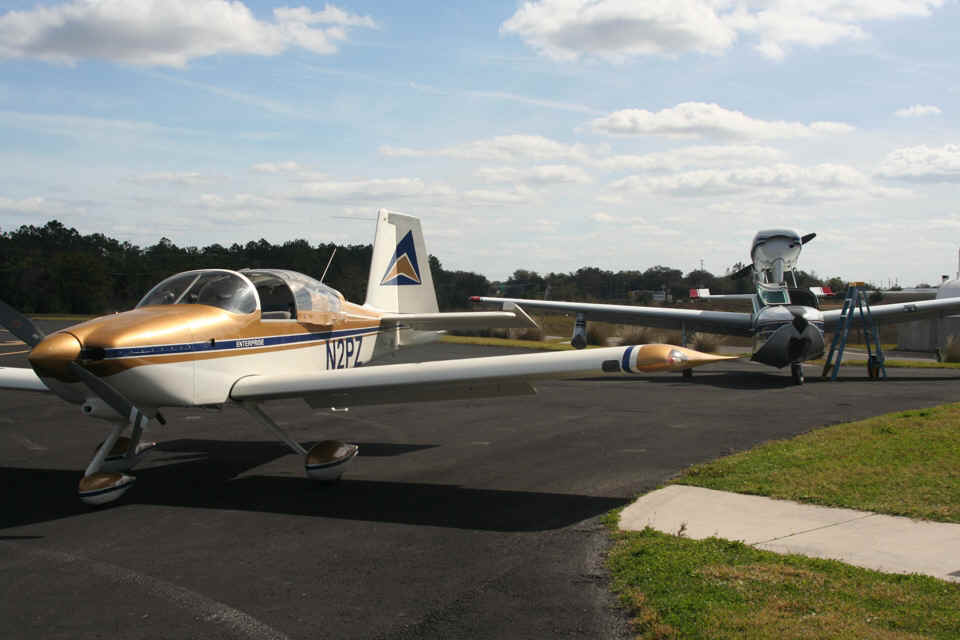 The Apopka airport had major improvements a few years ago.  This is my first time to bring my airplane here.  I stopped here in my car back in the 1990's and it was much more primitive.  There is a taxiway and a number of ramps between modern hangars that are left of my photo.  The wind sock is visible at mid field.   US Highway 441 is parallel to the runway just east of the airport fence.   There is an airplane at the north end of the taxiway doing an engine runup before takeoff. 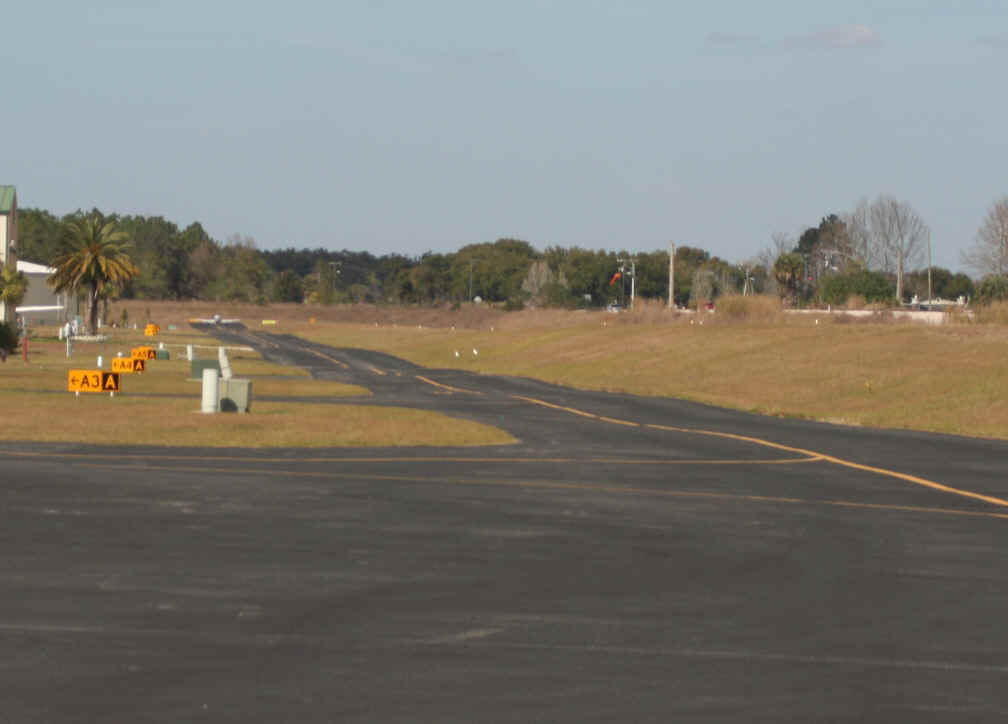 The price for AVGAS was $3;15 per gallon, with jet fuel at $2.80.  These prices remind me when I started flying Enterprise in the summer of 2005.  The two pilots getting fuel for Lake Buccaneer were asking the usual questions about my RV-9A.   How long did it take to build it, what is the engine size and horse power, top speed, rate of fuel burn in cruise flight, maximum range, etc. 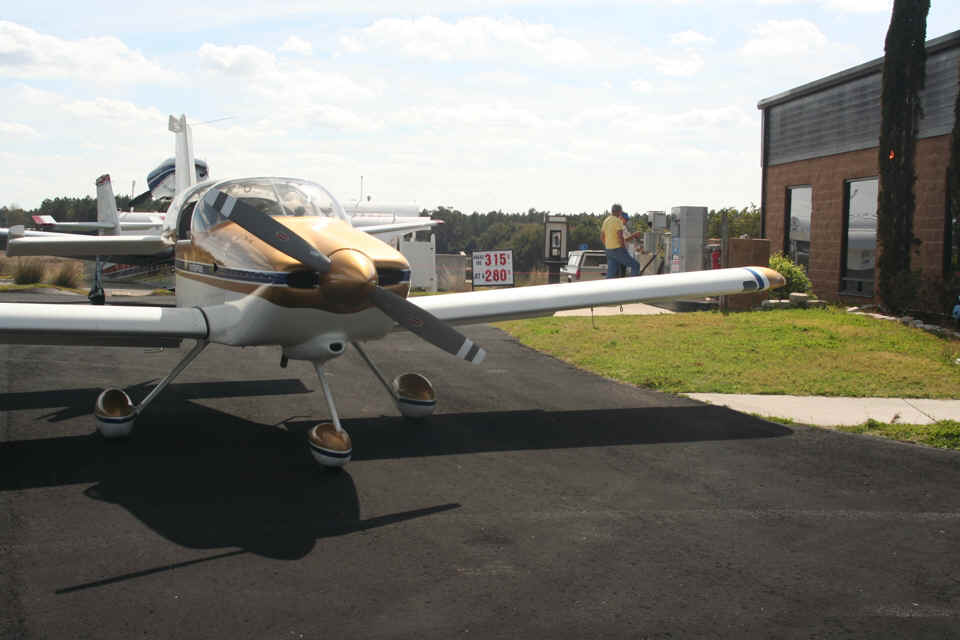 This GPS ground track shows the arrival and departure from X04.  The airport pattern is on the west side of the field away from the town of Apopka.  When I departed, my turn was toward Lake Apopka as I climbed above pattern altitude.   Another airplane was inbound from the north and I wanted to give him extra room. 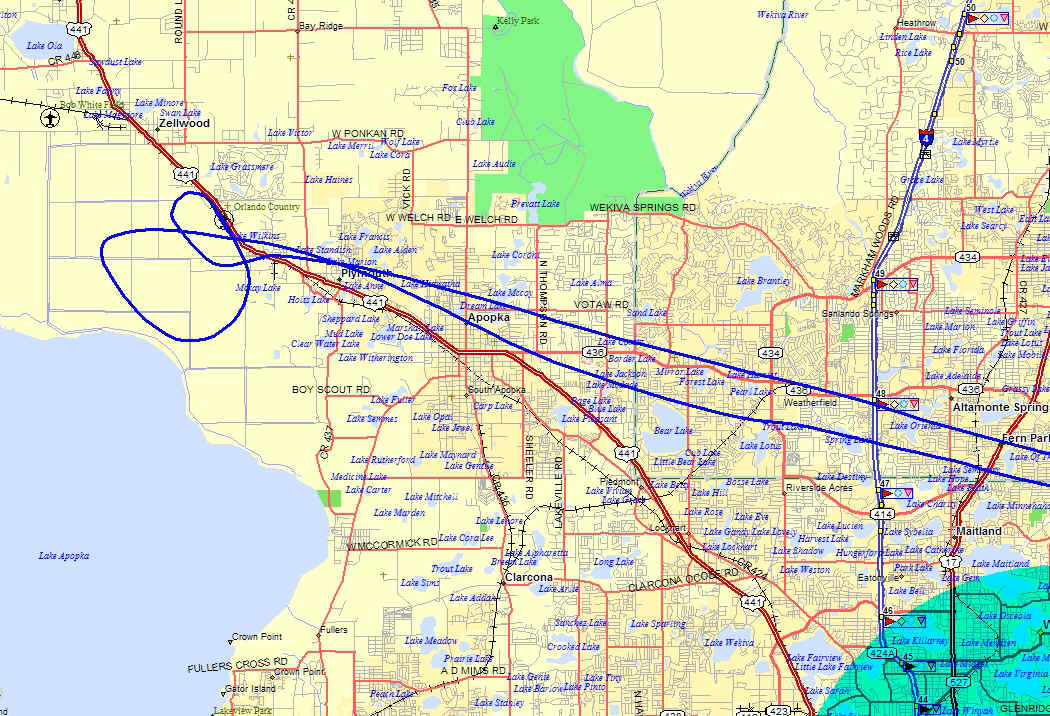 The flight back home had lower speeds for winds aloft at about 8 mph cross wind when I took this photo inside. 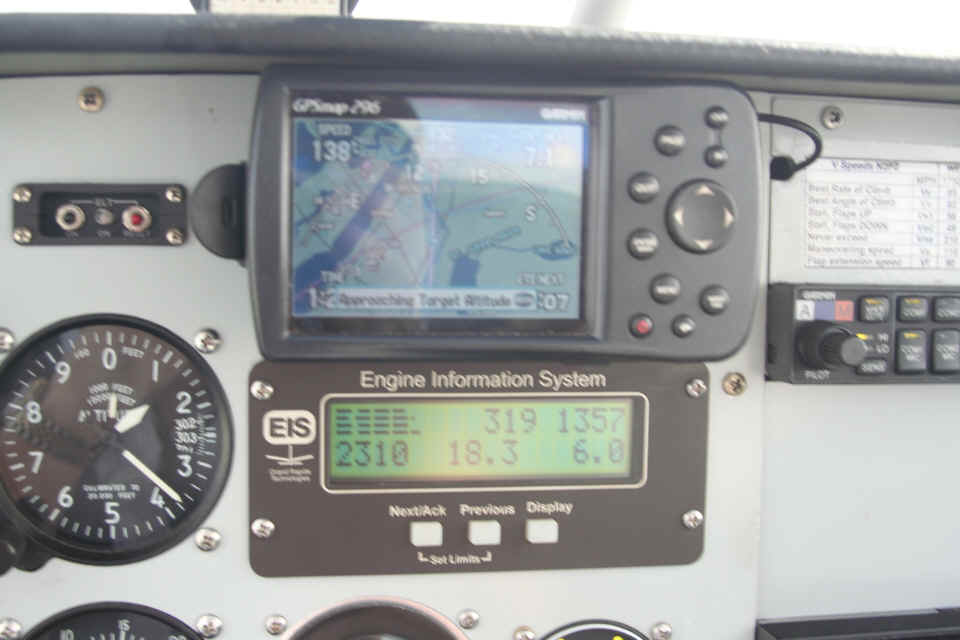 The takeoff from Rockledge was to the north with the cross winds at 1500 feet measuring 30 MPH as I departed to the northwest.  I saw a Cessna 172 above and to my left as I crossed Interstate 95 heading toward Orlando. I listened to Orlando Approach on 119.4 MHz for most of the flight in both directions.  I saw a low-wing Piper coming out of Sanford Airport heading southeast around the Class B when I was looking down at him from 1,700 feet MSL.  On the way back home, I heard approach advise a medical helicopter of my position and direction of flight, and I noticed a Cessna down low of the trees heading for Titusville Executive Airport (KTIX). 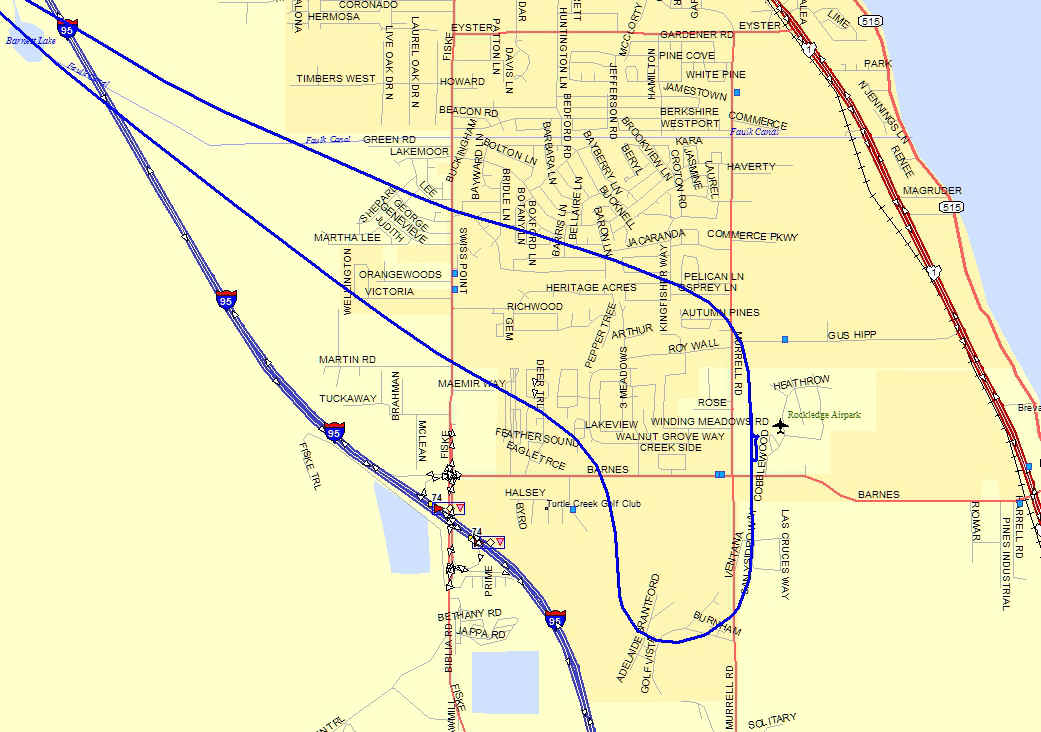 The winds aloft as I returned had settled down to about 8 mph from the northeast as I approached for a landing on Runway 36.  The total flight time today was 1.3 hours added to the Hobbs meter for a total of 368.6 hours for my airplane since new.