December 28, 2014: This photo shows Lake Harney at a distance of about 10 miles.  It is one of a chain of small lakes on the Saint John's River that flows north to Jacksonville before turning toward the Atlantic Ocean.   The headwaters of the river are just a few miles west of my home in Palm Bay, Florida. 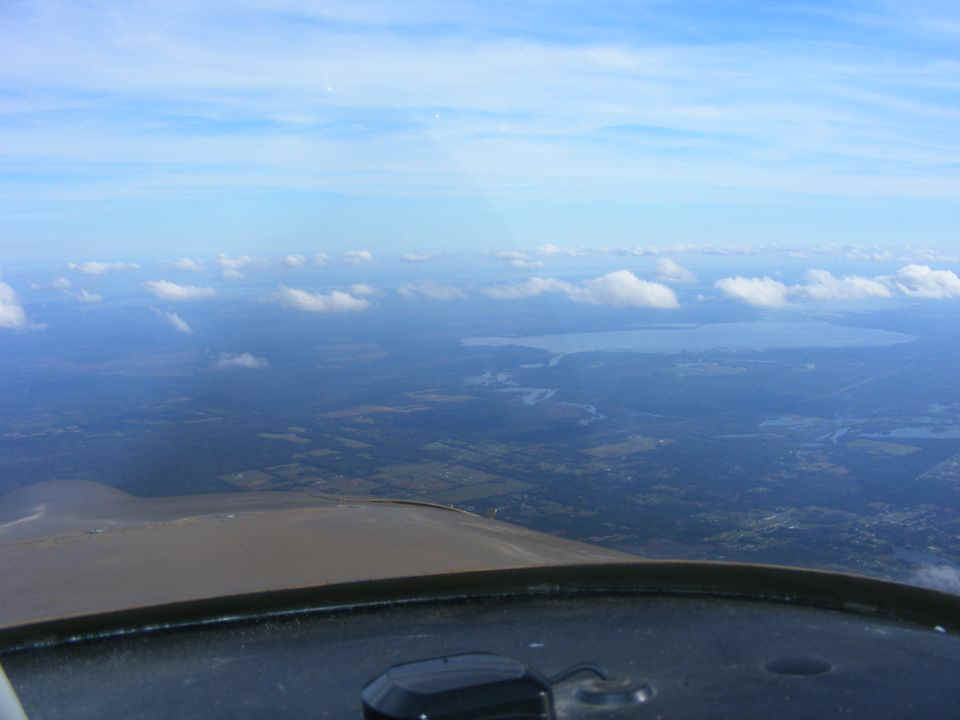 Here is another view of the lake less than 2 minutes later when the ground speed is around 170 MPH at a height of 5,500 MSL with part of that speed being a quartering tail wind estimated at 18 MPH by my Dynon D-10A air speed measurements combined with the GPS ground speed. 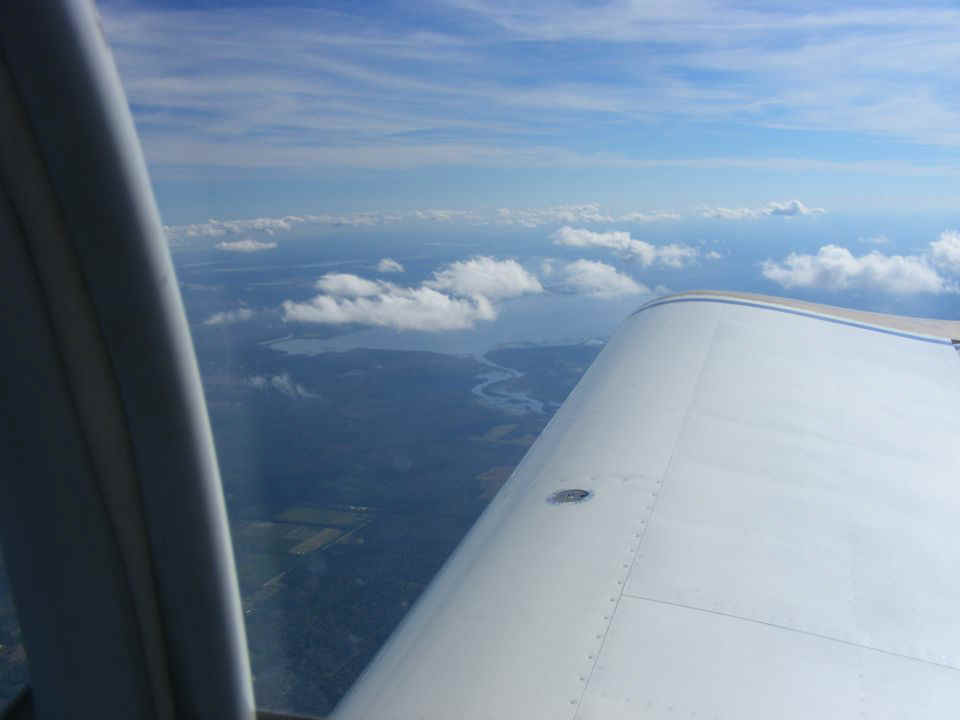 I turned southeast when I passed the northeast corner of the Orlando Class B airspace.  The tail wind advantage was no longer any help as it was at a right angle to my course.  I was heading down US 1 next to the Indian river when I thought about trying to get the tour of the Shuttle Landing Strip, all 15,000 feet of it.  I made a call to their control tower with no results, then called the Cape Canaveral Air Force Station tower and made my request.  I mentioned that I had done this a few years ago and repeated the requirements of no flight EAST of the runway center line and now lower than 500 feet.  The controller gave me clearance for the flyby. 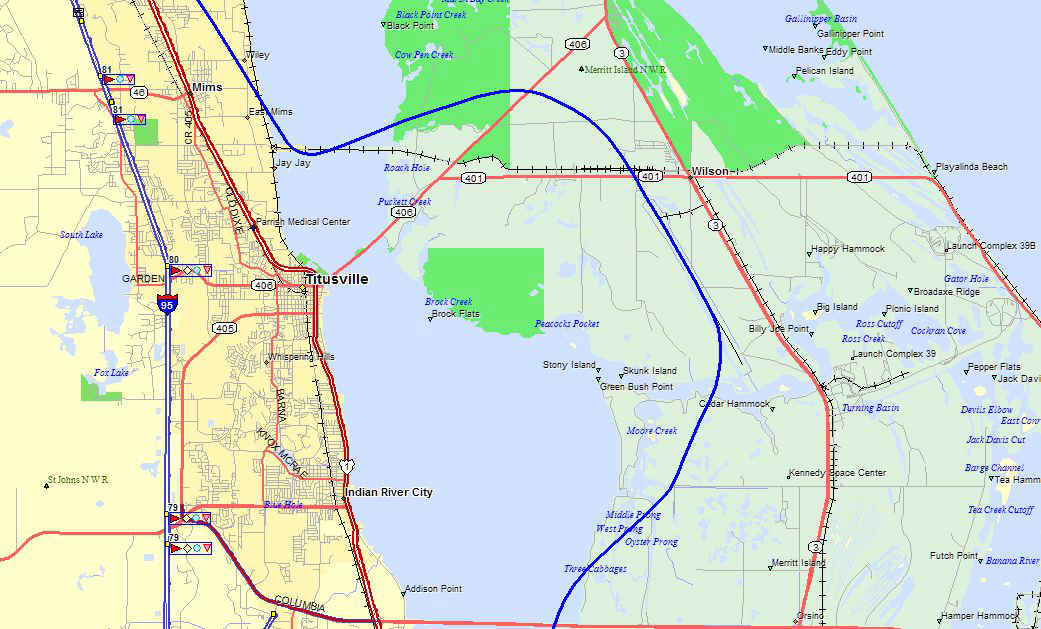 Here is the view as I turned toward the shuttle runway.  The Indian River Lagoon is out of sight below my airplane.  I now have the wind at my back and the ground speed jumps from 141 MPH cruising down the river to 199 MPH after the turn to the EAST and beginning a dive toward the runway to get the same view the astronauts see on approach for a landing. 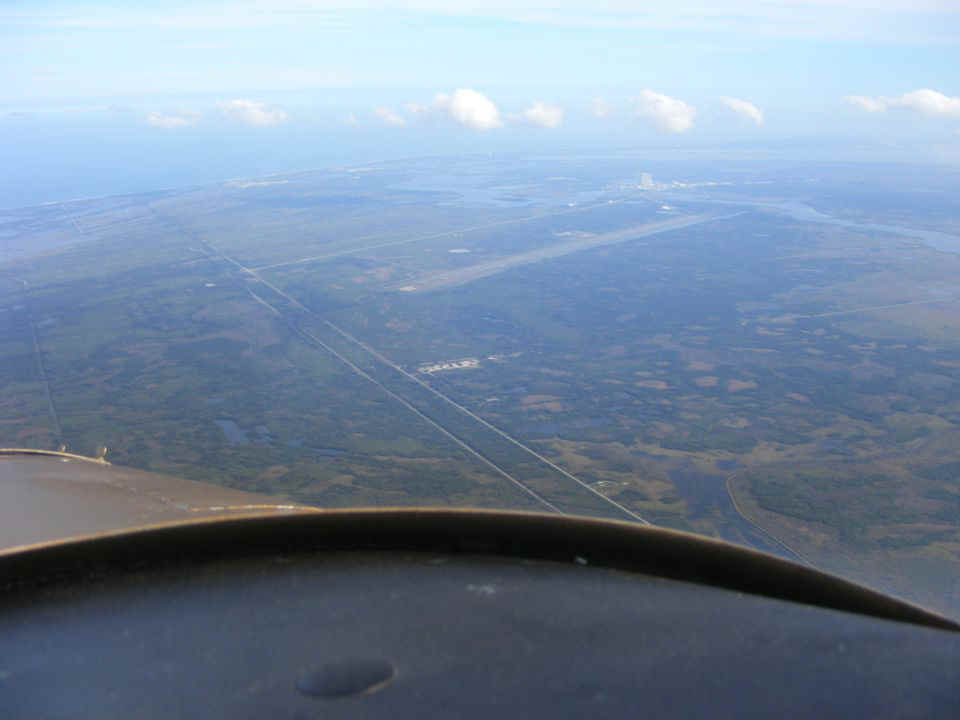 I am keeping an eye on the indicated air speed and my altitude as I dive from 5,500 feet to 3,484 feet in 75 seconds according to my GPS data.  I am beginning to turn to the runway heading.  There is a reflection of the support bar on the inside of the windshield. 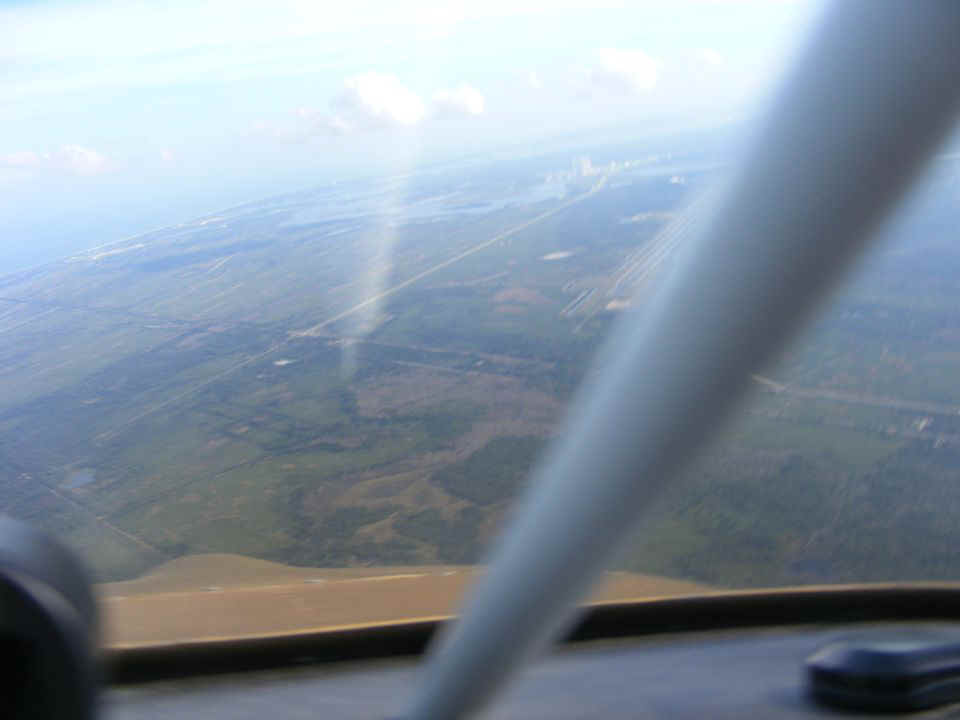 I am down to about 3,000 feet in this turn as the runway is now in full view along with the reflection from the windshield support bar. 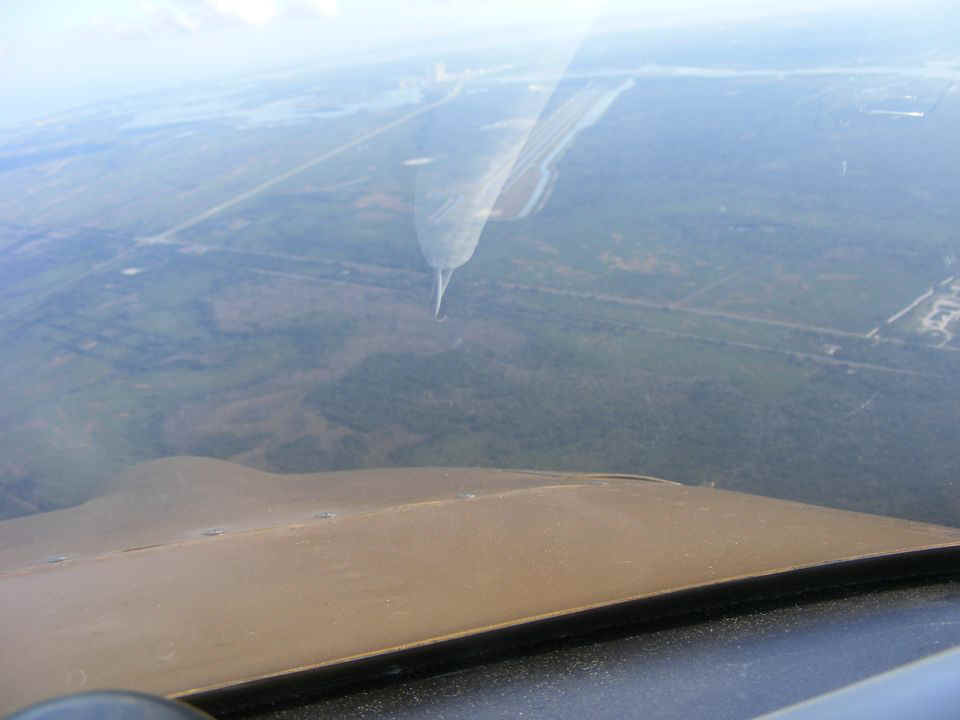 At about 2,500 feet, the ground speed is now near 180 MPH.  The reflection is still in the window in my field of view. 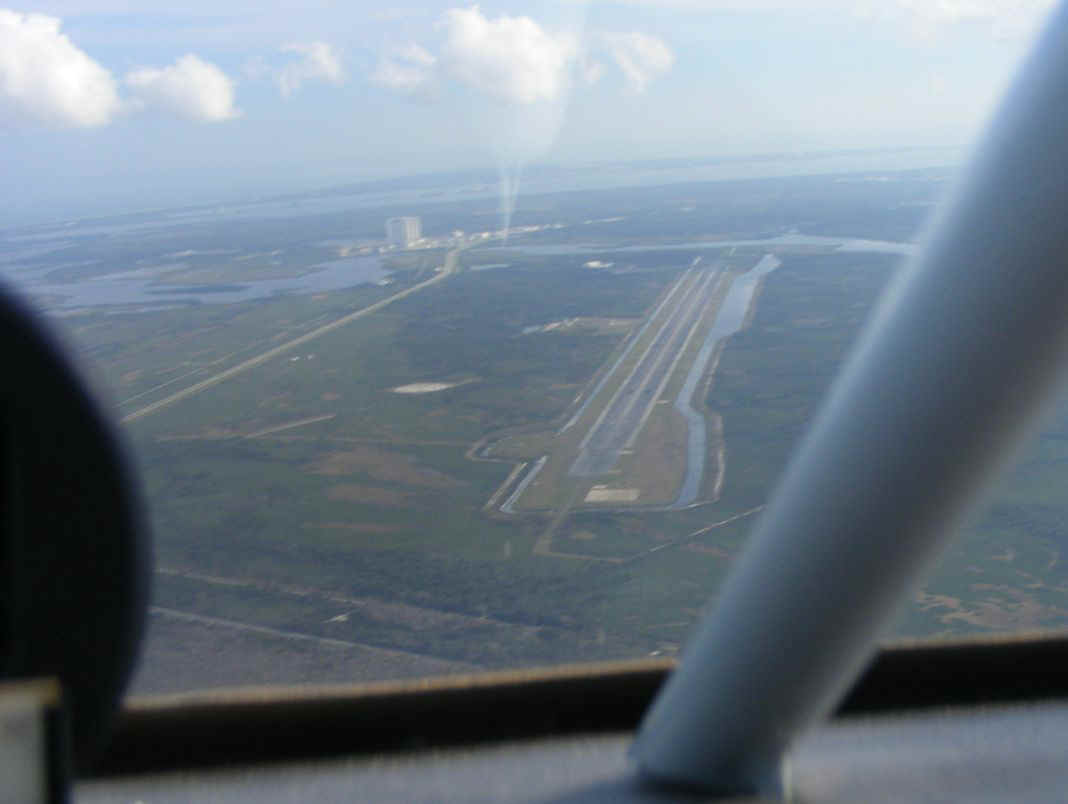 The runway alignment occurs when I am at 1,500 feet MSL and descending at 168 MPH. 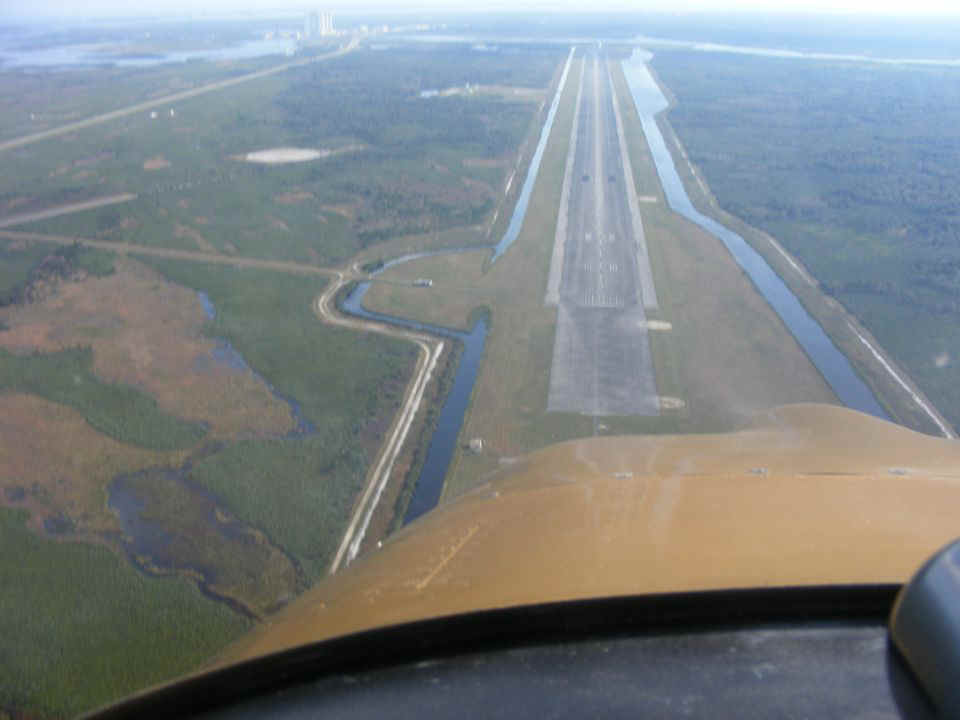 The speed is 168 MPH as I level off at 598 feet and the VAB is coming up.   I point the camera the best I can since I am flying very fast and I want to be sure I stay on the runway center line until I have to turn back to the mainland.  I convert my airspeed to altitude and continue climbing at 125 MPH until I reach the area near Titusville Executive Airport and I am cruising at 150 MPH again. 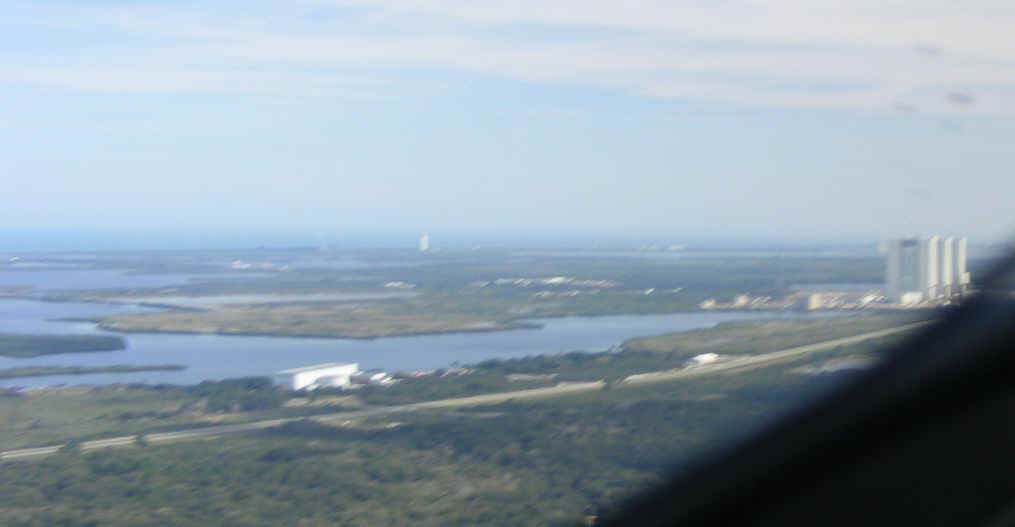 By the time I reach the town of Cocoa, I am letting my speed bleed off while descending from 2000 feet to 1300 feet just north of the Rockledge Airport.  I fly a tight right hand circle to get down to just under 500 feet and under 100 MPH.  I touch down on runway 18 at 2:32 PM and the airplane is parked on the ramp at 2:34 PM when the GPS power and engine are shut off in front of the hangar. 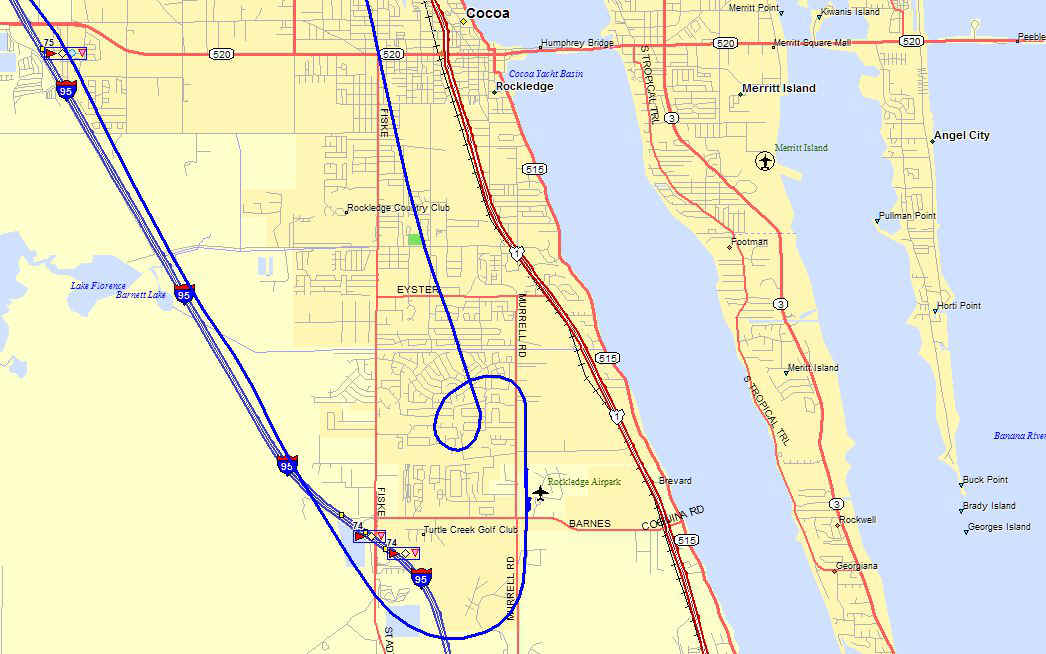 The lessons learned today is always allow some extra time when ground fog is expected at my destination.  When taking the shuttle landing strip tour, approach from the south end of runway 33 to put the sun behind you for better photos.  Take along a friend who is a good photographer to get good pictures.  Fly slower to get more photos.  The only other time I flew the shuttle runway was in a Cessna 172 at 125 MPH and I did have a friend in the right seat as we flew south to north on runway 33.   The return trip from Umatilla was 96.3 miles with the detour to the shuttle landing strip and the circle to land at Rockledge.  The Hobbs meter now indicates a total of 365.4 hours from the 2.1 hours added today.