August 3, 2014:  Sunday and it rained again.   I noticed nearby rain showers when I was driving up to the Rockledge Airport this morning.  It was 90 degrees when I got out of the car and opened the hangar.  I got the back door open and the side door to get some air from the breeze that was blowing in from the ocean.  It was muggy and I figured I would stay on the ground instead of getting up there and wishing I was here instead.  I cleaned the airplane from the last flight and was pleasantly surprised by Bill and his story of upcoming renovations to the hangar.  The roof will get a fresh coat of sealant and the inside ceiling and walls will be steam cleaned before repainting.  I showed Bill some places where rain leaked inside during the rain showers today.  This was not like the heavy rain that happened when I was here working a few weeks ago. 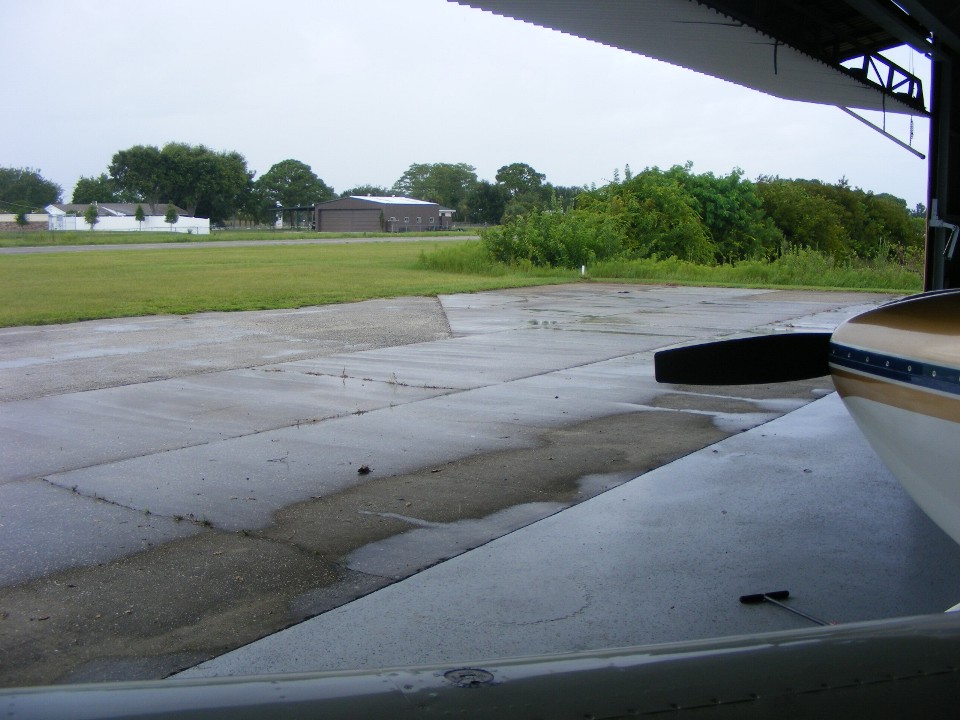 This was the week that AirVenture was held at the Oshkosh, Wisconsin airport.   I stayed home to work my day job in my office and read some of the emails with daily reports from the show at the end of each day.  I was interested in the new ADS-B products.  The comments were about the prices coming down as more companies introduce competitive ADS-B products.  I will have to update my radio stack before 2020 to meet the FAA mandate or I will not be able to land at any Class C airports or fly through Class B airspace, which I usually avoid anyway.  The good thing about ADS-B is the weather and air traffic information that can be displayed in the cockpit.

No hours were added to the Hobbs meter today.  I did help Bill with information on an electrical problem he has and where the problem may be.

September 7, 2014:  Time for an update about the weather and not flying.  I need to get back in the habit of updating these web pages on Sundays, like today since it is raining outside.   Yesterday was a better day with overcast skies, but the layer was high enough there were folks up there flying in the heat and humidity.  I went up to the Rockledge Airport with the intent to get some stick time myself.  Did you notice the word "intent" in that previous thought?  It is related to words from the sentence before that one, "heat and humidity".  I sat in the air-conditioned office and talked with Bill about his project in the hangar and some stories about Air France 447 and the "Gimli Glider", an Air Canada Boeing 767 that ran out of fuel and made an emergency landing a number of years ago.

I have been working on projects around the house like a leak from the water filter under the refrigerator that wiped out the carpet and padding in the living room.   The owners of the house I lease have decided to invest in tile to replace the carpet to add to the value of the house.  I have documented this stuff for them with some special web pages with photos and descriptions just like I do for my flying experiences for all of you.  Since the owners live out of Florida, the web pages are an easy way to keep them up to date on the work going on here.  The new tile floor is expected to be installed during the week of September 15-19.  Right now the living room has a bare concrete floor and no lingering mildew odor.

My sister has a birthday on Tuesday, September 9th.   I sent out a birthday card Saturday morning that should arrive on her special day.   My day job will take me to Denver for a national trade show during the week of September 22-25.  I hope to see many friends from my 43 years in the cable TV, satellite, and fiber optic communications industry.  I have tickets with Delta Airlines for this trip, opposed to the same show when it was held 2006 in Denver when I flew there in my plane and also attended the Rocky Mountain Fly-in at the Front Range Airport.  If you never read about that trip in 2006, take a look starting on PAGE 213.

September 14, 2014: The weather and my available time have finally permitted me to get back in the air today for a TEST FLIGHT.  I subscribe to AVweb flash newsletters to keep up to date on many things to do with aviation.  Volume 1, Number 37b came to my INBOX on Friday, September 12, 2014.  They have a section called AVweb Classic where they feature older published articles about flying.  The article featured was "Pelican's Perch #19:  Putting It All Together" written by John Deakin and first published on June 30, 1999.  This is a long article about every phase of flight in a general aviation airplane.  He offers practical advice on everything we do from start to finish on a cross-country flight.  For me, the best part was in the section of the article with the heading "Cruisin' Along" where he talks about maximizing fuel economy using techniques used by Charles Lindbergh for his 1927 flight from New York to Paris.  He taught those same techniques to American pilots in World War II in the South Pacific.  It was all centered around exhaust gas temperature (EGT) while setting engine power for cruise flight.  He gives a procedure on how to determine the most efficient way to operate an aircraft engine.

I made up a spread sheet table to collect data per his instructions and went out to fly his procedure this morning.  As it turns out, I have been doing this method already by just balancing my EGT temps on my engine monitor.  He also talks about cylinder head temperatures in his tests.  When I reviewed the numbers, I was doing just fine, although I did try reducing my RPM from my normal 2300 down to 2200 and 2100 to collect data.  Although this was the first test of this type for me and my airplane, it will certainly not be the last.

You can tell my attention to details is derived from my long career doing engineering jobs.  Taking data and comparing results was something I learned to do in the late 1960's in college.  But with all that data completed, all that remained to be done was to just enjoy the ride and do some sight seeing along the Central Florida Atlantic Coastline in Brevard County where I live now.  Here is the flight path for today. 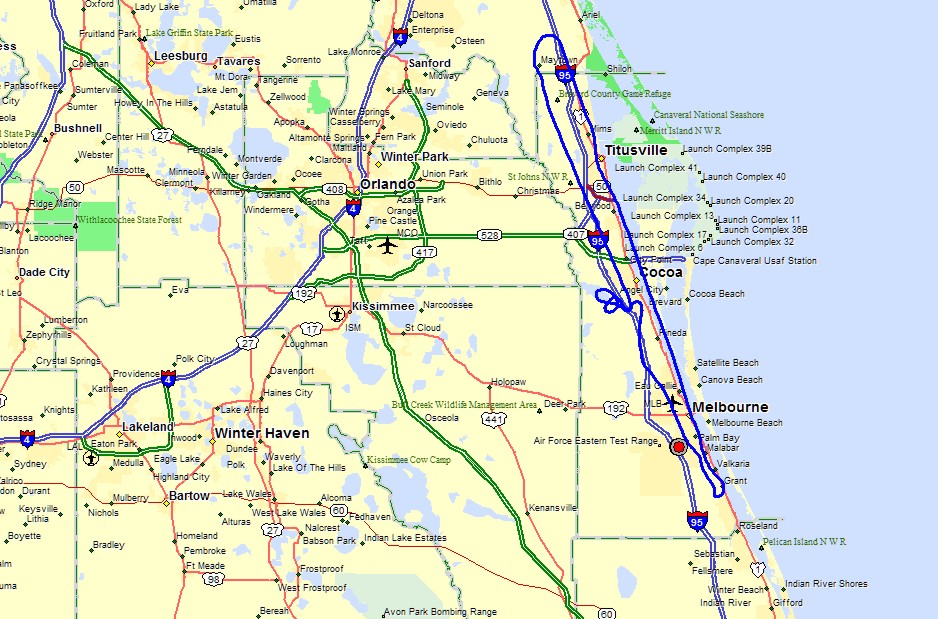 Here are some photos of what was outside during my flight at 11,500 feet above sea level when I was finished collecting data.  Inside that yellow outline is the 15,000-foot runway where the Shuttle usually landed when returning from space missions.   Interstate 95 is running from left to right  heading south below those clouds near the bottom of the photo. 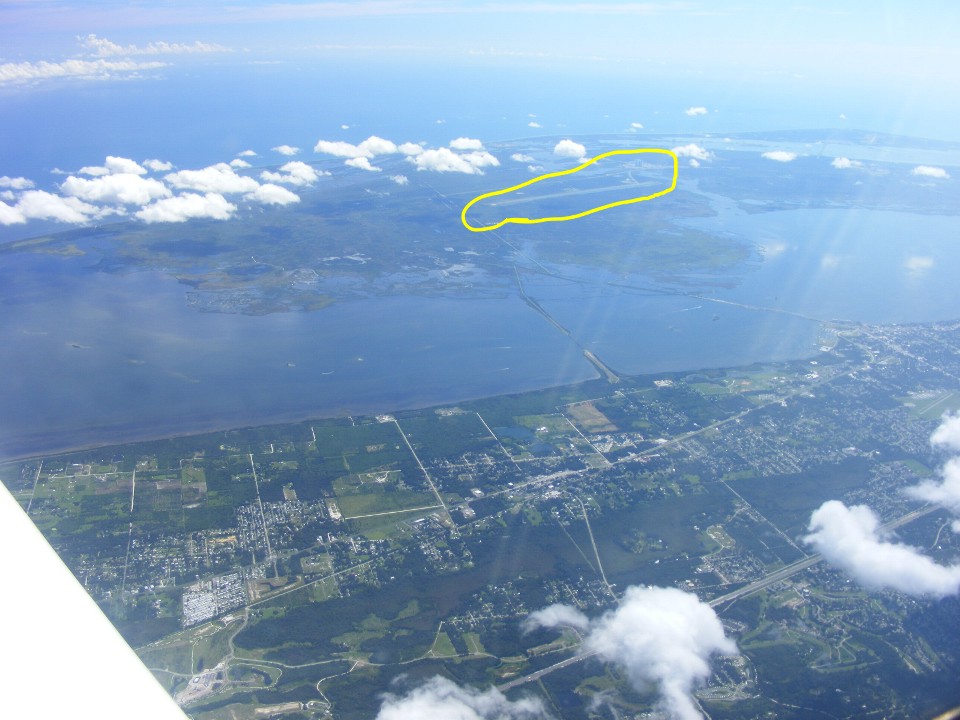 This view looking ahead is familiar from the very first flights I made from Chattanooga to South Florida (Lantana and Stuart Airports).  Every time I pass near the Dunn Airpark, I listen on their frequency and to ask if they have a parachute JUMP PLANE in the air. 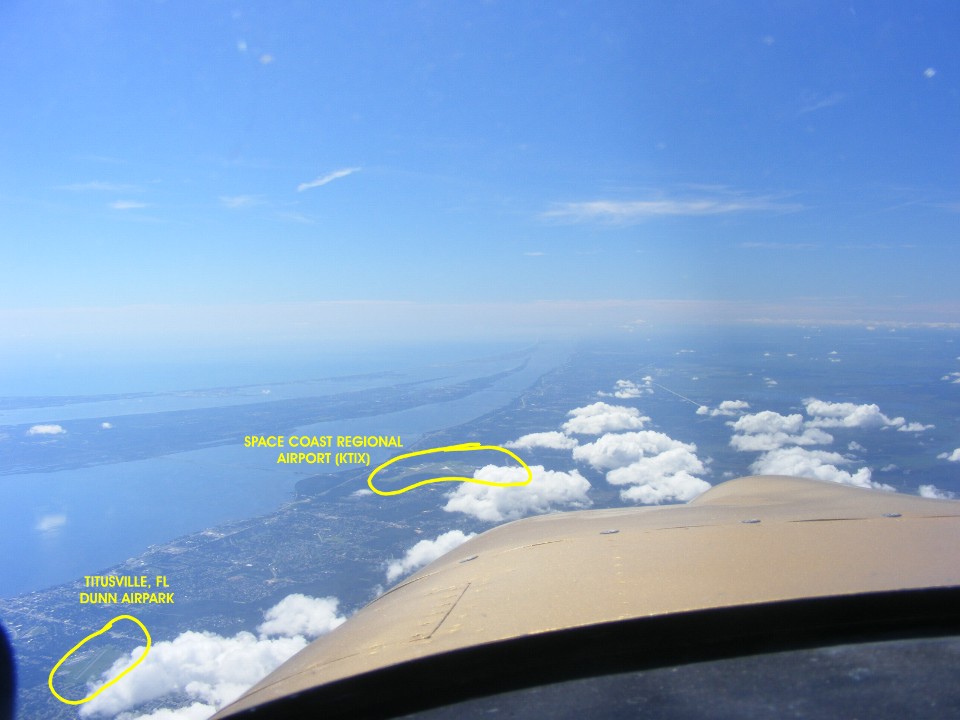 The skies looking west have mostly low clouds rolling in from the Atlantic Coast moisture except in the middle of the peninsula and toward the Gulf Coast of Florida showing higher cloud tops from rising thermals. 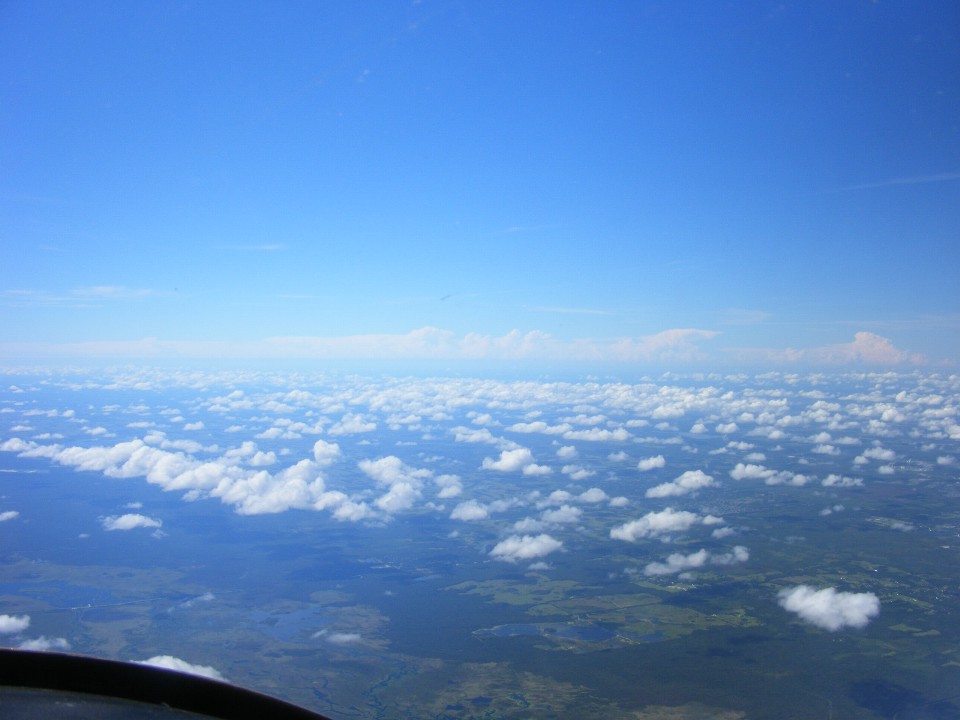 Here is another look down with the camera pointed closer to the airplane.   I have also marked downtown Titusville, Florida. 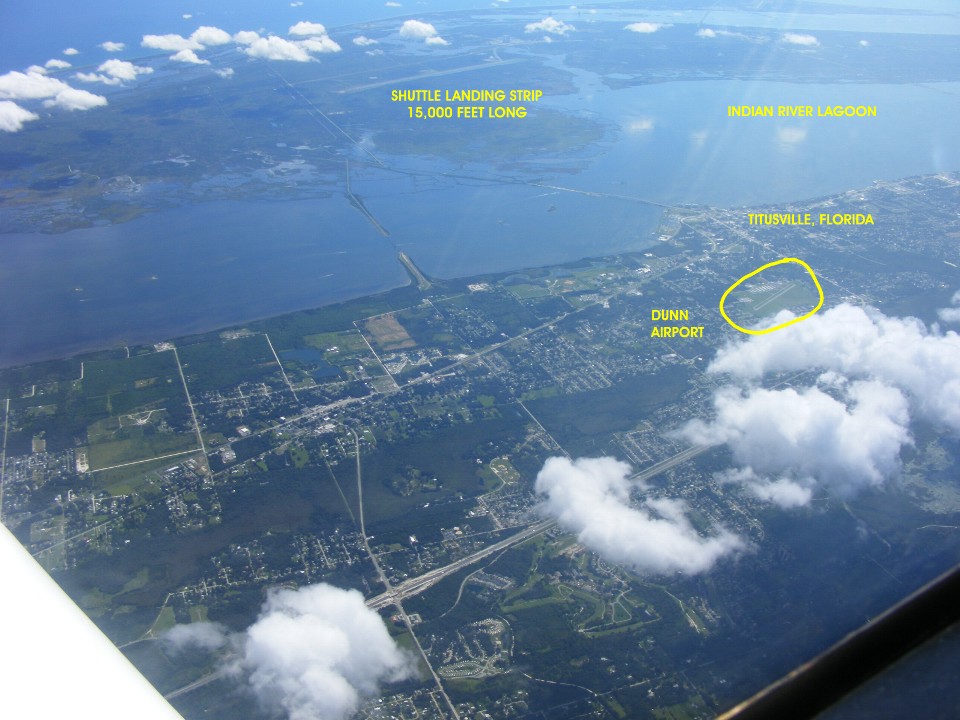 State route 528 comes across from Orlando to Merritt Island and the town of Cocoa Beach on the barrier island at this point.  You can see where I have marked Port Canaveral where there can be four or more cruise ships docked there.  They all enter and leave the harbor usually on high tides. 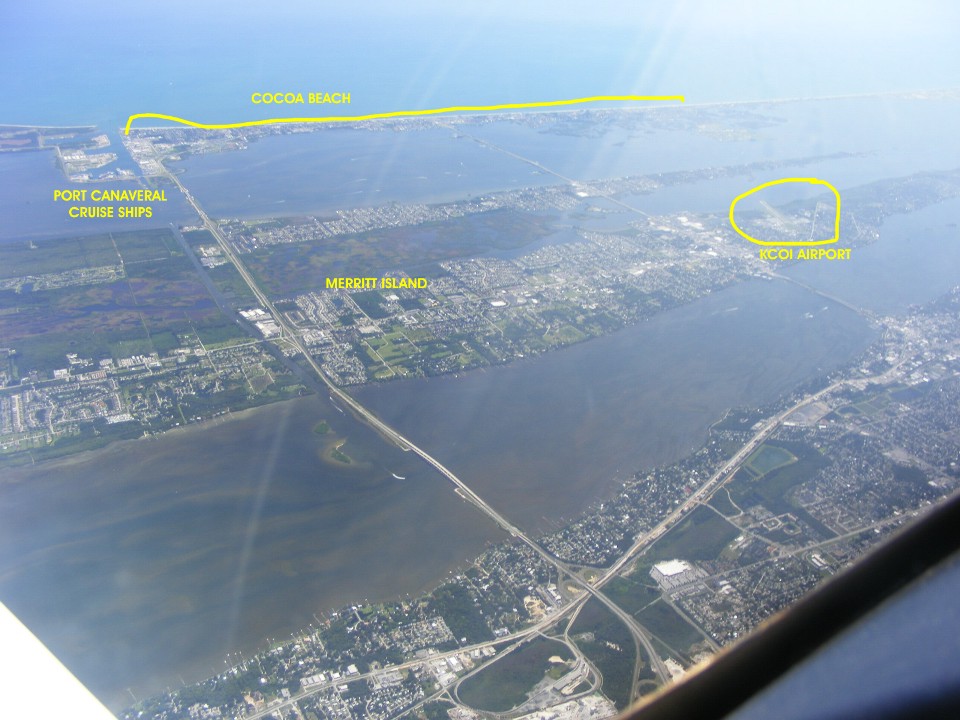 You have seen my photos of Patrick Air Force base in these pages in the past.   I don't usually get high enough to get PAFB and Merritt Island airport in the same photo.  Take notice of how "narrow" Merritt Island becomes toward its south end at the right edge of this photo.  That causeway from the town of Cocoa on the mainland at the bottom right of this photo first crosses the Indian River, then Merritt Island, and finally the Banana River before reaching the town of Cocoa Beach on the barrier island and the Atlantic Ocean beyond the famous beach. 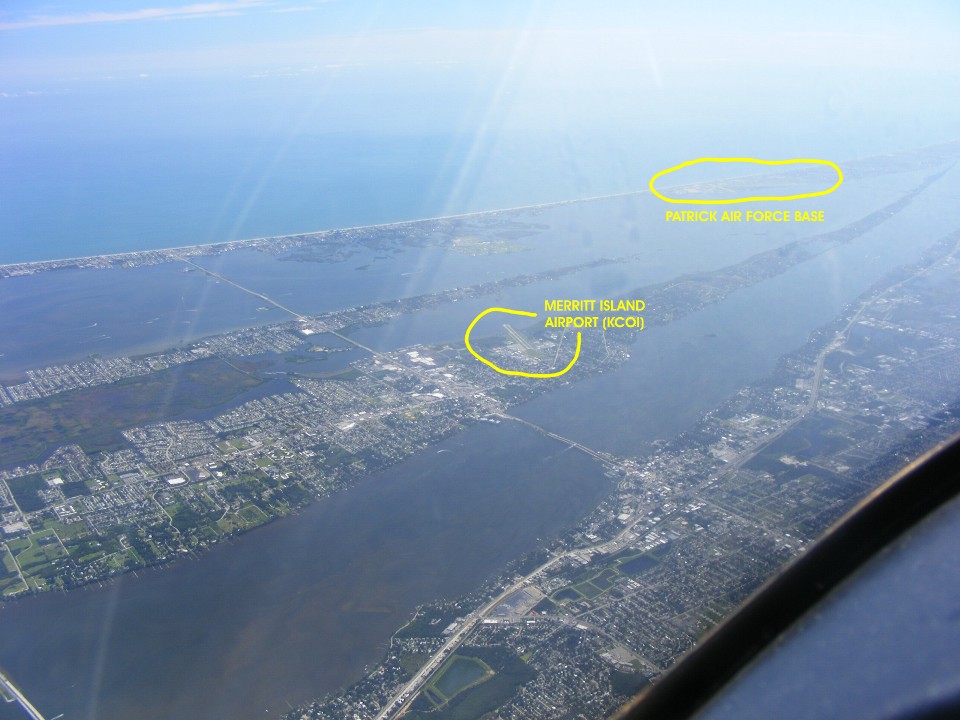 Here is a map with my GPS ground track as I circled down to land back at the Rockledge Airport at the end of today's test flight.  The takeoff this morning was heading south climbing to 3,500 MSL over the Melbourne airport and higher over Valkaria before heading north up to 9,500 feet on autopilot.  I then stabilized the airplane in level flight and started to tune the engine settings and take data during the northbound flight segment that took me along the Indian River.  I climbed up to 10,500 feet and took more data then turned back south with a course for Vero Beach Airport in the GPS when I set my altitude at 11,500 for the last set of data.  I will do this testing again at 12,500 feet and 13,500 feet to see how much the extra lean mixture can improve fuel economy or if the increased angle-of-attack will cause a loss of speed due to extra drag on the airframe even though the air is less dense up there.  From past experience, I usually cruise at 160 MPH true air speed when I am that high. 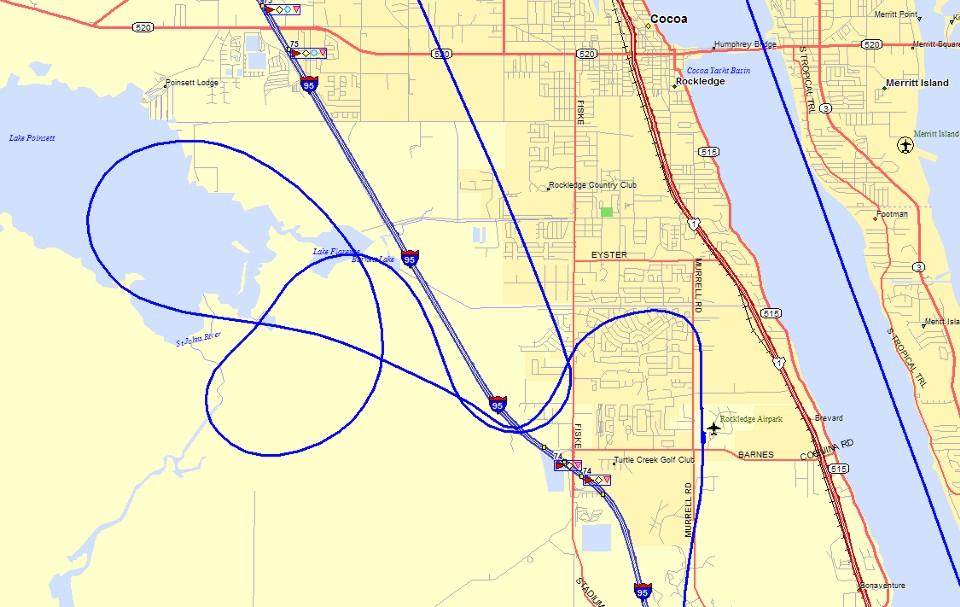 With Enterprise safely back in the hangar, I need to take one more photo to show how I had to move the Aventura II before I could get my airplane out to go flying this morning. 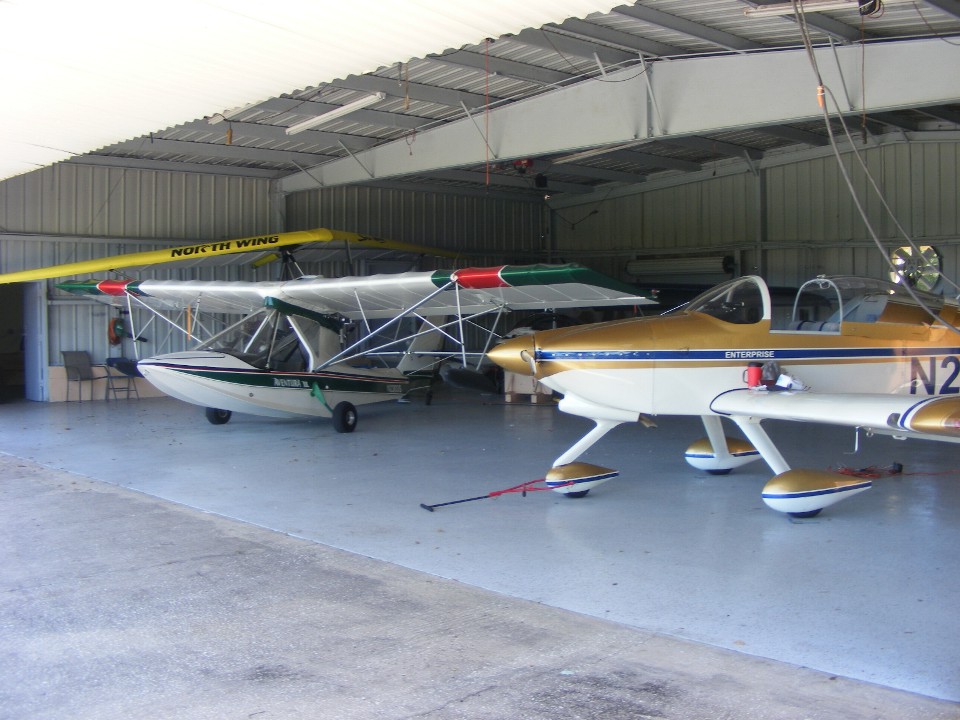 When I came to the airport earlier today, this AV2 was sitting about two feet to the right and about three feet closer to the hangar door.  You can see my wing tip and landing light at the right side of this photo taken at the end of the day.  If I had remembered to take a photo this morning, my wing tip was behind the outrigger float.   After I positioned that airplane as you see it here, I could get my airplane out to the ramp.  I closed the hangar door and turned out the lights before I went flying.   When I returned from my 1.3 hours of flying, the airport manager Bill pulled up in his car after I had shut off my engine.  He introduced his wife to me while I was still in my seat.  My reply was "Bill, I did not see you in the driver's seat since I was distracted by this lovely lady!"  She smiled and Bill was proud as usual.  It was the first time I had met her. 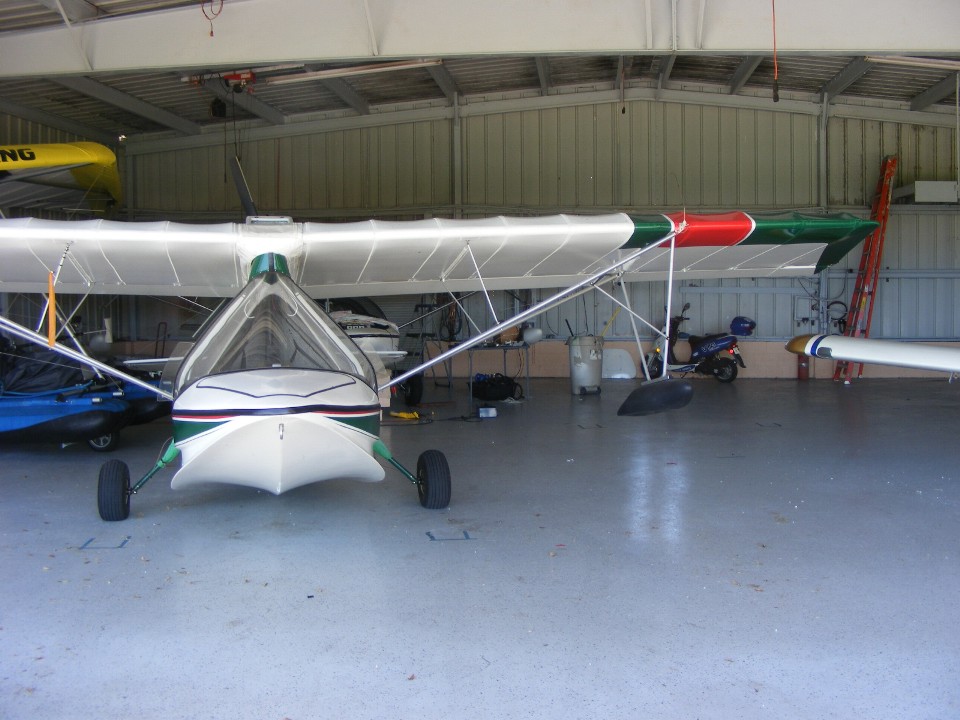 It is after 6 PM as I get ready to publish the updates to this web page.  July 19, 2014 was my previous flight date.  This was a good day.  I cleaned up some bird droppings on the airplane and the canopy dust before heading for home.  The Hobbs meter added 1.3 hours for a new value of 359.1 hours total engine and airframe time since June 2005.  It is raining now as I update the page with the GPS ground track map of the landing back at Rockledge Airport.