June 15, 2006:  I spent the early evening at the hangar to work with Wendell and do one final check of the video camera zoom lens adjustment and focus.  Here is a shot looking through the windshield from the pilot's side at the remote video camera with the varifocal lens exposed for adjustment. 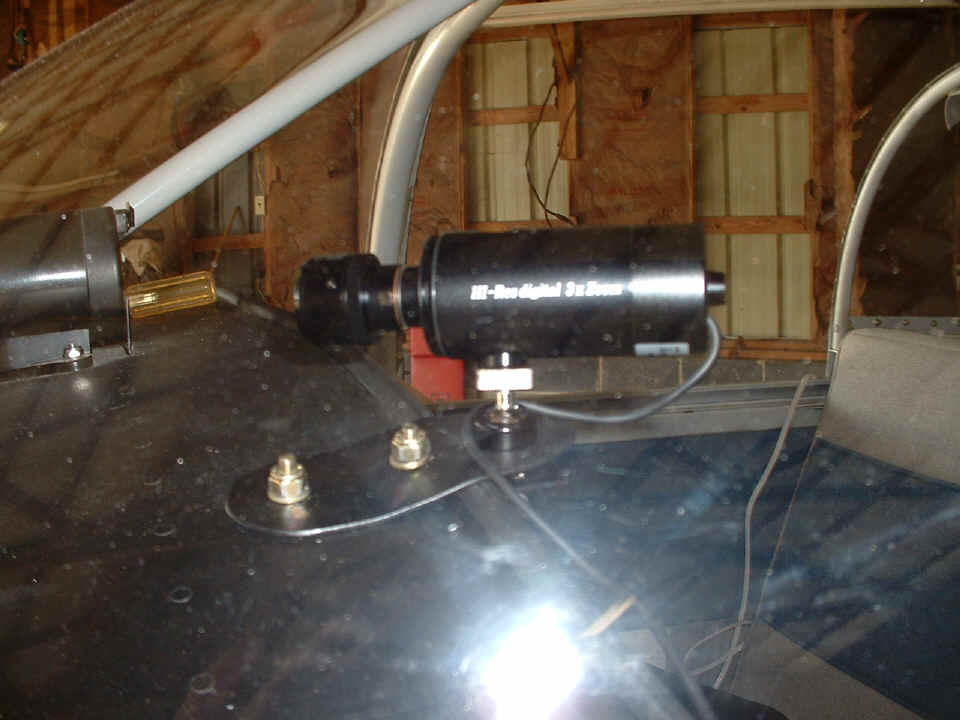 Here is another view showing the details of the lens and the locking ring when the zoom and focus are completed.  I switched to macro mode on my digital snapshot camera to get a sharp focus on this photo.  This lens has two moving parts.  The little "set screw" on the side is really a handle to change the magnification (zoom) on the lens.  The larger "thumb ring" locks the lens mechanical settings after the front of the lens is turned to set the focus when the zoom adjustment is completed.  That threaded "cup" at the left side of the photo on top of the camera body is for mounting the camera from an overhead position.  A similar cup is on the bottom side of the camera, and that is the one I am using for this dash-mount installation. 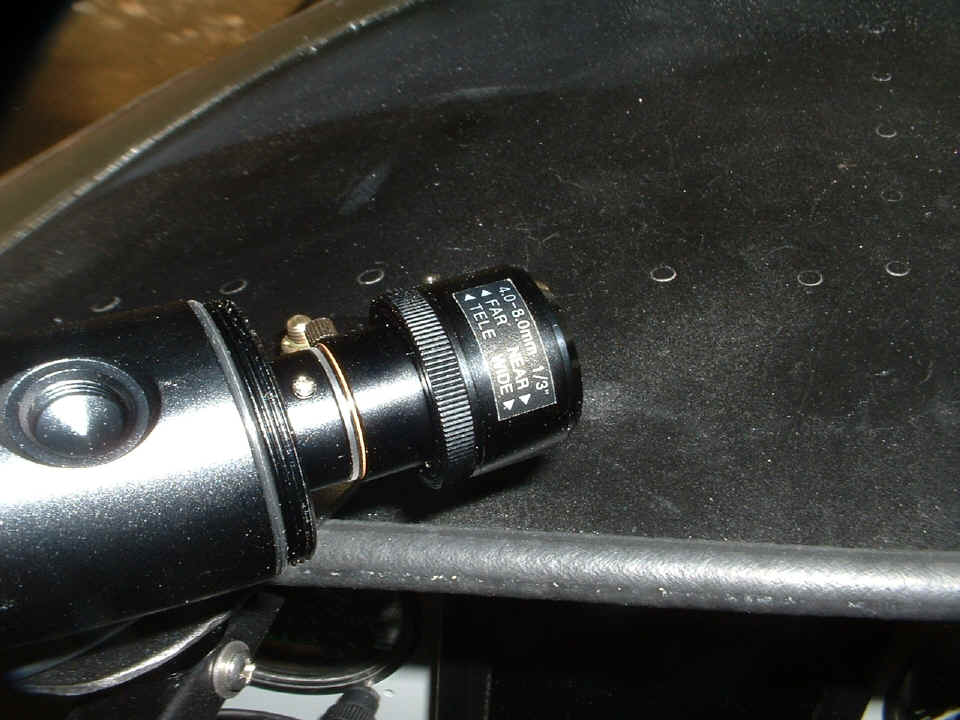 After completing the adjustments above, I made another short video test to verify the quality of the television picture at various digital zoom settings.  I now feel confident I will get the best possible video in my upcoming flights.

A bit of news from Wednesday evening:  I changed the 8-32 truss head screws on the cowl to 8-32 flat-head screws with Tinnerman washers to prevent any more peeling of paint around the screw heads.  All of the missing paint is now covered by the washers.  Of course, the countersink bit was used to prepare the fiberglass cowl screw holes to accept the flat-head screws and washers.  The four screws at the front center of the cowl in the air intakes are still truss head types since I could not get my drill and countersink into the confined space.

I also changed the four "motorcycle" spark plugs used by the Light Speed Plasma III ignition.  I received new spark plugs Tuesday evening and finally got a chance to change them while working on the cowl screws Wednesday evening.

I have some new photos of Wendell working on his wing tip installations.  You can find those photos and text on his new PAGE 21.

June 18, 2006:  Off to Denver on a Sunday, Father's Day.  I woke up Sunday morning, checked the Southeast 2100-mile weather radar and realized the way had opened up on the most direct route to Denver, almost.  I took off from home at 9:25 AM in clear weather and headed West intending to go directly to Fayetteville, Arkansas for my first fuel stop.  I started the video camera on the ramp in front of the hangar and made a recording of the takeoff and climb out to the west of the Chattanooga area.  The system worked well except for the strobing of the propeller blades when I would have the camera looking directly forward.

As soon as I got the airplane to a reasonable starting altitude and turned on the autopilot, I called Nashville Flight Service to get an update on the rain showers along my intended route.  He brought me up-to-date to real time from the changes that had occurred since I turned off the computer at home and packed it for the trip.  He suggested a route south of Huntsville, Alabama -- then direct Tupelo, and finally, direct to Fayetteville, Arkansas.  As I got closer to Huntsville, I realized that I needed to be on top of the broken and scattered cloud layers to fly the route.  Although I was in the clear at 10,500 MSL, the flying was better at 12,500 MSL. 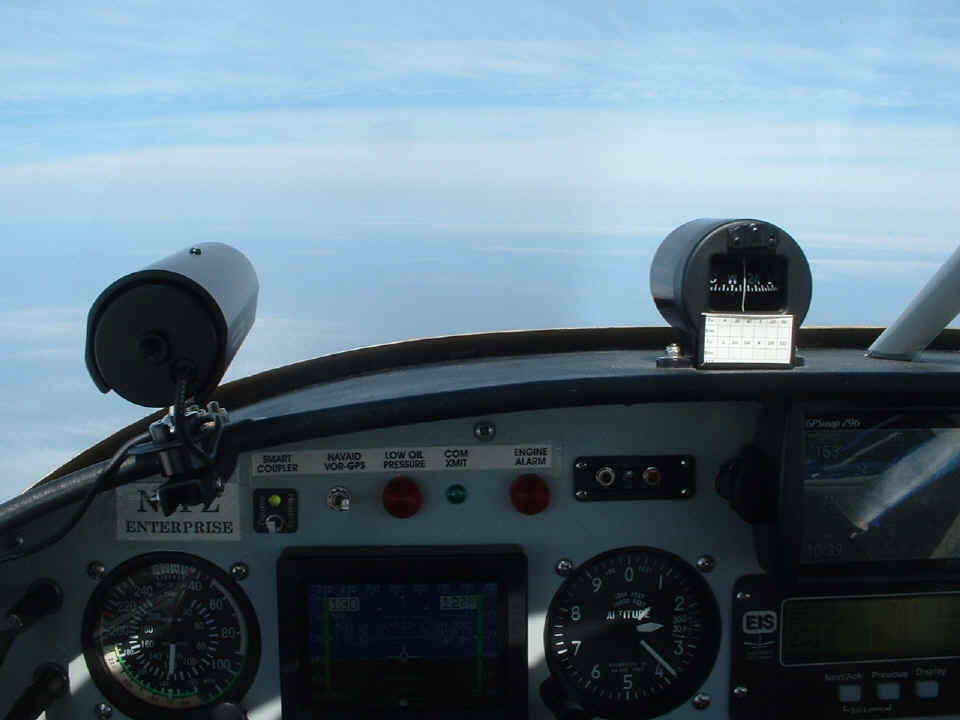 This next photo shows my position on the GPS 296, along with the flight conditions.  I have passed south and west of Huntsville, approaching the Alabama state line with Mississippi.  Comparing the true airspeed on the Dynon D-10A with the GPS ground speed reveals a 10-MPH head wind on this course to Tupelo, Mississippi as my next waypoint. 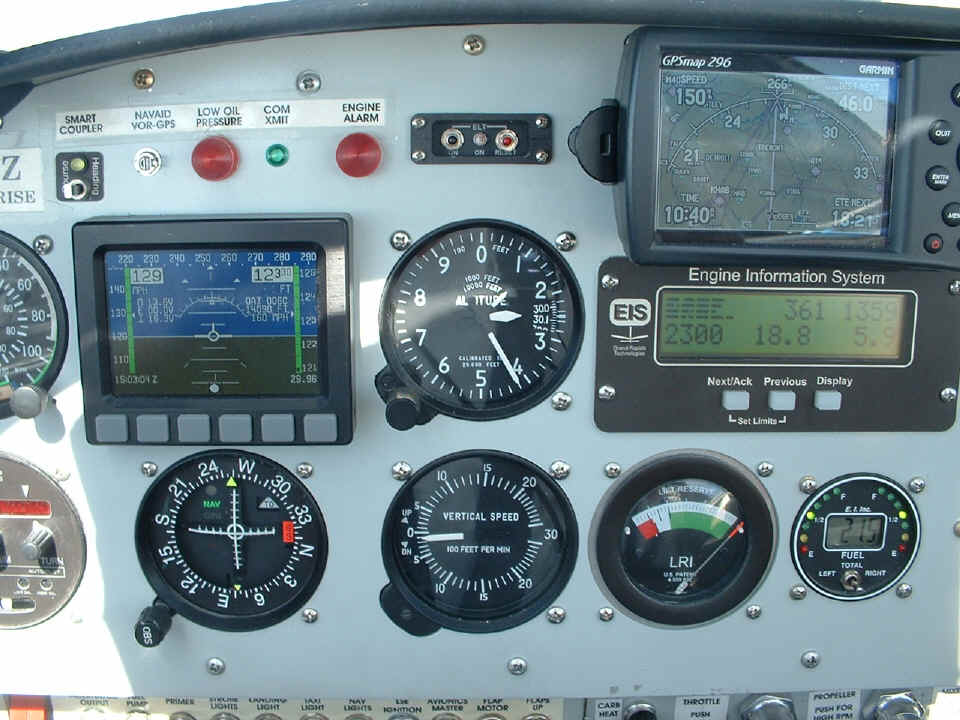 One look out the window shows a day similar to the one when I returned from York, PA in the summer of 2005.  As I got to the Memphis area, I monitored the approach controllers since I would be overflying their airspace at 12,500 MSL.  There were a lot of airplanes coming and going from Memphis getting long vectors around a front that had built-up northwest of the city.  Since I was up high already, I could see the places where I could pick my way around tall clouds like this one and remain in VFR conditions. 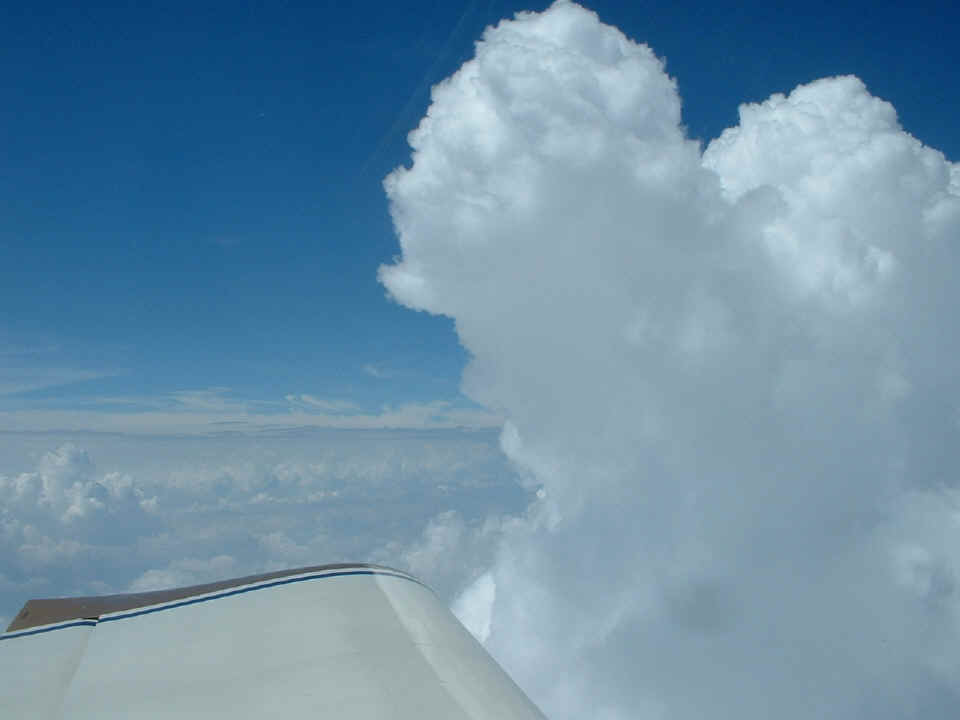 After getting past the front, this broken and scattered cloud layer below greeted me for my descent toward Fayetteville, Arkansas. 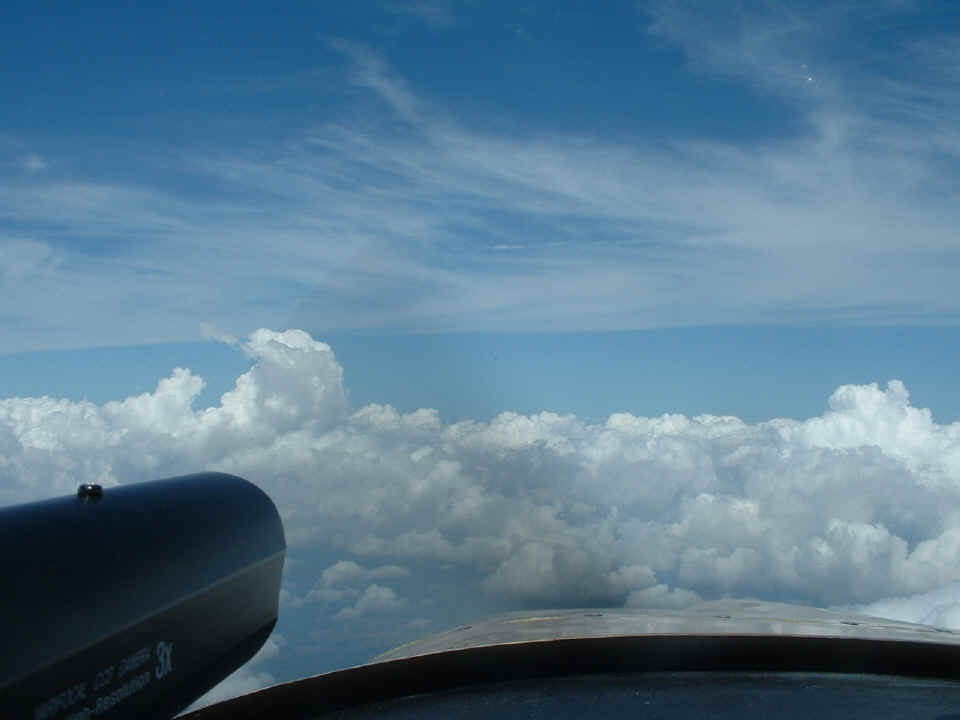 Below the cloud layer, conditions just got better the closer I came to Fayetteville.   Memphis handed me off to Razor Back Approach.  The controller told me ATIS information November was current.  I excused myself from the frequency to listen to the recorded message.  It seems that an air show is starting about an hour from the time I first listened to ATIS at KFYV Drake Field.  I had just enough time to land there, get to the self-service fuel pumps, then get out before the air show started.  The red warning light below tells me the fuel flow meter thinks I have less than 8 gallons of fuel aboard. 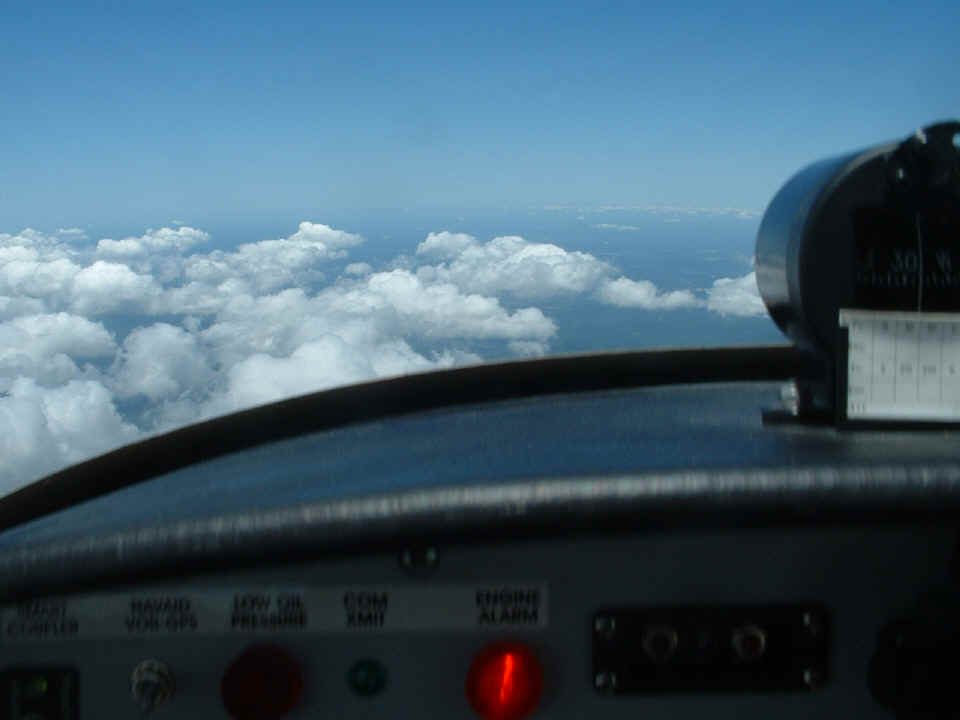 I had planned to make a video recording of the landing at Fayetteville, but all things seem to go awry when you are being given quick vectors for landing traffic.   The tower controller was getting into the excitement as the countdown to airport closure approached.  I told him I wanted to go to the East Ramp to the self-service fuel pumps and was cleared over there.  During my stop, one of the staff drove by and told me they were clearing out that side of the field due to air show regulations.  I said I would be out of there in under ten minutes, and that was about right.  The Google Earth image below I captured on May 12, 2021 shows my departure path on the north end of runway 34 on June 18, 2006.  The fuel pump for AVGAS is at the bottom of this photo below at the end of the red line. 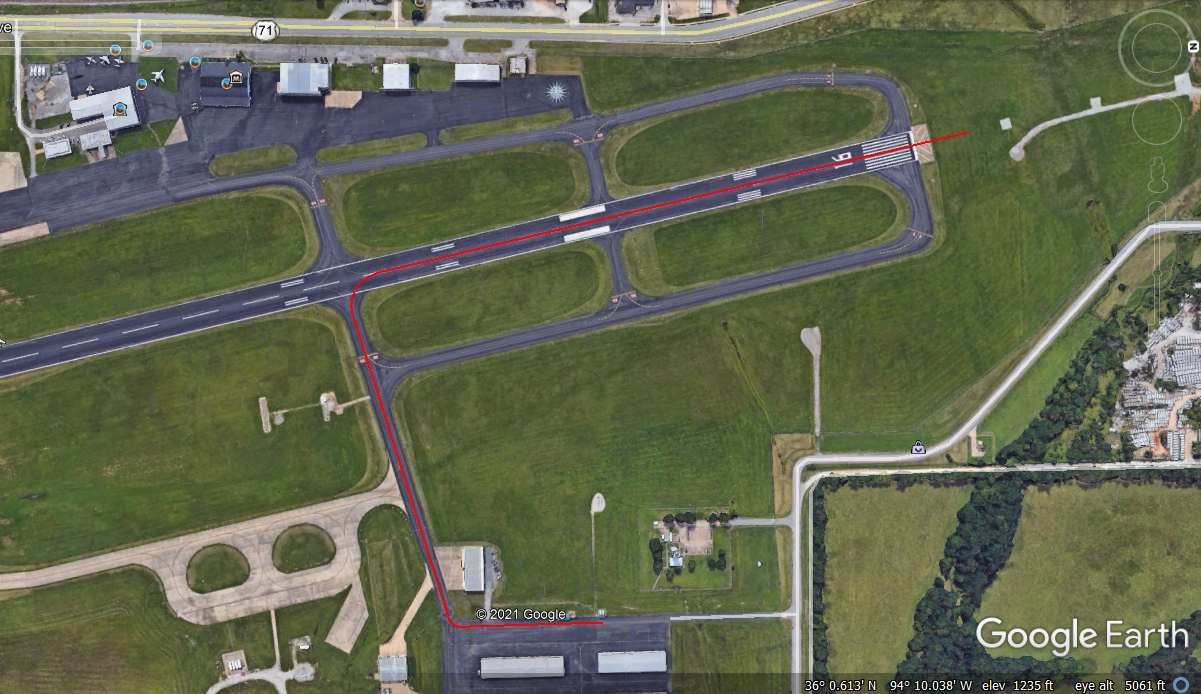 When I got the engine running, the tower cleared me to move to taxiway E and get ready for an expedited intersection takeoff.  I managed to get rolling on the takeoff while my canopy was still ajar about half an inch.  That was a strange noise.   When I got up and started my turn out of the pattern, I took a minute to secure and latch the canopy closed, making the normal cabin noises return.  I departed the area staying clear of the Class C airspace and headed in the direction of Wichita going across NE Oklahoma. 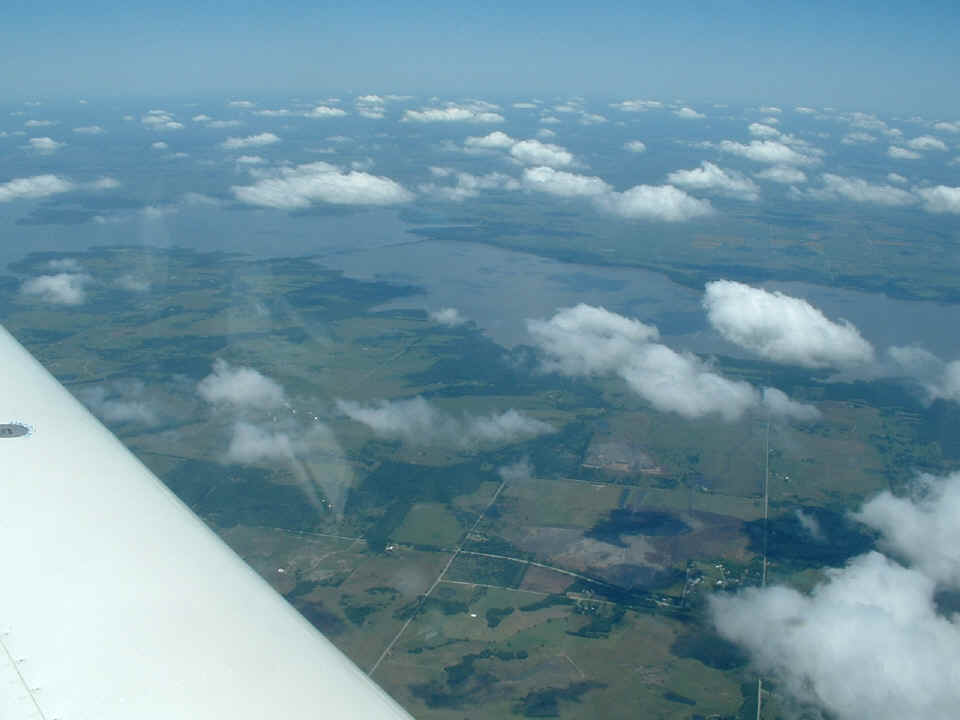 That is Oolagah Lake in northeast Oklahoma as I head for a crossing of Nowata Municipal Airport.  Those are Indian names.  I grew up in North Georgia where a lot of places have Indian names.