January 5, 2014: I managed to get in a flight today with fairly good weather here along the Space Coast of Florida.  The GPS ground track was about 163 miles round trip.  The straight line distance was about 72 miles 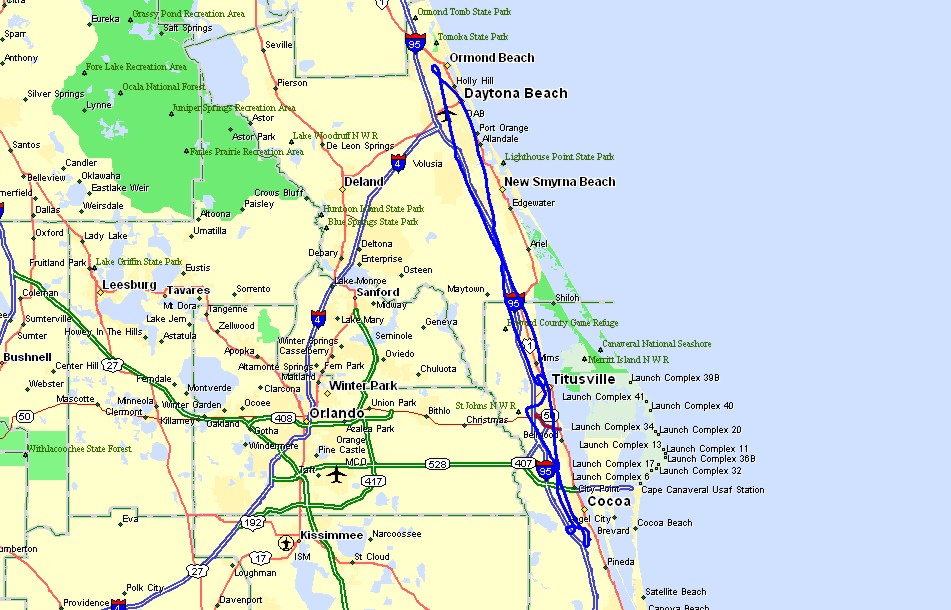 The takeoff and landings at Rockledge Airport were on runway 36 with a circle to climb up high enough to go over the top of the Titusville Airport after the northbound departure. 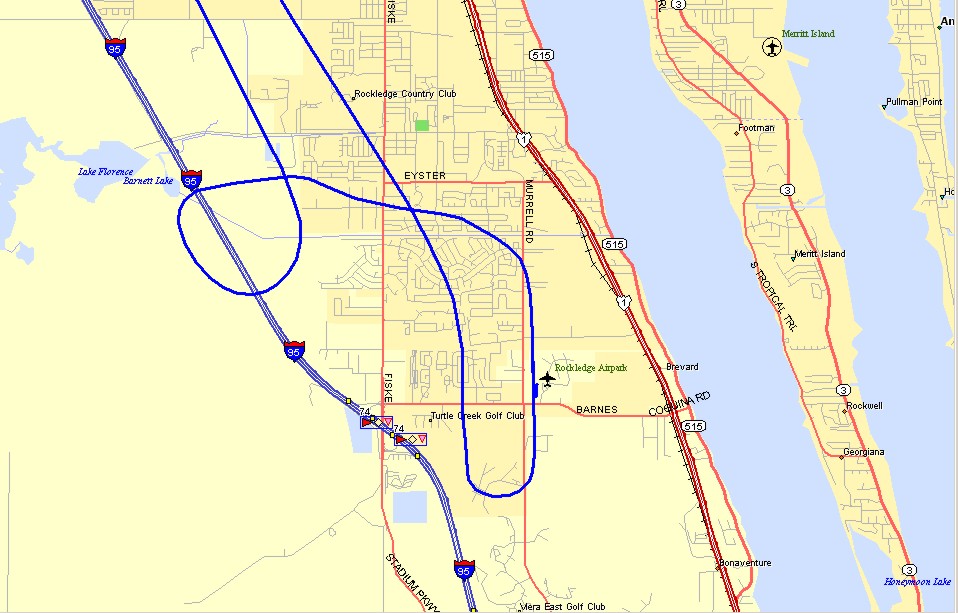 I wanted to see the Spruce Creek private airport during my flight north.   It is located to the west of the New Smyrna Beach airport which is shown in a photo further down the page.  There was some cloud cover in this area when I flew north and I did not try taking a photo.  I could see the runway and the "taxiways" shown on the map below.  The runway is not shown on this map, but it is 4000 feet long and 180 feet wide.  John Travolta lived here at one time and flew his Boeing 707 in here before they forced him to move to a bigger field near Ocala that is 5000 feet long. 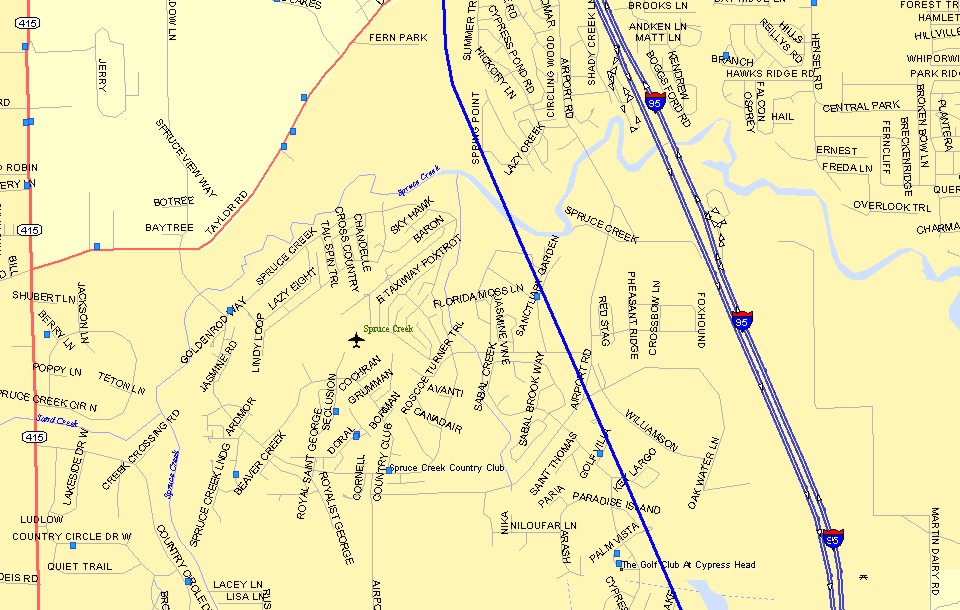 The Ormond Beach Airport is really out there at the center of this photo.   I processed the photo to help minimize the hazy conditions today.  This photo was taken from about 4,500 MSL over the top of the Daytona Beach Class C airspace. 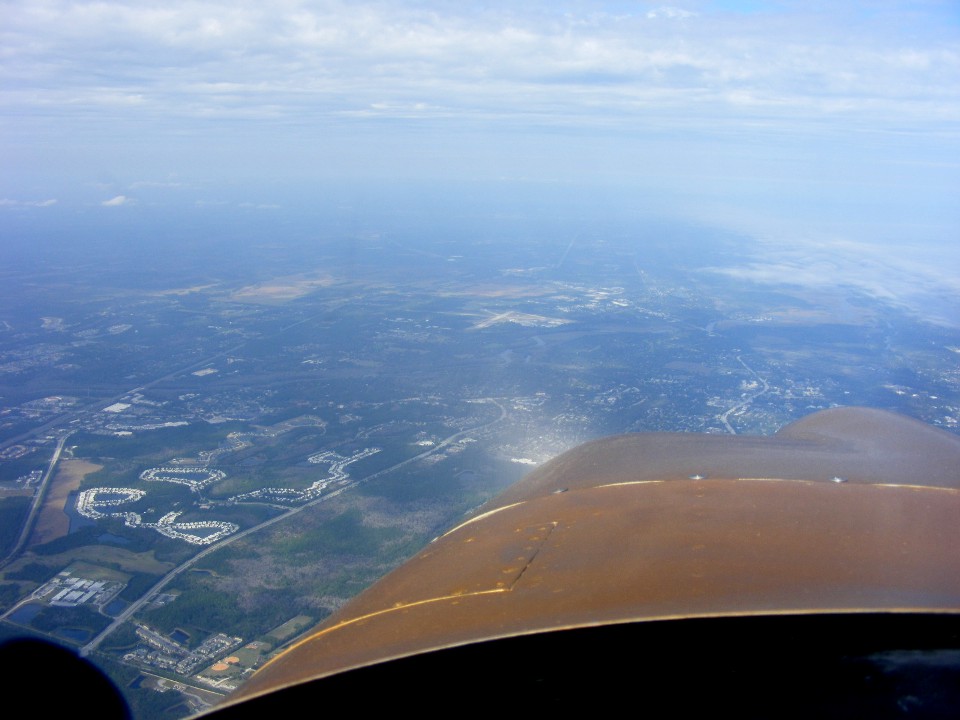 This second photo shows the airport clearly.  It is located adjacent to the Tomoka River with US 1 to the northeast side of the field and I-95 to the west of the airport. 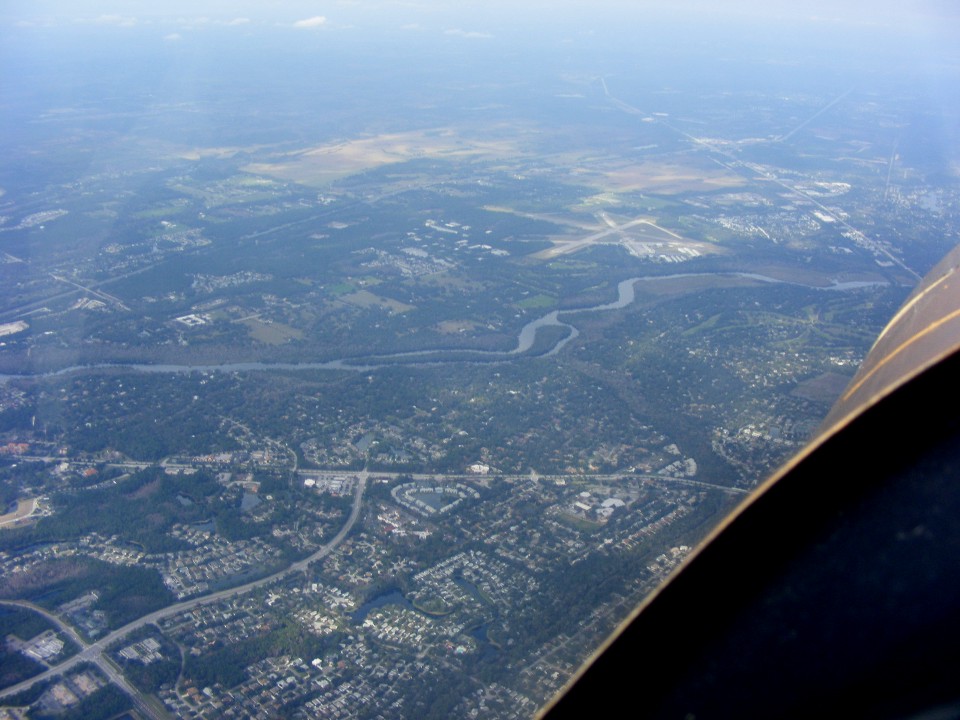 The map below shows how I turned south after taking the photo above.  My ground track heading north was directly over the Daytona Airport with my southbound route over US 1 at 5,500 MSL.  I did a climbing turn trading my airspeed for altitude before getting on course for the trip home. 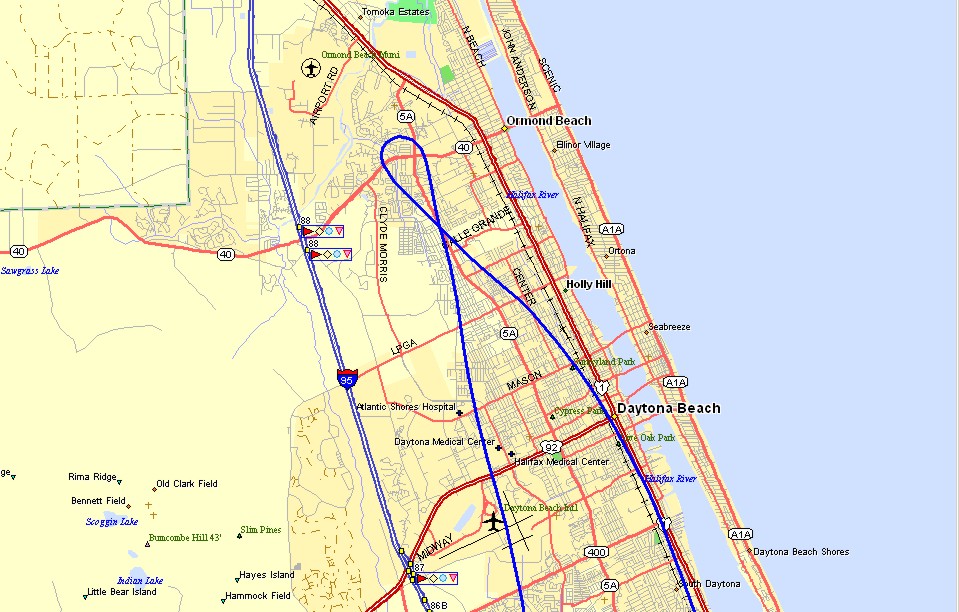 The Ponce de Leon inlet is at the mouth of the Halifax River.  You can see some boaters enjoying the good weather this Sunday before the cold front and rain come into the Central Florida area tomorrow.  This photo was taken from 5,500 MSL as I fly parallel to the beach south of Daytona. 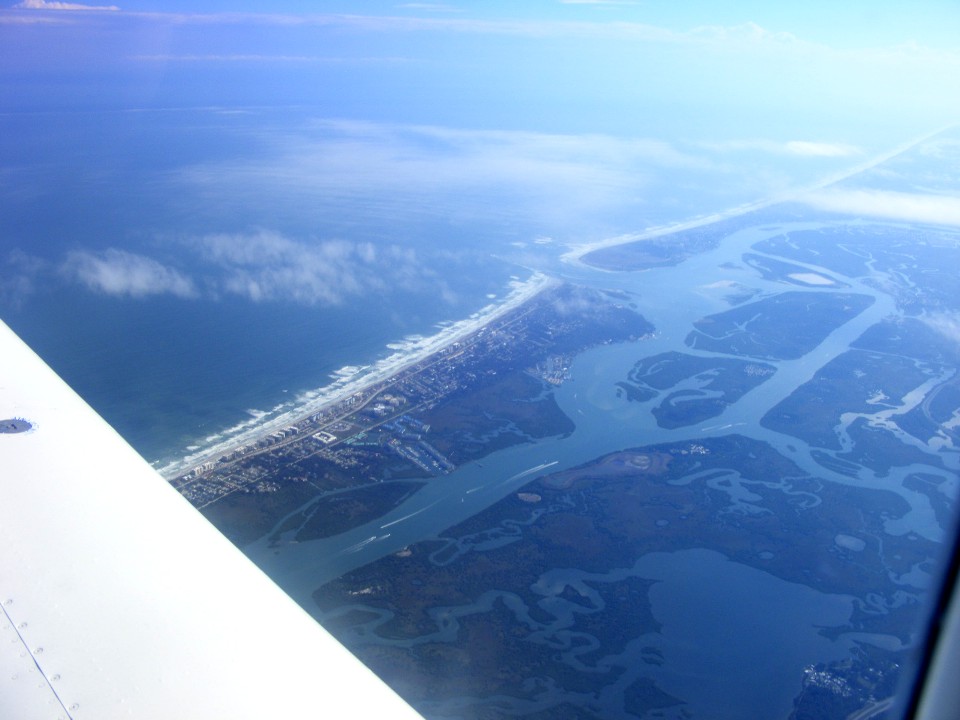 This second photo in the same area shows how near the New Smyrna Beach airport is located to the inlet at the left side of the photo.  That four-lane highway is US 1 heading south with the airport on the west side of the highway. 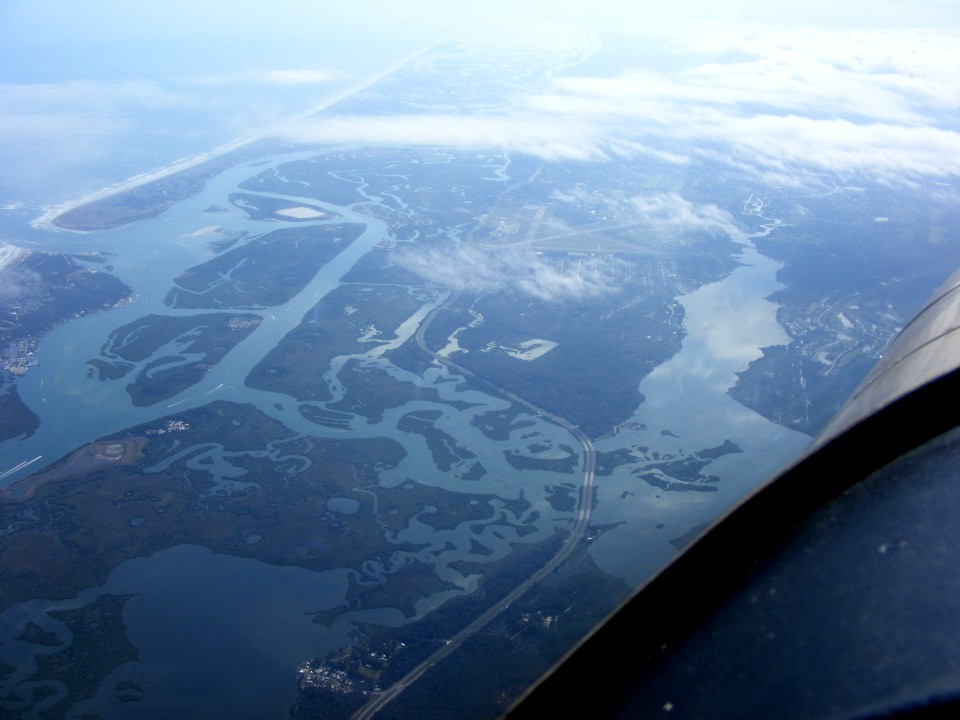 I made a full-stop landing at Arthur Dunn Airpark (X21) on the north side of Titusville, Florida.  I noticed a parachute jumper landing on the west side of runway 15 as I was landing.  The jump plane was a King Air and came in as I was on the taxiway coming back to take off again. 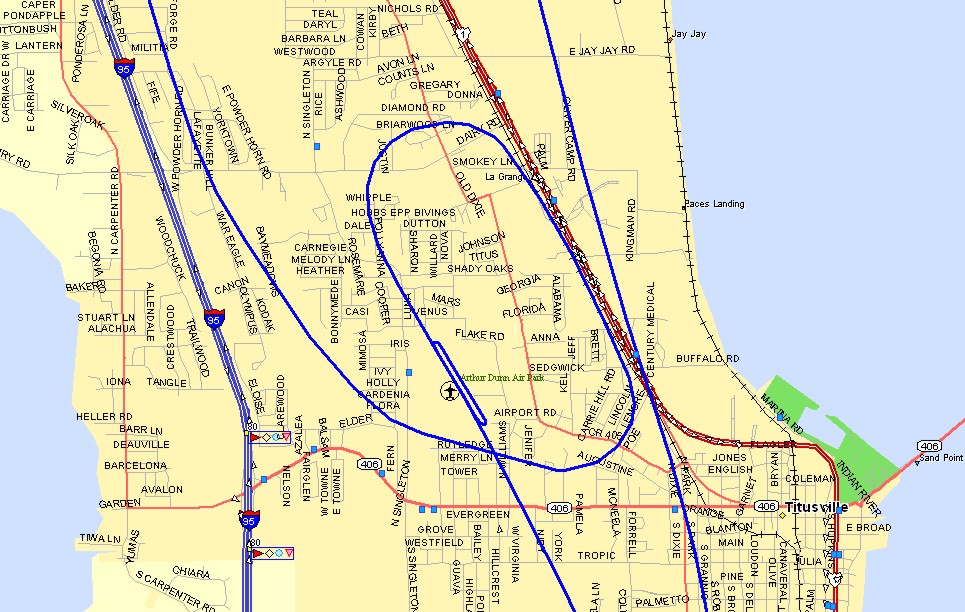 The causeway at Cocoa is Florida state route 520.  It was raining here last Saturday as the wife and I were shopping for a new car at a dealer out there on Merritt Island. 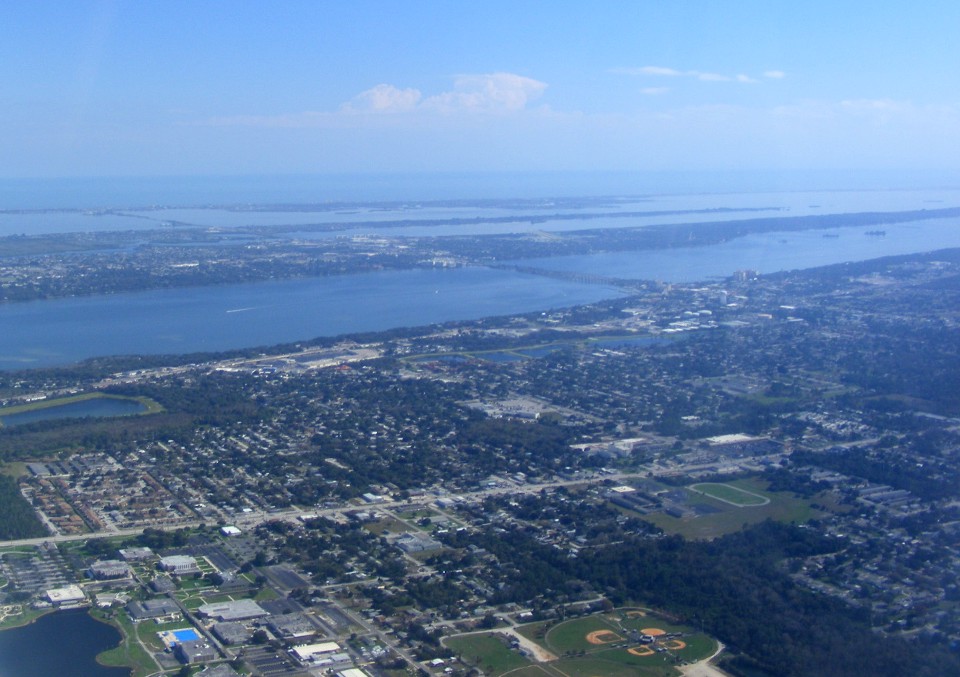 It was a good day to go flying.  The Hobbs meter added 1.4 hours today to a new total time of 351.7 hours.  I had to do a minor repair on my battery charger before I left the airport.  One of the spade lugs had come loose from one wire.   The other purpose for today's flight was to burn some of the fuel in my left tank.   It contains about 3 gallons which I will pump into my gas can in preparation for sealing the weepy rivets in that fuel tank.  The fuel seepage in the earlier repairs affected the curing of the epoxy on the bottom of the wing.

The high temperature today was 77 degrees and it is 68 outside as I publish this page just after 10 PM.  It was raining here in Palm Bay when I started preparing the photos and maps for this web page about two hours ago.  The prediction is 35 degrees for the low tomorrow night as the cold front pushes all the way down to this part of Florida.

March 9, 2014:  It has been a while since I could offer up anything on flying my airplane.  My day job had me on the road for a couple of trips out of Florida with my demo equipment in a rental car.  The most recent trip was the last week of February and the first week of March out to Texas and back with a number of stops enroute to see customers.

I did manage to repair the leaking rivets in the left fuel tank.  I drained the tank to stop any fuel seepage when I was clearing the old epoxy and putting on a new thin coat in just the right places.  I went out to the airport Saturday, March 8 to put the fuel back in the tank and fly over to Umatilla Airport (X23) to fill up the tanks.  I put in 30 gallons since I had 6 gallons in the tanks when I arrived there.   The underside of the left tank shows no signs of seepage now.  I took this photo after returning to the hangar full of fuel to be sure there was no seepage.  I roughed up the surface with sand paper and a Scotchbrite pad before putting some spray paint on it. 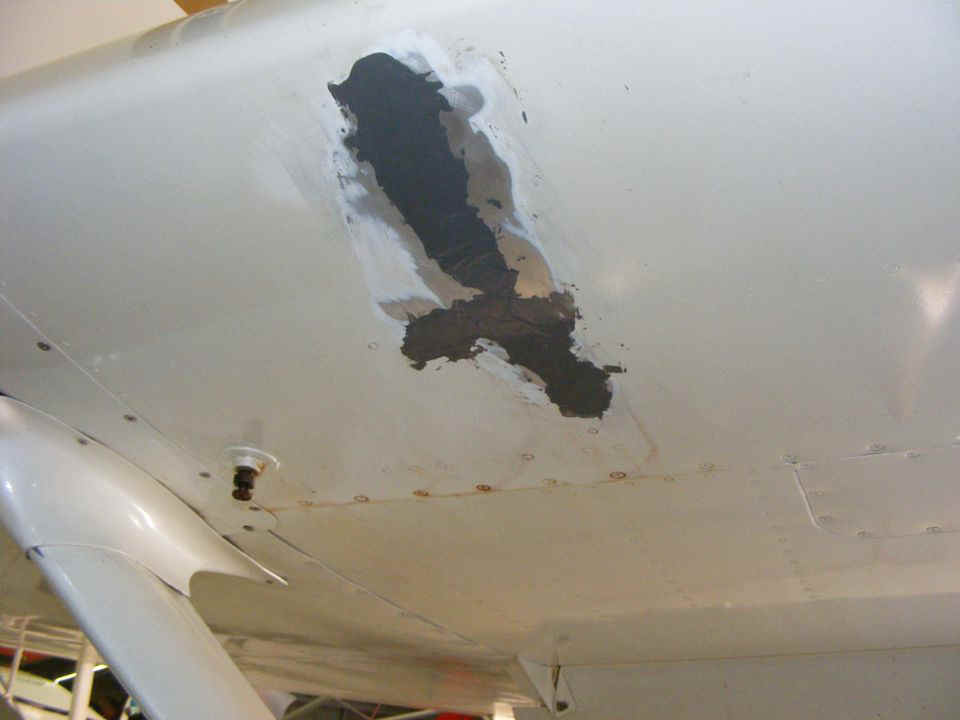 This is the other place that needed work.  It was also sanded to clean things up before some spray paint. 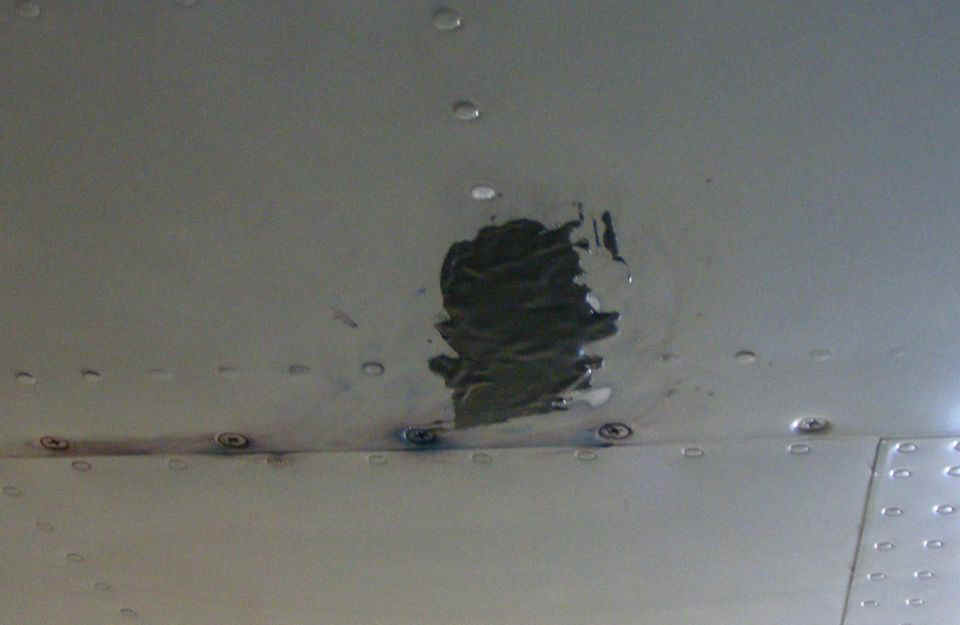 I went back on Sunday morning to help save my battery minder from being beat to death by falling off the wing.  I repaired the broken connections between the circuit board, the LED indicators and the DC output.  I got this idea about using safety wire to make a simple "harness" to hold the charger on the step when the airplane is in the hangar.  The green light indicates the battery is fully-charged.  The RED LED indicates when the charger is in the 2-ampere mode to bring the battery up to a full charge. 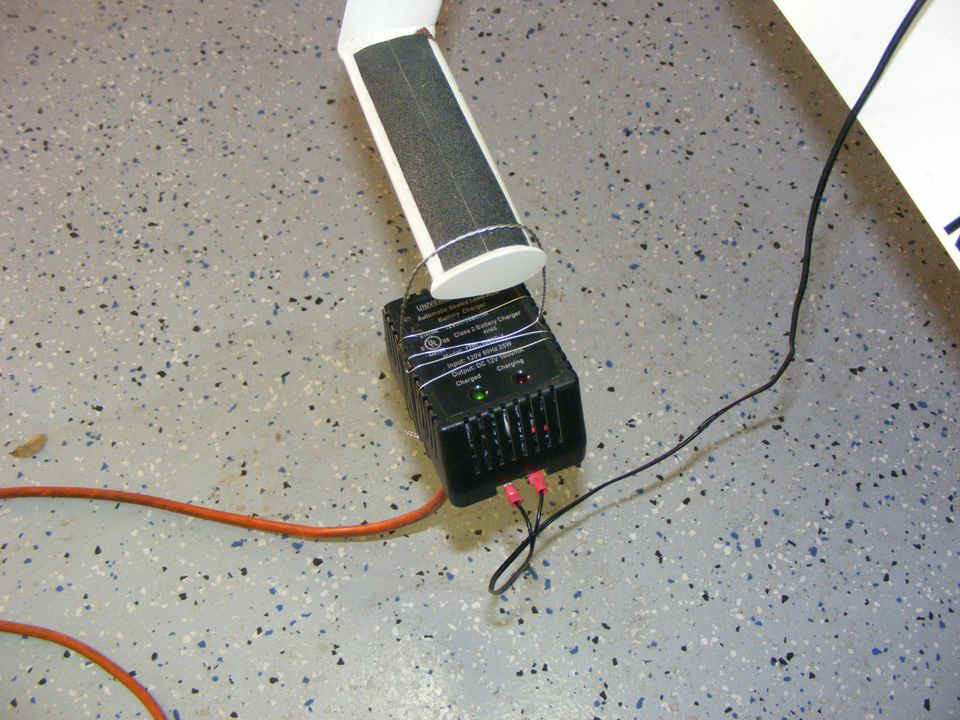 The flight over to Umatilla and back to Rockledge on Saturday added 1.5 hours to the Hobbs meter for 353.2 hours total time on N2PZ.

There is one more thing to mention about this web site.  My old computer that has published all these pages, is being retired.  I bought a new Lenovo laptop a few months ago and found that Windows 8 would not install FrontPage 98.  I finally found a solution and it was not a new publishing program since the one I tried was not friendly to the web server I use to host this site.  I found out I have so much processing power, memory and hard drive space that I could create a Virtual Machine running Windows XP to load and run FP 98.  The Windows 8 primary operating system protects the XP Virtual Machine from hackers and viruses.  That means I don't have to worry about keeping XP updated when Microsoft stops supporting XP in April 2014.  It is amazing how the second operating system runs in a protected mode inside Windows 8.1.