April 27, 2014: It has been a busy month with my day job.  Today is the first chance to update the web site with my recent travels and aviation related activities.  I actually had a short one-hour flight around the local area yesterday.  More about that later...

I flew out to Las Vegas beginning very early on Sunday, April 6 via Delta Airlines.  The direct flights from Atlanta to Las Vegas were sold out by the time I bought my round trip ticket.  The route that day for me was Melbourne, Florida to Atlanta, then non-stop to Seattle.  I had to walk from one end of the Seattle Terminal to the other to catch the CRJ-900 flight from Seattle to Las Vegas.  I was up at 4 AM Eastern Time, and in the taxi to the airport at 5 AM.  The flight out of Melbourne was on time and I had plenty of time to pick up a sandwich for lunch on the flight from Atlanta to Seattle.  The flight down to Las Vegas arrived around 3:30 PM Pacific Time.  I got to the hotel and crashed.  The jet lag got me up for an early breakfast in the Riviera Hotel.  I was in town for the National Association of Broadcasters convention (NAB SHOW) at the Las Vegas convention center.  The show filled the entire convention center.  Two days of that was enough as I caught up with a number of folks I needed to see.

I picked up an Avis rental car at Circus Circus hotel across the street from the Riviera on Wednesday.  I had lunch and filled up the car before getting on Interstate 15 for the drive across the desert heading south.  I drove about 275 miles down to the Los Angeles area Wednesday afternoon.  I had hoped to have dinner with the client, but that did not work out for their schedule.  I went to their office and warehouse Thursday morning to provide them training on the fiber optic products that are from my day job.

I drove down to the San Diego area that afternoon to meet up with a couple of guys with Sony.  I designed their fiber optics networks a few years ago that deliver satellite signals and CATV two-way service in both their buildings.  This is the larger building on the south side of the property. 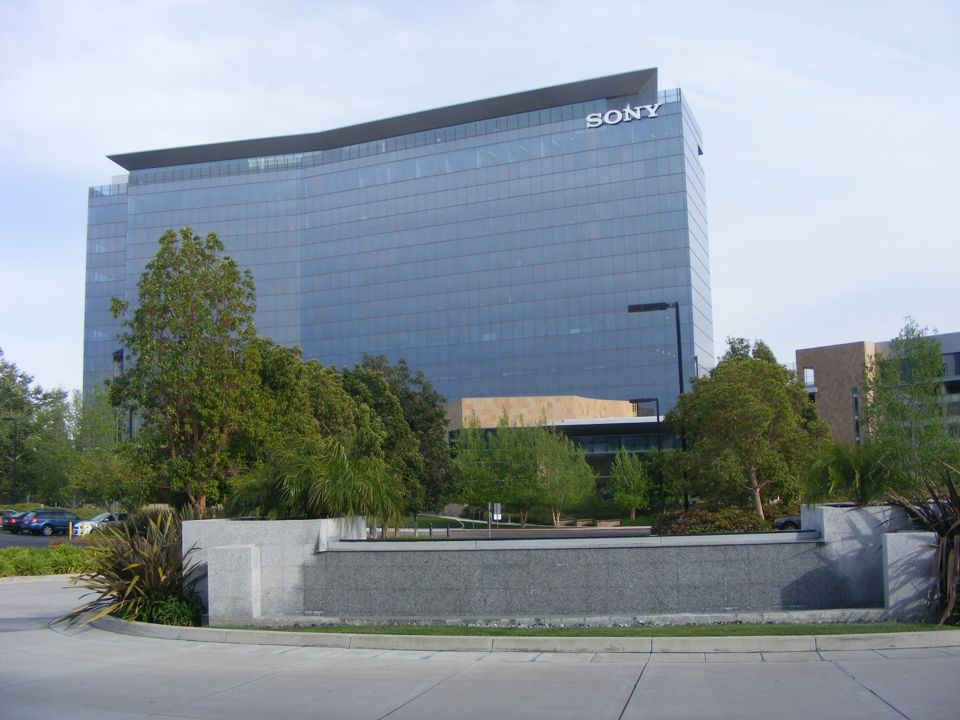 This smaller building to the north has multiple satellite antennas on the roof out of sight from ground level. 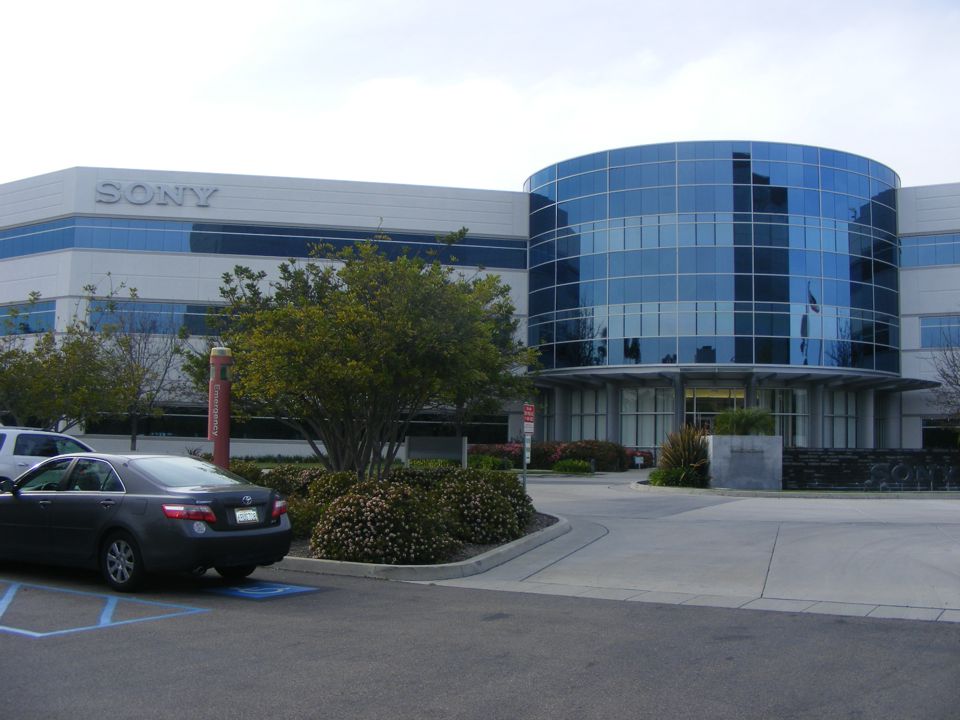 Charles (on the left) and Ray (right) are my contacts here.  Ray and I designed the system via telephone calls and emails a couple of years ago.  Charles took over operation of the fiber networks when Ray was transferred to another division of Sony. 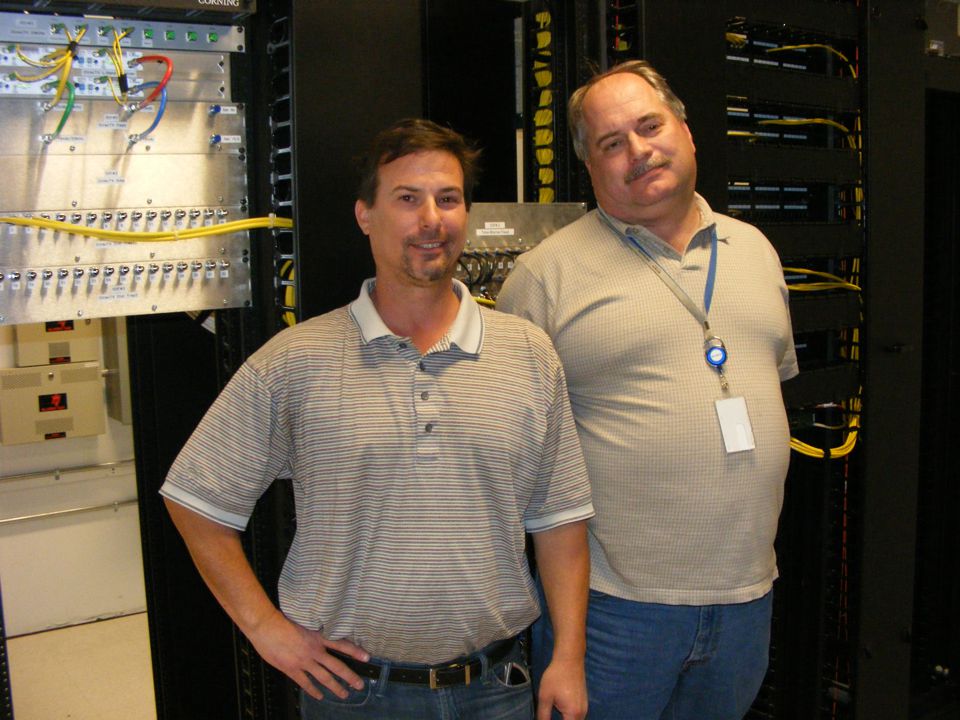 The fiber optic RF equipment is spread among several equipment racks in multiple locations.  This photo shows a couple of EDFA optical amplifiers and the associated DWDM muxes. 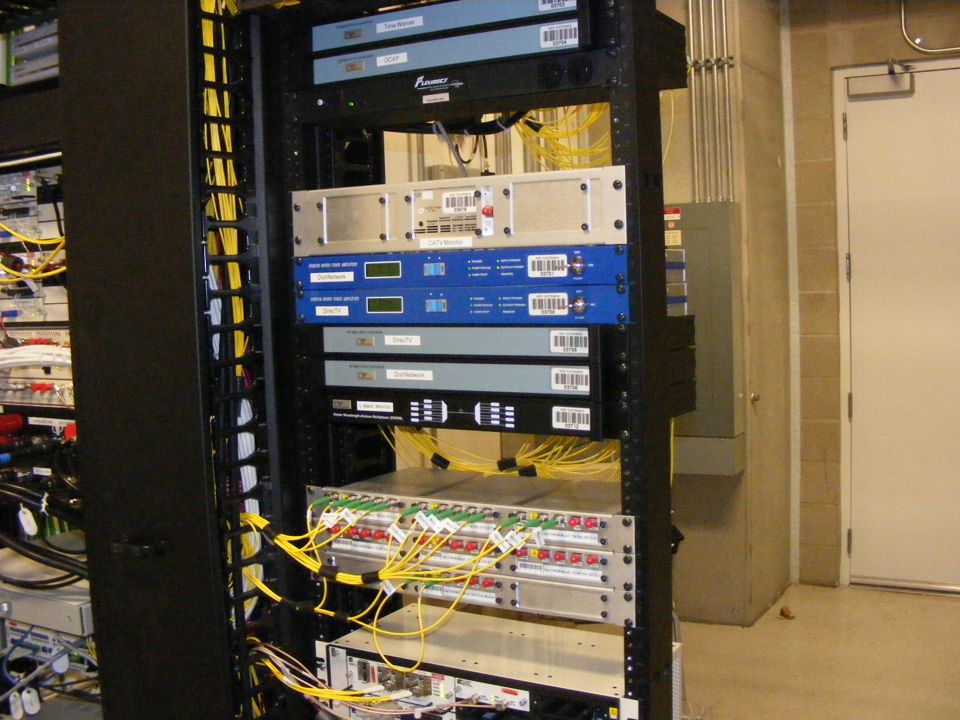 This is the back side of the rack above. 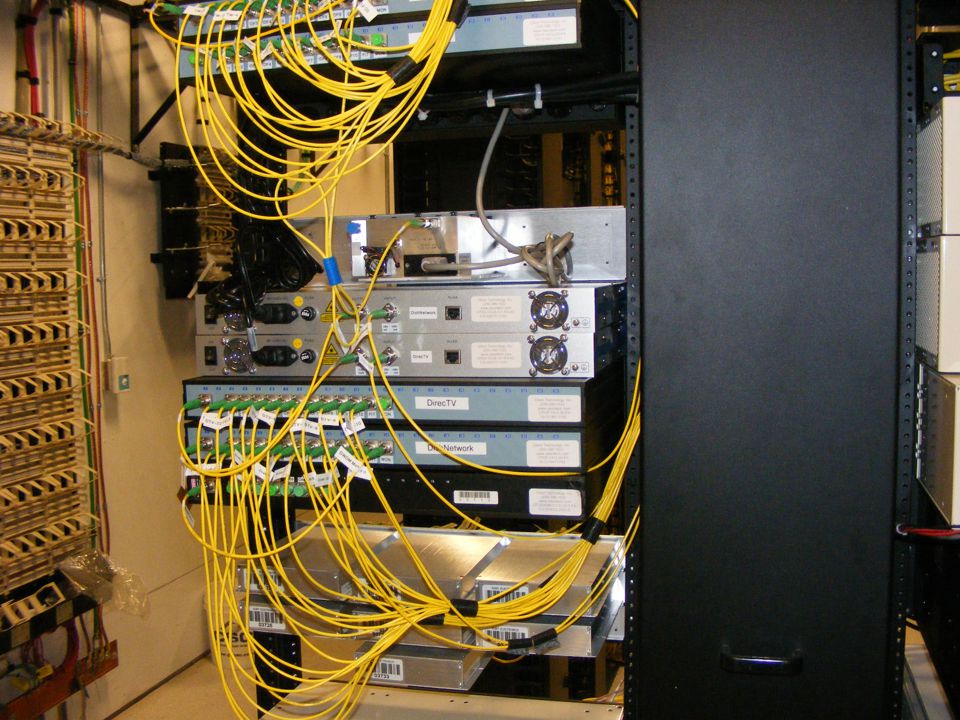 Some, not all of these satellite antenna signals are distributed via the fiber equipment to a number of engineering work stations in both buildings.  These antennas are on the roof of the northern building as seen from near the top of the taller building on the south side of the property. 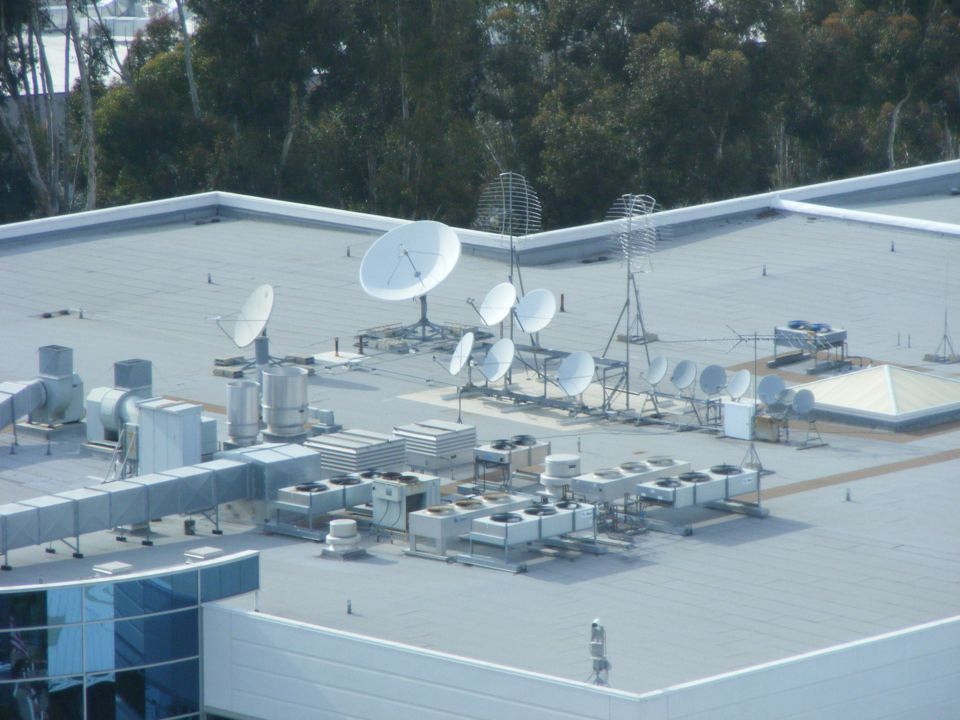 Here is a part of the satellite fiber optic distribution system. 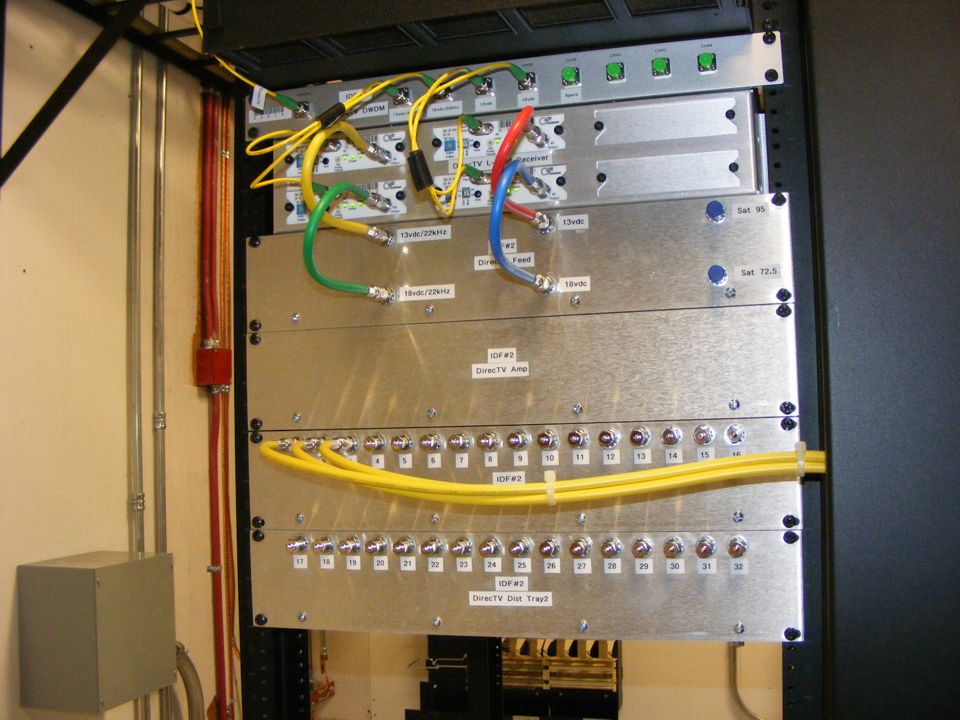 Here is the front side of two LaserPlus chassis with CATV fiber optic modules. 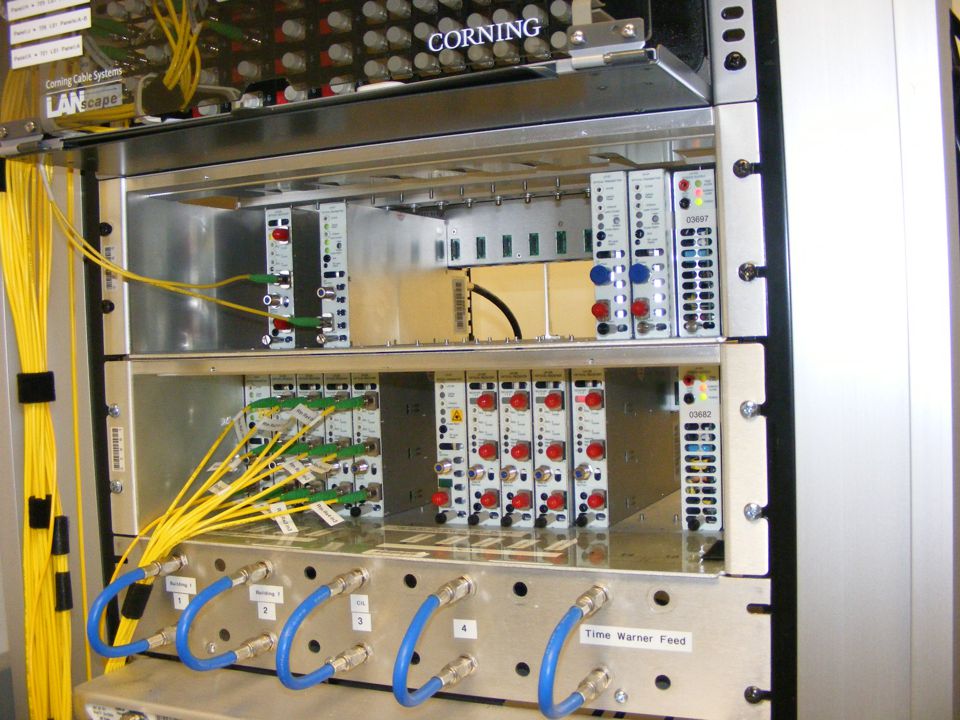 This photo shows the back side of those same two LP Chassis seen above.. 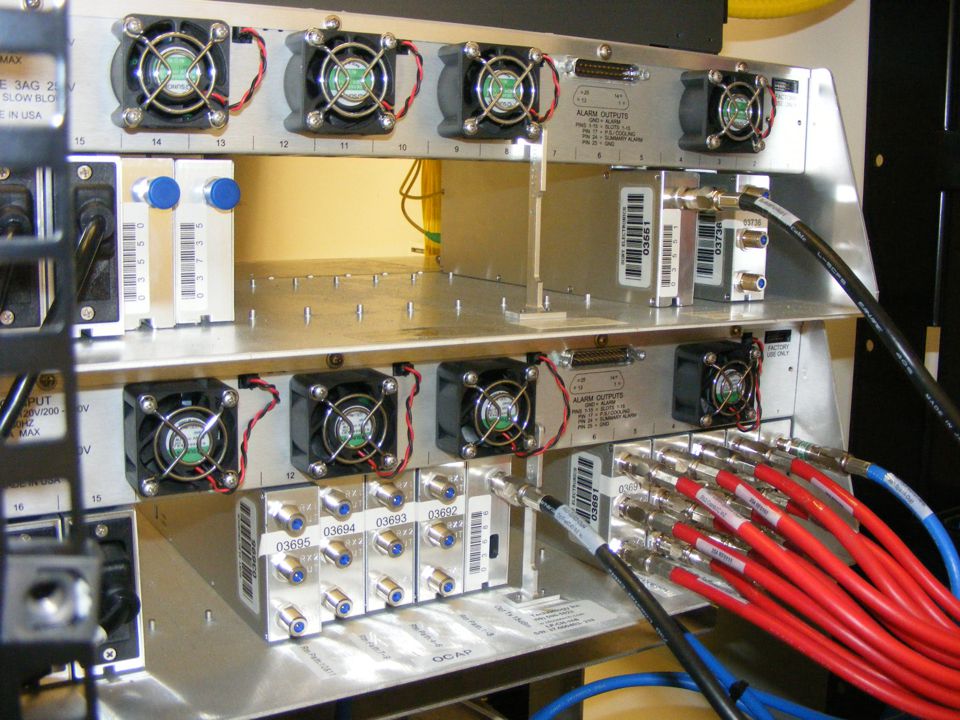 My largest distributor offered a possible meeting with a company in Escondido, CA for Friday morning.  A last-minute schedule problem here worked out for the best as the alternative meeting would be held on Monday, April 14 at their corporate office in Tempe, Arizona.  I already have a meeting early Monday with another OEM client also in Tempe.