December 22, 2012: The airplane ride is almost over as I line up with runway 36 at Rockledge for an approach from the south.  Ian has focused on the cellular telephone tower east of the airport.  My attention is turned toward the runway and displaced threshold north of the power lines on the south side of Barnes Boulevard. 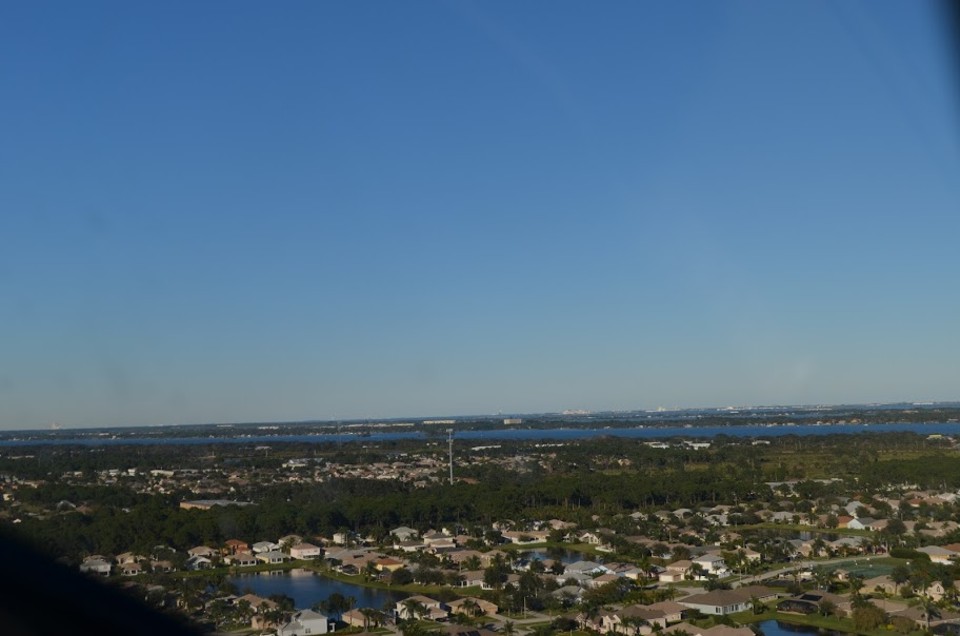 The cell tower still gets Ian's attention with the camera.  Notice the position of the roll bar just seconds after the photo above.  The houses appear larger as my flight path gets lower to the ground.  There are no VASI lights at Rockledge to establish a glide slope.  Stick and rudder skill and experience are the key to a safe landing at any airport. 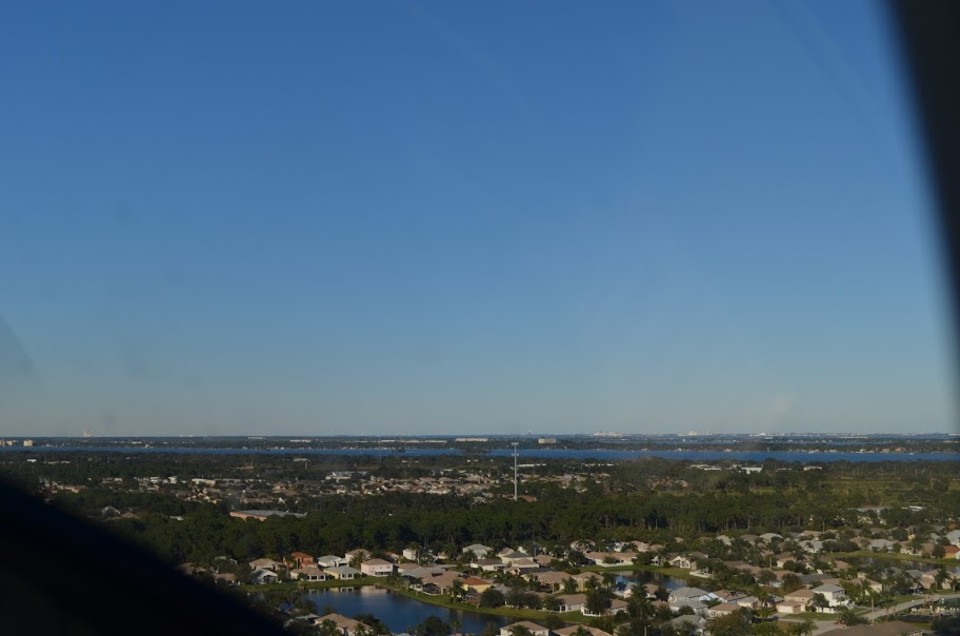 This next shot is out the side window of the canopy. 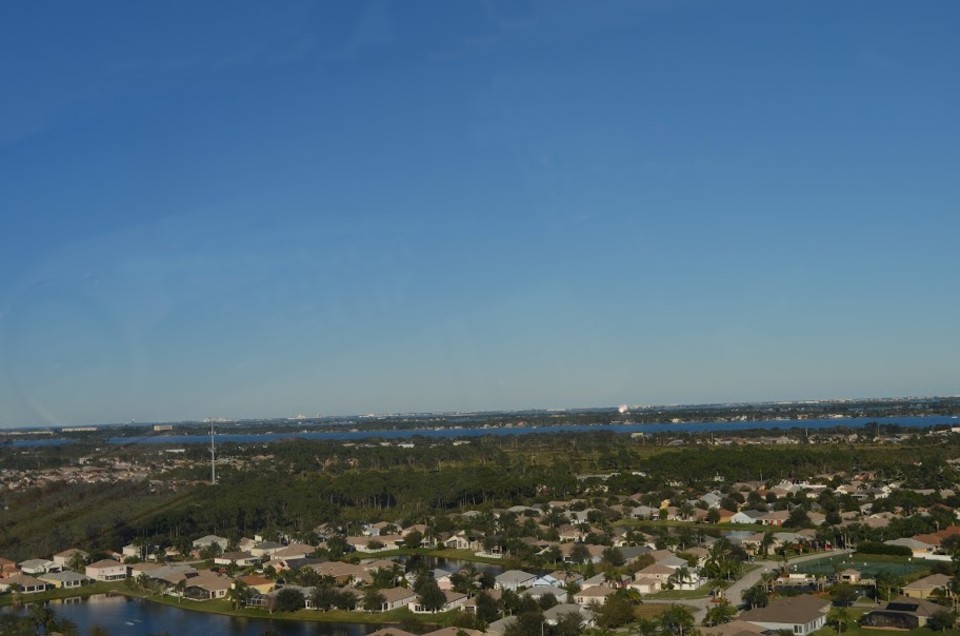 I get the feeling he has zoomed the lens a bit for this photo.  Barnes Boulevard is that shadow in the trees behind those houses below.  The end of the runway is approaching out front of the airplane. 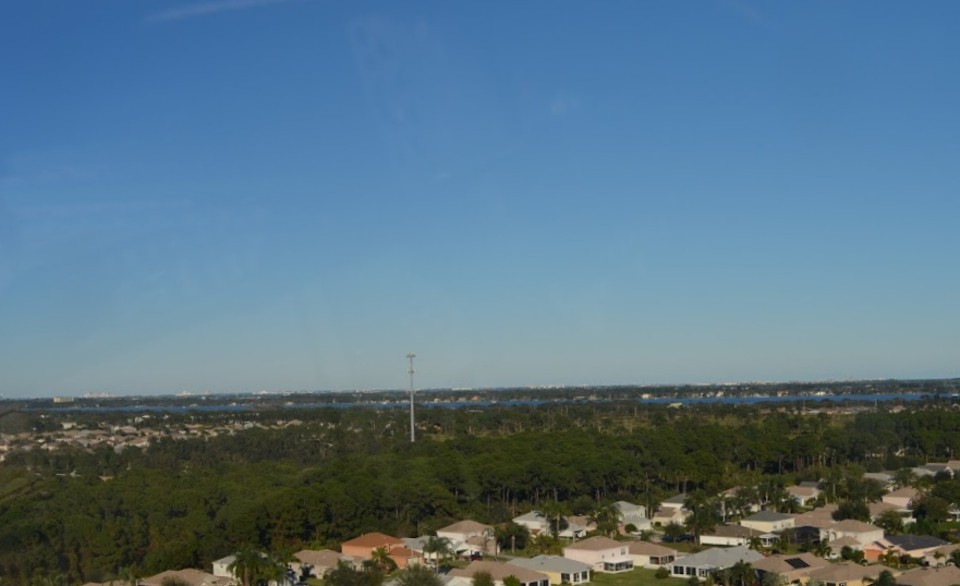 I had hoped Ian would take a photo through the prop arc of the runway, but he did not.  This photo is taken from the short taxiway on the east side of the runway north of the row of hangars.  Notice how he has framed the photo with the fence between the parking lot and the ramp area.  The flag pole is vertical as is the house behind the fence at the airport boundary.  The wind sock is due to be replaced by an airplane model soon. 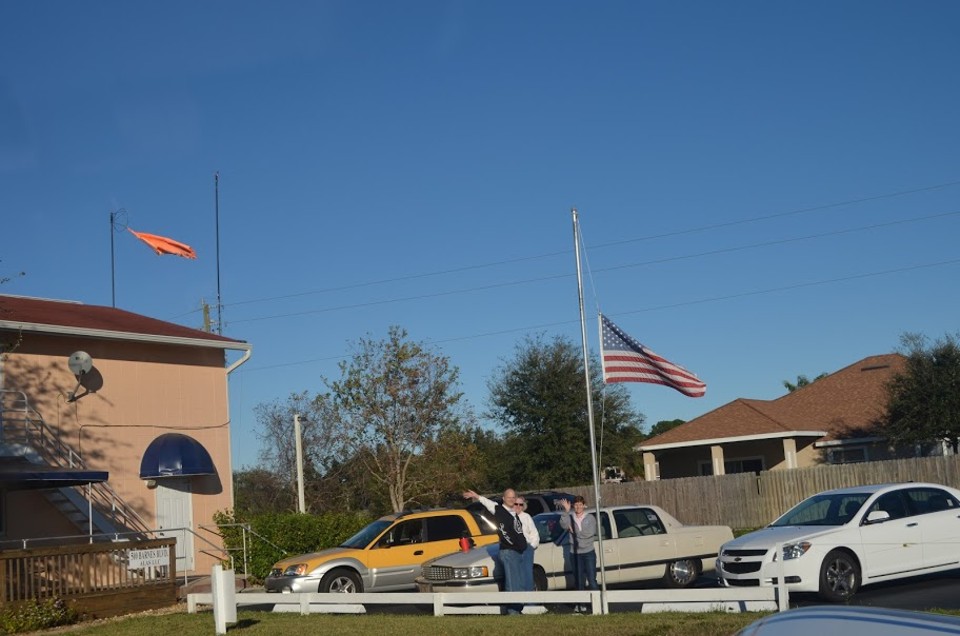 Ian quickly zoomed in on his mom, dad, and my wife with this photo, also aligned with the fence. 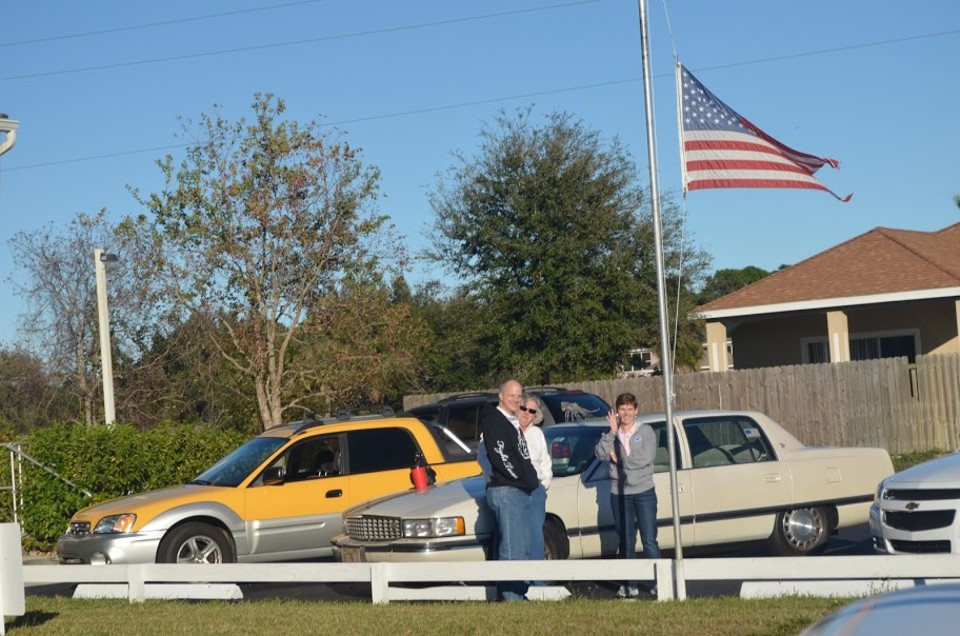 When I had parked the airplane in front of the hangar, my son took his camera to get this photo of Ian looking at something I pointed out on the Orlando Terminal Area Chart we used for today's flight.  You can see bit of my sunglasses behind the roll bar and fairing and my left thumb turning off the noise cancelling circuit in my headphones. 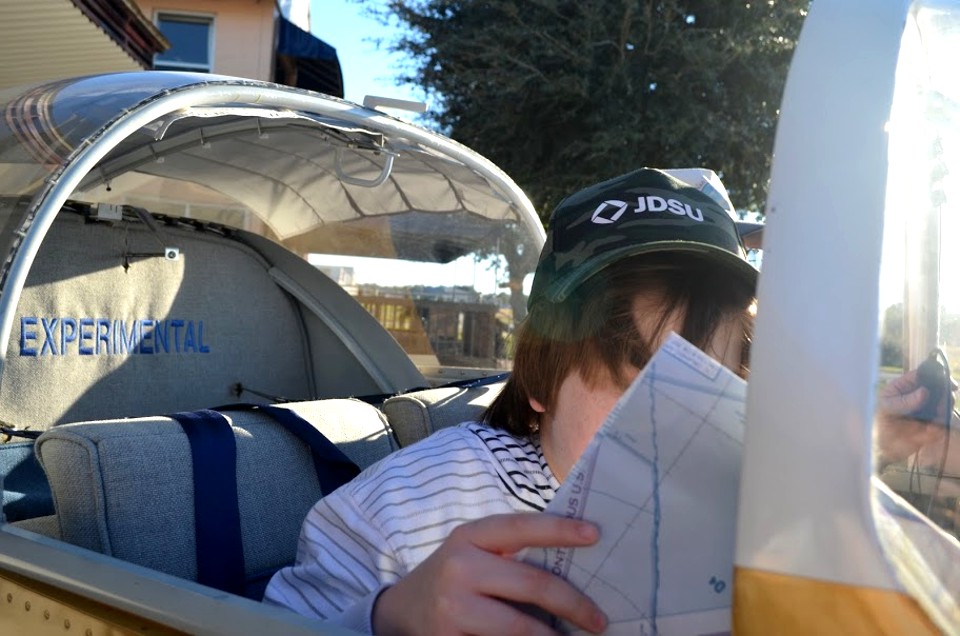 He was very interested in the various elements of the chart and how the controlled air space vertical limits are shown. 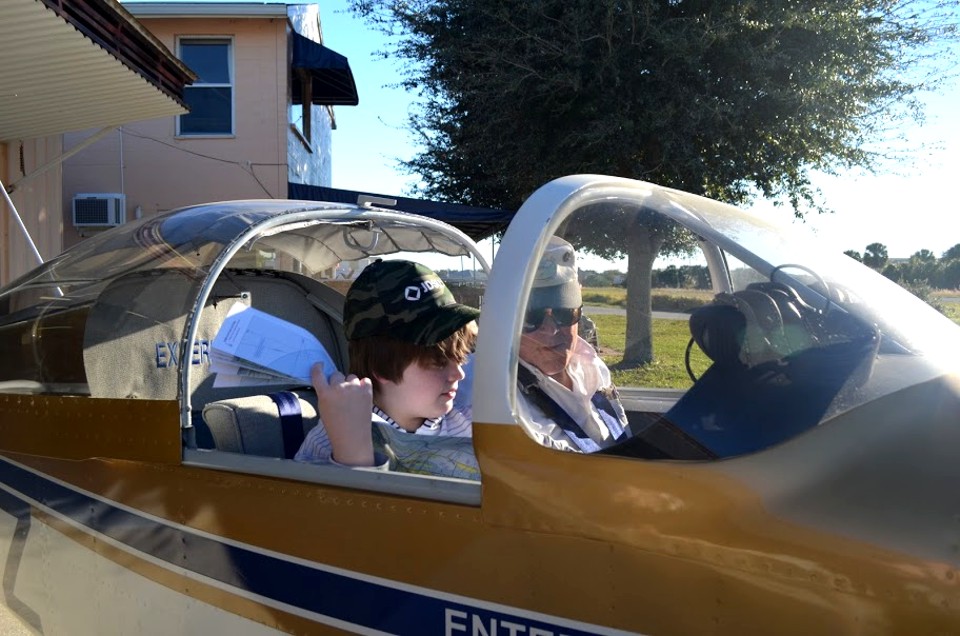 I gave him the JDSU camouflage hat to remember the day.  I took this photo with my camera before putting the airplane away.  He used his father's Nikon camera to take all the photos during our flight.  My son posted those photos online that were downloaded on December 31, 2012.  I spent this day off from my day job to edit the photos and post them on new web pages. 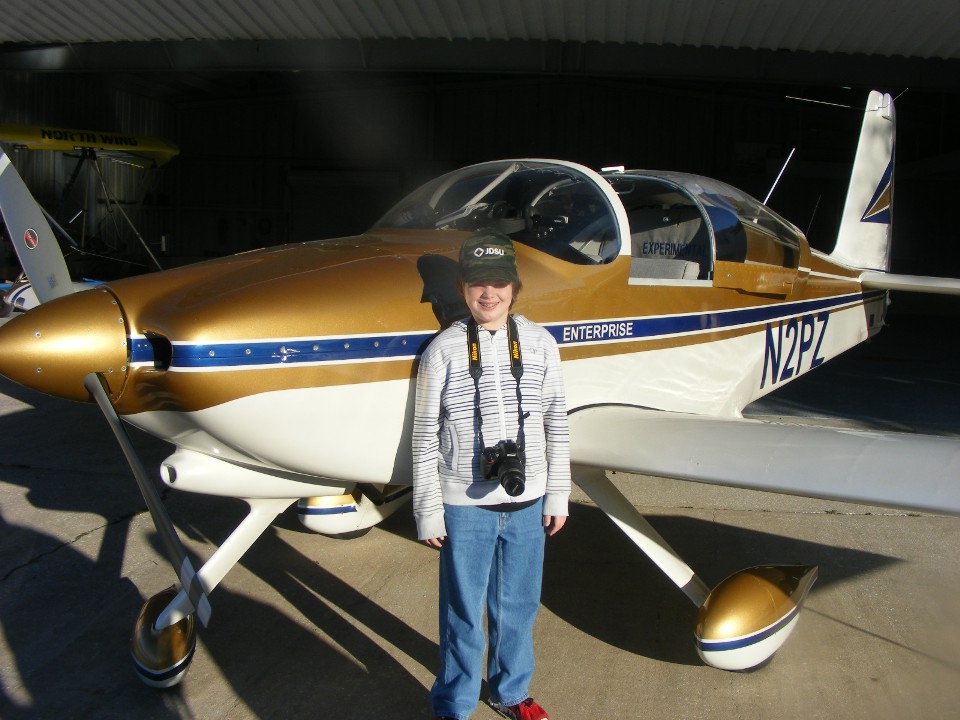 I made it a point to tell him about everything I was doing during the flight and he seemed to understand the equipment and the aeronautical chart I was using to show him how this area outside the airplane was depicted on the chart.  I demonstrated winds aloft and GPS ground speed going into the wind and getting a "free ride" with the wind during the return.  It was a good day to fly and a smooth landing.  The Hobbs meter received only 0.5 hours today.  Edward looks on as I begin to connect the tow bar to the nosewheel fork. 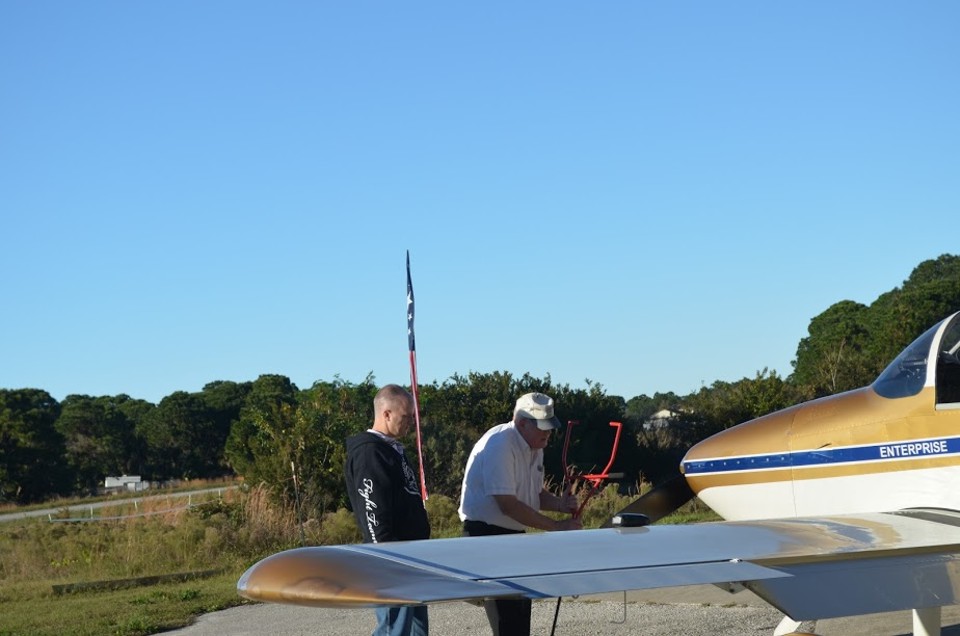 The attachment of the tow bar is also how the airplane is steered as it pushed into the hangar.  Edward is ready to help push on the wing and watch my clearance from the side of the hangar door opening. 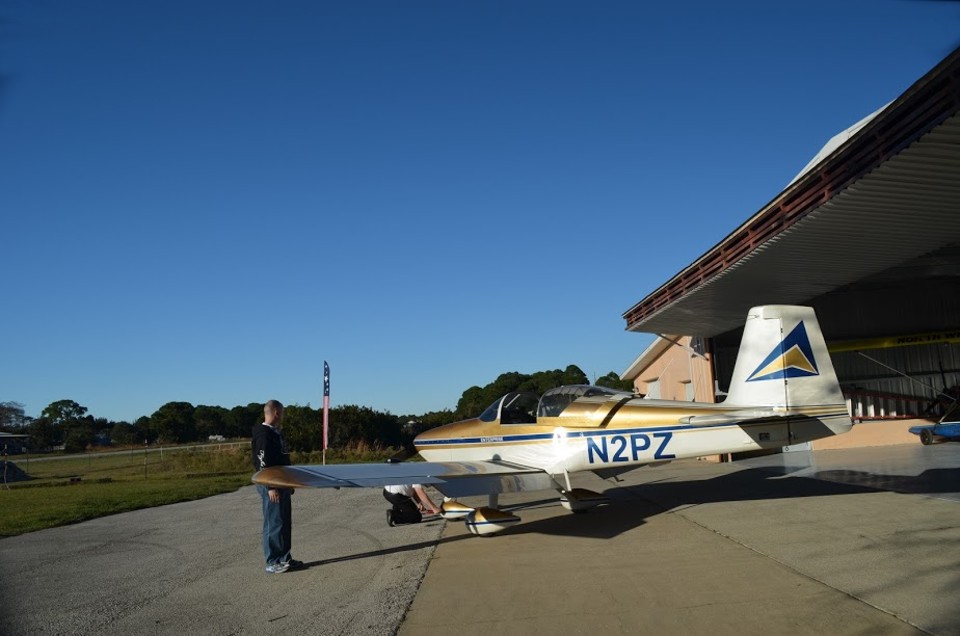 When the airplane is parked in the proper location, the tow bar is removed and placed nearby. 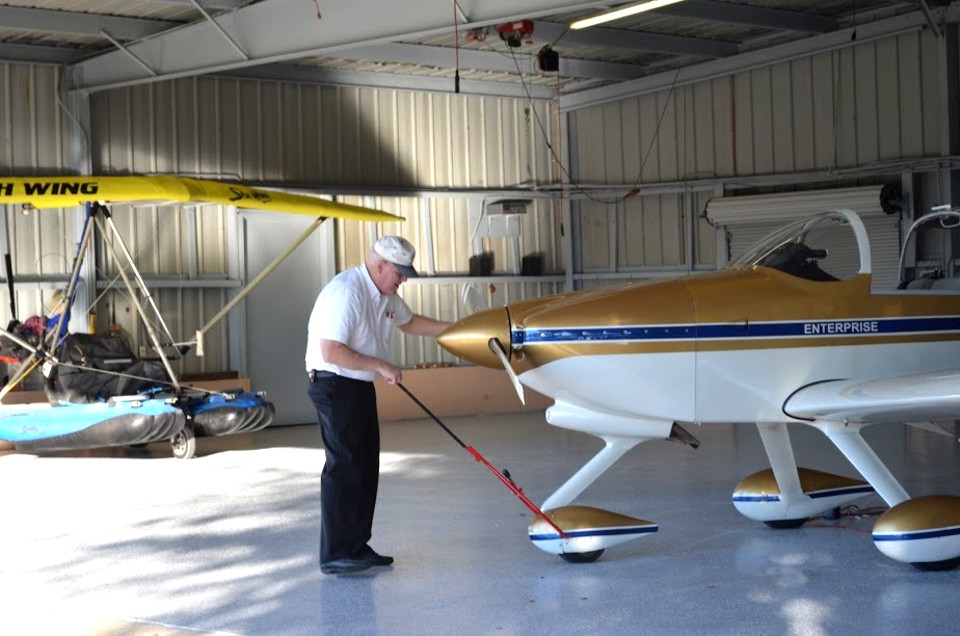 The battery trickle charger is connected to the 12-volt accessory outlet on the right side of the instrument panel.  After this is done, I do a walk around the airplane to be sure the carburetor heat door is closed and the pitot tube cover is in place.  This photo shows that the RED pitot cover has not yet been installed. 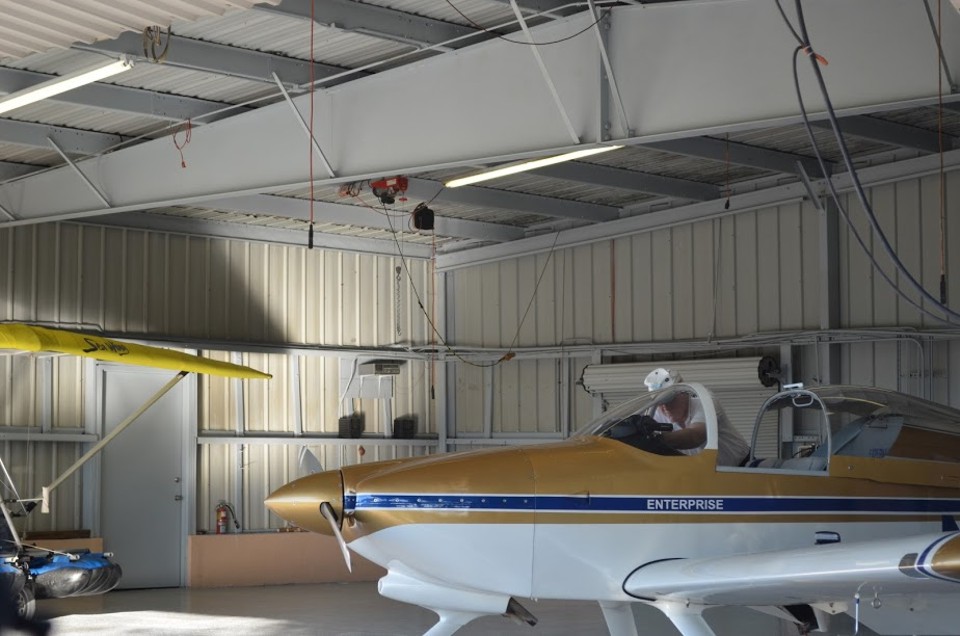 The last thing to do is say goodbye to my son and his family as they will get on Interstate 95 and head to her parents home near Lady Lake, Florida for the remaining few days of their Christmas Vacation.  That is Ian's mom Julie hugging my wife at the right side of the photo. 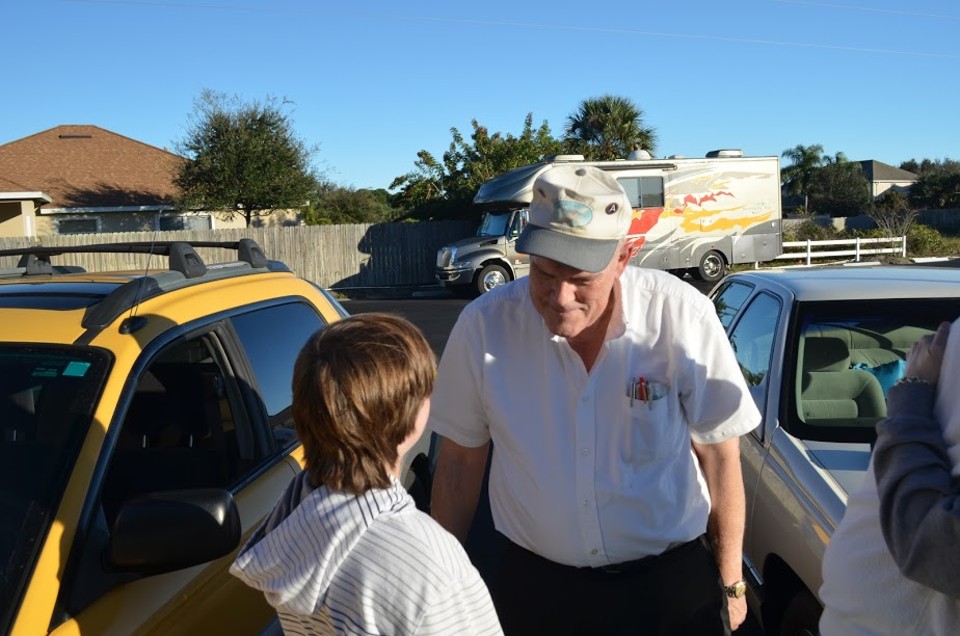 Edward takes my photo as I speak to him before getting my traditional embrace before we part company again. 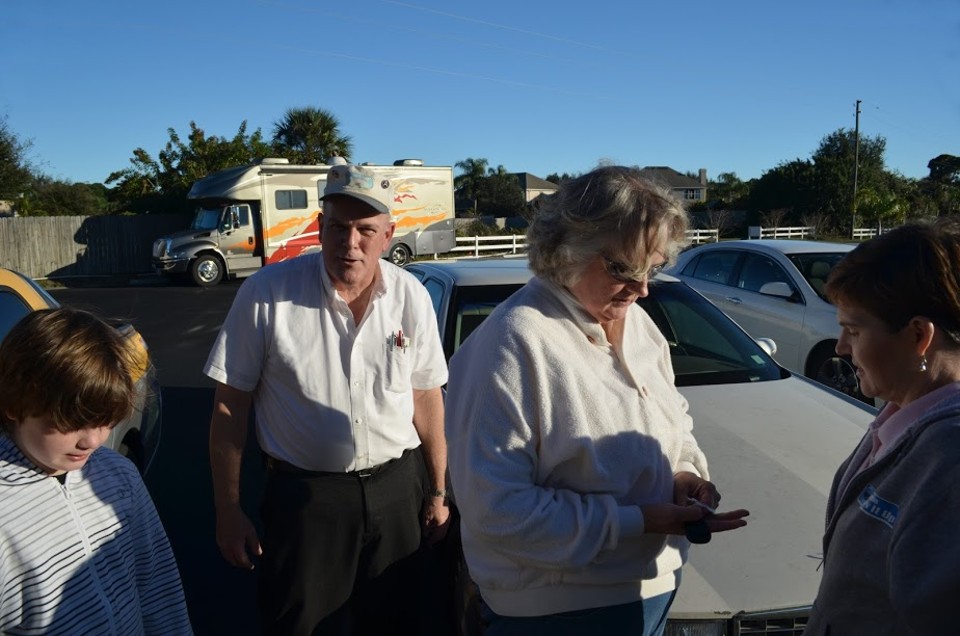 A good first flight with your grandson beats any other kind of day.  And yes, my back was stiff that day, but I am standing taller as the effects from my sciatica have subsided in the past nine days since this photo was taken on December 22, 2012.