January 26, 2013: I had another two-week road trip this month.  The rental car ride began with a familiar route to Tennessee on Saturday, January 12 up to the Atlanta area.  I spent the night with my youngest son and continued my trip to my first stop the next day.  Two days of sales meetings began the week with customer calls on Wednesday in Charlotte, NC and Greenville, SC.   Due to approaching winter weather, I hurried up to Christiansburg, Virginia that evening to pick up some company demo equipment for use in additional customer meetings for the remainder of the week.  I stayed north of the bad weather and had good customer business meetings on Friday in Pennsylvania.  I met up with a good friend I took flying in 2005 during my first LONG cross country trip in my airplane to Oshkosh, the Great Lakes, New Jersey, New England, and back to Tennessee.  Dale and I had a flying day trip on July 30, 2005 from NJ to Rhode Island that is documented in this web site.

The remainder of my trip in the second week began in the Philadelphia area with two customer visits on Monday.  I light snowfall came down Monday evening which I swept off the rental car before it froze up solid that night.  The meeting I had in West Chester early in the morning was good and the roads were clear for the ride down to my afternoon sales meeting in Lanham, Maryland.  The Wednesday morning meeting was over near Dulles Airport in Northern Virginia.  I had two options for a Wednesday afternoon meeting and both had other issues that prevented an afternoon sales meeting.   A new winter weather warning for Central Virginia was in the forecast.  I hoped to have a meeting back in Charlotte the next day and I wanted to get out of the mountains and into North Carolina by Wednesday night.  I had some time to "office hours" in the hotel Thursday morning in Elkin, NC.  The meeting for Thursday afternoon was not going to happen and the meeting I hoped to have in Atlanta on Friday was not going to happen.  The forecast was for an ice storm in North Carolina as I headed for Florida at about 2:40 PM from Charlotte.  I got home at 11:45 PM on Thursday night.  Friday was office hours at home and turning in the rental car that took me 3056 miles during my travels with my company demo equipment used in all my business meetings.

Now to the good stuff.  I had a Saturday morning chore to change the electric door lock servo on my wife's car, then I went out to the airport to check on my airplane on a beautiful sunny day in Central Florida.  A short flight to exercise the engine was definitely in the cards for this afternoon.  With Merritt Island Airport (KCOI) nearby, a touch-and-go and flying the traffic pattern there with other airplanes is will keep my skills sharp.  There were at least three other airplanes in the pattern when I flew over the top at 2,000 feet MSL.  After that I flew west over the mainland and opened up the throttle to cruising speeds and noticed a 5 MPH wind from the north as I headed back to Rockledge Airport (21FA).  Interstate highway 95 has this big turn down there with an exit about 1 mile west of Rockledge Airport.  It is a convenient landmark to set up for an approach to runway 36 at the airport. 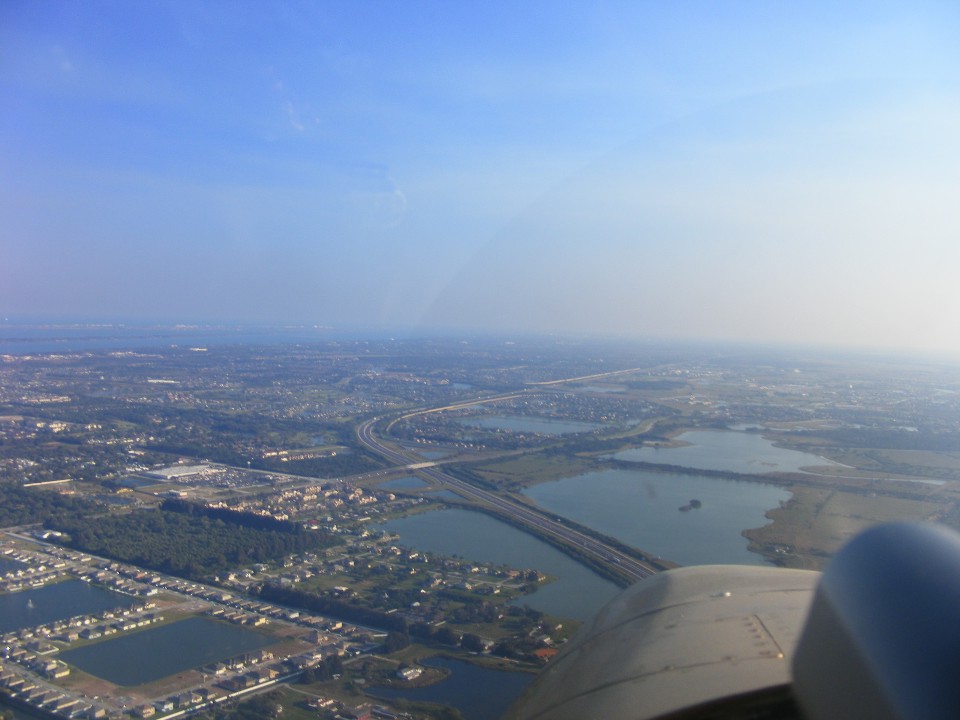 Here is a shot of the airport and the area to the south as I setup my approach to the 2000-foot runway 36.  That is Murrell Road running parallel to the runway at the airport.  The town of Rockledge is in this photo with the Viera district of Melbourne behind me.  That is the Indian River between the mainland and Merritt Island near the horizon in the top of the photo.  US highway 1 is near the river on the mainland.  All these ponds are man-made to provide fill dirt for the housing areas and drainage runoff from them.  With sandy soil here at the east cost of Florida, the rain water soaks down to the Florida aquifer or is managed by canals and creeks running to the Indian River.  With this much water around, a pilot on approach to a runway has to be vigilant for the birds that live near all that water and food sources (fish). 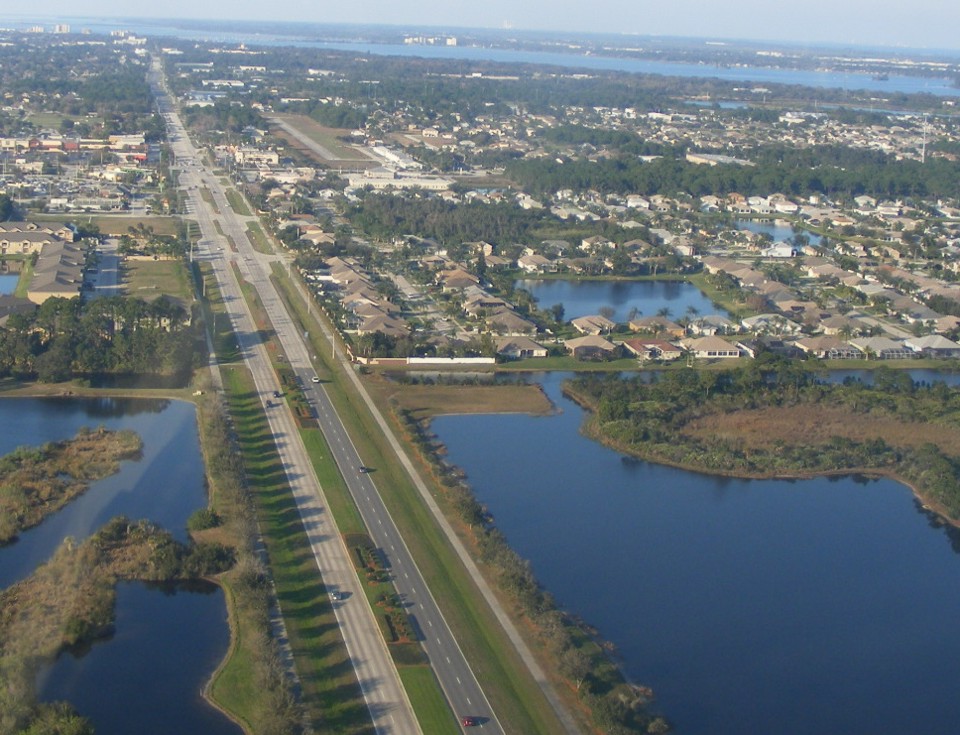 Here is the photo I have wanted to take since I moved the airplane and me to Florida from Tennessee.  I still need to take a video of a landing here at Rockledge on the 2000-foot paved runway.  The runway is displaced north from Barnes Road and the few light poles in the parking lot south of Barnes.  This kind of displaced threshold is what I faced when I was landing from the north at Folks Field for seven years.  With no VASI lights here, the skill of the pilot are used to judge the descent angle (glide slope) to the runway.  I need to practice some power-off gliding approaches here. 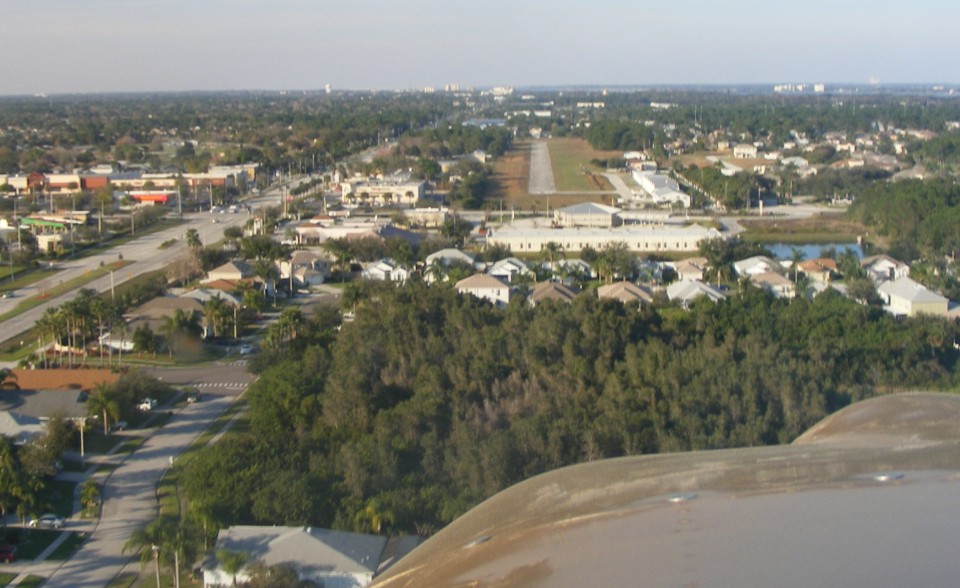 The Hobbs meter indicated 0.5 hours for today's flight which brings the total to 341.3 hours for the Enterprise.

February 16, 2013:  This Saturday morning had high cirrus clouds over central Florida and winds at ground level of about 12 MPH from the west when I got in a short flight this morning.  A cold front moved in later in the day and the winds were gusting to around 30 MPH when I went outside at home around 4 PM today.

I made a short trip down to Valkaria Airport south of Melbourne and discovered one runway closed for maintenance and some crazy back taxi action on the paved apron of runway 10-28.  The pilots working the pattern were taking off and landing downwind.   I decided not to land or even do a touch and go on runway 10.  I crossed over mid-field at Melbourne well above their Class D airspace going both ways and advised the tower on my southbound flyover so they knew I was monitoring their frequency.  One airplane crossed over about 1,000 feet above me at that time.

The ride back to Rockledge Airport was easy going northwest into the head wind and saving fuel at a lower throttle setting.  I took a couple of photos looking toward Patrick AFB from just outside their Class D boundary while cruising at 3,000 feet MSL.  It was a bit hazy today and I had to do some contrast enhancement of these two photos.  I noticed my current neighborhood was visible in this photo and marked the street.  You get a good view of US 1 running parallel to the Indian River.   Merritt Island is very thin at this point.  That is Pineda Causeway going from the mainland over to the air base at the beach.  The haze layer was low today as you can see in this first photo looking north. 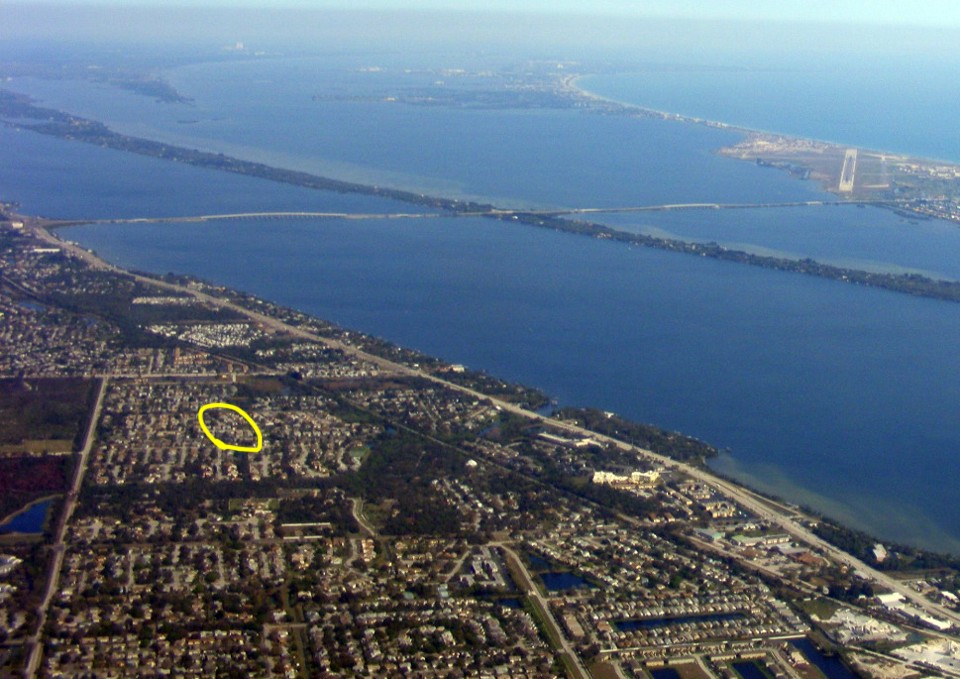 This shot is from a bit closer since I was not sure the first one would process the haze reduction as well as it did.  I pushed the zoom lens and still got a good photo from over five miles away. 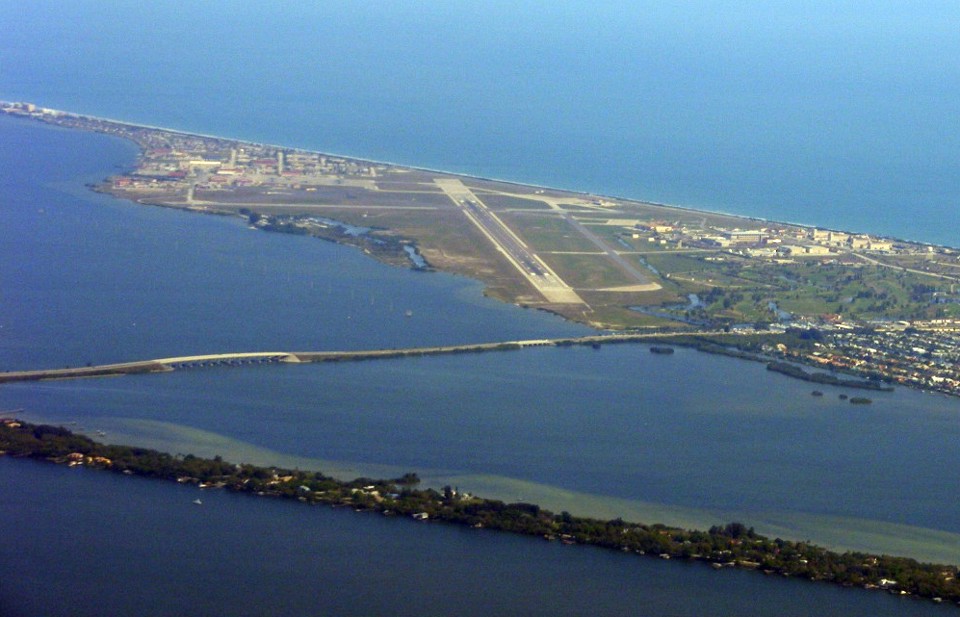 I was crabbing into the crosswind on approach back at Rockledge.  I was not about to try to get another photo on final.  The 0.7 hours today leaves the Hobbs meter at 342.0 hours.  It was about 62 degrees Fahrenheit at ground level and there were no bugs to clean off the airplane after the flight.

I have one bit of news about the Van's Aircraft new web site to post here.   I was checking their archives to see they have put back the web pages about Jon Johanson from Australia.  I met him at Van's Saturday night banquet at the close of Oshkosh Airventure 2004.  I have updated my web page to correct a previously broken web link.

I also sent in my cardiac stress test documents last week to renew my medical certificate.  The test went well and cost a lot less than last year.  I also received the registration for the airplane.  This is my first one with the new three-year registration limit.

March 26, 2013:  This is the day 20 years ago I had my private pilot check ride and received my "license to learn" with every flight since then.  My most recent flight was this past Saturday for a short test hop near the Rockledge Airport.  More about that later.  I got an email from a web site fan and pilot who asked for some updates to this web site.  So here it is...

The month of March started with a road trip to Birmingham, Alabama on Sunday March 3rd.  I had two short meetings in Birmingham on Monday morning and one meeting in Huntsville in the afternoon.  I was trying for another meeting in Huntsville for Tuesday morning which did not work out.  I went over to Chattanooga in the afternoon and had a barbecue dinner with Wendell before heading up to Vonore, Tennessee for a company meeting on Wednesday.  I headed for Atlanta Wednesday evening hoping to have one of two possible customer meetings on Thursday.  Neither client had time to see me in the Atlanta area.  I headed down to Jacksonville, Florida for a Friday morning meeting that worked out well and I headed home to Melbourne that afternoon.

The next road trip began on Saturday, March 16 to spend the night in Dillon, South Carolina.  The next day was the remainder of the trip to Horsham, PA where I would see our largest distributor on Monday, March 18.  I was there to train a new employee on fiber optic products from the company that pays my salary.  After lunch I headed for Baltimore and Washington, DC.  The 2013 Satellite Show was exhibiting Tuesday through Thursday at the convention center in the city.  I attended for two days to support one of our distributors and meet potential clients.  One of our distributors had a booth at the show. 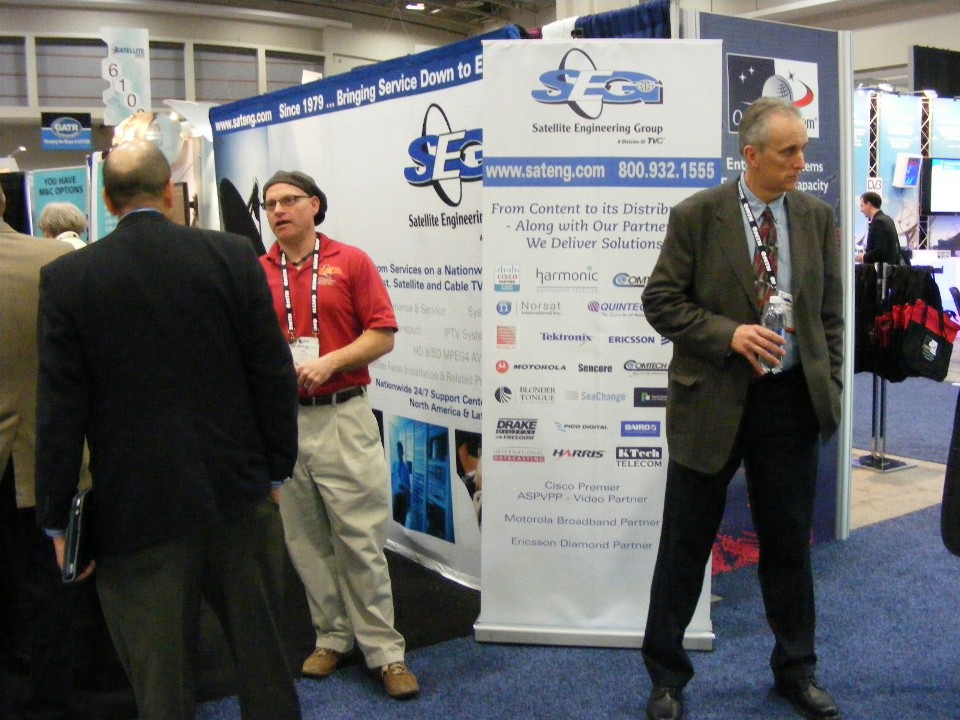 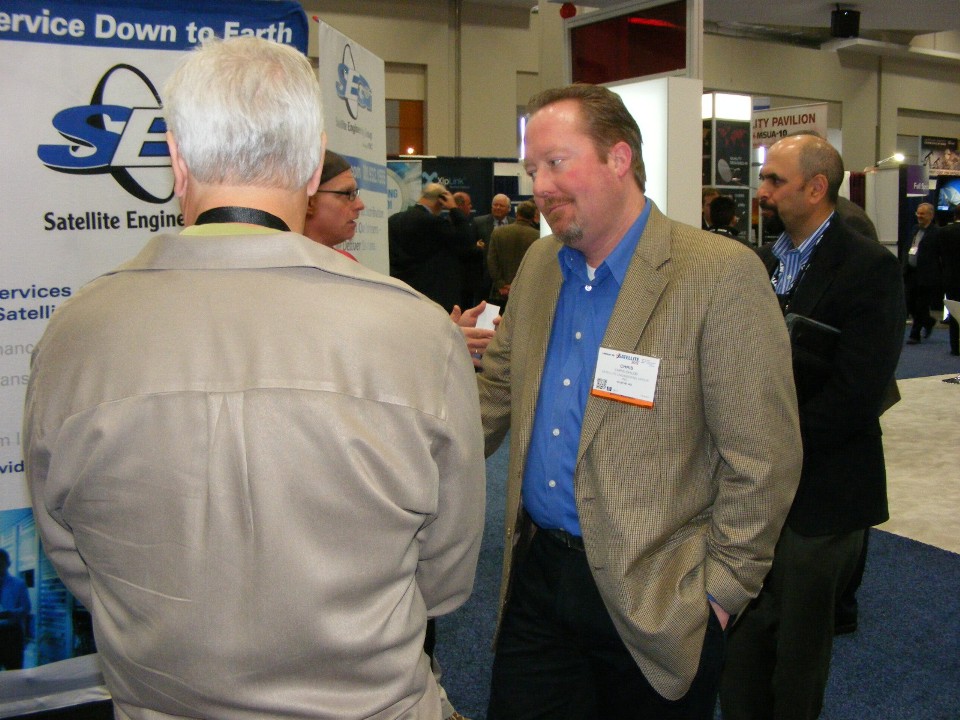 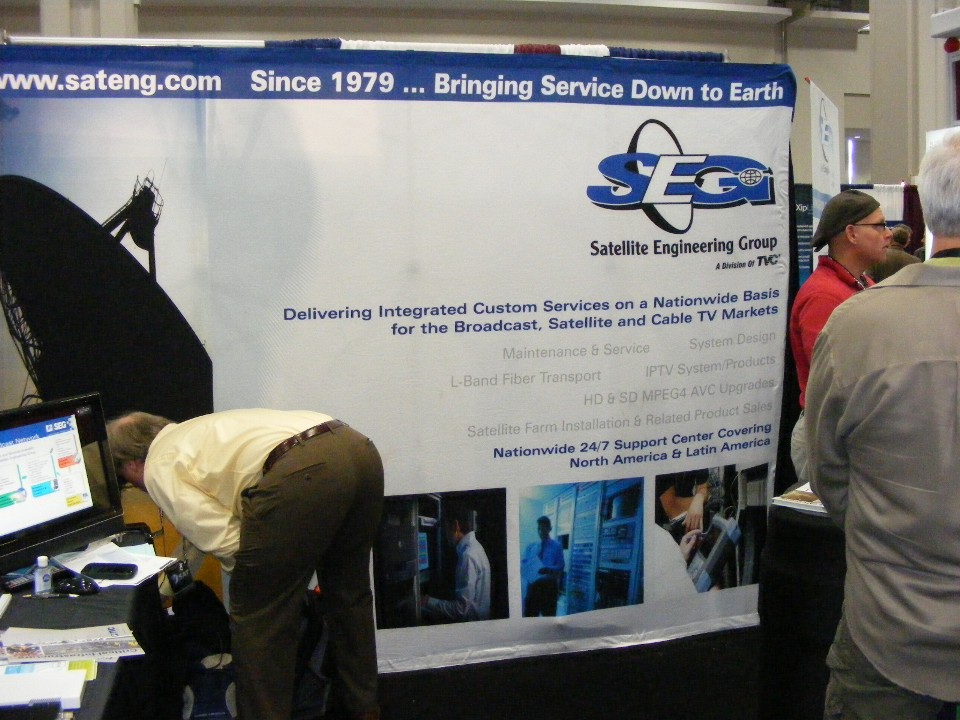 With the switch to daylight savings time, there was time after leaving the trade show to take a few pictures on the mall in DC.  I took this photo looking EAST toward the US Capitol Building from the walkway in front of the Air & Space Museum. 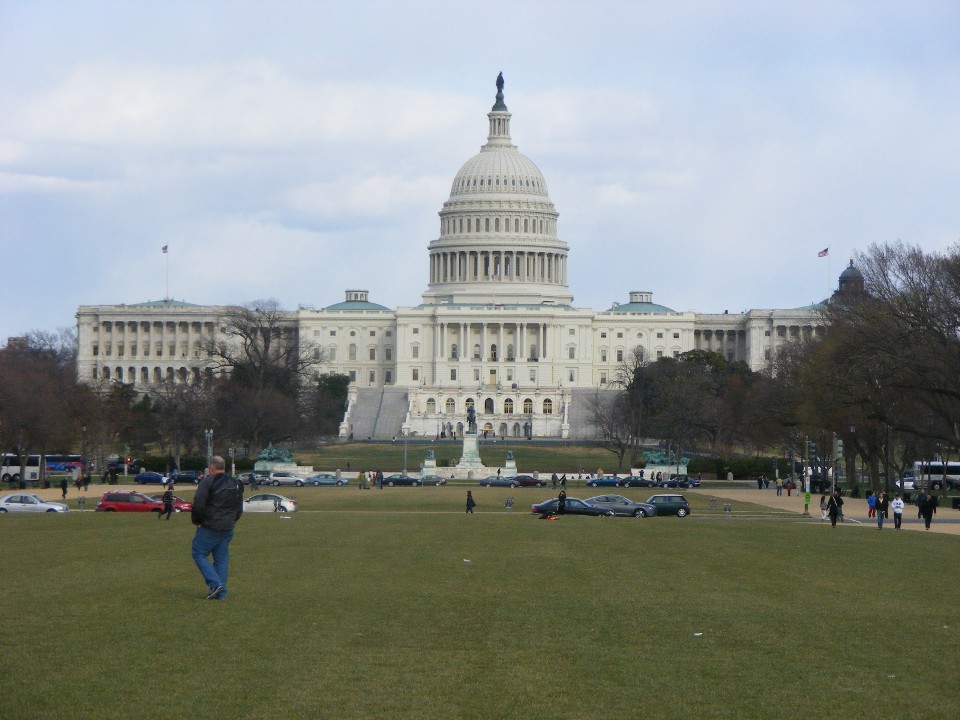 The Washington Monument is getting some work done to preserve it.  The scaffolding is clearly visible rising from the base of the monolith.  The cloudy weather made for poor lighting of the surrounding area while looking WEST. 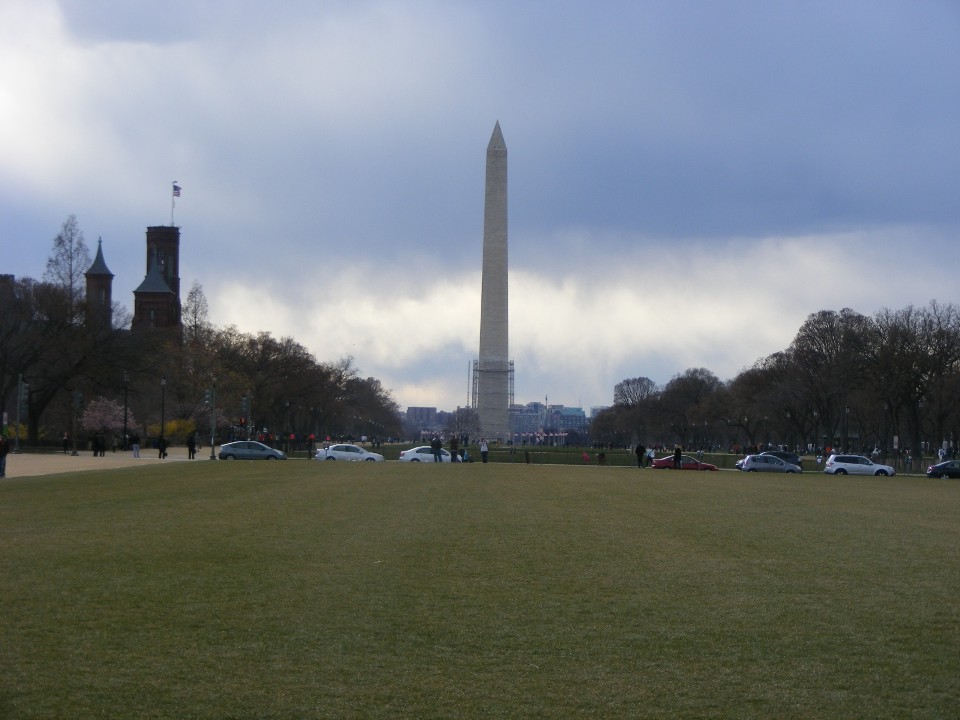 Here is the front of the Air & Space Museum, also suffering from a lack of sun light.  The main entrance is hidden due to contrast issues while looking SOUTH. 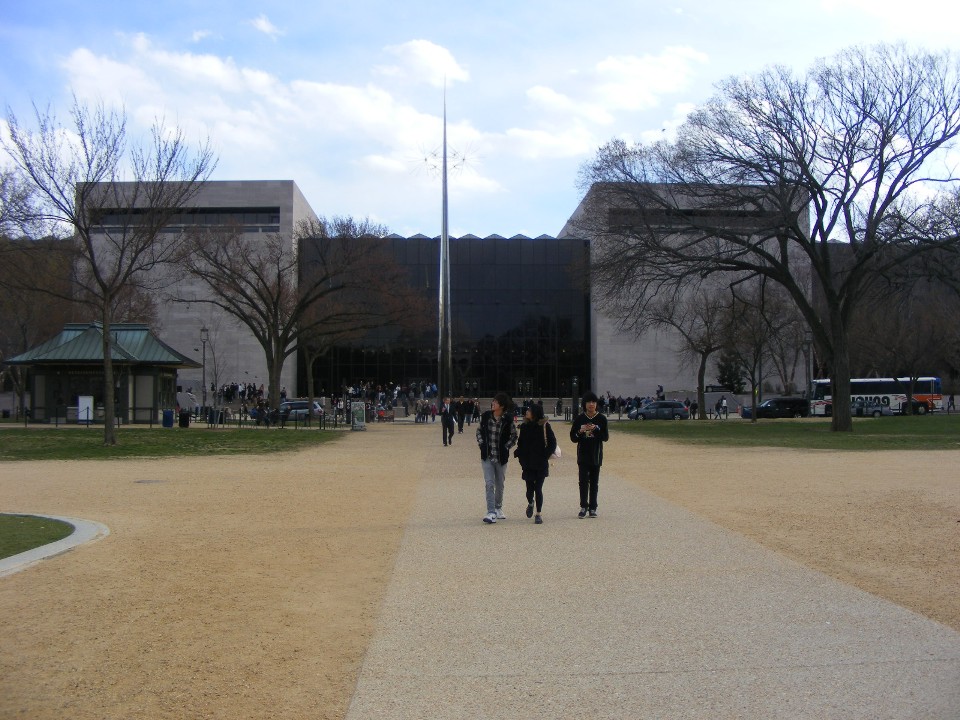 I walked NORTH on 7th Street to the US Archives to take this photo near the subway Metro entrance at Pennsylvania Avenue.  There are two permanent exhibits here that created our country.  They are the Declaration of Independence from England in 1776, and the Constitution of the United States that changed the 13 colonies into the democracy our country became in 1789 when it was ratified by the state legislatures. 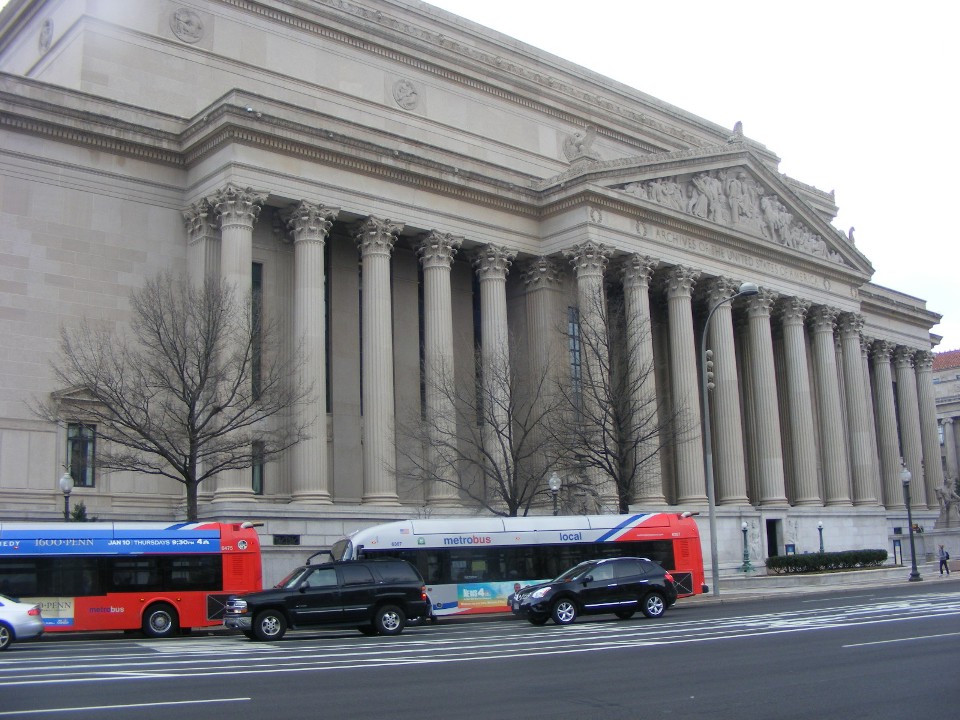 The buildings near the archives are a mixture of old and new as seen here. 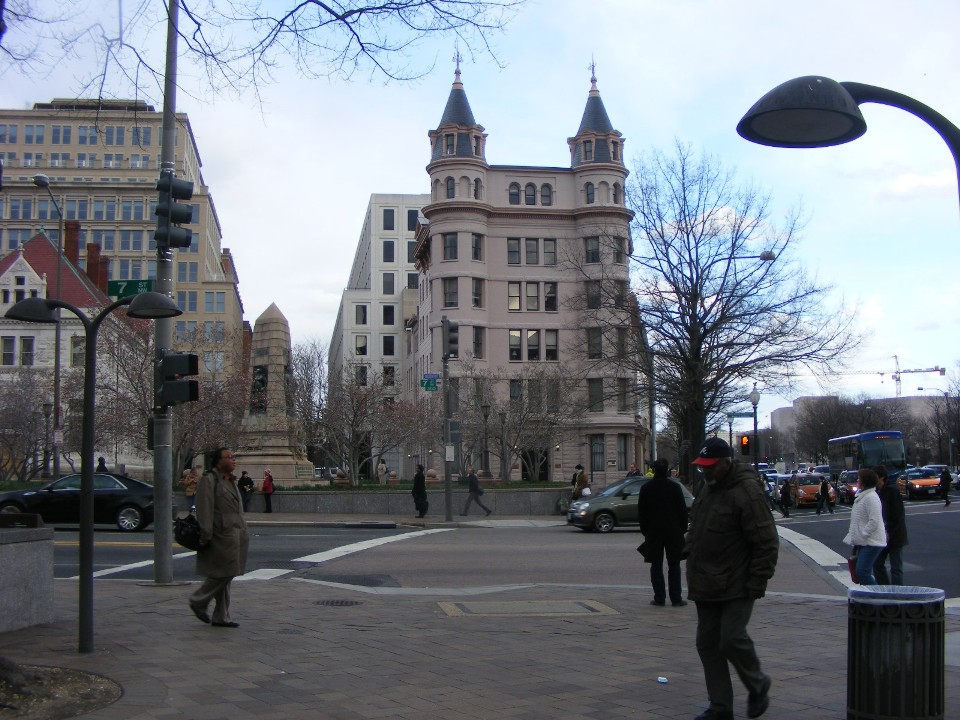 This view is looking at The US Navy Memorial across from the archives on the north side of Pennsylvania Avenue. 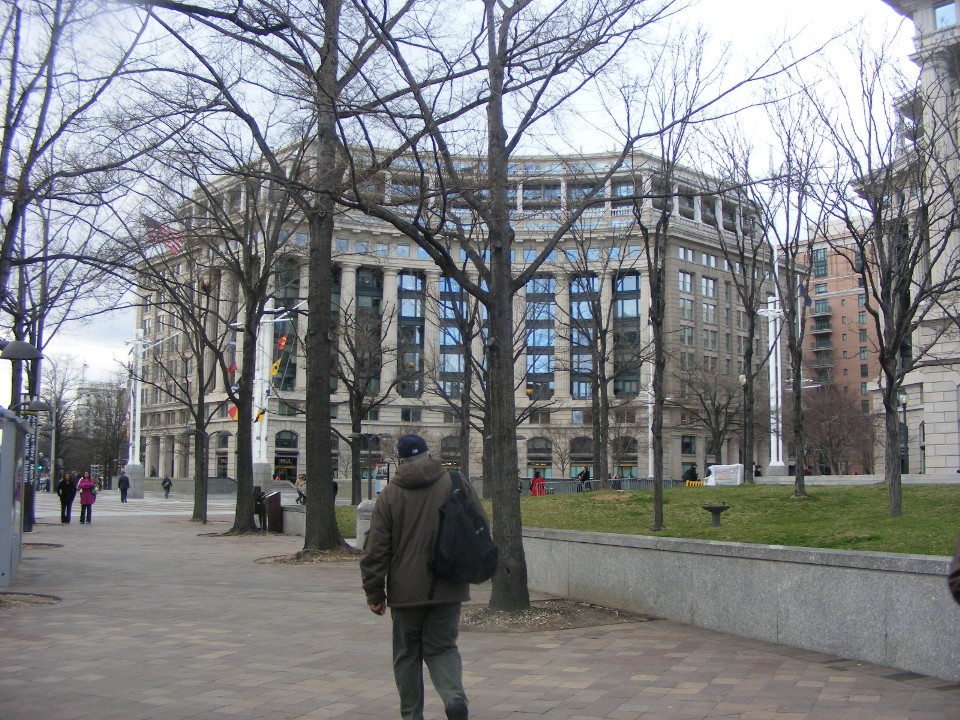