December 18, 2012: The Texas trip with stops in Alabama ended this evening.  The start of the road trip was Monday, December 3rd in with two stops in Jacksonville, Florida for sales training meetings and a motel in Tallahassee, Florida.  Tuesday morning had two more meetings and a short friendly customer meeting in Tallahassee and ended with two more meetings in Pensacola, Florida.   Wednesday morning had some office hours in the motel at Pensacola.  None of the three customers in Mobile, Alabama or in Baton Rouge or New Orleans, Louisiana were available.  That day was mostly travel to Houston, Texas with a short tourist stop at the USS Alabama Battleship Memorial Park.  Thursday had three meetings in Houston with travel to San Antonio that evening.  Friday, December 7, 2012 had two meetings in San Antonio and one near Austin, Texas where I spent that Friday night and Saturday night with my son Edward and his family before going to Dallas - Fort Worth on Sunday, December 9, 2012.

The job at the DFW Airport took up parts of each day, from Monday to Thursday, December 10-13.  One meeting with a consultant was held in Dallas late Wednesday afternoon.  A contractor and a distributor were the two meetings I had on Thursday morning.  I finished the installation training on our fiber optic equipment at the airport Thursday afternoon and traveled to a motel at Malvern, Arkansas that night.   I had a Friday morning sales meeting in Little Rock, Arkansas and another Friday afternoon in Memphis, Tennessee.  I drove across northern Mississippi and got a motel at the junction of US 72 and Interstate 65 near Athens, Alabama.  I took some time off at Huntsville, Alabama to meet some pilot friends as seen on the previous page.   Sunday, December 16 was a rainy day with travel to Birmingham, Alabama.

Monday, December 17 had two meetings in Birmingham before heading for Montgomery, Alabama for dinner and a motel in Dothan, Alabama on Tuesday morning.  I headed for home with a stop for lunch in Marianna, Florida and took these two photos of the Comcast Cable headend site I had selected during my job with Comcast from 1990-1992.   My red Ford Taurus rental car is parked near the gate to the site.  The building has all the satellite receivers and television modulators for every channel on the system. 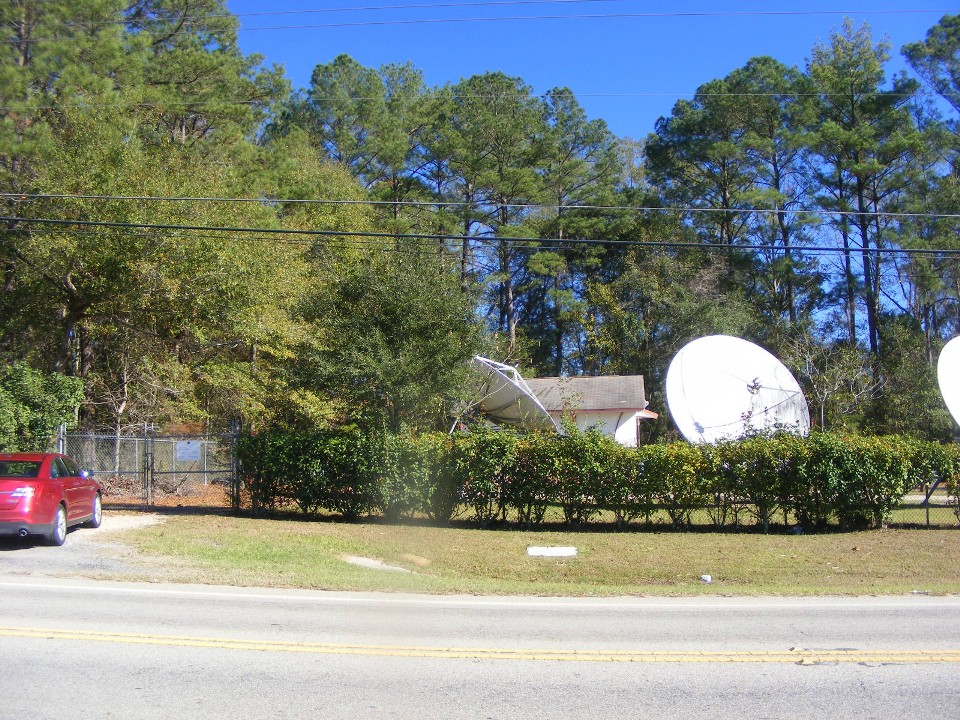 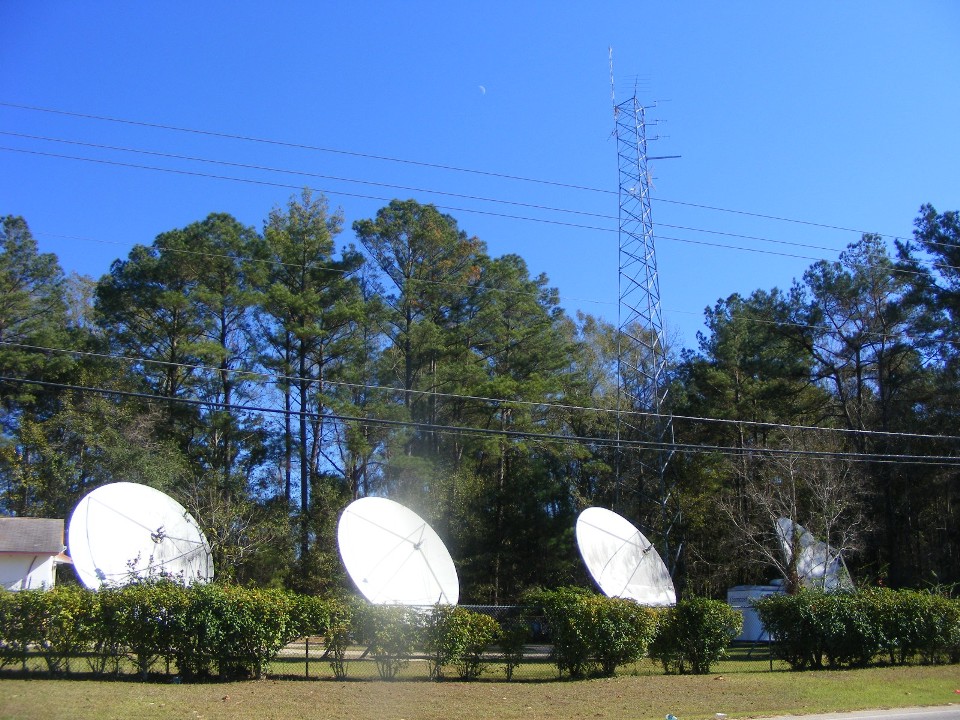 Tuesday afternoon and evening I traveled Interstate 10 to Jacksonville and stopped in Ormond Beach, Florida for a light snack for dinner and arrived home about 90-minutes later at 8:20 PM.  The 16-day road trip covered 3,306 miles with 19 different customer sales and training meetings, and three days work at the DFW Airport on the fiber optic system for television and satellite signal distribution.

The rest of the week was my usual office hours at home on the phone and finishing up my expense reports for the trip and the portion that was charged along with my daily rate for on-site service and training. 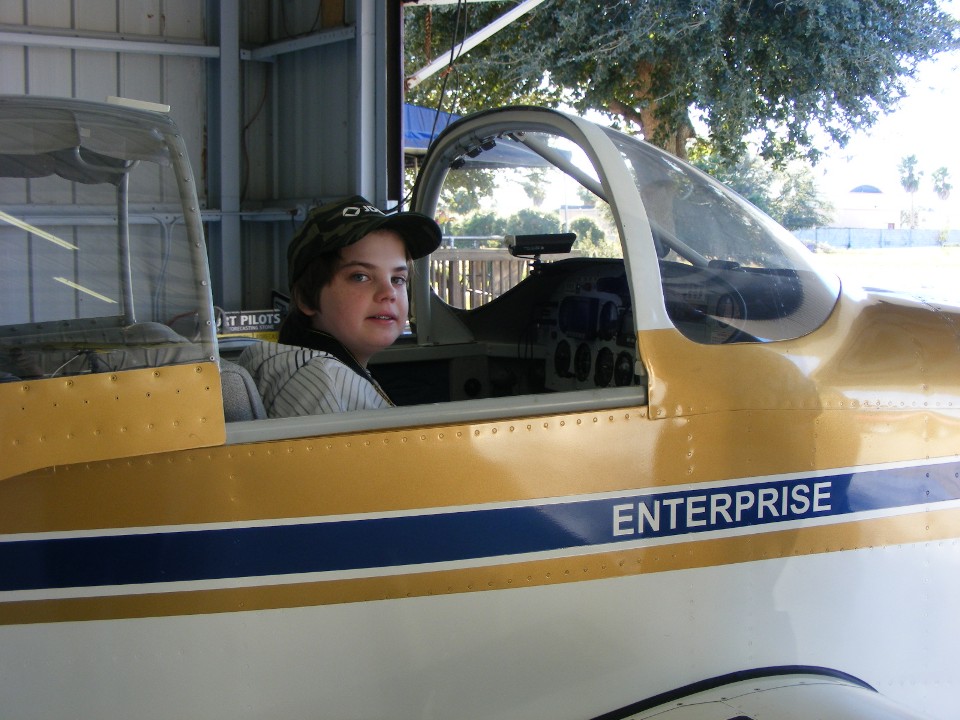 My son Edward took some photos before giving his camera to Ian to take some aerial photos while I was flying the local tour.  I am showing Ian the instruments in the panel and explaining the importance of each one for a safe flight. 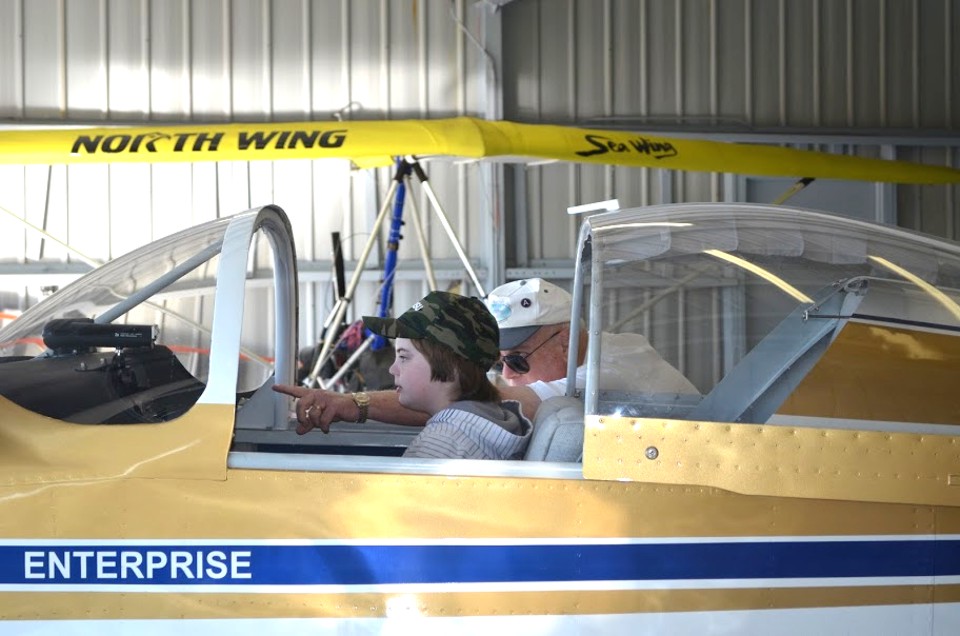 I was unaware these photos were being taken as you can see by my concentration of the details of each instrument.  That round pin in my hat with the white A is the Third US Army pin I wore on my army cap when I was on active duty at Fort McPherson, Georgia in 1970-1971. 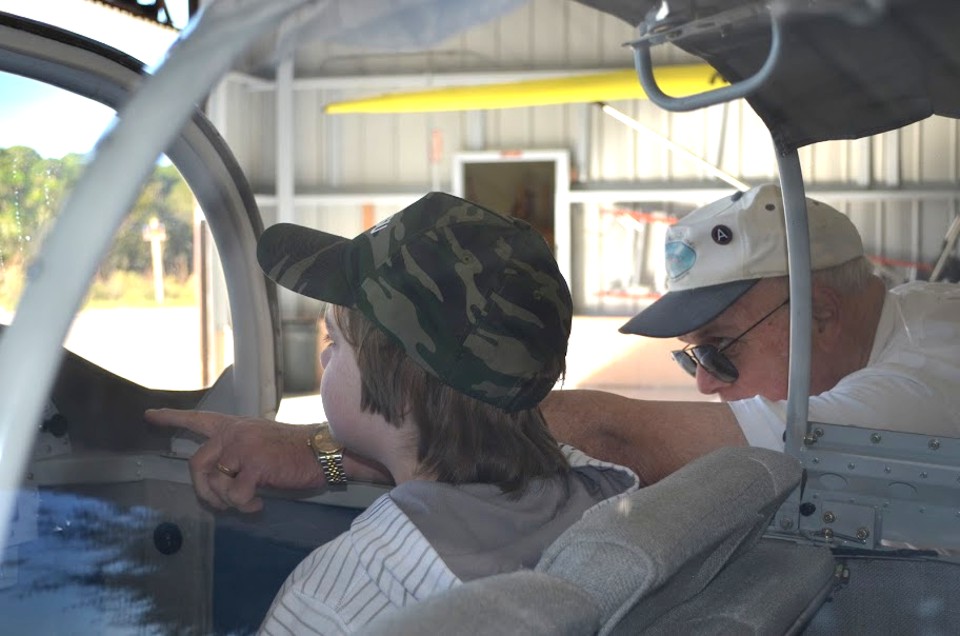 Ian began taking photos right after take off from the Rockledge Airport.   The Indian River is the large body of water crossing from left to right in the photo with Merritt Island on the other side of the river.  That is man-made water retention pond with a "peninsula" in the lower right quadrant of the photo.   This photo was snapped while I was still on a runway heading during the climb to pattern altitude and above. 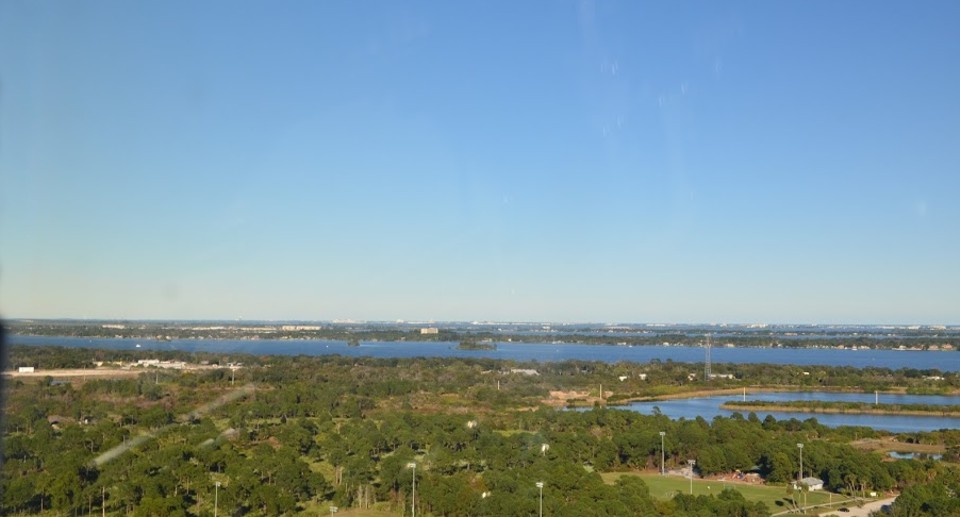 Here is the map from the southern end of our flight from Rockledge Air Park.   I turned a bit northeast to give Ian a view of the nearby Merritt Island Airport and pointed to an airplane flying in the pattern near that airport. 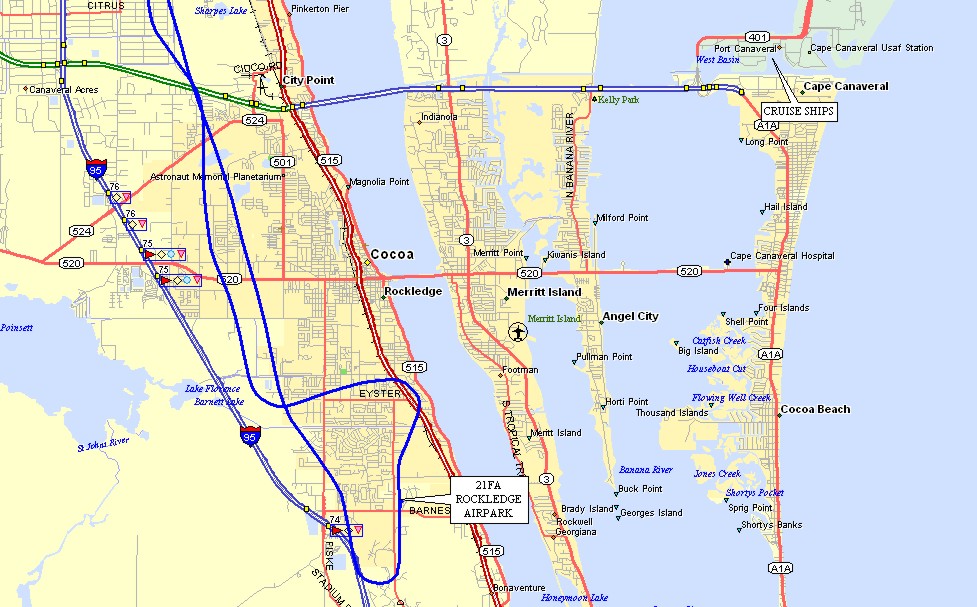 I turned to a westerly heading to avoid the Merritt Island Airspace and climb up to 2,500 feet for the rest of the tour.  Ian took this photo looking northwest toward Interstate 95 coming from the lower left quadrant of the picture going diagonally to the right before disappearing behind some trees ahead.  Those two rectangular water retention ponds in the lower right quadrant of the photo are just south of Florida state route 520 seen in the map above with the blue line of my GPS ground track. 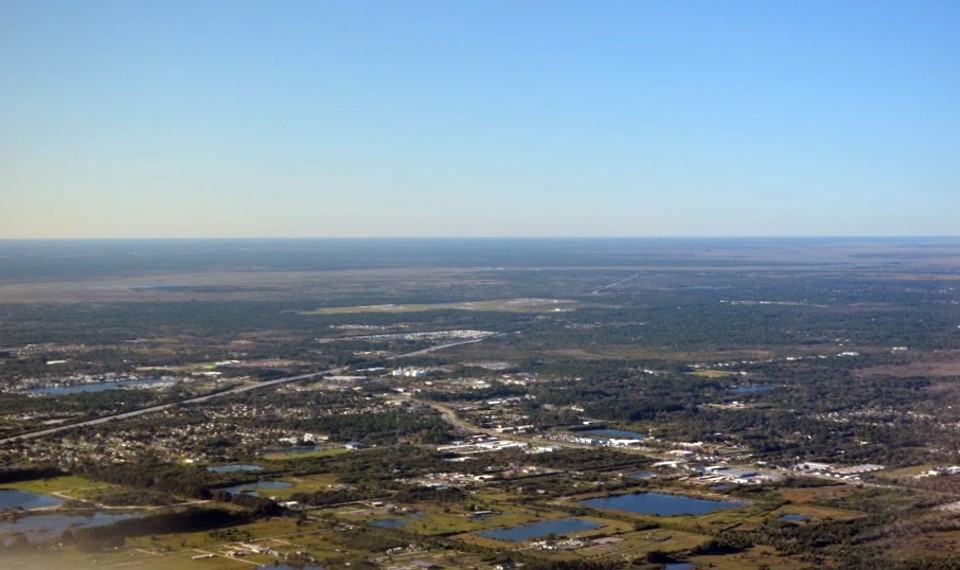 I was still on the westerly heading when Ian took this photo of Lake Poinsett ahead.  He pointed the camera through the right front of the windshield with the instrument panel in the lower left of the photo.  That is SR 520 heading west just to the right of the lake in this shot. 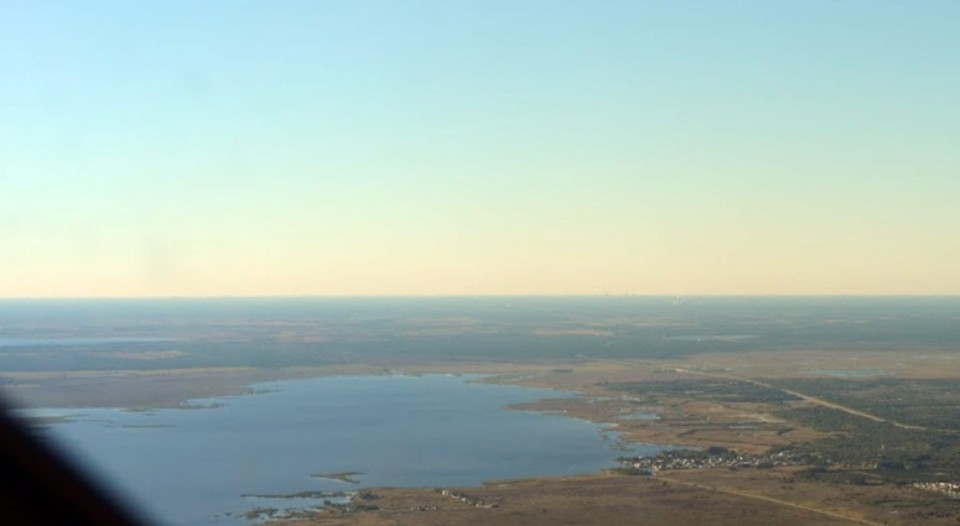 Ian pointed his camera due north for this photo of Cocoa, Florida.  That water retention pond with its odd shape is plainly visible when you look at the aerial photo of Sierra Lakes, Rockledge, Florida via Google Earth.  That causeway at the right edge of the photo is SR 528 heading for Cape Canaveral and Cocoa Beach to the east.   US Highway 1 is winding its way north on this side of the Indian River. 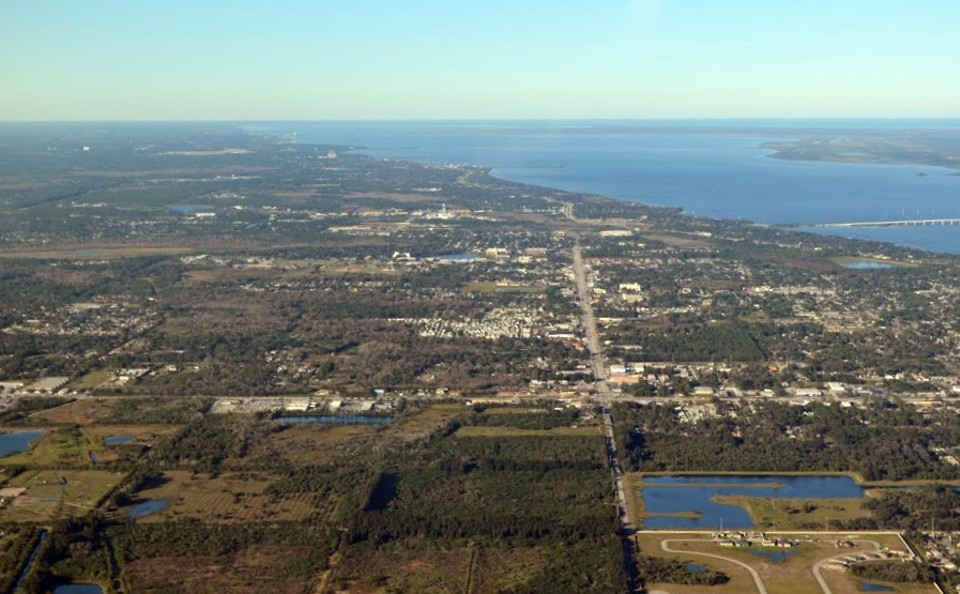 Here is a close up view of that causeway showing the cruise ship port near the end of the causeway at the Ocean.  That triangular bit of land out there is Cape Canaveral with a number of rocket launch facilities on it and Cape Canaveral Air Force Station with a runway. 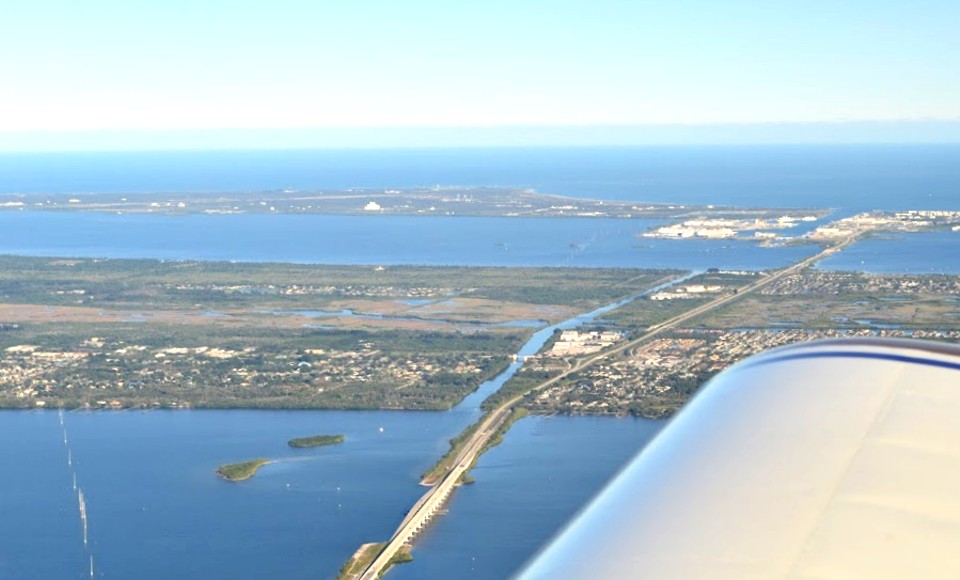 If you are interested, that is a power line and supporting white steel-reinforced concrete pilings holding the power lines above the Indian River at the bottom left corner of the above photo.