October 5, 2012:  This is the Friday I drove to Chattanooga in a rental car to bring my airplane to Florida.  I got on the road from Melbourne, Florida at 7:30 AM and changed from Interstate 95 to Interstate 10 in Jacksonville Florida by 10 AM.  The cloudy skies along the Florida coast were typical with more overcast conditions away from the ocean.  I stopped five miles inside Georgia on I-75 for lunch and fuel at 11:30 AM.  I was back on the road at 12:30 PM heading north under a completely overcast sky.  I got into some heavy traffic south of Atlanta.  The traffic moved well on I-75 after passing the I-675 split.  The Atlanta Braves and the Saint Louis Cardinals were having their first play-off game at Turner Field adjacent to the intersection of I-75 and I-20 in downtown Atlanta.  I decided to take the I-285 bypass around the west side of the city where traffic was moving well in my direction, but not so good for the folks going the other way.

There was another traffic jam before getting back on I-75 from I-285 on the north side of the city and for about 10 miles until I got past the I-575 split at Kennesaw, Georgia.  By the time I got to Wendell's home, it was 6:40 PM.  We unloaded the rental car and I took it to the National Car Rental office at the Chattanooga Airport.  The cost for the rental car for one day was $62.74.  It was full of fuel when I got it Thursday evening.  The fuel I put in the rental car totaled $74.71.  The total cost for the trip by car was $137.45 and that was way cheaper and less hassle than flying the airlines from Melbourne to Chattanooga.

Wendell and his wife Freda came to the airport baggage claim to pick me up and we went to the Cracker Barrel restaurant in East Ridge for southern food for dinner.   After we got back to his house, we grabbed a pair of five-gallon fuel cans and went down to the Lafayette, Georgia airport to buy 10 gallons of 100 low-lead AVGAS.  We put the fuel in the hangar and called it a night.

October 6, 2012:  This Saturday did not have the forecast weather I was expecting.  It was a very low and solid overcast day near Chattanooga, not suitable for VFR flying.  Pilot John Myers was having a fish-fry fly-in at his field down near Cedar Bluff, Alabama.  The weather radar looked much better for his location, but not getting there from here in my airplane.  I had been to his fall fly-in in the past as documented in these web pages.

It was the usual friends coming over to Folks Field this morning.  I cleaned up my airplane for the flight south, whenever the weather would permit.  It had the usual dust and dirt on it from insect activity in the rafters of the hangar.   I took this photo after the clean up was completed.  I poured five gallons of fuel into each of the fuel tanks.  The fuel gauge indicated 15 gallons total, enough for the flight to Hazlehurst, Georgia with the required 30-minute flying reserve.   Now all I need is good weather. 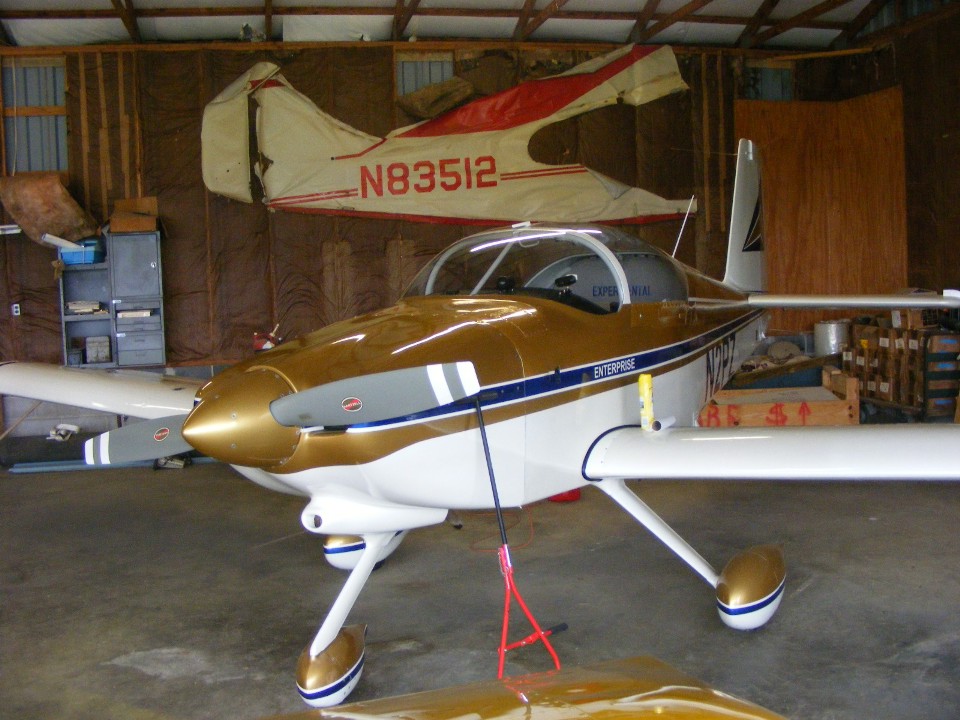 The weather was light rain or mist on Saturday or fully overcast and the forecast was less than ideal for Sunday.

October 7, 2012: I was awake ahead of the alarm on my cell phone again this Sunday morning.  I logged on to the web to check the weather again before sunrise to see VFR conditions would prevail in most of Georgia south and east of Atlanta.  Those conditions would not be where I would be departing just 10 miles south of Chattanooga.  By the time the sun came up, there was a patch of blue directly overhead before breakfast.  Wendell looked at Lookout Mountain and it was well below the overcast in the northwest direction from Folks Field.  I realized I had a chance to get airborne and I could follow that open patch of sky to the clear area of the state.  The clouds were moving toward the southeast and that is the direction of my flight to get around the Atlanta Class B airspace on the east side of the city.

My takeoff was at 9:20 AM and I gave Wendell the parting salute as I passed the hangar on my takeoff roll.  At 3,500 feet MSL, I had plenty of vertical clearance above the ridges on course toward Jasper, Georgia.  The Dynon D-10A reported a 43 MPH direct tail wind along my course.  The last of the ground fog below was gone by the time I reached Lake Lanier northeast of Atlanta cruising at 5,500 MSL.  I had climbed steadily to 7,500 MSL by the time I reached Winder, Georgia and turned on course for Dublin and Hazlehurst.  The tail wind was now less effective as I turned toward the south.  I settled into my routine of monitoring Atlanta Center and changing fuel tanks when the 30-minute alarm light would come up from the engine monitor.  I landed at Hazlehurst about 1 hour and 55 minutes after take off, adding 1.9 hours to the Hobbs meter.

There was one airplane on the ramp when I pulled up to the fuel pump.  I took my morning break and came back to get fuel.  My wife called from Florida to check on my status.  I filled the tanks as another airplane pulled up behind me.   I got my receipt and secured the filler caps before pulling away from the fuel pump to a parking area away from the FBO building.  I shut down the engine long enough to place a call to Rockledge Airport to tell Bill when to expect me.  The call went to his voice mail.

It was about 11:30 AM when I departed Hazlehurst on a course that would take me by Waycross, Jacksonville, Saint Augustine, and Daytona Beach.  I got out my camera and started taking some photos as I approached Jacksonville at 9,500 MSL.  Eastern Time is displayed at the bottom left corner of my GPS 296 showing 12:23 PM.  The ground speed is shown as 169 MPH at the upper left corner of the GPS.  My true airspeed of 162 MPH is shown on the Dynon D-10A.  Take note of the lean mixture in cruise flight showing only 5.5 gallons per hour fuel burn.  Those four bar graph lines indicate the exhaust gas temperatures from all four cylinders are balanced very nicely.  The highest cylinder head temperature is 375 degrees F.  The temperature outside is 11 degrees C, or just under 52 degrees F.  The ground temperature was around 77 degrees F.  I was keeping the regular altimeter set for the local barometric pressure as I flew along the route.  I was almost to my destination before I put in the correct altimeter setting into the Dynon unit.  I used the VOR receiver to help pass the time and use the new sectional charts I had aboard. 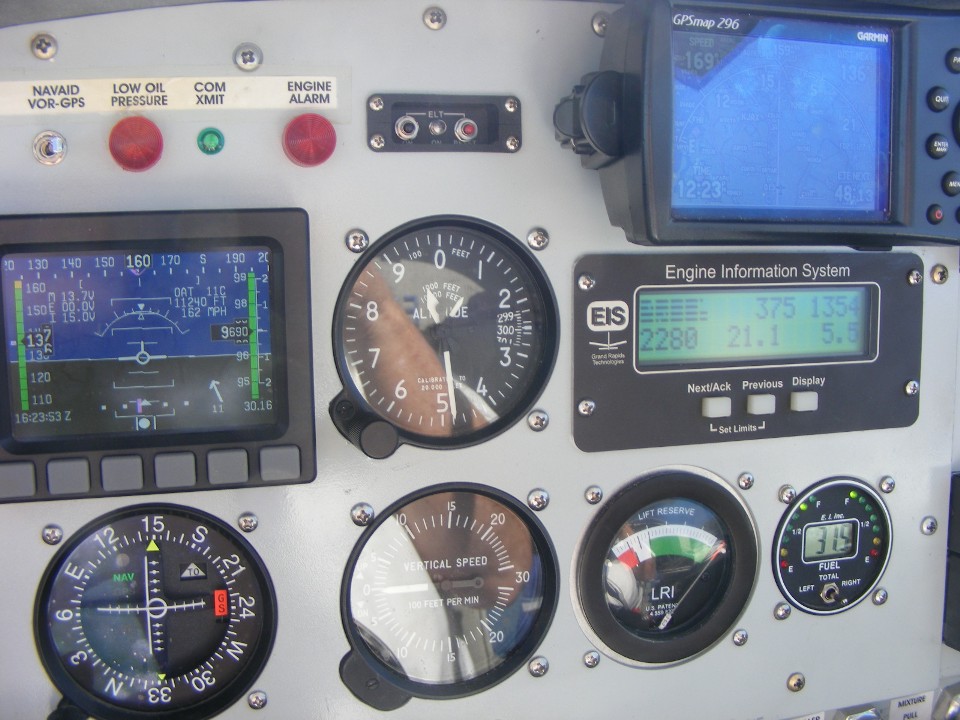 Here is a view of the Jacksonville International Airport as I approach the city ahead.  The Saint John's River is at the right of the photo as it flows east to the Atlantic Ocean from the city. 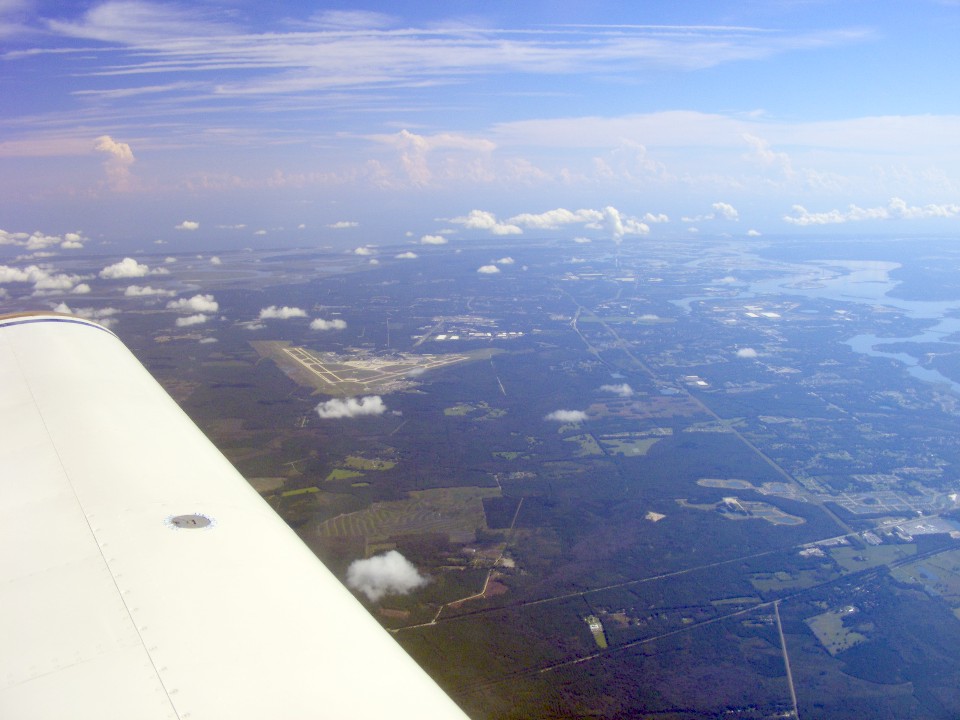 I cropped this photo a bit showing the downtown area where I-95 crosses the Fuller-Warren Bridge and meets the eastern end of Interstate Highway 10 near the Saint John's River.  There is also a major railroad yard down there.  US 90 heads east to Jacksonville Beach and the ocean. 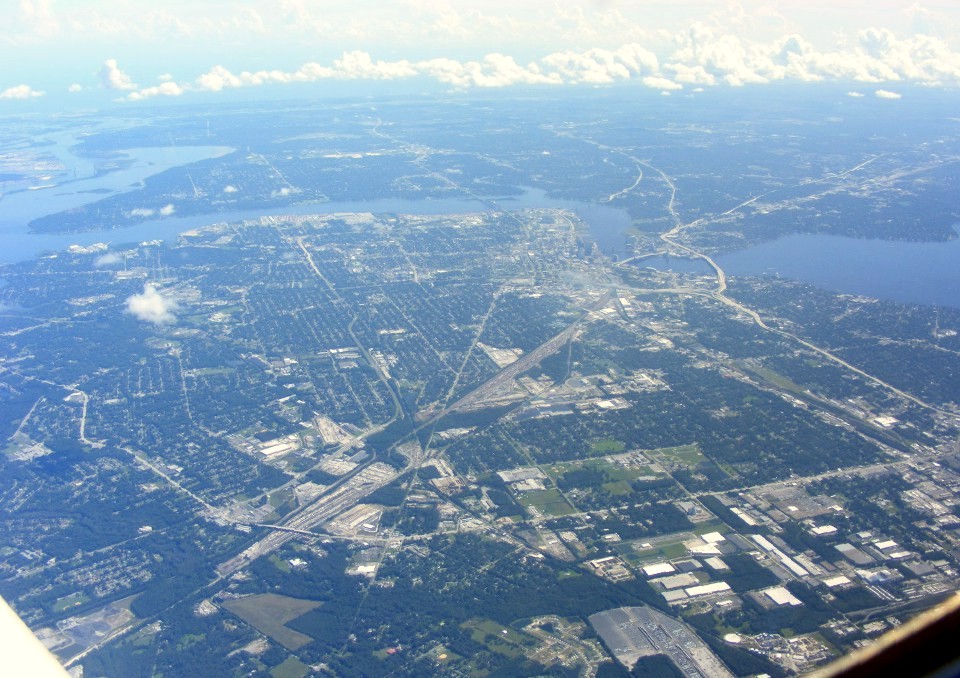 That is Jacksonville Naval Air Station at the bend in the river.  The Saint John's River begins not too far west of Melbourne, Florida and flows north to Jacksonville before reaching the ocean as seen in the photo above.  It is one of a few rivers in the USA that flow north. 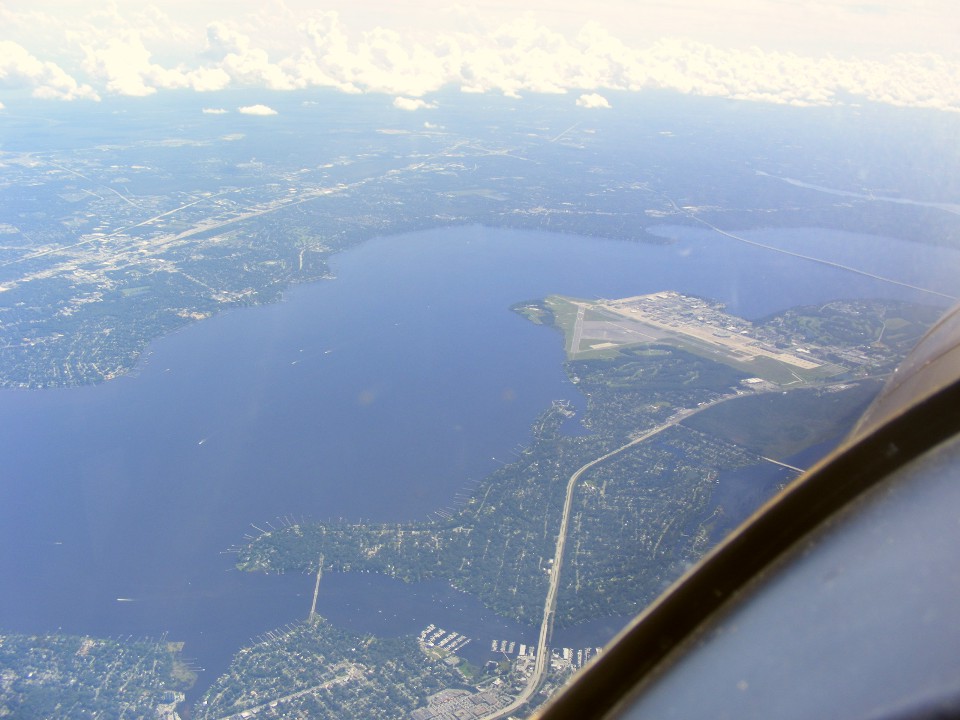 Saint Augustine was covered by low clouds when I went by there.  The Daytona speedway and airport are clearly visible as I went past on the west side of town.   That is the "World's Most Famous Beach" out there meeting the Atlantic Ocean. 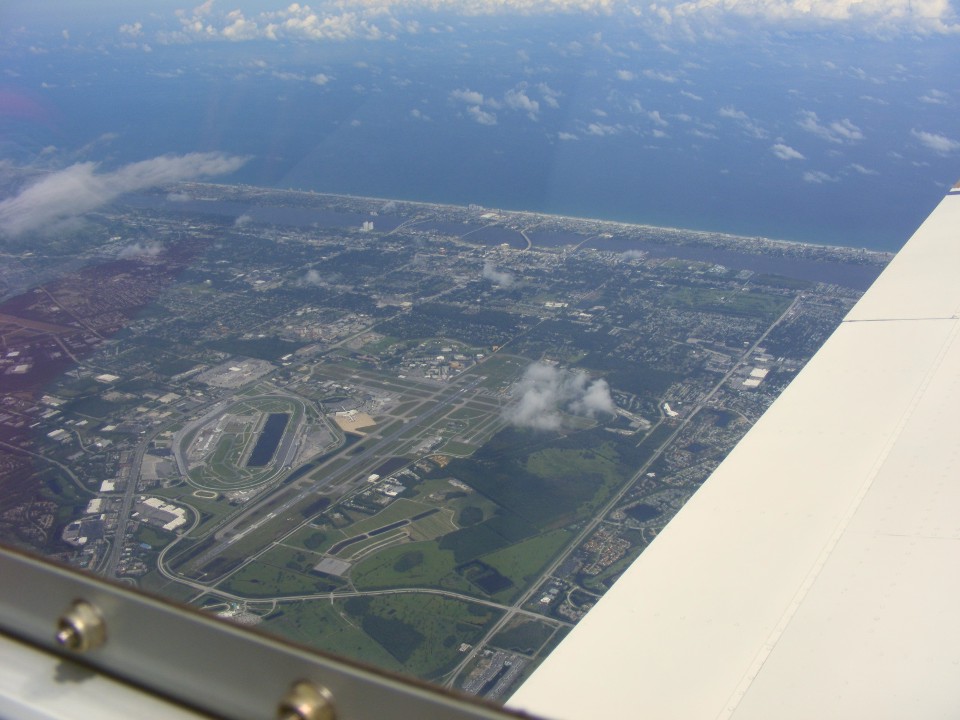 Things got busy as I started my descent toward Rockledge Airport.  I passed over Titusville Airport at less than 4,000 MSL which kept me well above the 1,900-foot ceiling of their Class D airspace.  I turned off the auto-pilot during this part of the flight to avoid some rising cumulus clouds.  There was a perfect gap in those clouds over the Titusville Airport (KTIX).  I passed over the outer marker for runway 36 and my marker beacon receiver came alive with a familiar sound.  There was also a big gap in the clouds as I got to that point allowing me to get below the clouds as I approached Rockledge Airport.  I set up for the approach from the south by entering the landing pattern on the west side of the runway.  I was descending to 850 feet MSL in the pattern as another airplane passed directly over the runway heading north at about 1,000 MSL off my left wing.  The approach was smooth with a light cross wind from the east.  I greased the landing and stopped with plenty of runway ahead of me before back-taxiing to the ramp.  There were a couple of pilots at the hangars waving to me as I got off the runway.  They came up to meet me when I was opening the door to the hangar.  I had arrived at about 1:25 PM.  The Hobbs meter added another 1.9 hours from Hazlehurst to Rockledge and now reads 337.8 hours total flight time.

October 8, 2012:  This photo was taken on Monday morning, October 8, 2012 after I cleaned off the few bugs I hit in my stops on the way south.  I had a few more visitors this morning and showed the features of the airplane.  One of my visitors from yesterday had Googled N2PZ and found my web site immediately.  He was surprised at the number of pages on this web site. 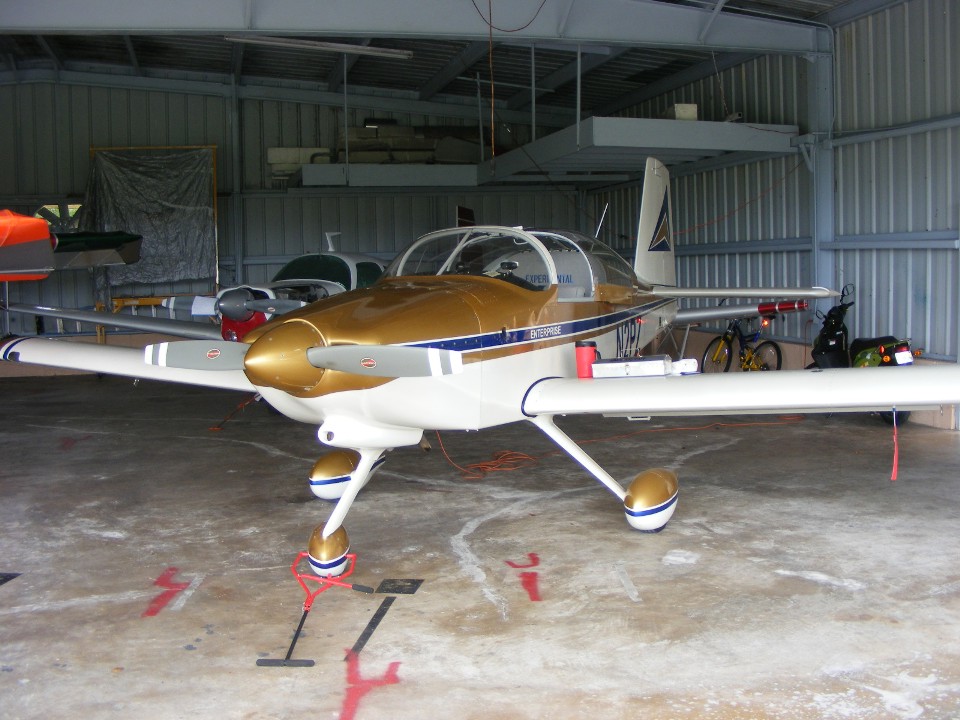 Just as I was ready to lock up and leave for the day, the Goodyear Blimp flew down the river just east of US 1.  I took several photos as they went past my location.  This photo was taken at 12:15 PM.  They are based at the Pompano Beach Airport (KPMP) just north of Fort Lauderdale, Florida.  That is about 146 miles south of the Rockledge Airport. 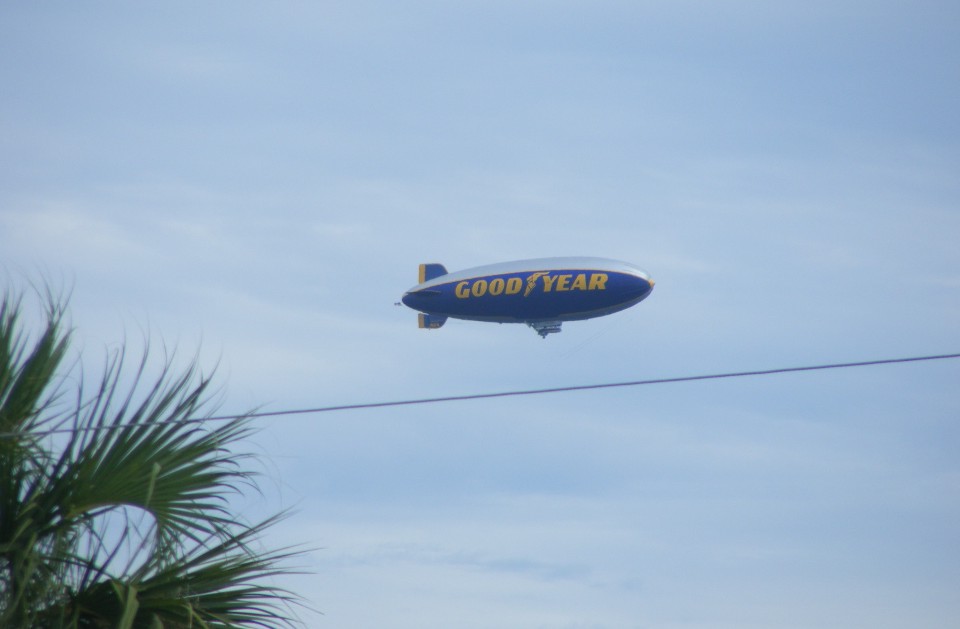 The Enterprise is at its new home in Florida.  Let the flying continue soon.  Here is the GPS ground track of the rental car ride northbound in GREEN, and the flight back into Florida in BLUE. 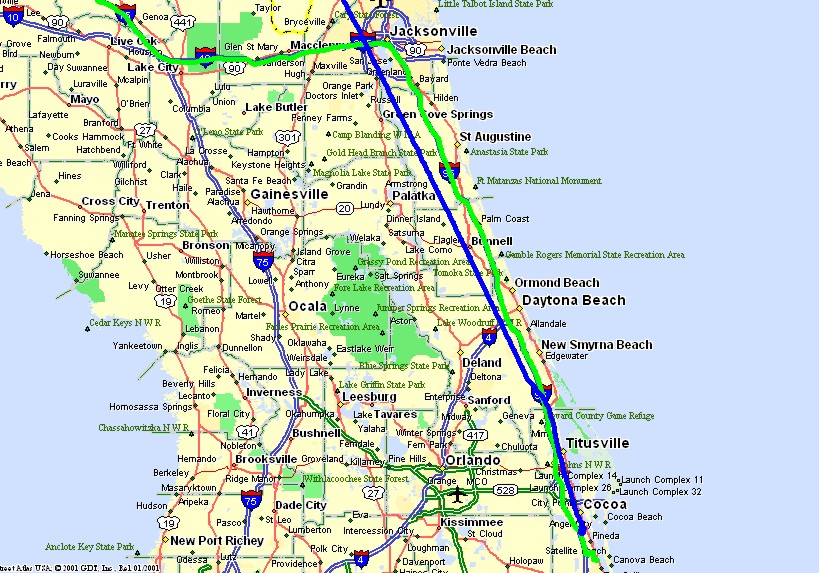 This local map from Melbourne to Cocoa shows the departure in GREEN and return by air in BLUE.  The GREEN route by car was 628 miles and the BLUE route by air was only 549 miles. 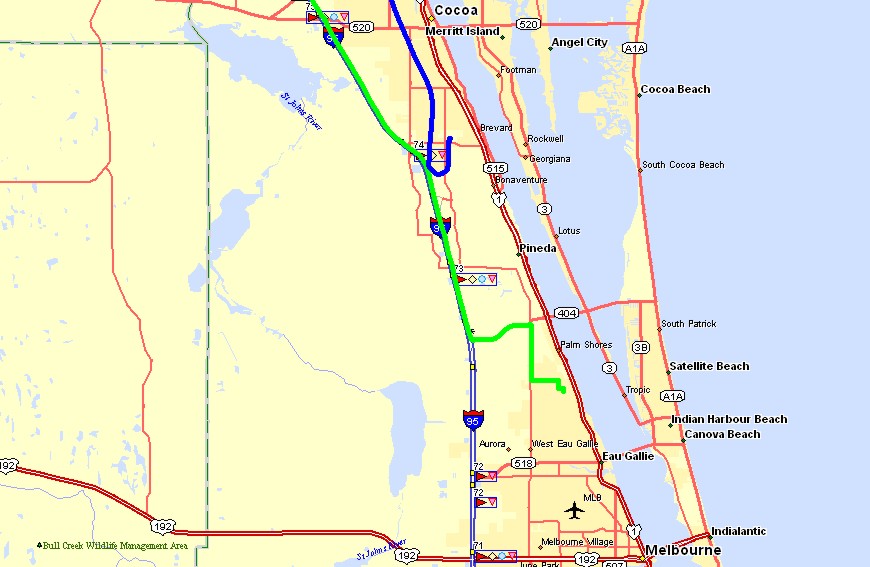