January 15, 2011:  The "Southern Snow Storm" that came last Sunday night was photographed by me on the previous page last Monday, January 10, 2011.  As I started to edit this text, I noticed my previous entry showed the date as 2010, not 2011.  Both entries are now corrected.  Here are a few photos taken on this Saturday from the airport where my airplane is hangared.   The temperatures have hardly made it above freezing during this past week, and then only briefly.  As a result, there is still plenty of snow in the fields and on residential lawns.  This is view looking south.  The runway is out there under the snow as seen from my vantage point on the concrete ramp in front of the hangar and warehouse. 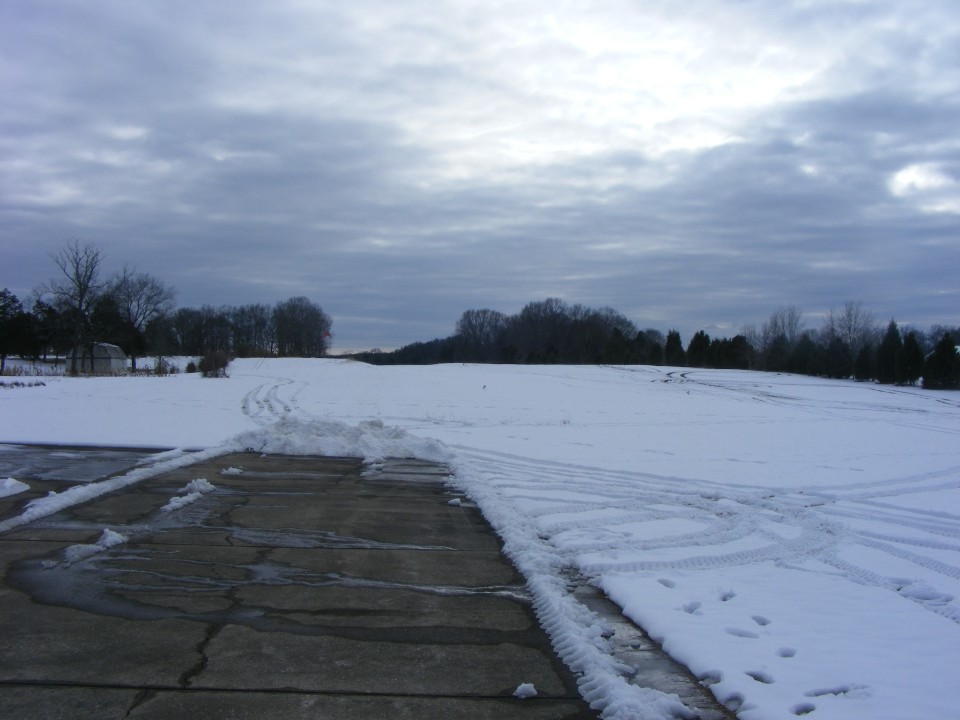 The telephoto lens brings the wind sock closer without having to walk in the snow. 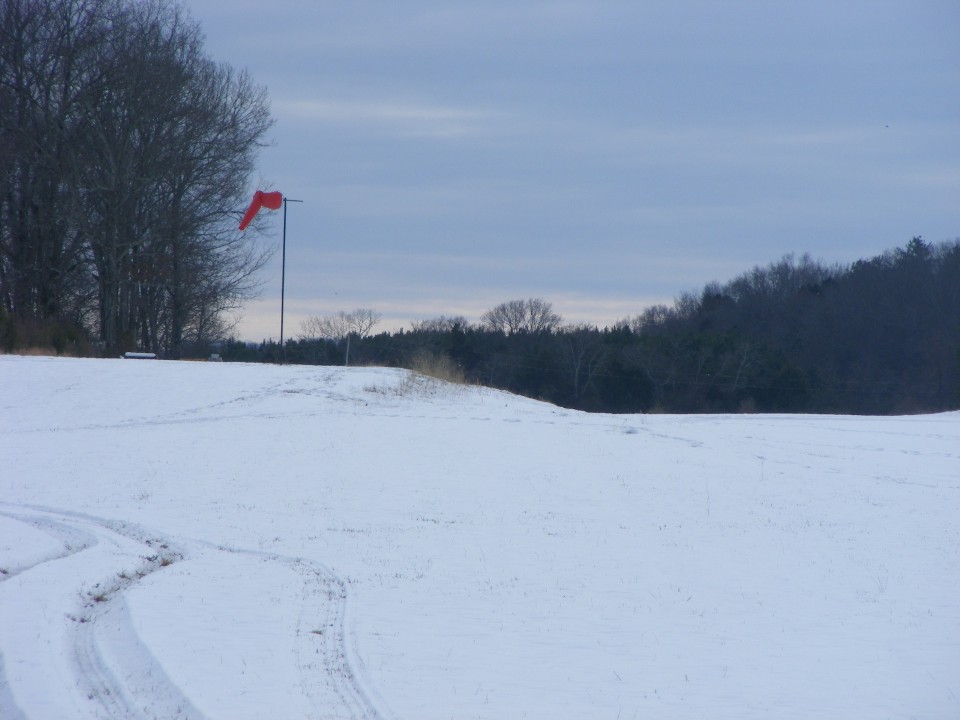 Inside the hangar, things are normal.  The Enterprise has its battery minder plugged in.  The clock timer is on the floor down below the oil access door with an extension cord ready to plug in on a cold night before a possible flying day on a Saturday or Sunday during the winter.  With all that snow outside, there won't be any good flying weather for a while yet.  When that good weather comes, the oil heater on the bottom of the engine will be put into service by the time to have 75-degree oil temperature for an easy engine start on a cold day. 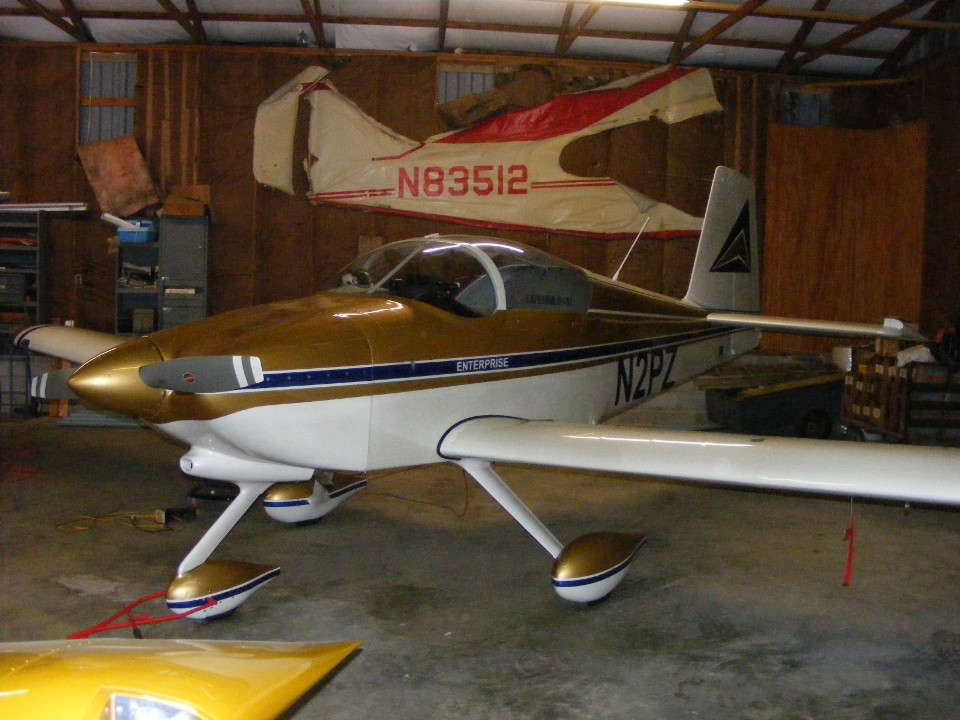 I saw this snow fort built in front a neighborhood house about two blocks from my place.  I took this photo on Sunday, January 16, 2011.  My forced flash lit up the tail lights of the car in the driveway. 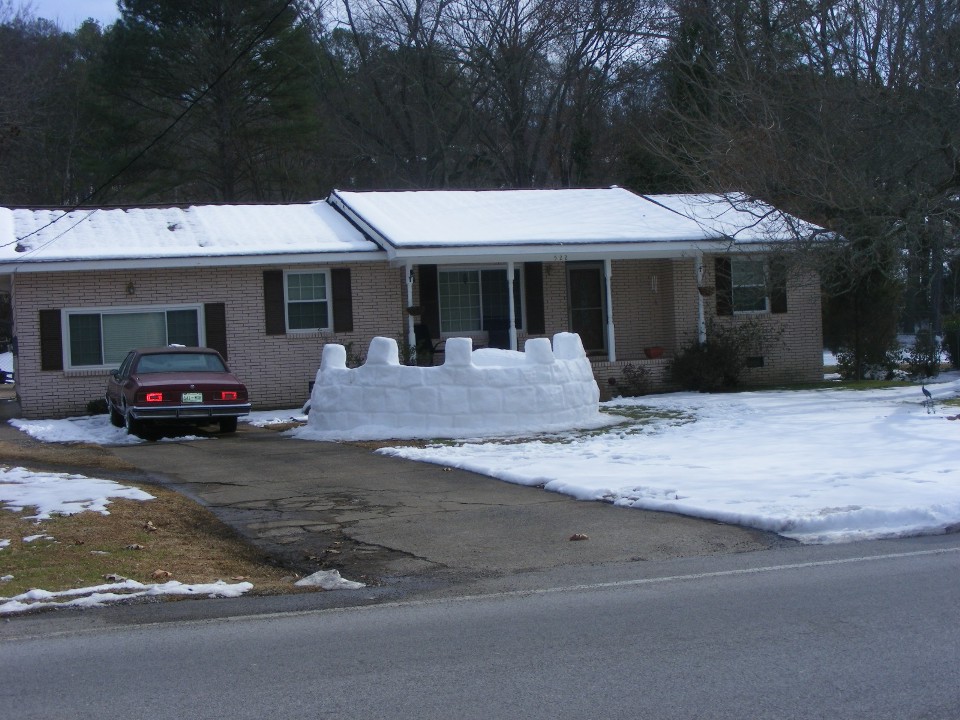 This posting is done on Monday evening of M.L.K. day.  The banks are closed and there was no mail service today.  The town of East Ridge did have garbage pickup today since they did not come last Monday when all that snow was on the roads.  You can see in the photo above, all the streets are clear of snow and ice.

Yesterday (Sunday), I had a chance to finish up my October 2010 photo pages from my high school reunion.  All the photos are published to that section of this web site.  I was also working on a computer laptop for a friend.  It was an older HP Pavilion ZV5000 computer that had Ubuntu Linux installed on it when I got it.   My friend is strictly a Windows guy and wanted it restored to Windows XP.  I noticed it had a genuine Windows XP sticker on the bottom, so all I needed was a bootable Windows XP installation CD-ROM.  A friend loaned me the CD to do the job.  When it came time to validate the installation, the number on the bottom of the computer did the trick.  After many upgraded files from the Windows Update web site, I now pronounce it a healthy computer with integrated wireless network receiver and nice stereo speakers.

For now, things are up to date on this web site and my friendly chores.   If the weather does not pull any surprises on me, I will take a short road trip over to Huntsville, Alabama tomorrow as part of day job to call on a client as part of day job.  They were closed today observing M.L.K. Day.

January 23, 2011: It is Sunday and the day was less than perfect.  Wendell decided to go for a couple of short flights after all the recent bad weather gave us a break.  I walked out on the runway and found some soft spots and decided to stay on the ground.  The overcast skies did not appeal to me either.  That white stuff behind the airplane is snow that has yet to melt away after 13 days since the big snowfall in this area. 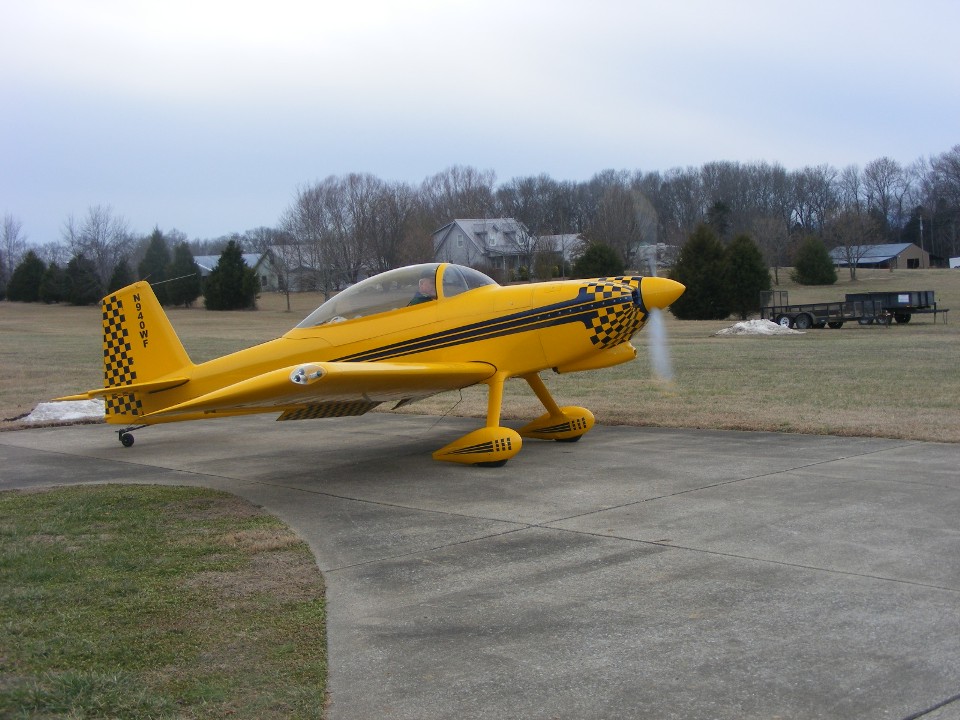 Wendell sits at the end of the runway to fully warm up the engine before takeoff.  More of that white stuff is in this photo. 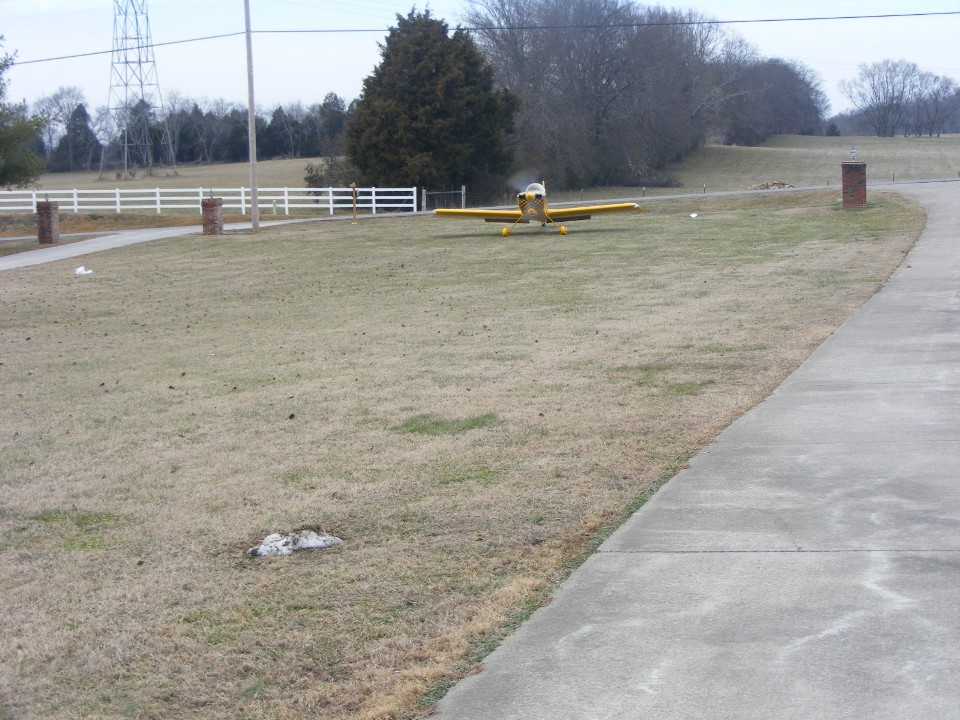 He lifts off the runway ahead of the soft spot I found.  It was not muddy, just soft. 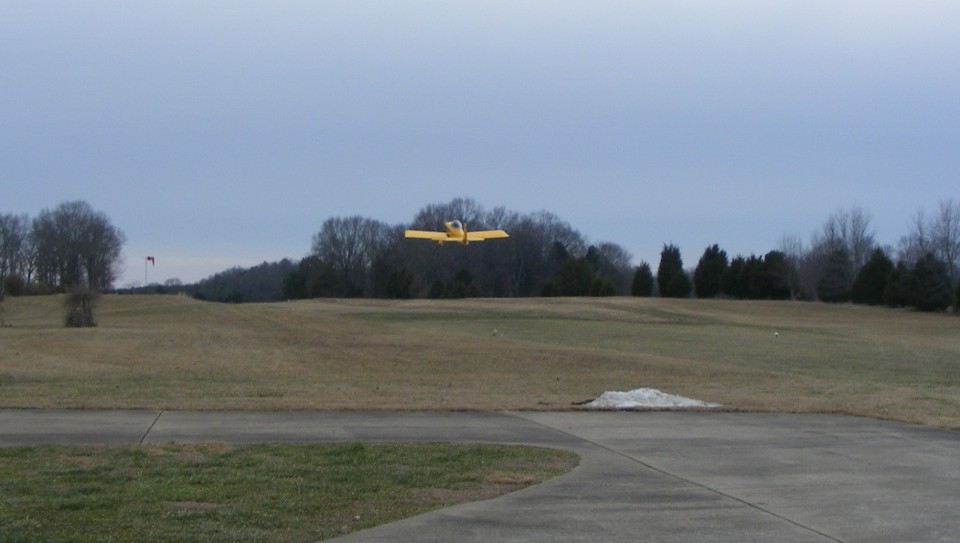 Here is his landing after the short flight down to the airport for Lafayette, Georgia and back.  He pulled up to the ramp and shut off the engine for just a minute to tell me the overcast was at 5,000 feet MSL.   He cranked the engine again and headed out for another short flight.  I waited for him to return and helped to push his airplane back into the hangar. 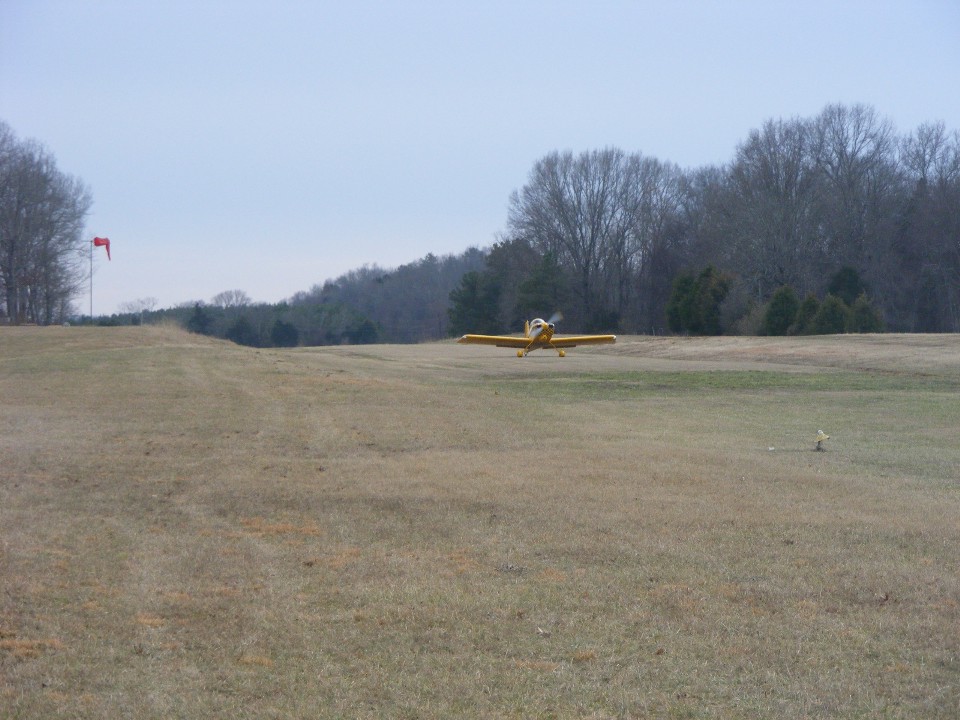 January 29, 2011:  This Saturday had perfect weather to fly after all the snow seen above and on the previous web page.  I pulled Wendell's RV-8 out of the hangar and then my airplane and managed a short flight to get the engine loosened up again.  The oil sump heater helped raise the oil temperature up to something reasonable.  The actual air temperature today made it all the way up to 68 degrees F.  I checked the engine oil temp via the engine monitor about two hours before I would take flight.  The oil temp was 59F before I plugged in the heater.  The oil temp was 75F when I rolled the airplane out to the ramp.  The engine turned over slower than usual for a couple of turns, then it started thanks to the priming I did before turning the key to the start position.  This would be short local flight, not a fuel run as there were about 23 gallons aboard before takeoff. 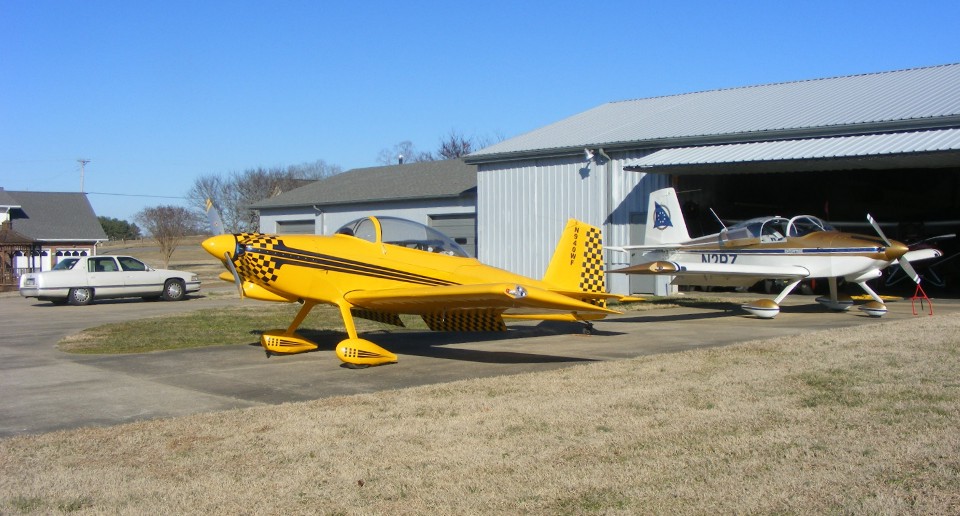 I always seem to twist my camera a bit when I take a photo of Wendell's airplane.   The ramp is really not that steep from the hangar.  This photo was taken after I returned and parked my airplane in front of the hangar door before putting it away.   Wendell returned just after I had my airplane parked in its normal position inside the hangar.  My total flight time today was only 0.3 hours on the Hobbs meter, which now reads 330.4 hours.

(March 5, 2011)  I downloaded the GPS ground track from today's short flight and posted below.  I flew the short distance up to the residence of fellow pilot Terry McDaniel.  He is the guy that is the CFII who gives me a check ride every two years.  He is also the guy who flew to Alaska with Wendell in 2007 to help deliver the Cessna 182 to its new owner in Anchorage.

The GPS plot shows the flight where I circled Terry's house and then drove my car up there after I put the airplane back in the hangar.  Terry wanted some help with loading some low-clearance GPS waypoints into the Garmin unit he uses in his motor home.  It was a computer spread sheet issue that needed to have some extra text removed before the actual data fields in the file would be accepted by the unit.