December 24, 2010:  The trip to Jacksonville from Melbourne is not that bad, even on a holiday weekend.  The reward is to see family and see the joy of a child at Christmas time.  My wife's grandson and his father take each other's photo with their digital cameras.  That train set is in need of more track to get the most pleasure from it. 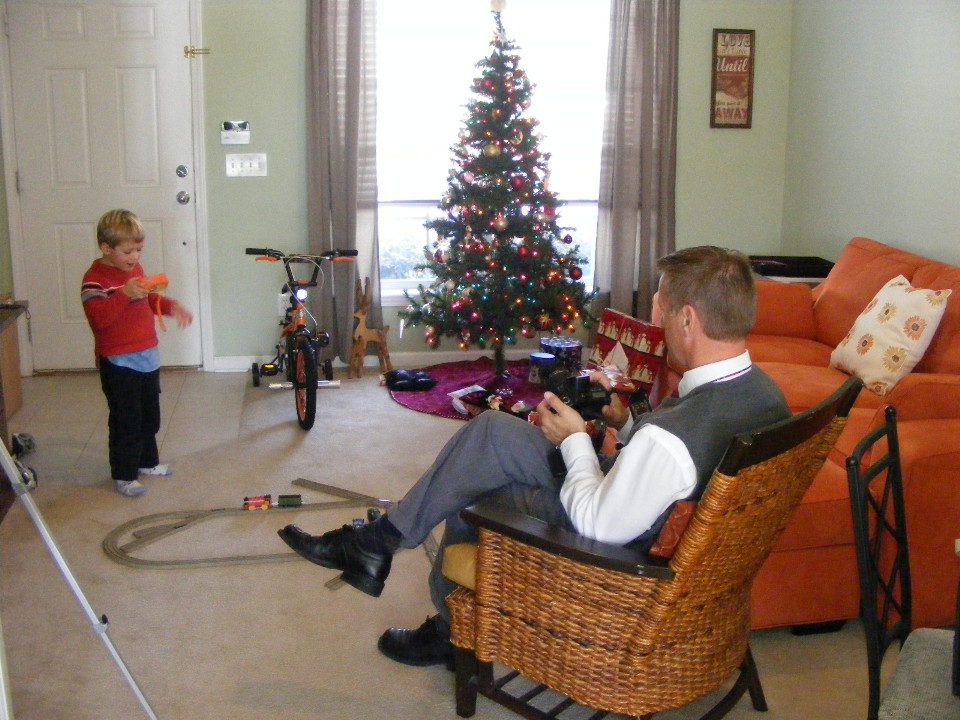 Three generations share the joy of a child with a new toy at Christmas. 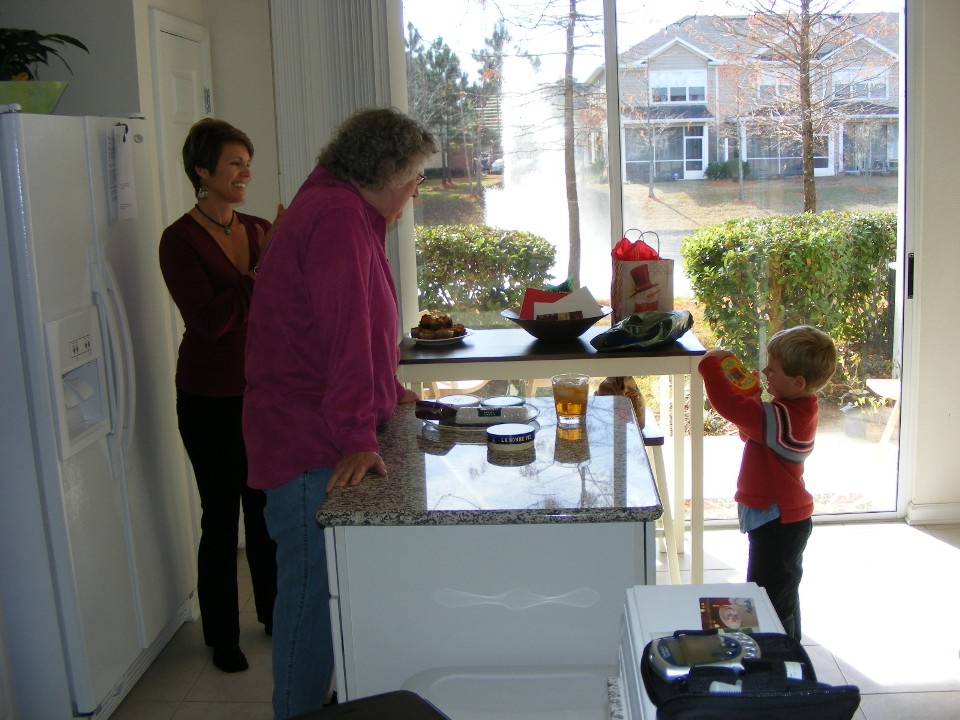 By the looks of the photo below, you can see I just had to make a trip to Walmart on Christmas Eve day to get some additional track.  I have not played with trains since I had my Lionel electric trains when I was a kid in the 1950's.  I got a track expansion pack and another small Thomas the Train set to get enough curves and straight pieces to build this double reversing layout below.  Harrison is having a really good time with it, including a couple of train wrecks of these battery-powered engines.  I took these pictures to be sure his mom would know how to put it all together again. 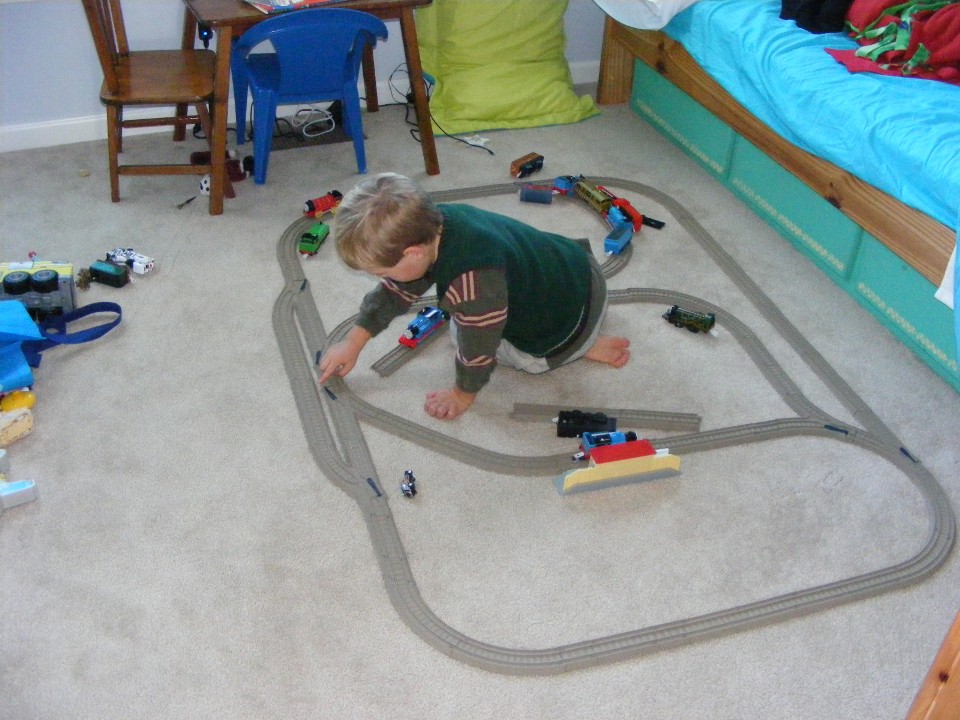 He is really focused on getting the trains on the track.  If only he realized he needed to have it pointed the other way to get from the side track out to the main line.  The little red and white train station came with the kit that had 8 curves and a couple of straight pieces of track.  The expansion track kit had a number of straight pieces of different lengths and only four curves.  All of those switch tracks were part of what he had when I arrived this morning for this Christmas Eve celebration. 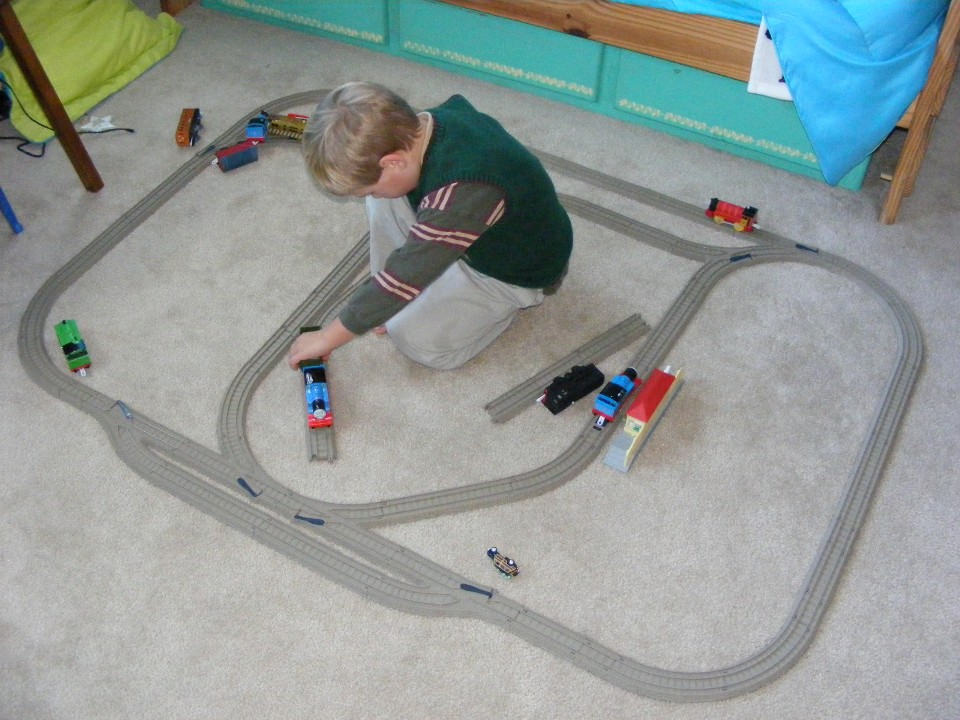 I had to ask Harrison to smile for the camera to get the photo I wanted to mark this day of joy with a new toy. 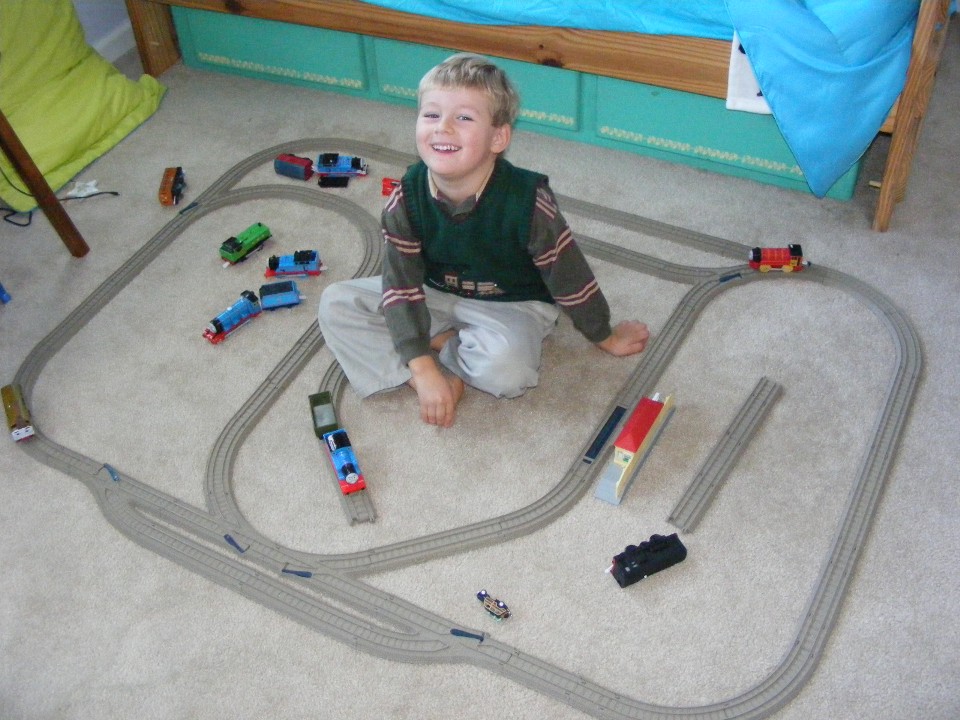 The original plans to make this a day trip went out the window when I was asked to build a TV stand / storage cabinet for my wife's daughter.  She is the young lady seen in the photo above.  I taught her to drive a stick shift car at age 15 in 1986.   Of course, my tool box is always in the car for just these occasions.  By the time the project was complete and the big-screen TV was in its new place, the evening was here and so were we.

The trip back to Melbourne on Christmas Day was an easy drive with little traffic on the highways.  We even took a short ride on the Old Dixie Highway in Flagler County off US 1.  That was followed with a short ride down the beach highway A1A to Ormond Beach before heading back to I-95 for the rest of the trip back to Melbourne.  The only place to get something to eat was Denny's, Waffle House, truck stops, and of course -- any Chinese restaurant.  We chose Denny's to have 'traditional' American food.  That large chocolate shake was a memorable ending to the meal!

The week after Christmas was very slow for business as it is every year.   Still, there were a few calls during three of those five days.  Late in the day of December 31st we picked up some movies from Blockbuster, then went to Best Buy to check out the new 3-D high-definition television sets.  We had dinner out at one of favorite restaurants, Toojays.   New Year's day was a good day to stay home and watch the movies.

I made the return trip to Chattanooga on Sunday, January 2, 2011.  I made a stop at a rest area on Interstate 95 less than two hours into the drive.  It was there I saw a man wearing a wireless headset with a boom microphone like mine, but no wires of course.  I started up a conversation with the guy to learn where he got it.  This is what I have been looking for to use in the car and at home.  We were both from Tennessee heading for home today.  I made sure I got his cell phone number and called him when we got on the highway to hear how he sounded to me.  The noise cancellation was what I hoped for from that type of headset.   There was no hint of road noise from his end of the call.  We talked about our similar business travels on the road as we went past Saint Augustine and through Jacksonville.  I had shown him my road atlas and some of my favorite Georgia back roads to avoid the interstate highways when were getting acquainted at the rest area.   I stopped at my usual Petro truck stop for fuel at the second I-95 exit in Georgia.   My new friend stopped in as I finished filling my tank.  We went inside and he showed me the headset on sale in the store.  Now all I need is to get a blue tooth cell phone and I can replace both my old phones with something a bit more modern.   The two cell phones I use today both have the headset plug and socket connections to support my Plantronics noise-cancelling headsets for hands-free operation required in many states.

My stop in Kennesaw to have dinner with my son Marshall and his best friend Jasmine was a pleasant break from the 10-hours of driving from Florida.  The ride home also included a stop in Dalton, Georgia to see another high-school classmate.   My wife had sent him a Christmas gift. It was a book about the value of old baseball cards.  That book was thicker than many phone books and he really appreciated it since he has a large collection of cards.

January 2011 in Tennessee with SNOW!

January 10, 2011:  The "Southern Snow Storm" caught Chattanooga in its path with this tranquil scene on Monday.  I stood in my open garage door to take this photo with a forced flash from my camera.   You can see how it stopped the snow flakes near the camera and the reflection from the running light on that car parked in the neighbor's drive way across the street.   This was Monday, the normal garbage day.  I thought about the forecast for snow when I put the cart outside last night.  It was around 3 PM when I took this photo and it was obvious they were not coming today.  I had been out Sunday afternoon to fill the car with fuel and get a few last minute groceries.  I also decided I would replace the audio amplifier that died in October when I was supplying the music for my 45th high-school reunion.  I found a good deal at Radio Shack of all places.   The amplifier has solid state controls and a remote control.  My old amplifier had intermittent audio switches and finally died of a shorted power transformer.  The new stereo audio amplifier fills the house with music when there is nothing on TV but reruns. 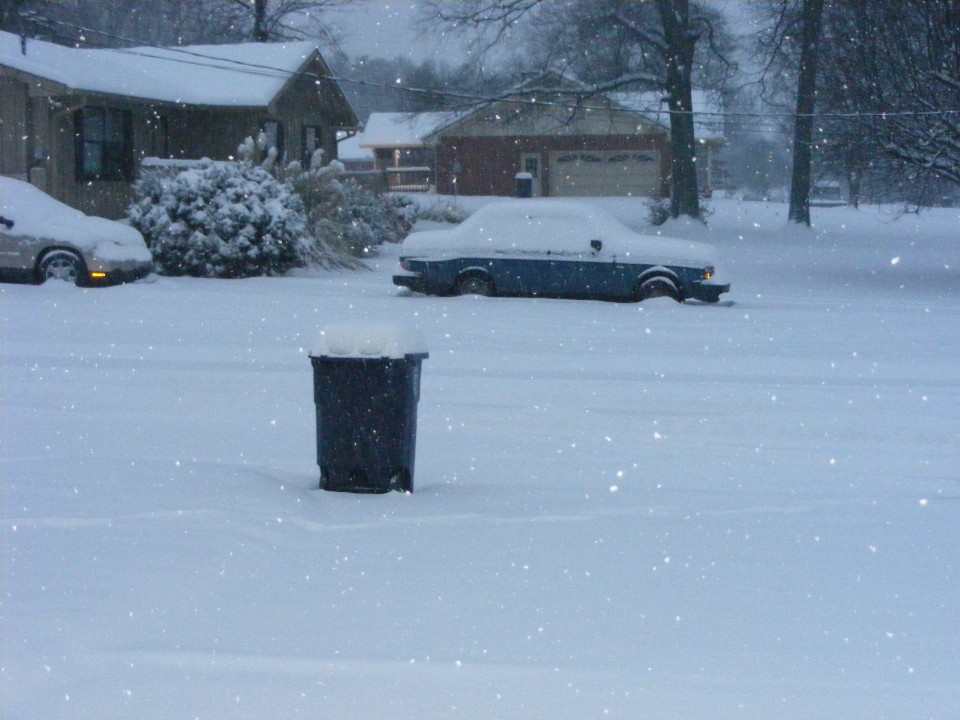 The street by my house has a few tracks where some folks have ventured out today. 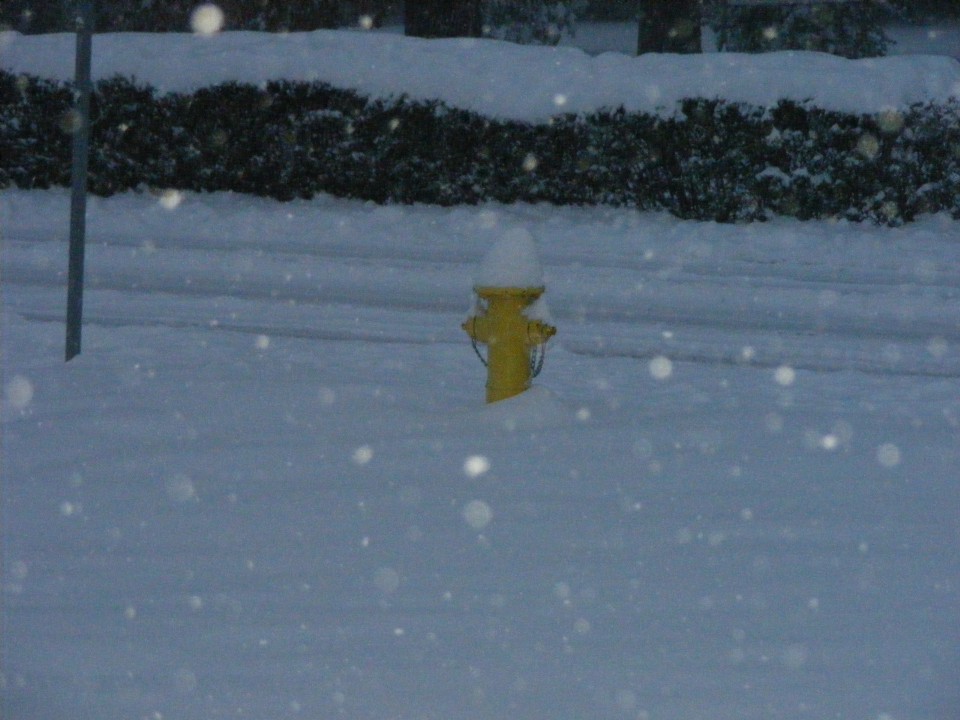 I made the trip out to the garbage can to measure the snow on its lid at 6.5 inches.  I did not think about taking a photo of the measurement. 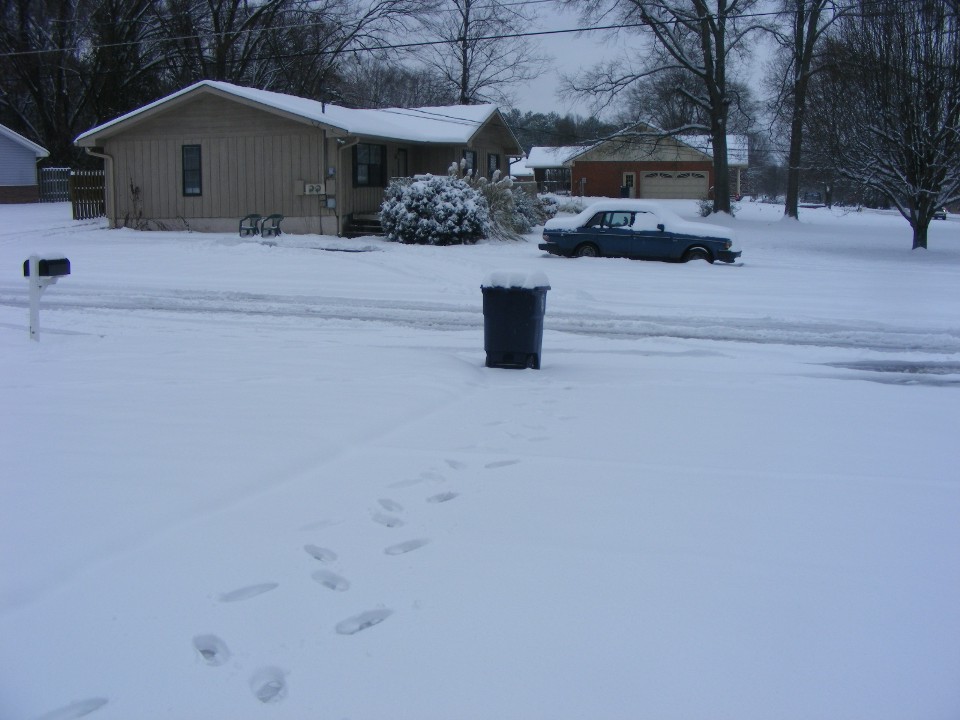 This pickup truck was passing by as I was taking photos. 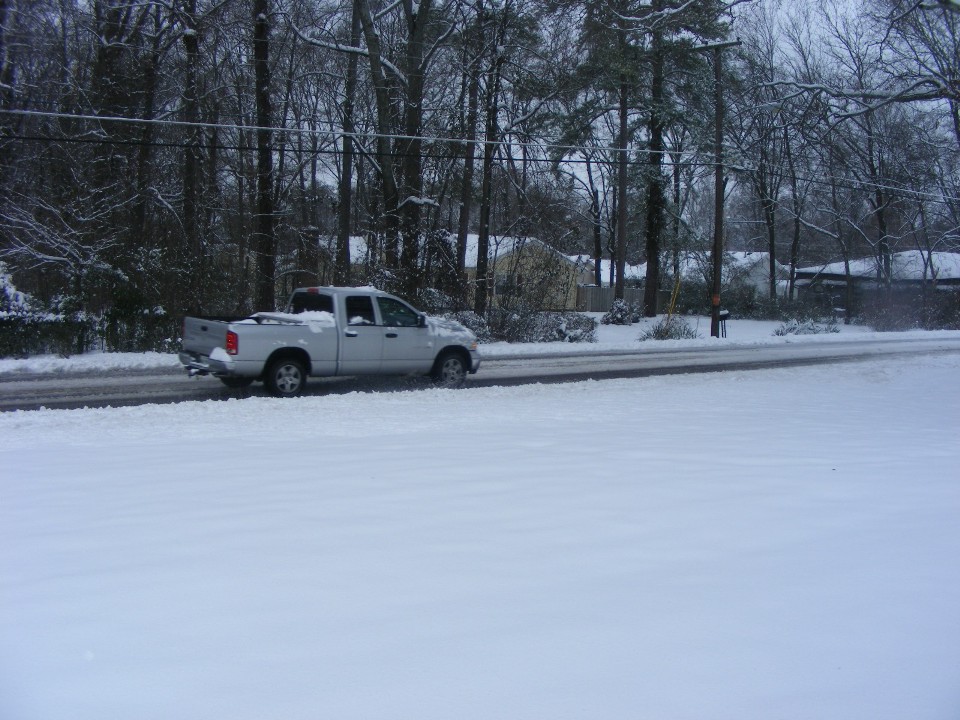 Three young people with boogie boards were looking for a place to try them out on the snow. 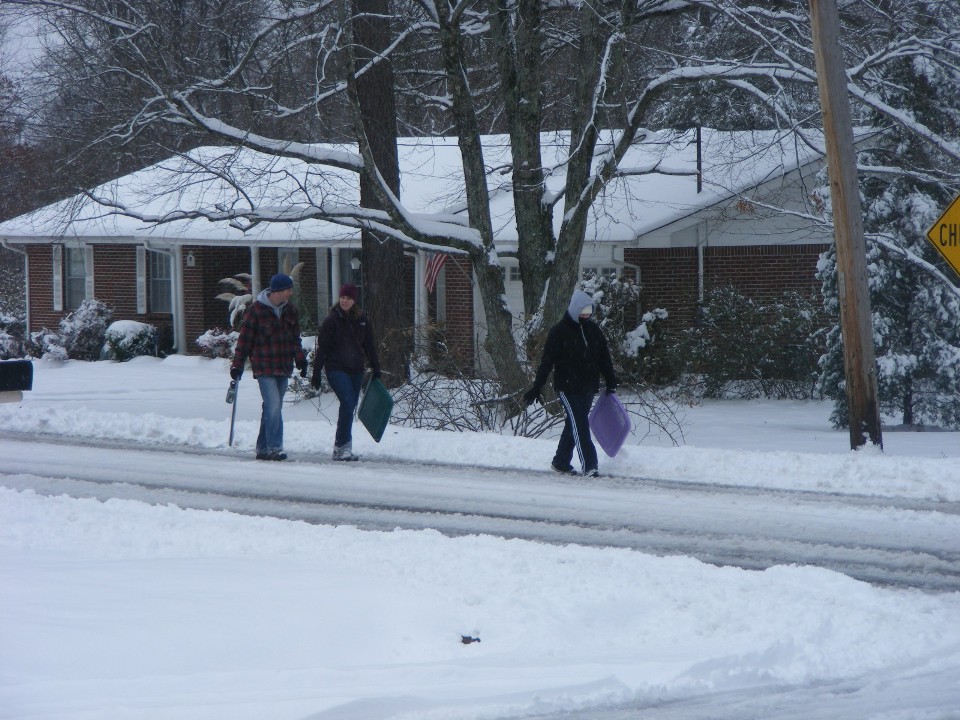 I directed them up to the end of my street where the last two town houses have untouched driveways this morning.  That last power pole is where the street ends and a driveway goes up the hill to service the two units facing this way.  The house at the top with the elevated wooden deck  has only grass on this side with its driveway connected to the street up there on the other side of the house. 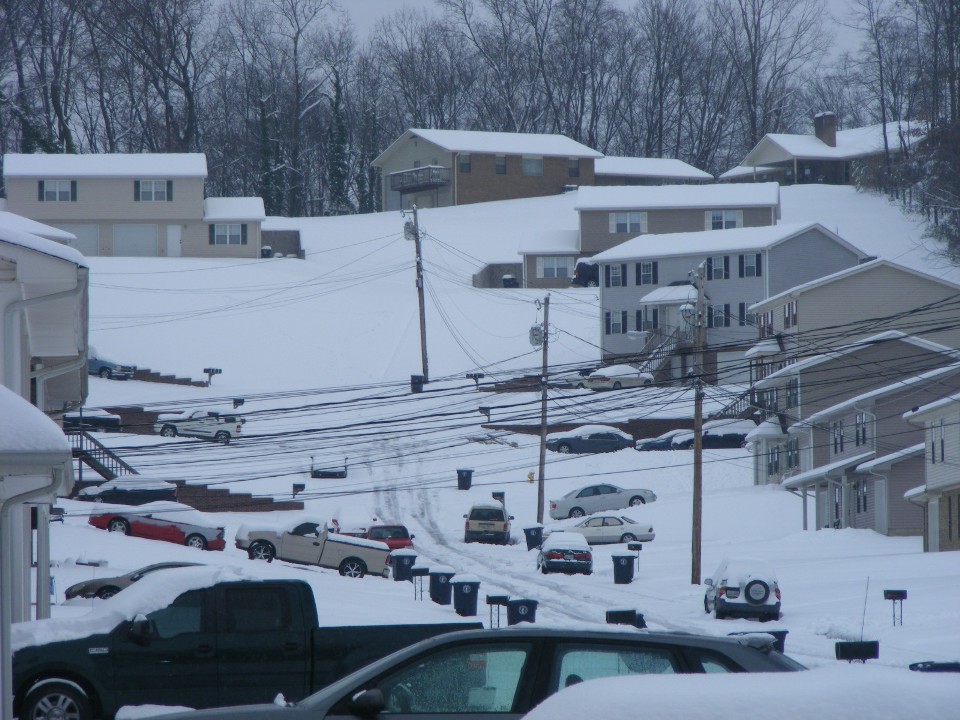 They head up the hill for some fun.  I saw them later coming back down the hill heading for home. 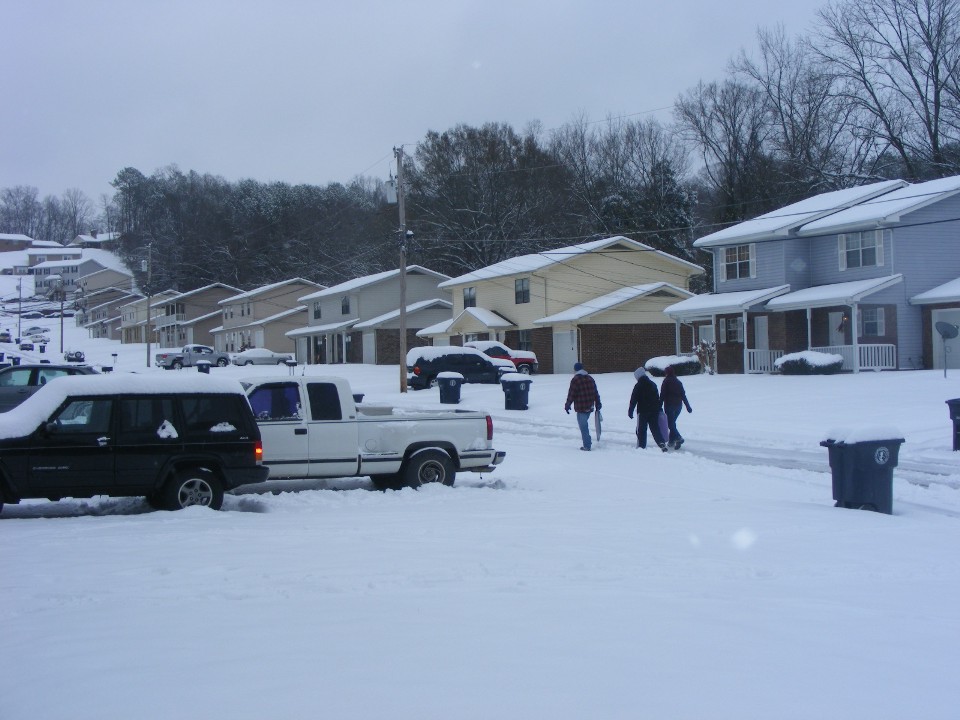 As for me, the car stays in the garage as I work from home for my day job. 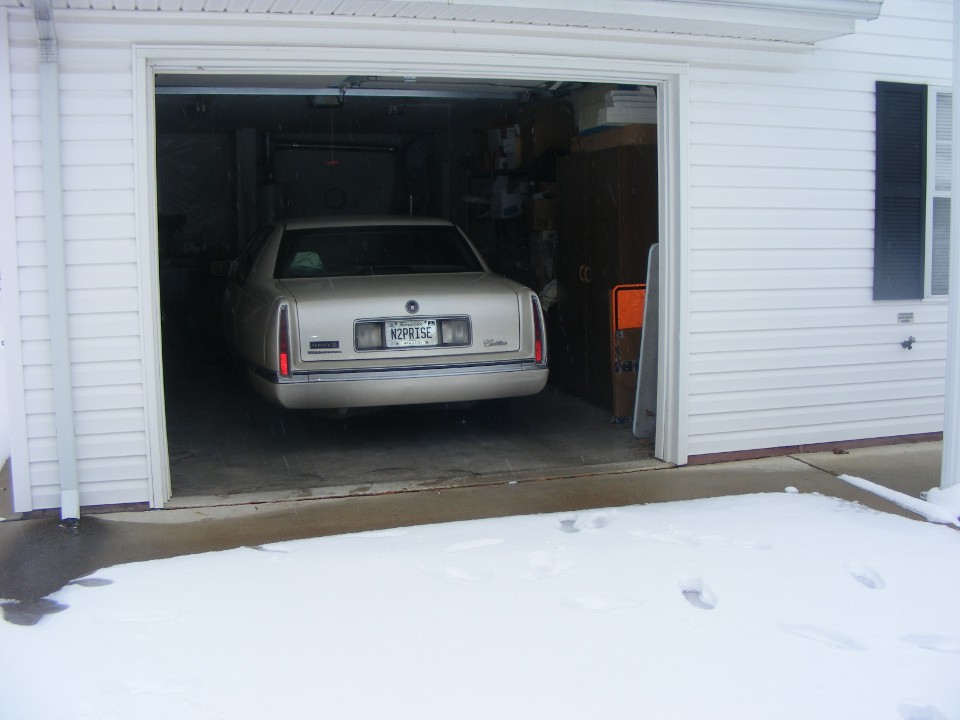