December 27, 2009: The weather was very clear with winds aloft moving much as they do in the winter in this area.  A large frontal zone of clouds was to the south and moving rapidly to the northeast.  The route to Huntsville, Alabama was clear, so away I went to see David Edgemon again. 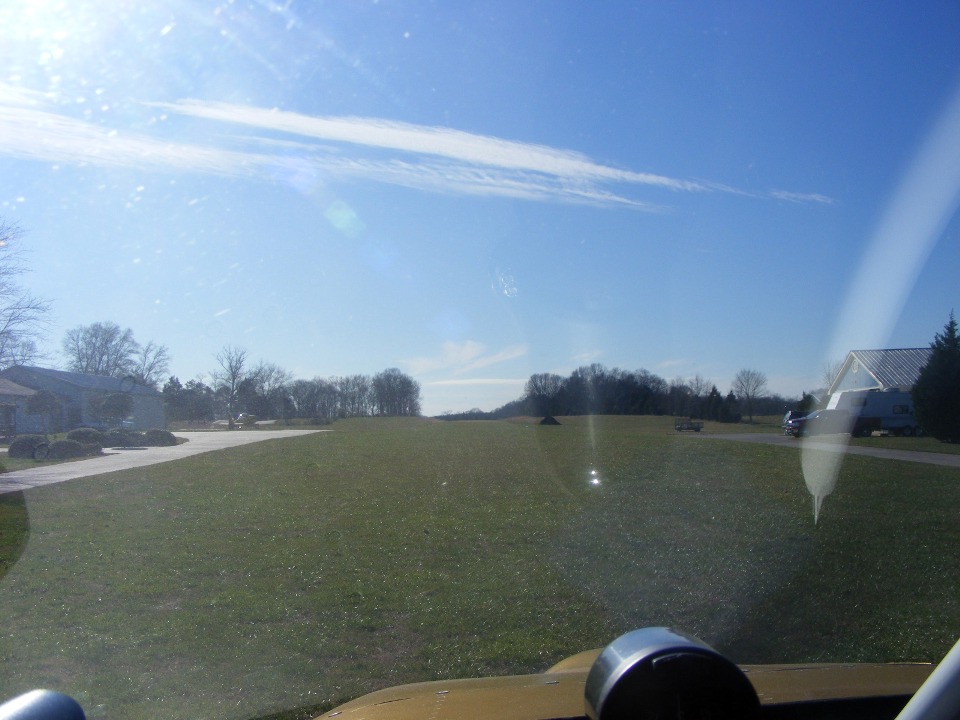 The winds across the low mountains in this area made for a bumpy ride.  A bit of haze is evident looking down from about 4,500 feet MSL.  This is the town of Trenton, Georgia with Interstate Highway 59 heading southwest toward Birmingham, Alabama. 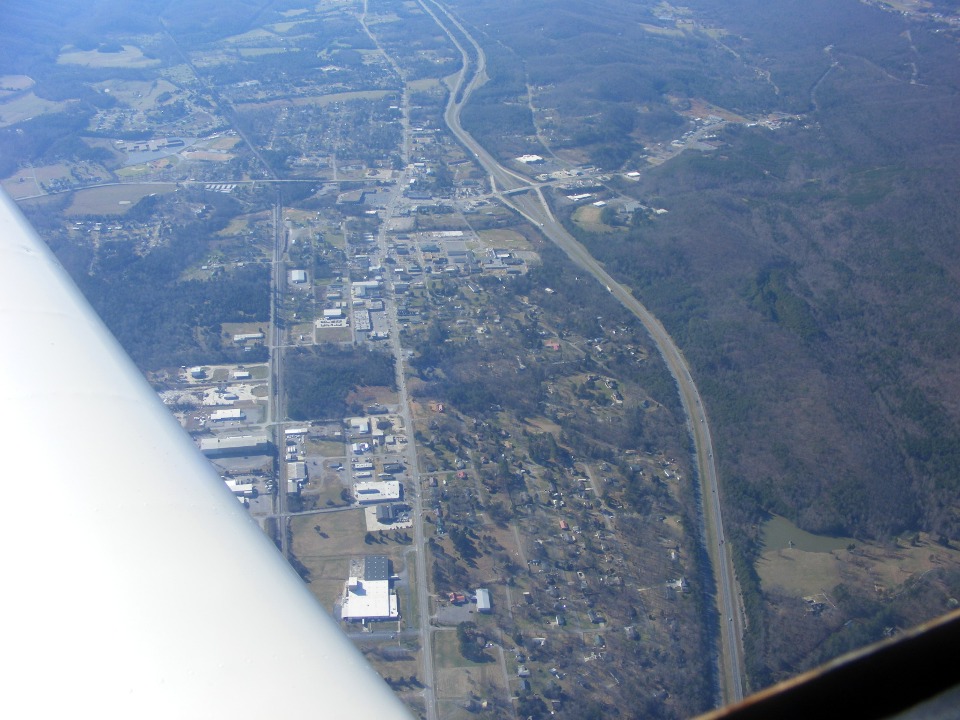 The air was indeed smooth at 4,500 MSL, but blowing hard against my desired route of flight.  I was loosing 36 MPH of ground speed to these winds.  You can see just how much I have altered my heading to follow my desired ground track toward Moontown Airport near Huntsville.  The cross wind component of 16 MPH is why I was pointing my nose to the left of my desired ground track. 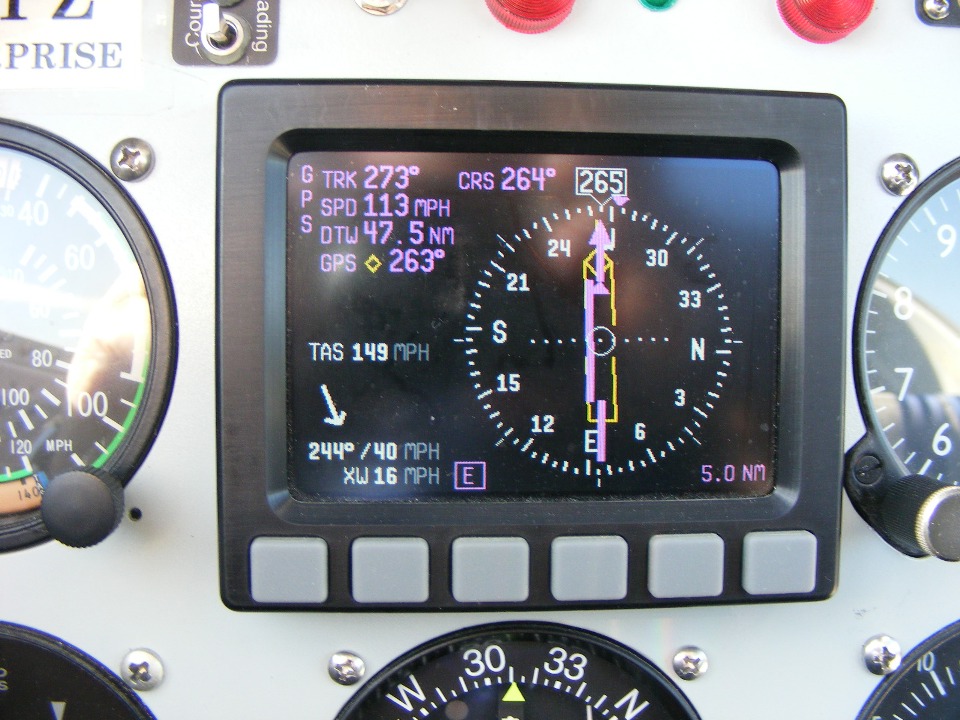 The view out the right side of the airplane is looking north, behind the wing at the Tennessee River as it makes the turn into Northern Alabama.  I used a bit of post-processing of this photo to minimize the haze.  After I took this photo at 4,500 MSL, I lowered my altitude to 3,500 MSL and found lower head winds along with a bumpy ride.  After I passed the last low mountain between me an the Moontown Airport, I got down to pattern altitude for the last six miles and the head winds were lower. 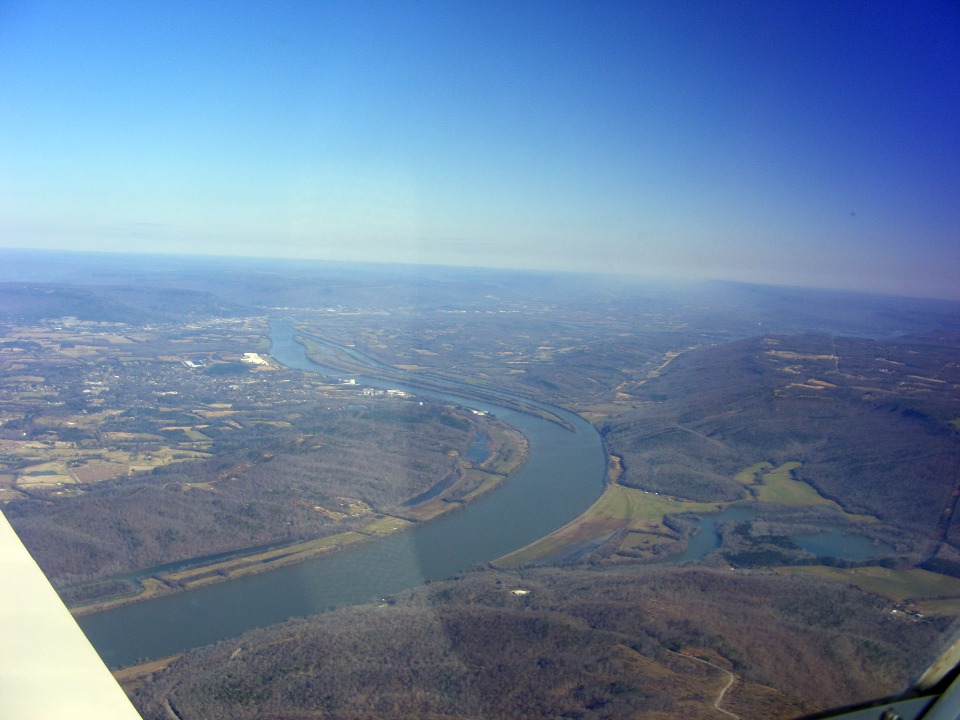 When I arrived at Moontown Airport around 11:30 AM Eastern Time, I was the only airplane in the pattern.  I again watched the winds aloft and found the winds at 13 MPH as I approached the runway.  I greased the landing with no bounce at all.  I spent over three hours with David today, including lunch at Jason's Deli on the west side of Huntsville on US 72.  I took a lot of additional photos of his RV-8 inside his hangar and have added those to his new pages in the OTHER RV SECTION of this web site. 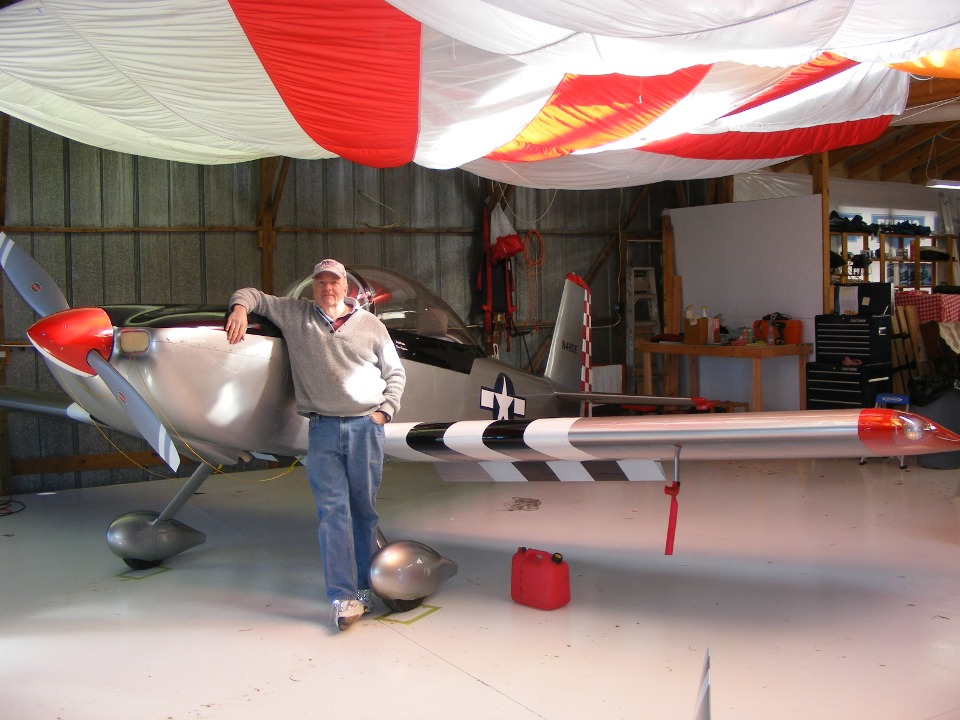 I made this photo to document that I really made the trip with my airplane to Moontown today. 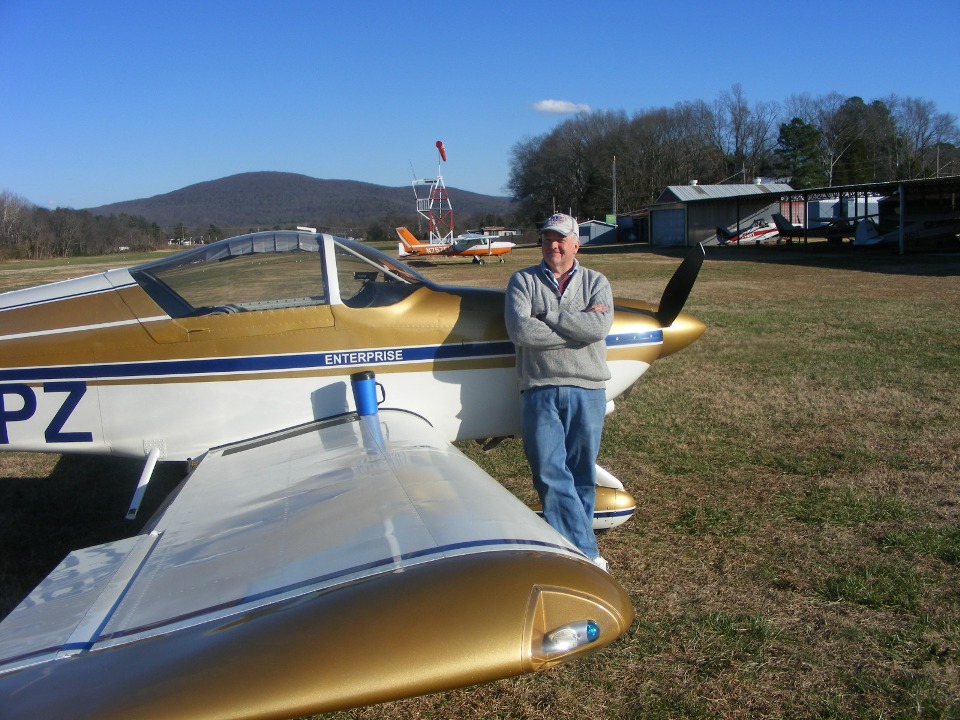 During my ride back home, the wind was still blowing about 25 MPH at the lower altitudes.  I tried climbing up to 5,500 MSL hoping to get better than 35 MPH tailwinds.  I discovered the smooth layer was above 6,000 MSL and I would not have much time to stay up there.  The return trip was going to be short.  I descended to 3,500 MSL, which was about 1,500 feet above the flat-topped mountains in this area.   You can also see the clouds marking the frontal area from the south have moved back to the north over the Chattanooga area.  It was during this part of the return flight that I noticed my autopilot would loose lock with the GPS data output.  I happened to check the Dynon during this intermittent outage and it was also not receiving data.   At that point I wiggled the data power plug on the back of the GPS and realized I have a bad connection there on the primary serial bus.  The Garmin GPS 296 has TWO RS-232 outputs that can be configured for different output protocols.  One more minor maintenance item to fix is now on my short list. 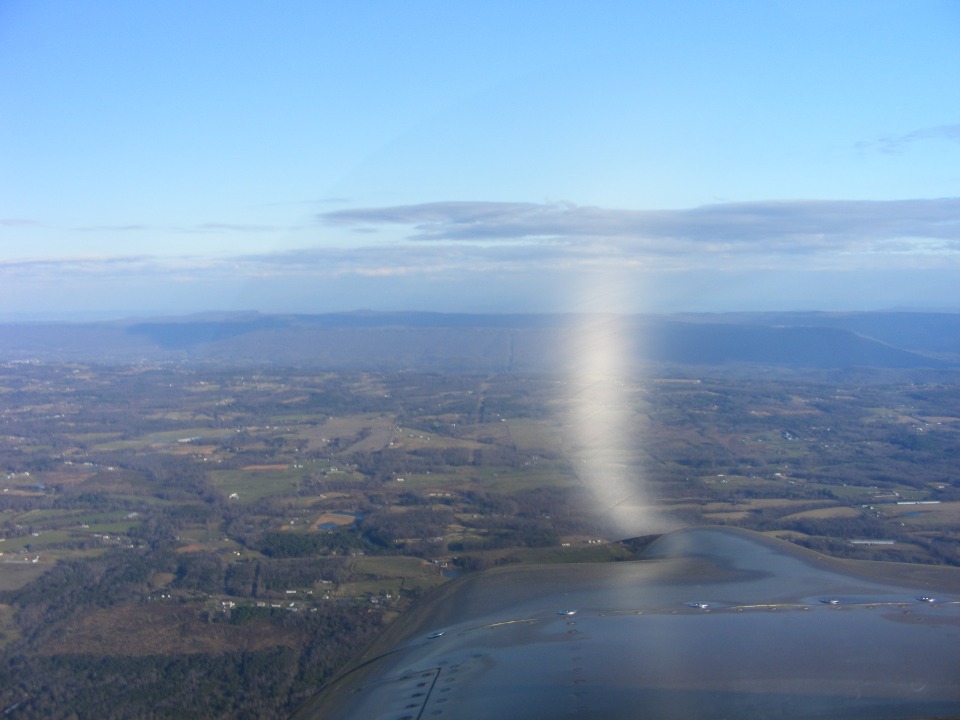 When I flew over Folks Field preparing to land, I had the Dynon D-10A screen displaying the winds aloft of 30 MPH from the SW at pattern altitude,  1,000' above ground level (AGL).  When I turned base leg to final at about 300 AGL, I made a quick check of the winds on the Dynon to see 15 MPH almost directly down the runway.  By the time I cleared the power lines at the north end of the field and started my final descent, the gusting winds stopped blowing so hard and I found myself sinking much too fast toward the runway.  I applied power, but the ground rushed up faster than I could power up to reduce my sink rate.   The airplane bounced hard on the mains and the nose wheel also took a hit right after the mains touched hard.  I knew I would be repairing some fiberglass fairings after that landing.  I applied a bit more power and stabilized the airplane after it bounced back in the air and completed the landing safely.  The only damage was the nose-bowl on the nose wheel fairing.   Of course my pride and ego took a hit as well.  It was a case of wind shear where I should have maintained more speed on the final approach.  The Hobbs meter added 1.3 hours today bringing the total to 289.2 hours.

In case you are wondering why I titled this page "One More Day of Flying in 2009", the weather forecast for the rest of the week is bringing rain back to the Chattanooga area again!

December 31, 2009:  The rainy weather is here with low overcast condtions.  As I said, no flying on this last day of the year.   I brought home the nose wheel bowl and fairing from the airport yesterday and started to repair it today.  The pieces are glued together with some super glue before I provide the real repair later this afternoon with several layers of fiberglass cloth and epoxy inside all the fractures.  I have some very light weight glass cloth that will probably be added to the outside of the cracks.  After that, it will be some sanding, filler, and sanding smooth before I get the nose bowl repainted. 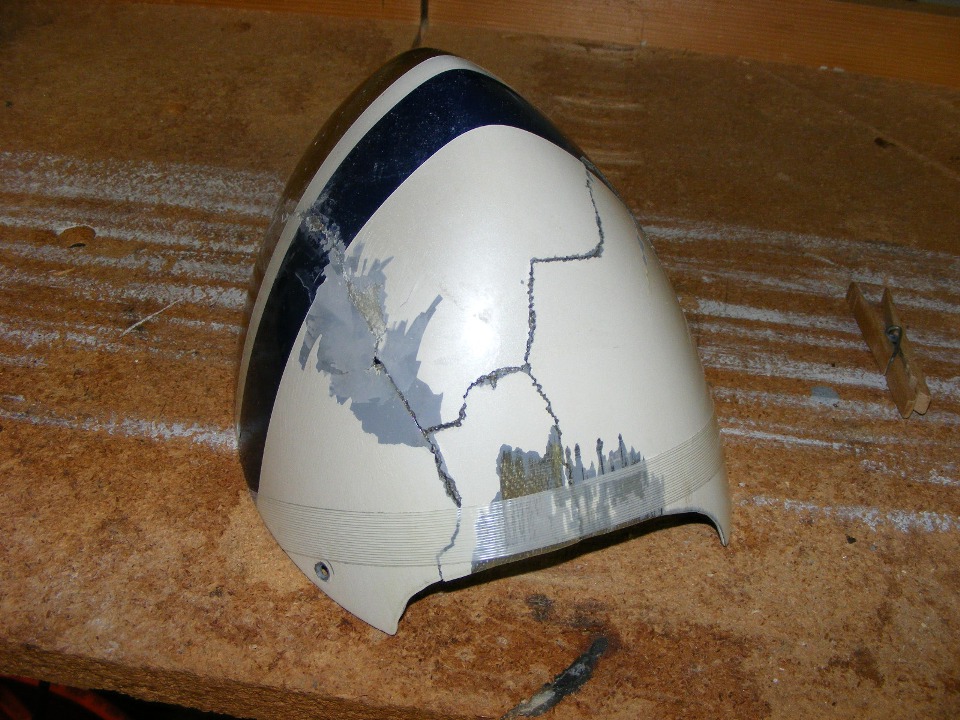 January 17, 2010:  The fiberglass repairs to the nose bowl seen above were completed and it has been returned to the airport.  It now has several layers of new fiberglass inside bonding the sections together again.   After those sections inside were fully cured, I removed the tape from the outside, ground off the paint and primer along the fractures and put a layer of fiberglass on the outside.  When all that had cured for a few days, I used my Dremel tool with the sanding drum to smooth the surface.  It will need filler and more sanding to accept primer and paint when the time comes.

I have been talking with the guy who painted Wendell's airplane to see about getting my parts painted.  The rest of the nose wheel fairing has a number of scratches and chips in the paint, so having them both done at the same time will assure they match.  The weekend weather has been lousy since the first of the year.    There have been no flights to report here.  As usual the best weather days are during the work week when I am at the computer and on the phone with customers.   The forecast for NEXT weekend may have ONE day to fly, IF the weather is clear next Saturday.

January 24, 2010: Sunday again and all it did today was rain.  The low overcast conditions and high winds from yesterday gave way to the rain that came last night and through most of today.  I did get to the hangar yesterday and took this photo of the repaired nose bowl.  I have not heard back from the painter with any kind of estimate of paint costs for these pieces.   I took both pieces of the nose wheel fairing to a Sherwin-Williams store to see about getting a suitable matching paint for touch-up work, but only one S-W store in Chattanooga does that and they close early on Saturdays.  David Edgemon told me I could get the paint to at least hide the fiberglass repair after sanding it smooth. 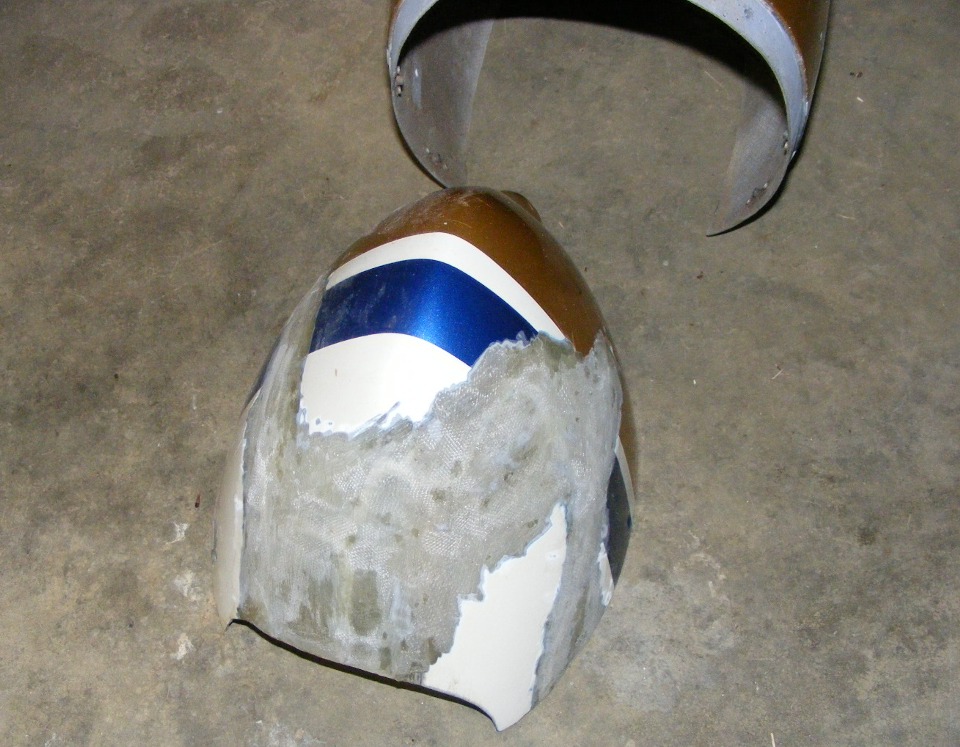 January 28, 2010:  Here is a photo of a couple of items I found on Ebay when the end of analog television over-the-air broadcasting made these things less valuable.  I got the Tektronix 1910 NTSC video generator several months ago for $29 plus freight to get it to me.  The Tek 1480R came this week for $35 plus freight.  The 1910 works perfect.  It had some cosmetic damage on the mounting ears that was easily fixed.  The 1480R has one plastic knob with a crack in it and one button that needs its contacts cleaned.  A little bit of super glue fixed the knob. Then I have to find out if the button contacts can be cleaned easily or just need to be exercised a few hundred times.  Back in the 1980s, I had both of these instruments on my test bench when I worked for a satellite equipment company that installed uplinks and downlinks for CATV systems and TV networks.  I also found the maintenance manual online for the 1480R at a reasonable price.  It has all the schematics and alignment procedures, but this thing is working very well, no internal calibration needed, just the normal front panel adjustments. 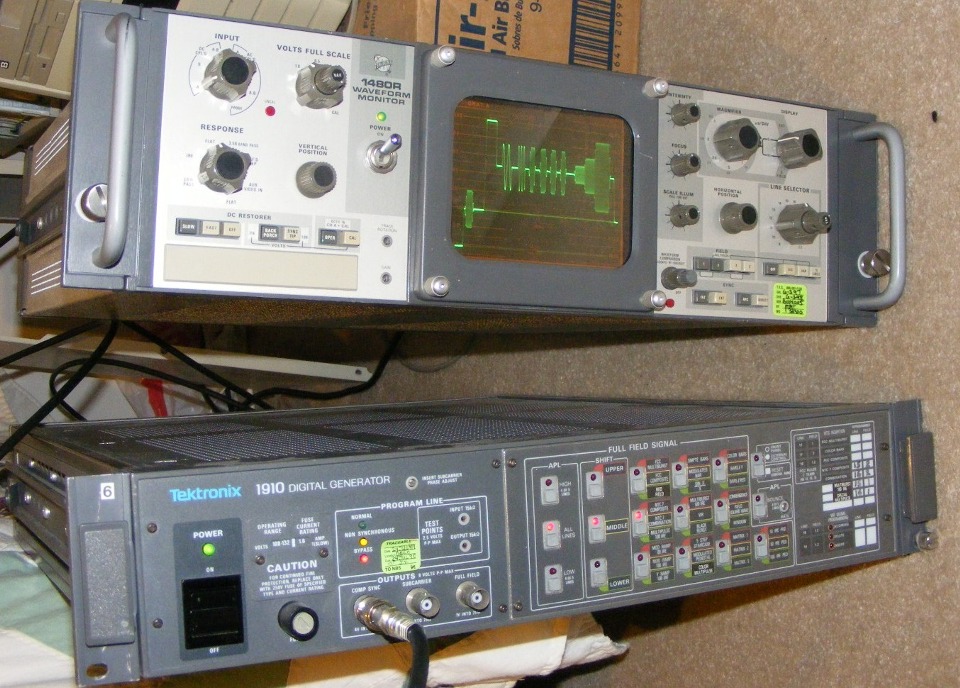 By now, you have been reminded that my day job is in broadcast and CATV communications.  These toys are for me.  Oh, did I mention I got an old HP spectrum analyzer fairly cheap a few months ago?  It goes to 1,500 MHz, which covers broadcast and CATV frequencies, plus satellite L-band RF output from most low-noise block converters (LNBs).

As for the weather this weekend, a winter mix of rain and snow is expected for Saturday.  Clear weather is expected for Sunday, but bitterly cold.  I don't think the airplane is going anywhere.