January 30, 2010: The first real snow for 2010 came to Chattanooga yesterday afternoon.  A few flurries at first, then it got serious about an hour later here along the Tennessee/Georgia state line.  The first hour saw accumulation only on the grass and parked cars.  The pavement in the street was too warm, melting the snow as it fell.  By hour three, the street out front was covered and a few tire tracks were also filled in with the light snow that continued to fall.  Right before sunset, the parked cars had about 3 to 4 inches of snow on them.   By 11 PM when I was heading for bed, the snow had changed back to rain and the streets were nearly washed clean.

This morning (Saturday) I went out to the airport to get my Dremel tool from the hangar and took a few photos when I was parked in front of the hangar.  It was clear Wendell was not out in his car, there were no tracks on his driveway, just slushy snow in the process of melting at 35 degrees.  I was careful when I parked in front of the hangar due to the slippery conditions.  I have not asked Wendell how deep the snow was at its worst.  You can see it is melting away by the way the grass is peeking through. 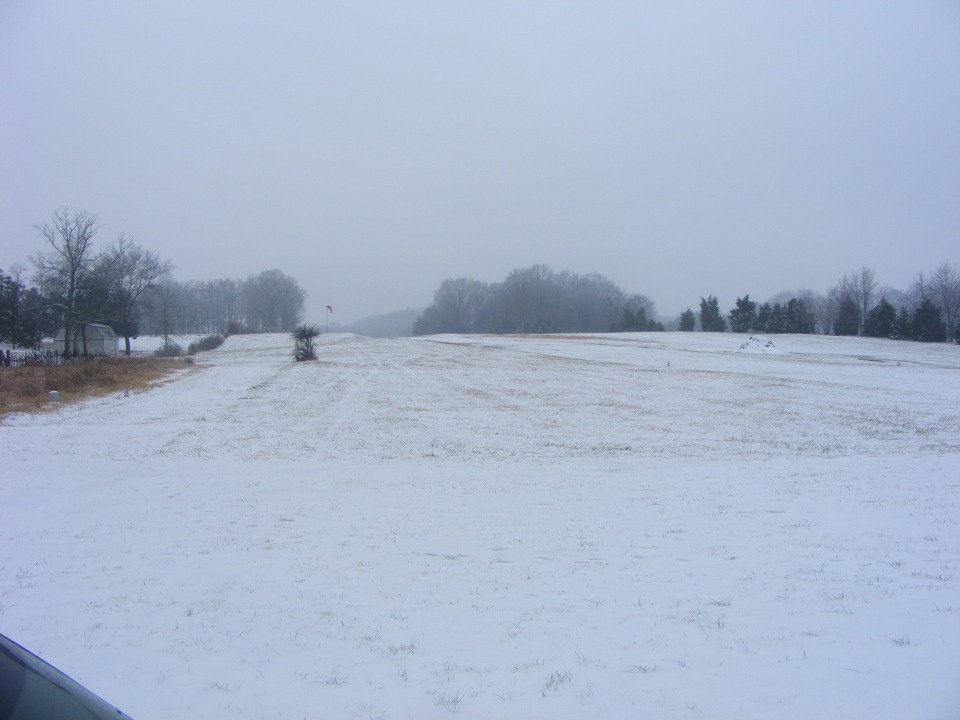 This telephoto shot shows the only "color" in this scene is the wind sock. 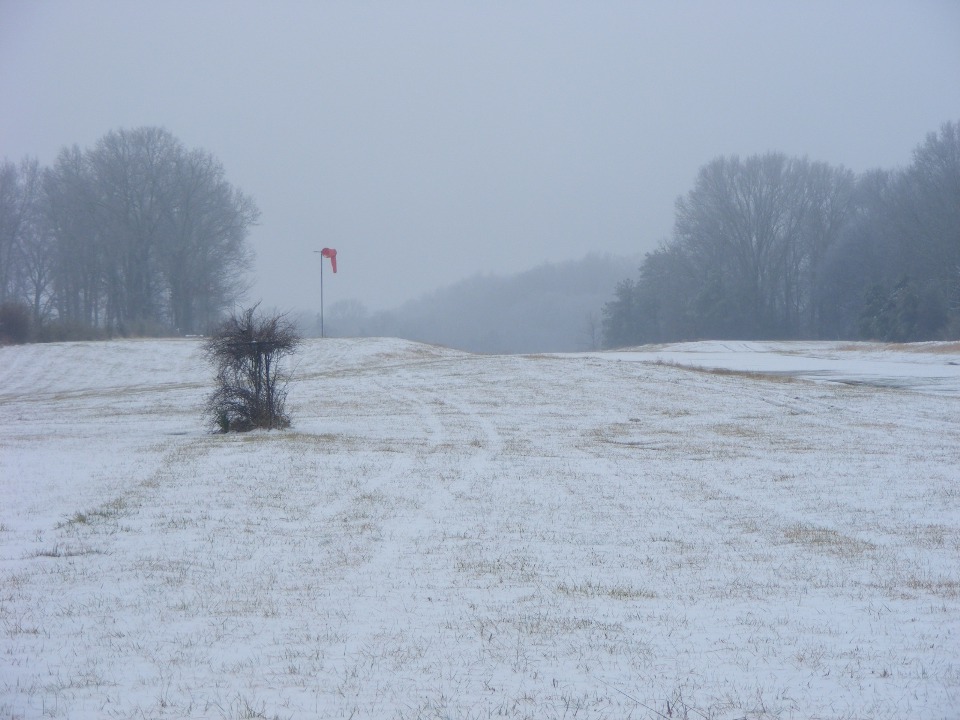 The snow is beginning to melt enough to slide off the hangar roof. 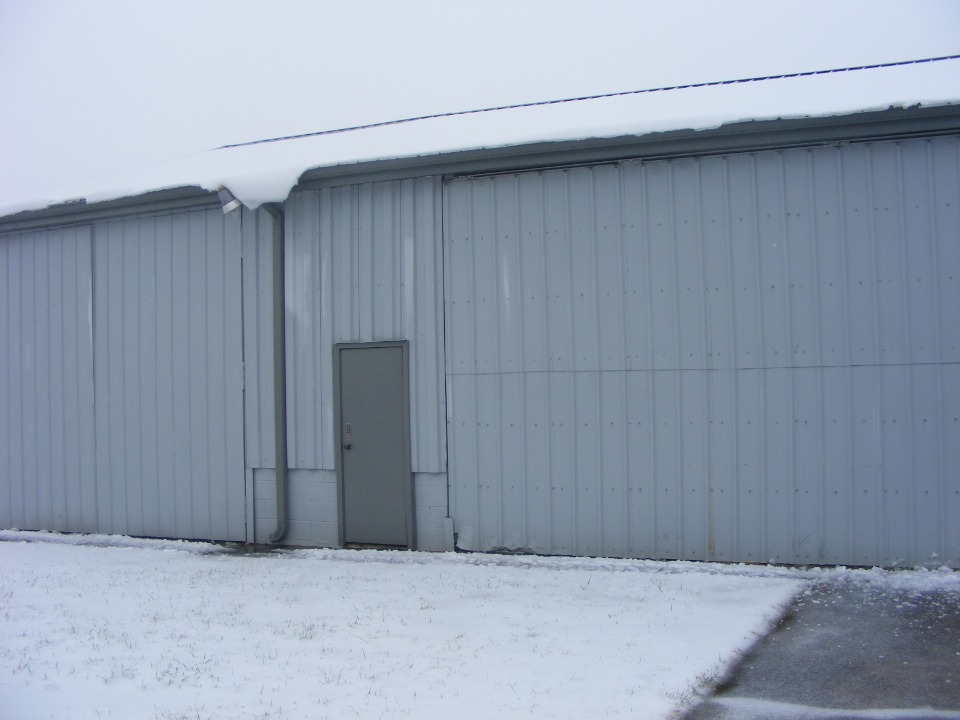 The view looking toward the house and road shows the slush on the driveway and the ramp in front of the hangar is slippery indeed.  The weather tonight is forecast to get down to 20 degrees F.  It is 34 degrees as I write this at 6 PM.  When we get the hard freeze, any roads that are wet will turn to ice and that spells trouble. 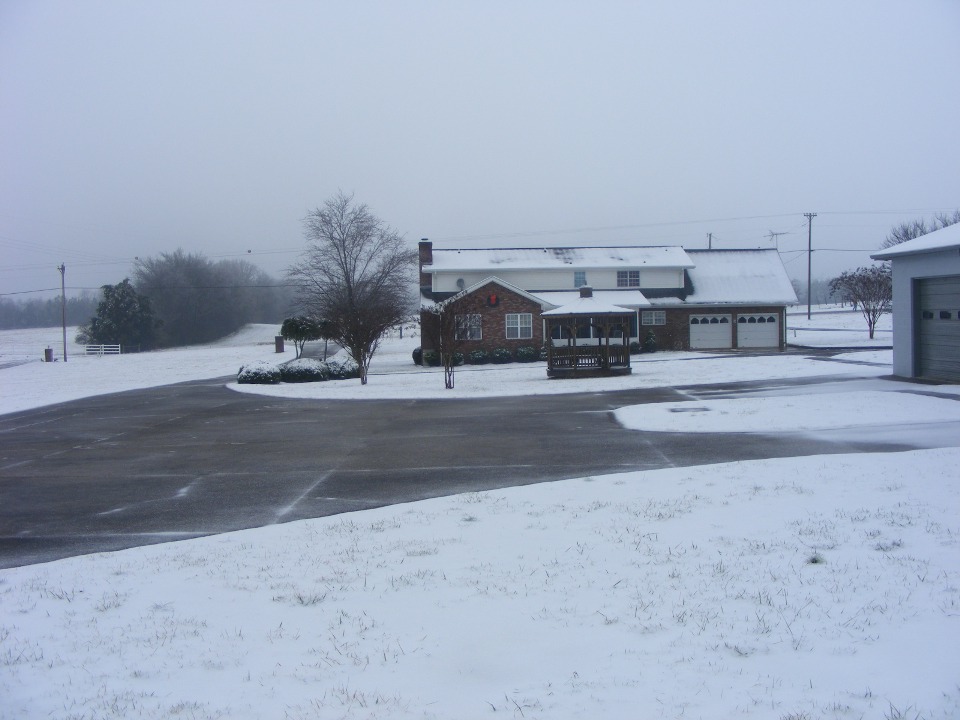 It is supposed to warm up tomorrow to 41 degrees with a low of 22 tomorrow night.  For Tuesday, Wednesday and Thursday, high temperatures in the 40s and 50s with the lows around 30 to 35 degrees F.  The early forecast for next Saturday is looking good, but I don't hold my breath on that one.  We shall see as the week progresses toward next weekend.

My retired Navy pilot friend Marty called me yesterday to ask if we got snow here.  I told him the story and that we don't get to go flying this weekend due to the weather.  We shall see when the next good flying days will come along.   Patience Obi-Wan.  May the force be with you.

February 21, 2010:  It is Sunday again, and I need to catch up on what has been happening.  No flying.  I left for Florida on Saturday morning, February 6th for a week in "warmer" weather.  I say that since it was spitting mixed snow and light rain when I departed the Chattanooga area that morning.  The weather did not clear up until I got into central Georgia.  It was still quite chilly all the way to my destination.  The week I was gone I saw the weather reports and talked to some friends back here about the weather -- SNOW, but not too much.  I did my day job from down there and managed to see my dental hygienist for a cleaning while in Florida.  All was good due to the new WaterPik I use every day to keep those nasty bugs from getting under my gums, etc.  I returned on President's Day, February 15th.  I managed to take a few photos going each way up and down US 41 for my long-term project documenting the highway in a book for those of us who feel the journey is sometimes better than just getting there.  I plan to supplement my ground photos with appropriate aerial photos when conditions are favorable.

Saturday, February 20th was the first GOOD weekend weather in the Chattanooga area since I left town and returned.  I went over to the field to find Wendell with a few friends over as usual, including a couple of airplanes that flew in to visit.  I put my nose wheel fairing back on my airplane.  Wendell's RV-8 is up in a level position as it is out of service for annual conditional inspection.  I did not ask him to move the airplane to get mine out for any flying.  I went off to help a friend with his computer for the rest of the day.

On Sunday, the weather was again good.  I took advantage of the nice weather to get some local photos of attractions near US 41 for the project mentioned above.  I stopped by the hangar in the afternoon to remove my cowling and check the serial numbers of my cylinders of my ECI engine.  There is a mandatory airworthiness directive (AD) on those Titan cylinders.  Depending on what your numbers are, you can fall into one of TWO groups.  Group A turned out to be my engine cylinders requiring compression tests every 50 hours until 2000 hours TBO at which time they will be replaced.   Each oil change will get cylinder compression checks whether it is annual inspection time or not.

Here is how the hangar looked with Wendell's RV-8 out of service for now. 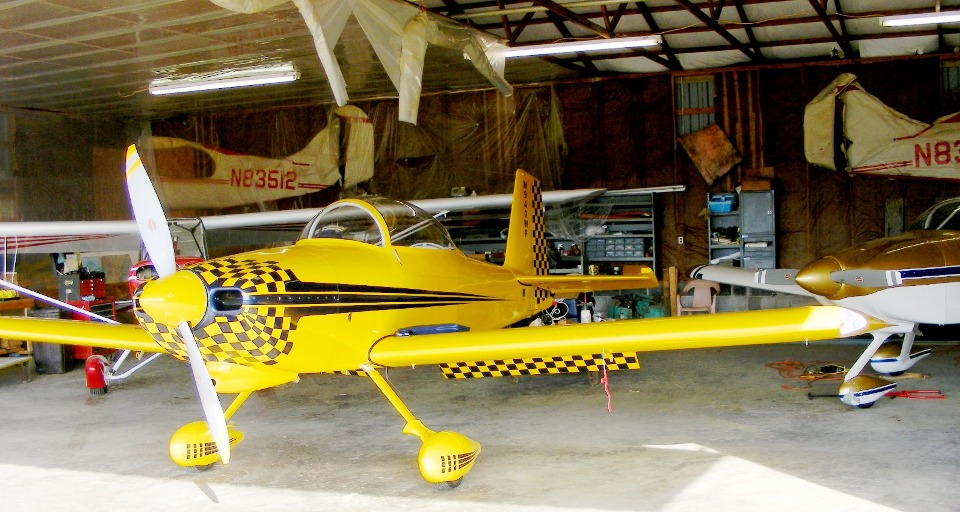 Here is a side view of Wendell's airplane showing the support for the tail wheel and some of the removed seats, etc. 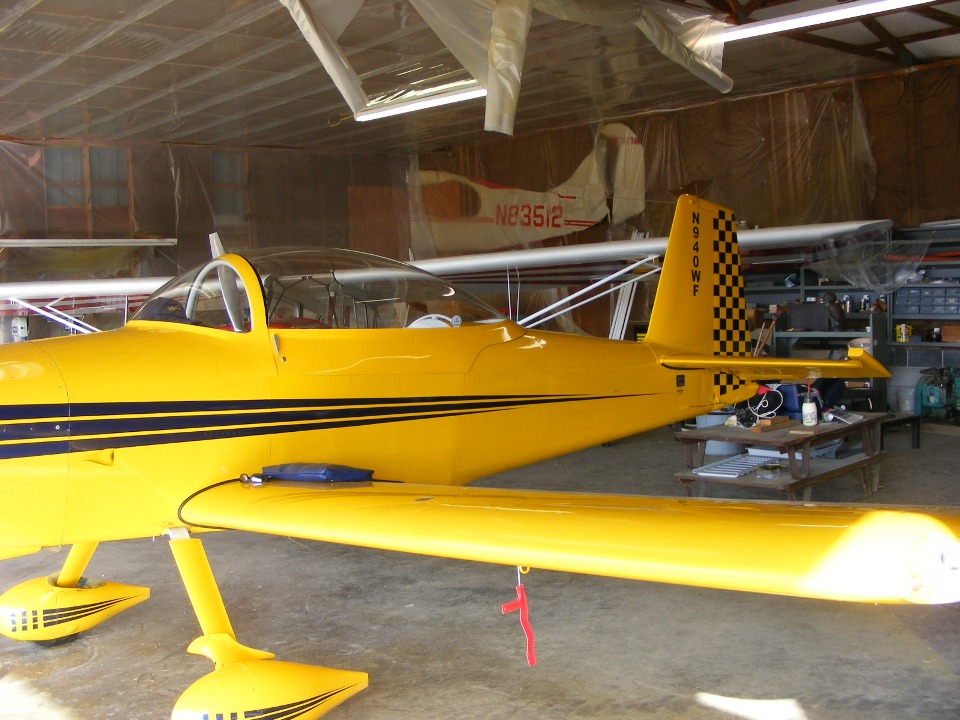 I pulled off the cowl and removed some of the bolts and screws holding my engine cooling baffles to cylinders 2 and 3 to check the serial numbers stamped on the heads.  This is the full photo showing the number on cylinder number 3. 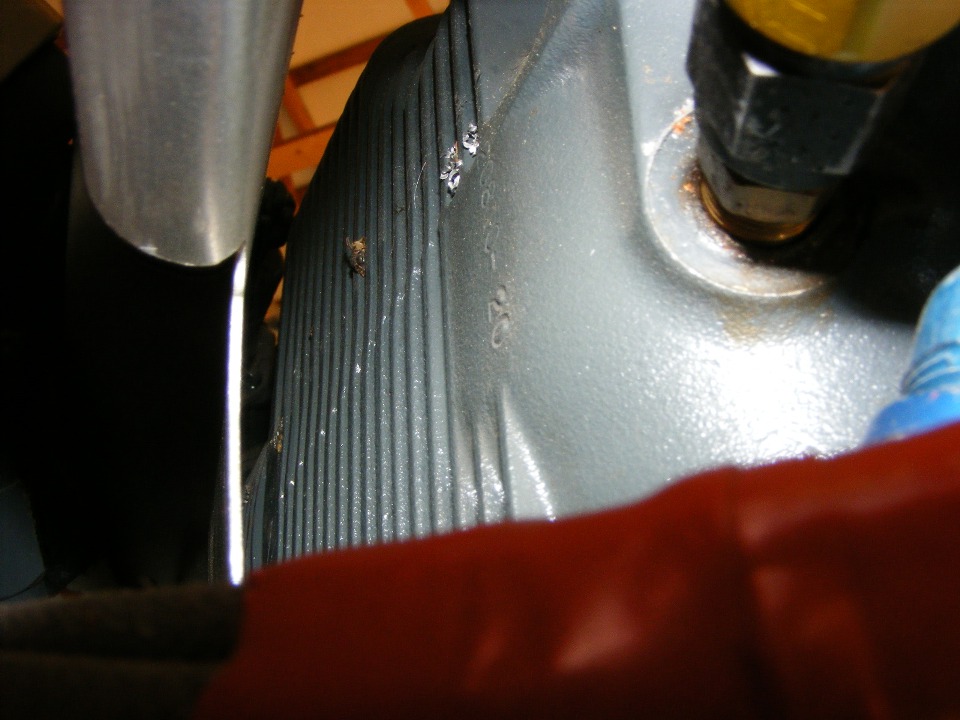 I processed the photo to get a better look at the serial number for cylinder number 3.  It is stamped 20810-20 and puts me in Group "A" for the AD.

Here is stamped head of the front cylinder number 2 which was easy to read the serial number by pulling back the cooling baffle. 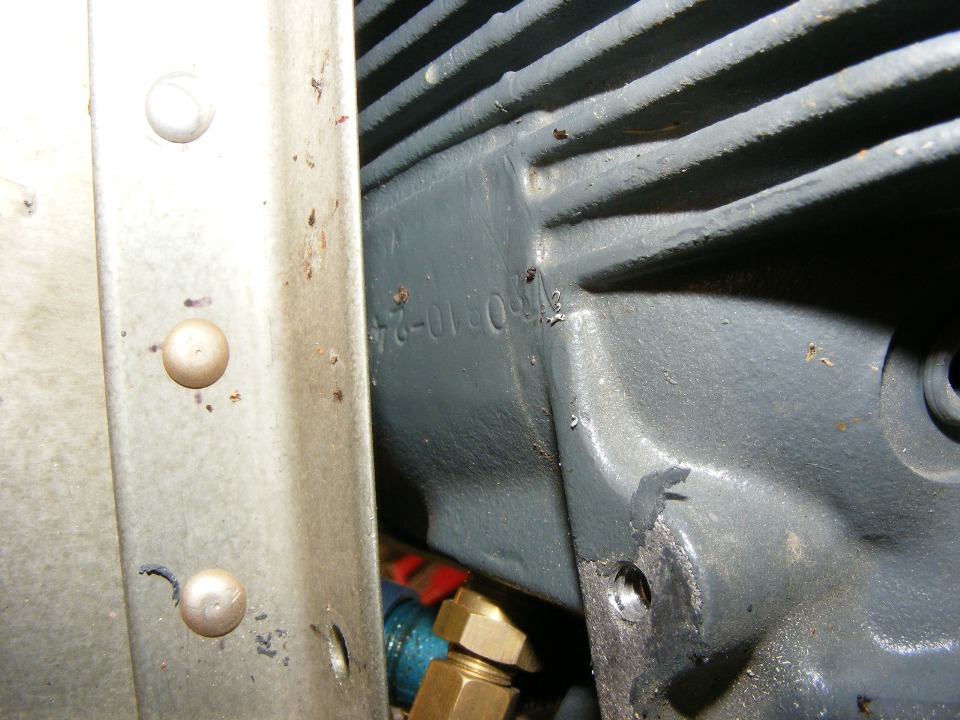 Here is the number flipped around in the photo to make it readable as 20810-24.   I will have to go back to the hangar with a candle to put hot wax on a thin piece of cardboard.  I can slip the warm wax and cardboard in the 1/4-inch gap between cylinders 1 & 3, and 2 & 4 to get the numbers off of cylinders 1 and 4 since there is no way to see them directly.  David Edgemon reported success with the technique of taking wax impressions of the numbers on a cold engine.  He rubbed the back side of the cardboard, pressing the warm wax side against the numbers. 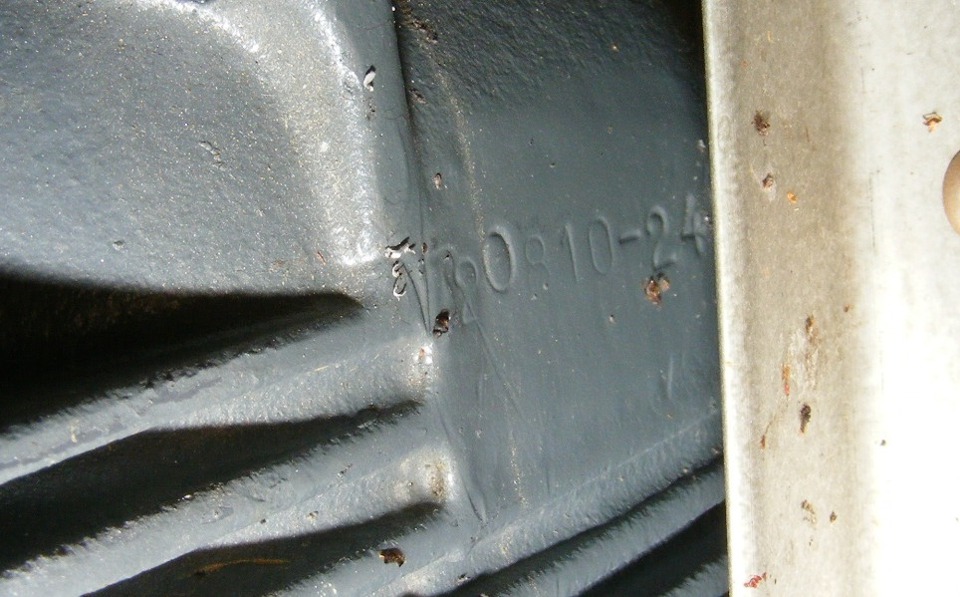