November 7, 2009: After departing Love's Landing from runway 9, it was a very short flight up to Silver Springs Shores, a community southeast of Ocala where I worked from 1978 to 1989.  The little village of Candler, Florida is directly below my airplane in this photo. 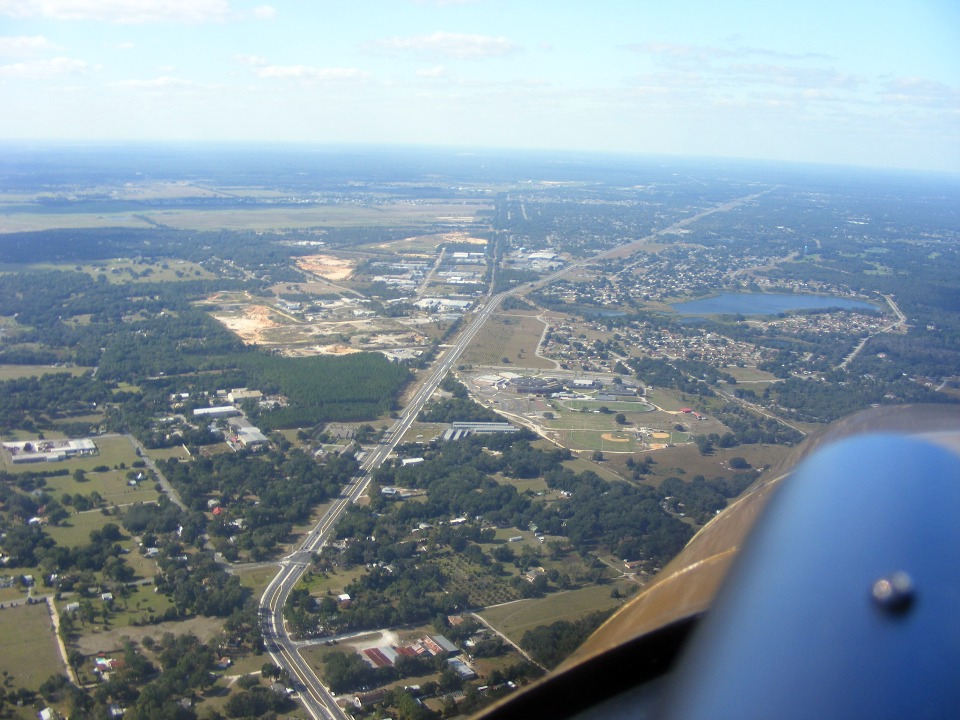 The three buildings off the wing near the water tower were the home of Microdyne Corporation when I worked there.  Look at the road that winds from the bottom of the photo across to the residential area beyond the main highway.  Of the three buildings, the one closest to the road is the first one built in 1978.  The entire company was in that one building for a while before the need for expansion added the building to the left, and later the one closest to the water tower just beyond the first two.  The air was bumpy at this altitude, resulting in a less than good focus in this photo.  That long green area next to the road running from right to left is full of high-tension power lines.  It is not a runway. 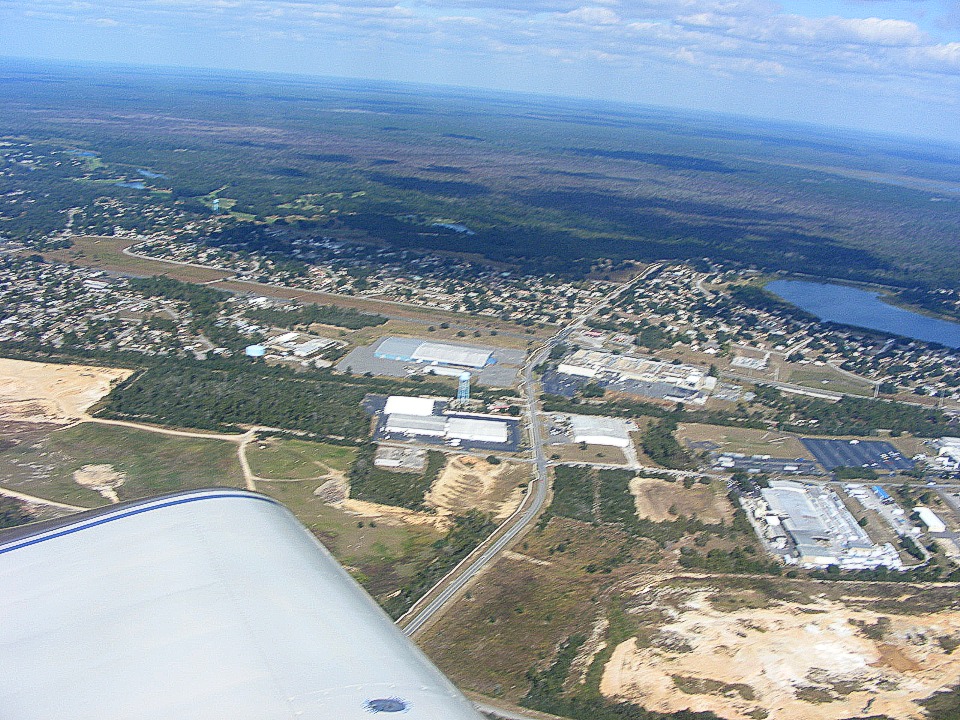 Although it does not show in the photo above, there is another private airfield almost directly under my airplane as I took this photo.  It is known as "Back Achers" and was built by a chiropractor.  I noticed some of the airplanes I had seen over at Love's Landing were parked down there.  I used to own a house about two blocks from that little airport located on SE 110th Street Road.  See the map below showing my GPS ground track over this area.  I circled this area on the way north.   The other track was my descent toward Love's Landing. 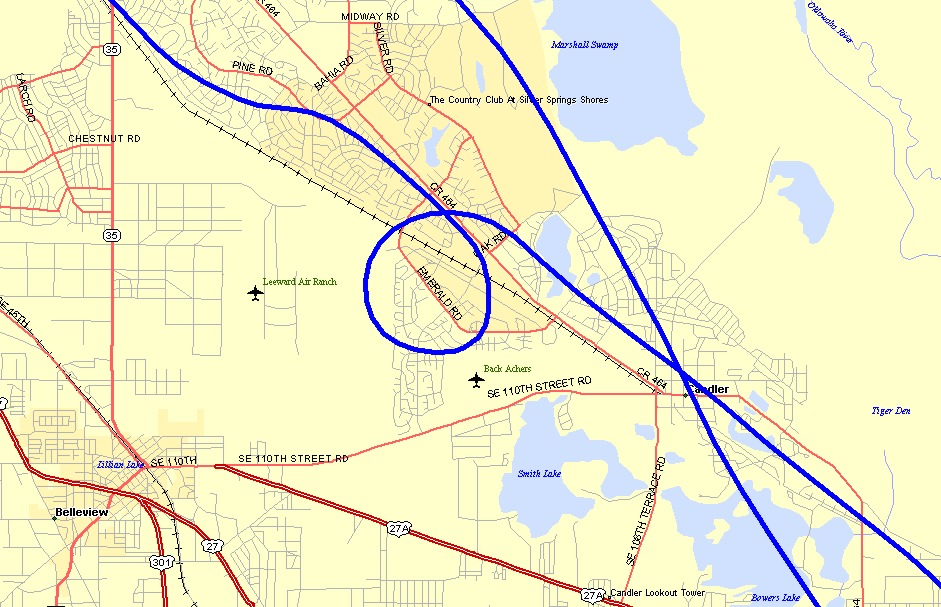 I headed away from the "Shores" as we called toward the city of Ocala and started my turn north, again avoiding the restricted airspace to the east of Ocala in the national forest.  This time, I was taking some photos of the airport where John Travolta has his home and his airplanes.  The city of Ocala is to the left of this photo and not shown. 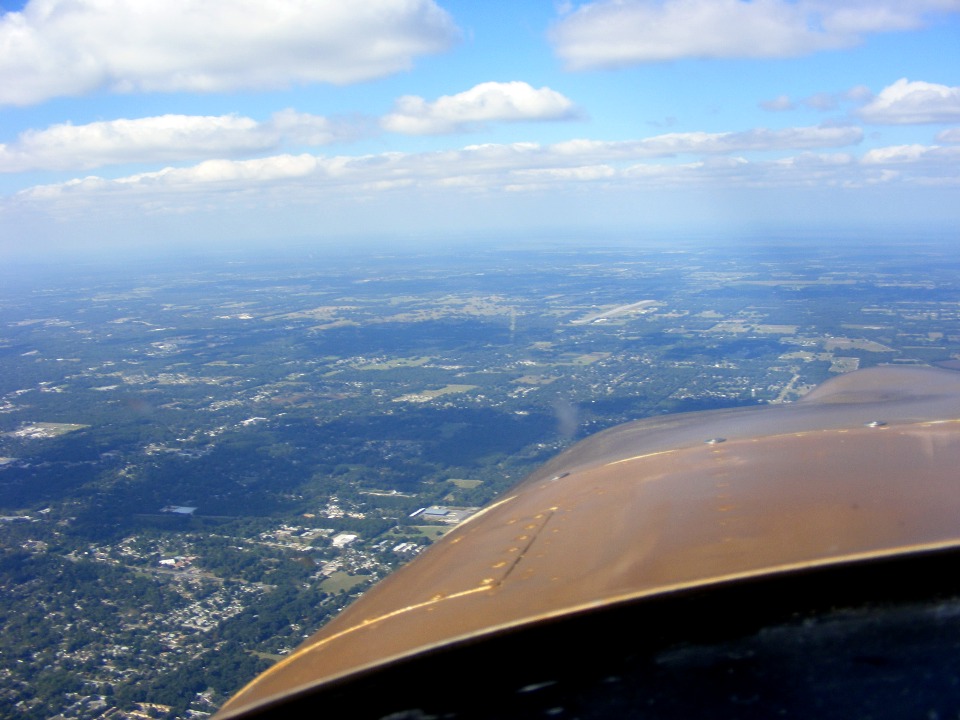 Here is a closeup view looking NW showing the Greystone Airport north of Ocala near the village of Anthony, Florida.  The main paved runway is aligned north-south and 7,550 feet long.  For more details use this link http://www.airnav.com/airport/17FL.   There is also an east-west grass runway here.  That turnaround at the south end has an angled blast wall to prevent any passing cars from being blown off the road by John's Boeing 707. 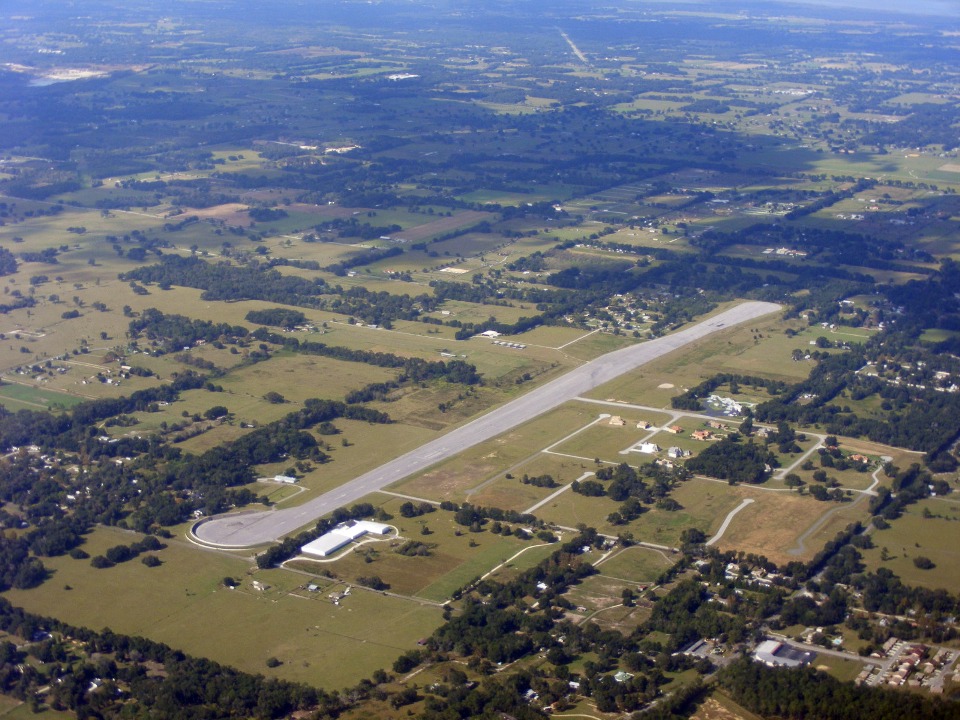 I climbed above the scattered cloud layer to get into smooth air for the ride to Hazlehurst, Georgia for my fuel stop on the way home.  The cloud patterns show the winds from the Atlantic Ocean blowing westward.  I had a cross wind at this level also. 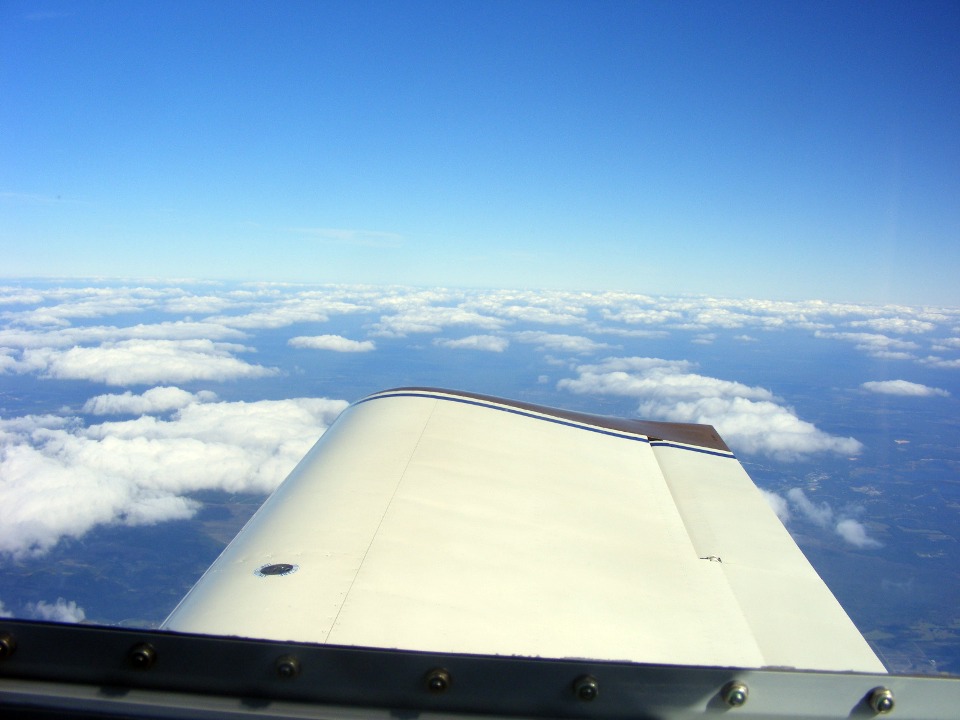 The farther north I flew, the greater the distance between the clouds. 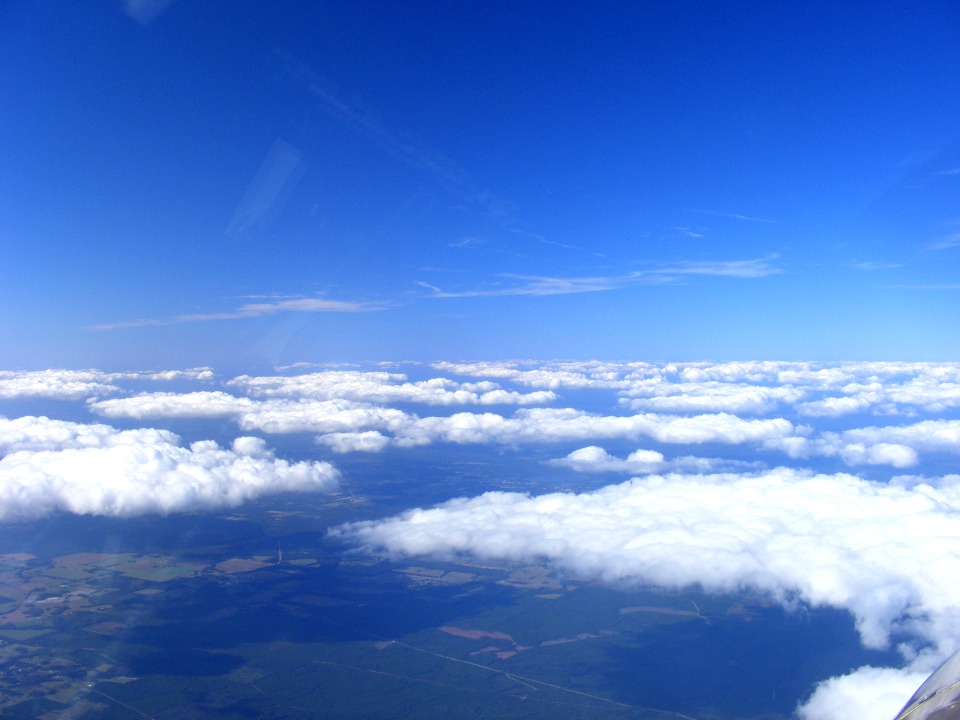 In south Georgia, the clouds gave way to haze conditions as seen here at Waycross, Georgia.  That is a railroad yard near the center of town. 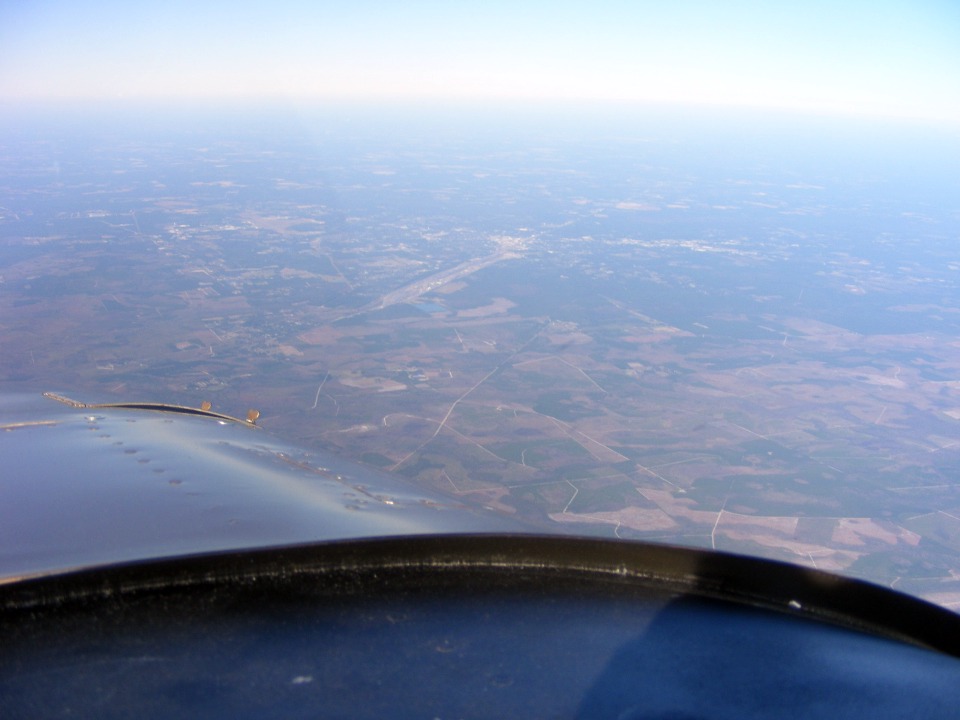 That white spot in the center of that circle below is the Waycross VOR located about 12 miles from town and less than 10 miles west of the airport.  That four-lane highway is US 82 west of Waycross.  One of the railroad lines is almost parallel to the wing leading edge. 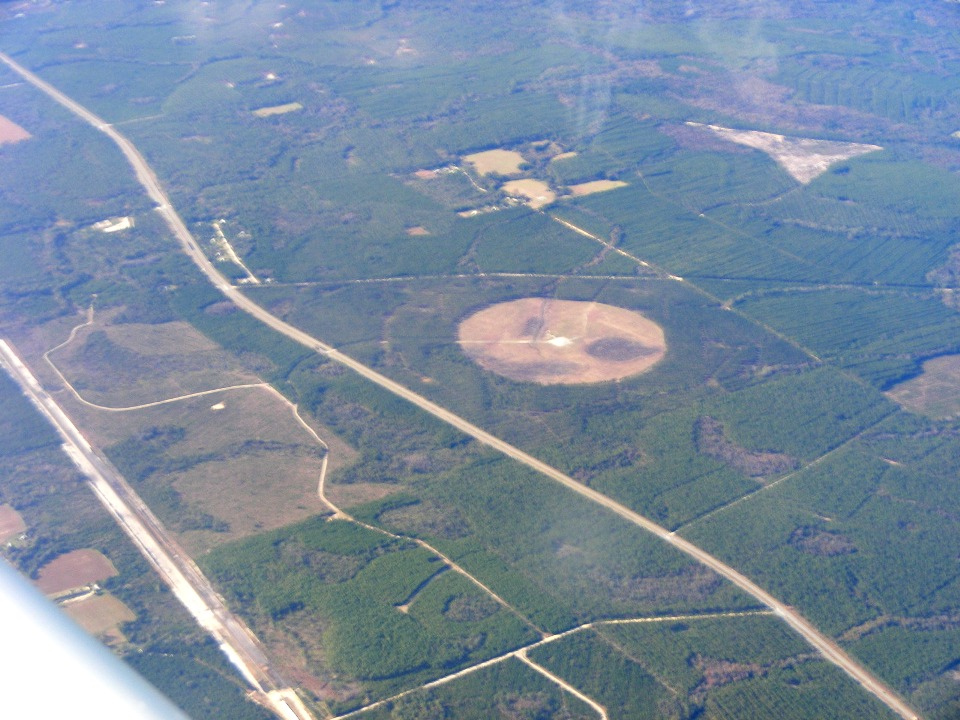